When it comes to the world’s fauna, we simply can’t stay indifferent to its wonders. For instance, amphibians are fascinating animals, mainly due to their dual lives. They live in the water for a long period of time, while the other half is for land survival. Their skin is porous, which requires a lot of moisture during their existence.

On the other hand, reptiles are a group of animals living only on land; they breathe through the lungs and multiply by eggs. Reptiles have some scales on their body and live to retain moisture. So, at first glance, the main difference between reptiles and amphibians is their physical appearance and lifestyle.

However, during the study of the animal kingdom, people have found a lot of similarities between these two species. This was the main reason why researchers didn’t establish correct zoological classification between them. While their camouflage for protection, identical features, and ectothermic (cold-blooded) bodies are similar, there are many differences between reptiles and amphibians.

Biologists found that reptiles supposedly descended from amphibians millions of years ago. Amphibians turned to be reptiles due to the change in the environment and the natural evolutionary process. These animals are also thought to have similarities with fishes and terrestrial snakes. As such, science considers amphibians to have migrated from sea to land.

Now, another thing that you should know about this topic is that there is a special zoology branch that studies both amphibians and reptiles. The work of these scientists is continuous.

Thus, let’s discover what science has to say about the main differences between reptiles and amphibians along with some interesting similarities between the two species. 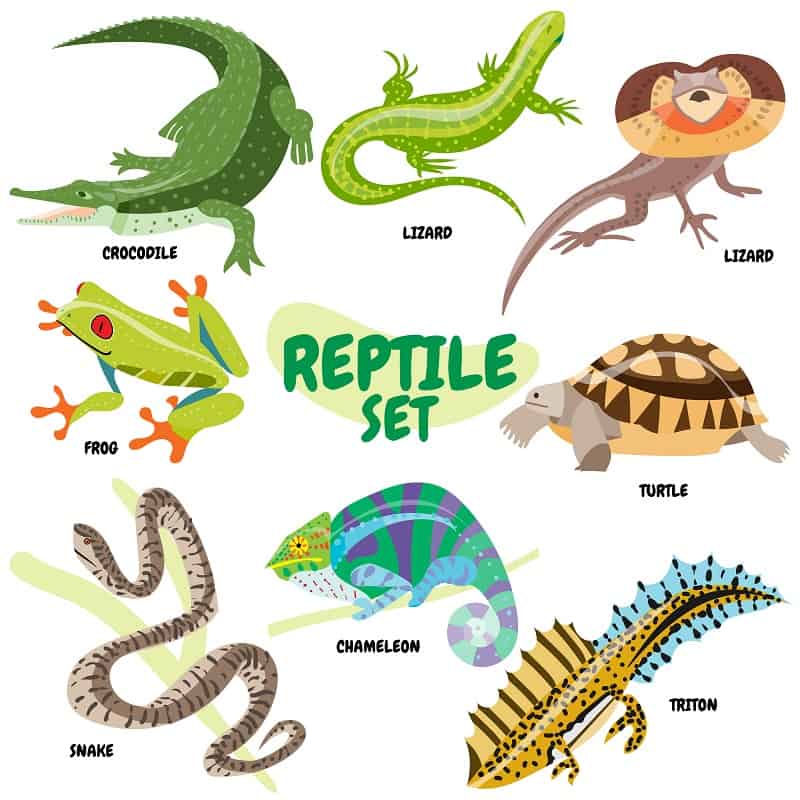 I suggest we take it slow and go through each interesting part step by step.

Amphibians are cold-blooded animals, ectothermic, that are living on both land and in water. To breathe, Amphibians use gills while they stay under the water and lungs when on land.

On the other hand, reptiles are also ectothermic animals with cold blood that are mainly living on land. The reptiles can be oviparous or viviparous.

As previously mentioned, amphibians live in the aquatic world. However, they can quickly adapt to the land environment. During the larval stage, they spend their time in the water. During adulthood, they stay on the land. (Examples of Amphibians: frogs, Salamanders, Toads, etc.)

Looking at reptiles, it is easy to say that they are terrestrial animals. However, some of them you may know, like turtles, crocodiles, or alligators, prefer the water living as well. (Examples: Crocodiles, Lizards, Snakes.)

Also Read: What Do Crocodiles Eat? How Do These Large Semi-Aquatic Reptiles Feed?

Amphibians are creatures that multiply through eggs, meaning the baby embryos develop step by step inside the egg. Eventually, the eggs are hatched outside the mother’s body. The fertilization process is external.

Reptiles can be either oviparous, or viviparous. This means the embryos will develop inside the mother’s womb. The fertilization is internal.

Let’s dig into more details about the reproductive system of these two species. Now, the most significant difference between reptiles and amphibians is how they fecundate and enter this world:

Some of the rainforest species of Amphibians will lay their eggs in the water throughout the year, while other ones breed at the exact time once a year in mass. Right into the eggs, some tiny tadpoles will start developing and break all free.

Reptiles are different from amphibians due to their skin as well. The structure, moisture, and biology of their skin are not the same at all.

But when it comes to dry, rough skin, newts and adult toads have crispy skin. Amphibians can breathe all through the skin but in a passive way. The skin breathing goes along with the active breathing through the lungs. The mucus on the skin is essential, and the wax Amphibians secrete on their slimy skin. Both wax and slime are the main factors that help the skin have natural moisture which is necessary for the oxygen transfer to the blood cells.

Reptiles also have the same type of heart; however, the ventricle is more divided through a certain septum;

Reptiles have some hard scales for their protection all through their skin; furthermore, snakes can produce toxins through their teeth and nails;

Reptiles, on the other hand, have dehydrated skin that is hard and scaly so that it can protect them;

Reptiles lay their eggs on the land and cover them as well with a protective layer.

Most reptiles have four limbs, which are the most significant feature for running or swimming; however, there are also reptiles such as snakes that do not have limbs, so they crawl;

Similarities Between Amphibians And Reptiles

Now that we know the main differences between amphibians and reptiles, let’s move on to the similarities between these species.

One of the main similarities and most crucial defense methods for reptiles and amphibians is the toxic compounds. yet, the delivery method is different, and the two species use toxins differently.

When it comes to reptiles, most of us would think about venomous snakes. And we are perfectly right. Most of the serpents that have venom are venomous snakes. However, some lizards have venom as well. Venom is one of the scariest liquids in this world, a toxic substance that contains proteins and which is stored in the head glands of a snake or a venomous lizard.

Some of the most venomous snakes are vipers, cobras, or colubrids. However, Gila monsters, Komodo dragons, or beaded lizards are also evil.

Researchers have found that venomous compounds in the saliva of lizards or other species might have medical properties. Thus, the evidence is unclear yet.

You can recognize the most toxic Amphibians by their bright colors. These bright shades will tell the predators that these animals are very poisonous and should stay away from them.

While Amphibians will keep the poison in their skin to keep the predators away from them, reptiles use the poison to subdue prey.

So many similarities, but so different species

Now that we know most of the facts about Amphibians and Reptiles, it’s time to draw some conclusions. Both of the species are ectothermic and vertebrates. Moreover, they are even biologically similar.

However, the Amphibians and Reptiles are pretty different, although they share very similar habitats.

Both types of animals have evolved through time and adapted their way of living to the microhabitats they live on. Humans have to help these animals conserve their lives and reduce the harmful impact on their environment from now on.

Are Reptiles Cold-Blooded? What Do Ectothermic Animals Do To Survive? - Coachella Valley Preserve

[…] Reptiles vs. Amphibians (Major Differences And Similarities To Know) […]