There are a surprising number of animals which can look a lot like beavers, especially when you’re out in the field and you don’t get a good enough view for a positive ID. Several species of mammal have adapted to freshwater environments and become semi-aquatic. Perhaps you hear a splash, see a fluffy brown shape moving through the water. But how can you be sure which semi-aquatic mammal you saw?

We are going to help you identify beavers and 7 of their most common lookalikes in the wild. We’ll take a closer look at the characteristics and key features of these brown-furred mammals, and discover what marks them out from beavers.

Beavers are large and stocky, with webbed rear feet and a paddle-like, scaly tail. There is often evidence of felled trees and chewed branches found in habitats they are present in. If the animal is carrying a branch in its mouth it is likely to be a beaver.

When identifying semi-aquatic mammals in the field, look first for the tail. Is it wide or narrow? Does it have fur on? Is it scaly? Second, is the fur soft- or coarse-looking? Does the body of the animal look stream-lined or rounder in shape. Beavers tend to be bulky and roundish when seen out of the water. They appear large even when seen in the water.

Beavers have a stocky build with a coat that can vary from very dark brown to almost yellow-brown. These mammals are large and can weigh over 50 pounds (22.5 kg)! Their rear feet are webbed and their tails are wide and flattened (paddle-shaped) with a scaly texture. Sometimes, when alarmed, they slap the tail on the surface of the water to create a loud sound and scare of potential predators.

They spend most of their time in the water and it is more unusual to see one out on land. Beavers are strict herbivores, eating bark, leaves, buds and fruits. They cut trees down, gnaw branches off and carve the bark away using their large, strong, ever-growing front teeth.

There are actually 2 species of beaver in the world:

One identification tip that may help you decide whether the animal you saw was a beaver or not is the presence of felled trees. If these trees have the iconic scrape marks of busy beaver teeth and an accumulation of woodchips below, beavers are in the area.

These industrious animals build dams and lodges from branches, engineering the environments around them. They are often regarded as a keystone species, changing the ecosystem around them and becoming a critical component upon which the whole ecosystem depends.

All of the animals on our list today share similar characteristics including brown fur and semi-aquatic habits. Their habitats and ranges can overlap – you may find them in the same places meaning clues like dams are not necessarily a beaver give-away. 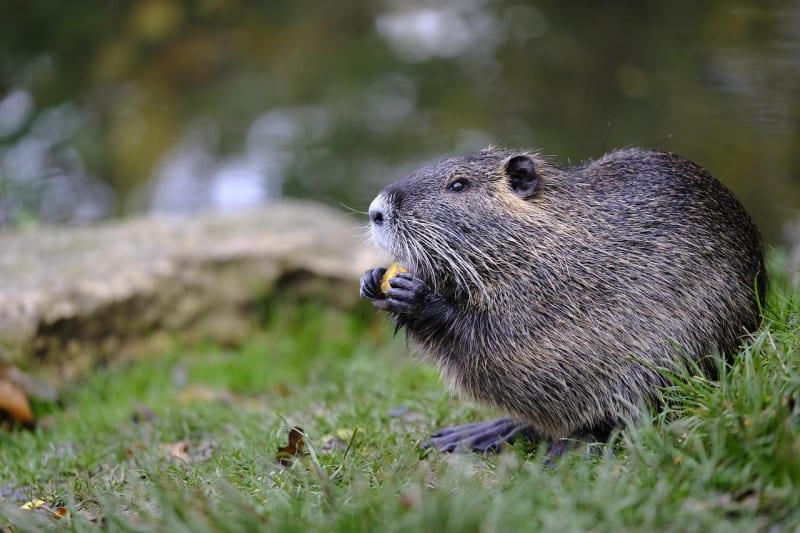 These beaver-like animals are one of the top suspects when it comes to misidentifying a beaver. With their thick, brown fur and semi-aquatic habits, they are well set to pose as a beaver lookalike. This is the most likely species to fit the description “small beaver like animal”.

Muskrats are also smaller than beavers, weighing roughly 3 to 4 pounds (1.3-1.8 kg) and reaching around 20 inches (50 cm) at maturity. They have thin, rat- or mouse-like tails which are completely hairless and much smaller than beavers’ tails. When on land, these “small beavers” look like round furballs.

They will build dens but made out of reeds, cattails and other vegetation mounded into a pile rather than branches.

There is a kind of rare muskrat species called the round-tailed muskrat which, as the name suggests, has a more rounded tail compared to a common muskrat. But this species is difficult to see and restricted to southern Georgia and Florida.

Do beavers and muskrats live together? 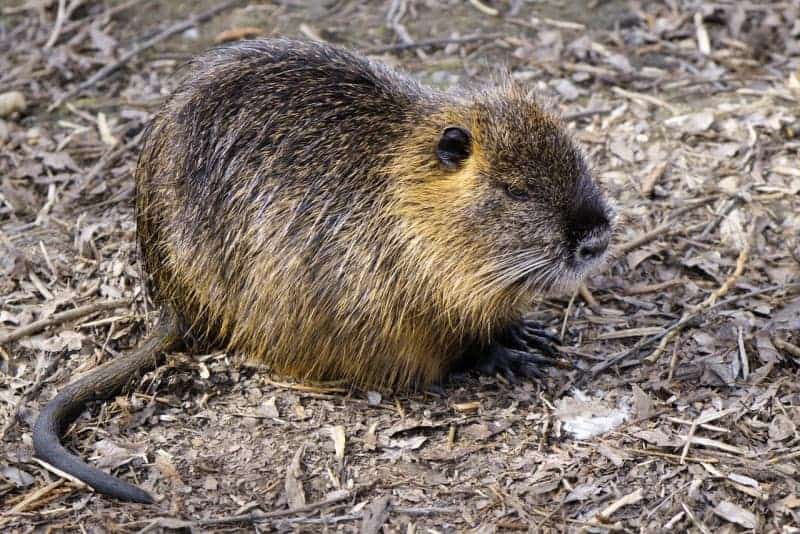 Another common species which is mistaken for a beaver is the nutria, also known as a coypu. While they also have thick brown fur and a semi-aquatic nature, they are around half the size of an adult beaver. Like muskrats, nutria have a long, thin, hairless tail.

Nutria are most common in South America but some colonies have developed along coastal areas of the Gulf Coast (USA) – escapees from the fur trade.

You are unlikely to find nutria carrying vegetation in their mouths – they prefer to dig around for tubers and roots, and chew on aquatic grasses. They will also tunnel underground rather than build mounds or dens. The incisors of a nutria are distinctively orange. 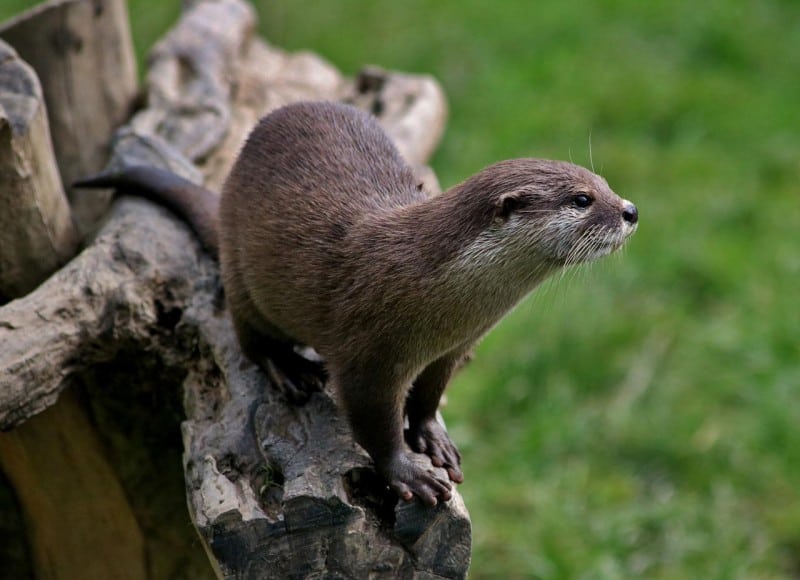 The tail of a North American river otter is furry – it is one of the most common species that people think looks like a beaver but with a fluffy tail. Their faces are more rounded compared to a beaver, and they will characteristically stick their heads out of the water to look around, the rest of their body hidden beneath the surface.

Unlike beavers, otters are carnivores, hunting swiftly for fish in the water. They often benefit from the pools and slow-flowing areas beavers create along a watercourse. Their feet are webbed like the rear feet of a beaver.

River otters are graceful, slender animals with very smooth fur which can almost appear silvery when wet. Adults can grow to 34-50 inches long (0.86-1.27 m) and can reach around 25 pounds in weight (11.3 kg).

This species is social and playful, and can be very curious towards people. This is one thing that marks them apart from beavers which tend to be seen alone and will avoid humans. 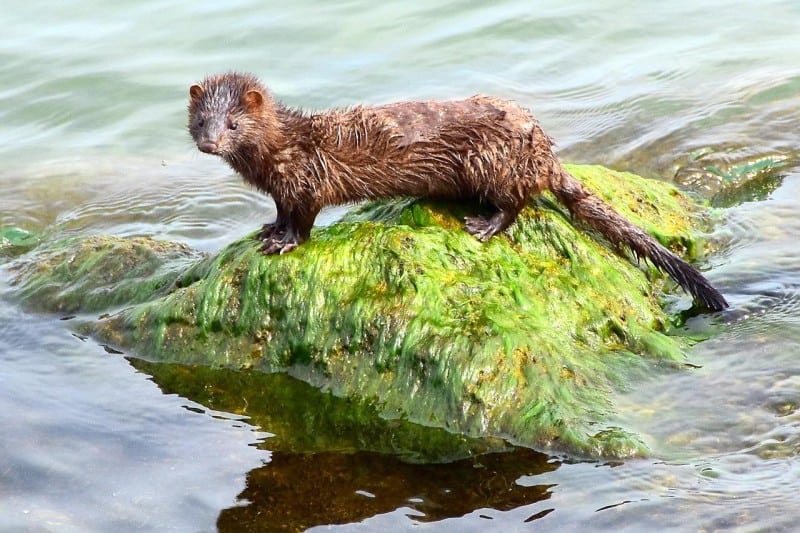 While most other mammals on our list are herbivorous or omnivorous, mink are strict carnivores. They are cunning and voracious predators, often seen hunting for fish and birds (including bird nests where they feed on eggs and chicks) along riverbanks or the edge of waterbodies.

This mammal has a long, slender, weasel-like body shape. Sometimes it will characteristically hunch its back when static. Minks tend to have dark brown, sometimes orange-brown fur, and have furry tails.

Mink can be seen swimming in the water but usually will not swim for extended periods of time – they are happier on land. Sometimes mink are mistaken for otters, but they are much smaller. Adults can be between 12-18 inches long (31-45 cm) and weigh between 0.8- 3.5 pounds (0.4-1.6 kg). 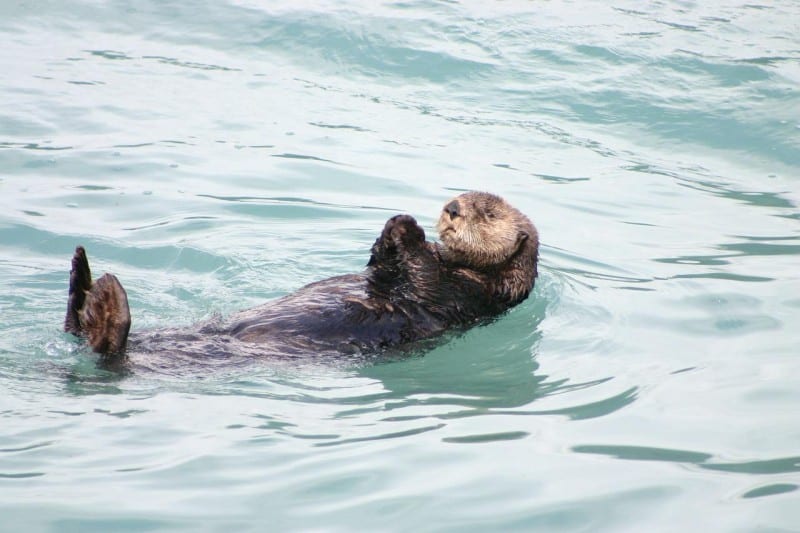 If you have seen a beaver-like creature in coastal areas between southern California and Alaska you may have seen a sea otter. This species has incredibly dense fur – 1 million hairs per square inch, the densest fur of all mammals! It requires this thick insulation in the cold waters it inhabits.

Sea otters also have webbed feet and a long, furry tail like their cousins the river otters. Their heads are colored light brown to cream which marks them out from all the other species on our list today.

They float characteristically on their backs, often snacking on shellfish or crabs which they balance cleverly on their stomachs as they bob along. 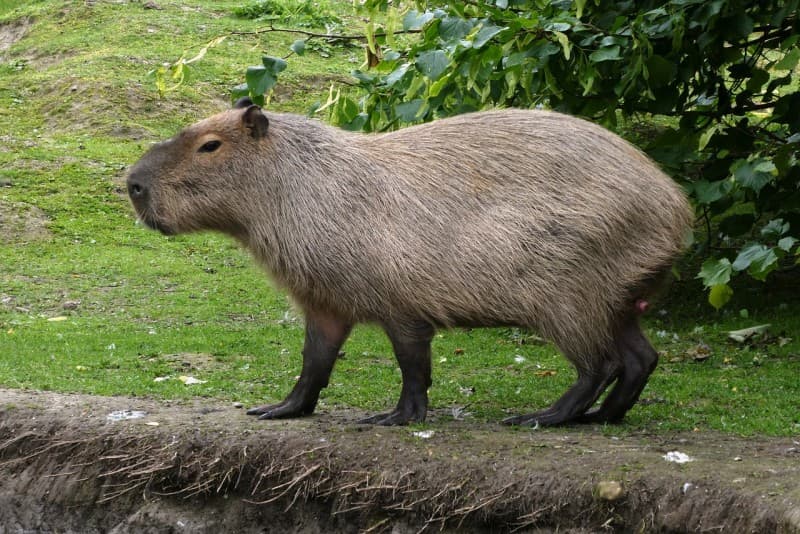 If you are asking “what animal looks like a beaver but without a tail”, you may be thinking if the capybara. This impressive species is the largest of all rodents, standing at around 2 feet (60 cm) tall.

Capybaras have the stocky, rounded look of a beaver, and also sports slightly webbed feet (like the rear feet of beavers). Their fur is also brown but tends to be lighter brown with a shaggy rather than smooth look.

They are talented swimmers and inhabit freshwater areas through Central and South America. Capybaras are also herbivores, with a similar diet to beavers.

They have much longer legs and more of a land animal look compared to a beaver, and the key difference is the lack of a tail.

What animals look like beavers but without the tail?

The most common culprit is the capybara which is like a large, long-legged beaver but which lacks a tail. It is also possible that you are looking at an individual which has lost its tail in an accident or a fight, or that you have not been able to spot the tail because it was hidden beneath the water.

Some of the most common beaver-like animals which are larger than the beaver are the sea otter and capybara. Other, similar animals will not be found in freshwater environments.

What are some examples of small beaver-like animals?

Nutria, American mink and muskrats are all examples of smaller, beaver-like animals. Each of these species are semi-aquatic and will share the same kind of environments as beavers. Water shrews and water voles can also been seen in the same freshwater environments but are much harder to spot because of their tiny size and illusive nature. While they also have brown fur and long tails, their tails are thinner and hairless much like a nutria or muskrat, rather than flattened and broad like a beaver.

What animal looks like a beaver and a duck?

You’re probably thinking of the platypus, also known as the duck-billed platypus. Another brown-furred, semi-aquatic mammal found in freshwater environments. However, this animal is found in Australia, far away from beavers. It also has webbed feet and a very beaver-like tail though.