The heart is a blood-pumping muscular organ, pushing the blood through blood vessels, carrying oxygen and nutrients into the body and metabolic waste (CO2) into the lungs for elimination.

Most animals (humans included) have one heart, split into four or three chambers (atriums and ventricles).

However, there are animals with no hearts at all (like jellyfish, sea cucumbers, starfish, and coral), but also animals with more than one heart or circulatory system so complex that they have auxiliary pumps.

And it is not just one tiny, extra heart, but some of them have three, four, or even thirteen hearts. Intriguing, isn’t it?

Well, get comfortable because, in this article, I invite you to discover the secrets of the animals with multiple hearts. 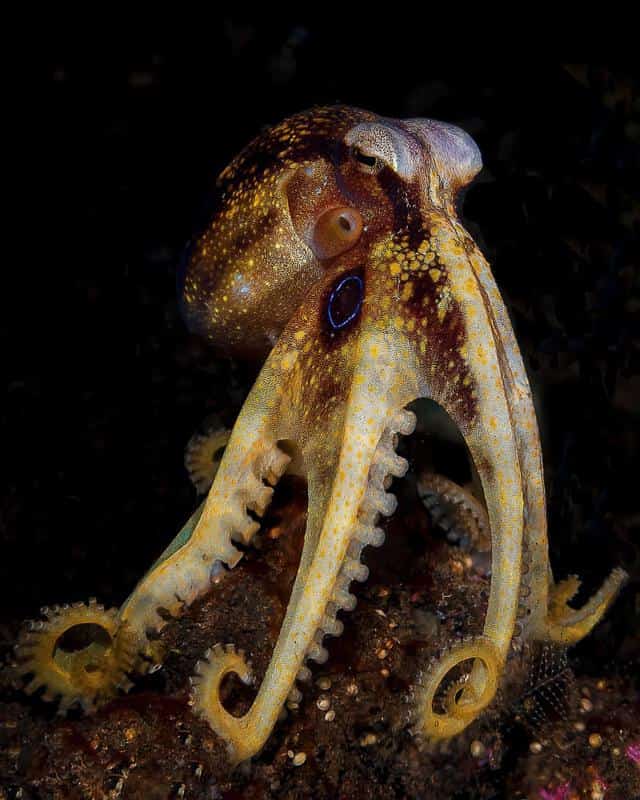 Among invertebrates, the octopus is one of the most intelligent, with the most complex behaviors: expulsates ink, jets fast through the water and hides, displays threats, camouflages itself, and even deceives; and all these only to defend itself from the predators.

These aquatic wonders are even more impressive because they have nine brains (maybe we’ll be talking about it in another article) and three hearts, which made this “little” fellow win a place in our list today.

Two of the octopus’ hearts have the role of circulating the blood through each of the two gills, transporting oxygen and metabolic waste, and are called “branchial hearts”.

The third heart is a systemic heart, with muscular astringent walls, split in one ventricle and two atria, which spreads the oxygen-rich blood towards the rest of the body.

Considering it has nine brains (one primary, in the head, and one in each of the eight arms), no wonder the octopus needs massive flows of blood to oxygenate them all.

The systemic heart becomes inactive while swimming, so the octopus gets tired fast, which is why the animal prefers to crawl.

The octopus blood has a high viscosity level, and it’s blue due to a rich-copper protein that serves oxygen transportation.

This protein, called hemocyanin, circulates through the blood plasma, it has a bigger size compared to hemoglobin so, it moves slower.

The three hearts of the octopus are meant to compensate for the less efficient oxygen transportation of the hemocyanin.[1] 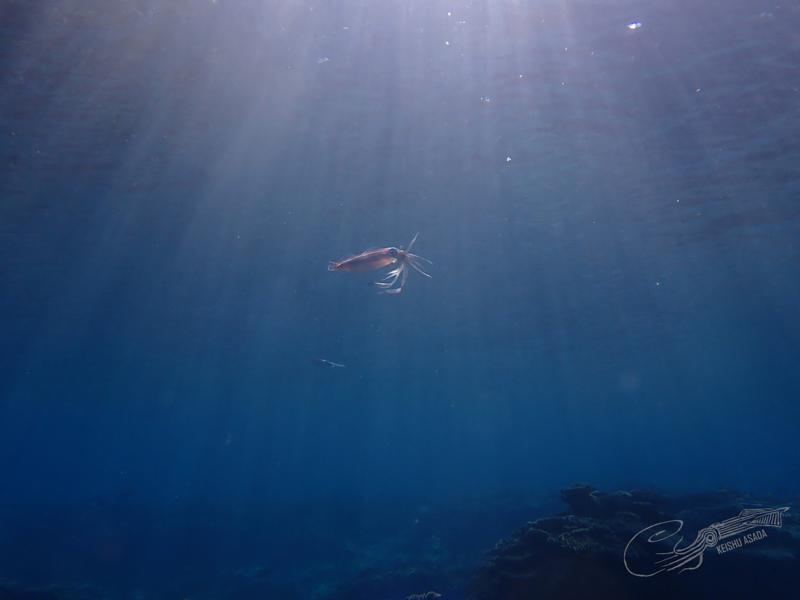 The squid is a relative of octopus from the Cephalopods family, but, compared to the octopus, the squid has a tiny skeleton made of chitin in the form of a pen.

Like its “cousin”, the squid is intelligent, changing its color for signaling or camouflage and using jet propulsion for swimming fast.

Unlike the octopus (a solitary animal), the squid is hunting collectively, and some species glow in the dark.

Like the other cephalopods, the squid has blue blood due to the presence of hemocyanin and three hearts – two branchial ones and a systemic one.

The branchial hearts push to the gills the blood filled with metabolic waste for elimination.

The blood that returns from the gills is filled with oxygen and is pushed forward into the body by the systemic heart (split into three chambers – two upper atria and a lower ventricle).

The heart rate, the cardiac output, and the blood pressure of the squid are superior to any other cephalopods, making the squid a fast swimmer.[2] 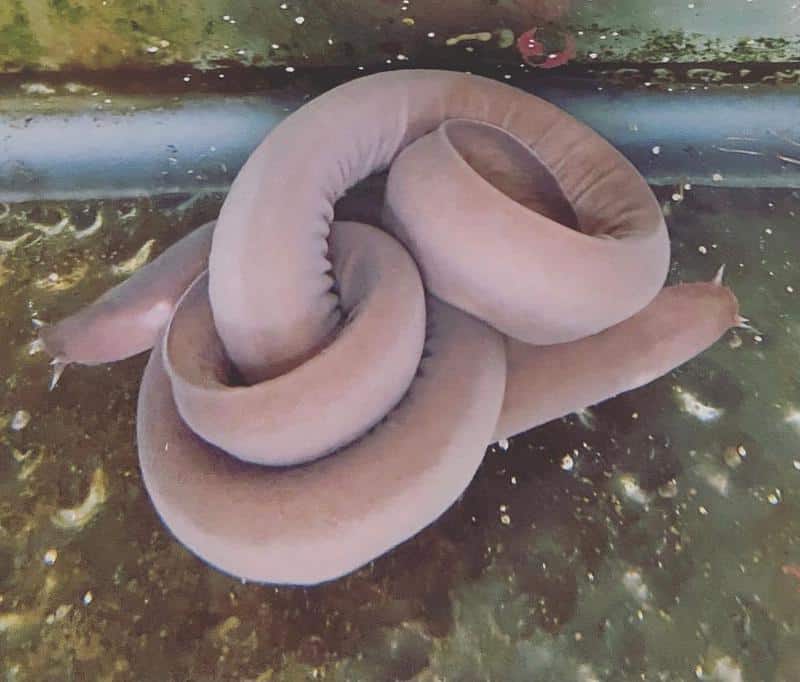 It is almost impossible for an animal with multiple hearts to have that as the only extraordinary feature.

One of the remarkable things about the hagfish is that it is the only animal with a skull but an entirely missing spine and only some rudimentary vertebrae.

The hagfish is a tortuous tubular animal with a paddled tail and grey-pink skin, often confused with the eel, but different than this one by the lack of bones and jaws and by the excessive amount of slime.

This slime is helpful to the animal to protect itself from predators, sliding its way out of the attack.

The hagfish can “sneeze” the slime out of its nostril to avoid choking itself with it, and it knots its body to clean the slime off.

Going back to our multiple hearts, the hagfish has a very primitive circulatory system, made of four hearts:

Close to the liver, one brachial heart functions as the main pump, and three accessory hearts (cauda, portal, and cardinal) function as auxiliary pumps.

The portal heart is tubular, T-like shaped, and can be found on the lower right side of the animal; it is small, with a simple structure, and beats at a faster rate.

The caudal heart is formed of paired sacs, surrounded by valves located on each side of the median cartilage plate.

The caudal heart has a reflex center in the spinal cord, and nerves activate it: stimulating the hagfish’s skin will stop the caudal heart completely.

The hagfish has a pair of sacks in the head area, without any muscles or machinery, producing rhythmic impulses: the cardinal heart.[3] 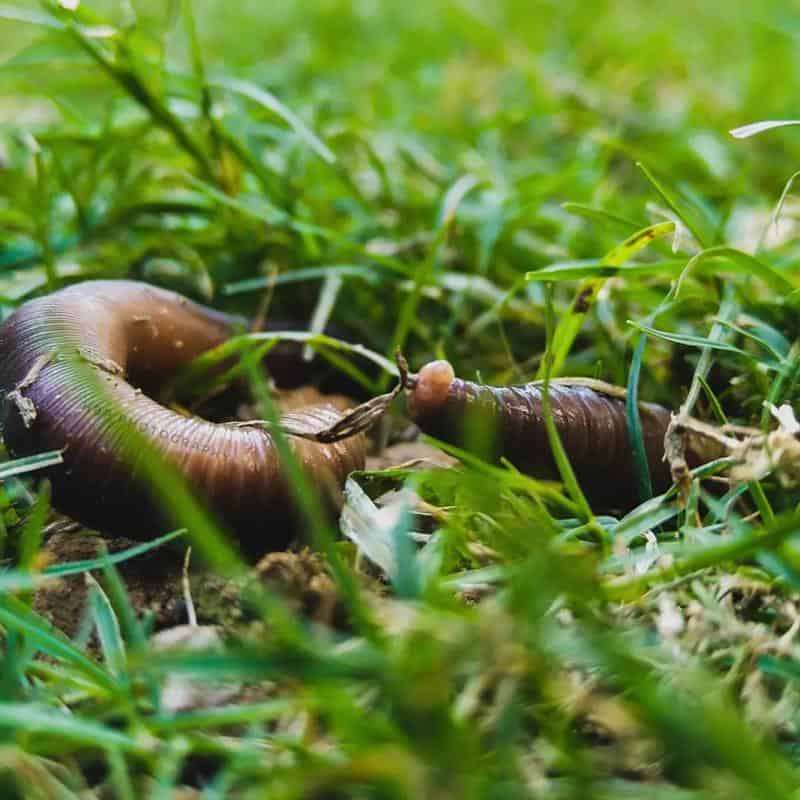 Who would have thought that these tiny creatures have so many hearts? Well, technically, they don’t.

The earthworms have five pairs of aortic arches, which all together function pretty much like a human heart:

The aortic arches pump the blood into the ventral vessels (that act as the aorta) and from the dorsal blood vessels (a collecting structure located in the intestines area, towards the animal’s tail).

Besides the aortic arches, ventral vessels, and dorsal vessels, the circulatory system of the earthworm has a sub-neural vessel (under the ventral nerve cord) and two lateral neural vessels on each side of the nerve cord.

Despite its five aortic arches functioning like a human heart, the earthworm takes oxygen through its skin and requires moisture to breathe.

The five-arches heart of the earthworm is located close to the animal’s mouth, and the name comes from its arches-like shape.[4]

Also Read:   What Do Earthworms Eat? What Gives Them Their Nutrients? 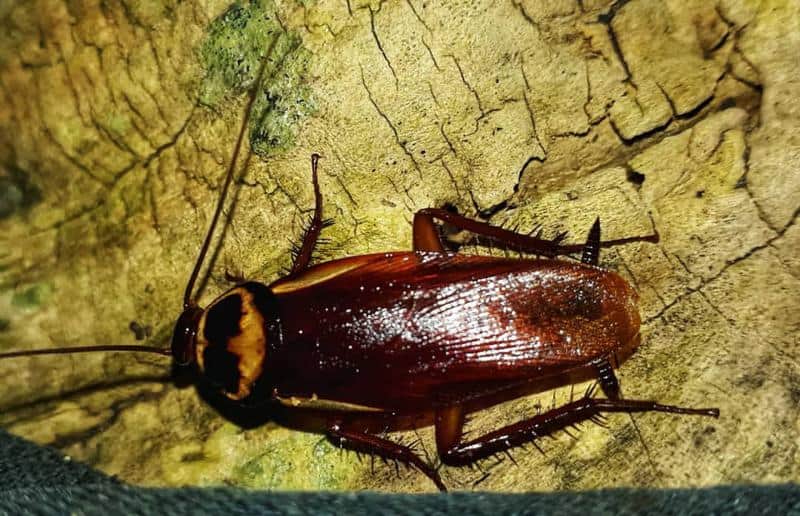 I know the last thing you want to hear about these disgusting little fellows is that they have some super multiple hearts, but they do.

Actually, cockroaches have one heart, an elongated tube of thirteen cone-shaped chambers arranged in segments.

On the lateral of each heart’s chambers is an opening (called ostia) with two valves attached, allowing the blood to go one way only: inside the heart.

The heart is formed of a thin membrane on which is lined a single layer of cells with striated muscles.

The first chamber of the heart ends in an anterior aorta which, further, opens into a primary body cavity filled with circulatory fluid located next to the head (hemocoel).

The dorsal diaphragm ventricular moves due to the relaxation and contraction of the twelve pairs of muscles called alary muscles; the rising and falling of the diaphragm push the blood to flow into the beating heart.

To send the blood in the anterior aorta from where it goes to the organs and auxiliaries (wings included), the heart contracts in a wave from behind to front, forcing the blood flow.

The cockroach has a pulsating blister at each antenna’s base that also pumps blood. 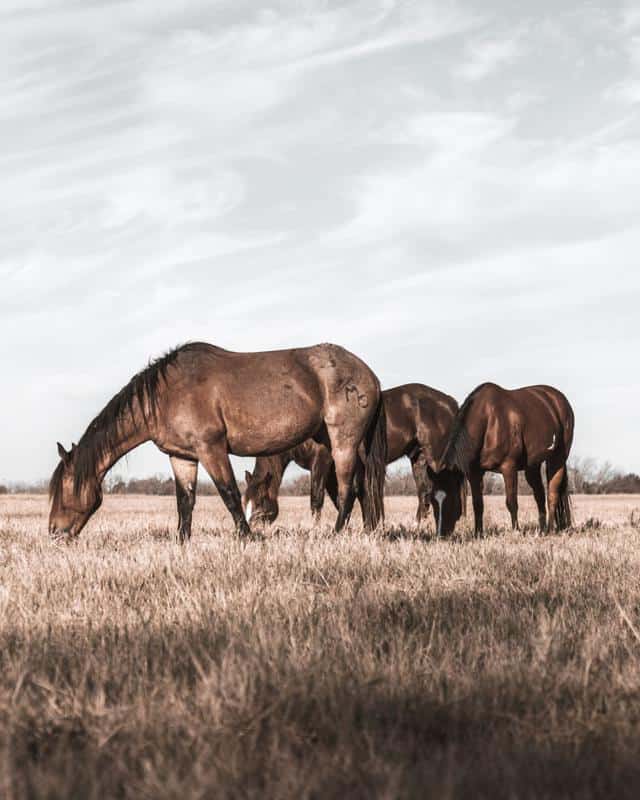 Besides the classic heart typical to mammals, these majestic, beautiful creatures have a blood pump at the bottom of each foot.

These blood pumps, also known as “frogs”, fulfill more the role of blood reservoir rather than pumps, although, each time the animal puts its foot on the ground, the blood pumps from the frog into the horse’s arteries.

So, we could say the frogs act like mini-hearts or, at least, as auxiliaries to the main one, even though they do not pump by themselves but act under the foot’s pressure.

Considering all these, do you think the horse should be on the list of the animals with multiple hearts?

Also Read:  Animals With Multiple Stomachs: How Does That Even Work?