There is an urban legend claiming snakes are blind, but it is a myth. While blind snakes exist (the Indotyphlops braminus, whose common name is, appropriately, blind snake), most of them aren’t blind and can see things with their eyes.

The truth about snakes’ vision is that their eyesight is very poor, especially compared to humans’. We humans see the world in high definition, full of colors and with binocular vision. Snakes see the world in black and white and can only see the shape of the objects around them. If you place them in front of a Picasso painting, they’ll only see a bunch of blobs.

But while poor eyesight is difficult for us to deal with (that’s why we invented glasses, contact lenses, and laser eye surgeries), it’s barely an issue for snakes. They evolved to rely on other senses to survive.

In this article, we are going to learn what snakes actually see, how their vision works, and how they evolved to survive despite their lack of vision.

Why Do Snakes Have Poor Eyesight?

It is believed that snakes’ poor eyesight is the result of the evolutionary process. Some scientists believe this is due to their diet which mostly consists of small animals which they follow by smell or heat.

Other scientists believe it is because snakes spend most of their time underground where there is not much light. This would explain why some species of snakes have heat-sensitive pits on their faces that help them see better in the dark.

Snakes evolved from lizards and, during this process, they lost their eyelids and external ears. They developed a sense of smell that was a more important ability for them in terms of finding prey and avoiding predators.

To compare them with us, we evolved to have good eyesight because we are predators that needed to see our prey from a distance, and we also needed to be able to communicate with others of our species.

Snakes, being lonely creatures, don’t need to communicate with others and can get by just fine without seeing their prey as long as they can smell it.

How Does Snake Vision Work? 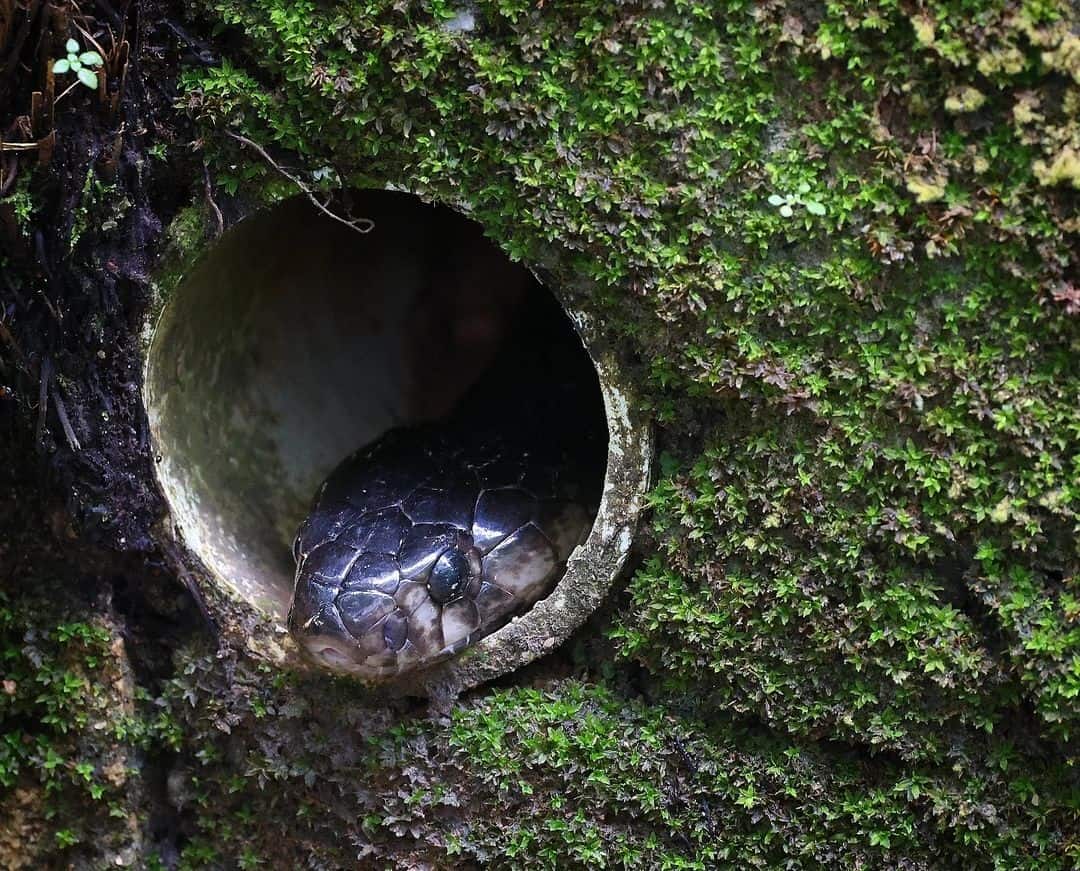 Even though they can’t see colors or far away objects, snakes have very good close-up vision. This means they can see things that are right in front of them very clearly. Their eyes are also very sensitive to movement, so they can easily spot their prey (or predators) from a distance.

To see better in the dark, some snakes (pythons, vipers, and boas) have heat-sensitive pits on their faces that help them detect warm-blooded animals. These pits are basically tiny holes that open into a large cavity lined with heat receptors.

It is also worth noting that snakes can see in the ultraviolet range, which means they can see things we can’t. This is helpful for them to find prey that might be hiding in the shadows.

Editor’s note: An example of a snake species that can see in the dark is the pit vipers. This is thanks to their heat-sensitive pits on their faces that help them detect warm-blooded animals.

Can Snakes See in Color?

No, snakes do not see in color. They can only see in black and white. This is because they have only one type of cone cell in their retina (the part of the eye that detects light).

Cone cells are responsible for color vision, and humans have three types of cone cells that allow us to see a wide range of colors.

Some animals, like bees and certain lizards, have two types of cone cells and can see a limited number of colors.

Do All Snakes Have Poor Eyesight?

Now that we know how snake vision works, you might be wondering if all snakes have poor eyesight. The answer is no. There are some snakes that have very good vision, such as the boa constrictor.

Boa constrictors need to be able to see their prey clearly so they can strike with precision. If they couldn’t see their prey, they would miss and starve to death.

Other snakes that have good vision include the king cobra, the night snake, and the green tree python. These snakes are all active during the day and need to be able to see to hunt their prey.

So, while most snakes have poor eyesight, there are some that have very good vision. It all depends on the type of snake and its lifestyle.

How Can Snakes Survive with Poor Eyesight?

Snakes have evolved through millennia to increase their survival chances. In their case, not seeing is hardly an issue since they have access to other, more sophisticated methods of hunting their prey.

These methods are fascinating, because they are so different from our own way of perceiving the world. We are used to thinking that snakes are somehow handicapped because they can’t see like we do.

But in reality, they have simply adapted to their environment in a way that is much more efficient for them.

Here’s how they find their food sources.

Snakes have nostrils through which they can smell, but they rarely use them to hunt for prey. Snake nostrils are pretty much exclusively used to breathe. Instead, to smell their prey, they use their tongues.

When snakes continuously move their tongue around, they’re tasting the air. They’re smelling for prey, but what’s fascinating is that they don’t smell through their noses like most other animals. Instead, they rely on 2 glands on top of their mouth, called the Jacobson’s organ to help them smell.

The tongue collects particles in the air and brings them back to the Jacobson’s organ. This organ then analyzes the particles and tells the snake whether there is food nearby or not.

Editor’s note: This method is so effective that some snakes don’t bother with eyesight at all. The Blindsnake, for instance, is a small snake that spends its entire life underground. It has very small eyes that are completely useless, since it’s always in the dark. Instead of relying on eyesight, it uses its sense of smell to find food and avoid predators.

Another way snakes can find their prey is by feeling the vibrations in the ground. This is why you often see snakes with their head raised up in the air – they’re trying to feel any vibrations that might be coming from an animal walking nearby.

They can also sense these vibrations through their skin, which is why you should never try to pick up a snake by its tail. The snake will feel the vibrations of your movement and might think you’re prey.

We already mentioned snakes that have heat-sensitive pits on their faces. These pits are basically tiny holes that open into a large cavity lined with heat receptors.

When an animal comes close to the snake, the pit detects the difference in temperature and sends a message to the brain telling it there is something nearby.

How Do Snakes Avoid Predators?

As you can imagine, since most snakes can’t see very well, they seem to be easy prey for predators. But in the same way they have adapted to finding food, they have also adapted to avoiding predators.

One way they do this is by camouflaging themselves.

Most snakes are very good at blending in with their surroundings, making it difficult for predators to spot them. This is especially true for snakes that live in the desert, where there is a lot of sand mostly in one shade.

Another way snakes avoid being eaten is by being venomous.

As you probably know, some snakes are venomous and can kill their predators with a single bite. This is an effective way of deterring predators, but it’s also a risky strategy.

If the snake bites a predator that is too large for it to kill, the snake might end up being eaten anyway.

If things are going badly, the snake can always flee. Many snakes can slither away very quickly, making it difficult for predators to catch them.

So, even though they might not have great eyesight, snakes have adapted in other ways that help them survive in the wild.

Snakes might not be able to see very well, but they have developed other ways of finding food and avoiding predators. Their unique adaptations make them some of the most fascinating creatures on Earth.

Although most people find snakes repulsive, or at the very least scary, it is important to remember that they are an integral part of the ecosystem. Without them, many animals would not survive.

And their characteristics are extremely fascinating. So the next time you see a snake, don’t be scared – be amazed.