Pogona vitticeps or the bearded dragon is well-known for its broad, triangular head, flattened body, and clusters of spiny scales covering its body. “Beardies” are native to the deserts of Australia. The name bearded dragon refers to the underside of this reptile’s throat that can turn black and puff out for various different reasons. This usually happens when these lizards feel threatened or face any kind of stress.

Bearded dragons are among the most popular reptiles in the world and prove to be good pets because they are, generally, nice and peaceful. What makes them so amazing is that these dragon-like animals come in different eye-catching colors. In this post, you’re going to learn more about the colors of bearded dragons and other useful facts about them.

Several factors influence the colors of bearded dragons, including genetics and environment. This is particularly the case with black morphs.

Bearded dragons change their color to thermoregulate, but also blend into the environment more effectively. Below, we’re going to focus on different colors of popular beardies. 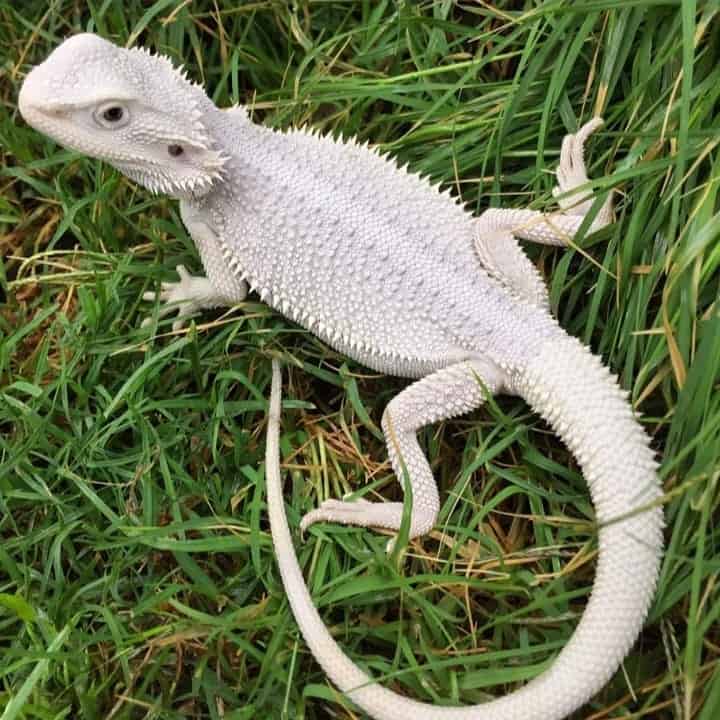 These bearded dragons are extremely rare. Some of the most experienced collectors or breeders have never seen an albino beardie in person. Although albino bearded dragons can be born naturally, they don’t live past a few weeks old. That happens because they can’t absorb UVB rays properly. They’re also unable to efficiently process calcium.

White bearded dragons used to be very rare and they’re still mistaken for albinos. They’re not as common as other morphs of beardies, but many pet stores do carry the white/silver color morphs.

The actual white tone dragons varies; it can be grayish in a cooler environment and white in hotter temperatures. White beardies result from breeding a wiltblit and snow bearded dragons. While their appearance is similar to snow beardies, white beardies have smaller blotches of dark spots.

A little reminder; snow bearded dragons are completely white reptiles with no markings. 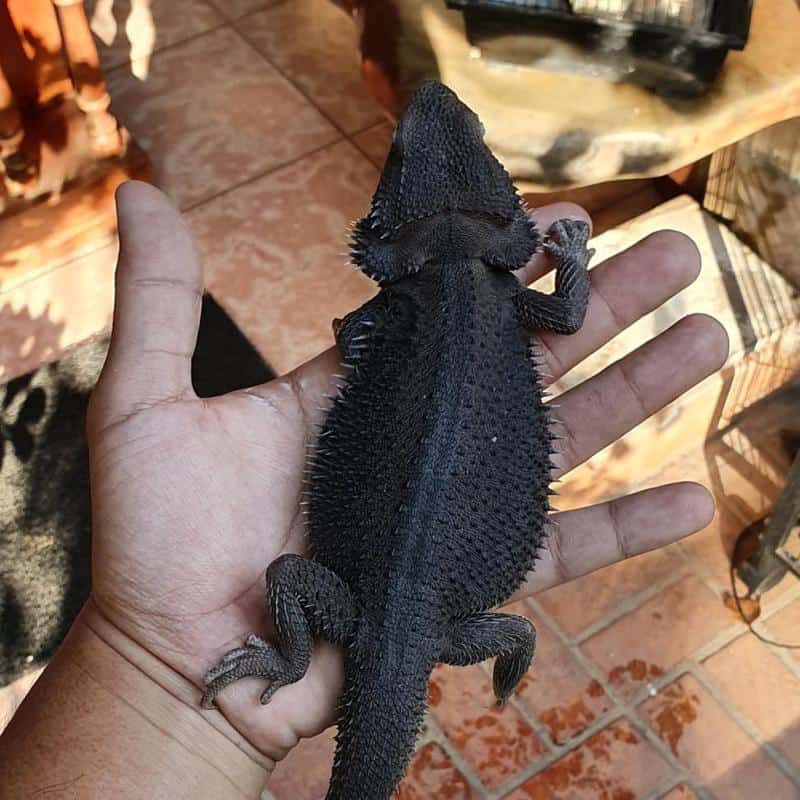 Black bearded dragons have more melanin than other morphs, which is why they are darker. Sometimes beardies of other colors can turn blackish due to the temperature change or the environment.

You see, bearded dragons are ectotherms, like other reptiles. That means they need to regulate their body temperature from the environment around them. When they are too cold, they need to absorb more heat. For that reason, they become darker in appearance.

Plus, keep in mind, bearded dragons can appear black when threatened. 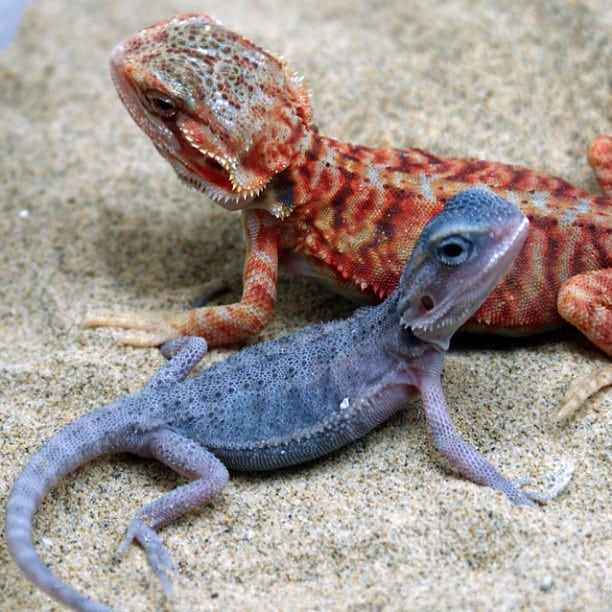 Blue bearded dragons are actually translucent. This morph is a product of breeding two translucent beardies with one another. You see, a normal translucent beardie may have a blue tint on its belly, but true blue dragons can have that shade over the entire body.

Although blue bearded dragons are highly sought after, most of them do not retain their blue color as they reach adulthood. 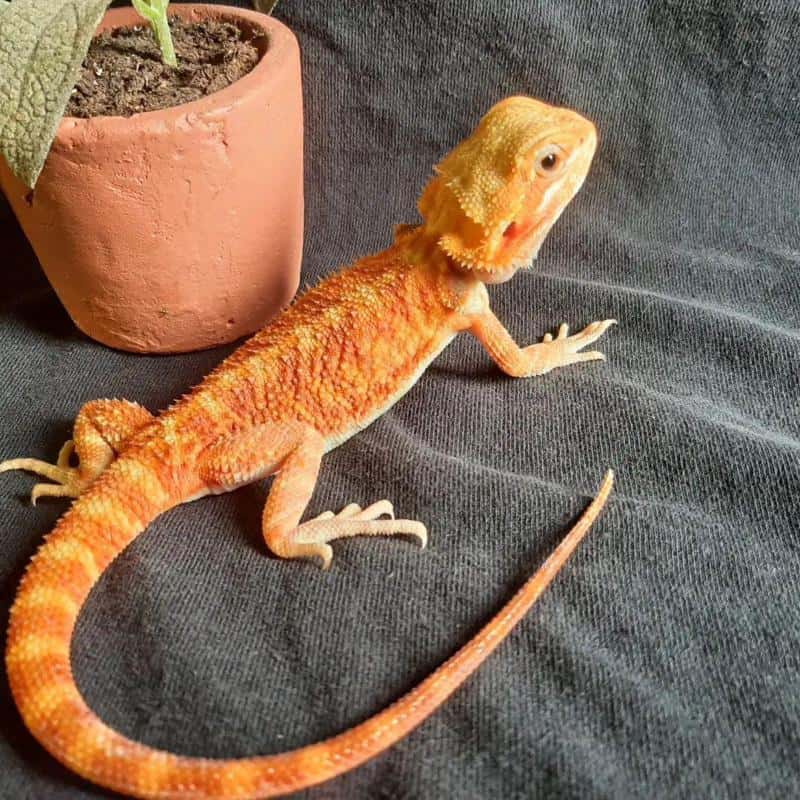 Citrus bearded dragons are usually yellow with darker orange-red stripes. Sometimes they have tangerine color and yellow stripes. Not only do citrus beardies have great colors, but they also happen to be playful.

In fact, citrus bearded dragons are a very popular choice for reptile lovers. This is especially the case for people who prefer vivid and distinctive colors rather than neutral hues.

Speaking of citrus bearded dragons, it’s also useful to mention other morphs which fall into the same category. These include citrus tiger, tangerine, and yellow beardies. A Citrus tiger is similar to citrus, but these morphs have more defined orange stripes. 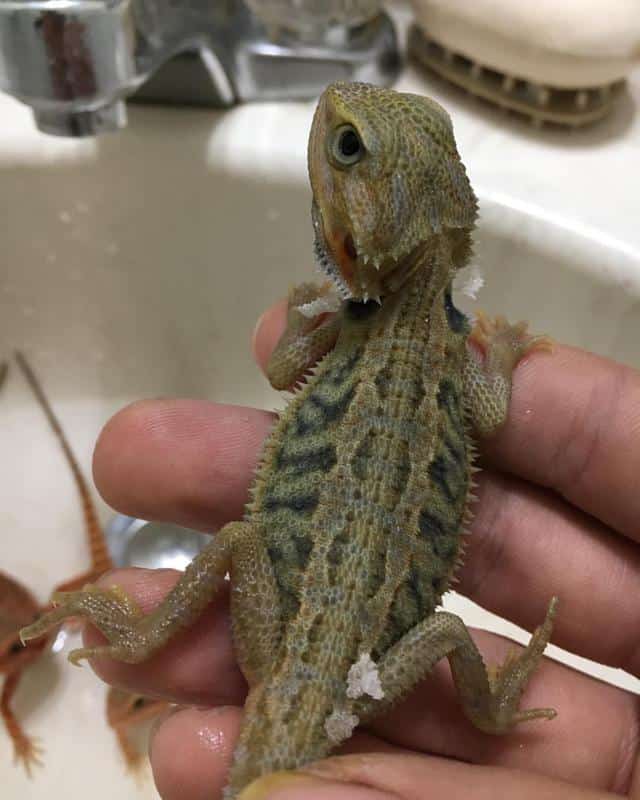 Green bearded dragons come in hues of olive green and “regular” green with standard yellows. In fact, olive green is among the most common colors of beardies.

Vivid green isn’t that prevalent, although their appearance is lovely.

Some citrus beardies can be greenish and retain that color through to adulthood.

Lemon fire bearded dragons have an unbelievably bright, vivid yellow color. Most of them have up to 90% of their  bodies covered in this amazing shade of yellow. These beardies also produce bright yellow offspring and tend to grow fast.

Probably the best thing about lemon fires is that their color is always intense. Unlike other bearded dragons, which tend to change hues as they’re growing up, lemon fires usually stay just as vivid as when they’re young. 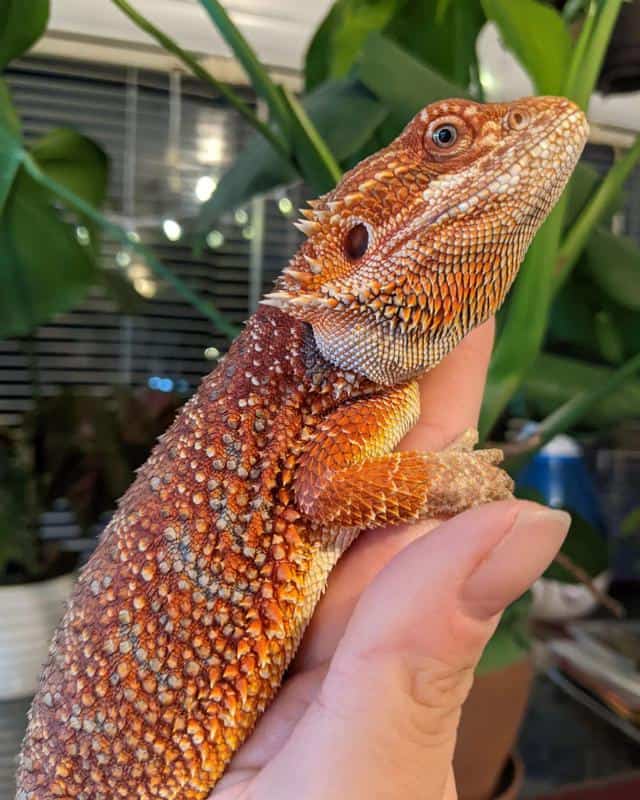 Before you say “orange is also a citrusy color”, it’s important to mention that orange bearded dragons come in a variety of shades of orange color. These include very bright orange to burnt brown shades. Tangerine beardies also fall into this category. Deep orange beardies are also known as “sunburned” bearded dragons.

Sometimes bearded dragons of other colors can become orange-ish, too. Reasons behind that change of color include a good mood or if they’re warm. In other words, it’s not a cause for concern. Not only do we love orange beardies due to their great colors and shades, but they’re also not that difficult to source. 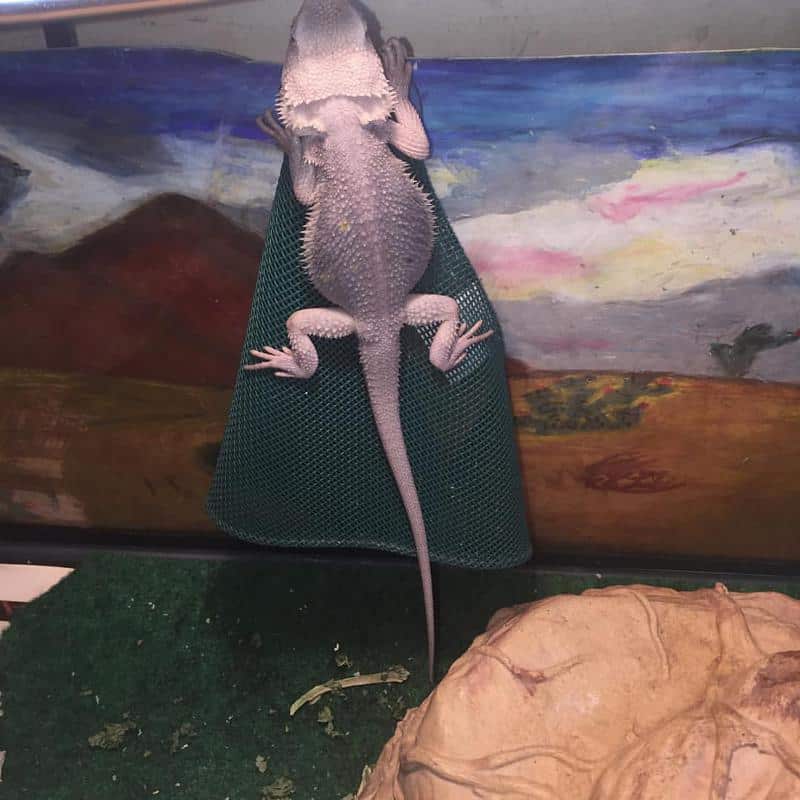 Since they’re rare, these bearded dragons are more expensive than other colors. The same applies to blue beardies, too. 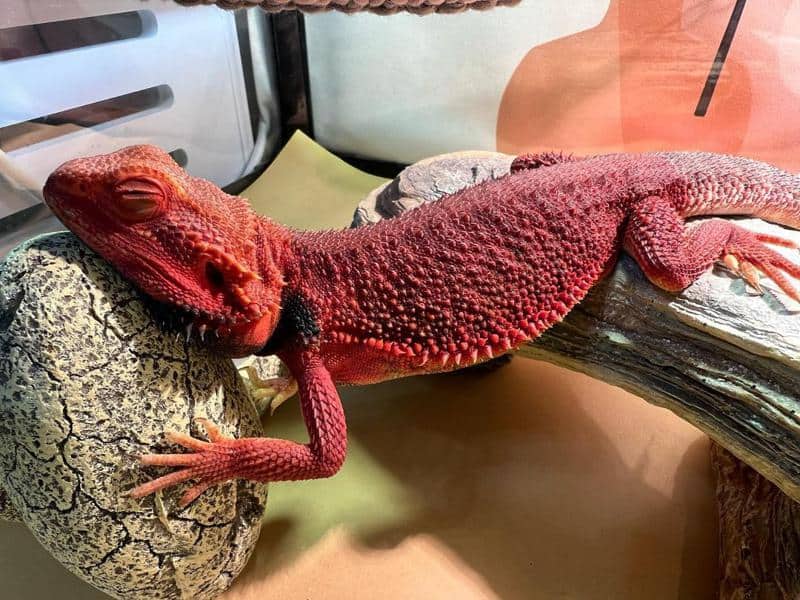 Red bearded dragons come in various shades of red. These include anywhere from brownish to brighter and more vibrant tones. Ruby red i.e. deep dark red beardies are also in this category.

Their distinctive color makes red beardies quite pricey. But they are great pets since this morph tend to be peaceful, nice, and calmer as they age. Red beardies are particularly popular among dragon collectors. And who can blame them?

Tan bearded dragon is among the most common type of beardies out there. These reptiles have sandy colors from light grey to brown. Some tan beardies also have a hint of muted yellow or orange. Since you can find these beardies in almost any pet store that offers reptiles, they’re not as pricey as others.

As you can conclude based on its name, the translucent bearded dragon has almost see-through scales and spikes. Since these beardies tend to be hypomelanistic, they’re usually lighter in color. Babies of translucent beardies generally have an almost clear or blue-ish belly.

As these beardies age, the blue color on their abdomen tends to disappear. That’s why blue and purple bearded dragons are so rare; these unique colors only happen when the reptiles retain their colors in adulthood, which isn’t always the case.

Translucent bearded dragons almost always have deep dark brown eyes that often appear as solid black. Their eyelids are sometimes blue. Interestingly, the eyes of the translucent morph typically change between solid black and yellow several times throughout their lifespan. 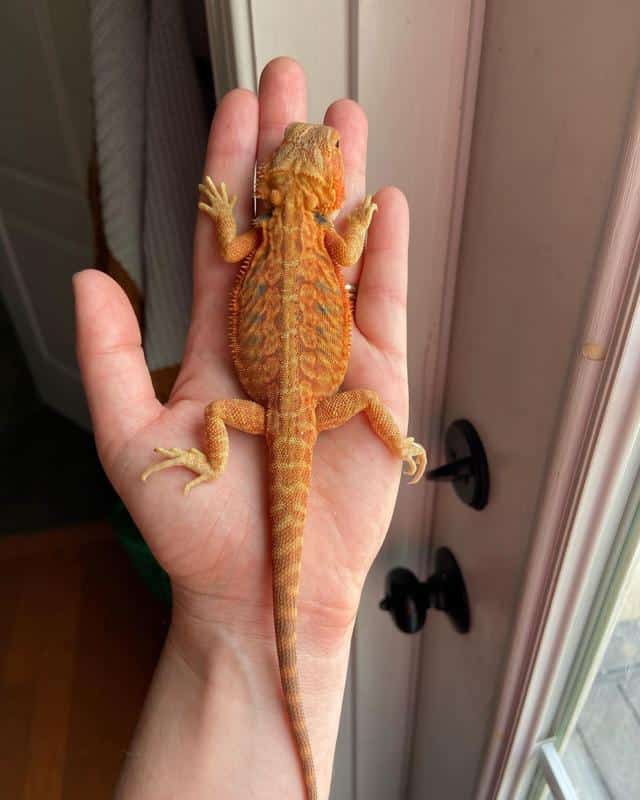 Even though the term leatherback isn’t a color per se, it’s an interesting scalation mutation that we need to address. Besides their distinctive colors, bearded dragons also have unique scalation morphs.

What we love about leatherback beardies is that they’re great pets. Not only are they low maintenance, but also aren’t aggressive toward humans.

Paradox bearded dragon is among the rarest types of these reptiles. They are bred for their distinctive pattern.

Generally speaking, bearded dragons have a pattern of banded colors on the backs and tails. What makes paradox beardies so unique is that they have a series of irregular patches of color.

They’re characterized by spots of color that appear to be out of place. Since they’re so different than other dragons, these reptiles are named paradox beardies.

Bearded dragons come in a rainbow of colors and patterns. Breeders and collectors combine different colors to get unique patterns and combinations. Some colors are more common than others. The raree the color, the more expensive the reptile is. One thing is for sure; beardies are great pets thanks to their calm character.

[…] Also Read: Everything You Need to Know about Bearded Dragon Colors […]