As one of the easiest animals to observe in the wild, birds are among our favourite animals and often hold a strong meaning for everyone from individuals to entire nations. Birdwatching is a very popular activity, partially because of how incredibly easy it is!

Today we’re going to focus on 16 feathery friends beginning with the letter A, from four major regions around the world. Grab your binoculars and a comfy seat, and get ready to swoop into the wonderful world of birds…

Birdwatching is certainly a popular pastime in North America. The US Fish & Wildlife Service reported that more than 45 million people participate in birdwatching every year – a stunning figure! This region is home to over 1000 species of bird. 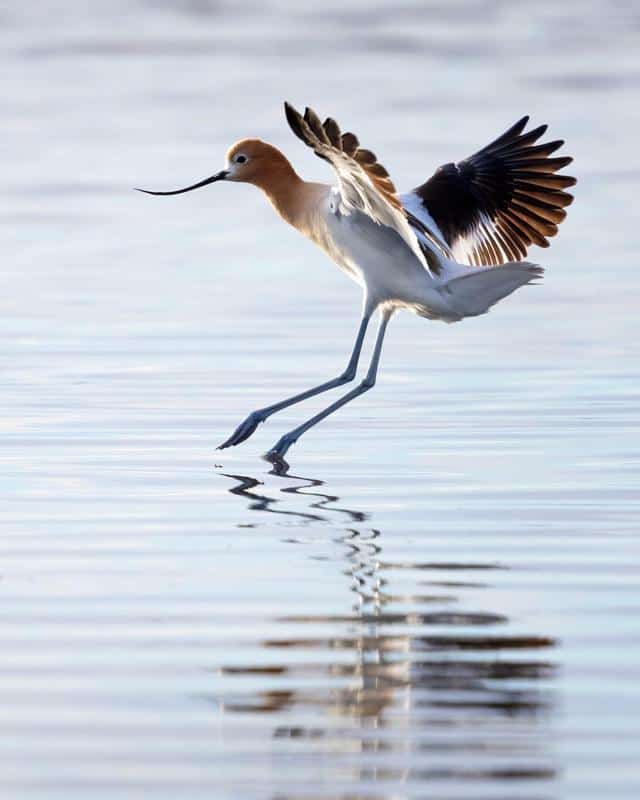 These stilt-legged birds are waders and can be found foraging in shallow water around the edge of lakes or on tidal flats. Their long, thin beaks are used to agitate the silt and mud beneath the water, filtering it for small aquatic insects and crustaceans.

American Avocets often form flocks and assemble themselves in groups to execute a distraction display when a predator is in the vicinity. This serves to distract the predator away from nesting areas which are usually constructed in open areas and comprise anything from a shallow scrape in the ground to an impressive mound of debris. 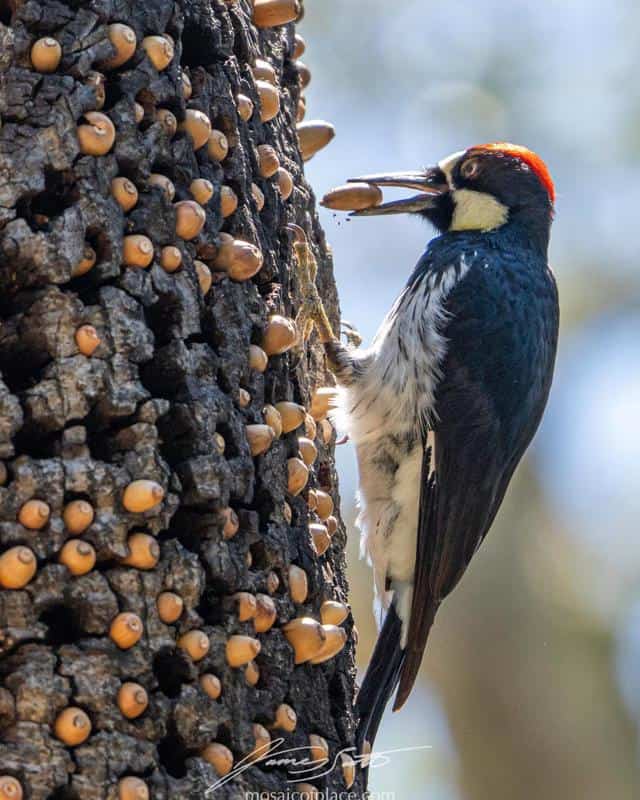 True to its name, the Acorn Woodpecker is well-known for collecting acorns in fall and stowing them in holes they create in dead wood. They feast on their stash of acorns during the winter when food sources are scarce. Unlike most woodpeckers, this species only excavates holes in trees to store food rather than search for insects. Instead, they catch insects in flight or opportunistically if they sight them crawling along on the surface of trees. 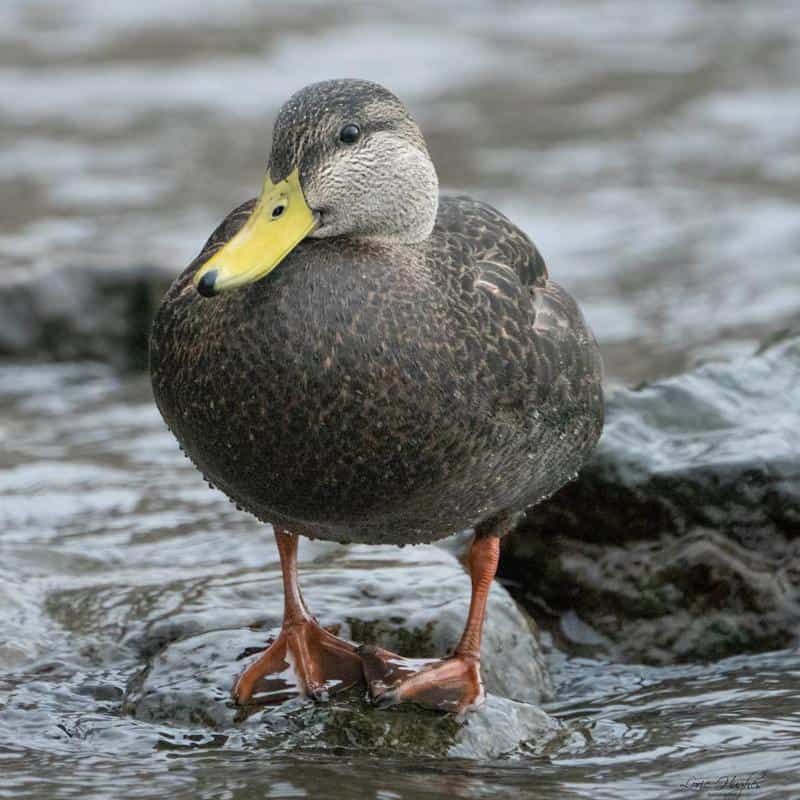 This well-camouflaged duck species can be found in eastern North America. Their plumage tends to range from dark to light brown rather than black, as the name suggests. The American Black Duck is part of a group of dabbling ducks, known for feeding in surface waters by up-ending themselves so only their rumps can be seen poking out of the water!

Often these ducks can be found in mixed flocks and confuse birdwatchers due to their close resemblance to female Mallard Ducks. Habitat loss is an ongoing problem for this species. Fortunately, restrictions on hunting have helped in slowing the decline of the American Black Duck population. 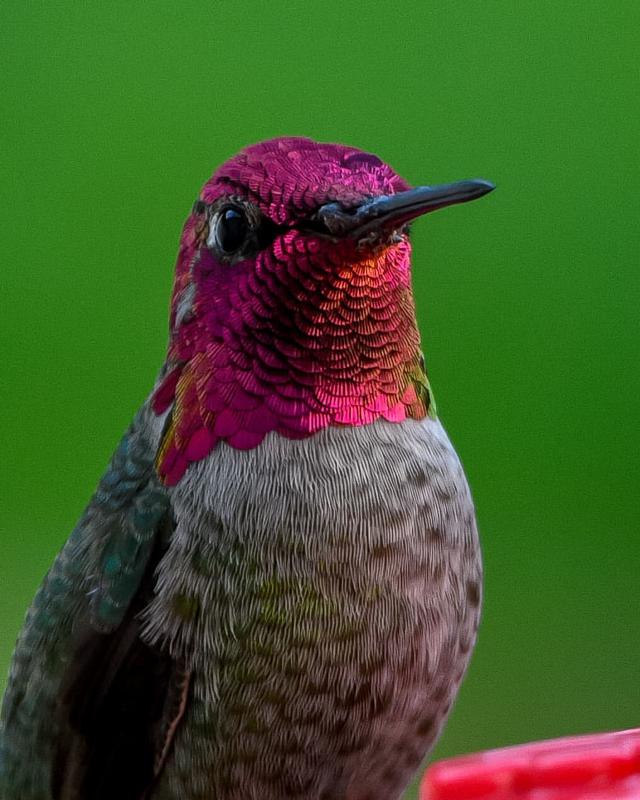 This stunning species can be found along the Pacific coast of North America. Luckily for you who live in this area, Anna’s Hummingbirds are one of the most common hummingbirds in this area, and easy to attract to your garden with sugar water feeders.

Although both males and females possess an iridescent emerald green back, only males boast an eye-catching, shimmering magenta throat (or gorget) and head. The pink patch of feathers is used by the males especially during courtship displays. Males will fly to around 130 feet (almost 40 metres!) above the ground and dart back to Earth, producing a squeaky sound with their tail feathers. 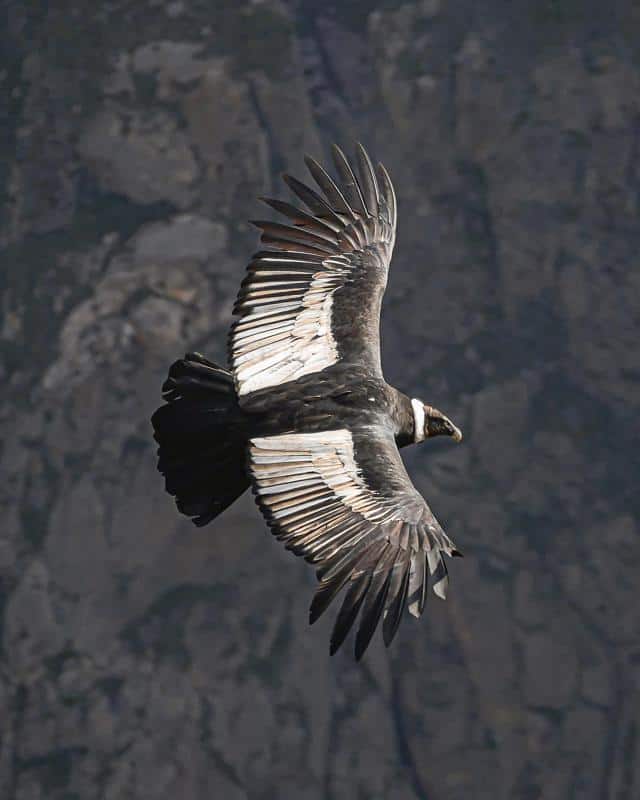 This impressively-sized bird of prey is part of the New World vulture (or condor) family, referring to their presence in the ‘New World’ – the Americas – as opposed to the ‘Old World’ – Europe, Asia, and Africa. Although this species’ plumage is mostly jet black, both genders possess a white neck ring, and males sport distinct white patches on their upper wings.

A bird of massive proportions, weighing up to 33 pounds (15 kg) with a wingspan of 10 feet (3 metres). The Andean Condor can be found throughout the Andes where it has a significant meaning in terms of mythology and symbolism in Andean countries from Columbia to Chile. It is classed as Vulnerable by the IUCN due to a combination of habitat loss and secondary poisoning. 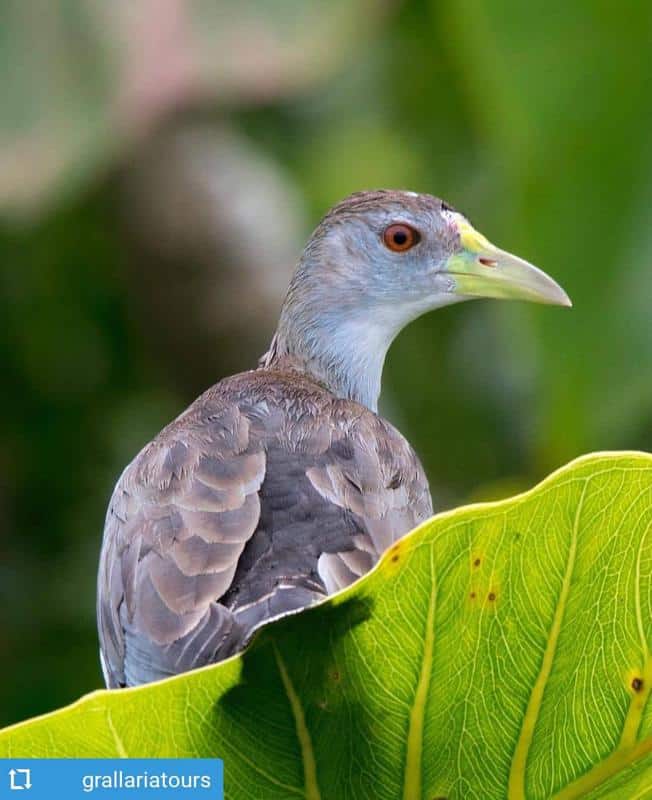 The chicken-like Azure Gallinule is a small species, with powdery blue plumage on its upper body, fading to white on the underbelly and light brown on the wings. It can be found around freshwater marshes where it uses its long, yellow legs and comically long toes to climb amongst reeds and floating rafts of vegetation to reach aquatic food sources.

Although its population status and range have not been extensively studied, it is classed as Least Concern by the IUCN, and has been spotted in many areas of central and northern South America. 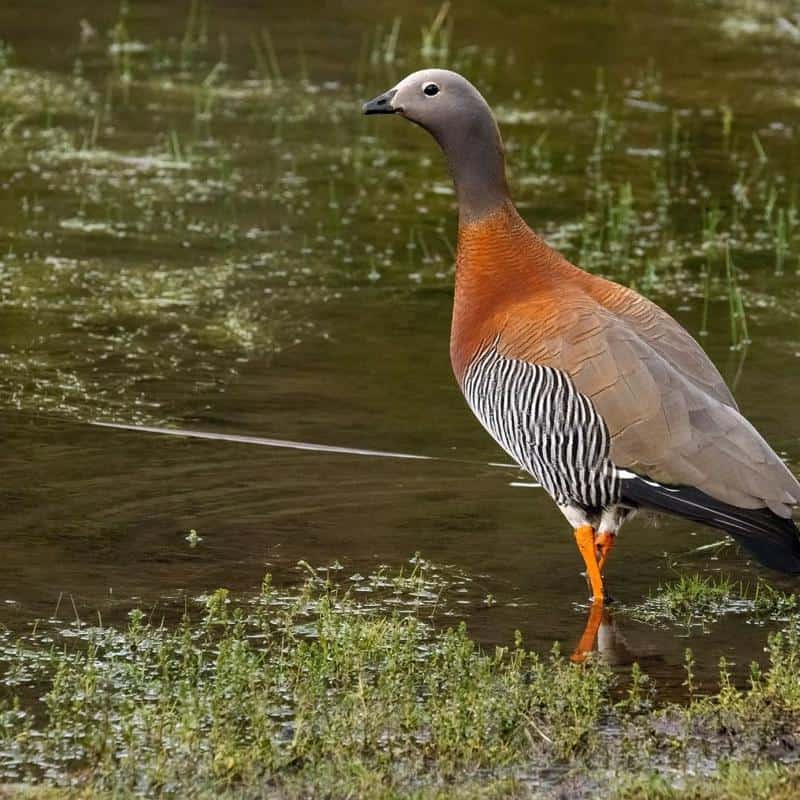 This striking goose boasts beautiful bronze plumage with black and white stripes on the wings and a sleek grey head and tail feathers. The Ashy-headed Goose can be found in southern South America, usually in swampy lowland landscapes during winter, and in mountainous areas during the breeding season.

These geese are herbivores, feeding on grasses and herbs and preferring the stubble leftover from agricultural crops such as maize and wheat during the winter. Unlike most geese, Ashy-headed Geese rarely swim, and prefer to roost in large flocks in the canopy of trees. 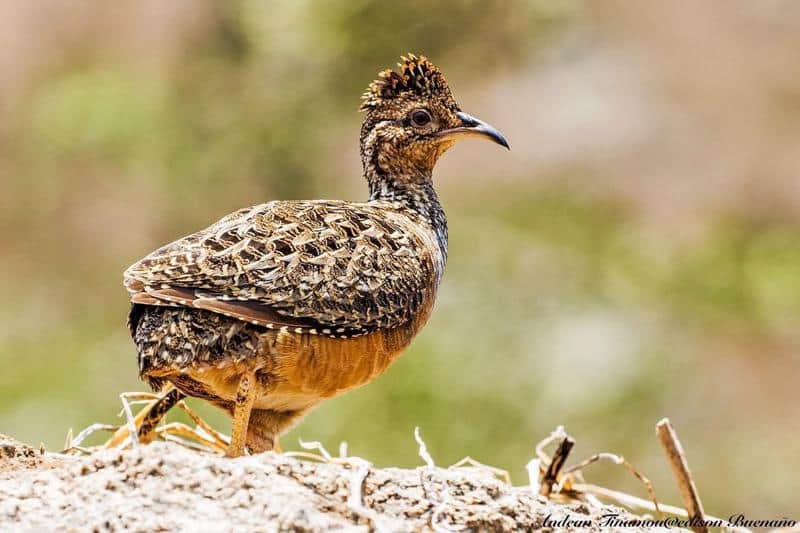 The plumage of this species is mottled brown over most of the body, with a pale white underbelly and a spiky, brown crest on the head. It tends to forage in open areas of grassland and cropland and will employ a sudden, bursting flight accompanied with a high-pitched call when disturbed.

The chicken-like form, long neck and stubby beak of this species mark it as a member of the pheasant family. The Ahanta Francolin, or Ahanta Superfowl, can be found in western Africa from The Gambia along to the western side of Nigeria.

Their plumage is a dull brown and their bill and legs are colored red-orange. Normally this species is incredibly shy and hard to spot unless you happen to hear its rough, striking call which is often performed by two birds simultaneously.

You can find more information, images, and videos here. 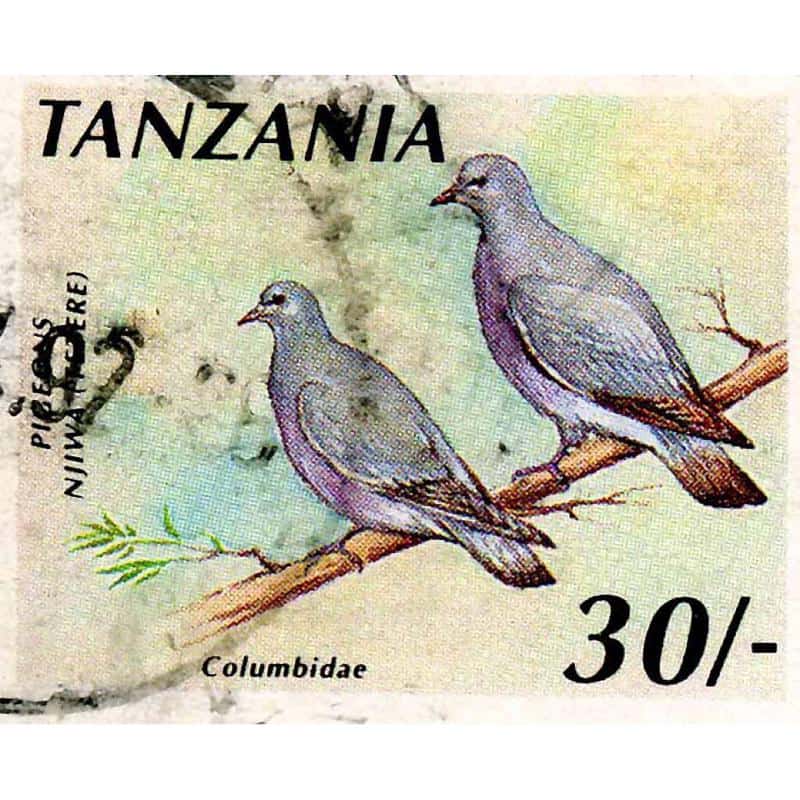 Also called the African Wood-pigeon or Gray Wood-pigeon, the Afep Pigeon can be found in some areas of Equatorial Forest across central Africa. Most of the plumage ranges from dark to pale grey but the red eye is striking in that it is surrounded by bright red bare skin also known as an orbital ring!

Often the easiest way to view this species is to check out isolated dead trees upon which an individual will often perch. The word ‘afep’ is the word for pigeon in Bulu language, the native language of the Bulu people who originate from Cameroon. These pigeons have been used on postal stamps in the past, emphasising local pride in this species. 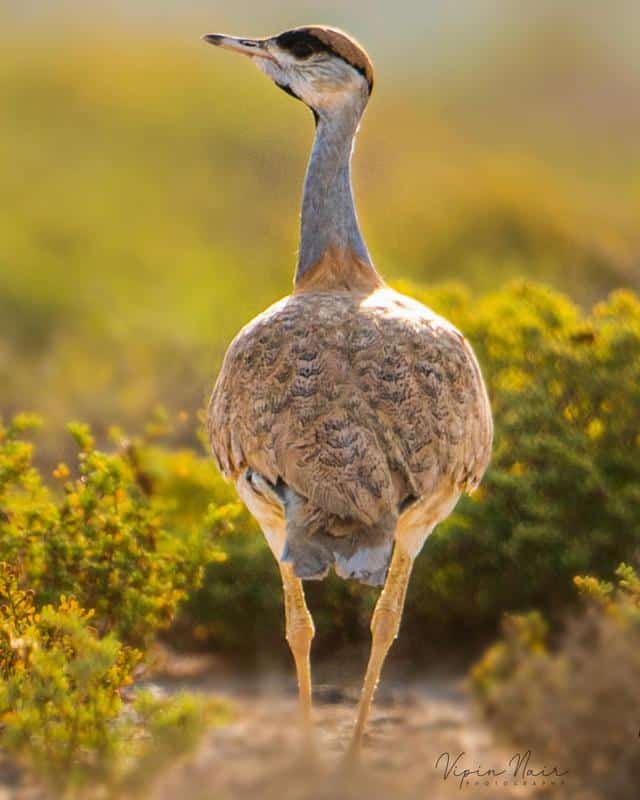 This tall, long-legged Bustard can be found in dry habitats including savannah, dry grasslands, and desert areas across the Sahel area of Africa as well as in Morocco and on the Arabian Peninsula.

Arabian Bustards are normally found in pairs or family groups. They form scrapes in the ground which serve as nests and lay just one or two eggs which they guard fiercely. Females have been observed to display distraction or diversion behaviour if threatened whilst incubating the eggs.

This species is classed as Near-Threatened by the IUCN due to hunting pressure and habitat loss which have caused a significant decrease in population numbers.

In Europe, there are at least 930 species to be found, and in Asia a whopping 3824 species! It is important to remember that taxonomic discoveries and appraisals are constantly being made, which may alter the exact number of species extant today. Excitingly, scientists are continuously gaining more knowledge and understanding from a range of sources including modern genetics processing and the fossil record. 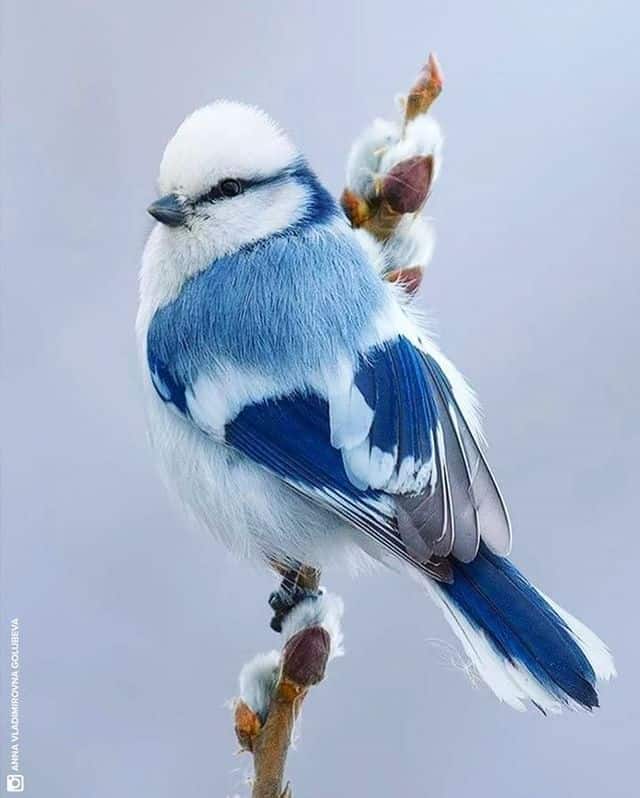 A stunning little bird with plumage ranging from pale, powdery blue to royal blue flight and tail feathers. The Azure Tit has a vast range through Russia, central Asia, and some locations in central Europe and Scandinavia. However, it can be incredibly shy, so sightings are rare.

It can be found in woodland in temperate through to subarctic regions. Nests are constructed in cosy tree holes and eggs will be guarded fiercely by the parents through hissing and even biting when a predator approaches. 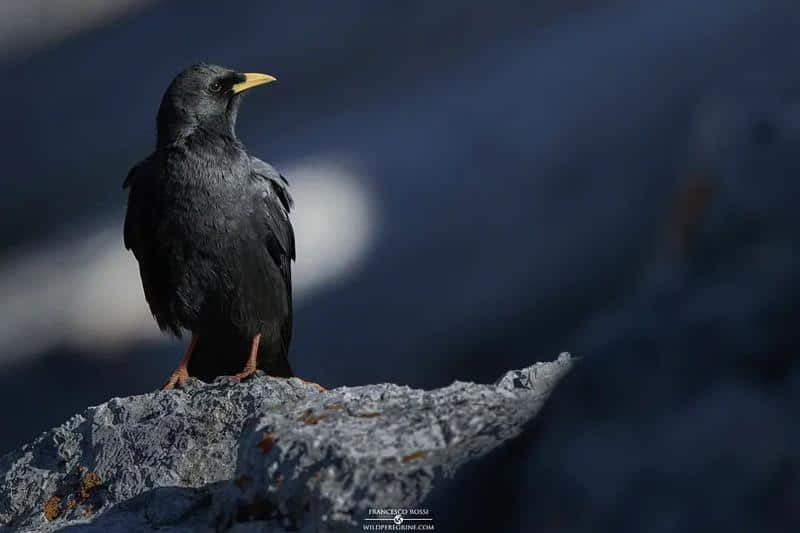 The Alpine Chough is a smart-looking bird with coal black plumage and contrasting orange-yellow beak and legs. If you have ever been to a ski resort in Europe, you may be familiar with this species which opportunistically feeds on scraps of food and has become quite tame in these areas.

This species can be found in mountainous areas from Spain all the way to Nepal. In fact, their nests are some of the highest altitude nests of all bird species – even the eggs are adapted to the thin atmospheric conditions. Alpine Chough eggshells contain fewer pores compared to species which nest at lower altitudes – this helps them retain more oxygen and prevent inevitable water loss, very handy when your nest can be found in a rocky crevice up to 21,300 feet (6500 metres) above sea level!

Read more about this species here. 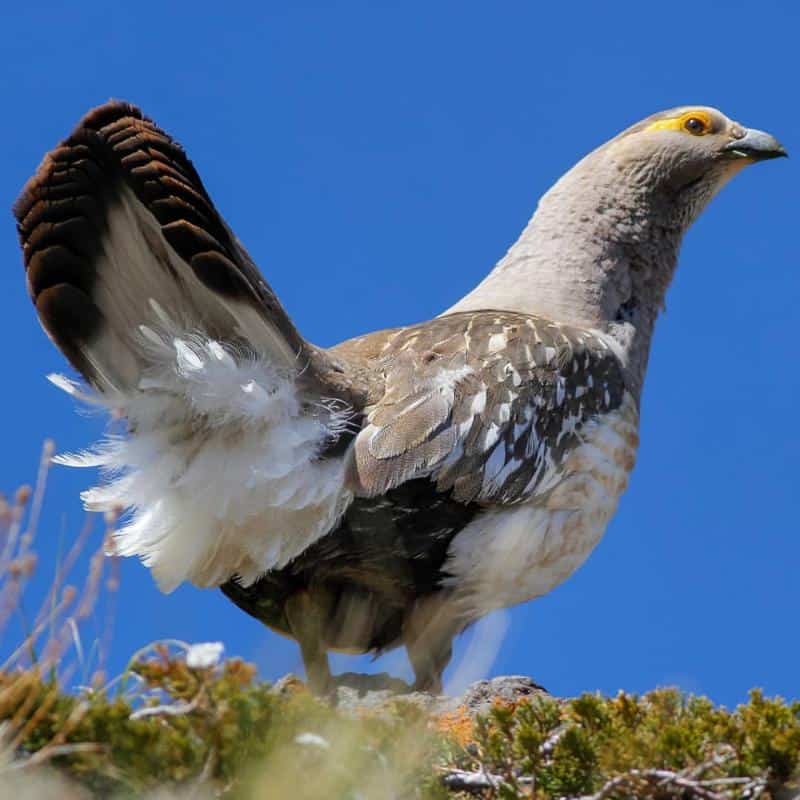 A stocky, hardy species of mountainous areas of boreal forest, the Altai Snowcock can be found mainly in Mongolia, and over the border in Russia. This species has a darker brown-grey body and lighter grey neck and head, with a distinctive yellow band across the eye.

Altai Snowcocks forage for berries, buds, fresh shoots and roots, and has been known to hunt small rodents. These partridge-like birds are weak fliers, only able to make descending flights – when they must travel up slopes they choose to walk instead. 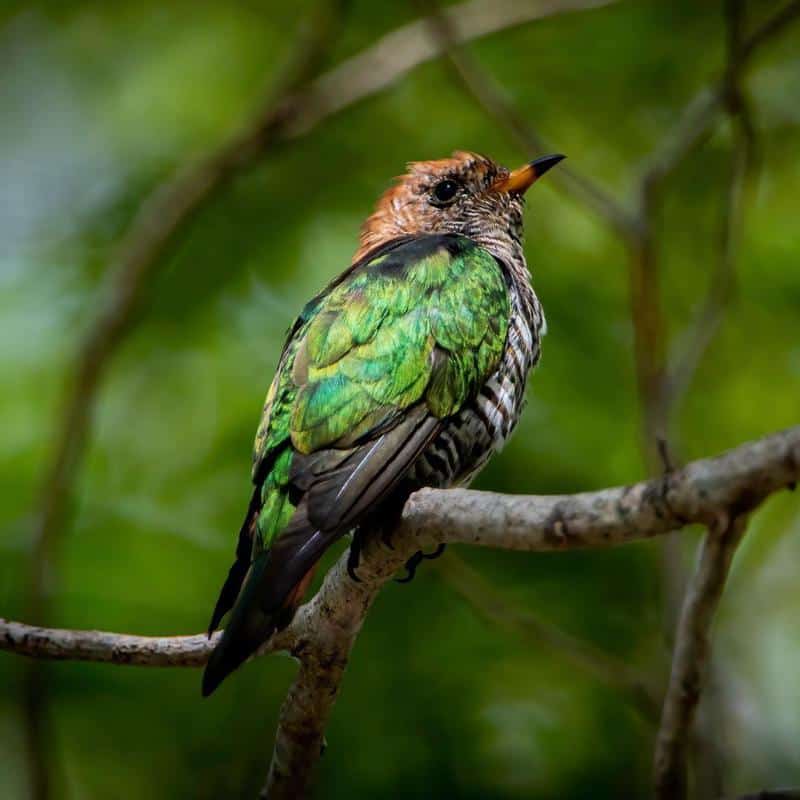 The Asian Emerald Cuckoo certainly lives up to its name with eye-catching iridescent emerald plumage found on both the males and females. The males of this species sport a striking red orbital ring around the eye. Females tend to have iridescent, rusty orange heads and speckled white and brown faces. Both genders appear to be wearing black and white striped trousers!

As with many cuckoo species, the Asian Emerald Cuckoo is parasitic on the nests of Sunbirds and Spiderhunters – it will remove one egg from the nest of the host birds and lay one of its own eggs instead, to be raised by the host birds. Very sneaky!

If you are interested, you can find out more here.

Also Read: Top 33 Birds That Start With P (With Pictures)