Whether you’re a keen bird watcher or an interested amateur, it can be very exciting to see a flash of red darting about the bushes or in the tree tops. Red-headed birds are distinctive and widespread, with many fantastic examples particularly in North America.

Notably, there are several woodpecker species with vivid red heads or at least red caps. We’ll be taking a special focus on these, as well as looking at some other interesting examples of red-headed birds. We aim to help you learn more about red coloration in birds, and help you to identify some eye-catching species of birds with red heads.

Bur first, let’s take a closer look at why some birds have red heads. For instance, where does the red coloration come from? And does it have a special purpose? Join us to find out more…

Bright red coloration in birds comes from carotenoids – a type of pigment found in some plant materials. Plant parts like berries and seeds often contain these pigments, which are first stored in the liver, and then transferred via the bloodstream to the feathers. Here, the pigments crystallise and are deposited in the feathers. Carotenoids can also be obtained when birds consume insects and invertebrates which have fed upon plant materials.

Usually, brighter colors indicate better health and good fitness because bolder colours mean the bird is successfully obtaining a good diet. This is another reason than bright colors have persisted through evolutionary time. It is usually male birds which possess brighter colors than females, and commonly perform displays during the breeding season to attract potential mates. Females will select males with the brightest plumage (or in this case the reddest heads) because it is an indication of the good health of the male. This means the chicks they produce are more likely to survive, and the strong, healthy genes are passed down through generations. This is an example of sexual selection.

Why Do So Many Woodpeckers Have Red Heads?

You many have noticed that, in general, woodpecker plumage is composed of the same three colors – black, white and red. Those species that tend to climb trees more often than perching in branches usually possess red heads or red caps.

Interestingly, although many woodpeckers may look similar, they are not closely related at all. The evolution of a red head or cap in separate species or genera of woodpeckers could be an example of convergent evolution. The theory behind this is that these species evolved in similar environments and experienced the same conditions (e.g. faced the same types of predators, similar climatic conditions) but in different places. This may have influenced the evolution of similar plumage coloration.

In one study of Middle-spotted woodpeckers, researchers discovered that the brighter the woodpecker’s cap, the better condition it was in. Birds with brighter red caps also raised larger broods of young.

Another theory suggests that interspecific mimicry could be a factor here. This means that some woodpecker species may have evolved alongside other species which were particularly aggressive or territorial. If these aggressive species possessed a certain coloration, it would benefit the more placid and defenceless species to look like them. This would mean predators and bird rivals are more likely to avoid them, because they link the coloration with the aggressive species. The placid species also benefit because they do not need to be aggressive to defend their territories or young, they can just rely on looking like their angry cousins!

3 Examples Of Woodpeckers With Red Heads 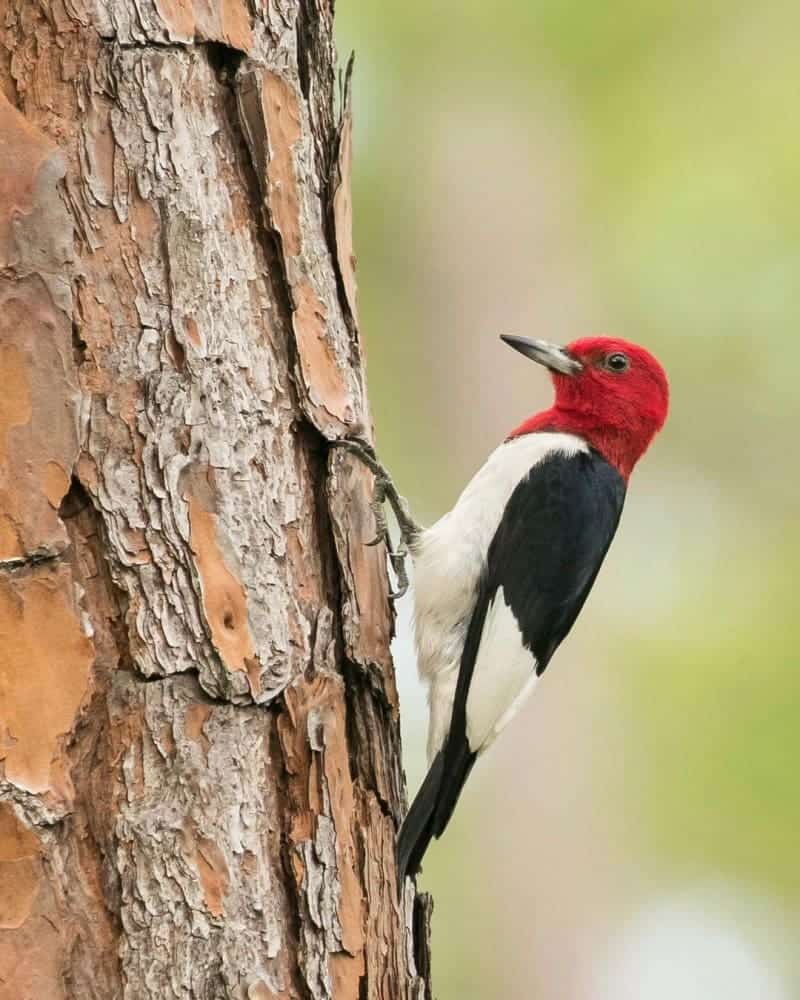 A fantastic example of a red-headed bird, the Red-headed woodpecker sports a vivid crimson head and a striking black and white body and wings. Both mature males and females possess the red head, while juveniles have brown heads, and brown and white plumage.

The Red-headed woodpecker can be found throughout much of the United States and southern Canada, in open forests including plantations and swampy areas. Like many woodpeckers, this species will create cavities in trees and use these as nests. They will hammer trees to find insects and may also catch them on the wing. They tend to cache nuts in fall, ready to feast upon during hard times. 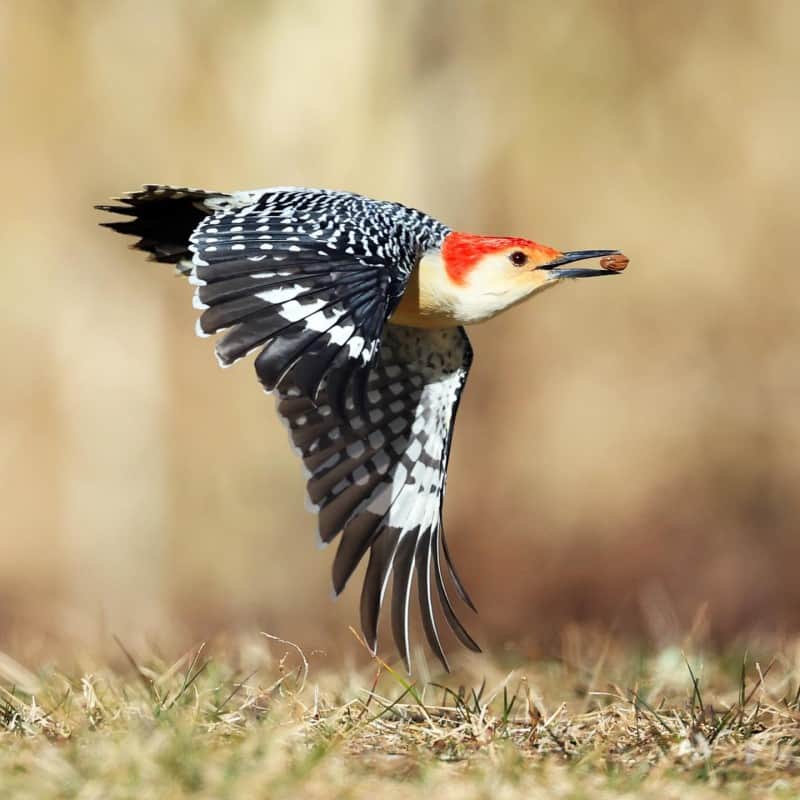 Although the common name suggests a red belly, this is characteristic that is very unusual in this species! Much more striking is the red cap found on the top of the head and running down the necks of both the mature males and females. This species boasts beautiful speckled black and white wings, and a pale cream face, breast and underbelly.

Red-bellied woodpeckers can be found in forested areas of the eastern half of the United States. They can be a common visitor to bird feeders in some areas where they prefer to snack on suet and peanuts. When foraging, they probe dead trees for insects, feed on berries, and sometimes have been observed feeding on the ground.

This species is considered as useful to humans because it preys upon the invasive Emerald ash borer, a beetle which feeds on ash trees and can damage them substantially.

More information about this woodpecker here. 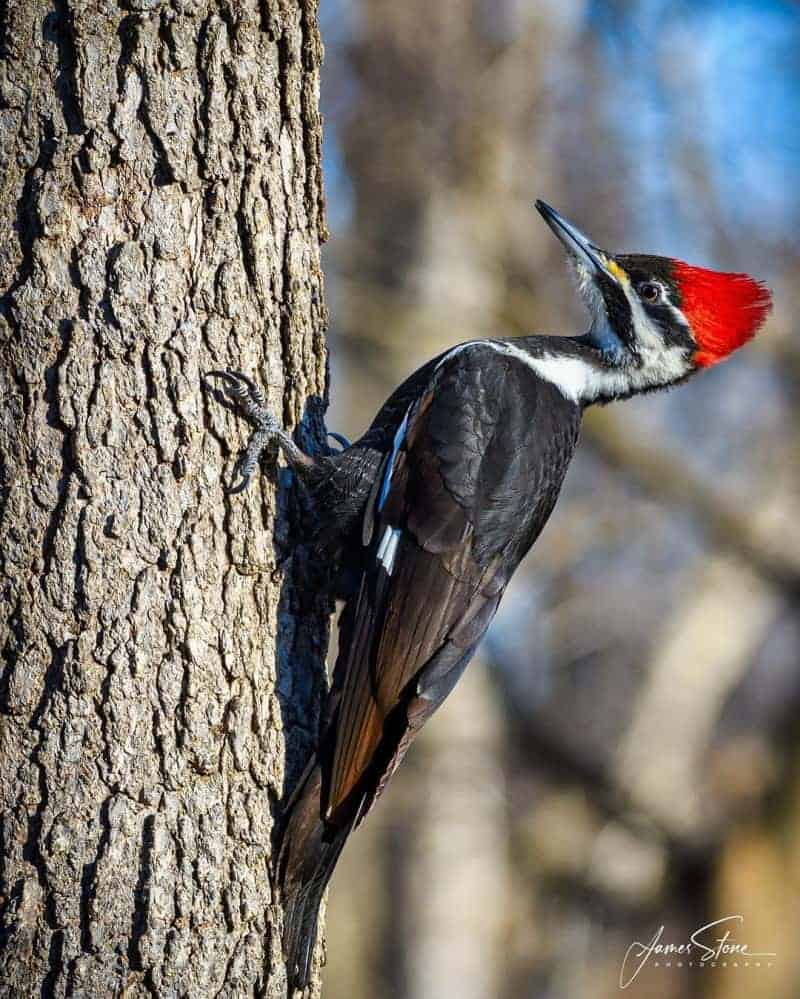 An unmistakable, comical species of woodpecker sporting a bright red ‘mohawk’, the Pileated woodpecker is mostly black with some white striping and white inner wings. Both the male and female possess an incredible red crest, and nest in pairs in mature deciduous or coniferous woodlands. It can be found through southern Canada, on the north-west coast of the United States, and on the eastern side of the United States.

The Pileated woodpecker is one of the largest woodpecker species, almost as big as a crow! The main food source they forage for is carpenter ants inhabiting dead wood. They will peck a characteristic rectangular hole in the wood, and this can be an indicator that the species is present in a woodland.

2 Examples Of Sapsuckers With Red Heads

Although incredibly similar-looking to a woodpecker, and included in the woodpecker family, sapsuckers have some slightly different characteristics. As the name suggests, they peck trees to obtain sap rather than to find insects. They also tend to drill rows of small holes in their quest for sweet sap, rather than creating larger holes like woodpeckers. This group of birds is found in North America. Find out more about the distinction between these groups of birds here. 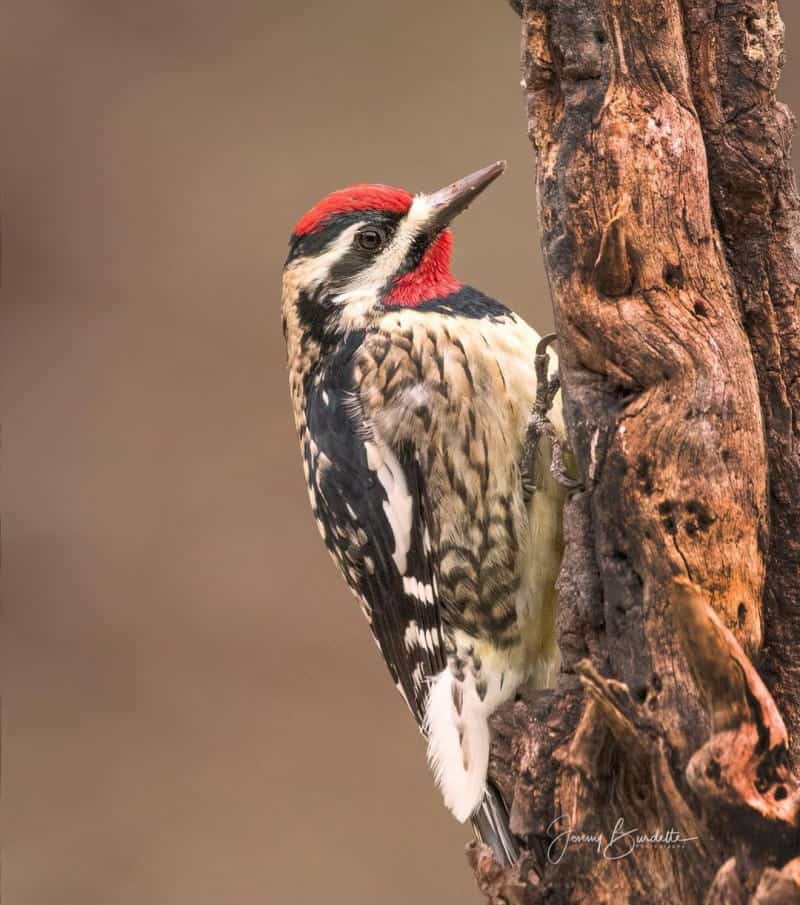 This species is widespread throughout North America. The Yellow-bellied sapsucker sports a red cap in both males and females, and a red throat only in males. Juveniles lack the red until they reach maturity. The common name ‘yellow-bellied’ can be misleading as this feature can either be difficult to sight or absent.

Yellow-bellied sapsuckers breed in northern boreal forests, and migrate to overwinter as far south as Costa Rica. As well as sucking sap, this species will consume small arthropods, nuts, and fruits. 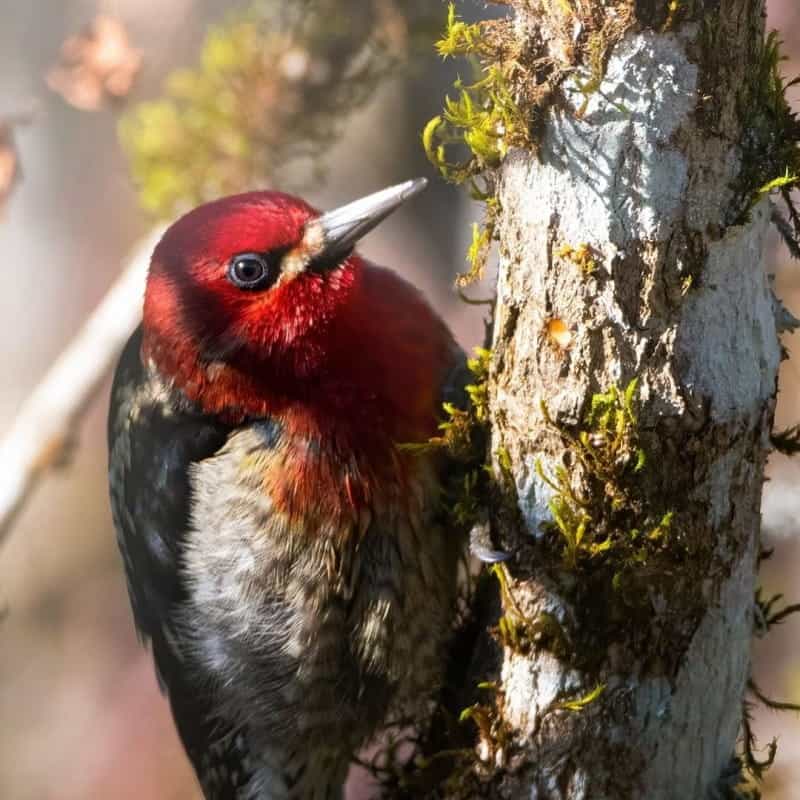 This striking sapsucker species can be found along the western edge of North America. The ruby red head and throat of both the mature males and females is distinctive in the Red-breasted sapsucker, but absent in juveniles.

This species can be found mostly in coniferous forests and groves of aspen. It is closely related to the Yellow-bellied sapsucker and was thought to be the same species for a long time. This species sometimes drums on dead wood as a form of communication with other individuals of the same species.

4 Examples Of Other Birds With Red Heads

It’s not only North America that is blessed with stunning red-headed birds, there are examples all over the world. Here, we have picked a few of the most eye-catching species… 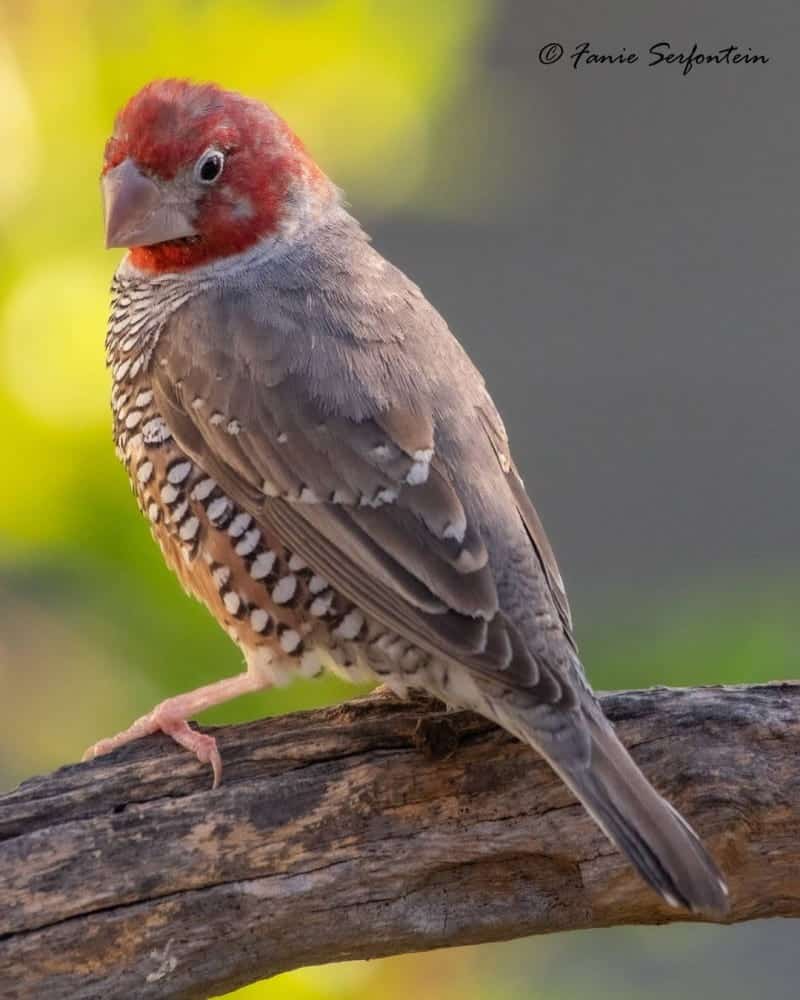 This stocky example of a waxbill is mostly brown-gray with a barred black and white pattern on the belly. It is only the males of the Red-headed finch which boast a rusty red head, the females’ heads are brown-gray. The Red-headed finch can be found in South Africa, Botswana, Namibia, and the coast of Angola. This species looks incredibly similar to the Cut-throat finch, but can be distinguished by the complete red head covering as opposed to the red throat in the Cut-throat finch.

In the breeding season they occupy arid thorn scrublands, but will inhabit grasslands, deciduous woodlands and agricultural land in winter. They feed on the ground, and can often be sighted at waterholes amongst other bird species in a mixed flock. 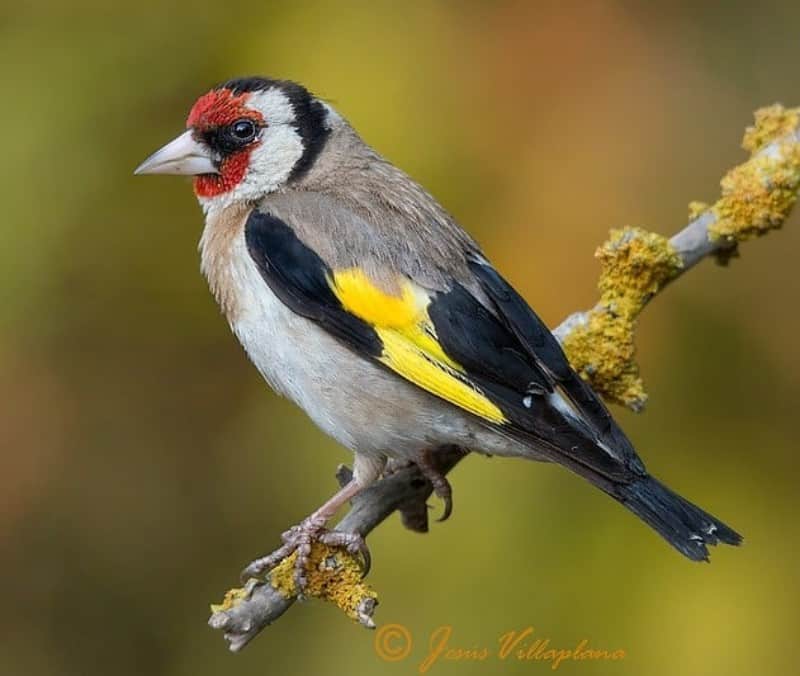 Perhaps better described as a red-faced bird, the mature males and females of the European goldfinch have a dark red face ‘mask’. However, the red area on females is smaller. The rest of the body is mostly a buff brown colour, while the wings are black and yellow.

The European goldfinch is widespread through Europe, some parts of Asia, northern most Africa, southern Australia, and New Zealand. This species inhabits a range of open areas from farmland, parks, open woodlands, and gardens. They are particularly fond of thistle seeds and can be seen hanging precariously from thistles in the fall and winter. 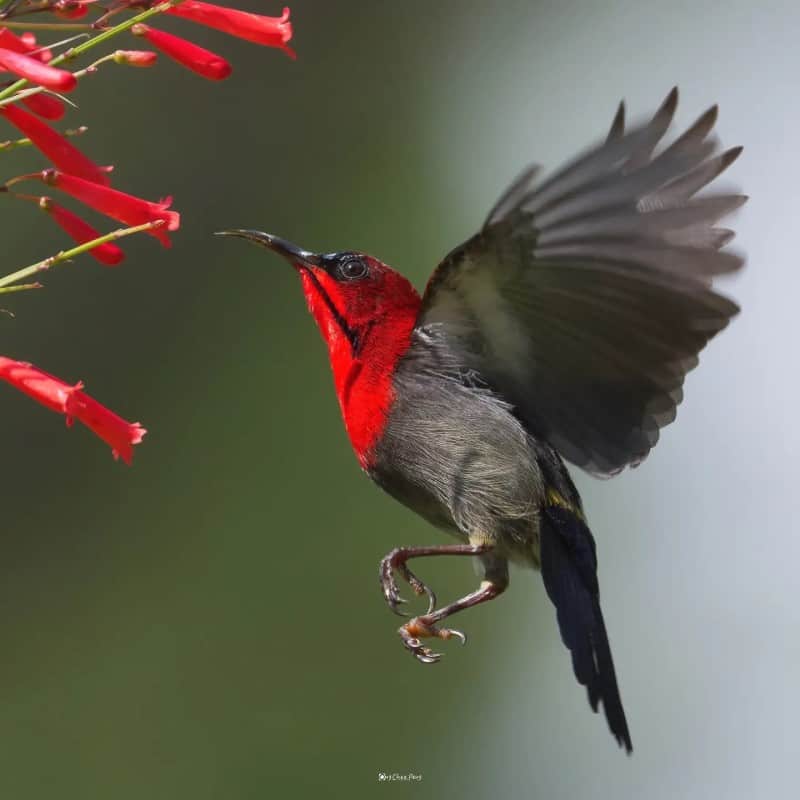 A fairly common bird throughout its range in south-east Asia, the Crimson sunbird males have an orange-red head and shoulders, and a brown-gray body. The females sport some red on the breast, but are mostly an olive-green and gray colour. Like many sunbirds, the Crimson sunbird feeds primarily on nectar, but will sometimes forage for insects.

Their short wings and agile ability makes them perfectly adapted to hover like hummingbirds, or perch and skilfully drink the nectar from flowers. This species can usually be found in forests, gardens, and agricultural areas. 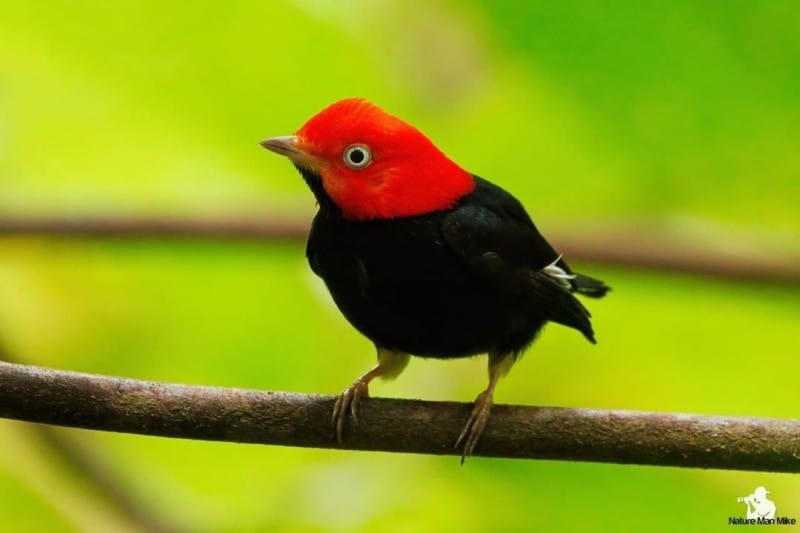 The Red-capped manakin is an adorable-looking species, with a small ball-like form and rather fluffy black body. The scarlet red heads of the mature males, and bright yellow ‘trousers’ make them a distinctive bird throughout Central America. Females tend to be brown or olive-green.

This species favours humid, tropical and subtropical forests in lowland areas. Red-capped manakins are frugivores – consuming fruit almost exclusively. They are particularly notable for their ‘moon-walking’ ability. During courtship displays the male will exhibit himself in the hope of finding a partner, employing a backwards shuffle an the effort to impress!

Read more about it here. 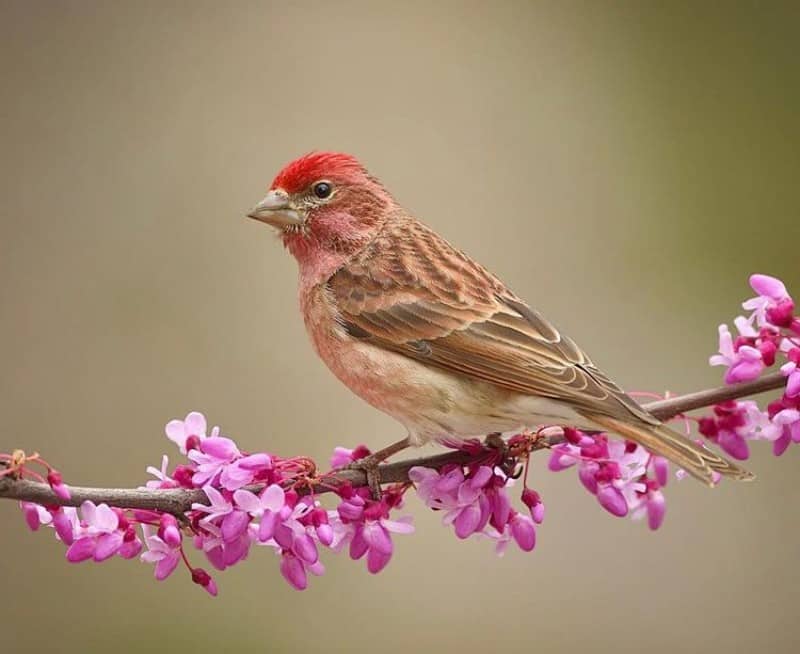 The mature males of this pretty finch have a pink-red head and a brown body with a pale gray belly. Females and immature males lack the red coloration, and tend to be gray-brown with paler, speckled bellies. Cassin’s finches can be found in mountainous regions of western North America, usually in coniferous forests.

In summer they tend to occupy areas of higher elevation, descending to the lowlands in the winter when temperatures drop. They forage usually in the tree canopy for buds, berries and seeds, in nomadic flocks. Sometimes they will even group their nests together, forming small colonies in coniferous trees.

More information to be read here.