Beaks are a type of mouth typical to birds, with toothless jaws covered by a layer of keratin.

Beaks have evolved differently for each bird species, adapting to have different functions for them and their environment: feeding (themselves and the younglings), building nests, regulating bird’s body temperature, grooming, mating, and defense.

This article is about the biggest and most spectacular beaks, so prepare to be amazed. 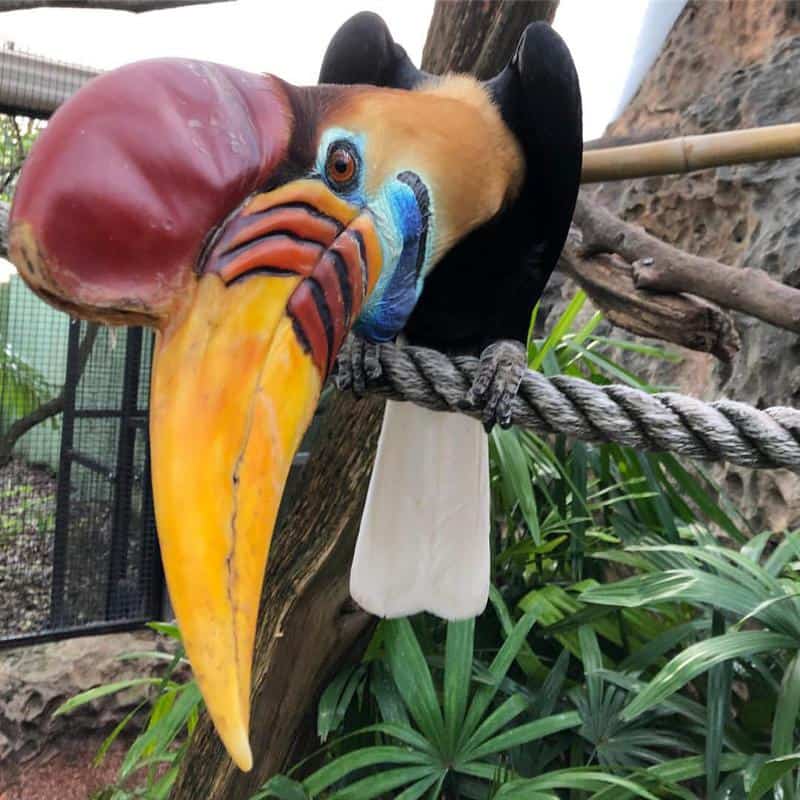 Knobbed Hornbill (Rhyticeros cassidix), also known as Sulawesi Wrinkled Hornbill, is a blackbird with white tail feathers, naked dark-blue throat, blue skin around the eyes, and a big yellow beak, with a knob on top of it.

The red “hat” on top of the big yellow beak, with orange ridges, gives Knobbed Hornbill a unique, unmistakable aspect.

Knobbed Hornbill lives in the canopy of Indonesian forest, and its diet consists primarily of fruits (figs), insects, other birds’ eggs, and even baby birds.

The breeding season is in June – July (the end of the rainy season).

Knobbed Hornbill searches a hole in a large tree in which the female seals itself using excrements, food, and feathers, leaving one tiny hole for the male to feed it and the younglings. 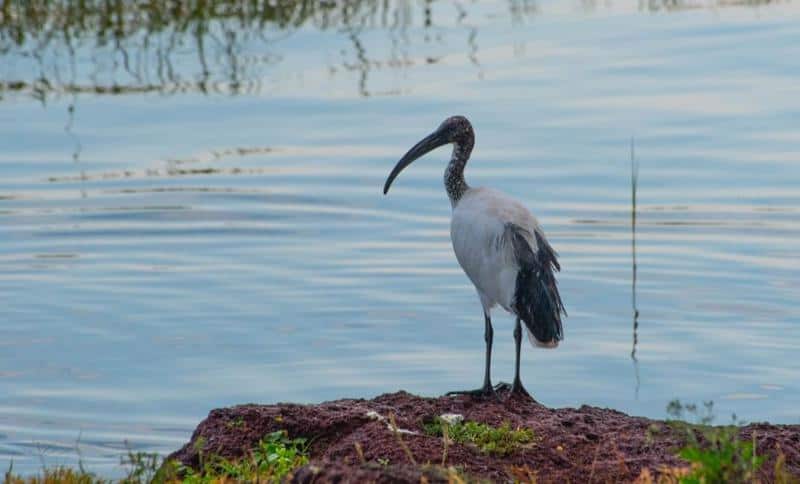 African Sacred Ibis (Threskiornis aethiopicus) is a white wading bird with a bald head and neck, white wings with a black stripe at the tips, black legs, and a long curved beak.

The long, slender, down-curved beak of African Sacred Ibis helps the bird probe into the sand and clay of depthless waters or in the green and dirt when foraging.

African Sacred Ibis prefers marshes and shorelines and is native from Subsaharan Africa, southeastern Iraq, and Yemen, but introduced in Europe and spread to Florida, Taiwan, and the United Arab Emirates.

The African Sacred Ibis is a carnivore bird, feeding with insects, their larvae, reptiles, fishes, frogs, and smaller birds.[2]

In Africa, the breeding season is from March to August, and in Iraq, from April to May; the African Sacred Ibis nests in colonies, usually in baobab trees.

The female lays 1-5 eggs/season in a nest made of sticks, and both parents incubate the eggs; after hatching, only one parent remains continuously at the next for the first week. 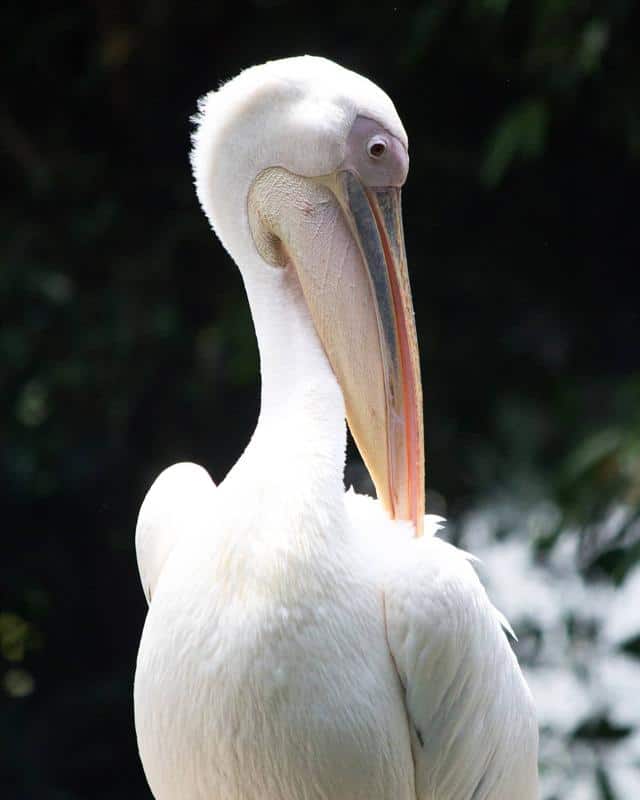 The Great White Pelican pushes its beak underwater, and the lower beak “spreads”, creating a pouch filled with water and fish; when the bird lifts its head, the “pocket” contracts, pushing the water out and keeping the fish.

With such fishing technique, the Great White Pelican needs warm freshwaters from swamps, marshes, deltas, and lakes (in Europe), and lowlands, freshwater or alkaline lakes (in Africa).

As you probably guessed by now, the Great White Pelican feeds with (big) fish (500-600 g), but it is also an opportunistic hunter of other birds’ eggs and younglings.

Breeding season is all-year-round in Africa and starts around April-May in the temperate climate of Europe.

The female lays 1-4 eggs (average of 2), and both parents care for the younglings. 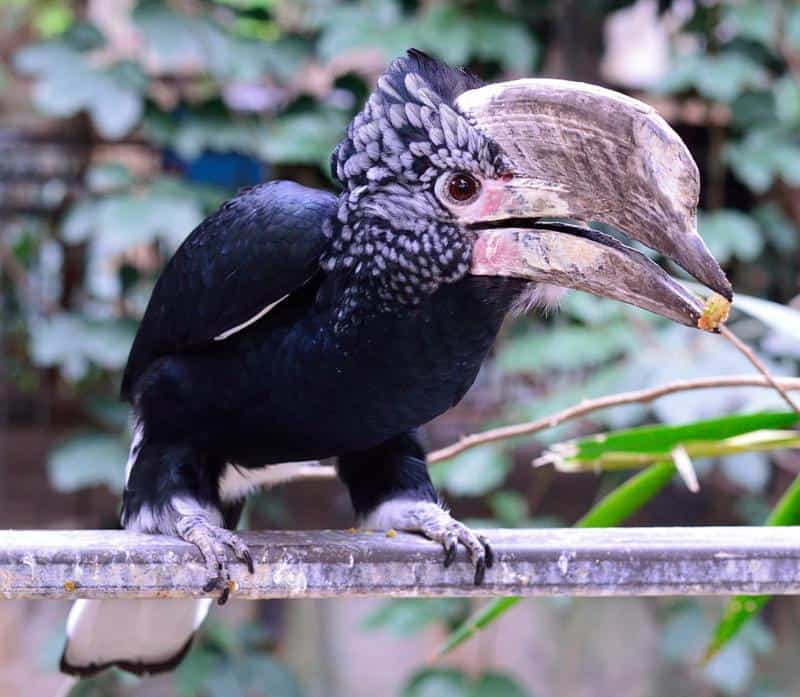 Silvery-Cheeked Hornbill (Bycanistes Brevis) is a giant hornbill with a silver-grey head, sparkly black (body), and white (lower back, thighs, tip of the inner tail feathers plumage, grey-blueish legs, and a prominent pale beak, with a bonnet on top of it.

The beak of the Silvery-Cheeked Hornbill is constructed to serve the bird’s omnivorous diet, based on fruits, insects, centipedes, small reptiles, and small rodents.

Silvery-Cheeked Hornbill lives in the canopy of the African forests, which offers it the necessary food supply. 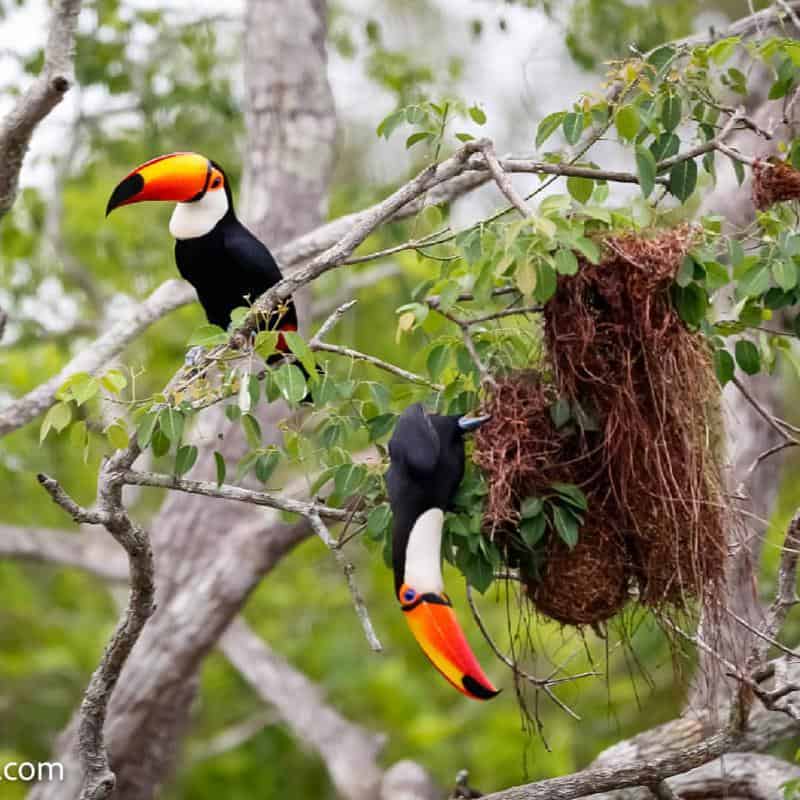 Although the beak is so big and looks heavy, it is hollow inside and pretty easy to “maneuver” for the bird; essential to mention is that the tongue has almost the same length as the beak, and it’s very flat.

Toco Toucan is also omnivorous, its long beak and long, flat tongue helping the bird to catch and swipe the food down the throat (fruits, insects, reptiles, smaller birds, and eggs).

The female Toco Toucan lays 2-4 eggs in a nest made high in a tree, in a found hollow, which the parents excavate to enlarge; they are known to nest in holes on earth banks or terrestrial-termite nests also.

Fun Fact: In its native region, the Toco Toucan is considered to be a reincarnated demon.[3] 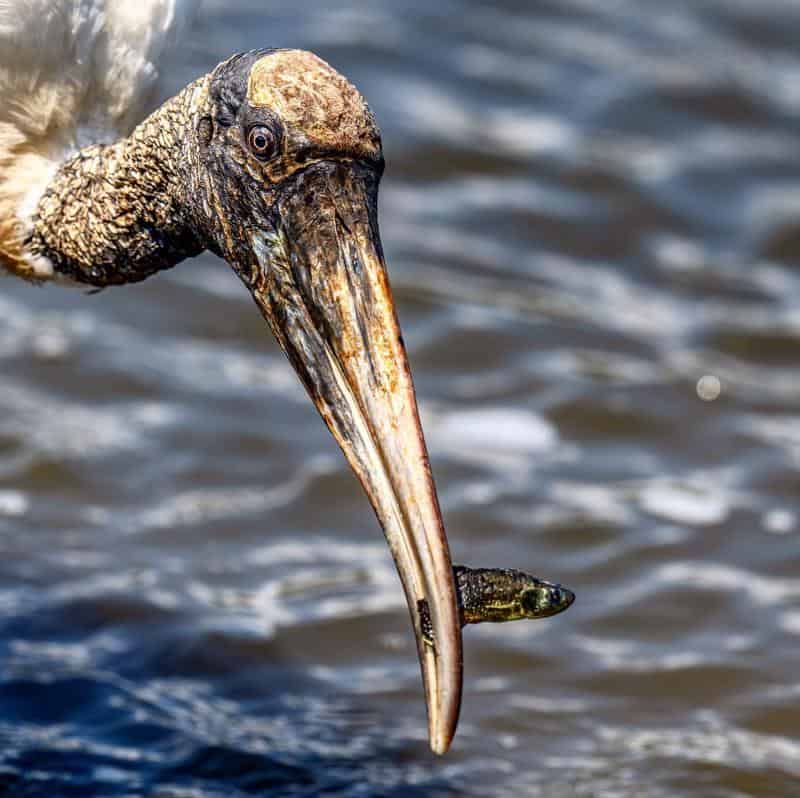 The Wood Stork uses its beak to fish with a unique and efficient technique: the bird sticks its open bill into the water and waits for fish to pass nearby; when it feels the fish, the Wood Stork snaps its beak closed fast  (up to 25 milliseconds fast), catching the prey. [4]

Indeed, the Wood Stork feeds on fish, but it supplements it with insects in the dry season and insects, crabs, and frogs in the wet season.

It inhabits the flooded marshes and depthless ponds, lowlands, and wetlands with trees in tropical and subtropical Americas (Carrabean included), South America, and North America (only up to Florida).

Wood Stork nests in colonies of up to 25 nests in one tree, and the nest itself is built by the male; the female lays 3-5 eggs, incubated by both sexes. 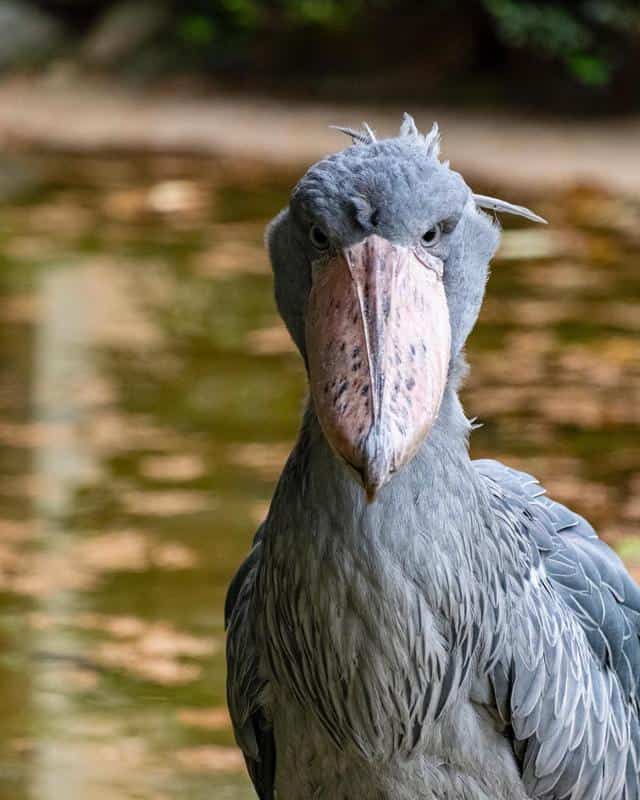 Grey Shoebill (Balaeniceps rex) is a grey stork-like tall bird with long legs and feet, whose most distinctive characteristic is its straw color with greyish spots bulgy beak.

The beak length is between 18.8 to 24 cm, making Grey Shoebill’ beak the third-longest bill (after pelicans and storks’ beak), although it can have a bigger circumference than the pelican’s.

Compared to its relatives, storks, Grey Shoebill is a solitary bird and builds less than three nests per square kilometer, defending a 2-4 square kilometers perimeter around it.

The couple builds together a 3 m platform out of water plants, on top of which they make a 1-1.7 m nest, and the female lays 1-3 eggs.

They partially submerge the platform underwater so that the nest can float, and both parents incubate the eggs and care for the younglings. 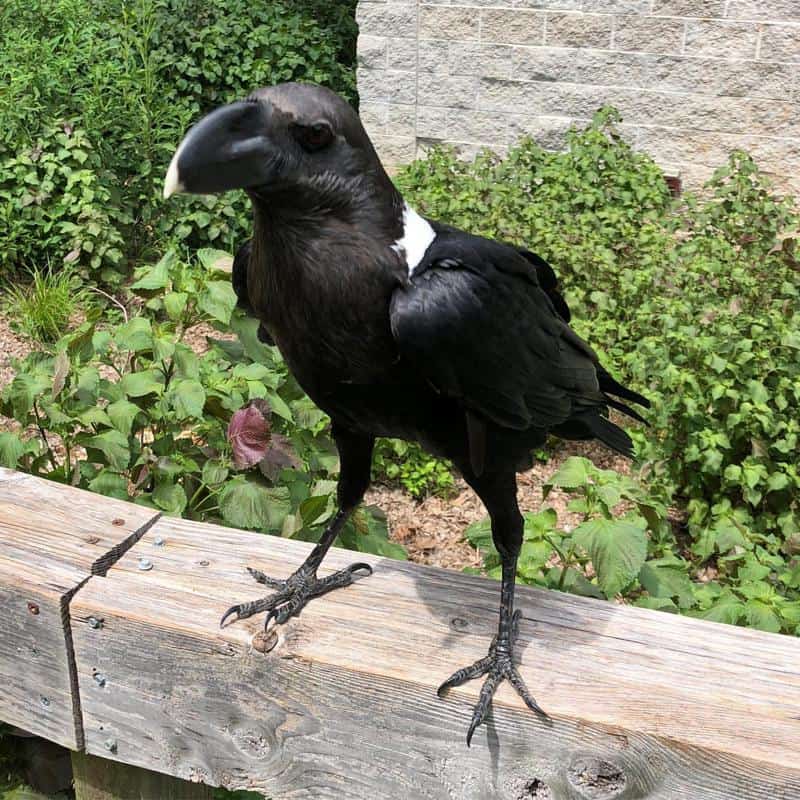 White-necked Raven (Corvus albicollis) is a relatively small black raven with a white stain on the back of its neck and heavy-beaked.

Compared with its relatives, it has a shorter tail than the common raven, and the beak is “deep”, with a white tip, arched almost as strongly as the thick-billed raven’ beak.

White-necked Raven prefers the open rocky areas of mountains and hills, often found in small towns or villages in eastern and southern Africa.

The diet of White-necked Raven is found mainly on the ground ( insects, small reptiles) and from the trees ( grains, peanuts), but they do not back off from human food or even pick up road kills.

White-necked Raven builds a bowl-like nest on the edges of the cliffs (rarely in trees), made out of twigs and sticks, padded with grass, hair, and wool, in which the female lays 3-5 eggs.

After leaving the nest, the younglings form flocks until they are completely mature to make pairs and set territories. 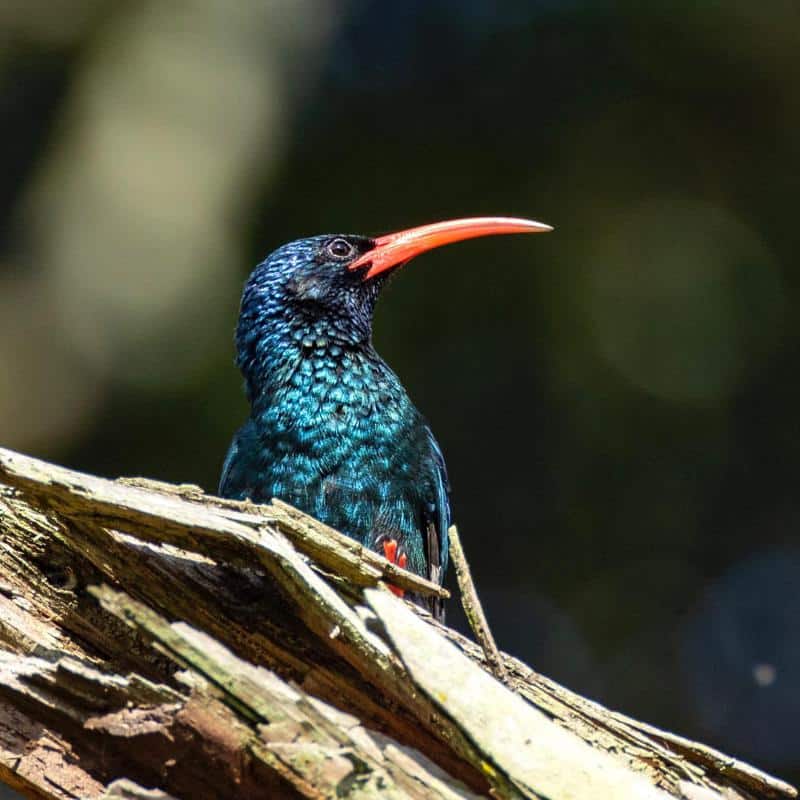 Green-wood Hoopoe (Phoeniculus purpureus) is an elongated black bird with a cape of blue, green, purple, and yellow feathers, red legs, and a long, red beak.

Green-wood Hoopoe is distinguishable by its thin, downcurved, bright-red beak, the white marks on wings, and tail edges.

The Green-wood Hoopoe is an insectivore bird that finds food on the soil, in termite mounds, and the bark of wood trunks.

The habitat of the Green-wood Hoopoe includes savanna, woods, fluvial forests, and suburban gardens from Africa.

The Green-wood Hoopoe lives in “families” of approximately a dozen birds, with only one breeding pair.

In the nest (nothing more than a natural tree hollow), the female Green-wood Hoopoe lays 2-4 eggs and incubates them for 18 days.

Other birds feed the mother bird (and then the younglings) even after they leave the nest, behavior which classifies Green-wood Hoopoe as a cooperative breeder. 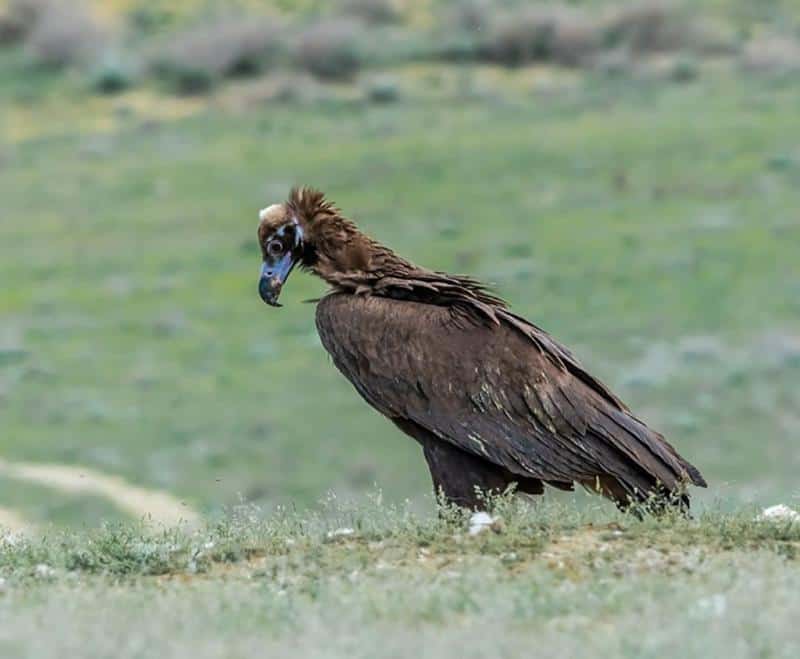 Cinereous Vulture (Aegypius monachus), also known as “black vulture” or “monk vulture”, is the heaviest and largest raptor bird ( from 6.3 to 7 kg weight, between 98 and 120 meters in length, and reaching up to 2.5-3.1 meters with wings wide open).

Cinereous Vulture’s plumage is dark-brown, except for the head covered with grey down feathers in adulthood.

The bird has blue-grey legs and a blue-grey beak so big that it is one of the most prominent beaks from its family (Accipitridae) and looks even more enormous in contrast with the typical skull size of this species.

Cinereous Vulture prefers the silence and serenity given by the mountains, where it seeks dry open areas or pastures in forests, as far as possible from the human disturbances.

Eurasian species, Cinereous Vulture, can be found in France, Portugal, and Spain, Greece, continuing in Turkey and throughout the Central Middle East, east of Afghanistan, northern India, and central Asia, where they breed (in Korea, Mongolia, and north Manchuria).

The mating ritual involves couples dancing in flight (but dances between younglings and pairs are not excluded), and the breeding season lasts from February to October.

Although some birds have no problem nesting directly on cliffs, most of the Cinereous Vulture prefers to make their nest in the branches of the cliff trees, such as juniper, oak, almond, or pine trees, and wild pear.

Both partners build the nest from twigs and sticks, and it increases its size over the years as the couple use it and “upgrade” it with droppings and animal skin.

Female lays a single egg (two in extraordinary cases), and both parents share incubating and raising the younglings.

Although their diet makes them the “cleaning crew” of the environment, in the last two hundred years, the Cinereous Vulture population decreased because of poisoning, habitat destruction, and reduction of the food supply. In some countries from Europe, it has already become extinct. [6]