Get comfortable because you are about to be astonished by the appearance of these blue, flying wonders.

The blue feathers present in all or part of the plumage of some birds are not related to the birds’ diet, as it has been proven that the stomach chemicals dissolve the blue pigments contained by fruits, for example (blueberries).

Thus, blue pigments do not even reach into the bird’s circulatory system, so do not spread through its body and color its feathers or other body parts.

Then where does the blue color of birds’ feathers come from?

The blue color of feathers is related to the way in which the keratin protein disperses the light. Because they have the same (long) wavelength, red and yellow cancel each other when light strikes.

Only blue remains reflected, having a shorter wavelength than these two colors.[1] 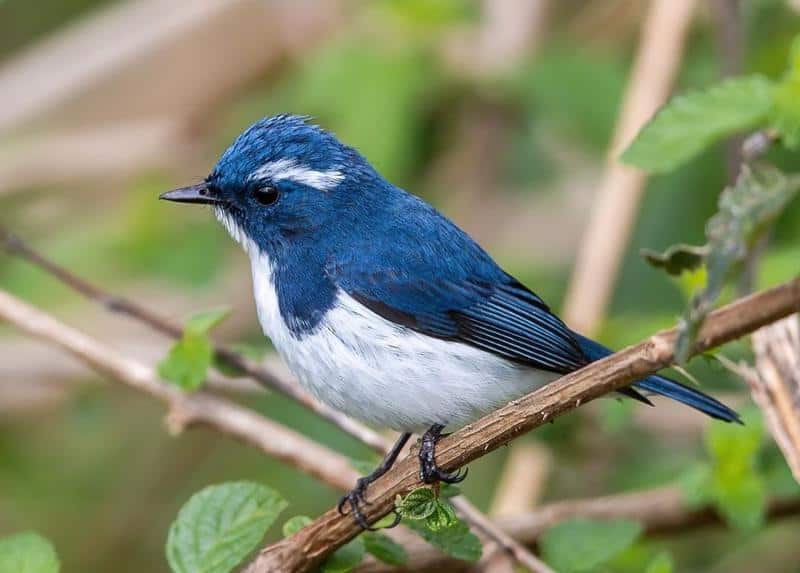 The Ultramarine Flycatcher (Ficedula superciliaris) is a small flycatcher (smaller than a sparrow) with different plumage between males and females and a characteristic white stripe above the eyes.

The male has electric-blue plumage on the head, neck, and upper side of its body, and a bright white patch from the middle of the neck, through chest and belly.

The female has dark grey-brown instead of electric blue, and the white parts are duller.

The Ultramarine Flycatcher lives in mountains and hilly forests (pine and broadleaf) of the Himalayas and migrates to southern India in wintertime.

As its name suggests, the Ultramarine Flycatcher is an insectivore, foraging insects from the thick forest.

The breeding season lasts from middle April to early July, and the female lays 3-5 eggs in a soft nest made out of moss, fine strips of grass, hair and roots, usually in holes of trees (about seven meters high), or in a dent on a steep bank. 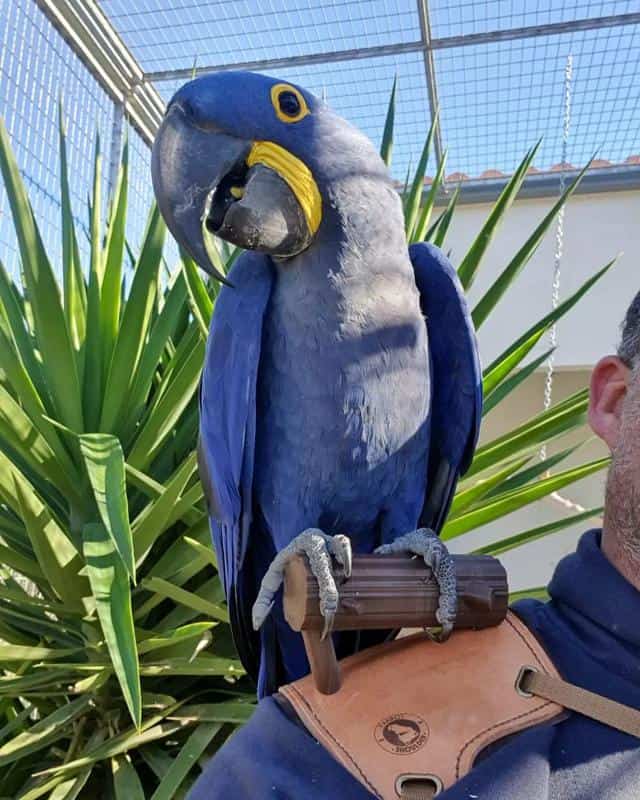 The Blue Macaw (Anodorhynchus hyacinthinus) is the largest flying parrot species, and the largest macaw (1 meter long and between 1.2 and 1.7 kg).

Also known as the Hyacinth Macaw, the Blue Macaw’s plumage is entirely blue, brighter on the upper side, maybe with a shade of grey around the neck in some individuals, with bright yellow around the eyes and in the laterals of the beak.

The Blue Macaw likes semi-open areas in general, but has a variety of favorite habitats: it prefers forests with a dry season that prevents the excessive growth of vegetation, deciduous woods, cerrado and palm plantations, and the palm-Savannas of Pantanal (Brazil), which is like a big luxury oasis for the Blue Macaw.

Most of the diet of Blue Macaw is palm nuts from two palm species (acuri and bocaiuva palms), and the bird usually harvests the nuts directly from the trees.

However, the Blue Macaw has another technique to feed itself, searching on cattle lands for cow dung containing undigested palm nuts. This means the nuts are easier to crack.

The bird supplements its diet with fruits, nectar, nuts, and seeds.

Although the Blue Macaw nests even on cliff fronts when constrained by the habitat, it usually makes its nest in tall, old trees (over 60 years old) in a pre-existing hole, which they enlarge and fill partially with wood bits.

The female Blue Macaw lays 1-2 eggs and incubates them for 25-28 days, spending about 70% of its time with the eggs and being fed by the male the entire period.

This speccies is a calm and affectionate bird, often called the “gentle giant”, and is very popular as a pet, despite its alarming decreasing numbers.[2] 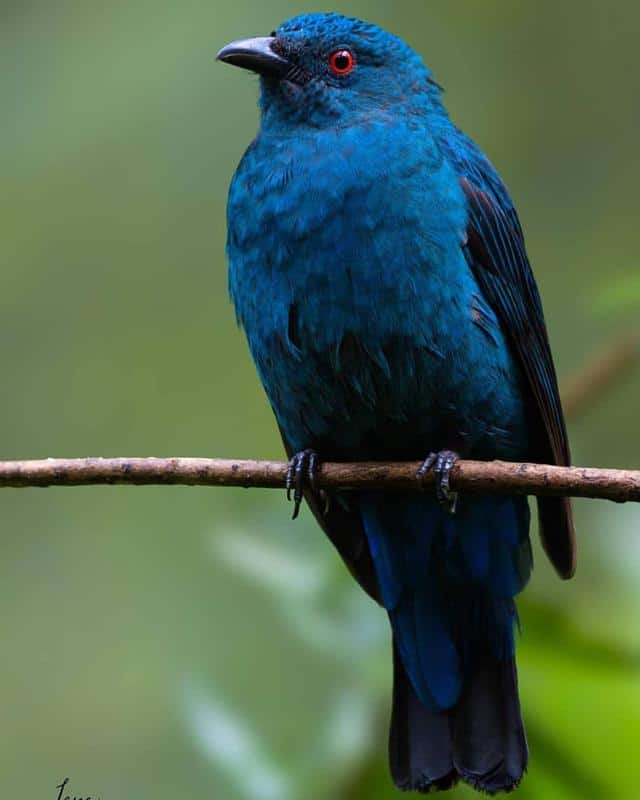 The Asian Fairy-Bluebird (Irena puella) is a medium-sized arboreal bird with noticeable variation in plumage colors between males and females.

The male Asian Fairy-Bluebird is an exquisite combination of pitch-black and electric blue, while the female is a mix of malachite and turquoise green.

Taking them in flight or when perching, the Asian Fairy-Bluebird feeds mainly on fruits (figs), nectar from flowers, and termites, rarely going down onto the ground.

There is not much known about the breeding behavior of the Asian Fairy-Bluebird, but male captive birds have been reported performing a mating ritual that ends with unison calls, mutual grooming, and even chasing between mates.[3] 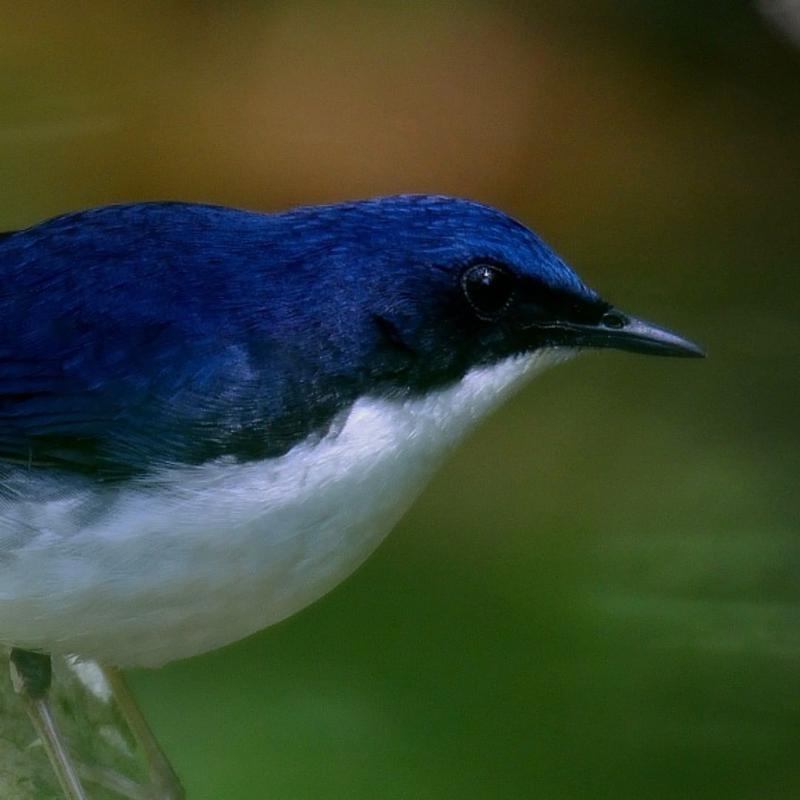 The Siberian Blue Robin (Larvivora cyane) is a small migratory bird with a notable difference in colors of the plumage between males and females.

The male Siberian Blue Robin has electric blue upperparts and white lower parts, separated by a black stripe from the eyes to the curve of the wing, while the female is more brownish with tinted blue on the upperparts.

As an insectivore, the Siberian Blue Robin feeds on the ground, searching for insects and spiders, but it also feeds on grains, seeds, and berries.

The Siberian Blue Robin builds a bowl-like nest, padded with grass, leaves, and moss at the base of a tree or another spot with similar protection.

The female Siberian Blue Robin lays 2-5 eggs that hatch in about twelve days; both parents take care of the feeding and raising of the younglings.[4] 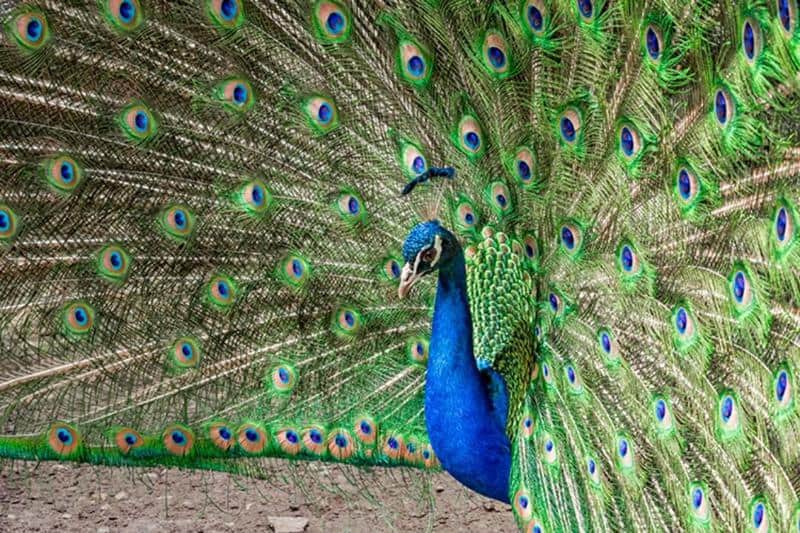 The Indian Peafowl (Pavo cristatus) is a large bird famous for its noble appearance and majestic tail.

Like the most of species we’ve been talking about, the male is the spectacular one, with a blueish-green crown, metallic blue, curly feathers on the top of the head, a bright blue neck and chest, golden feathers on sides and back, and a multi-color train with “eyes” on it.

The female Indian Peafowl (peahen) also has a crown, the tail is smaller, and the plumage is brown, with shiny green on the neck and white on the lower chest and belly.

Originally from the Indian subcontinent, the Indian Peafowl prefers deciduous forests, margins of forests, and farmlands, near a water supply.

However, the Indian Peafowl has been introduced in many other countries like the United States, Mexico, Honduras, Colombia, Brazil, Portugal, Croatia, Australia, New Zeeland due to their exquisite beauty.

The tail’s design, the richness of the color and how many eye dots it has on it, is directly connected to the health (immune system especially) of the bird; thus, during the wooing, the male displays its tail to prove to the female that it’s healthy and worthy for breeding.

The challenge for the male Indian Peafowl is that it has to spend a lot of time producing and maintaining good tail conditions and investing less time and energy in finding food or defense.

The length of the tail and the number of the eyespots can show past health conditions (fights or disease); obviously, the “most wanted” males are those with a rich, long tail and the highest number of eyespots.[5] 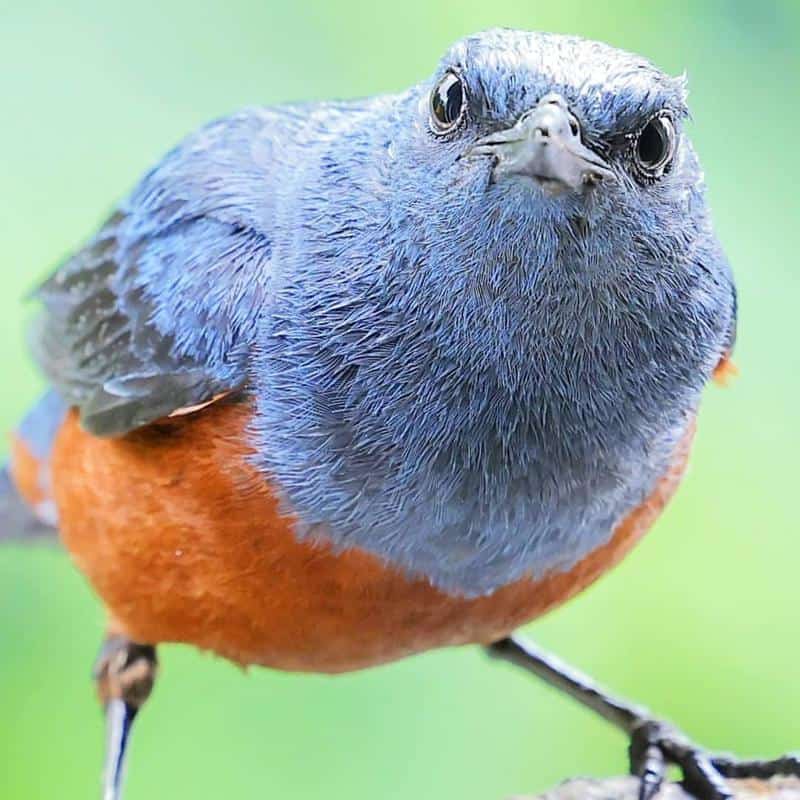 The female is less striking, with dark brown upperparts and mottled, pale-brown underparts.

Various subspecies of the Blue Rock Thrush are widespread around Europe, North Africa, and Southeast Asia (where they are residents); still, some Asian species migrate to sub-Saharan Africa, Southeast Asia, and India in the wintertime.

The Blue Rock Thrushes that choose to come closer to human habitats prefer churches and tall buildings, and they can be seen roosting on rooftops or wires.

This species is omnivorous, feeding itself with seeds, berries, worms, insects, spiders, and snails; in some areas, the bird is also known to consume snakes, lizards, and mice.

The breeding period of Blue Rock Thrush is approximately from April to July. The female builds a cup-like nest out of dry vegetation, in a rocky dent, or under a rocky overhang.

The female lays 3-7 pale blue-green, mottled eggs incubated for around two weeks, and both parents help raise the younglings.[6] 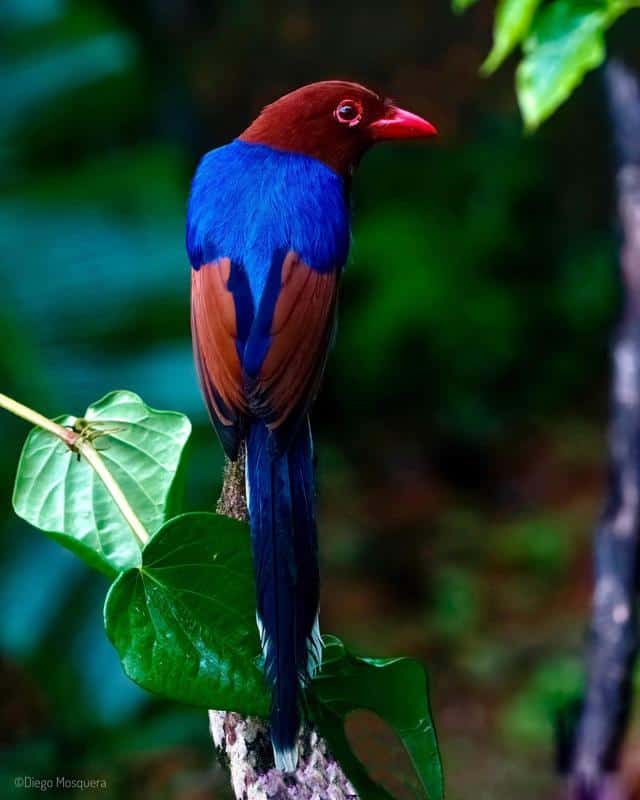 The Formosan Blue Magpie (Urocissa caerulea), also known as a “long-tailed mountain lady”, is a noisy and strikingly colored bird.

Formosan Blue Magpies live in the foothill of mountains and lowland forests, down to the gardens and parks of Taiwan, where it is endemic.

This bird has an unusual habit of storing leftovers on the ground (and covering them with leaves) or in the leaves or twigs of the trees.

The Formosan Blue Magpie is an omnivorous bird and a scavenger. Its diet consists of plants, seeds, fruits, small insects, eggs and chicks of other birds, rodents, snakes, human food waste, and decaying flesh of dead animals (carrion).

The breeding season of the Formosan Blue Magpie is from March to July, and the monogamous couple builds a bowl-like nest together in the large branches of trees at the edge of the forest, ideally backing onto meadows.

The female lays 3-8 eggs. Some couples breed a second time right after laying, and the parents get help from the other birds (younglings from the previous hatches) to feed the new baby-birds and defend them. 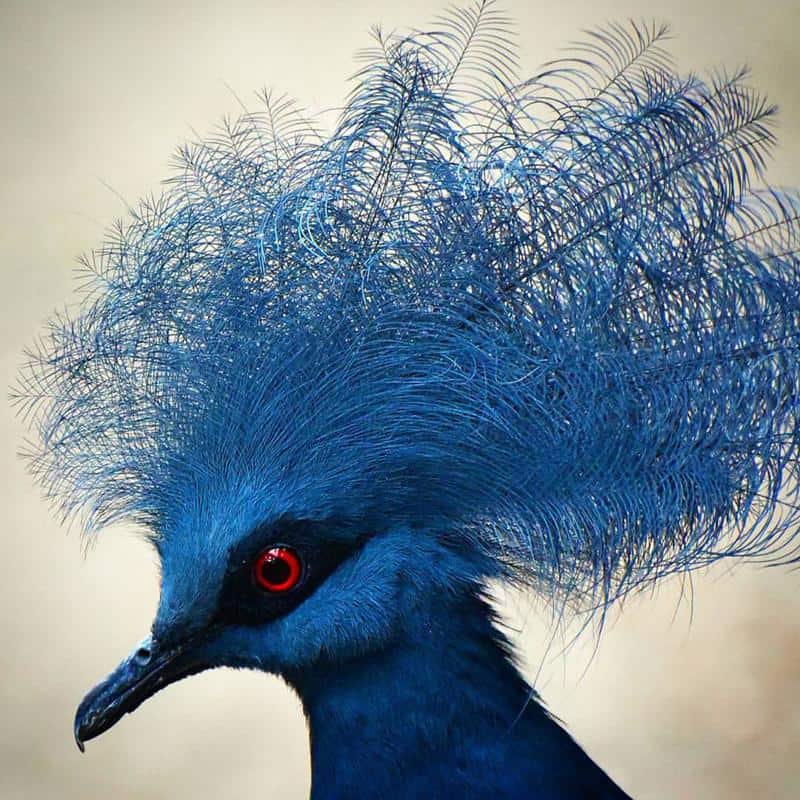 The Blue Crowned Pigeon (Goura cristata), also known as the Western Crowned Pigeon, is probably the largest pigeon in the world (approximately 66-70 cm in length and 2.1-2.5 kg weight).

The Blue Crowned Pigeon’s plumage is blue-grey, with a light-blue crest and a bright white patch surrounded by a reddish-brown patch; males and females are similar in appearance, except males are bigger.

The Blue Crowned Pigeon is endemic to the rain forests of Papua New Guinea.

Living in small groups of two up to ten birds, Blue Crowned Pigeons feed on the forest floor with seeds, nuts, fruits, and occasionally, snails.

Blue Crowned Pigeon males court by bowing and waving its tail to females. Although males sometimes breed with more than one female, they usually mate for life.

The Blue Crowned Pigeon female usually lays one egg which both parents incubate for about one month.

The youngling is fed a mixture called “pigeon milk”, produced from the parents by partially digested food. 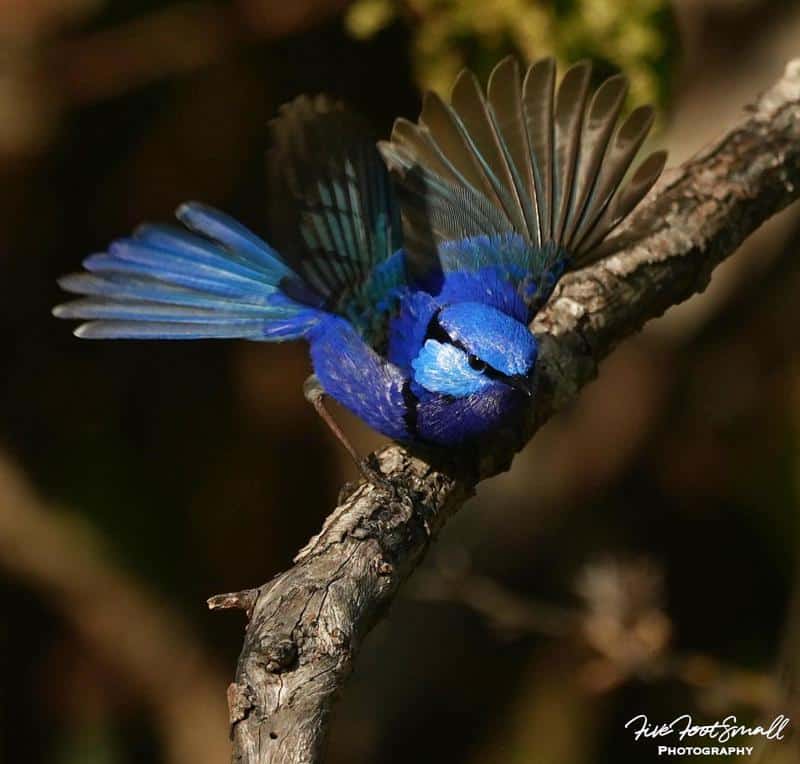 The male Splendid Fairy Wren is almost entirely blue, with a black line starting at the beak, continuing near the eyes, and joining behind the back of its neck.

The female Splendid Fairy Wren is a drab brown on the upperparts, with a pale blue tail and reddish beak.

The non-breeding male is brownish-grey with a bright blue tail and a little blue on the wings (visible when folded).

The Splendid Fairy Wren prefers dry and shrubby habitats in semi-arid regions of Australia, where it lives in groups.

The bird also feeds in groups, foraging for insects together on the ground or in shrubs.

The breeding period is between late August and January when the female Splendid Fairy Wren builds an oval, domed nest of dry grass, shreds of bark, spider webs, and roots, with an entrance on one side, close to the soil, usually covered with thorny plants.

The female lays 2-4 lays eggs and incubates them alone, but other birds from the group will help feed the younglings once they hatch.