Birds with long legs are usually carnivorous or insectivorous birds living in swamps, lakes, areas with a high level of humidity, and near water in general.

They feed on frogs, fish, insects, invertebrates, and other delicacies in the mud, sand and silt at the bottom and round the edges of water bodies.

The long legs help them keep their feathers out of the water and walk nimbly through the sludge when they seek food.

There are more species of birds with long legs, but in this article, we will present to you 10 of the most interesting long-legged birds. 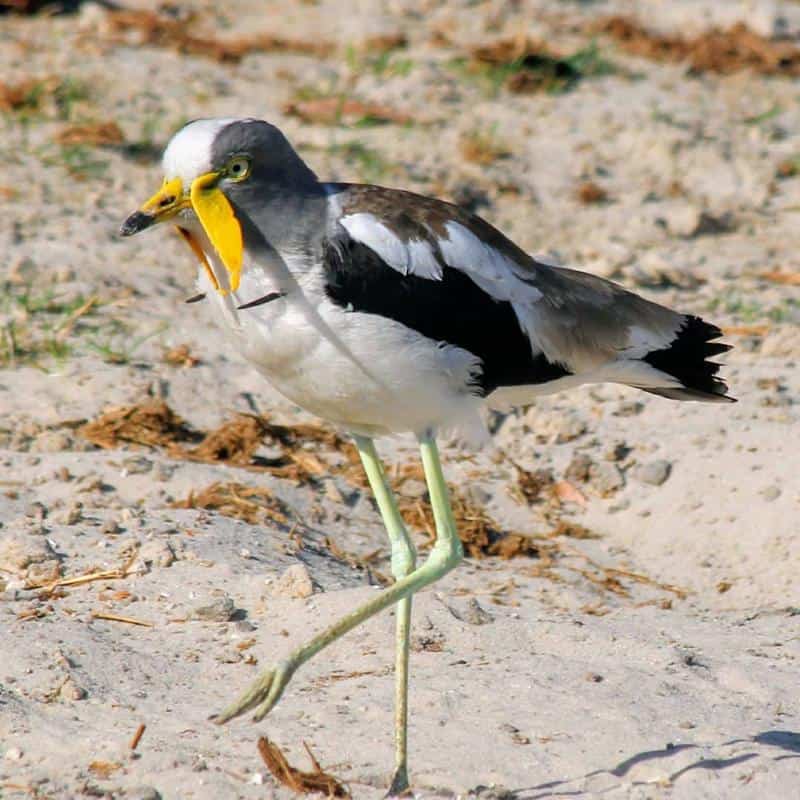 White-crowned Lapwings can be found around the vast rivers of tropical Africa, where they prefers sandbanks, but also forage in smaller streams.

The diet of White-crowned Lapwing consists of insects and small invertebrates, and it’s known to feed in small flocks outside the breeding season.

The White-crowned Lapwing’s nest is a scrape in the ground, made in open sand, where it lies 2-3 eggs, and it defends it fiercely and with a lot of noise. Otherwise, they are known to be pretty silent outside the breeding season.

Fun Fact: Although it is only between 28 and 32 cm long and weighs 161 to 214 grams, White-crowned Lapwings defends their nest and younglings even against a hippopotamus! 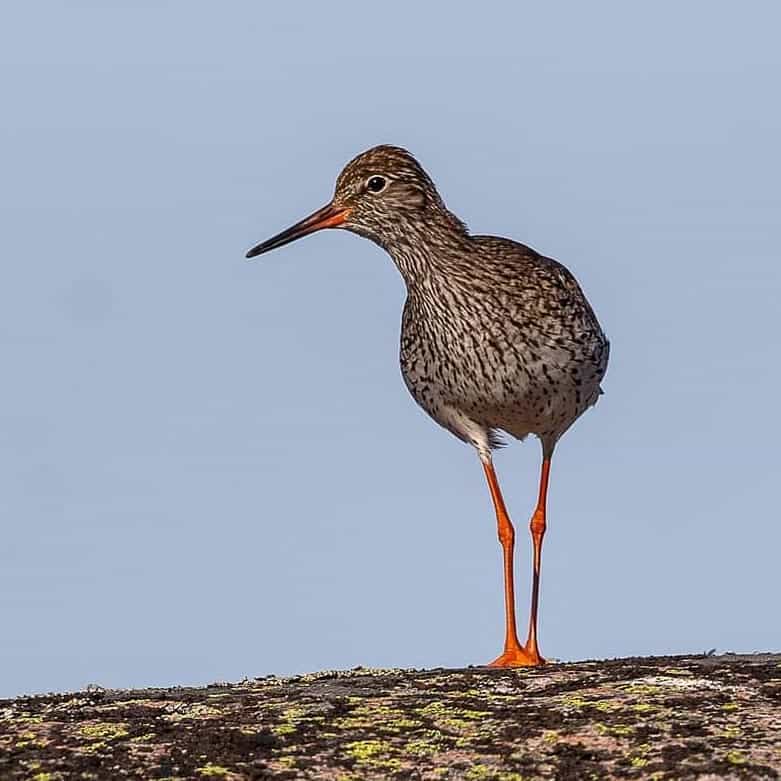 Common Redshank (Tringa totanus) is a marbled brown wader with long orange-reddish legs and a red beak with a black tip.

The preferred territories of Common Redshank are fresh and coastal wetlands from temperate Eurasia, but being a migratory bird, in wintertime it can be found on the Mediterranean shores, on the Atlantic coast of Europe, and in South Asia.

Common Redshanks feed on invertebrates (insects, small crustaceans, mollusks, worms), after which they probe with their long beaks, deep in the mud.

At the beginning of the mating season, Common Redshank builds fake nests, and chooses just one of them within which to lay up to 4 eggs.

Common Redshank males and females are loyal to the territory, they build the new nest within 50 meters from the last nest, and are faithful to one another.

Fun Fact: The female Common Redshank can lay the eggs in more than one nest, mainly because of disturbances and because it gets confused by so many nests! 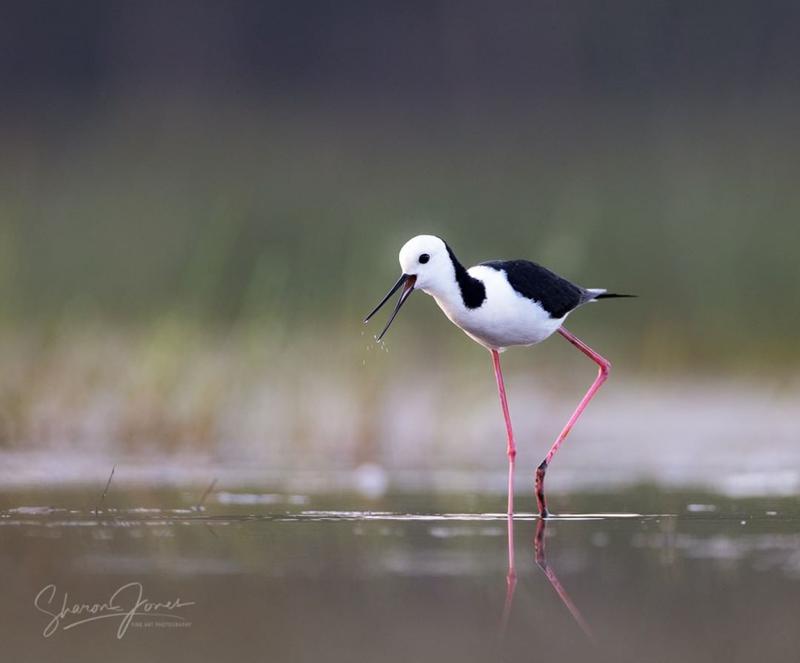 Pied Stilt, also called white-headed stilt (Himantopus leucocephalus), is a shorebird about 36 cm tall, with shiny greenish-black on the back of the neck, the head, and the upper sides of the wings, and with long pink legs.

Being a waterbird, breeding populations of Pied Stilts can be found near waters in vast areas in Sumatra, Java, Sulawesi, New Zeeland, Papua New Guinea.

Pied Stilts are also known to be a vagrant to Japan and Christmas Island.

This waterbird feeds principally on mollusks and aquatic insects, after which it probes with its beak in the sediments of shallow waters.

The Pied Stilt is a friendly bird. Sometimes, in New Zealand, it forms mixed flocks with Black Stilts.

Pied Stilts are seemingly attracted to the vicinity where red duckweed flourishes and will nest in areas of sand or alluviums in estuaries, dry riverbeds, on flat shores, or grassy fields near the sea.

A superficial but well-camouflaged scrape in the ground is the nest in which Pied Stilts lay around 4 eggs.

Despite the nest’s camouflage, adult Pied Stilt risk exposing the nests because they fly in circles above them, making loud distress noises.

Luckily, the younglings are provided with excellent camouflage and the ability to “freeze” when they are startled.

Fun Fact: A Pied Stilt parent bird can fake a leg injury to lure intruders away from the nest and chicks. 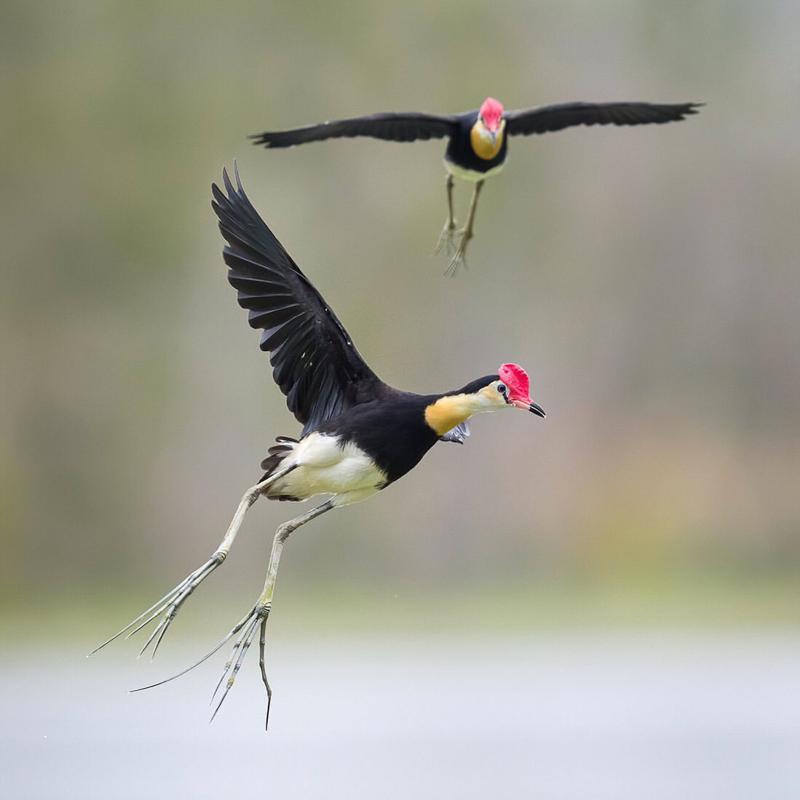 Comb-crested Jacana is unique because of its enormously large feet (on already long legs), which allows it to walk on lily pads.

The plumage is also spectacular, with a black crown and back of the neck, a red wattle of flesh over its forehead and forecrown, white face, throat, and belly, and a very wide black stripe on the lower chest.

Comb-crested Jacana lives in vast freshwater wetlands, swamps, and lakes, waters with abundant floating vegetation, such as water-lilies, which form a “floor” on which the bird can walk.

Comb-crested Jacana feeds on insects and seeds it finds on the floating vegetation.

The mating behavior of Comb-crested Jacana involves the male building a thin nest on the floating vegetation in which the female lays four eggs.

Being a polyandrous species, the male is the one that incubates and takes care of the younglings for a short period before they can fly.

Fun Fact: Because of its ability to walk on the water’s surface, Comb-crested Jacana is also known as Jesus bird. 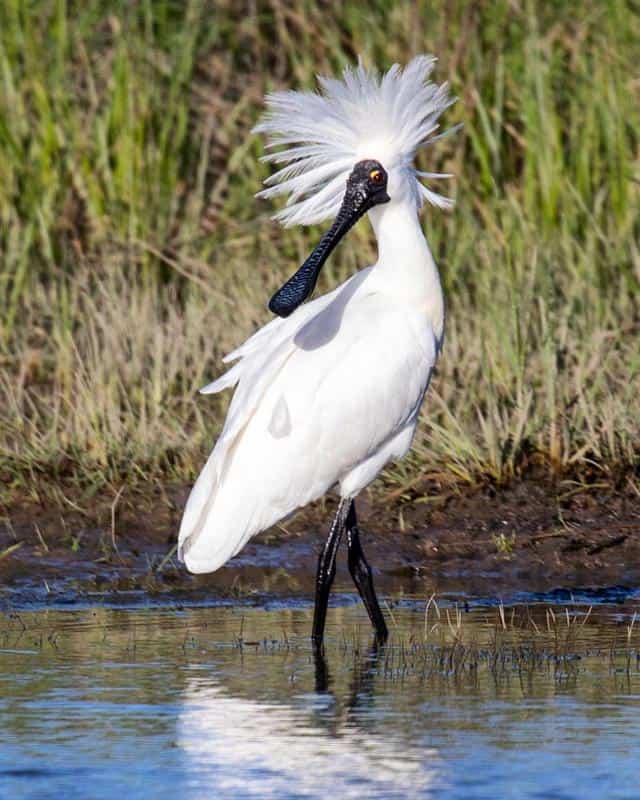 This majestic wonder has been seen in mudflats, marshes of fresh saltwater, and wetlands of Australia, New Zealand, Indonesia, Papua New Guinea, and the Solomon Islands.

Royal Spoonbill is a carnivorous bird and swipes through the water with its unusual beak, catching little animals from the mud (fish, shellfish, crabs, shrimps, snails, amphibians).

It has been observed to examine aquatic plants to catch prey living on the plant above the water (such as spiders).

The Royal Spoonbill becomes a true spectacle in the breeding season, growing white feathers from the back of their heads and colored spots appearing on the beak/face.

The female Royal Spoonbill lays two or three eggs in a tree on a nest of open sticks.

Fun Fact: Royal Spoonbills are so sensitive to disturbance that in Australia, entire populations are known to have abandoned their eggs after just small disturbances. 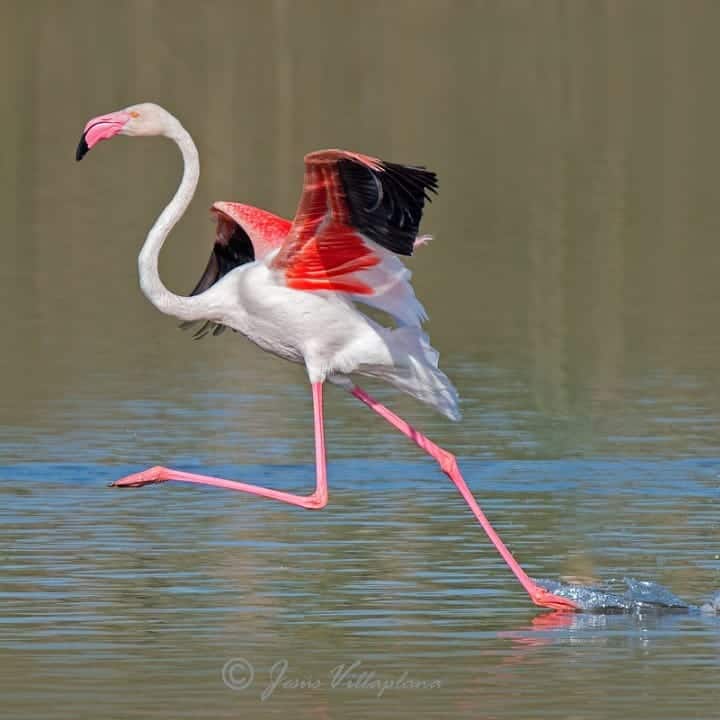 The Greater Flamingo lives in tidal flats and shallow coastal lagoons in a few regions in Africa, southern Asia, the Middle East, and southern Europe.

Their nourishment consists of microscopic organisms, algae, seeds, small shrimps, and mollusks filtered when the bird sucks water through its beak after stirring the silt with its feet.

Greater Flamingos feed head-down and don’t need to raise their heads to swallow food, probably due to the mobility of the upper jaw, which is not fixed to the skull.

The breeding season of flamingos is not related to specific calendar dates, but it depends on the rainfall levels.

For the Greater Flamingo to start breeding, a large quantity of rain is required to provide them with the required food supply.

When that condition is fulfilled, the monogamous pairs of Greater Flamingo build a volcano-like nest on a mud mound, where the female lays one chalky-colored egg.

Fun Fact: The pink colorations of Greater Flamingo come from carotenoids found in the bird’s uropygial gland and organisms living in its feeding grounds.

Also Read: Can Flamingos Fly: How Far And How High? 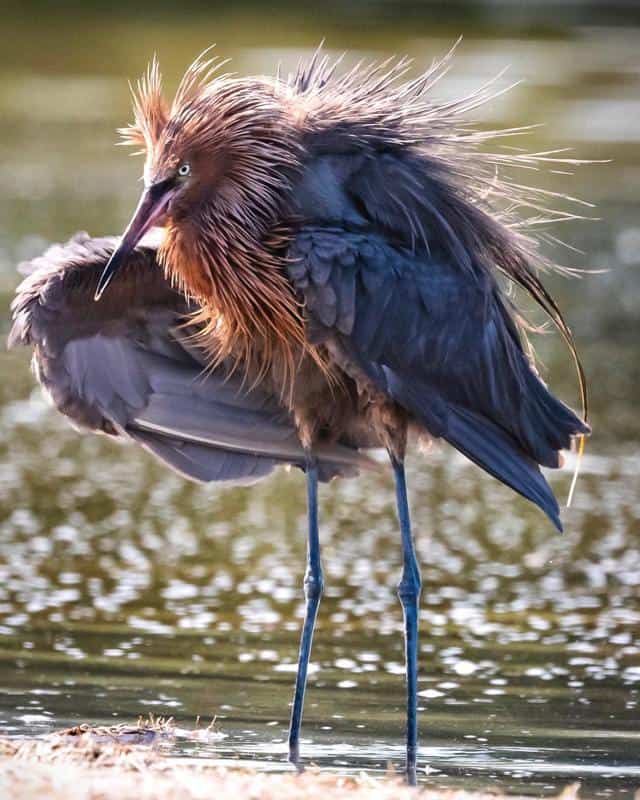 Reddish Egret (Egretta rufescenes) is a heron of medium size, with long bluish-black legs, a long neck, and a long pinkish beak that ends with a black tip.

The plumage, however, is a bit unusual because, while there are no differences between the sexes of Reddish Egret species, there are two distinctive color morphs: one dark morph, with a blue marble body, reddish head and neck, and saggy feathers; and one light morph with entirely white plumage.

Reddish Egret lives in salty and brackish wetlands of the coast of Texas, southern Florida, some regions of Louisiana, and rarely along the Gulf Coast of Mexico, Baja California, or West Indies.

The feeding behavior of the Reddish Egret is quite interesting because the bird hunts in shallow waters where it stalks its prey visually.

Way more active than other egrets and herons, the Reddish Egret runs when hunting and uses its wings shadow to decrease the shine of the water so it can catch fish more easily.

The Reddish Egret breeds in tropical swamps on coastal islands, where it nests in colonies with other herons.

In the noisy mating ritual, Reddish Egrets shake their heads to greet each other, raise their necks, backs, and crest feathers, clack the beak, and then chase each other and fly in circles.

Reddish Egret lays 3-6 eggs on platforms of twigs in trees or bushes. 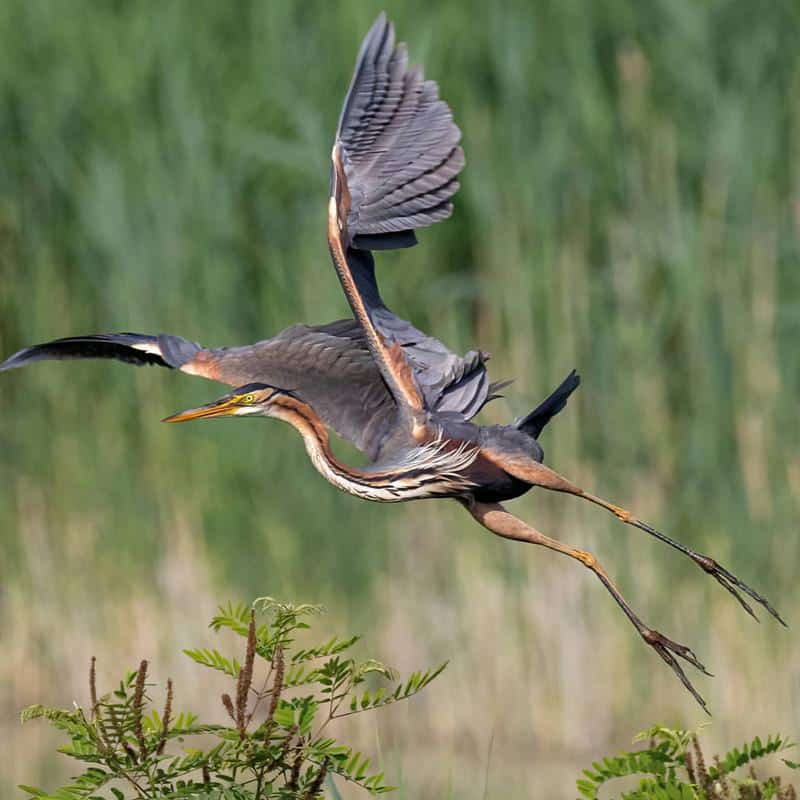 Purple Heron (Ardea purpurea) is a large wading bird with dark reddish-brown plumage, dark grey back, with a black stripe down the back of the neck, which ends in a thin dangling crest. It has a strong beak and long legs.

The Purple Heron is found in the dense vegetation of marshes, lagoons, and lakes of Europe, Asia, and Africa, where it also breeds.

The low bushes close to large lakes or vast wetlands are the preferred breeding spot for a Purple Heron, where it builds a solid nest, pulling together dry twigs, dead reeds, leaves, and any other materials it can find.

The female Purple Heron lays 4-5 eggs at intervals of three days, and both parents share the incubation.

Fun Fact: When parents come with food, the younglings drag them down their beaks to take the food directly from their beaks, or adults regurgitate directly into the nest. 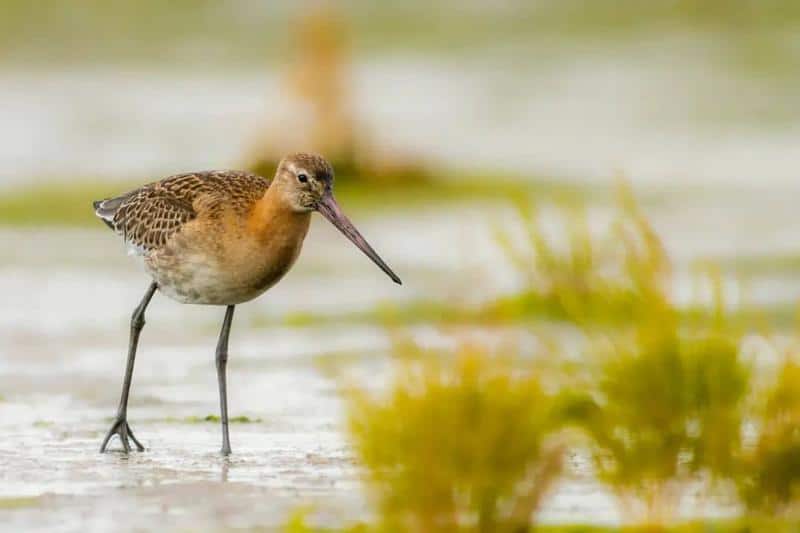 Black-Tailed Godwit (Limosa limosa) is a large shorebird with an orange head, neck, and chest during breeding, drab grey-brown during winter, and a distinguishing black and white wing stripe.

The bird has a black tail, long neck, long dark-grey legs, and a long beak that gets yellowish or orange-pink with a dark base during breeding (the base is pink in winter).

The Black-tailed Godwit prefers inland wetlands, such as river valley fens, floods, and swamps at the edge of large lakes, humid steppes, and marshes.

When it comes to feeding method and menu, the Black-tailed Godwit submerges its head completely, probing frenetically, up to 36 times per minute, eating invertebrates and, occasionally, fish eggs, frog roe, and amphibian larvae.

Single Black-tailed Godwit males defend their temporary mating territory, and show off in flight to attract a mate.

Black-tailed Godwit is mainly monogamous and, despite spending winter separately, partners re-pair within around three days of arrival.

The nest is made a short distnace from the wooing territory, in low vegetation, and it’s not more than a shallow scrape in the ground.

The Black-tailed female lays 3-6 eggs, and both parents incubate them for 22 to 24 days.

Fun fact: When Black-tailed Godwit couples reunite at the beginning of the mating season, if one partner doesn’t show up on time, their spouse will “divorce” them and find another mate. 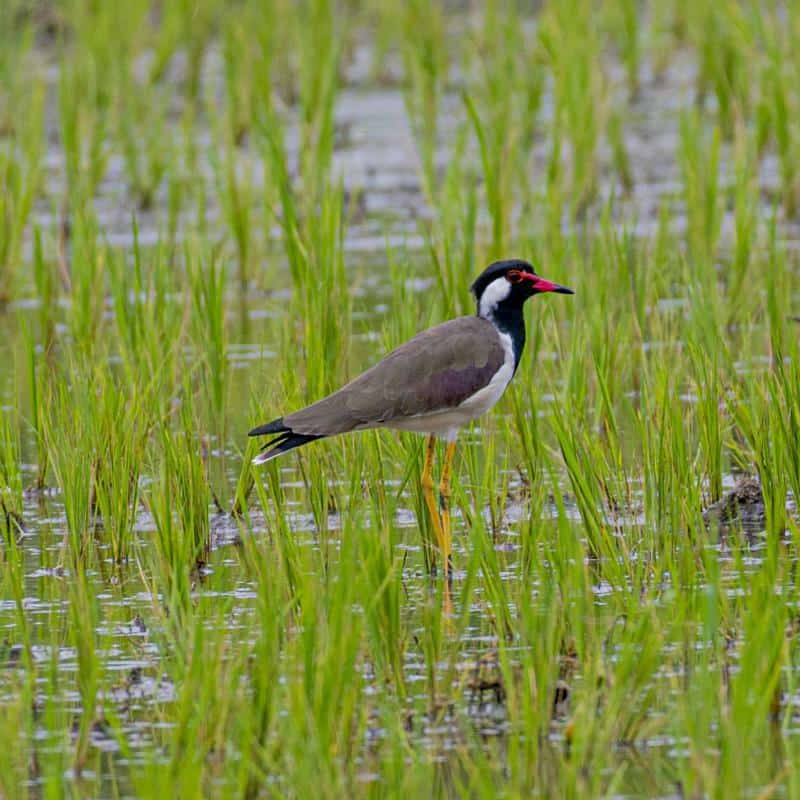 Red-wattled Lapwing (Vanellus indicus) is a large wader with a bright brown, purple-greenish shine on wings and back, a black head, and a black bib on each side of the neck.

In terms of their diet, Red-wattled Lapwings prefer insects, snails, and other invertebrates, disturbing soft soil with their strong yellow legs to find prey.

The breeding season lasts from March to August, and the wooing ritual involves the male Red-wattled Lapwing swelling its plumage, pointing its beak up, and then mingling around the female.

The female Red-wattled Lapwing lays 3-4 black dotted eggs in a scrape or shallow dent on the ground, decorated with pebbles, and goat or rabbit droppings!

Both males and females incubate the eggs, but it has been observed that males take over the incubation during the hot hours of noon.

Fun Fact: Red-wattled Lapwing soaks their belly feathers to store water for their younglings to drink or chill the eggs when the temperature is too high.

7 Birds With Teeth: Have You Ever Seen Any? - Coachella Valley Preserve