When it comes to birds with impressively long tail feathers, the peacock is surely the first bird that springs to mind. However, when you delve deeper into the forests, jungles, and plains of the world you’ll find many species with fascinating plumage ranging from bright colors to surprisingly lengthy tail feathers.

Here, we’ll look at 10 examples from around the world, discover some key feathery vocabulary, and answer a range of FAQs – how did those tail feathers get so long?! And what do birds use them for? So let’s get straight to it, 10 examples of birds with long tail feathers, from diverse regions across the world… 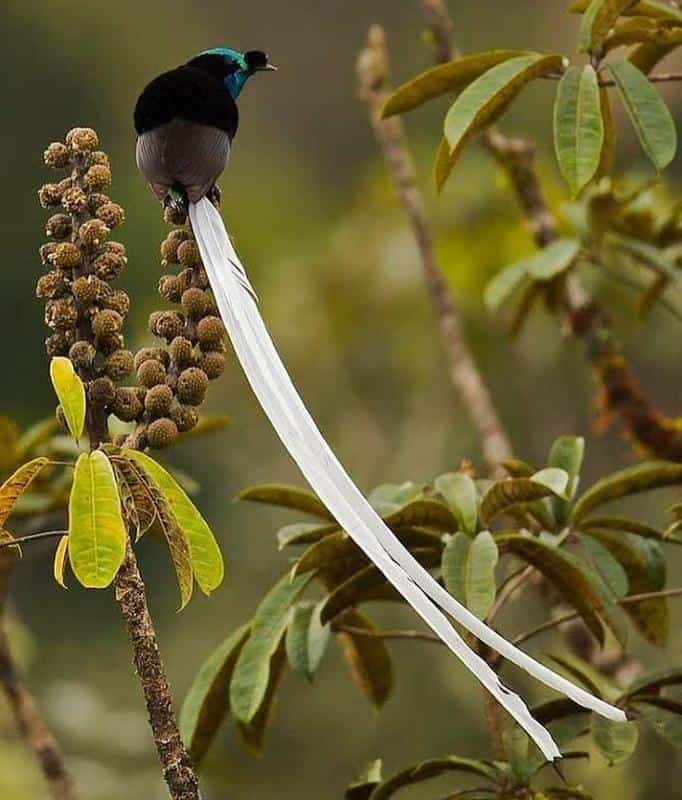 The male of this bird-of-paradise species sports fantastically long, white tail feathers which – as the name suggests – resemble beautiful ribbons sometimes reaching 1 metre long. To put this in perspective, the average length of a Ribbon-Tailed Astrapia is 32 cm, so it’s tail can be over three times the length of its body!

During the mating season, the males form leks, and hop around from branch to branch, waving their tail feathers. It is believed this is a show of agility aimed at impressing females (see photos and videos here!). Even without their striking white ribbons, their beautiful iridescent green faces topped with a pom-pom like plume would win me over any day!

Endemic to Papua New Guinea, this species is classed as Near Threatened by the IUCN (International Union for Conservation of Nature) due to hunting and habitat loss.

If you would like to find out more: https://australian.museum/about/history/exhibitions/birds-of-paradise/ribbon-tailed-astrapia/ 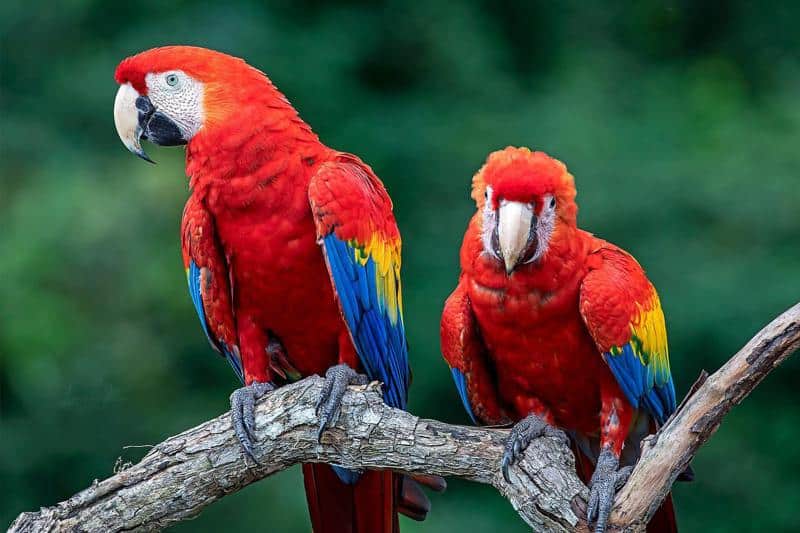 Flying on over to the subtropical rainforests of South America will take us to the Scarlet Macaw. Macaws are well-known for their bold colors and, perhaps most famously, the notoriously cheeky pet of pirate captains. These birds are incredibly social, forming large, noisy groups in the forest canopy which can be heard from kilometres away.

Scarlet macaws have the longest tail feathers of all macaw species with eye-catching blue and red shades. They practice geophagy – clay-eating! It is thought that they snack on clay to counteract the toxic effects of some fruits they eat.

Unfortunately Scarlet Macaws are heavily exploited by the pet trade and suffer from habitat loss. However, exciting new efforts are being made to protect and reintroduce this bird to its natural habitat, such as this project in Mexico.

If you would like to find out more: https://www.rainforest-alliance.org/species/macaw/ 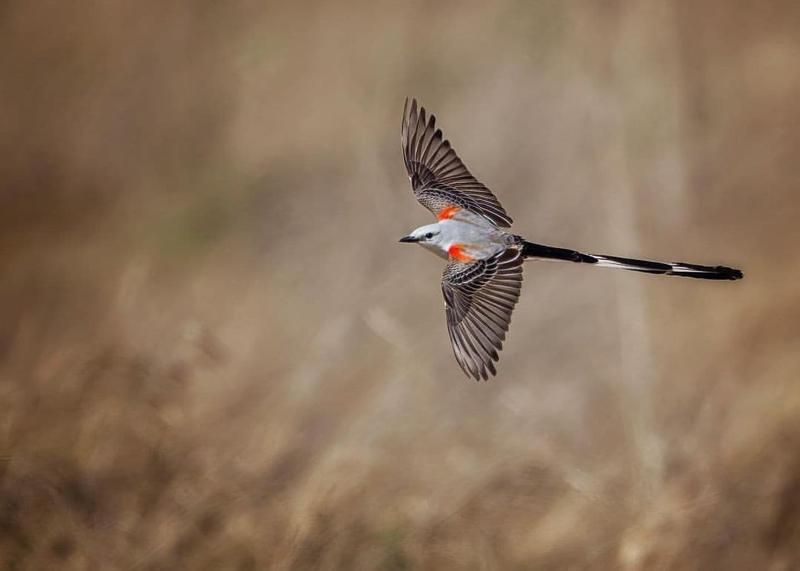 One bird which uses elegantly long tail feathers to improve its agility whilst in flight is the Scissor-tailed flycatcher. A smaller and less flashy species compared to the macaw, this bird is at home primarily on the plains of Texas, USA.

Its sleek black-and-white, forked tail feathers and bright salmon underbelly are most easily spotted when males perform the ‘sky dance’ – an elaborate, graceful courtship dance accentuated by flowing tail feathers. Here you can see photos and videos of the scissor-tailed flycatcher – the state bird of Oklahoma!

Good news: the Scissor-tailed flycatcher is considered by the IUCN to be of ‘Least Concern’ with a considerable range and large population size.

If you would like to find out more: https://www.wildlifedepartment.com/wildlife/field-guide/birds/scissor-tailed-flycatcher 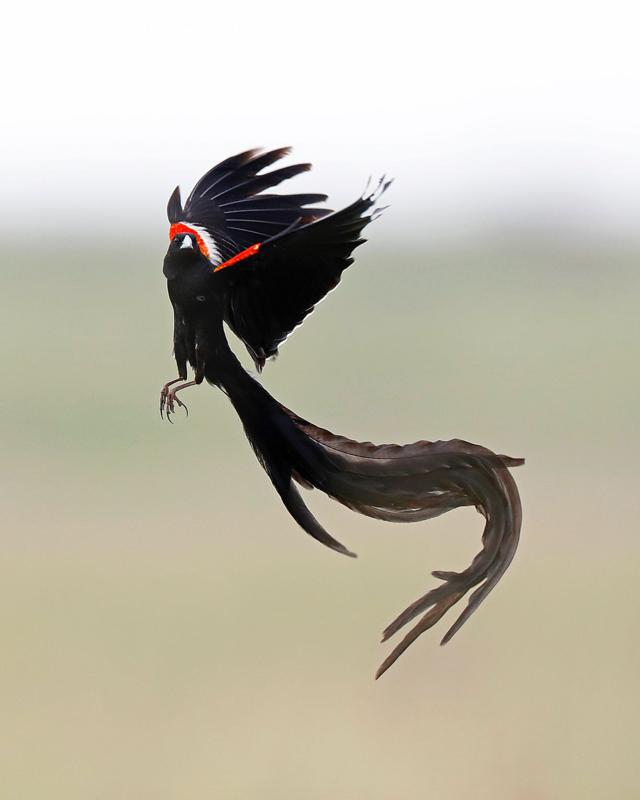 Here’s another species in which only the males exhibit astonishingly long black tails (see photos and videos here!). This bird is mostly black, giving it the name ‘widowbird’ to reflect the old custom where widows would wear black for a specified period following the death of their husbands. However, the long-tailed widowbird can possess striking flashes of red, orange and white, with a vast tail flowing out behind them, just like the train of an elaborate wedding dress.

During the breeding season, the males will form a territory and enact a slow, graceful display for any female that enters the area. Males are polygynous and may gather up to 5 females to breed with, using their impressive display and woven nest-making skills.

More good news: the long-tailed widowbird’s conservation status is Least-Concern according to the IUCN due to its significant range and stable population dynamics – brilliant!

If you would like to find out more: https://southafrica.co.za/long-tailed-widowbird.html 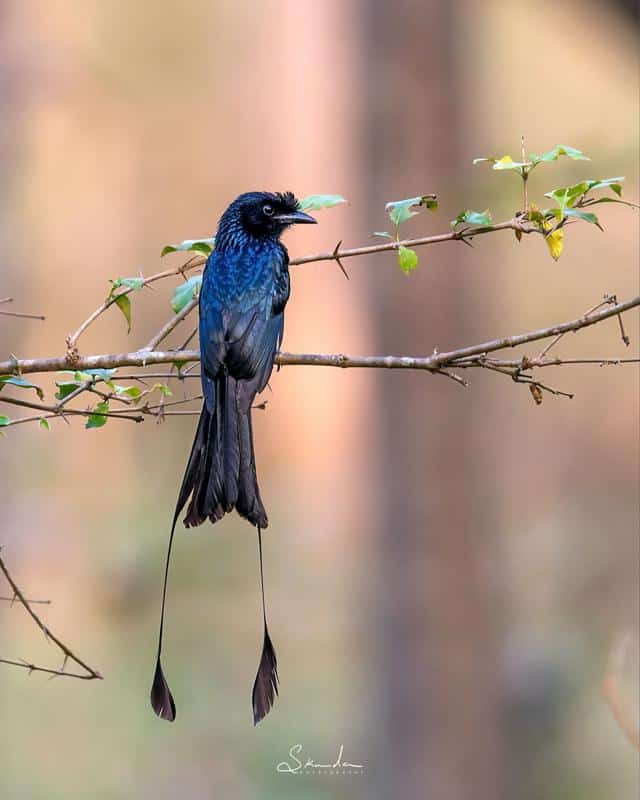 Another splendid, black, long-tailed species is the Greater Racket-Tailed Drongo. The tail of both genders strongly resembles rackets, or sticks, used in hockey – the outer tail feathers are elongated with a thin spine, ending in pendant-like tips (see photos and videos here!). This species is well-known for its talent in imitating other bird calls – this is believed to help them incorporate themselves into mixed-species flocks essentially by pretending to be other birds! Another sneaky trait they have is called food kleptoparasitism; let’s break this down into parts:

So food kleptoparasitism ultimately means these pesky Greater Racket-Tailed Drongos steal food that has been caught or gathered by other animals. Very cheeky!

If you would like to find out more: https://kidadl.com/animal-facts/greater-racket-tailed-drongo-facts 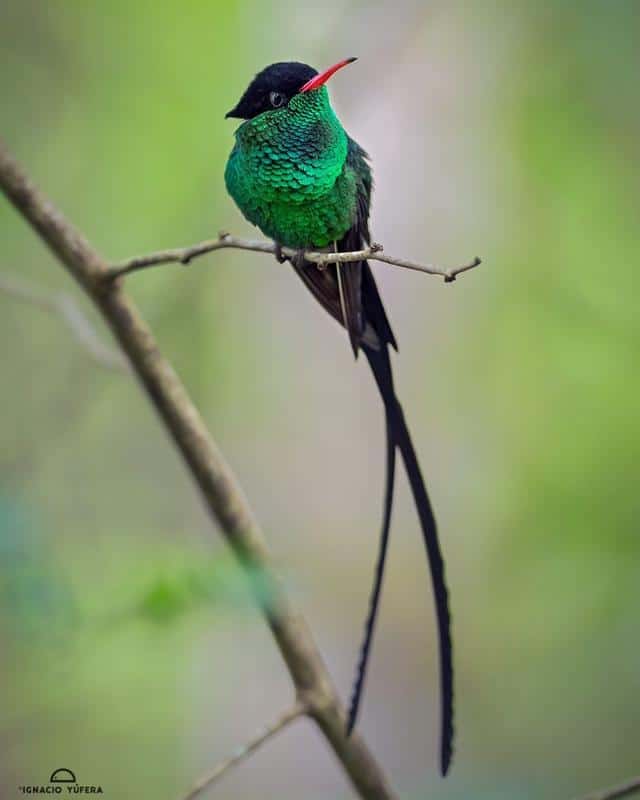 The smallest bird on our list, the Red-Billed Streamertail is a hummingbird which is endemic to Jamaica. Both genders have a stunning, scale-like, iridescent green body, and the males have long black tail feathers which are more than twice as long as their bodies. (See photos and videos here!)

Another popular species, this bird is the national bird of Jamaica. Locally, people call it ‘doctorbird’ due to the black tail streamers which remind people of old-fashioned doctors who wore black coats with long coattails. The Arawak Indians, early inhabitants of Jamaica, called the Streamertail the ‘godbird’ because they believed it represented the reincarnation of dead ancestors.

Interestingly, the tail feathers make a high-pitched whining sound when males are in flight – this is part of the display males perform to attract females. 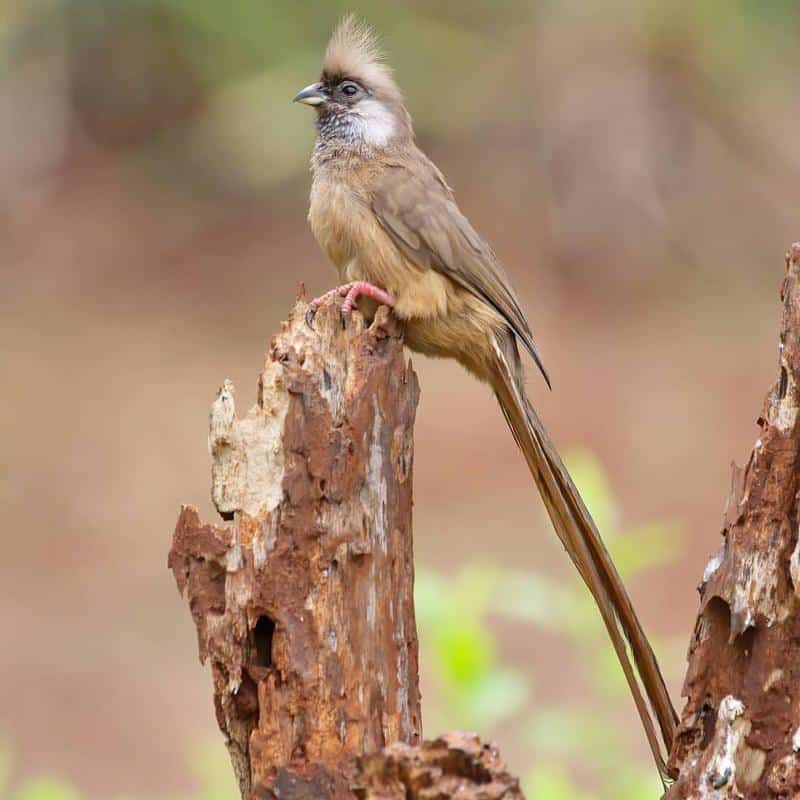 Although it is the least colourful bird on our list, the Speckled Mousebird more than makes up for it with a cute fluffy crest on its head, and long flowing tail feathers. The tail combined with the grey and brown tones of the body resemble a mouse, giving this species its namesake. They mostly feed on fruit and, like Scarlet Macaws, they also practice geophagy. (See photos and videos here!)

Often Speckled Mousebirds can be found basking in the sun to warm their body temperatures – they do this because fruit has a low calorific value and does not provide much energy. So these birds actively drop their body temperature in a process called torpor which saves energy, and reactivate themselves via sun-bathing. 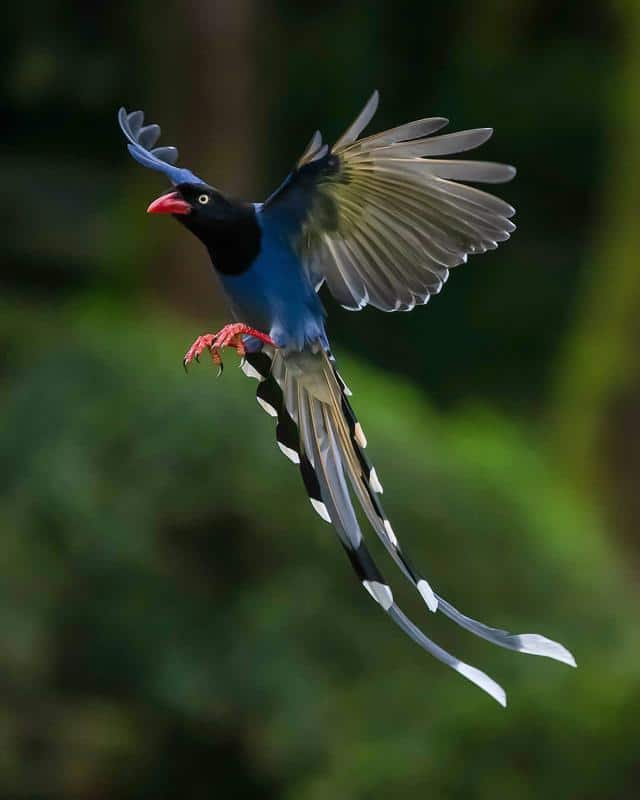 Another endemic, protected species, the Taiwan Blue Magpie is only found in Taiwan. Despite its restricted range, the protection measures are working because it is classified as Least Concern by the IUCN. This bird is mostly iridescent dark purple/blue, with a bright red bill and legs, and long dark purple/blue tail tipped with white. (See photos and videos here!)

Their behaviour is known to be very aggressive, and they will go to great measures to protect their nests from intruders – so its probably a good idea to watch from a safe distance! When flying, flocks of Taiwan Blue Magpies follow one another closely, beak-to-tail, and can appear as one continuous line silhouetted against the sky. 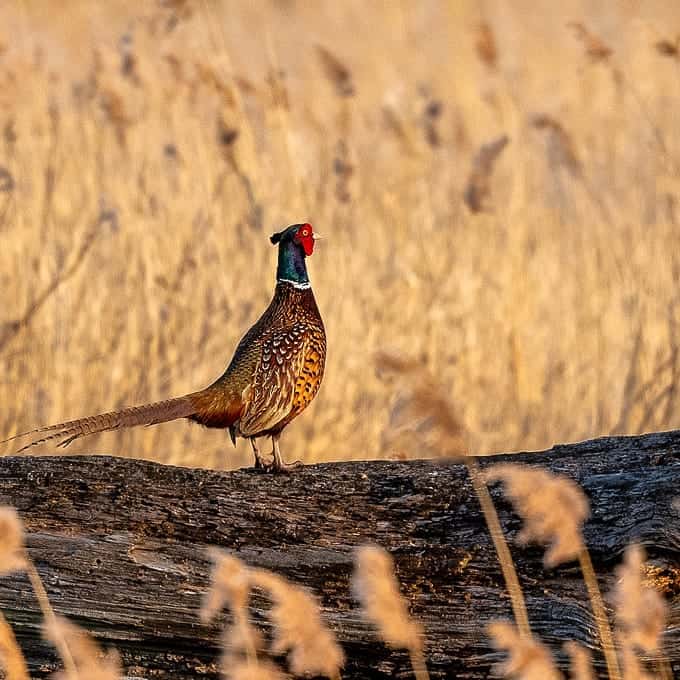 Despite its name, the Common Pheasant is far from common-looking! The males possess a striking array of patterns in tones of orange, bronze and brown, and an iridescent green head and bright read wattle. Both genders have long tails, but the male’s tail is longer with more distinctive banding patterns. In fact, the tail feathers have been commonly used by people all over the world as decorations for everything from centrepieces to headwear, including carnival costumes.

Originally from Asia, this species has been widely introduced across North America, New Zealand, and much of Europe primarily as a gamebird, for hunting and shooting. There are now many wild or feral populations in these regions, in some cases terrorising the countryside with the shockingly loud, laugh-like calls they give when disturbed! (See photos and videos here!) 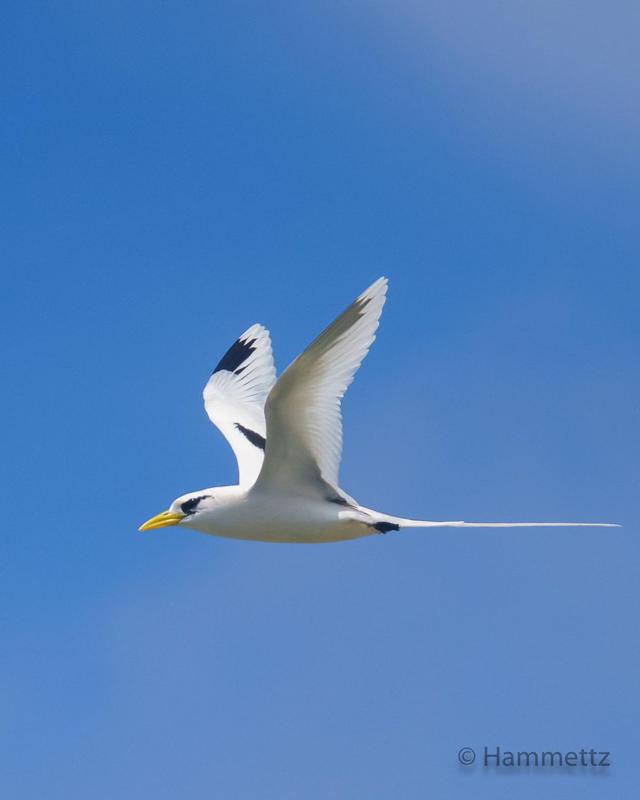 Gliding over the tropical and subtropical regions of the world, we will find the White-Tailed Tropicbird from the Southern Indian Ocean, through the Pacific and Atlantic Oceans to the Caribbean. This species is a seabird and can be found soaring over oceans and cliffsides, with two  long, white tail streamers trailing behind them. The sleek, aerodynamic shape of their dart-like bodies, and narrow wings and tail feathers allows them to glide for extensive periods.

Unusually, both genders use their tails in a complex courtship ritual which can be compared to a synchronised dance. One bird will fly above the other and gracefully bend their tail feathers to touch the tail of the bird below – quite an impressive feat whilst in flight! (See photos and videos here!)

Another species classed as ‘Least Concern’ by the IUCN – great news! If you would like to find out more: https://www.audubon.org/field-guide/bird/white-tailed-tropicbird

Now we’ve taken a closer look at some brilliant examples of birds with long tail feathers, perhaps you’re wondering why they possess such outrageously long tails? How did this come to be? And what on earth do they use them for? Let’s take a deeper dive into the whys and hows of long-tailed birds.

How and why did some bird species get such long tail feathers?

A familiar pattern in all areas of science is ongoing mystery and controversy – the long-tailed bird field is no different. While some scientists think long tail feathers have formed to help birds in flight, i.e. to improve their aerodynamic abilities, others think long tail feathers have been chosen by females throughout species’ evolution in a process called sexual selection.

However, if you imagine dragging a vast wedding dress-style train around behind you wherever you go, as in the case of a Widowbird, it’s going to slow you down! That’s where the theory of sexual selection comes in…

From a female bird point of view, you want a father who will help you to maximise your success in raising a healthy brood of chicks. So it’s pretty important that he’s in good shape.

Both theories are examples of natural selection – an essential process in the evolution of all living things we see today.

Why is it usually the males that have long tail feathers?

You may have noticed in some of the examples above – Ribbon-Tailed Astrapia, Scissor-Tailed Flycatcher, and Greater Racket-Tailed Widowbird – that the males sport the extraordinary long tail feathers. This is common in all bird species, and it’s called sexual dimorphism.

Usually this is because, in the bird world, males display to females to try and attract potential mates. Then, it is up to females to choose the best male (in their opinion!). Over time (and we’re talking an evolutionary timescale, millions of years!) this selection process has meant that male features, such as long tail feathers, have become more and more pronounced through generations of passing down the long-tailed genes.

This is a simplification, but helps to explain why we see such a weird and wonderful diversity of bird species with long tail feathers all over the world today!

What can we do to help protect threatened bird species such as the Ribbon-Tailed Astrapia?

An ongoing issue in nature conservation that affects almost all species around the world is habitat loss, and other factors such as the exploitation of species through hunting or trading. But wait, there is good news! There are things we can all do to contribute to saving and protecting endangered bird species including:

There are so many ways you can help birds, from small, easily achievable actions to bigger, more involved movements. If you’re interested in contributing to bird conservation, here’s some more ideas: https://www.conserve-energy-future.com/amazing-ways-conserve-and-protect-birds.php