When you think of mohawks, perhaps the first thought that springs to mind is punk rockers? Maybe you think of Native American tribes from whom the hairstyle is derived? You may even think of Mr T from the A team, perhaps the most famous mohawk-bearer of modern times? One thing you may not think of is birds but prepare to be amazed – there are hundreds of awesome birds sporting the mohawk look!

From flamboyant, eye-catching peaks to fluffy, endearing perms, read on to discover 10 wonderful examples of birds with mohawks…

Brief History of the Mohawk Hairstyle

The mohawk hairstyle is most recognisable as a peak of hair in the centre of the head, and shaved sections either side. In most areas around the world is has a strong association with punk music – it was widely adopted between the 1970s and 1980s by many famous punk bands. In fact, the inspiration for the eye-catching hairdo comes from the Native American tribes within the Mohawk Nation.

When it comes to a bird with a mohawk, is it accurate to call their punky hairdos a mohawk? In bird physiology, what appears to be a mohawk is more correctly known as a crest. Let’s get into the nitty gritty of crest anatomy…

A bird’s crest is constructed from specialised feathers called semiplume feathers. These are characteristically soft and flexible, or plumulaceous if you want to get technical. Many birds possess a crest, some of them for their whole life cycle and some only during the breeding season. When a crest is large and pronounced, it becomes an easy feature to identify and often forms part of a bird’s common name, such as the Grey Crowned Crane. 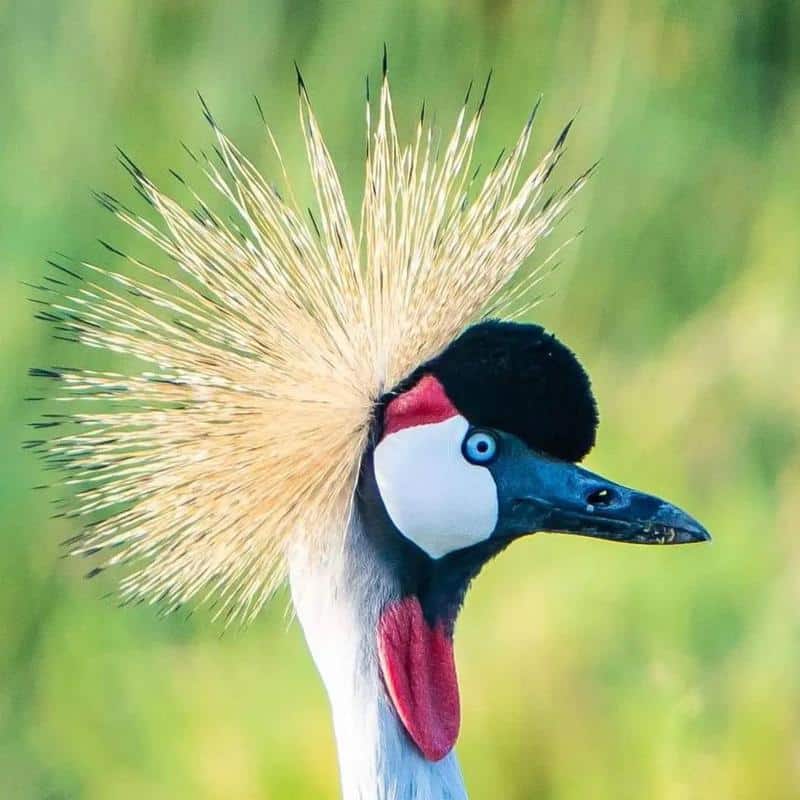 What are Crests For?

Most often a bird’s crest is used for mating purposes. It is usually displayed in the hopes of attracting a mate. In some species the crest can be raised or lowered at will, and forms an important part of courtship displays. Some species like Waxwings will raise their crests to communicate with potential mates during courtship. 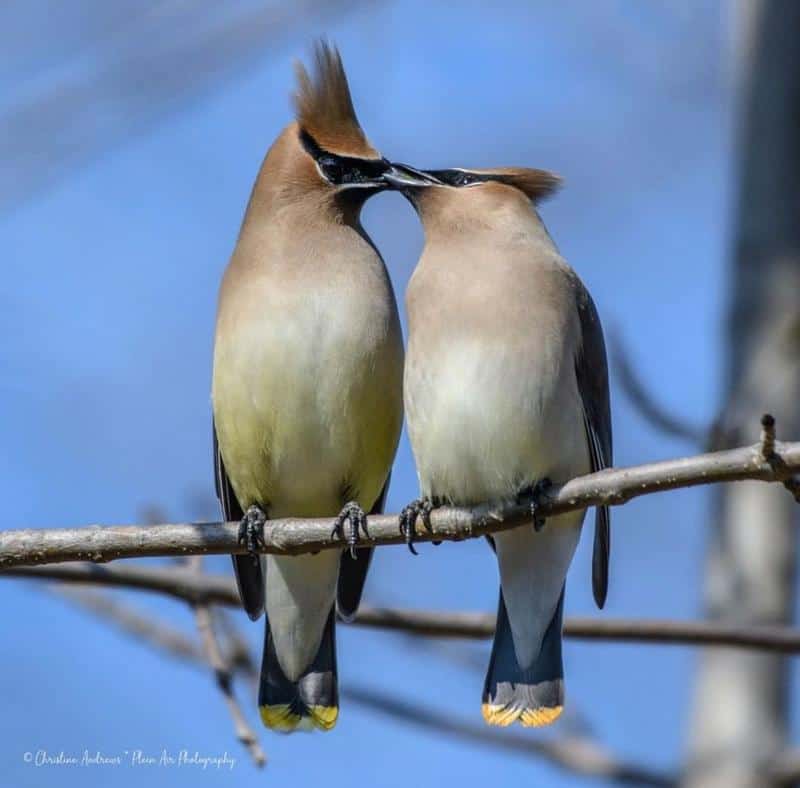 Another useful attribute of a controllable crest is to show aggression, or to threaten another individual. Birds like Cockatoos and Cockatiels often sport impressive crests which can be raised suddenly to frighten other birds by making themselves look bigger. Crest displaying can help to decide social hierarchies within the same flock by communicating either dominance or submission.

Due to their eye-catching colours or striking form, crests have often been popular in domesticated species throughout human history. These features have been added through genetic mutation, through selective breeding, or through a combination of these factors. Some fantastic examples can be seen in different breeds of domestic chickens including Houdan chickens with their crazy crown of black and white feathers. 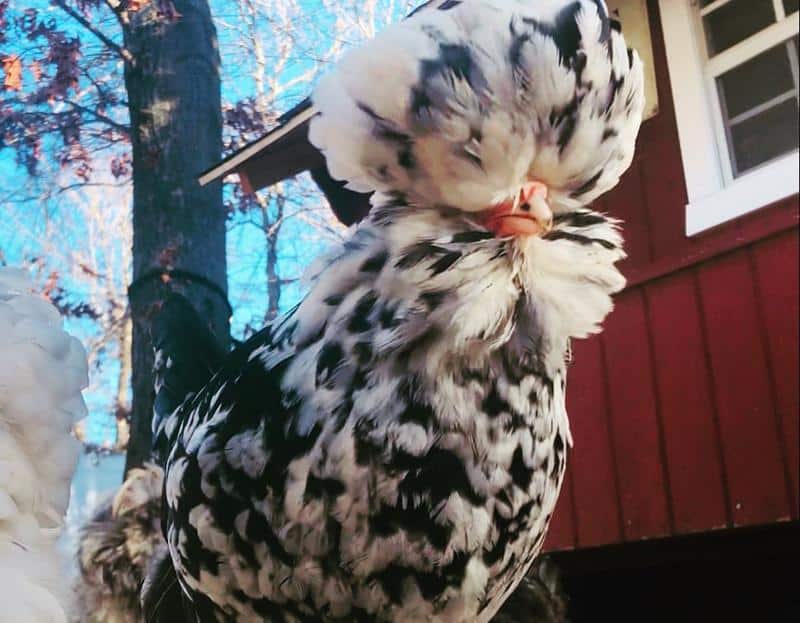 But for now, let’s focus on a few incredible examples of birds with fancy mohawks, one for each colour of the rainbow and a few further shades beyond that…

Birds with Mohawks Every Colour of the Rainbow: 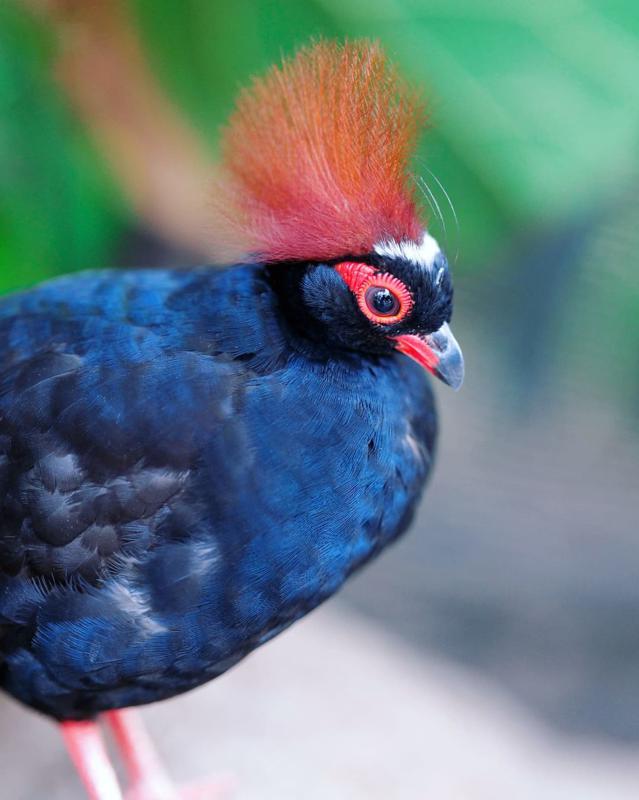 The ravishing red plume of a Crested partridge can only be seen in the male of this species. Contrasting with the sooty black plumage of a male, the fluffy scarlet crest is incredibly striking but surprisingly difficult to see in the wild. This species is usually found silently foraging on the forest floor of lowland rainforests from south Burma through Thailand and Malaysia to Borneo.

Females are more often olive-green with chestnut brown wings and lack the red crest. Mating pairs are usually monogamous and often forage together, sticking close-by through a series of low whistles.

Unfortunately Crested Partridges are classed as Near-Threatened by the IUCN (International Union for Conservation of Nature) due to habitat loss via deforestation, and pressure from hunting. 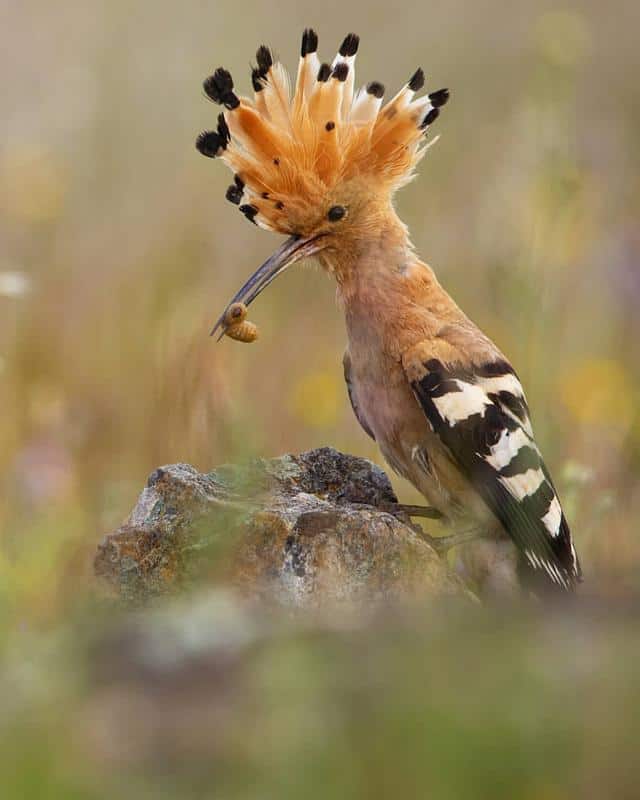 An extremely distinctive species with black-and-white barred wings, and an attractive peachy-orange head, neck and crest, the Eurasian Hoopoe is hard to miss. The black-tipped crest is most often ‘closed’ but will ‘open’ after it has landed and during courtship or defensive displays.

This species is widespread through much of Europe, Asia, and some parts of Africa. Its broad range is due to its relatively simple habitat requirements – open ground upon which to forage, and vertical faces which possess holes or cavities such as rocky cliffs.

Eurasian Hoopoes usually forage on the ground, probing soil with their narrow beaks for insects, seeds, berries, and sometimes small reptiles and amphibians.

Some more information can be found here. 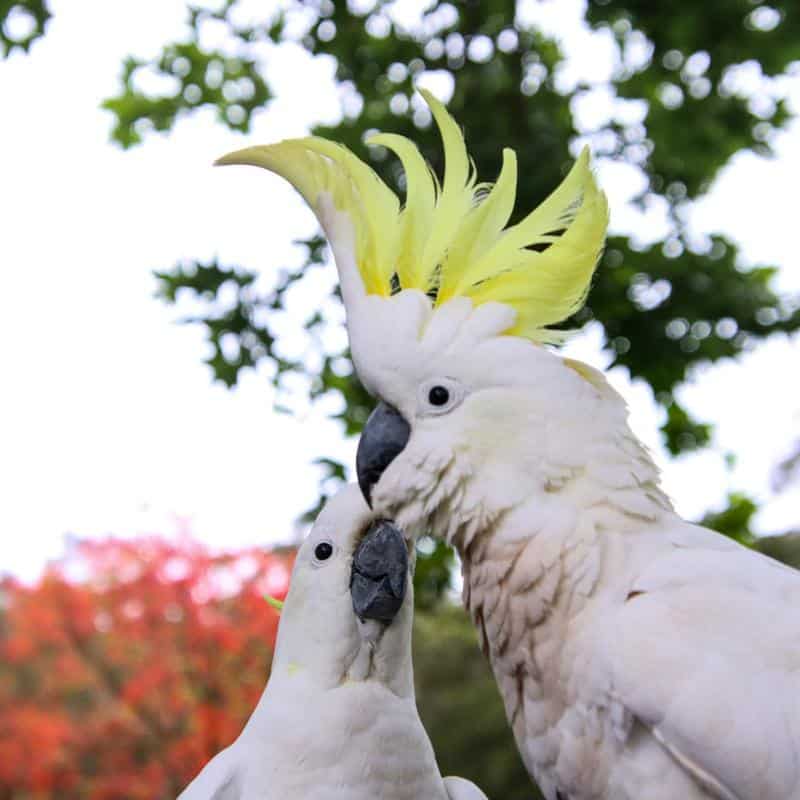 Renowned as a raucous, loud-mouthed bird, the Sulphur-crested Cockatoo can be found in the wild mainly in Australia, New Zealand and Papua New Guinea. The crest of both males and females consists of several, long, drop-like yellow quills. Due to both the noise and distinctive pale-yellow coloration of both the crests and underwings, flocks of Sulphur-crested Cockatoos are impossible to miss!

Large flocks of this species often gather to forage together, with some sentinels posted up trees, looking out for signs of danger. One interesting behaviour they exhibit is twig-snapping and leaf-stripping which is believed to help them hone their beak and prevent overgrowth. 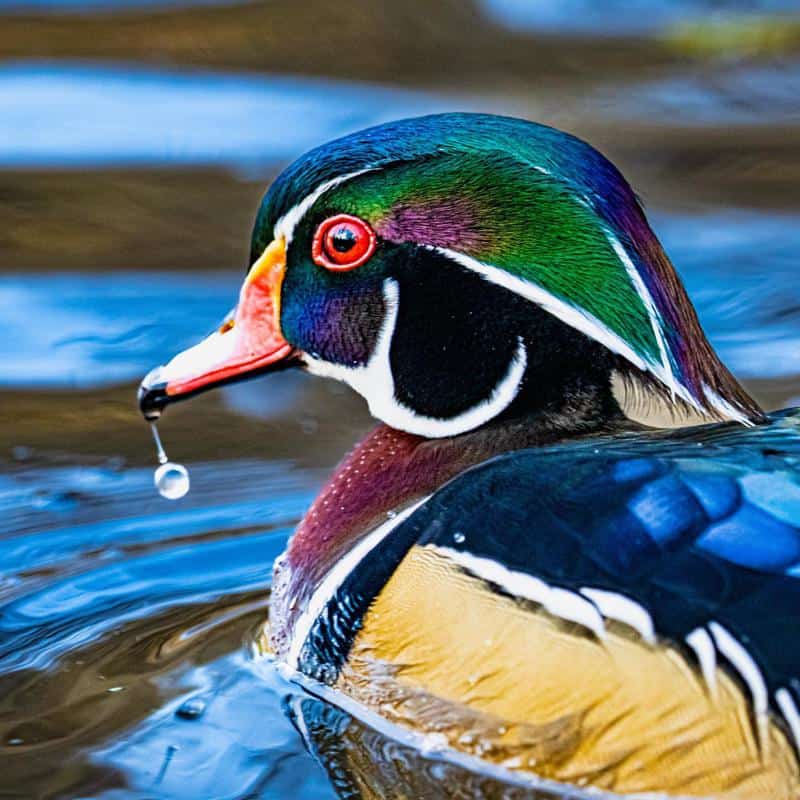 The male Wood Duck’s crest is surely reminiscent of a slicked-back, dyed green mohawk. The crest feathers are a beautiful iridescent green, sometimes mixed with dark yellow and purple. This species’ punky look is further exaggerated by the bright red eye and smooth black and white outlines. Females lack the bright coloration of males, but have a more elegant, grey, fluffy crest.

Found in wooded swamps in North America and some areas of Europe, this species is one of very few ducks which are able to perch in trees thanks to their tough claws. Once they are ready only one day after hatching, the ducklings will make a perilous jump from the nest in a tree cavity, down into the water below – risky! They have been known to survive plunges of up to 50 feet (around 15 metres!). 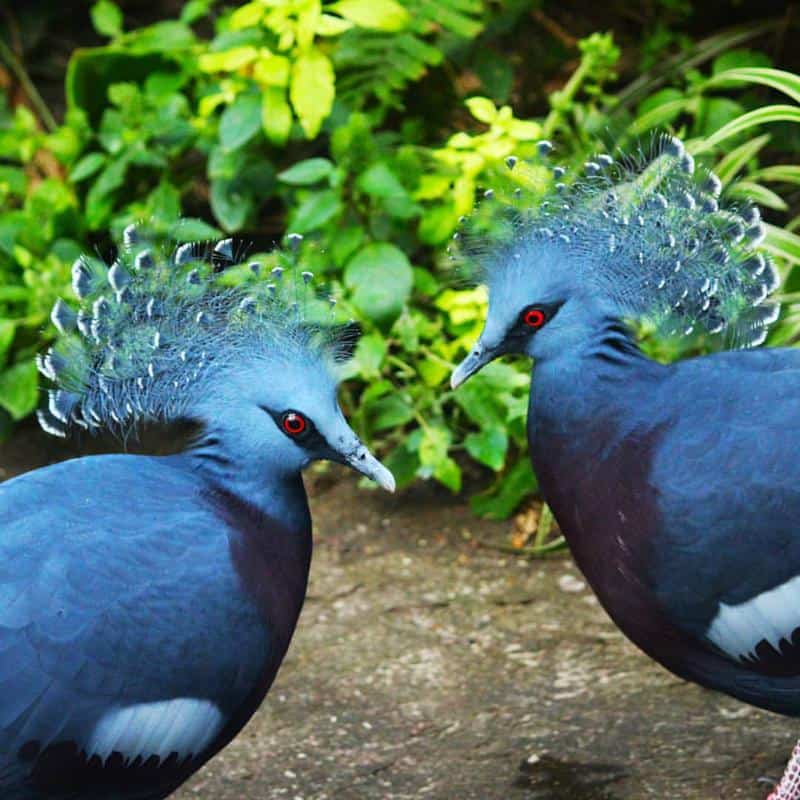 A list of birds with mohawks would not be complete without featuring the Victoria-crowned Pigeon. Surely one of the most stunning pigeon species in the world, with its delicate, powdery-blue crest feathers protruding at all angles from its head. Both males and females bear this fantastic crest, but only males will perform a courtship display for females. The impressive display includes bowing, tail-fanning and wing-lifting, accompanied by booming sounds and a spot of twig collecting to finish up.

Victoria-crowned pigeons are the largest pigeon species, reaching an average weight of 7.7 pounds (3.5 kilograms) and a length of 31 inches or 78 centimetres. They mostly forage in fallen fruit in swampy forests. This species is endemic to Papua New Guinea and classed an Near-Threatened by the IUCN. 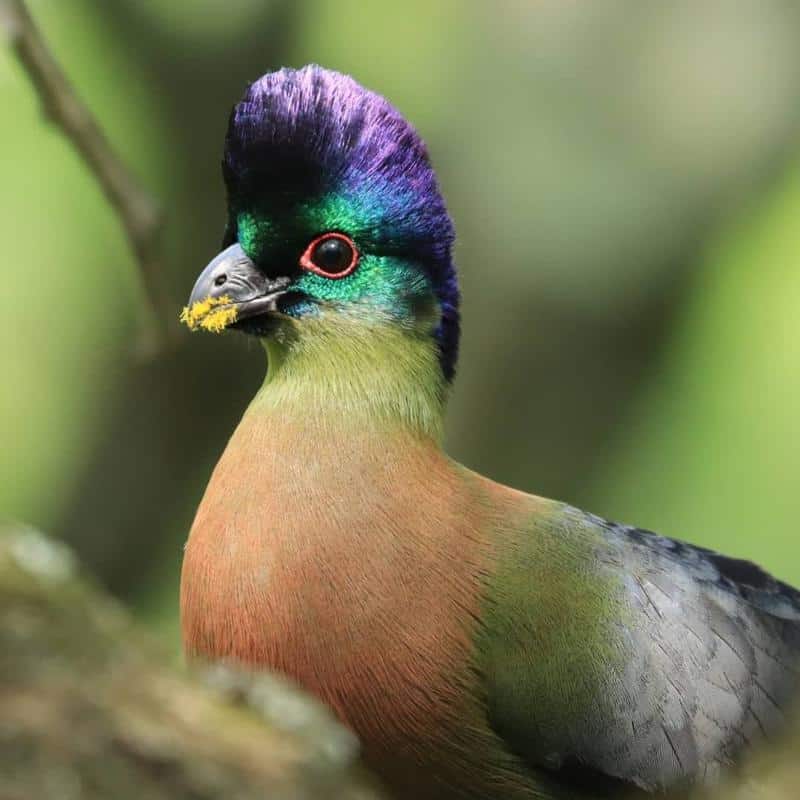 The regal, iridescent indigo feathers of a Purple-crested Turaco give this bird its status as the national bird of the Kingdom of Swaziland. Its plumage is a gaudy mix of yellow-orange on the neck and chest, electric blue and ruby red wings, striking red eyes and an iridescent green face mask.

In its habitat of riverine woodland and savannah, it is an important frugivore (fruit-eater), performing critical seed dispersal which is vital for ecosystem functioning. The Purple-crested Turaco can be found in south east Africa. Its crest is used in mating displays as part of a head posturing routine. 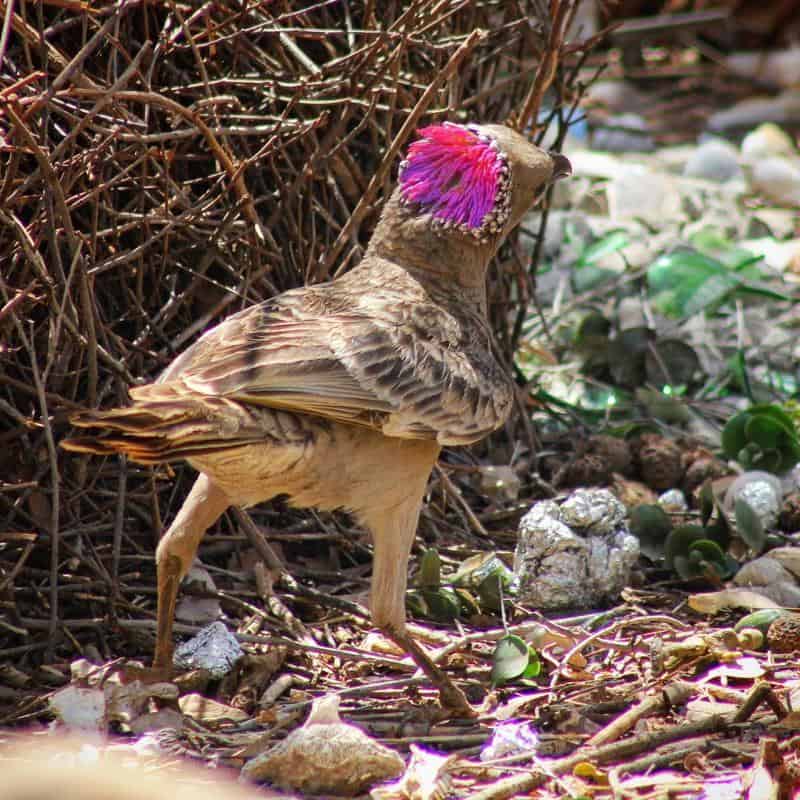 Our next feathery friend is the Great Bowerbird, part of the Bowerbird family famed for their unique courtship behaviour – the males collect brightly coloured objects and twigs to decorate a large bower (den) in the hopes of attracting a female! The bower of a Great Bowerbird will include items that are red, white and green from both nature and the man-made world – bottle caps and glass are just a couple of the unusual objects that have been found in bowers!

The males of this species are the ones with a bright, pink-violet crest which they display to the females in the early morning hours. These early-risers utilise the morning light to show off their plumage at its best.

Great Bowerbirds can be found in northern Australia, usually in dry woodland but sometimes in mangroves and monsoon forest. 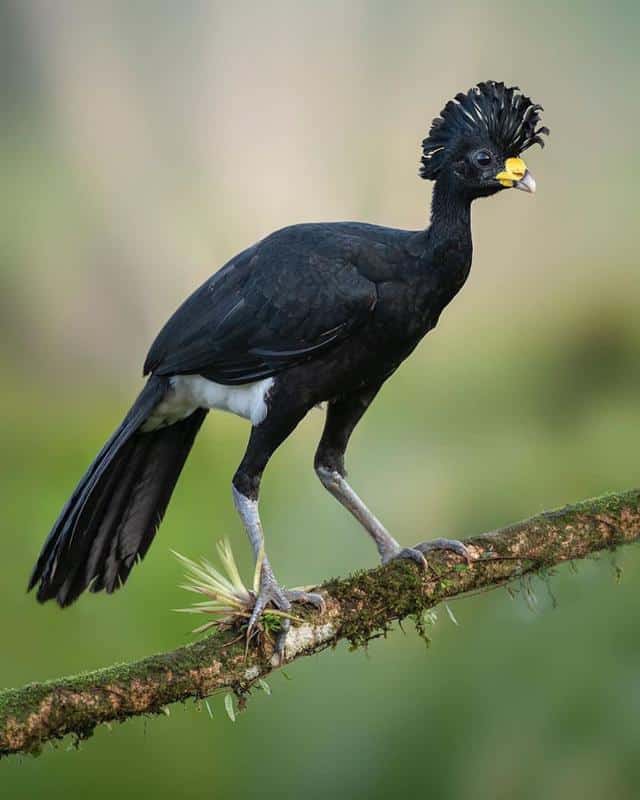 The Great Curassow, or Tropical Turkey, is a large bird in which the males are inky black with a fancy, curly crest while the females vary from black to brown and sport a more modest crest. This species can be found in Central America and is usually restricted to protected areas due to deforestation of tropical rainforest – their primary habitat – and hunting by humans. Consequently, the IUCN lists it as a vulnerable species.

Family groups tend to stick together, with the male leading and calling to his group in low whistles. Sometimes he will sit in the treetops and emit a booming call. Males use this same booming technique during courtship displays, fluffing out his feathers and tossing his head around to exhibit his lovely plume. 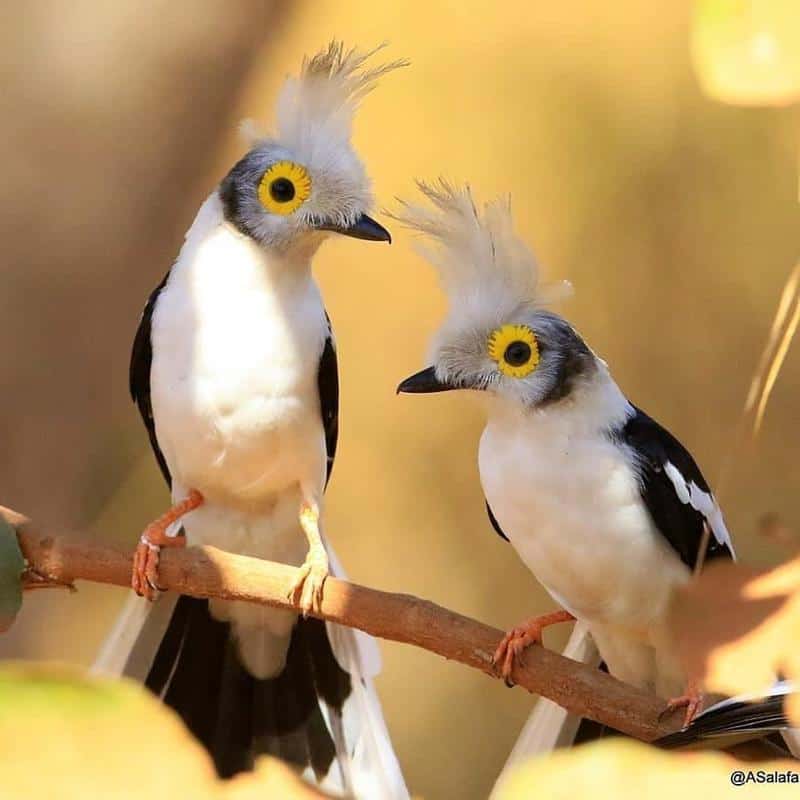 Across Sub-Saharan Africa, White Helmetshrikes can often be found in large groups, perching in trees where they are easy to spot due to their pure white belly and distinctive white wing bars. Both males and females possess a fluffy, often untidy crest. Sometimes it curls forward onto the beak, conjuring the image of a stylish combover. The crest combined with a sunflower-like wattle around the eye make this a particularly memorable species.

White Helmetshrikes can be found in dry areas of woodland and savannah. The flocks have a well-organised social order which involves cooperative nesting duties dictated by a dominance hierarchy, and a strict foraging path which the flock will follow every day during the breeding season.

The nest-building process involves the collection of spider webs which are applied to the outside of bark strips which have been woven into a cup shape. This effectively camouflages the nest and means it can be re-used for multiple breeding seasons.

Some subspecies of the White Helmetshrike have a much smaller crest, or lack the crest completely. It is the subspecies Prionops plumatus plumetus which boasts the longest crest.

If you are interested, you can find out more here. 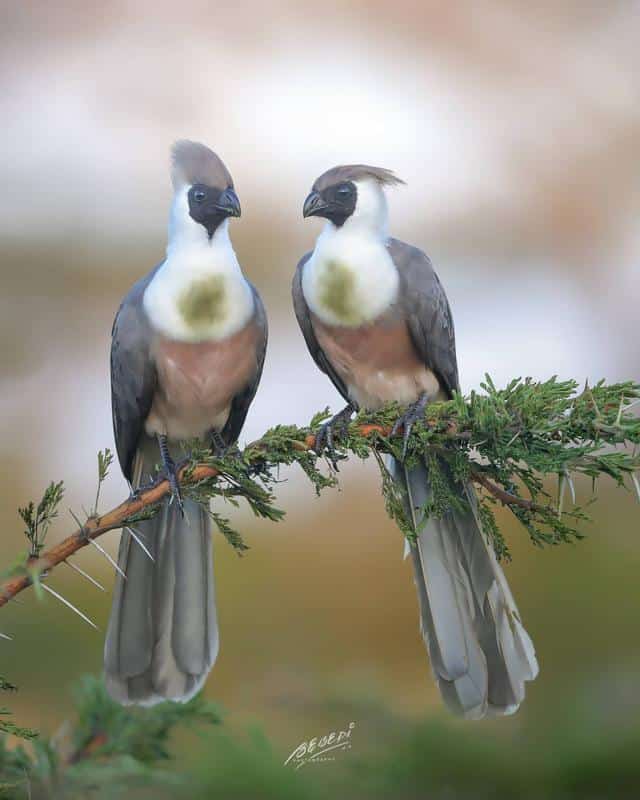 The intriguingly-named Bare-faced Go-away-bird is another type of Turaco, like the Purple-crested Turaco further up our list today. This species can be found in east Africa, from Kenya down to Malawi in mixed habitats from savannah to woodland to residential areas.

Called ‘bare-faced’ due to its black face which is unusual among the Turaco group, the coloration on this bird ranges from white to grey, with a uniformly light grey, fluffy crest found on both genders. The second part of its common name ‘go-away-bird’ is due to the call of a close relative which reportedly sounds as if it is telling you to go away with repeated “g’wa-ay, g’wa-ay” sounds. This species gives a call which sounds more like “khweow” and can be very vocal.

Small Black Birds With White Belly: A Close-up To The Birds’ World

7 Bird Species With Blue Eggs: The Particularities Of Blue Eggs