The list of birds with orange beaks is vast – it is a common attribute in the bird world. So it’s understandable if you’ve come here looking to identify a species you have seen with an orange beak (also called bill). This stunning bill color comes from carotenoids, pigments from foods the birds consume.

But why are some birds bills orange? What is the reason for this? We’ll explore the orange coloration and the evolutionary purpose behind it. We will also provide a list of 14 of the most fascinating birds with orange beaks.

Why Do Birds Have Orange Beaks?

Bird species that consume food containing a high concentration of carotenoids (such as berries) are more likely to have orange beaks. The pigments are absorbed into and stored within the body’s tissues. As well as contributing to bill color, carotenoids can help boost a bird’s immune system. Therefore, bright beaks and healthy birds can be synonymous.

This is important during bird breeding season. Males with brighter beaks may be chosen over those with duller beaks. Bright orange beaks are an indication of good fitness, and therefore good fecundity. Alternatively, when competing males get into fights or territorial disputes during the breeding season, the color and condition of their beaks can indicate their dominance. 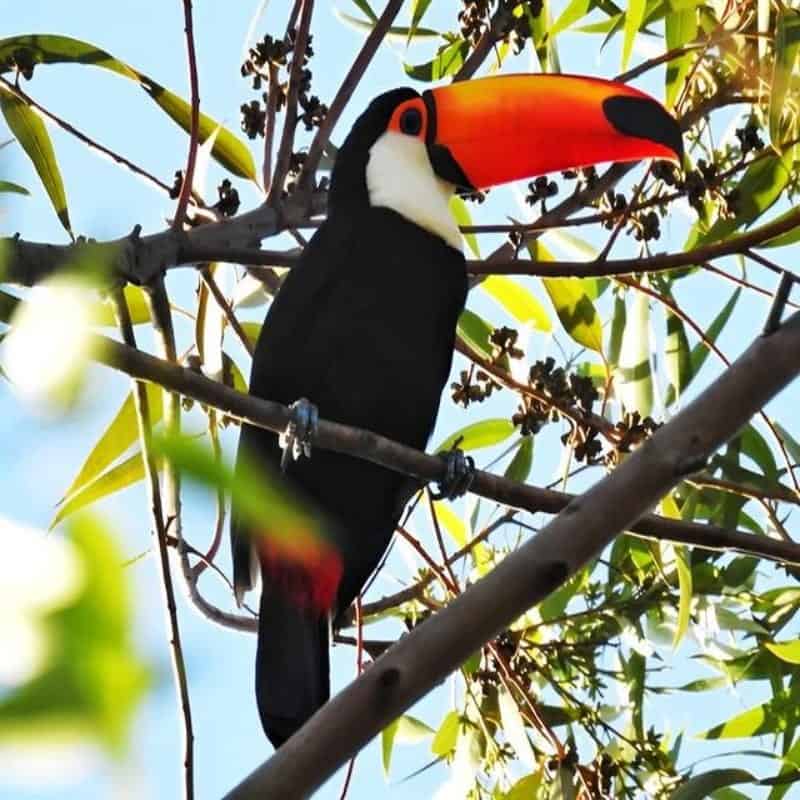 The Toco, or giant, Toucan is a large species of toucan. They can be found in some areas of South America including Brazil, Paraguay and Boliva. Although it has a stunning white throat patch below the beak, the rest of its plumage is jet black.

This species preferred habitat is open areas of woodland and savannah. Its impressive beak can grow to 7 inches long and is mostly composed of keratin and is mostly hollow which makes it light-weight despite its abnormal size.

Toco Toucan mostly feed on fruit for which their beak is perfectly adapted. But they will also consume insects, small birds and reptiles, and frogs. 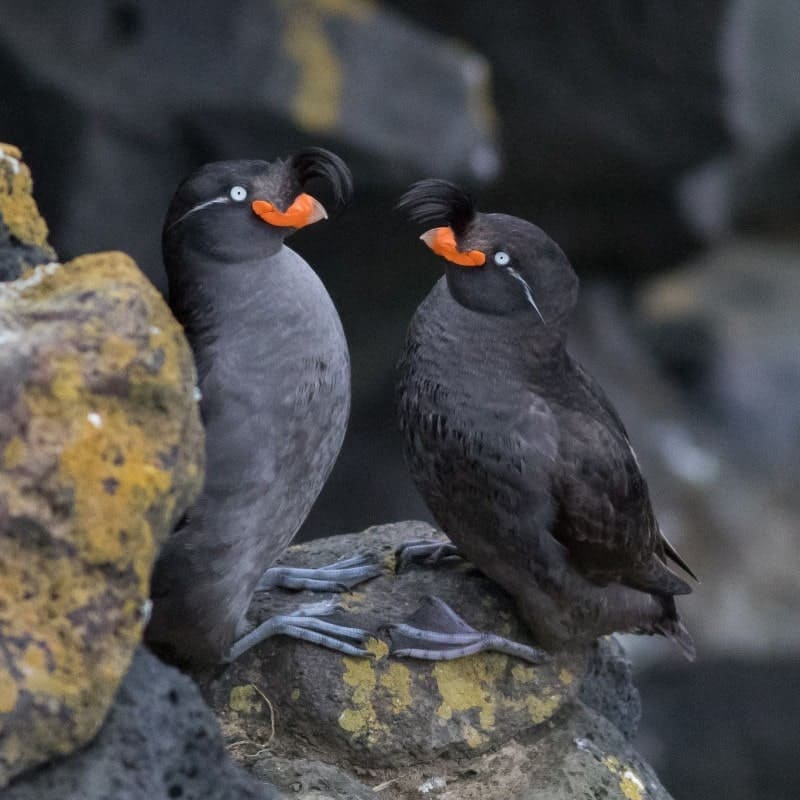 A stocky, black-brown species with fantasically pale eyes, the Crested auklet is unusually small for a seabird. It has a “romantic”, floppy black plume above its beak, and a pale whisker of feathers behind its eye which gives it the alternative name Whiskered auklet.

Their striking orange bill is notable for the uptilted or upturned gape which makes the species look as if it is smiling!

This species is social, breeding and nesting in vast colonies on rocky shores, mostly around islands. It forages for small fish and aquatic invertebrates in the open sea. Crested auklets can be found around Alaskan and eastern Japanese shores. 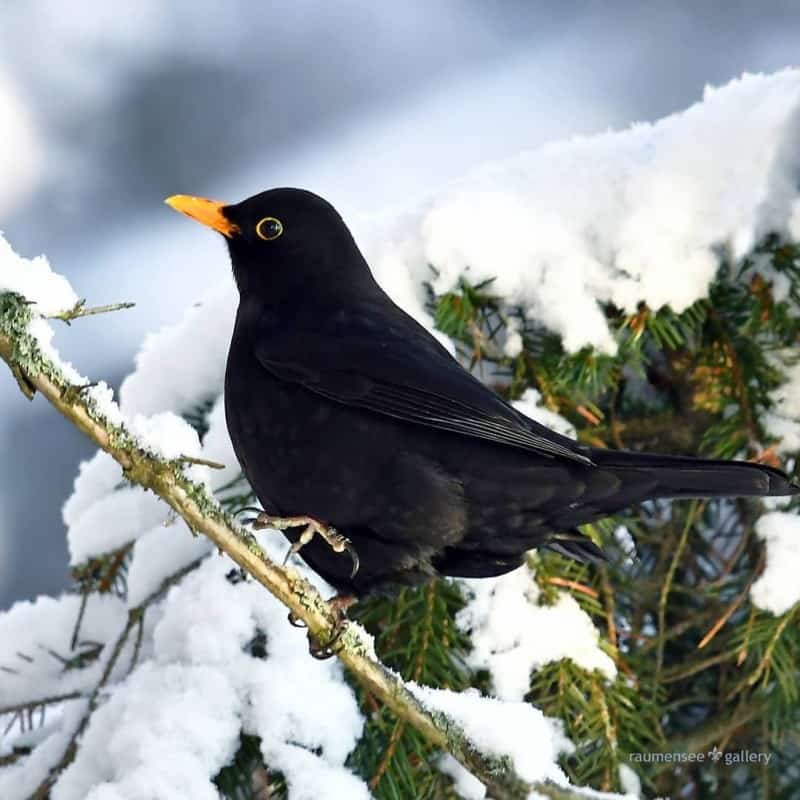 Although the common blackbird often has a bright yellow beak rather than orange, it depends on the diet of the local population. A common and friendly species familiar in gardens throughout Europe, some parts of Asia, and North Africa. It can now be found in parts of Australasia where it was introduced.

Only the males of this species have yellow-orange bills and dark black plumage, while females and juveniles have brown plumage and a duller beak. Blackbirds favous wooded areas, as well as urban areas like backyards and parks.

This species feeds on the ground and expresses a beautiful song which is well-loved and distinctive to people who have grown up surrounded by it. 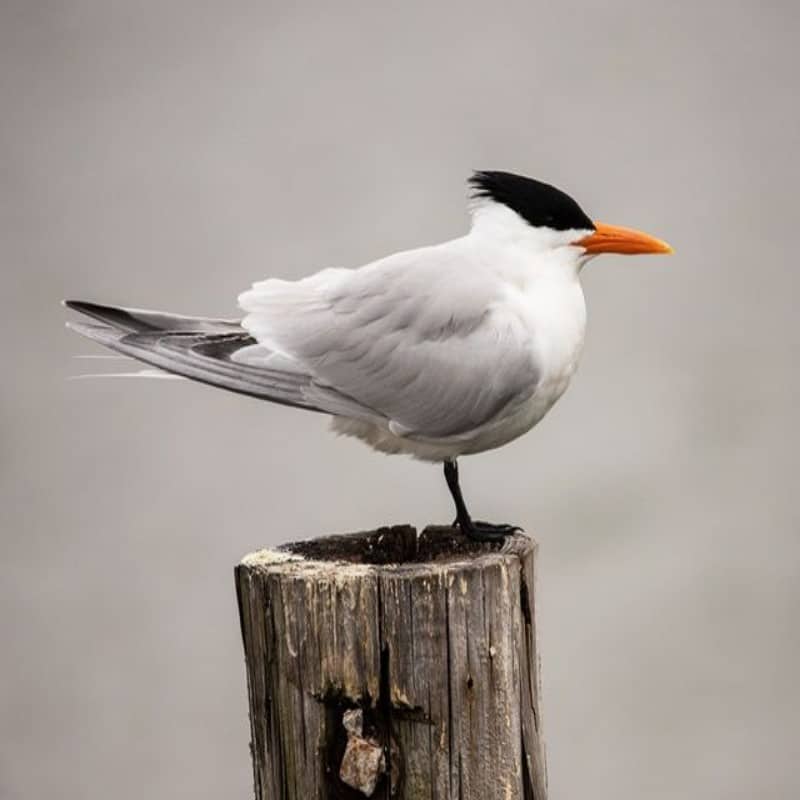 This is a fairly large tern species which is only found in coastal areas of southern North America, Central America and the northern and south eastern part of South America. Its bill is long, thin and sharply pointed, and its white coloration gives it a seagull-like look.

Royal terns feed on fish, scouting for them by gliding high above either the open ocean or within bays and inlets. This is a social species which can often be found on beaches in mixed flocks with other bird species. 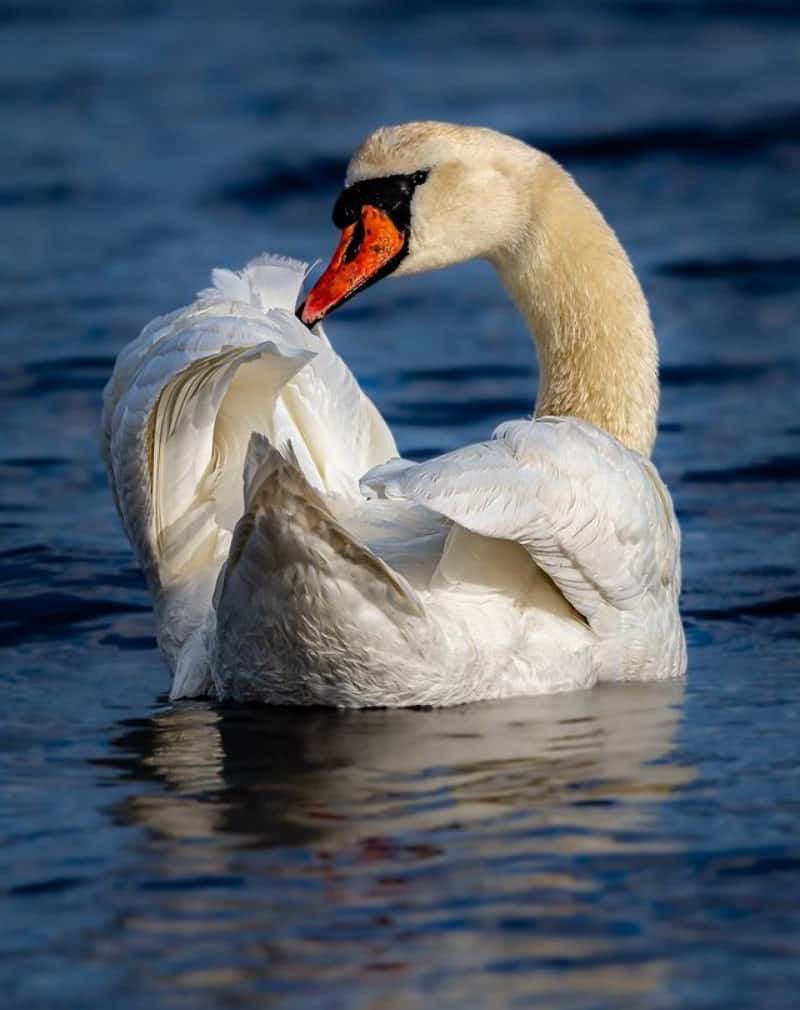 The Mute swan is common throughout Europe and part of Asia, and some parts of North America. It is a very large bird with a characteristically long neck and pure white plumage. Adult birds have a black “knob” located at the top of the beak.

Mute swans are found on and around many types of waterbodies, both freshwater and seawater. They have a reputation for being very territorial and aggressive towards other nearby waterfowl (and sometimes people, if threatened). In some areas they are considered as invasive species. 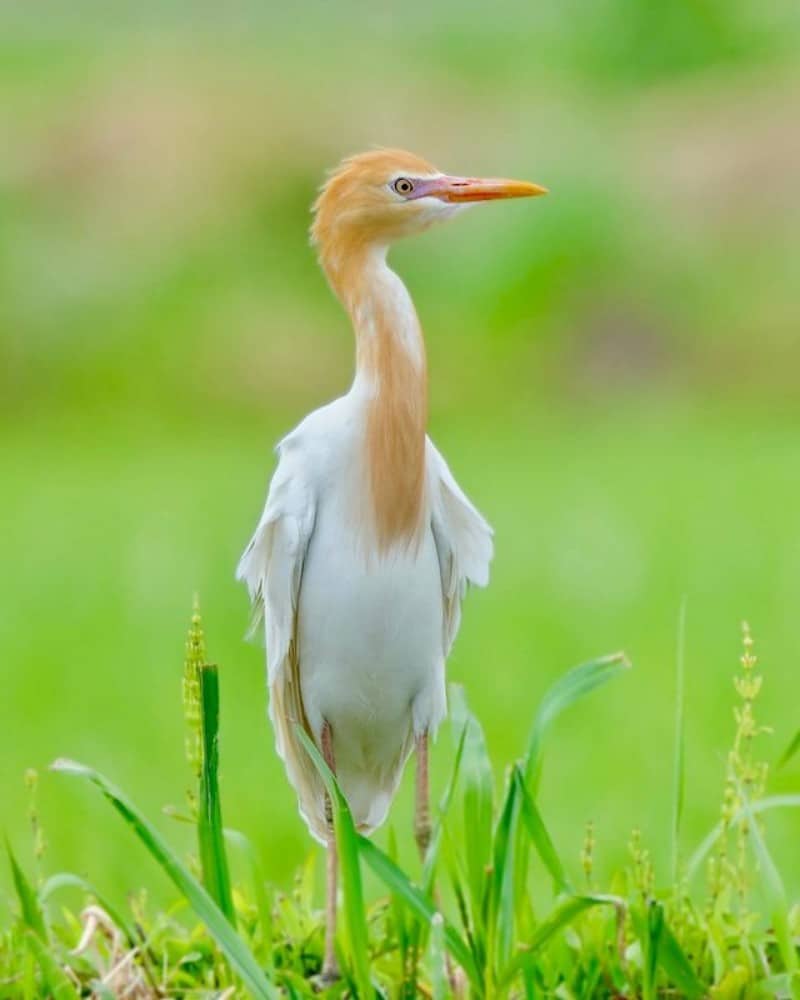 This species of heron is large with a shorter neck than most other heron species. Often Cattle egrets can be found in open areas such as fields, as well as rarely standing in streams. It gets its common name from the fact it often forages around grazing cattle, and may even ride on their backs to pick off insects.

Cattle egrets have distinctive yellow plumes of feathers on the neck and head. This species is native to Africa where it forages alongside such varied grazers as camels and rhinos. I was introduced to North America and has spreas through the continent rapidly. It can sometimes be seen gathering in large groups around tractors in recently ploughed fields. 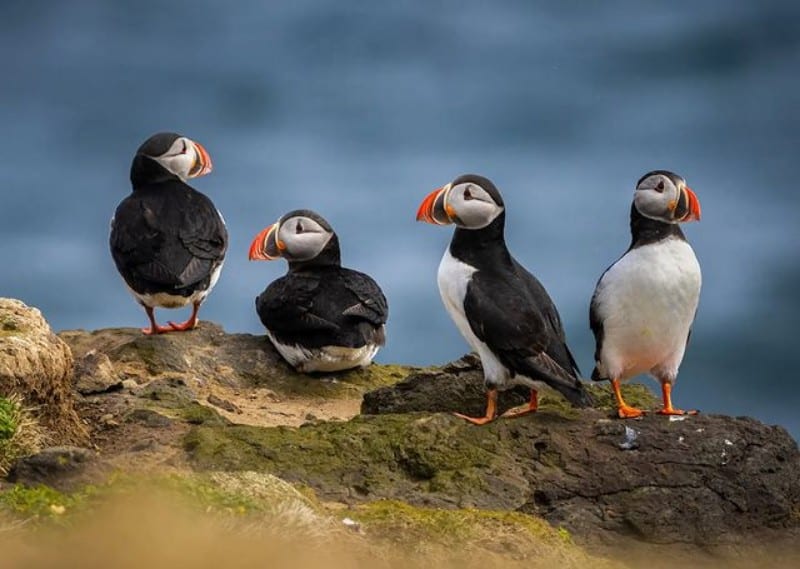 One of the cutest and most easily recognisible seabirds, the Atlantic puffin is well-known to many around the world. It has a distinctive, bright orange, yellow and grey striped bill, orange legs and feet, and smooth black and white plumage.

During the breeding season it can be found around rocky cliffs and on islands in the North Atlantic. In the winter puffins retreat out to the open sea.

Atlantic puffins have short and stumpy wings with which they struggle to fly long distances but use effectively as flippers when hunting for fish underwater.

Like other seabirds, puffins have a preen gland which they use to spread oil over their feathers, waterproofing and adding buoyancy.

Puffins face multiple threats including predation from invasive species, pollutant contamination, disturbed food supplies and a changing climate. This species is therefore classed as Vulnerable by the IUCN (International Union for Conservation of Nature). 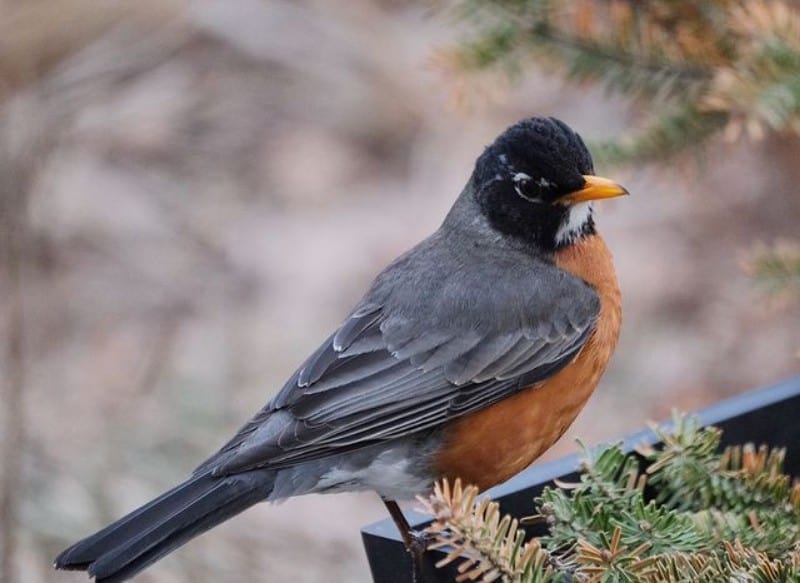 An iconic, orange-chested bird found in North America, the American robin is often found in urban areas and backyards. It can also be found inhabiting more wild areas such as mountainous forests in Alaska.

The American robin is migratory in some areas and resident for the entire year in other areas, primarily in central North America. Like other species of the Turdus genus, these robins feed on the ground, plucking worms, beetles and other insects from the earth. They will also feed on fruits and berries. 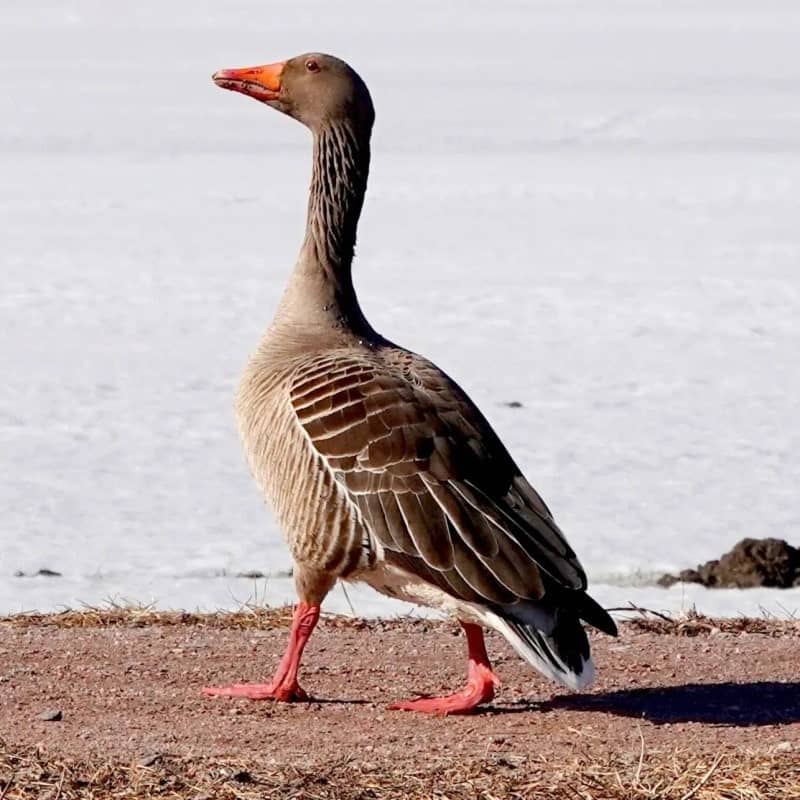 This lovely goose with a pink-orange bill and legs is common throughout Eurasia.  It has a bulky shape and plumage ranging from white through light grey to dark grey.

Often Greylag geese can be found in wetland areas like lakes and marshes, and is expending its range in urban areas such as parks in Europe. Individuals which breed in northern areas of Eurasia migrate further south during the winter.

This species feeds on the ground, often choosing grass and agricultural crops to feed on during the harsh winter season. 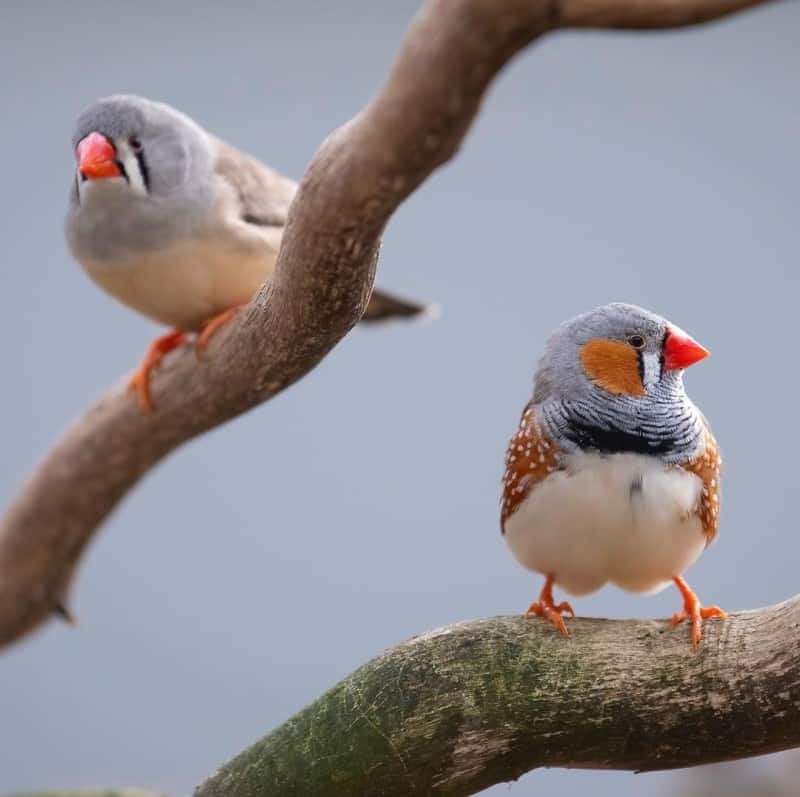 Small finches with stumpy but striking dark orange bills, Zebra finches can be found in the dry, harsh inland of Australia. Their plumage is mostly grey but with beautiful dot and stripe patterning and patches of buff and bronze.

This species often forages in large flocks where they will sing loudly and boisterously. It has been introduced into Portugal and Puerto Rico. They will feed mainly on grass seed which they dehusk deftly with their specially adapted beak. 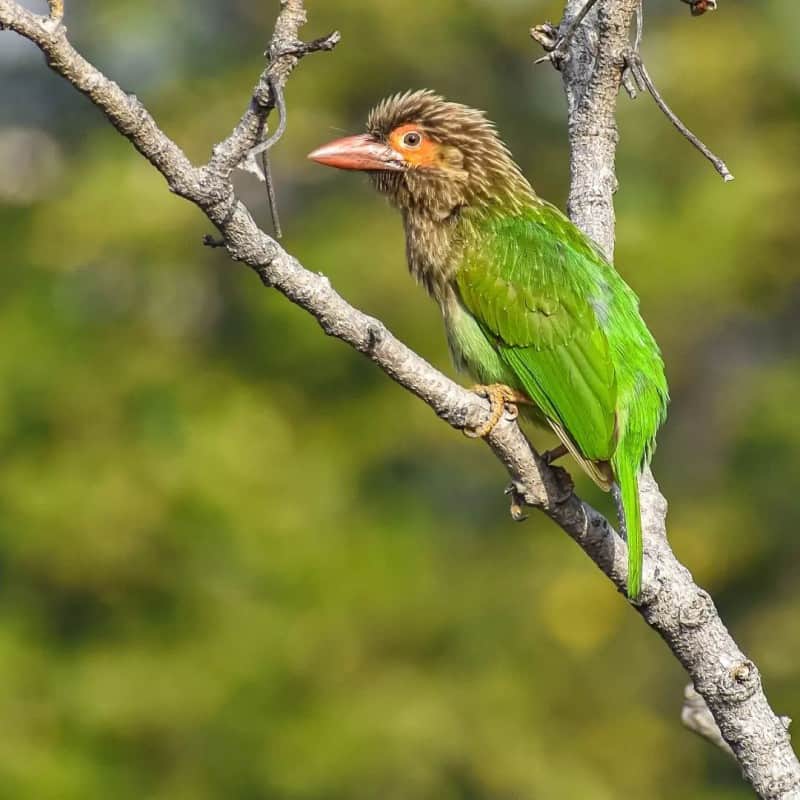 An unusual-looking green barbet with a distinctive brown head and pink-orange beak, the Brown-headed barbet is surprisingly hard to see in the wild. They are more frequently heard with a range of interesting calls.

Usually, this species can be found in relatively dry woodlands and gardens in areas of India and Sri Lanka. Brown-headed barbets feed mostly on fruit and insects, and nest in tree hollows. 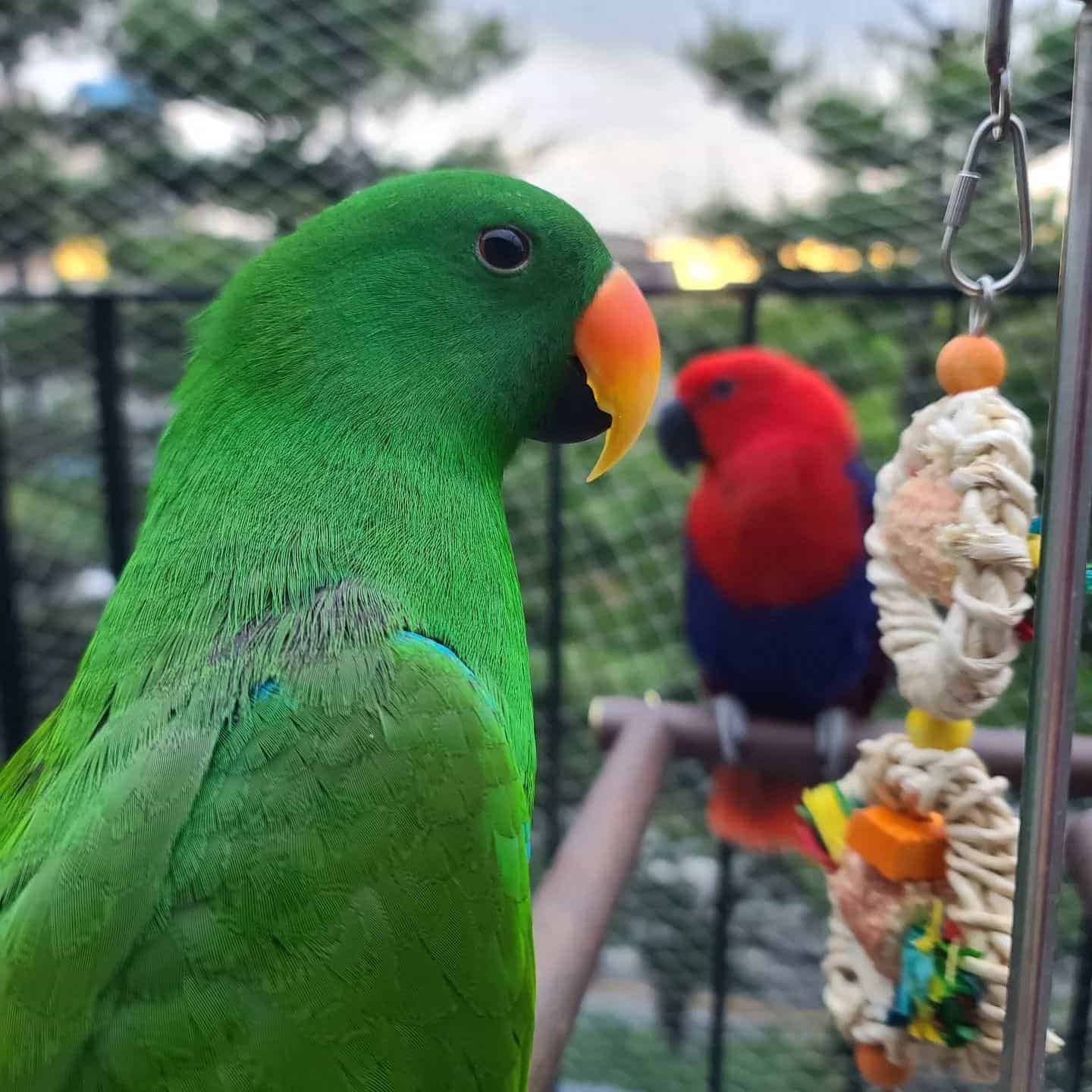 It is the male of this species which boasts a beautiful emerald green plumage and contrasting yellow-orange bill. Females are quite different – bright scarlet red with a black bill!

Eclectus parrots have short tails (for a parrot species) and can be found in the wild in New Guinea and northern Cape York. Often they are spotted early in the morning, flying above forests and making loud, high-pitched, squawking calls.

Often kept as a pet, escapees or birds that have been released into the wild can often be seen in other areas of the world. 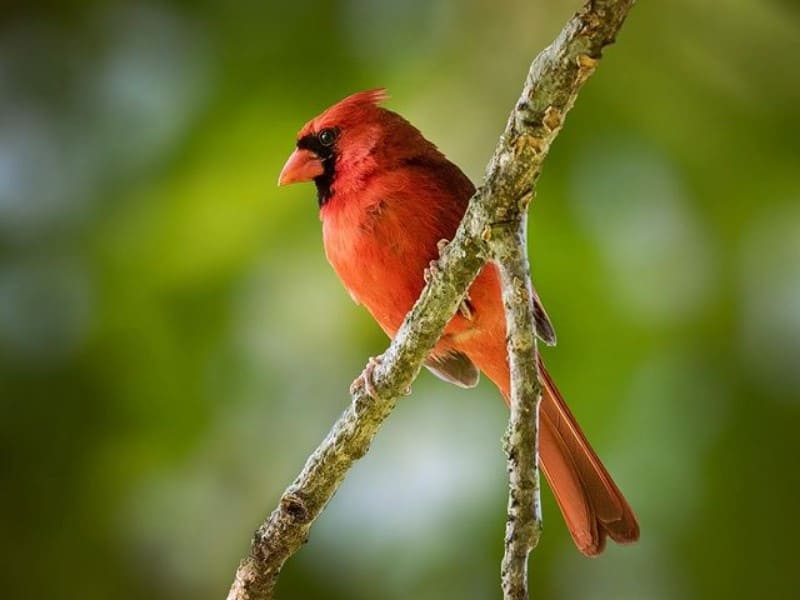 This speices is though of as a regular backyard visitor in eastern North America. It can also be found in some parts of Mexico and through the south-western North America. The beautiful dusty red plumage, long tail, and crest of this species makes it easily identifiable.

Northern cardinals are a social species, often found in small groups or pairs. They prefer densely vegetated areas to which they can easily flea is diturbed. 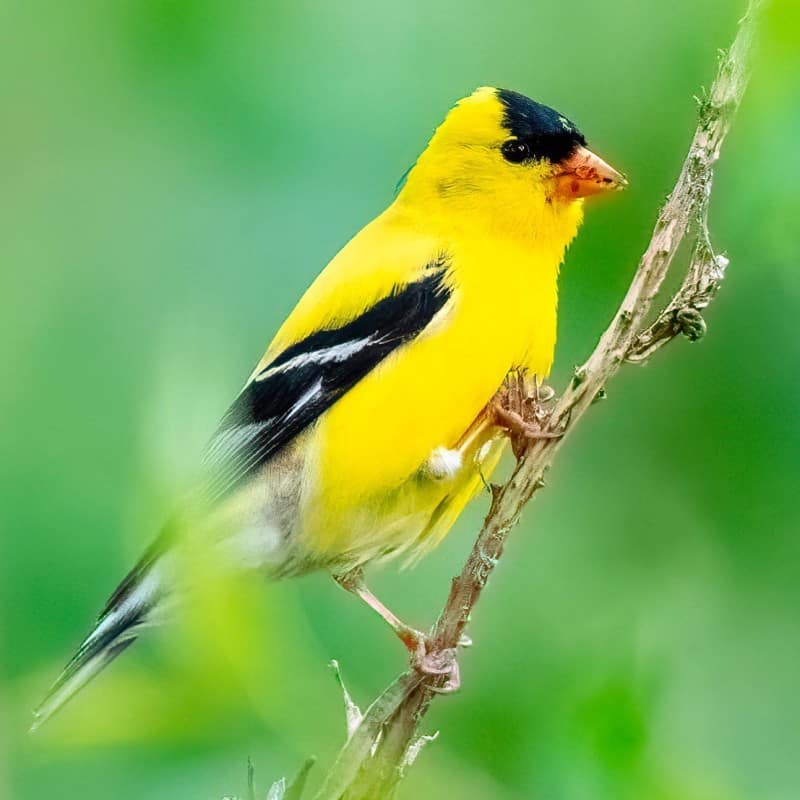 One of the most common backyard species in the USA, the American Goldfinch sports bright yellow bodies and complimentary black wings. While males of this species have the brightest plumage and most striking orange beak, females and non-breeding males have duller coloration.