The fact that birds do not have teeth is only partially true.

A few species of birds developed mandibles with tomia, which are structural alterations that allow birds to grip and help break down their nourishment (hunt, break prey, crack seeds, and so on).

Except for most species of falcons, which have their tomial tooth covered by bone, the tomial teeth of other species (such as shrikes) are made of keratin.

In some birds that feed on fish, tomia have developed into little fangs similar to a saw blade so that the bird can hold the slimy prey.

So, some birds species do have teeth, apparently! And in this article, we invite you to read about them and even see their “grin”. We will start with the most common and end with the most spectacular ones, so fasten your curiosity seatbelts. 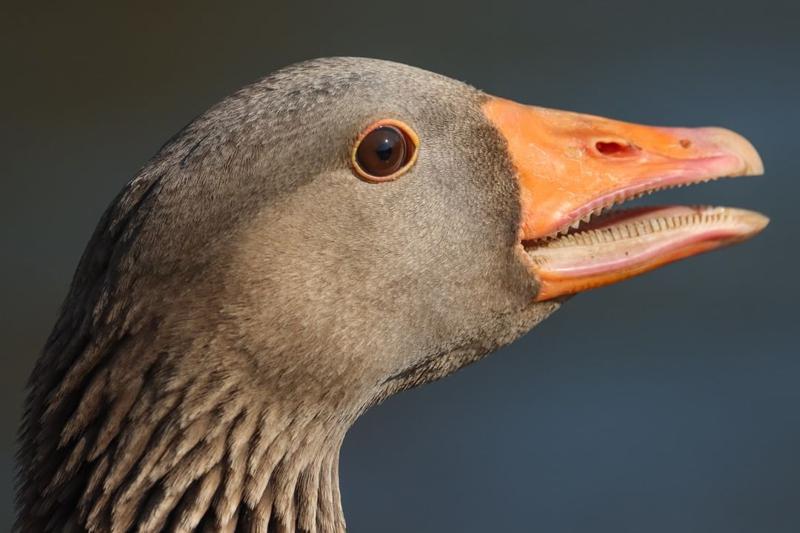 The Greylag Goose (Anser anser) is a large goose with streaky grey and white plumage, pink legs, and an orange beak with tomial teeth similar to a saw.

When it comes to distribution and habitat, the Greylag Goose is widespread; the bird lives near lakes, marshes, wetlands, and urban parks of Europe and Asia, migrating to southern regions in wintertime and returning to its breeding areas in the summertime.

The bird has been observed feeding on potatoes, acorns, and even small amphibians, crustaceans, fish, and insects.

These geese tend to form monogamous lifetime partnerships (only 5 to 8% of geese change their partner) and have a flexible sexual orientation.

Yes, Greylag Goose forms both heterosexual and homosexual couples, and both types of pairs engage in wooing and sexual behavior.

Greylag Goose lays approximately 4-6 eggs (it is not unusual to be more or less) in a nest made on the ground in shrubs, reeds or rushes, or on floating vegetation woven from reeds, heather twigs, grasses, moss, and small feathers lining the bottom.

Common Merganser (Mergus merganser) is a large seaduck, with a few longer feathers on the crest which lie behind the head smoothly, and two types of plumage, depending on the breeding season.

Both sexes are mainly grey, with brown-reddish heads, white chins, and white secondary feathers on the wings in the non-breeding season, (the so-called eclipse which lasts between July and October).

In the mating season, the male is white, with salmon-pink tints, black head with shimmering green shine, grey rump and tail, and black and white wings.

Common Merganser has pink legs and a beak with serrated tomias like most piscivorous species which are similar to a chainsaw (these birds are often known as “sawbill”).

If you wish to see them live, it is useful to know that Common Merganser live in forested areas, on lakes and rivers through North America, Europe, and Asia.

The Common Merganser has a menu formed mostly out of fish but “seasoned” with mollusks, crustaceans, worms, amphibians, insect larvae, and, sometimes, even other birds and small mammals.

To breed, Common Merganser prefers mature forests with trees old enough so the bird can find cavities to make a nest.

However, when the requirement of a forest is not met, Common Merganser manages to breed in holes in cliffs and on steep, high shores.

The female Common Merganser lays about 8 -12 eggs and takes the ducklings in its beak to the river immediately after hatching, to feed on invertebrates and small fish. 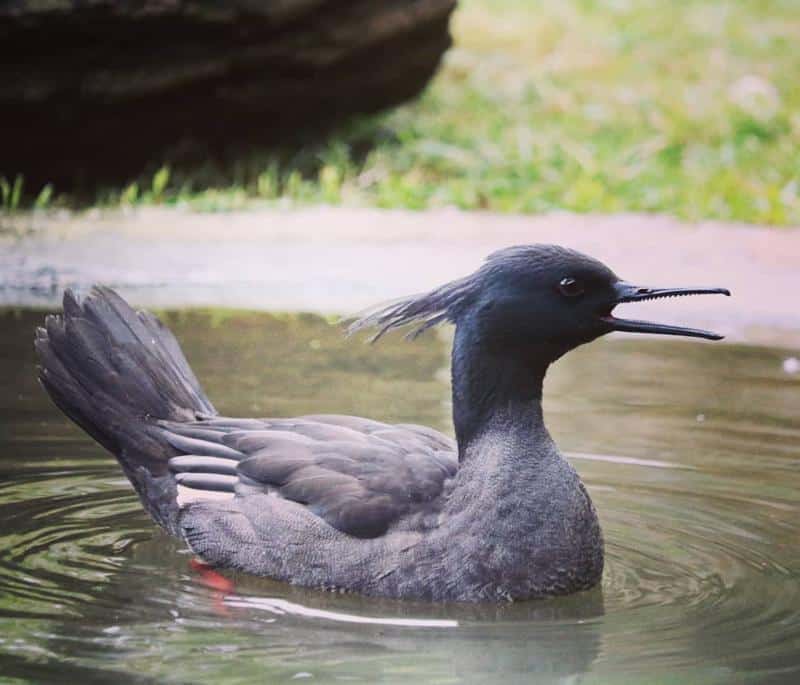 Brazilian Merganser (Mergus octosetaceus) is dark, slender diving duck with a shiny dark-green head and longer feathers behind the head, forming a crest.

The plumage of the Brazilian Merganser starts with dark grey on top of the body, decreases to light grey on sides, and goes up to white on the lower side of the body.

The bird has red legs and a black, jagged beak, with sharped tomial edges which look like teeth.

Sadly, the population is less than 250 birds, found in Brazil (the most concentrated population being in the region of Serra de Canastra), and Argentina.

Brazilian Mergansers prefer isolated mountain regions, where they live in the low density vegetation around clean, fast-flowing rivers and streams.

The breeding season for Brazilian Merganser is believed to be during the austral winter when the rain levels are at a minimum and the waters levels are low.

When it finds a suitable place for nesting and feeding, Brazilian Merganser occupies territories permanently, within 8-17 km along the rivers. Pairs build their nests in rock cracks, tree hollows, and abandoned burrows which were created mainly by armadillos.

The female Brazilian Merganser lays 3-6 eggs in June and July and incubates alone, but both parents raise the ducklings (very unusual for ducks).

The first known bird, from which started the theory of birds being descendants of some dinosaurs species, was Archaeopteryx, also known as Urvogel (literally, the first bird, in German).

Although Archaeopteryx has been accepted as the oldest known bird (lived 150 million years ago) until the early 21st century, other avialans have been discovered that are believed to be older than Uvorgel. 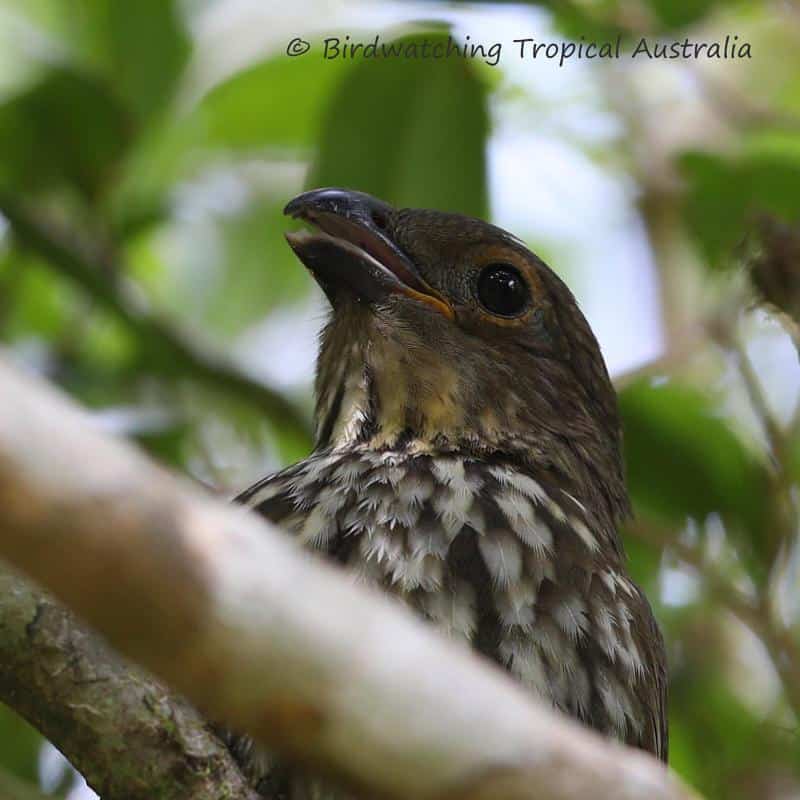 The Tooth-billed Bowerbird lives in mountain forests from the northeast of Queensland, Australia, the bird is endemic to this region.

Despite its scary tooth-like beak, the Tooth-billed Bowerbird is herbivorous, feeding itself primarily with fruits and green leaves of forest trees.

What is truly special about the Tooth-billed Bowerbird is the mating ritual, where the male builds a bower, clearing an area of forest floor from dry leaves and decorating it with fresh, green leaves.

The area must have at least one tree trunk on which the male can roost and call upon a mate, whistling, hissing, and squeaking.

The male spends hours beautifying the bower with shells, flowers, feathers, stones, berries, coins, nails, and pieces of glass and or plastic.

Females searching for a partner visit multiple bowers and remember the favorite ones, to which they return several times to inspect the quality of the bower and watch the male work.

Although research suggests that males adjust their performance after the female’s preferences and response, many underperforming males are left without a partner. Females mate with ‘top’ males and tend  to return to them in the next season. 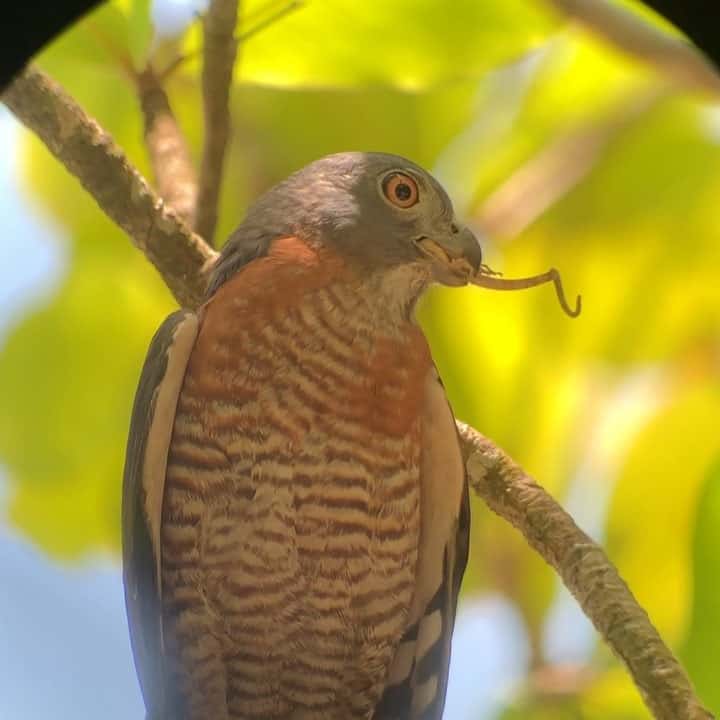 Double-toothed Kite (Harpagus bidentatus) is a small-sized hawk, a raptor of dark grey color, with a white back patch visible in flight, making the bird one of the easiest to identify.

Chest and belly are brown-reddish, with white and grey stripes on the stomach and a bluish-grey head.

The greenish-yellow cere continues with a blunt beak that ends with a black tip, and it’s double-toothed on the superior mandible, thus the bird’s common name.

The Double-toothed Kite lives in humid low and middle-height forests and forest edges in subtropical and tropical areas.

When it is not taking the prey flushed out by the bigger mammals (the bird is known to follow some groups of monkeys), Double-toothed Kites perch above the rainforest floor and dive downwards rapidly to hunt insects and lizards which represent its main prey.

The breeding season of the Double-toothed Kite is somewhere between early April and early July.

At the edge of the rainforest, on a forked branch, high in a tree (up to 30 meters), a pan-like shallow nest is made out of twigs in which the Double-toothed Kite female lays two eggs and incubates them. 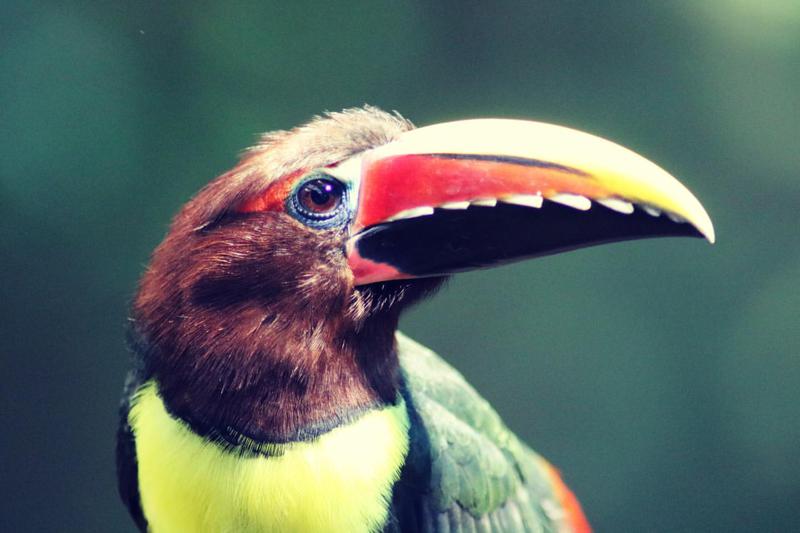 Green Aracari (Pteroglossus viridis) is a small toucan, amongst the smallest from the family of Ramphastidae.

Except for the color of the head, which is black for males and dark reddish-brown for females, Green Aracari has dark green plumage on its back, yellow on its chest, and greenish legs.

The bird has a colorful beak (red, yellow, and blue) with serrated edges that look like teeth growing towards the tip of the beak.

The diet of Green Aracari is omnivorous, including fruits, nuts, eggs, insects, and small mammals; they are even fed cooked sweet potatoes in the National Zoo of Washington D.C.

The Green Aracari is another species that prefer to search for other birds’ deserted nests instead of building its own nest (usually woodpecker holes due to their high position in the tree).

The mating season lasts from February till June, the Green Acari female lays 2-4 eggs, and both parents participate in raising the young.

Although the younglings can fly at about five weeks after hatching, the parents feed them up to 8 weeks. 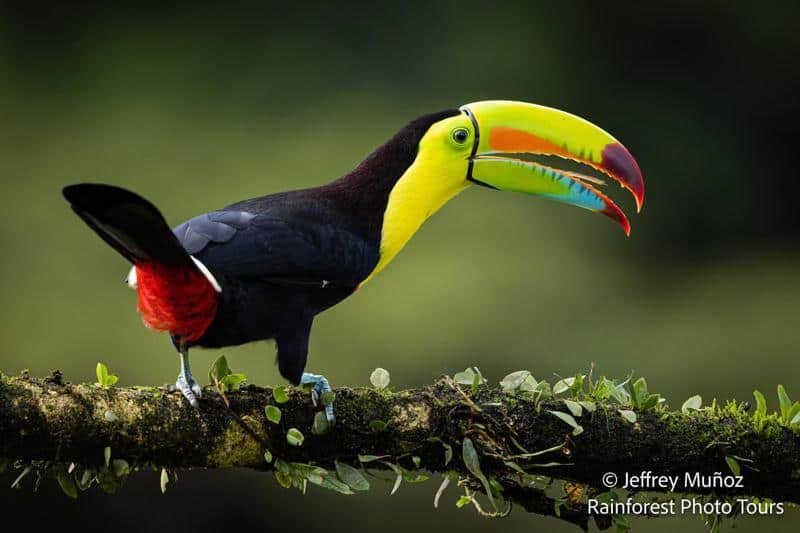 Keel-billed Toucan (Ramphastos sulfuratus), also known as “rainbow” toucan, is a bird with a relatively small body in comparison with the size of its beak which makes up ⅓ of the birds’ length.

The Keel-billed Toucan’s plumage is dark, with a bright yellow stain on the chest, it has greenish skin around the eyes, and the blue feet have two toes in front and two toes in the back, so the bird can perch and move around easily on the tree branches.

The Keel-billed Toucan’s beak is jagged on the edges, and, although seemingly big and heavy, it is hollow and very light.

The bird uses it in feeding and defending itself, dexterously swinging and pecking with it.

Keel-billed Toucans live in small families in the canopies of tropical, subtropical, and lowland rainforests in Colombia and from Southern Mexico to Venezuela.

The diet of Keel-billed Toucan is omnivorous; although the bird prefers fruits, it is also known to feed on insects, lizards, eggs, nestlings, and snakes.

The dexterous beak of Keel-billed Toucan helps it enjoy a larger variety of fruits, otherwise difficult to reach; the bird uses the beak to break the fruit and toss its head back to swallow it.

Keel-billed Toucan is a monogamous species, remaining with one partner during the mating season and, in some cases, returning to the same partner in future seasons also.

The female Keel-billed Toucan lays between 1 and 4 eggs in a pre-existing tree cavity, and the parents share the incubating and caring for the younglings.

When they hatch, the chicks have their eyes closed for about three weeks, they have no feathers, and the beak is not fully developed.

Even though birds do not have real teeth, some species developed spikes on the edges of the mandibles called tomial teeth.

Tomial teeth are keratinous (except for the “tooth” of most species of falcons which is made out of bone).

Depending on the birds’ environment and feeding habits, the tomia have developed into ridges, sharp projections along the upper mandible (which creates a tooth-like beak), and saw-like serrations.