The tufts located on top of a bird’s head have different roles from expressing the bird’s emotional state and stress level to wooing and aggression. Technically, these tufts are called crests when it comes to birds.

In this article, the beauty of the most astonishing birds with tufted heads will captivate you, and their secrets will tickle your curiosity.

First of all, it should be mentioned that there are two types of tufts: ear tufts (like some species of owls, for example), which are too far from the top of the head to be considered crests, although they are made of feathers.

The second type of tufts are on top of the bird’s head, and these are crests of all different shapes and sizes. It is this kind we will be exploring today.

I invite you to take a deep breath and prepare to be mesmerized because fourteen of the most beautiful birds with tufted heads are about to model their “hairstyles” just for you.

The Tufted Ducked won its place in our list due to its casual tuft of feathers hanging down from the back of the crown.

The tuft is rarely visible since the bird’s head is wet most of the time due to its feeding behavior (diving below the water) which means the feathers are flattened against the head. 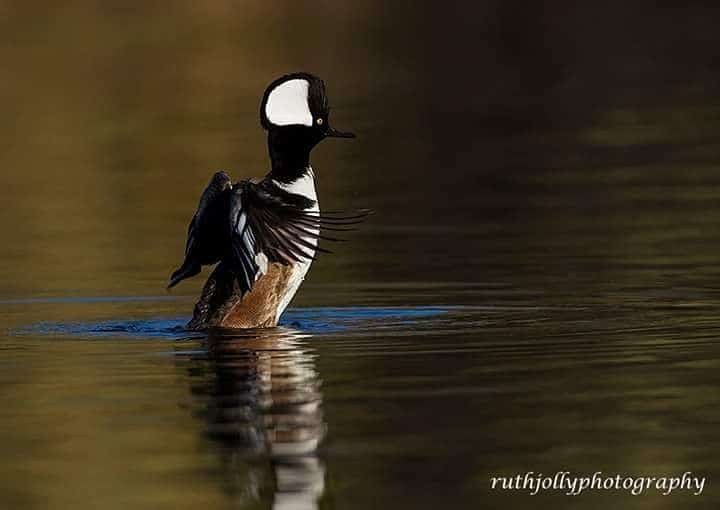 Hooded Merganser (Lophodytes cucullatus) is the smallest species of merganser and the only living species from the genus Lophodytes (from greek: lophos meaning “crest” and dutes meaning “diver”).

Both male and female Hooded Mergansers have tufts on their heads, forming a crest which starts from the beak and ends at the back of the head.

The female’s crest is light reddish-brown, while the male’s crest is black with white patches on each side of it. It becomes more visible when the bird raises its crest during courtship displays.

The Hooded Merganser lives in woods near rivers, creeks, fresh, brackish estuaries, and edges of ponds and feeds mainly on fish, completing its diet with crustaceans and water insects.[1] 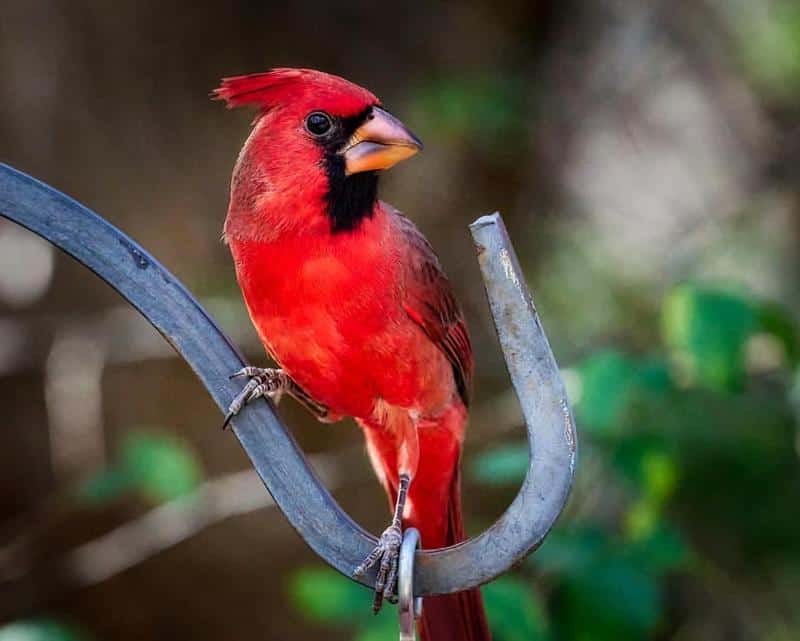 Northern Cardinal (Cardinalis cardinalis) is a mid-sized songbird, a typical visitor in backyards through North America and Mexico.

The male is nearly completely red (except its black face), and the female is brownish with reddish wings and tail.

Both male and female Northern Cardinals have a tuft on top of their heads, forming a crest, which is richer in color for males and sharper in form for females. 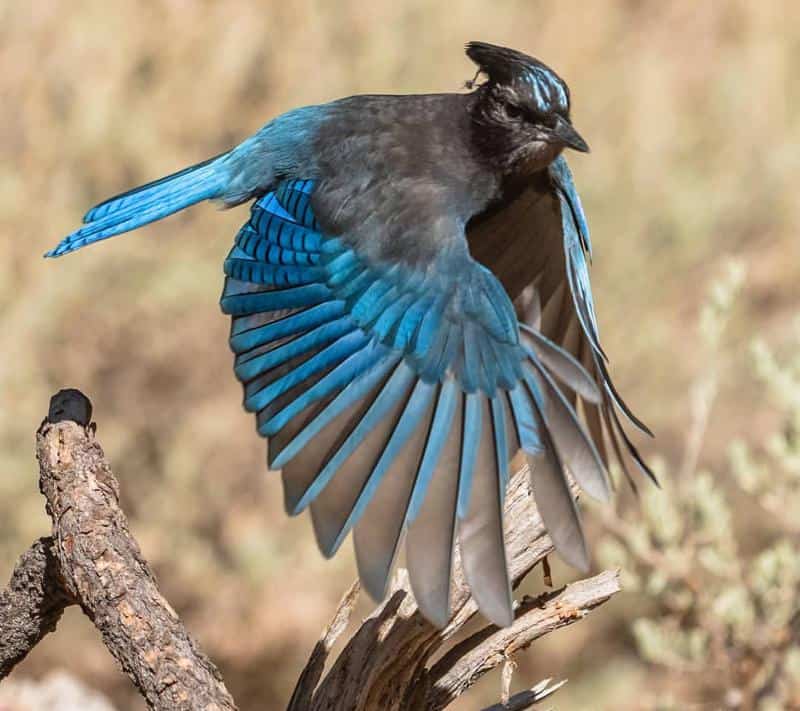 Steller’s Jay (Cyanocitta stelleri) is an astonishing and aggressive bird, unmistakable due to its black and blue plumage and the shaggy crest.

The tuft on top of the head has two blue or white stripes in front, giving the bird two vertical, angry-looking “eyebrows”.

The diet of Steller’s Jay is omnivorous, it feeds itself with seeds, nuts, fruits, small rodents, eggs, nestlings, and even small reptiles.

Steller’s Jays are widespread in western North and Central America, from Alaska to Nicaragua.[3] 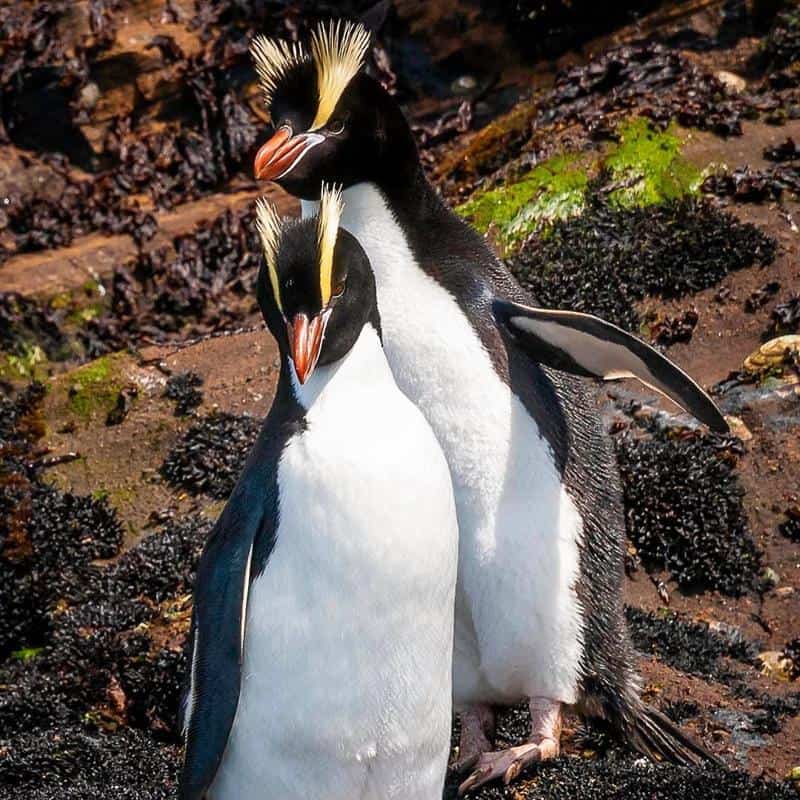 Erect-Crested Penguins (Eudyptes sclateri) are a small to mid-sized penguin endemic to New Zealand. It is the largest crested penguin species and the fourth heaviest extant penguin.

Erect-Crested Penguins are distinctive by the yellow tufts that grow above their eyes, forming a short, erect, brush-like crest.

The menu of Erect-Crested Penguins is made up of krill and squid, delighting themselves from time to time with small fish. 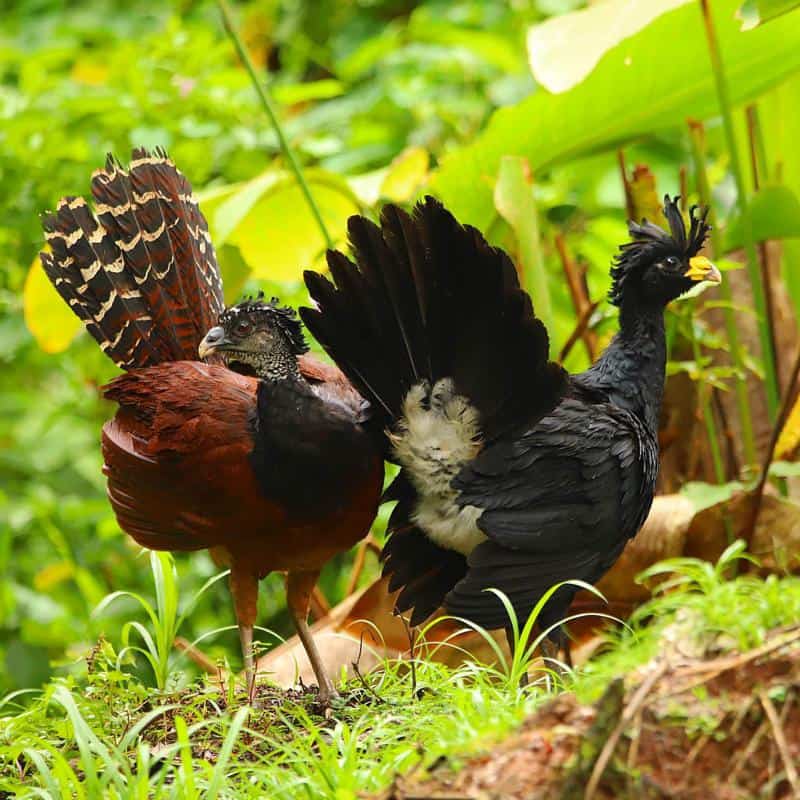 The Great Curassow (Crax rubra) is a sizeable, hearty bird living in small groups, feeding on the ground but nesting and roosting in the trees.

Both males and female Great Curassow have curly tufts that form a unique waved crest, but they differ in plumage colors: the males are black with a white belly, while females have three morphs (barred, rufous, and dark).

The Great Curassow forages on the ground for fallen fruits and seeds and occasionally scrapes the soil for arthropods or small vertebrates.

The bird’s natural habitat runs from southern Mexico to western Ecuador, but, sadly, at present, national parks and reserves have become the only places where this beauty can find refuge.[4] 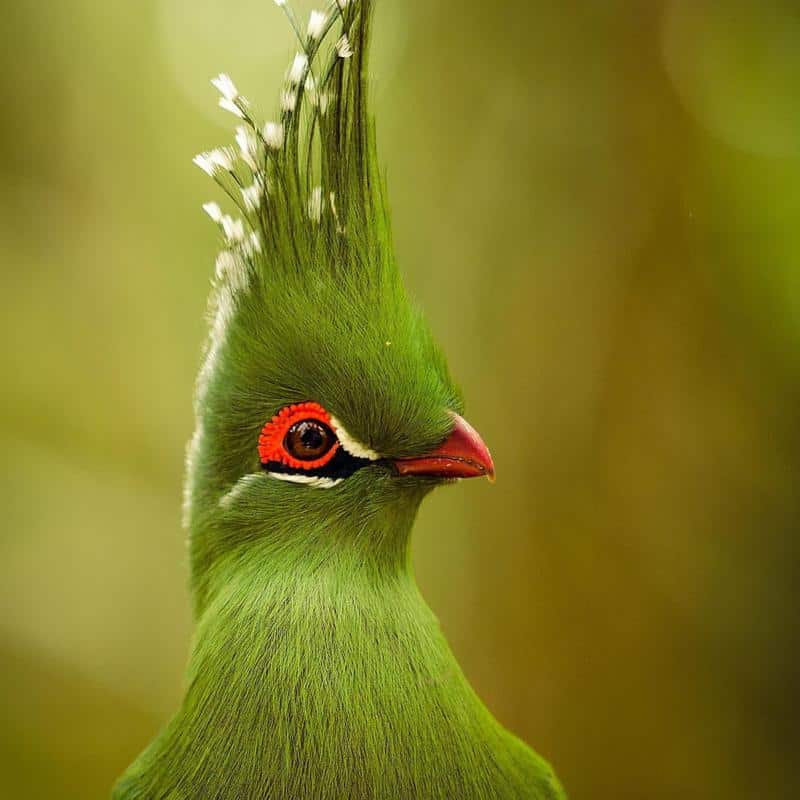 Guinea Turaco (Tauraco persa), also known as Green Lorie or Green Turaco, is a small green bird that effortlessly hides in the canopy in plain sight.

Guinea Turacos are a true wonder to watch, with glossy plumage, black and white “makeup” around their eyes, and a green chest, neck, and head.

As if that wasn’t enough, the Guinea Turaco also has an upright tuft on its head, which forms a circular green crest, that may have a red or purple tip.

Guinea Turacos feed on a large variety of fruits, some flowers, and buds found in subtropical and tropical moist lowlands.

The bird has an extensive range in the forested areas and savannas of West and Central Africa. 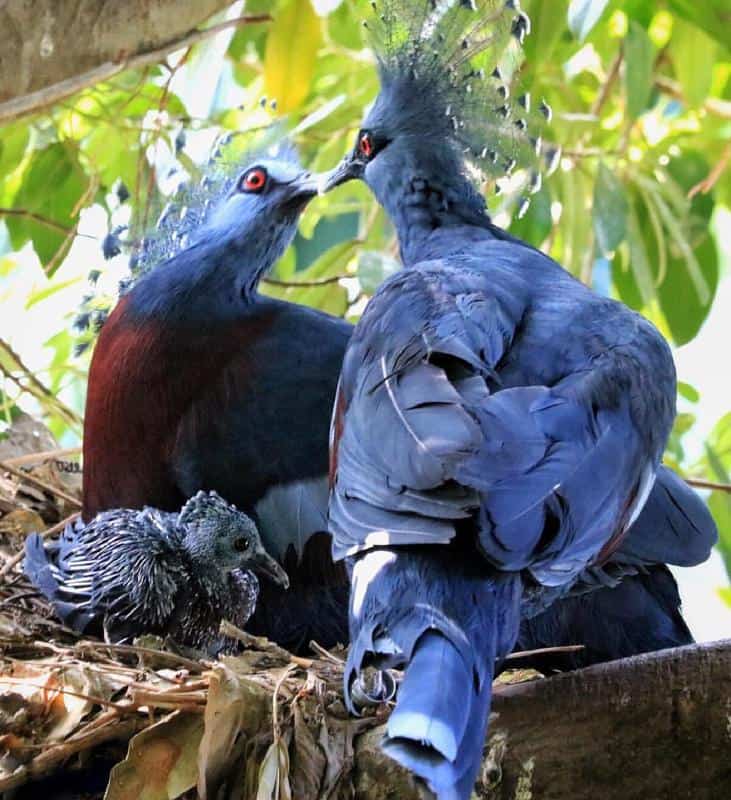 This exquisite beauty has a tuft on the head made up of blue white-tipped feathers, with a pattern similar to lace.

During the courtship ritual, the male Victoria Crowned Pigeon bows his head to the female, stretches forward, waves his head up and down while simultaneously swinging his spread tail, and then lifts its wings.

The Victoria Crowned Pigeon usually feeds on seeds, flowers, and leaves, but they supplement their diet with insects. 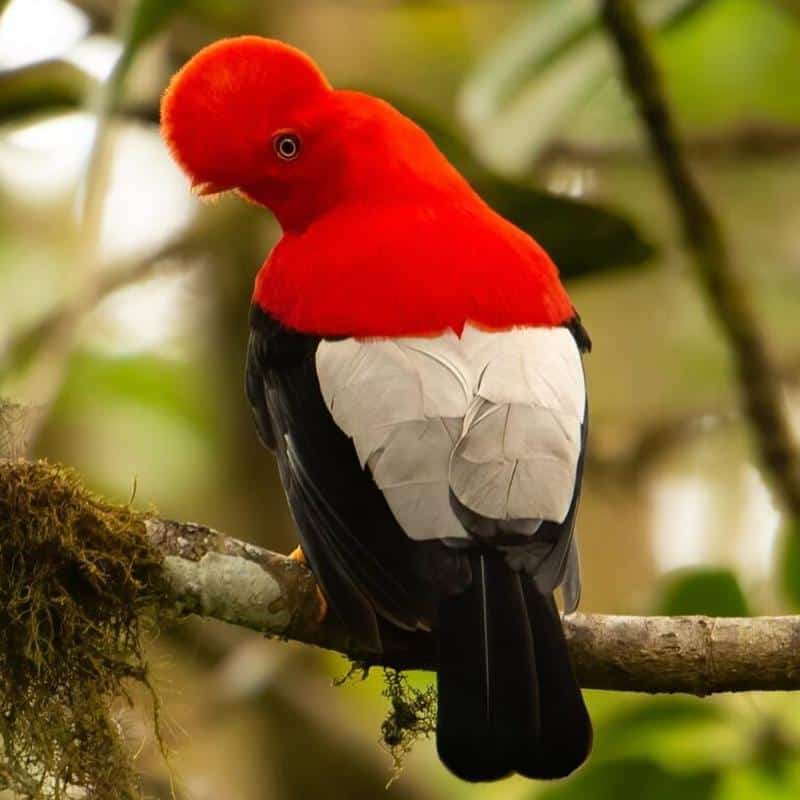 A true delight to watch, the Andean Cock-of-the-Rock male has a bright red-orange cape, black body, grey wings, and a prominent tuft of feathers extending over its beak, creating a disk-shaped crest.

And since I promised to reveal some birds’ interesting secrets, check this out!

Besides its exquisite look, the Andean Cock-of-the-Rock also has a very complex mating ritual:

The males gather at collective meeting spots (called “leks”), where they display their rich plumage and perform smooth moves. Competitor males will start roosting in pair or small groups to simulate confrontational displays (bowing, beak-snapping, wing-flapping, squeaking, grunting, etc.). All the craziness and noise increases frantically when a female comes by to evaluate their performance.[5]

The Andean Cock-of-the-Rock feeds on fruits, seeds, and, occasionally, insects and small vertebrates.

The bird is original from Andean rocky humid cloud forests, but it can also be found on ravines near water and forest streams in South America. 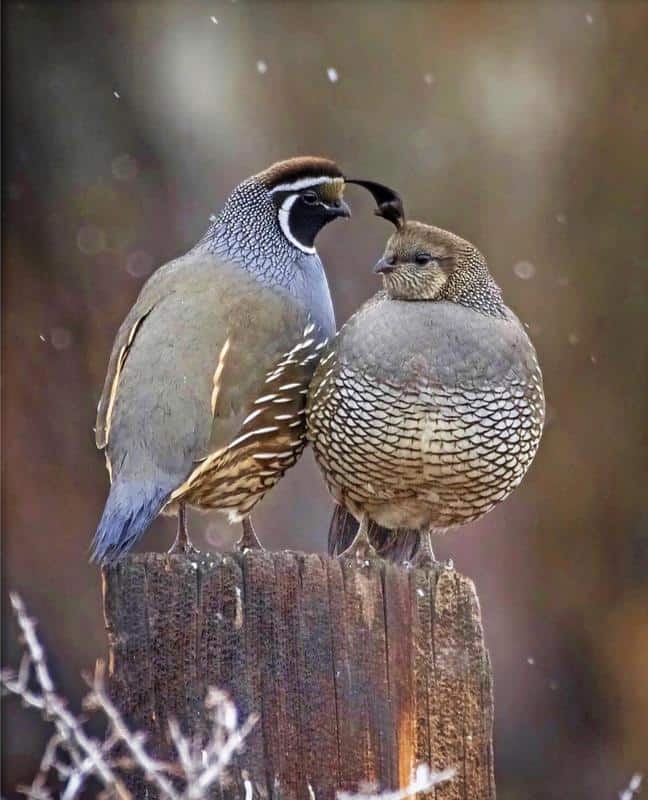 California Quails (Callipepla californica), also known as Valley Quails, are small, round birds that live in “coveys” (small flocks) on the soil.

Bathing in the sun and in newly turned or soft ground is one of the California Quail’s favorite group activities.

The plumage color is grey and brown, with white stripes on the sides and scaled belly. Male California Quails have a black face and a longer, more wavy tuft.

Both males and females have a tuft made of six feathers that fall ahead of their faces; the tuft is black for males and brown for females.

California Quails feed early in the morning, scratching the soil and foraging for seeds and leaves from a wide variety of plants, including flowers, acorns, berries, and bulbs. At need, it supplements its diet with insects.

The California Quail has been the state bird of California since 1932. 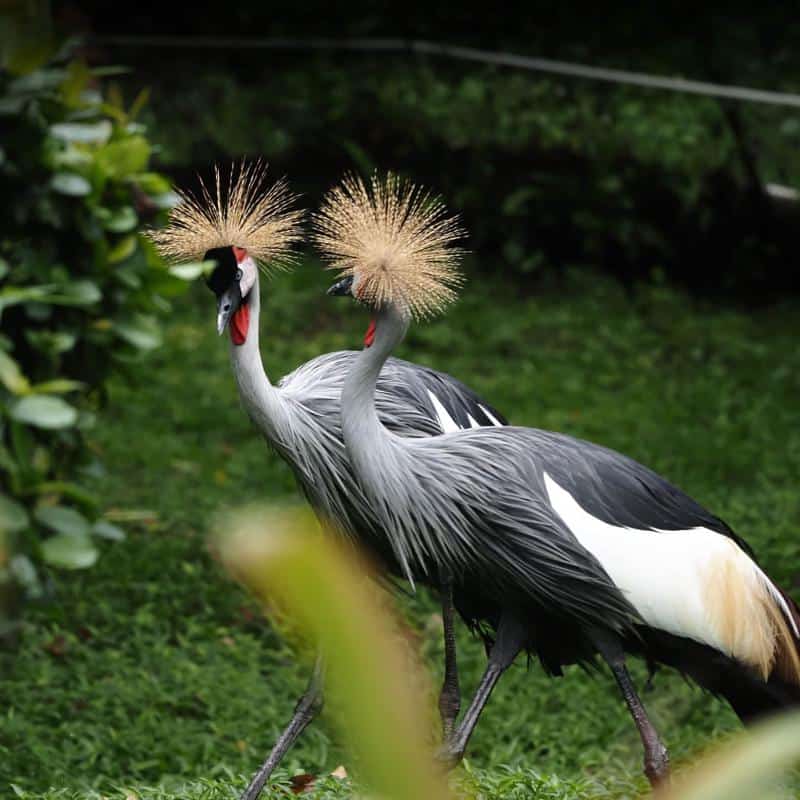 And no wonder: Grey Crowned Cranes have a large grey body, white wings with brown and yellow-gold feathers, white sides of the head, and two red sacks under their beaks.

In case this wasn’t enough, Grey Crowned Cranes have tufts made up of golden plumes, which form a crown around the bird’s head.

Originally from wetlands and grasslands of eastern and southern Africa, the Grey Crowned Crane is now the national bird of Uganda. 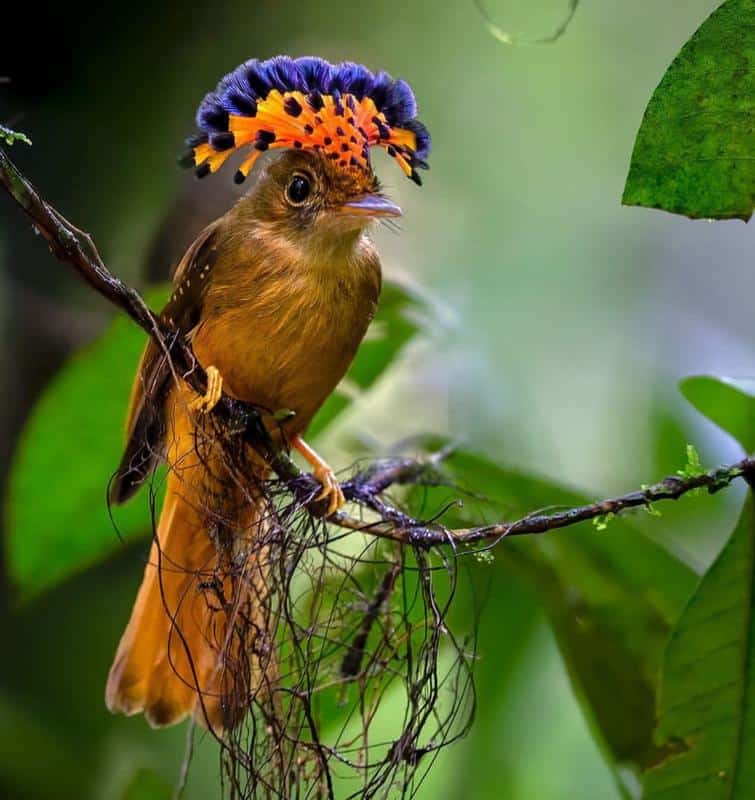 Amazonian Royal Flycatcher (Onychorhynchus coronatus) is a medium-sized flycatcher with a mix of dark brown and dark yellow body plumage, and a reddish-cinnamon rump and tail.

Both males and females have a stiff tuft that forms a fan-shaped crest; the yellow-orange crests belong to females, while the red ones belong to males.

Unsurprisingly, considering its name, the Amazonian Royal Flycatcher is an insectivorous bird that inhabits humid lowlands along streams and seasonal floodplain forests in the Amazon.

The Amazonian Royal Flycatcher lives in the open, mid-level canopy, fluttering in search of food, single or in pairs. 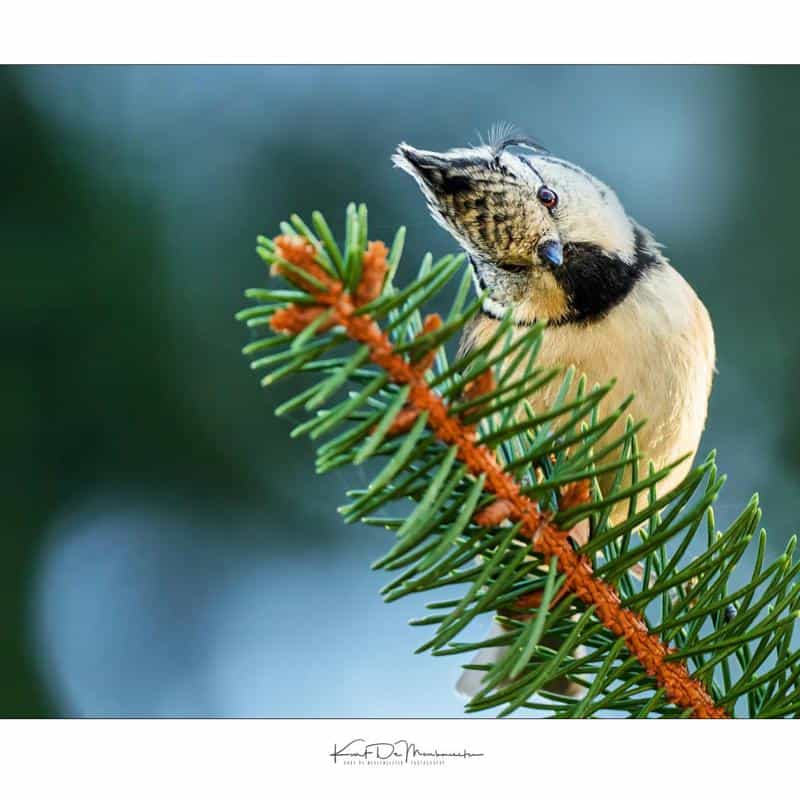 The European Crested Tit (Lophophanes cristatus) is a small songbird, one of the only species with such a unique tufted head from northern Europe.

European Crested Tits have greyish brown plumage on the back and wings, a white head with black eye rings, a curved black stripe on the cheeks, and a black neckband.

Moreover, this beauty can be easy to spot due to its famous, peaked tuft, making the bird look like it is wearing a crown.

Like other tits, the European Crested Tit lives in pairs and feeds on seeds (especially those of pine), caterpillars, and insects.

The European Crested Tit is a common inhabitant of coniferous forests through central and northern Europe, and deciduous forests in France and the Iberian Peninsula. 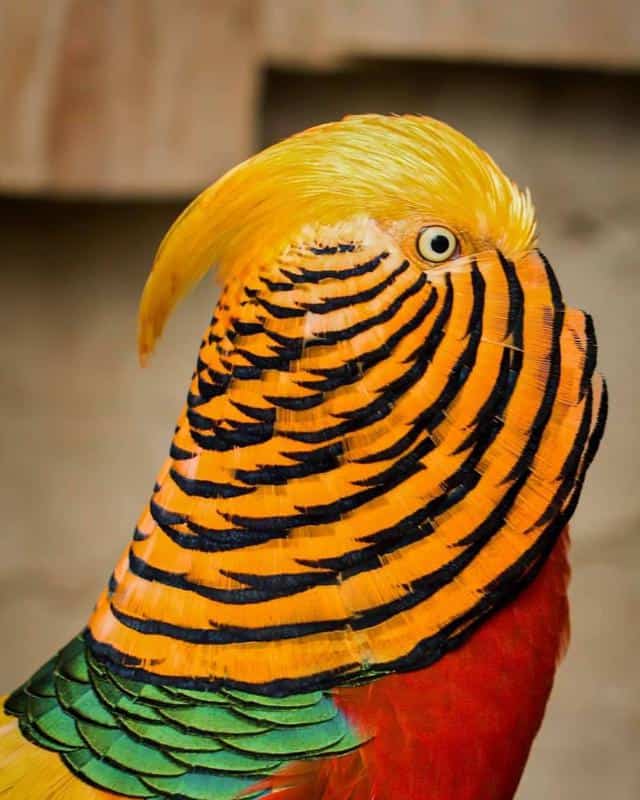 The Golden Pheasant (Chrysolophus pictus), also known as the Chinese Pheasant, or Rainbow Pheasant, is a heavy-bodied ground-feeding bird so vividly colored that it is worthy indeed of the title “rainbow”.

While the female may not be so spectacular with its duller, mottled brown plumage, the male is astonishing.

Besides its bright, vivid body color, the male Golden Pheasant also impresses with the tuft that starts on top of the head and runs down the neck, creating a cape-like look.

Being a shy and sensitive bird, the Golden Pheasant prefers areas without disturbance, and can be found in dense forests and woodlands.

Although originally from mountain forests areas in China, feral populations of Golden Pheasant have established in the north of Europe, the U.S, Mexico, South and Central America, Australia, and New Zealand.