We share our environment with these beautiful little (or sometimes pretty big) creatures, with hypnotizing plumage that mesmerizes us every time we are lucky enough to see them.

From all sorts of colors, with stripes, dots, or extra feathers, these unique plumages tell us secrets about the type of bird in front of you, to which species it belongs, where it lives, where it migrates, what sex it is, its age, and so on.

This article will introduce you to 10 birds with one or more white stripes on their wings. 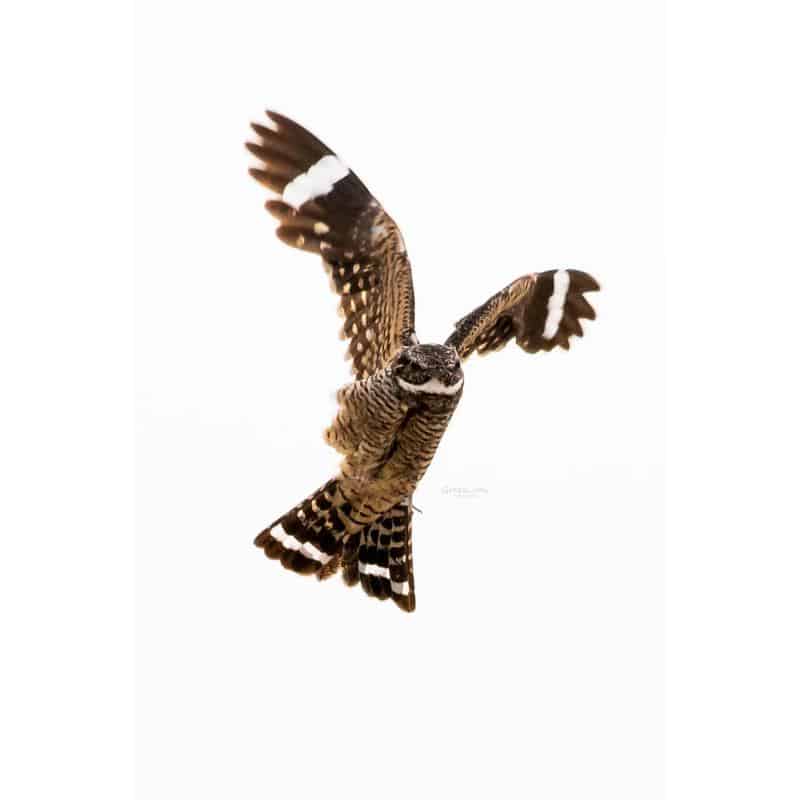 This species has long wings and plumage of buff, brown, and grey colors, with one large white stripe close to the wingtip.

It feeds itself with insects, catching them most actively at dusk or dawn. During the day, it rests on the ground or roosts in a tree.

The wooing process starts early spring or summer when males start puffing up their white throats and chase females in flight.

The couples could remain together even a bit longer after the breeding period.

To distinguish a male from a female Lesser Nighthawk, know that (some) females are slightly smaller, more mottled, and have a smaller wing stripe.

Also, the female Lesser Nighthawk can be distinguished by wider frontal dark stripes, more buff-colored underparts, and more intense mottling on the back. 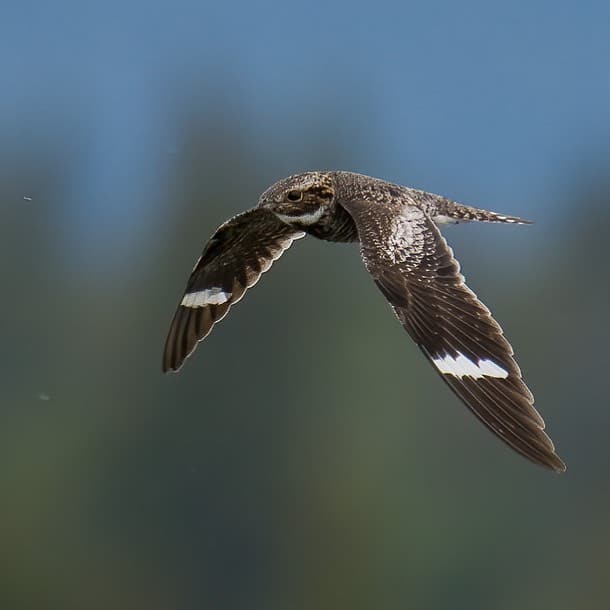 The plumage of the Common Nighthawk is a mix of white, black, and grey, buff, with very long pointed dark wings, “cut” at two-thirds by a bright white stripe.

The Common Nighthawk feeds itself on insects, most actively in mornings and evening, when they can be seen flying in looping patterns.

They rest on the ground or roost on a tree branch during the day, and are quite difficult to observe in both cases due to their well-camouflaged plumage.

Common Nighthawks could gather in large flocks when feeding on open, insect-rich areas or migrating.

The mating ritual is a bit unusual: males start courting by flying 5 to 30 meters high, diving directly to the ground, and pulling up about 2 meters above the ground.

The difference between male and female Common Nighthawk is that the male has a white throat patch and white stripe on the tail, while the female doesn’t have a tail stripe at all, and the throat is cinnamon/light brown colored. 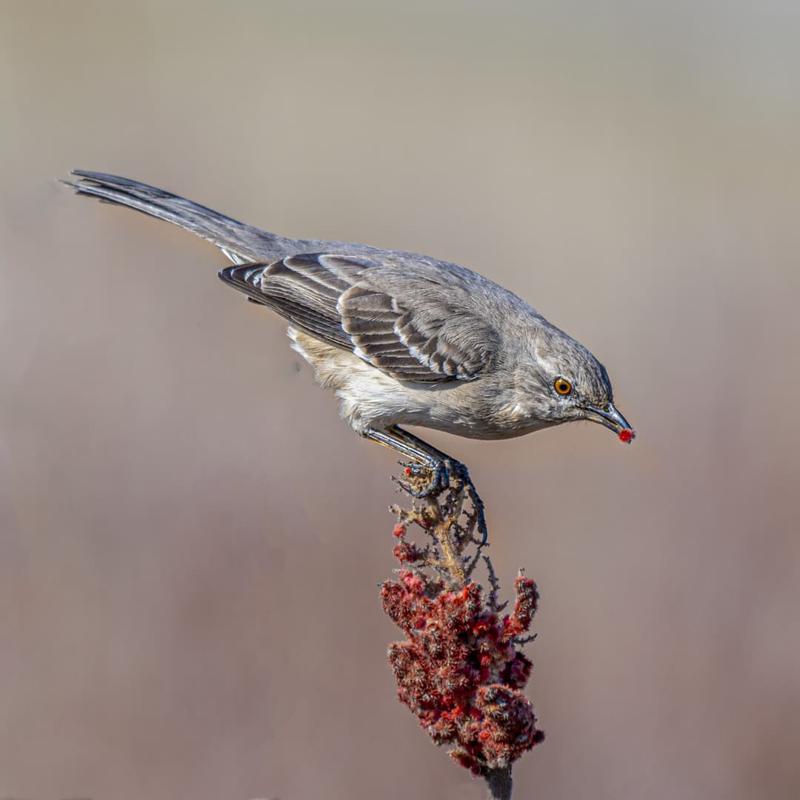 The plumage of Northern Mockingbird is grey-brown, lighter on the belly and breast, with two white stripes on each wing.

The bird also has a white patch on each wing, visible on roosting birds. When it flies, these patches become large white flashes.

The Northern Mockingbird is an omnivore, feasting on insects in the summertime and switching to the veggie menu based on fruits in the wintertime.

Northern Mockingbirds can be seen anywhere: on fences, in high vegetation, near houses, or even hopping along the ground. It is very territorial, and, no matter if alone or in pair, it will firmly chase off intruders.

This species mates in spring and early summer, and pairs usually remain together for the whole breeding season, or, sometimes even the following years.

Nevertheless, there are known cases where male Northern Mockingbirds breed with more than two females.

The distinction between male and female Northern Mockingbird can barely be noticed by plumage alone; the only noticeable difference being that the male is a bit larger.

Another difference lies in the behavior: females incubate the nests while the males build the nest, defend the territory, and train the younglings. 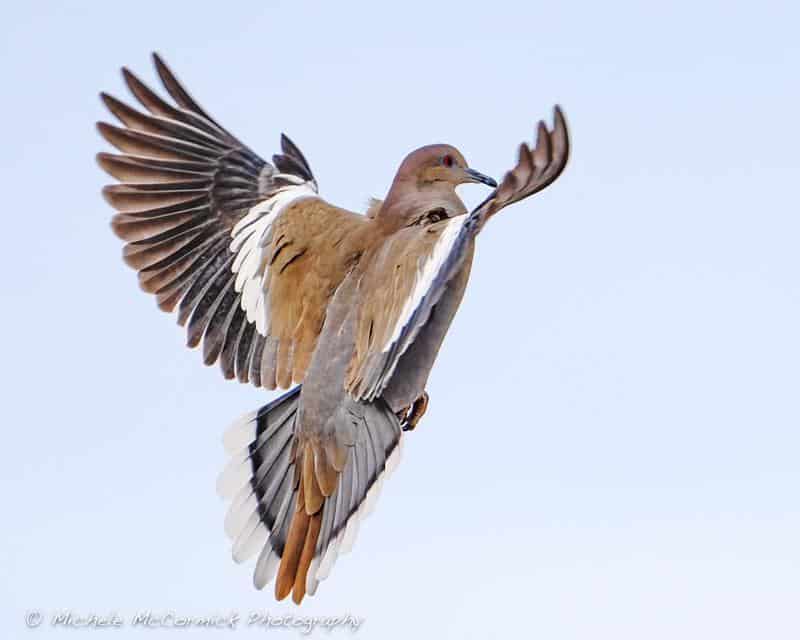 White-winged Dove (Zenaida asiatica) has its origins in the bushes of the desert, but can now be found near human settlements.

The White-winged Dove has immaculate brown upperparts and tidy white half-moons on the back of the wings. These crescents turn into flashy white stripes during flight, giving the bird its common name.

They can often be seen at high bird feeders or flying toward your window when under stress, so make sure you have bird-safe windows.

The White-winged Dove mating ritual involves the male flapping up and gliding down in wide circles, and while roosting, it rises tail, fan it open fast and then shut it to display black and white tail design.

The ritual involves both partners nodding and making preening movements; they nest in bushes, trees, or cactuses, 10 – 70 cm above the ground.

There are no visible distinctions between adult male and female White-winged Doves, but some differences exist between the younglings and adult birds.

While adult birds have grey or grey-brown head and neck, with a wash of pink on the neck and chest,  the younglings are more faded on the head, with delicate pale grey fringes on the scapulars and wings covers. 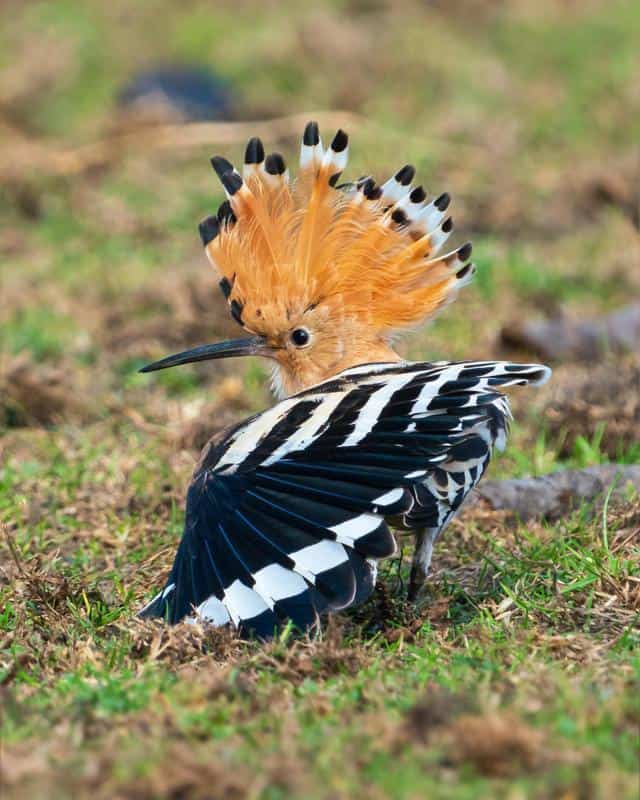 The Hoopoe (Upupa epops) is a bright-colored bird with an orange body and chest, and black and white striped wings. It can be recognized by the crown of feathers it has on top of its head.

Hoopoes can be found across Africa, Asia, and Europe in farmlands, grassy areas, orchards, and trees.

Hoopoes feed on insects, after which it probes the ground with its long beak. It can also catch lizards sometimes.

The mating ritual of Hoopoe involves the male singing insistently in the early morning, declaring the territory of the nest.

There have been observed fights, song duels, and chasing among same-sex birds, where the excited birds fly back and forth. The fights involve jumping and dancing in the air, most of the time with the crest raised.

Male and female Hoopoe look pretty similar, except that the female’s body is slightly smaller, and the plumage is less spectacular. 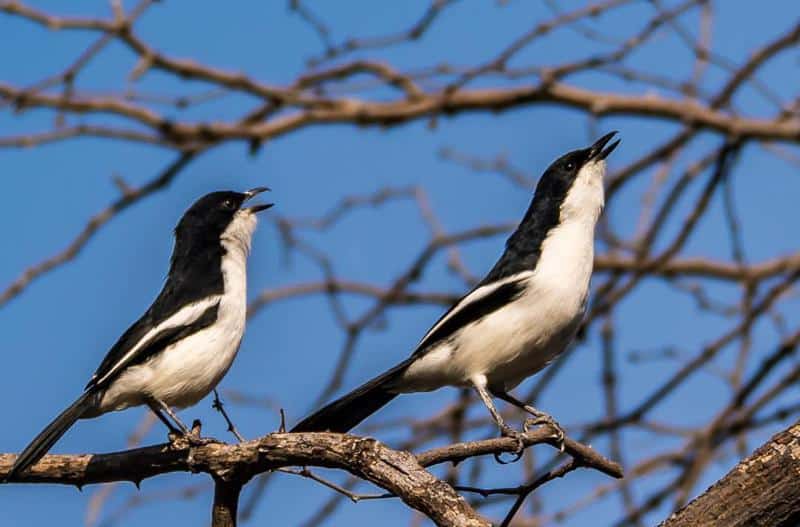 Swamp Boubou (Laniarius bicolor) is a songbird that lives in Northern, western and southern Central Africa, where it lives in river systems or swamps, hence the common name.

Swamp Boubou is a black and white bush bird with purely white underparts, deep blue-black upperparts, and wings that are black with white wing stripes.

Although Swamp Boubous hide most of the time, sometimes they pop out in the open, and they have been observed to be living in pairs.

This species feeds on fruits and insects, seeking them out in the ground, reedbeds, or trees. Rarely it has been observed eating frogs.

For Swamp Boubous, the mating season is almost all year long, with the peak in November.

The nest is a little cup-like knitting of twigs and roots, where two eggs are laid, incubated by both sexes. They sing a duet every time they need to switch.

Apart from a rufous wash on the breast and some dark grey in upper parts, the female Swamp Boubou is similar to the male.

The younglings are similar to female birds but marbled brown in the upper parts, with barred under parts, and a rust-colored wash to the wing stripe. 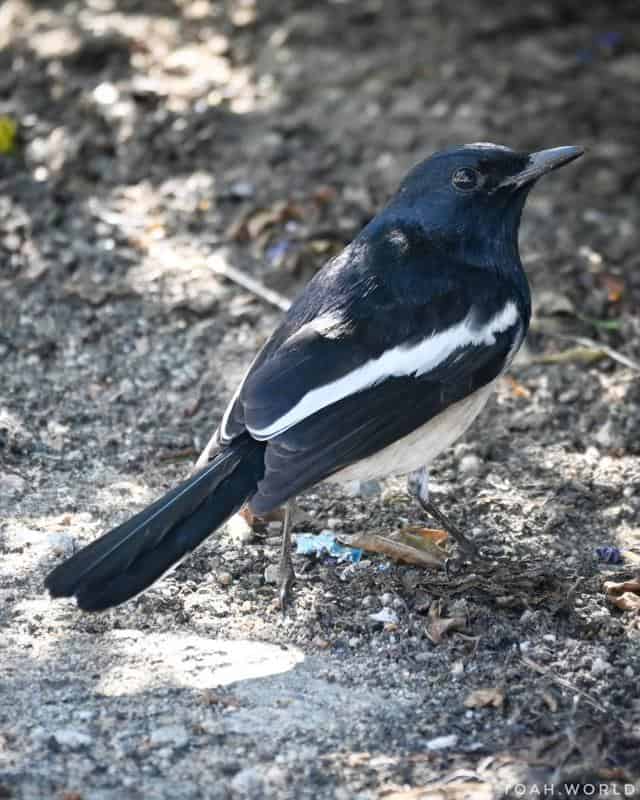 Oriental Magpie-Robin (Copsychus saularis) is a medium-sized songbird with a long tail, black and white plumage, and a white stripe from shoulders to the tip of the wings.

The Oriental Magpie-Robin’s nourishment is based on invertebrates and insects, but it’s not a secret that they also enjoy flowers, nectar, and hunt leeches, lizards, or even fish.

In the breeding ritual (March to July in India and January to June in Southern Asia), the male sings from high positions and woos the female by puffing its feathers, raising the beak, and fanning the tail.

When they don’t “rent” nest boxes, Oriental Magpie-Robins make a nest in tree hollows or cracks of old buildings.

The female is busy building the nest about one week before laying the eggs, while the male, a little aggressive in the mating season, is defending the territory.

The female Oriental Magpie is different from the male in plumage, being greyish-brown and white.

The younglings are similar to females, except they have scaly patterns on the upper parts and head.

With a short tail and long black wings, the Black-and-white Warbler plumage is heavily striped, with two large white stripes that cut the blackness of the wings.

In the summertime, Black-and-white Warblers can be found in mixed and deciduous forests, where they prefer trees of medium age for the variety of food sources they offer.

They can still be found in forests and the margins of woods in the wintertime, just around those from Florida to Columbia.

This species feeds from the trees, crawling up and down logs and branches and hunting insects.

A short while after arriving in the spring, male Black-and-white Warblers establish territories, which they defend against other males with songs and chasing.

A female is expected to cross its breeding territory, and when that happens, the male will engage in efforts to mate, in some cases even showing off by flapping its wings.

Black-and-white Warbler breeds from April to August, laying 4-5 eggs in a cup-like nest made on the ground.

The adult male is striped on the throat and black on cheeks, while females have white-cream throat and sides, with grey cheeks. 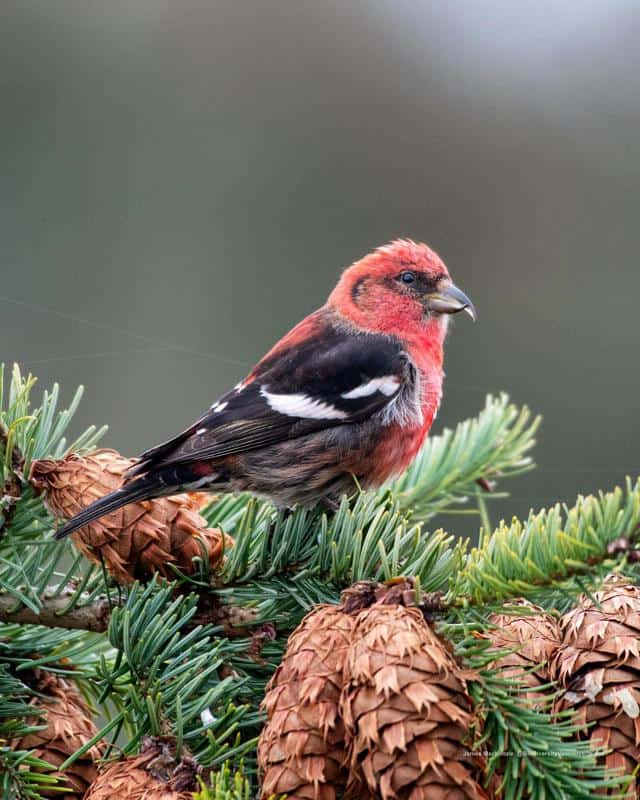 White-winged Crossbill (Loxia leucoptera) is a medium-sized songbird from the finch family, with a crossed beak (hence the name).

White-winged Crossbill male’s plumage is red-pink, with a black tail and wings and two white stripes on the wings.

The female’s plumage is green or yellow, with a black tail and wings, and with the same white stripes on the wings.

They can be found in boreal woods, where they prefer tamarack and spruce, but when the population increase suddenly and or food gets low, they can also be found in hemlock fields, weedy fields, and even visiting birdfeeders.

White-winged Crossbill feeds on seeds collected from pine cones, which it opens with its specially-adapted crossed beak.

When it comes to their preferred diet, White-winged Crossbills like spruce and tamarack seeds, but also eats insects in the summertime.

This species lives in flocks and breeds in coniferous forests, nesting in the trees and laying 3-5 eggs.

The younglings are brownish, striped underneath, with whitish wing stripes like the adults; those stripes distinguish them from other finches. 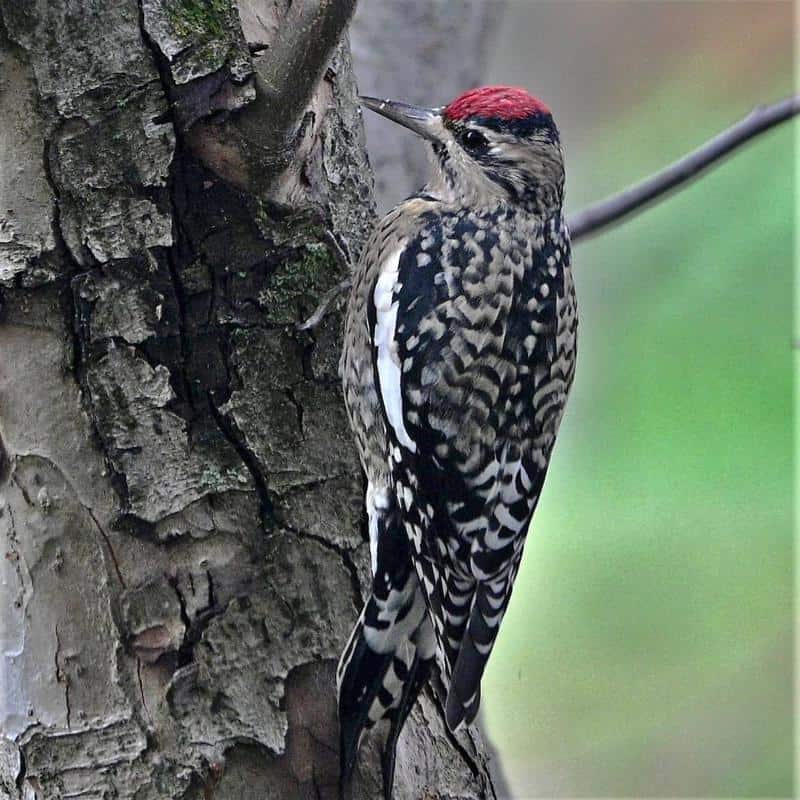 Yellow-bellied Sapsucker (Sphyrapicus varius) is a medium-sized woodpecker with a fierce-looking, straight beak.

Both sexes have a white stripe over the folded wings, a black chest shield, and white or yellowish undersides.

The habitat of Yellow-bellied Sapsucker is forests (hardwood and coniferous, up to 1900 meters altitude), and although it spends winter in the woodlands, it has been seen near bird feeders, searching for food.

Yellow-bellied Sapsucker drills in the tree bark with lines of superficial holes, called sap wells, from which it feeds itself with sap and insects it catches in the process.

In the breeding season, the male Yellow-bellied Sapsucker sings to attract the female into its territory; when male and female meet, they greet each other with short discordant sounds.

A distinction in the Yellow-bellied Sapsucker’s behavior lies in the fact that the bird drums on dead trees. First it was believed that it did this to test the quality of potential nesting locations; later, this has been observed as a long-distance communication technique.

Yellow-bellied Sapsucker nests in pairs, in living trees, in which the male excavates a large cavity, although both sexes form the nest. This species tends to be monogamous.

The younglings plumage has a general tone of dark-olive brown, with pale mottled and blackish uppersides; they have scaly chest, pale yellow in the center of the belly, buff-streaked head, and striped crest.