Try to imagine flamingos – what do you see? Probably a bunch of pink flamingos standing in water, chilling together as they watch the sunset. Well, if this is the first thing that popped into your mind, you’re on point. That is basically what flamingos do and are known for. Rarely do people imagine flamingos soaring into the sky, flying around. Oftentimes, we have a hard time imagining large, tall birds flying, mostly because the majority of them can’t really fly overall.

Chances are that you’re reading this because you were confused by this question as well – Can flamingos fly? To find out, in the following paragraphs we’ll explore flamingos, their flight abilities, flight behavior, and of course, how they manage to fly (if it turns out they can do so indeed). So, without further ado, let’s get right into it!

So, Can Flamingos Fly?

Let’s start right away with a straightforward answer; yes, flamingos can indeed fly. Generally, they do walk around elegantly, parading their breathtaking pink feathers, long necks, and even longer legs. However, they do fly, sometimes even long distances, depending on the wind conditions, and of course, their needs.

Flamingos develop their flying feathers 11 weeks after hatching. That is when they attempt to fly for the first time. However, after 2 to 3 months, flamingos learn how to fly and practice flying to get better.

In order to take off, flamingos have to run on the water. With a single wing beat, especially with stronger winds, they take off rather quickly, keeping their necks and legs completely stretched. To keep flying, flamingos need to continuously beat their wings. However, sometimes they have to compensate wingbeats, so they move the central part of their bodies up and down. This ensures stability as the head and the neck stays fixed during flight.

Generally, flamingos rarely fly alone. They tend to fly in rows, or rather create V positions, similar to geese. This minimizes the energy required for flying and helps maintain the group relation. Using regular vocalizations, flamingos communicate with each other and ensure the formation of the group stay in the V shape. 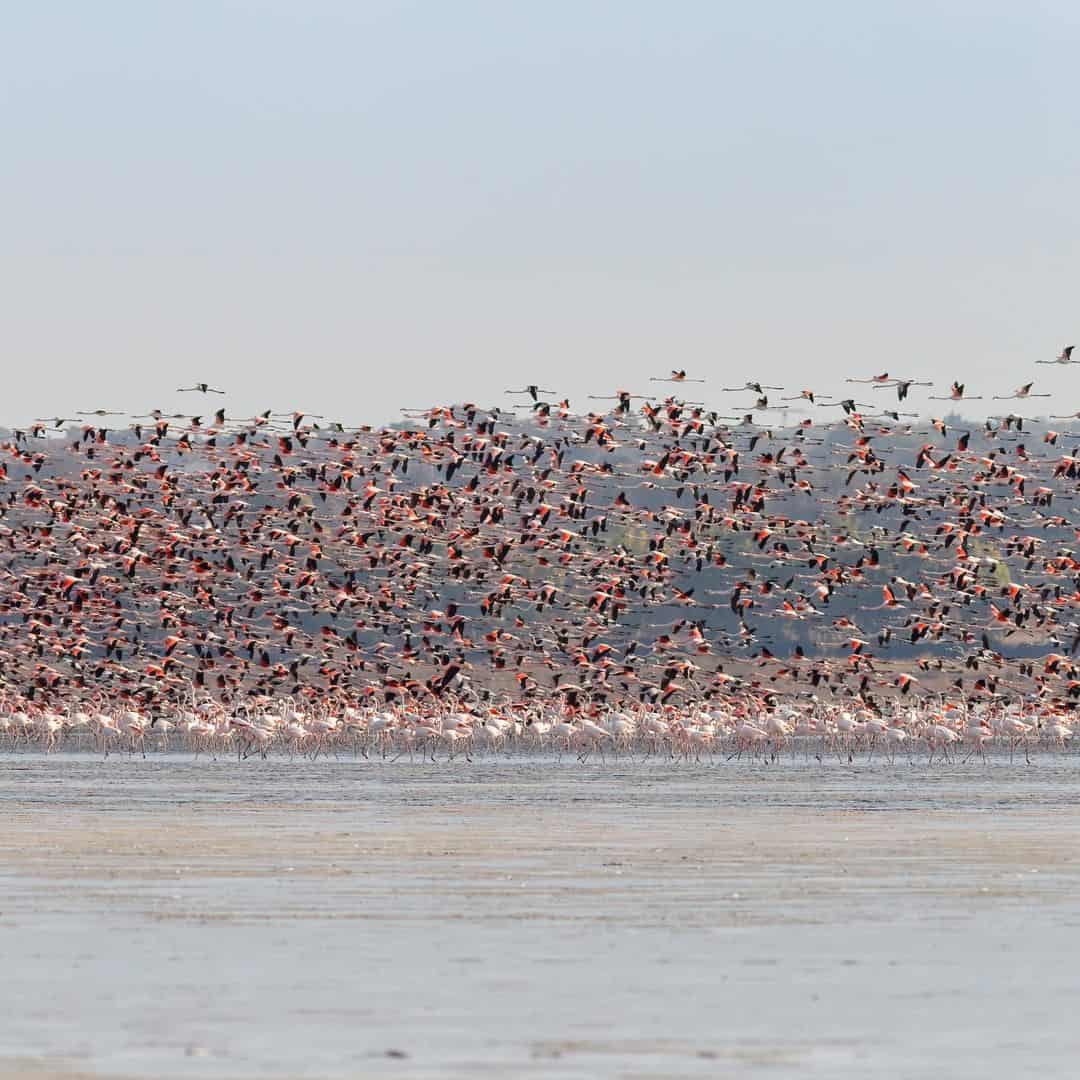 When flying, flamingos can go high, between 10,000 and 15,000 feet, which is between 3 and 5 kilometers into the air. However, this surely depends on the wind. So, if the wind flows directly in front of the flamingos, they tend to fly lower, generally above the water surface where the wind blows lighter and the strength of the wind is minimized.

For example, flamingos on their way between France and the south of the Mediterranean rarely fly higher than 250m. Sometimes they even fly at 50m max. This is because they’re flying in lower regions, mostly over water. However, when flying over the ground, they can reach even more than 15,000 feet, or 5km.

We can say that flamingo flight behavior is often dictated by the weather conditions, wind strength, the direction in which they fly, and of course, whether they’re flying over water or ground. All of these factors affect the altitude at which flamingos fly as well. 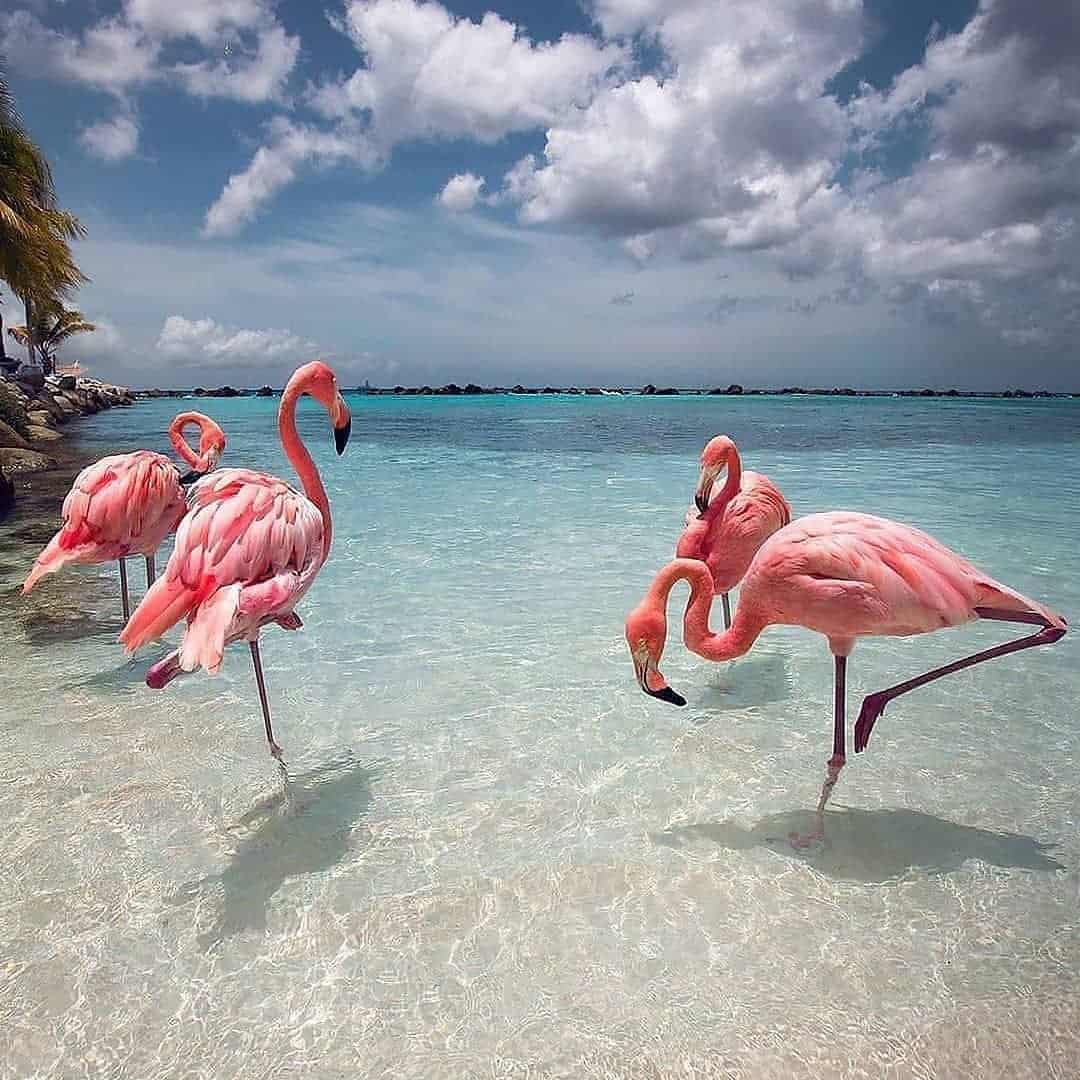 Considering their long legs, one cannot help but wonder how flamingos actually land after flying. Well, flamingos generally slow down their flying speed by pushing their feet down and lifting their necks and heads upward. This ensures an upright position, which further enables them to touch the ground with their feet first. The landing is generally smooth, but the birds do experience an initial landing impact which they mitigate by continuing to walk or pedal (in water) upon landing.

Other Interesting Facts About Flamingos and Flying

For years now, scientists have observed and tracked flamingos during flying adventures. The latest discoveries show flamingos tend to fly long distances mostly at night. Flamingos often start their long-distance adventures at sunset, when one can see them taking off in large numbers, sometimes hundred of flamingos, flying south. The reason for this lies in favorable wind conditions during this part of the day, just before the sunset.

When it comes to the speed of their flight, we can say that flamingos fly between 50 and 60km/h, or between 30 and 40mph. Their flight speed changes depending on the strength of the wind; sometimes the wind can increase their speed up to 30%. For example, when traveling from Camargue (southern France) to Tunisia, it can take flamingos up to 11 hours to reach the final destination with wind support. Without the wind support, the flight can last 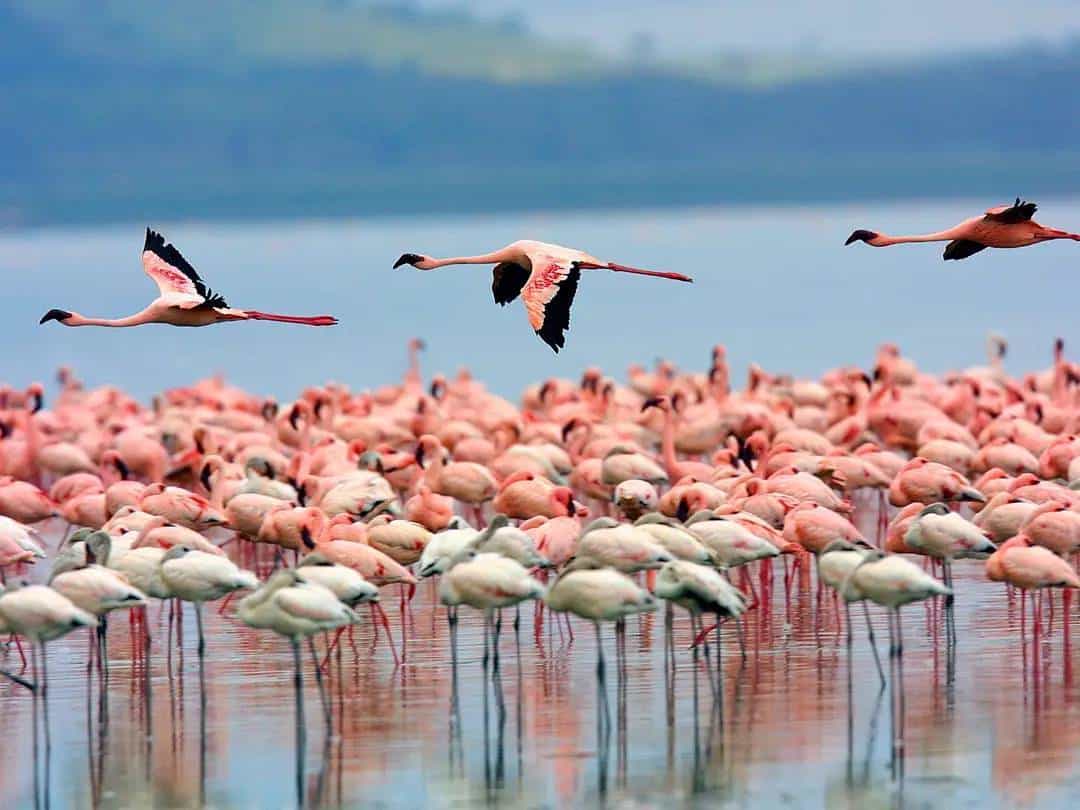 In one night, when it comes to length, flamingos can fly up to 600km, or 375 miles, which is pretty incredible and generally unexpected. Flamingos can also fly up to 450km without ever taking a break or making a stop, which is super impressive. Scientists have tracked one specific flamingo to see how long can it fly without resting. The bird made two long continuous flights; one being 959km, and the other being 1,139km long. The bird rested for only a few hours between the flights.

So, there’s your answer; flamingos can, indeed, fly, high and long, fast and slow. These incredible birds have developed an incredible technique of body alignment to ensure stable flying for a long time, without their long necks or legs coming in the way. Thanks to their incredible flying behavior, flamingos can travel for thousands of miles without taking a break or resting.

In case of strong winds, they can fly fast and reach their final destinations 30% faster than they would without wind support. Hopefully, this article has provided all the information you wanted to know. For a more interesting animal fact, make sure to continue reading and exploring Coachella Valley Preserve.

[…] we tend to focus on animals with bright coloration or striking patterns such as flamingos or peacocks, there are a vast number of animals with a simple black and white palette. There can be […]