One of the most interesting stories in nature is the fact that some birds cannot fly. To us, this could seem like an unfortunate occurrence. Birds have wings for flying and soaring in open skies, so to have wings and not be able to use them feels a little sad.

That is why, when we come across a bird species that cannot fly, we immediately become fascinated by it; the wing, bone structure, feather distribution. From penguins to kiwis, from chickens to ostriches, it is easy to wonder why these poor creatures can’t fly.

Today we will focus on the king of the birds; the peacock. We know for sure that ostriches, penguins, kiwis, and chickens cannot fly, but when it comes to peacocks, people become unsure.

So, before we start, think about this; do you think peacocks can fly? Have you ever seen one fly? In the following article, we’ll talk about this in detail and help you discover whether you’re right or wrong. So, without further ado, let’s get started!

So, Can They Fly? 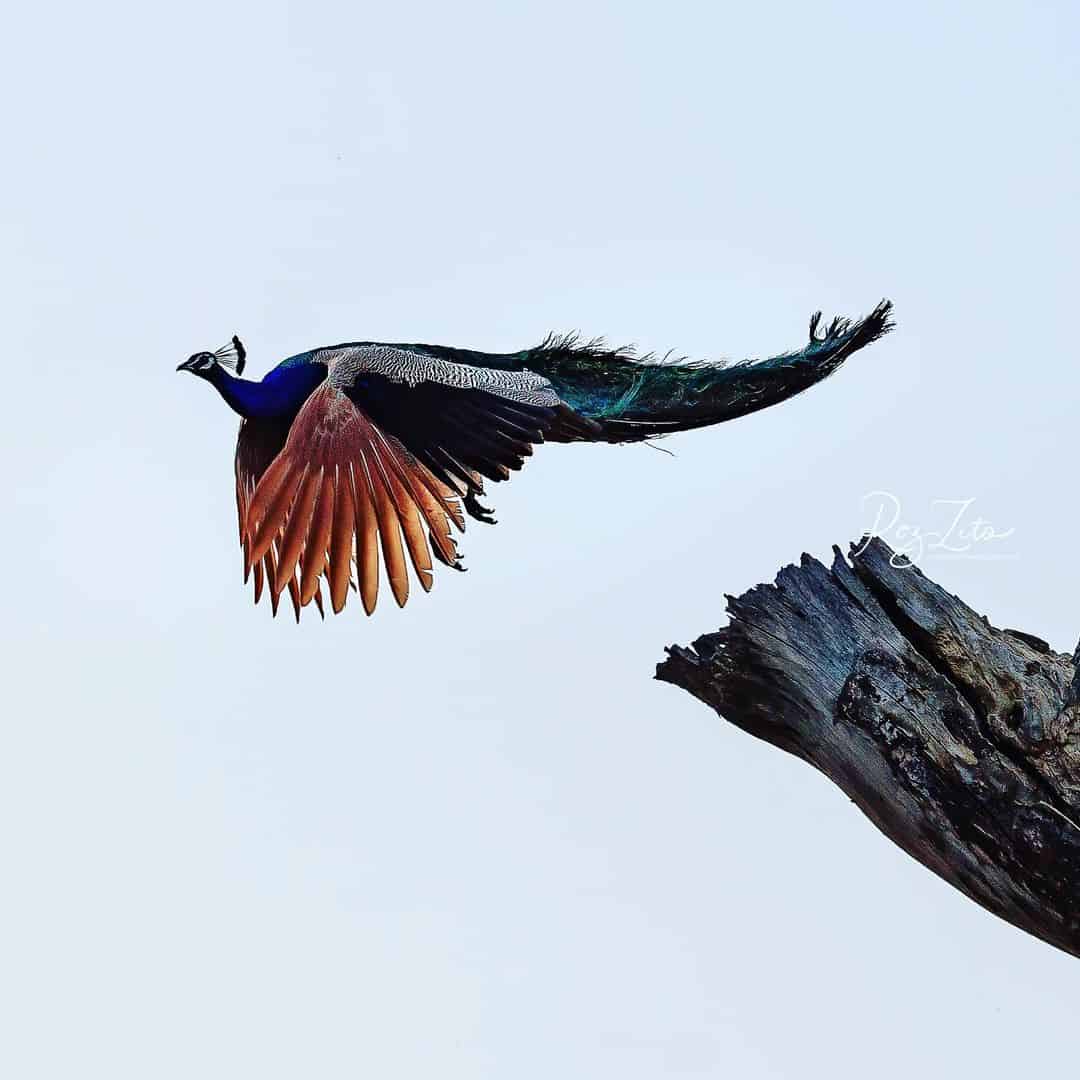 Let’s start with the answer right away. Peacocks, are technically capable of flying. It is common to see a peacock ‘flying’ in the wilderness, usually to hunt and catch prey. However, the catch lies in the fact that peacocks can’t stay in the air for a long time, like other flying birds. At their best, peacocks can fly up to a mile, or 1.6km.

Generally speaking, peacocks won’t fly for any reason other than being faced with danger or hunting for food. They also can only reach heights between 2 and 8 meters, so their flying abilities are used for avoiding ground-level obstaclesand threats. Being able to ‘fly’ briefly is, however, essential for wild peacocks for when they roost or hatch up in the trees.

How Do Peacocks Fly?

It is well known that peacocks have incredibly long tails and wings, so it is easy to assume that flying is a difficult task for peacocks. However, the length of their tails or wings does not hinder their flight. The extremely long tail ensures the bird is completely stable while in the air, even at heights of 8 meters.

The reason the tail ensures such flying strength and stability lies in the feathers covering the tail. Those feathers are generally referred to as flying and tail feathers. While the main purpose of tail feathers is an aesthetic one,  flight feathers ensure the tail provides stability. 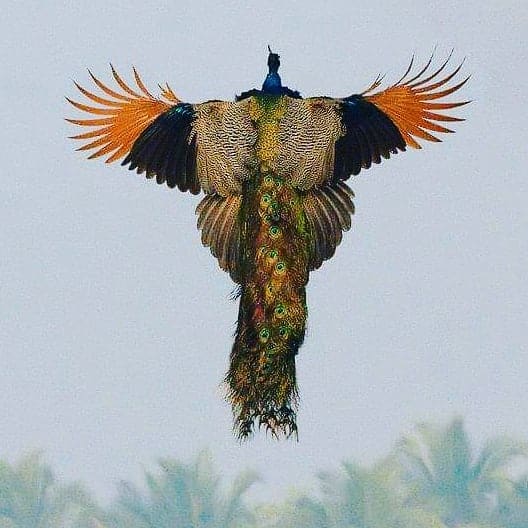 When it comes to the wings, peacocks use them mainly to glide through the air, rather than to flap. When it comes to ‘traditional’ flight, birds are considered to be able to fly if they can stay in the air for a longer, sustained periods.

Instead of excessive flapping, peacocks launch themselves off the ground or a tree, flap one wing against the other, and glide through the air for a limited time. This technique is, for example, used when peacocks ‘fly’ from one tree to the other.

One such purpose for flying to different is to get closer to potential mates. Male peacocks have especially large wings and tails for one reason; to show off the breath-taking feathers to peahens in the hopes of mating. During the mating ritual, peacocks spread their train feathers, sometimes even the wings, and create an incredibly beautiful, big fan that resembles a parachute.

Why You’d Be Right To Say Peacocks Can’t Fly

After we’ve explained the issue about peacocks ‘flying’, we could conclude that saying ‘peacocks can fly’ would be a technically correct statement, despite them mainly gliding through the air, rather than flying.

But, what if we told you that saying “peacocks can’t fly” would be an accurate statement too?

Hollow bones are what enable birds to stay in the air for longer periods of time. This attribute also allows them to fly faster or slower, aggressively while hunting, or elegantly while enjoying a breezy, summer day. 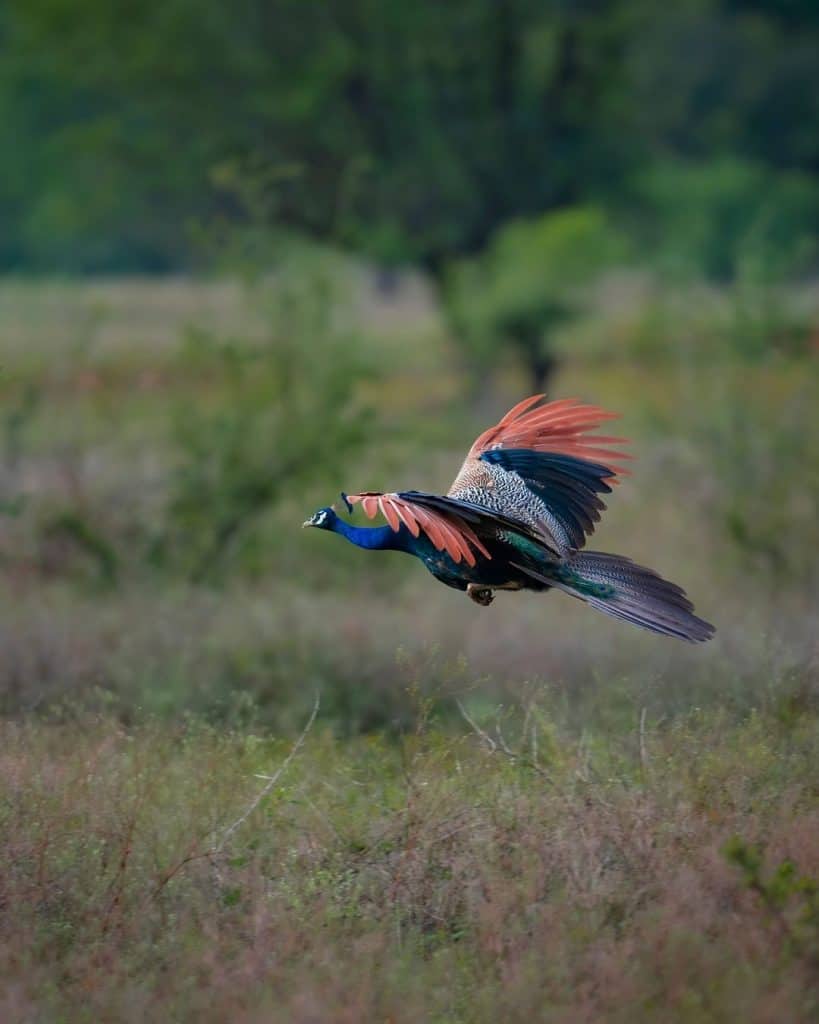 Peacocks do not actually have hollow bones but denser, more solid bones. Generally speaking, flightless birds don’t have hollow bones. Penguins, ostriches, emus, kiwis, and similar birds, all have denser, solid bones which prevent them from flying. Bones in flying birds are filled with air pockets, which makes them almost weightless in the air.

It is also essential to take a look at a peacock’s body. Considering how flying birds look, we’d say they have a rather pointed body, with a small, narrow chest. Flying birds have aerodynamic bodies that enable them to fly and stay in the air. Considering the way peacocks look, we can say that their bodies are far from being aerodynamic. The wide chest and all the muscles in the front of the body make them look heavy.

Now, because of the solid bones and overall size, peacocks are truly too heavy for actual flight. The large feathers also add to the overall weight of the bird, meaning these birds are only able to jump high and stay in the air for a limited time.

Peacocks and Flying in Captivity 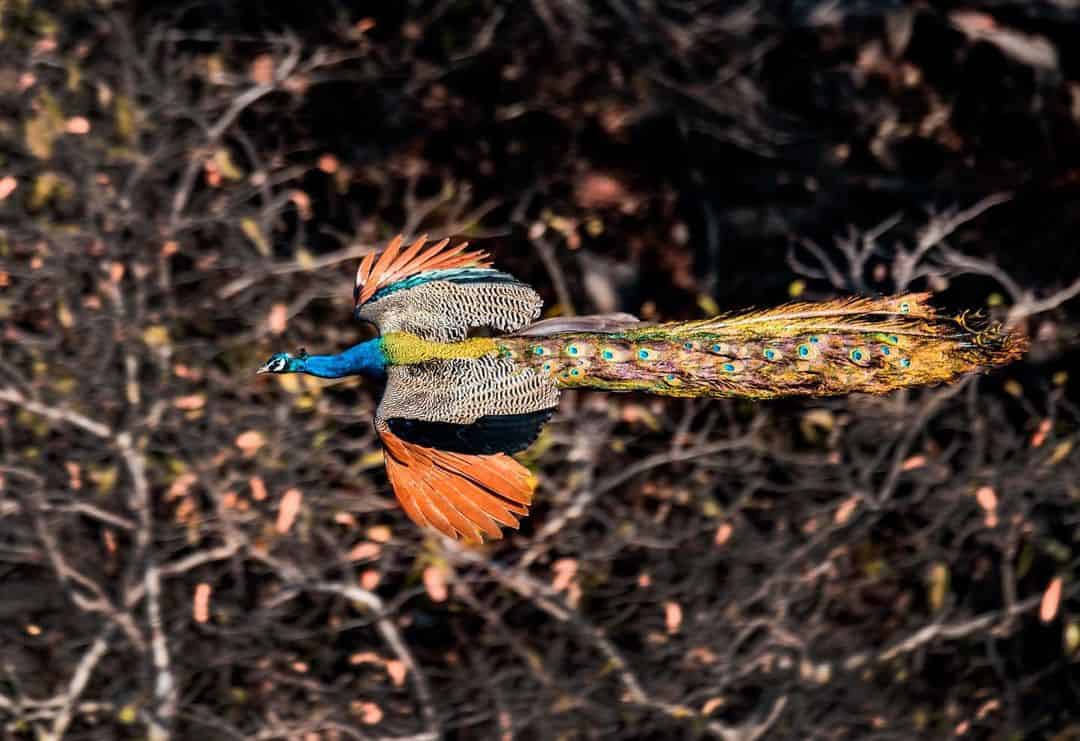 Up until now we’ve only talked about peacocks flying in the wild. But, considering the number of peacocks kept in commercial and domestic settings, do peacocks ever fly in captivity?  Peacocks mainly ‘fly’ in order to overcome an obstacle or find food. Since there is no need for such an activity in captivity, domestic peacocks never fly.

In fact, even if they wanted to fly, they wouldn’t be able to. Often, peacock breeders have the wings clipped to avoid the birds escaping. Without properly functioning wings, peacocks cannot get over fences.

Wing clipping is an incredibly inhumane thing to do. Birds used for circuses and similar performance generally go through wing clipping too, for example.

Can Peacocks Be Trained To Fly?

Peacocks, thanks to their dense bones and heavy, abundant feathers, cannot fly in the true sense of that activity, nor can they be trained to do so. Flying as such is out of the reach for these incredible birds. Breeders, even if they wanted to train peacocks to fly, wouldn’t be able because these birds are not built for it.

We hope that this brief insight into the subject of peacock flight has finally provided the answer to a confusing question. There is a clear distinction between birds being able to fly and birds being able to jump and glide through the air for a limited time and length. As incredible and majestic as it would be to see peacocks fly around, it is simply not possible thanks to their non-aerodynamic body, and heavy bones and feathers.

The author of this post has undoubtedly done a great job by shaping this article on such an uncommon yet untouched topic. There are not many posts to be seen on this topic and hence whenever I came across this one, I didn’t think twice before reading it. The language of this post is extremely clear and easy to understand and this is possibly the USP of this post. https://thestudycafe.com/can-peacocks-fly/