Although bears belong to the carnivoran order, they are categorized as caniforms meaning dog-alike carnivorans.

(We talked about a dog’s omnivorous nature and why it is classified as “omnivorous with a carnivorous predisposition” in another article – see “Can Ducks Eat Dog Food?”).

When we think about the “omnivorous with a carnivorous predisposition” nature of a bear, its stereotypically ‘lazy’ character and opportunistic hunting style, compared to the velocity and agility of deer, it becomes difficult to believe a bear could successfully hunt and catch a deer.

This impression is pretty close to the truth: healthy, adult deer are not usually on the main menu of the bears they share a habitat with.

In this article, I invite you to find out which bears, in which circumstances may eat deer, and what kind of deer they eat. But first, let’s take a brief look at both animals…

A Few Words About Deer

These innocent-looking herbivores are hoofed mammals with long and strong legs, long ears, tiny tails, and antlers (only possessed by the males of most species), making them excellent runners and possibly dangerous adversaries in a fight.

The body size differs from one species to another, the largest is the moose (up to 2.6 meters and up to 800 kilograms) and the smallest is the northern pudu (maximum 32-35 centimeters and 6 kilograms).

Deer live in various habitats, generally preferring the midway regions between forests and bushy areas, or the open areas of savanna and prairie, as they offer more camouflage possibilities.

In addition to their speed and agility, deer also possess excellent jumping and swimming abilities. They have a layer of tissue in the eyes that gives them a decent level of night vision.

Considering this, deer seem to be way too challenging for a bear to catch as prey, and yet…

The bear is an intelligent animal that feeds efficiently. It will estimate whether catching prey is worth its effort, with an aim to save as much energy as possible in the process.

A bear can recognise whether a prey item has possible advantages over it. Therefore, bears won’t usually risk hunting a healthy, adult deer because they would be able to outrun a pursuing bear.

To hunt a deer involves the bear engaging in a long and tiresome chase that usually leaves the bear drained of energy and without a meal.

So, to have the slightest chance to catch a deer, the bear must take it by surprise (while sleeping, for example) or have the luck to catch the deer in a suffering from injury or sickness, or old age.

Therefore, if a bear must hunt (in cases of extreme hunger or while rising baby bears), it will target the weakest deer in the group to increase its chances of success.

The amount of time a bear will spend hunting depends on the season, the other food sources available in the habitat, and the bear species. The Grizzly bear, for example, is the top predator of its habitat, consuming up to 40 kilograms of food daily!

As discussed, the bear will go after the most vulnerable member of the deers’ group or take a sleeping individual by surprise: it will grasp its prey with its big jaws by the back or neck, aiming to break the deer’s spine. If the deer is awake, the bear will strike it with the swipe of a paw to knock it down.

Another tactic of the bear is grasping the deer by the snout, leaving big visible canine marks of 45-65 millimeters between them.[1]

After the deer is dead, the bear will start eating it from the torso or hindquarters, aiming first for the guts, as they are the most nutritious part.

Nothing is wasted: bears are known to preserve extra food by covering it in leaves and moss, hiding it in the snow, or conserving it in running water.

These kinds of supplies offer the bear the possibility of snacking when required, and as an important resource when they emerge from hibernation.

Of course, as an opportunistic hunter, the bear will leave hunting as a last resort, preferring to forage or hunt for a variety of other food: roots, leaves, grass, flowers, larvae, moths, insects, and other animals.

However, we must keep in mind that there are 8 species of bear, and the menu varies from one species to another: some bears feed on insects and flowers (90% of their menu), and others feed on dead animals’ flesh.

So, what’s the perfect deer for a bear?

One that is already dead.

Predominantly bears will prefer a corpse – the carcass of a dead deer or other animal. This is why they are also considered scavengers.

In cold climates, bears need to fatten themselves in autumn to survive hibernation. Therefore, the animal has an extraordinary appetite and overeats, a behavior called “hyperphagia”.

When the bear comes out of hibernation, the food supply is usually low, so it will start searching for deer that have been killed during winter, or uncover the carcasses it hid in the autumn.

The presence of a bear around the carcass of a deer is obvious: chewed small trees or chewed branches, feces, places where it has taken a siesta, and crushed anthills are evidence of a bear claiming its prey.

Baby deer, also known as fawns, are some of the most vulnerable members of a deer group, especially when they are sleeping.

Pretty often, a bear will attack a hidden, sleeping fawn while the mother deer is foraging elsewhere. Fawns are defenseless; the bear either stumbles on the fawns or watches and waits for the adult deer to leave.

So, is a possibility presents itself, bears will kill and eat fawns, elk calves, and other hooved animals’ babies (depending on the bear’s species, time of the year, other food options, and so on).

Bear feces analyses show plenty of deer meat present in a bear’s diet, particularly meat from fawns, as they are easier to catch.[2]

Depending on the species’ feeding habits, food supply, and season, some bears will hunt and eat deer (and fawns), while others would not consider wasting their energy on this endeavour.

Let’s see which one has a greater predisposition to attack, kill, and eat deer. 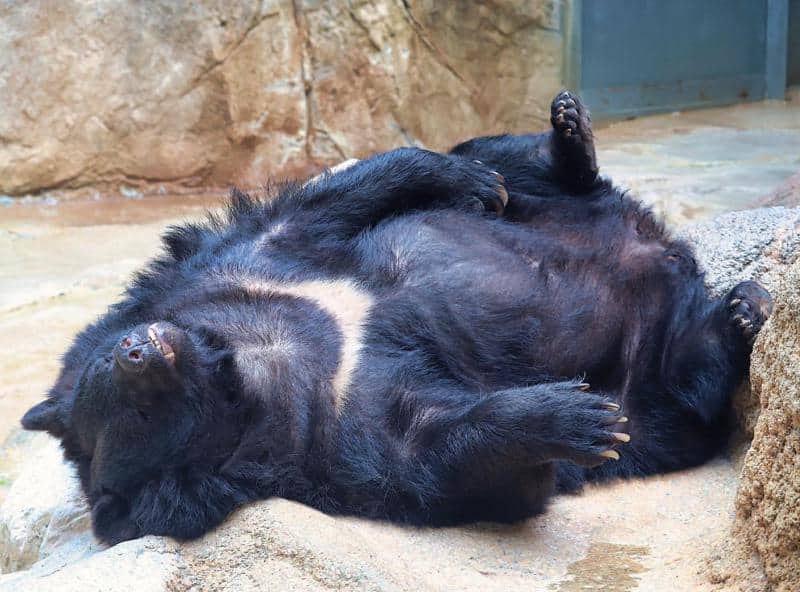 The Asian Black Bear has an extensice vegetarian menu, adapting its appetite according to the seasons: pine nuts, acorns, hazelnuts or larvae in April and May, fruits and greenery in June, and grapes, bird cherries, vines, and pine cones from July to September.

Nonetheless, the Asian Black bear is one of the bear species with the most ferocious carnivorous habits, hunting wild pigs, buffalos, and a wide variety of hooved large mammals (deer included). 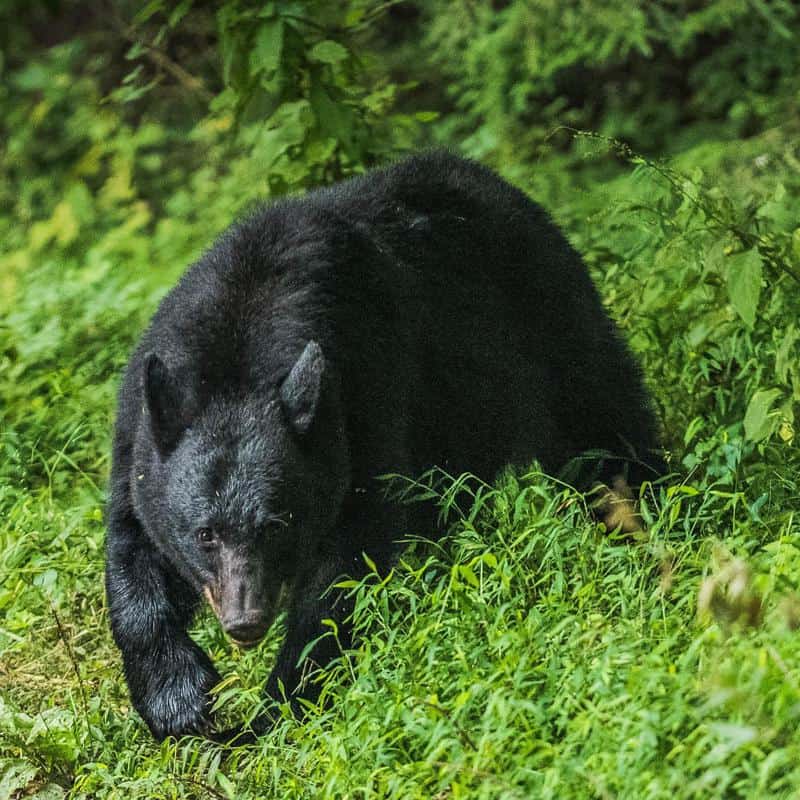 Although they needs to consume a vast amount  to satisfy hunger, the American Black bear’s favorite meal is grubs and berries (when available).

Since the habitat impacts its diet, the American Black bear has adapted to consume roots, greenery, juicy leaves, insects, fish, and, of course, meat.

This species has the strength and skill to take down large adult mammals (such as elk, moose, or deer), although they will prefer to go after young animals, as they are easier to catch. 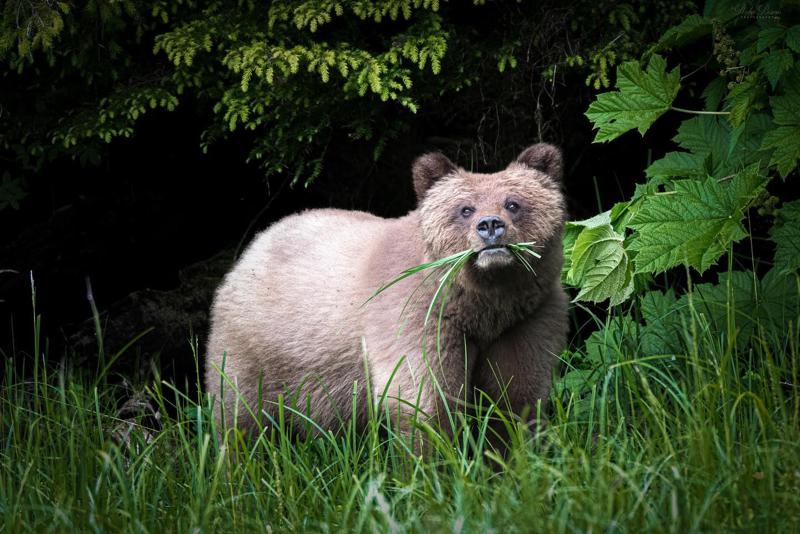 The Brown bear has the widest variety of nourishment of all bears. They are not that carnivorous despite the image we have of them.

A Brown bear’s vegetation diet includes greenery,  berries, mushrooms, moss, flowers, and roots. The primary protein source of the Brown bear is fish, with the salmon being its favorite, and the trout its second favorite.

However, do not underestimate the Brown bear’s capacity to kill and eat larger animals, such as beavers, deers, and caribous; after all, the famous, ferocious Grizzly bear is a Brown bear. 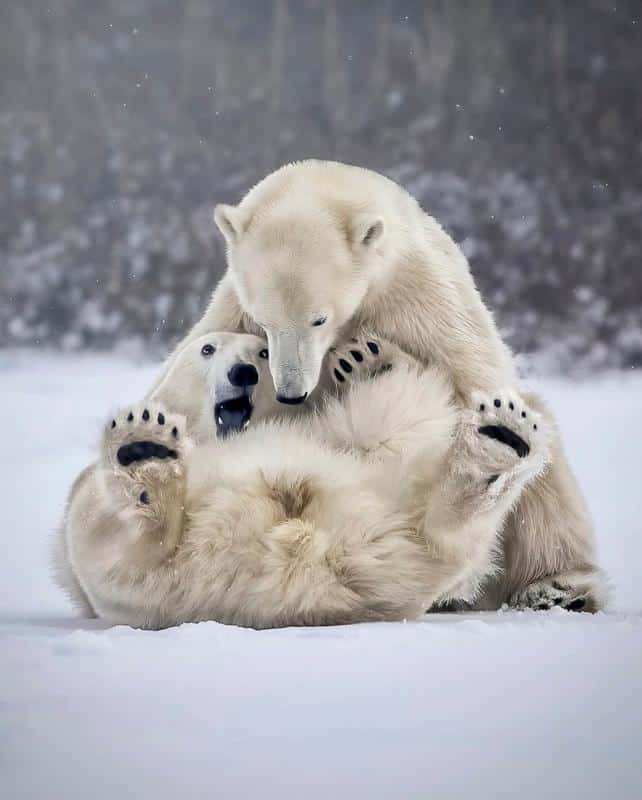 The Polar bear feeds mainly on seals, taking advantage of the periods when seals are abundant.

When seals are not plentiful, Polar bears also feed on smaller prey (such as rodents, birds, or crabs) or larger land mammals (such as walrus, musk ox, and reindeer). 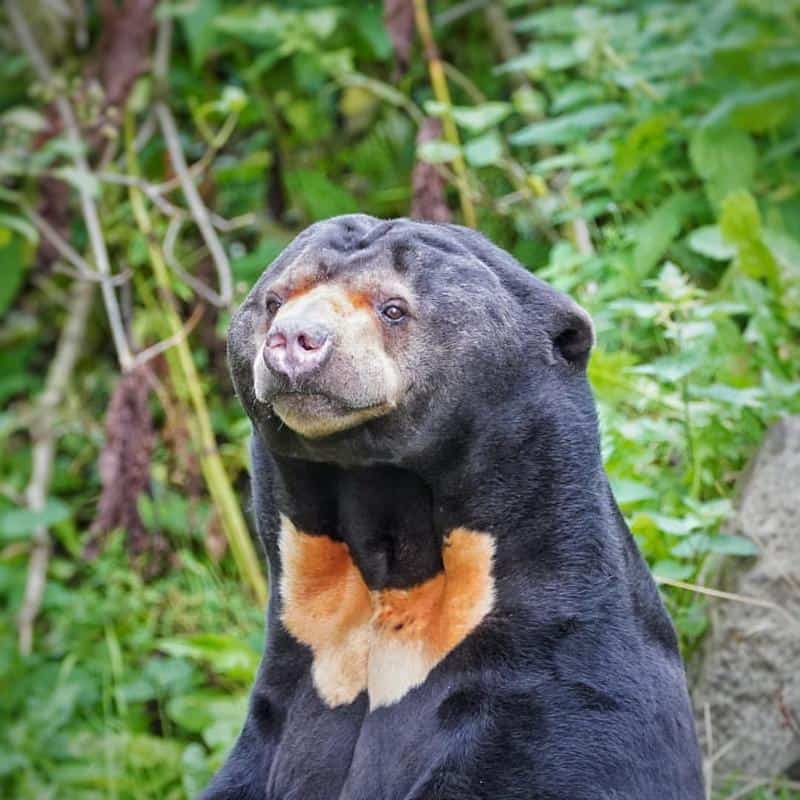 Like other bears, Sun bears also have a wide variety of food, but a little different than what we’ve seen so far…

There are subspecies of Sun bears which eat eggs, birds (like Argus pheasants), reptiles, snakes, anteaters, monkeys, and mouse deer. 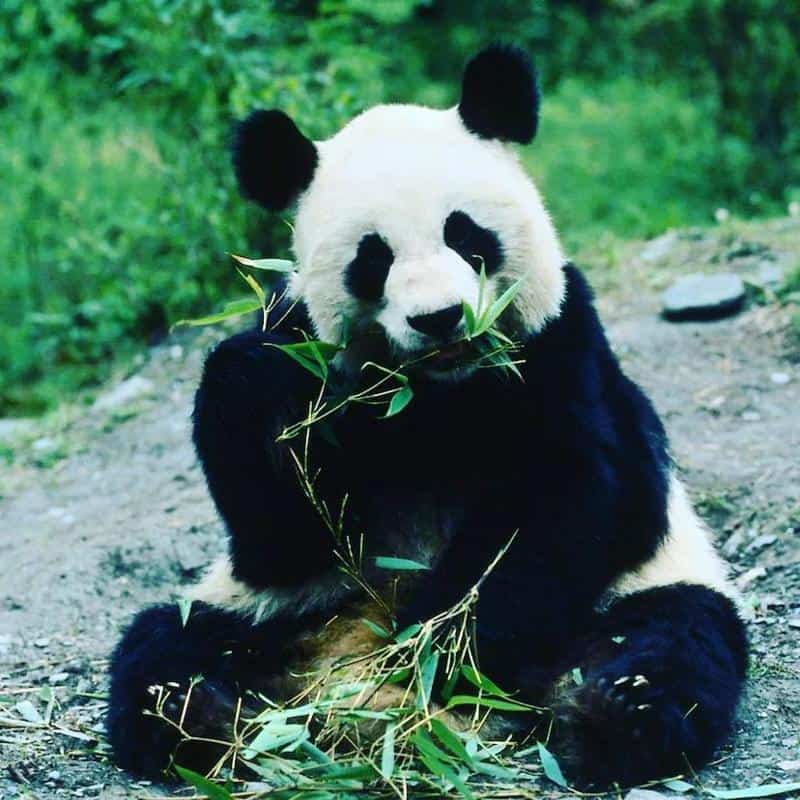 The Panda bear is a herbivore specialized in eating leaves (making it a folivore). Around 99% of its nourishment consists of bamboo sprouts and leaves.

The rest of its diet is covered by tubers and grasses and occasionally meat (birds, rodents, or carrion).

In this case, we can say that a Panda bear would eat a deer if it finds it dead, but the possibility for a deer to be attacked by a Panda bear is almost non-existent. 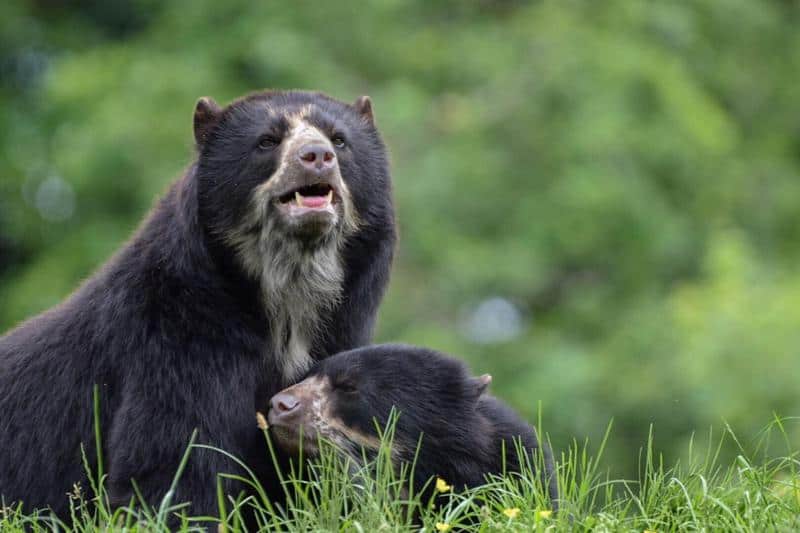 Only 5-7% percent of the Andean bear’s nourishment is flesh. Otherwise it enjoys palm leaves, flowers (especially bromeliads), and fruits. It will also eat orchid bulbs during lean periods.

Although it could hunt other animals, the Andean bear prefers to scavenge for a more accessible food supply; thus, the chance for a deer to be attacked by an Andean bear is very small. 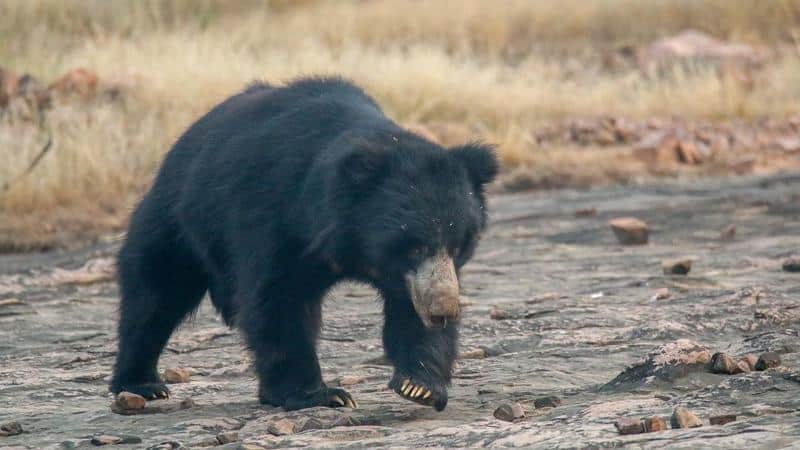 The Sloth bear has nothing to do with hunting or eating mammals, its main dish being insects (termites, bugs, larvae), supplemented with fresh fruits and flowers in the monsoon season.[3]

Bears come in different species and sizes, and they have a wide variety of nourishment that they can consume.

When it comes to meat, bears prefer to eat deer carrion over actively hunting for live deer.

The bear is an opportunistic, intelligent hunter, seeking to conserve as much energy as possible when finding or catching its food.

5 out of 8 species of bear would hunt, kill, and eat a deer, although they would all prefer to find them already dead.

In the rare cases when they must actively hunt a deer, the bears will aim for the weakest members of the groups: fawns, and the sick, or old deer.

Bears prefer to prey upon sleeping fawns while the adult deer are away foraging for food, leaving the baby deer hidden but defenseless.