It wouldn’t be fair to talk about alternatives to peonies without giving a bit of our attention to the peonies themselves.

The name of Peony comes from Paeon (also written Paean), who was a student of Asclepius, the Greek god of medicine and healing.

Zeus transformed Paeon into a peony flower to save him from the wrath of Asclepius, who became jealous of his student.

Peony is a flowering plant with about thirty-three known species, original to Asia, Europe, and Western North America.

The peonies ’ colors vary from pink, purple, and red to white and yellow, and they are considered the most popular garden plants.

Besides the ornamental purposes for gardens and homes, peonies have been used in alternative medicine (their roots were used for convulsions treatment) or as tea-time delicacy (fallen petals parboiled and sweetened). 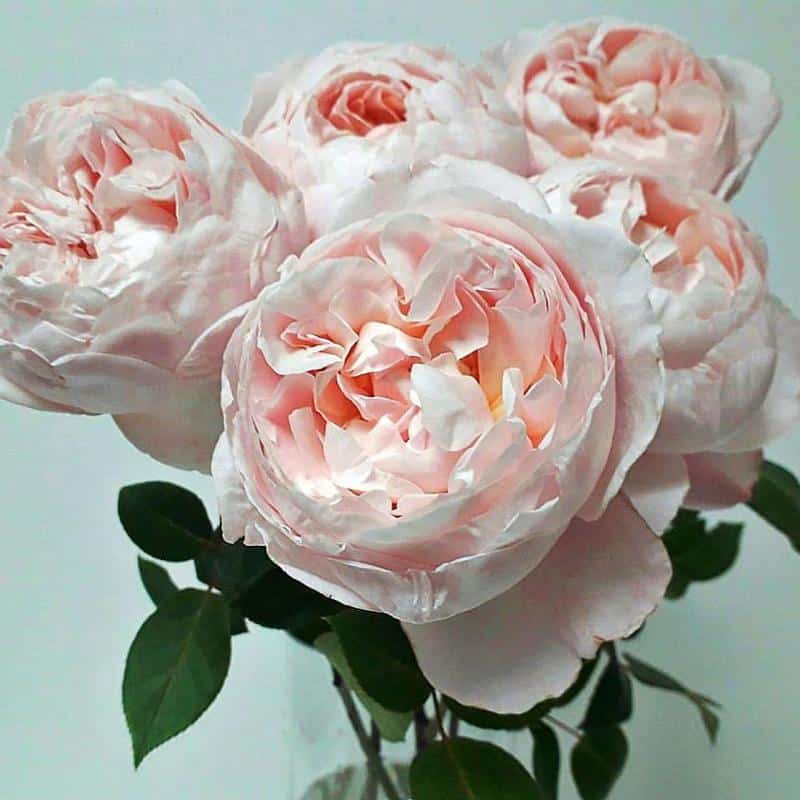 Peony Rose (Paeonia Lactifora Hybridis) is a woody bush blooming in middle spring and lasts through summer for some varieties.

The flowers have a life to the vase of over one week, come with petals of white, pink, and red specters, and they are 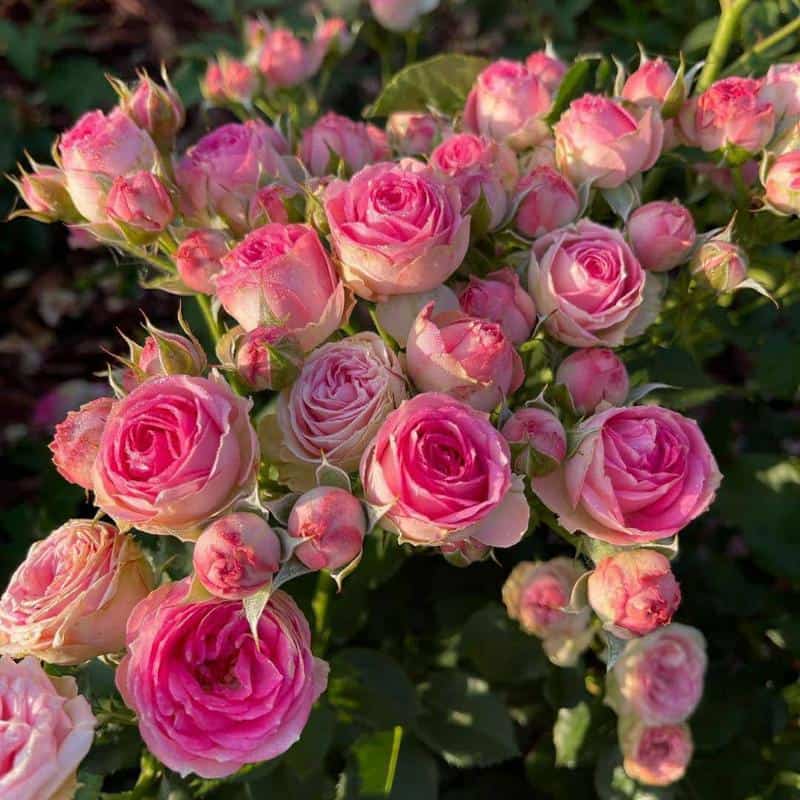 The newer breeds have white and pale pink flowers, while older species have carmine-pink in the core and cream or ivory outside. 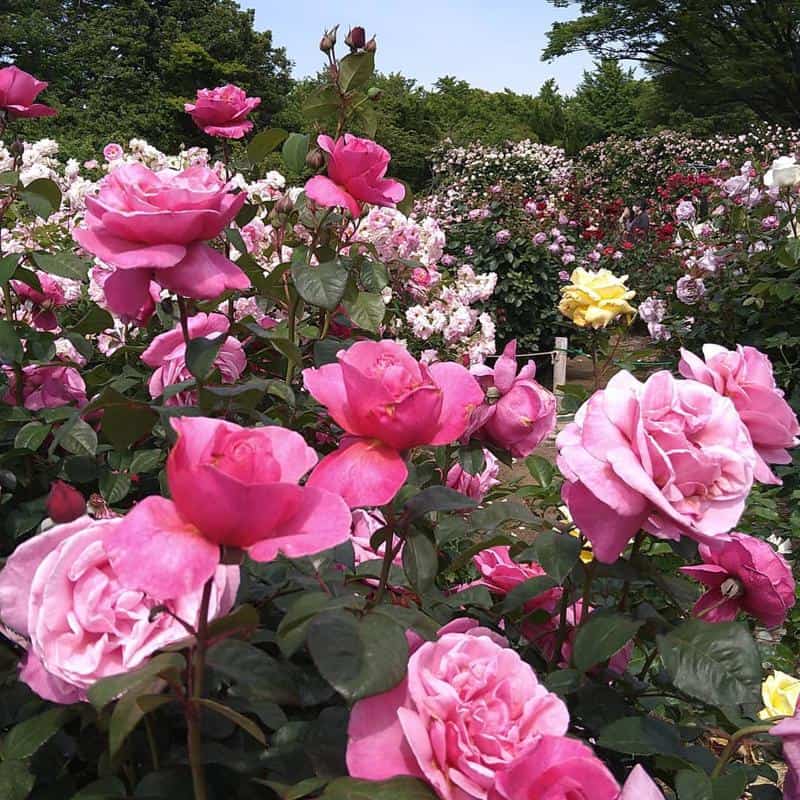 May Rose (Rosa X Centifolia), also known as Provence Rose and Cabbage Rose, is a hybrid made by Dutch breeders around the seventeenth century, maybe earlier.

The May Rose is a bush with round bulbous flowers with numerous layers of petals, usually pink (rarely white, dark red, or purple), very similar to peonies.

The May Rose is typical of the world’s perfume capital, Grasse (France), and it is widely cultivated for its unique, clear, and sweet fragrance, with soft shades of honey. 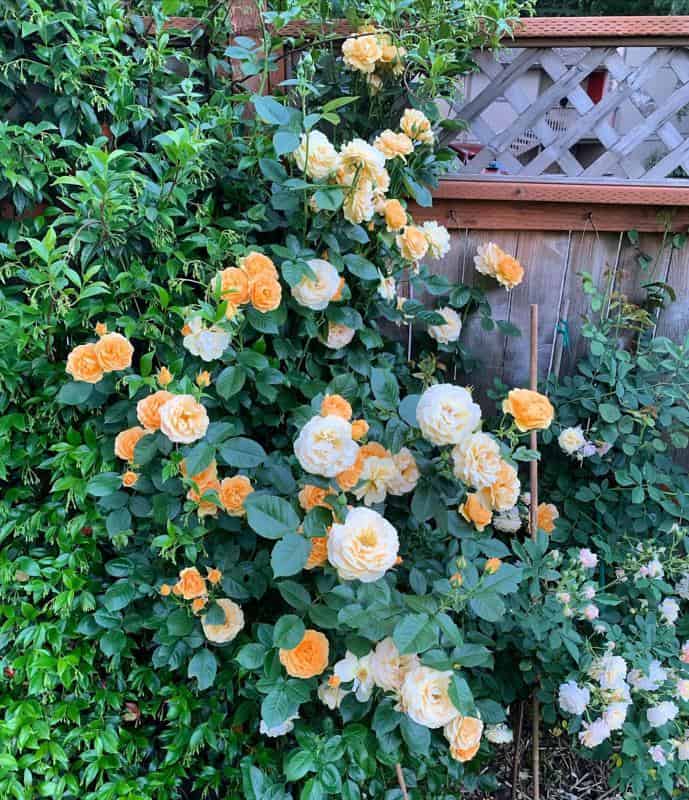 The flower was bred in 2004 and named after Julia Child, a chef famous for introducing French cuisine to Americans.

Julia Child Rose repeatedly blooms in bunches from late spring to fall, and it is loved for its classic shape and sweet licorice scent.

The shape can be maintained with minimal trim, Julia Child Rose being amongst the plants that produce more flowers if the past blooms are cut off. 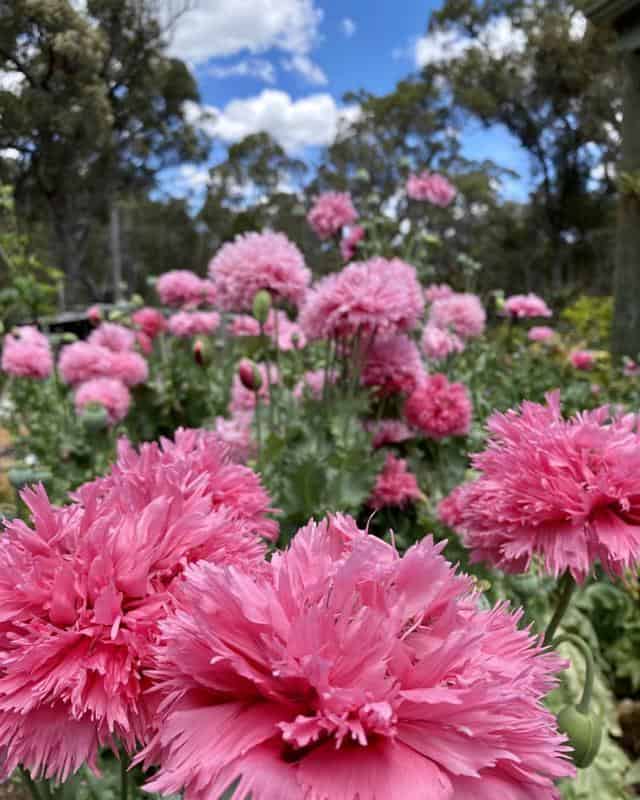 The similarity between the flowers of this Poppy species and Peonies flowers is so strident that they named them by adding together the names of the two flowers: Peony Poppys  (Somniferum paeoniflorum, by its Latin scientific name).

Since Peonies Poppys seem to need cold to germinate if you want to have them beautifying your garden, sow them late in the winter or very early in the spring.

If you cut off the past bloom just above the first set of tiny leaves from the top, a new Peony Poppy flower will blossom; in some cases, you can see the developing flower buds forming between leaves and stem. 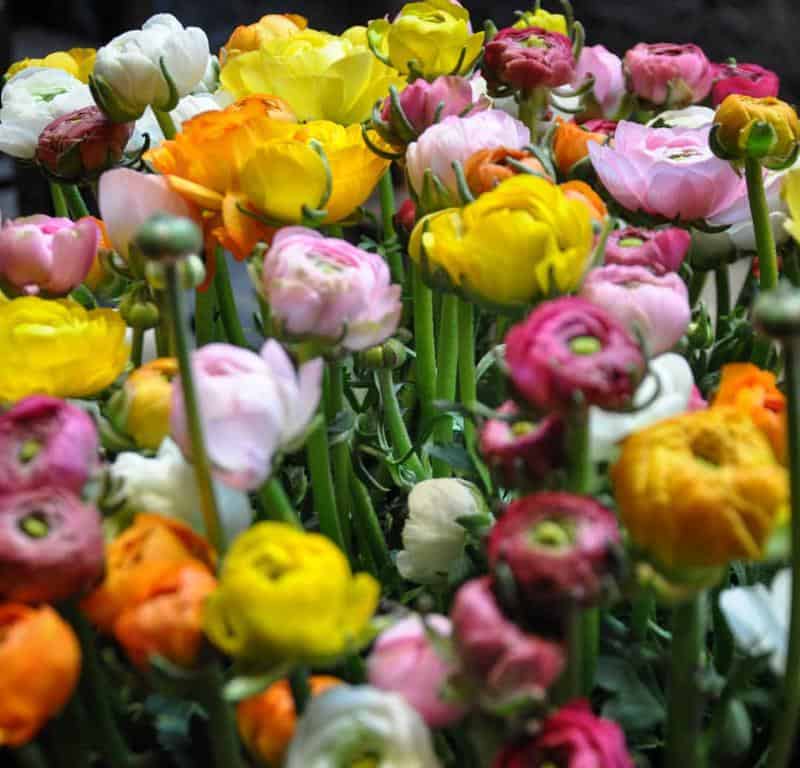 Another adored flower that looks like a peony is the Persian Buttercup (Ranunculus asiaticus), and the similarity with our “star” today is not the only quality it has.

Although the Persian Buttercup has a pretty long vase life of seven days, cut them when the flowers are still in the bud stages if you want to enjoy your bouquet longer. 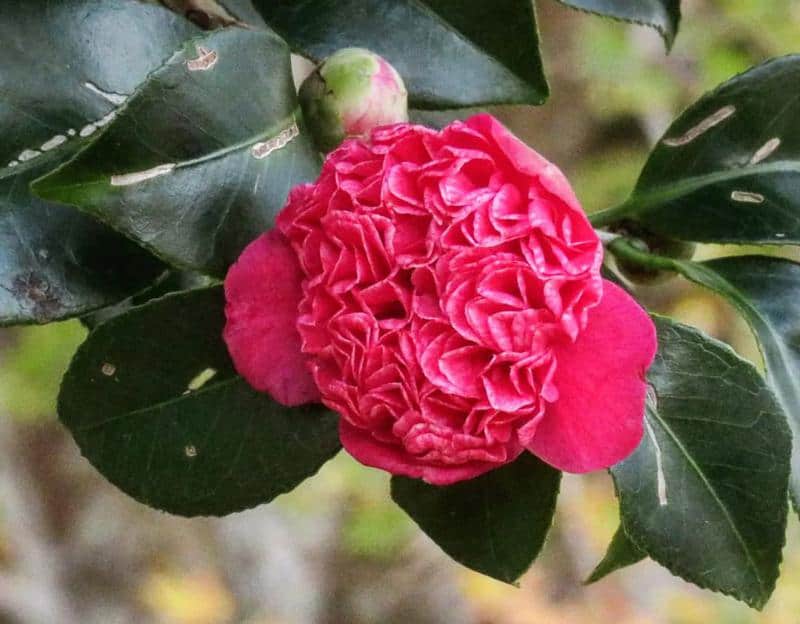 Camelia Japonica is the most predominant species of camellias (of a total of about 250), with the most significant number of camellias varieties.

Camellia Japonica grows in trees or shrubs and comes in different sizes and shapes, colored with delicate white, pale pink, and intense red.

The blooming period of Camellia Japonica is between January and March in an extensive collection of forms: single, double, semi-double, formal-double, and fully peony form.

Besides the ornamental beauty, the Camellia Japonia’s processed leaves have caffeine and intense perfume, making it an appreciated tea. [1] 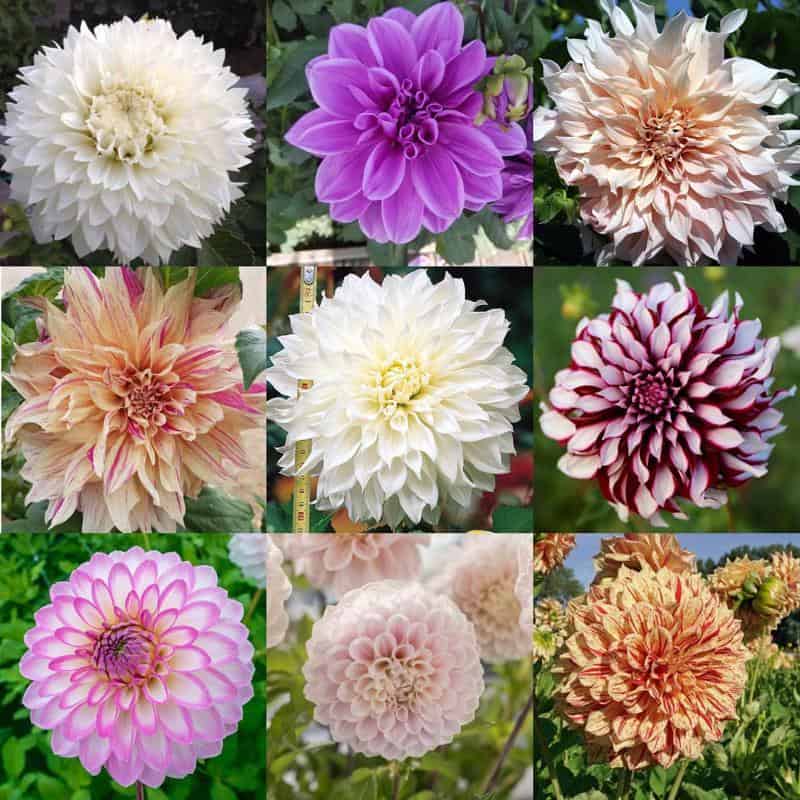 Dahlia is a bushy tuberous flower of various forms, related to the sunflower, chrysanthemum, zinnia, and daisy.

Despite what the appearance leads us to believe, Dahlia has a composite flower head, with central disk florets and surrounding rays florets, different from peony, which has one flower.

However, several categories of Dahlias are very similar to peonies, regardless of the botanic differences.

The most similar Dahlias to Peonies are the Peony-Flowered Dahlias, with its garden variety Bishop of Llandaff.

The next closest to Peonies is Anemone-Flowered Dahlias, a composite of dense, elongated florets that resemble the peonies.

There are two more categories of Dahlias with a similar look to Peonies, Ball Dahlias and Pompon Dahlias, but the distance from which they resemble Peonies is a bit further. 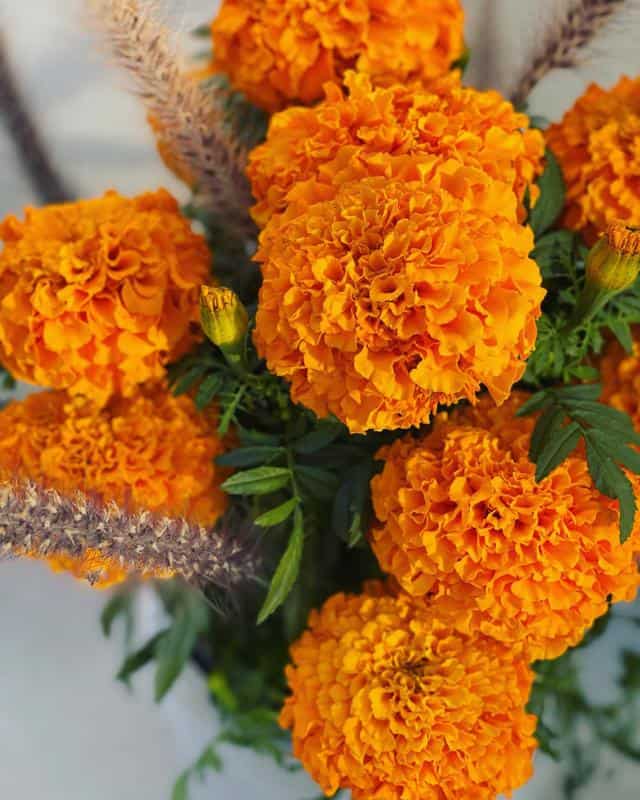 Marigolds (Tagetes) are herbaceous plants from the sunflower family, with a strong, musky scent and some scentless bred varieties.

Like Dahlias, the Marigold flowers are a composite of disk florets and ray florets, coming in various colors, from golden, orange, and yellow, to different shades of white and marron. 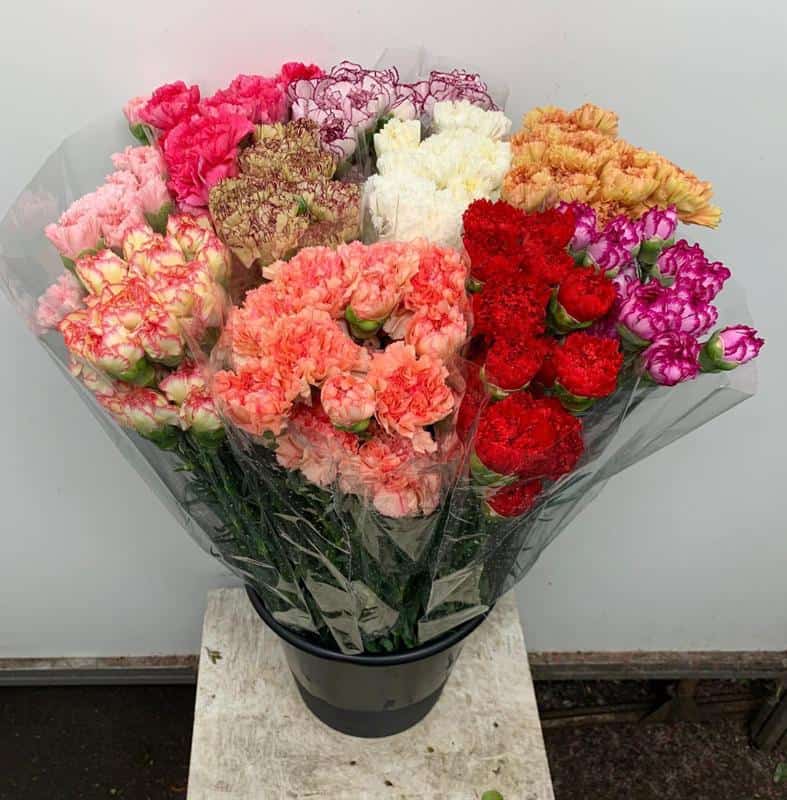 This royal flower Carnation has been so cultivated in the last two thousand years that its origin has been lost; however, some botanists speculate that the flower may be native to the Mediterranean area.

The species of miniature Carnations that look similar to Peonies, although dwarf-flowered, are Double Bubble Carnation and Rosy Cheeks Carnation.[3] 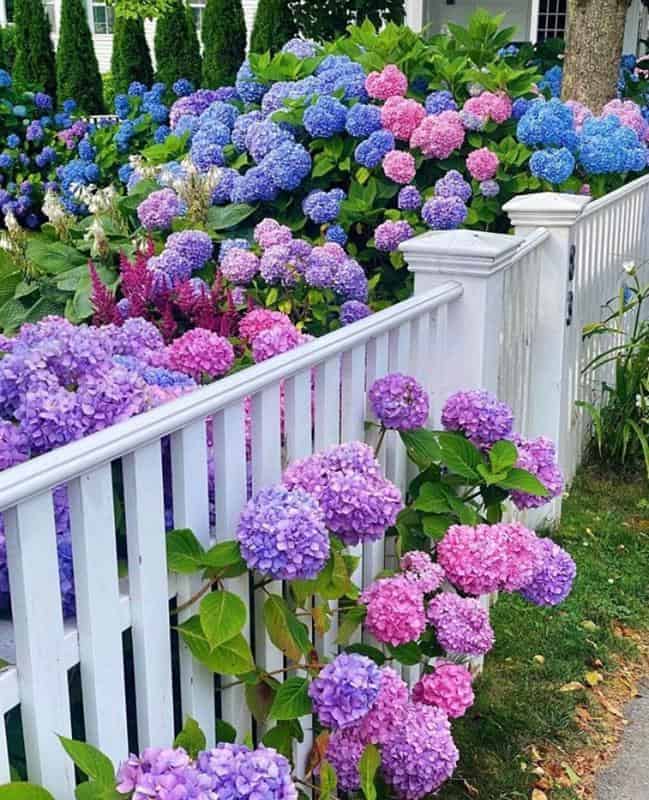 Hortensia (Hydrangea) is a genus of over seventy-five types of flowering plants mainly growing in shrubs, a few species of small trees, and lianas (climbing into trees, up to thirty meters).

Although there are no blue, violet, purple, and green peonies, and there is a substantial botanic difference between the flower structure of the two plants, some Hortensias could replace peonies if one is not too pretentious. 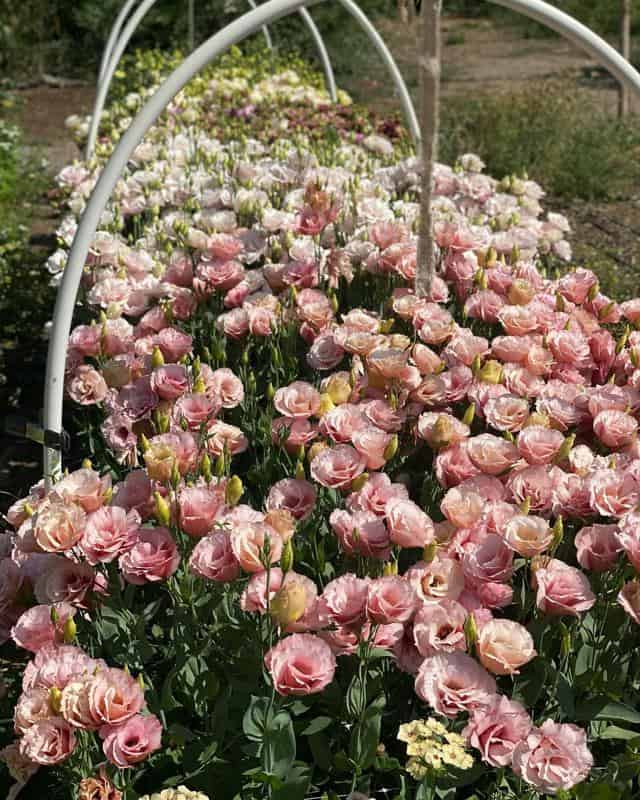 Lisianthus (Eustoma) is a small genus with only two or three species, pretty delicate to grow and maintain.

Lisianthus blooms mainly in early summer (although some might continue to bloom the whole summer).

It is a beautiful tall-end flower, single or doubled, with a wide variety of colors: blue, white, purple, pink, even two colors (carmine-red and yellow).

The species that look similar to the Peonies are Texas Bluebell and Prairie Gentian; the good news is that Lisianthus has two to three weeks of vase life. 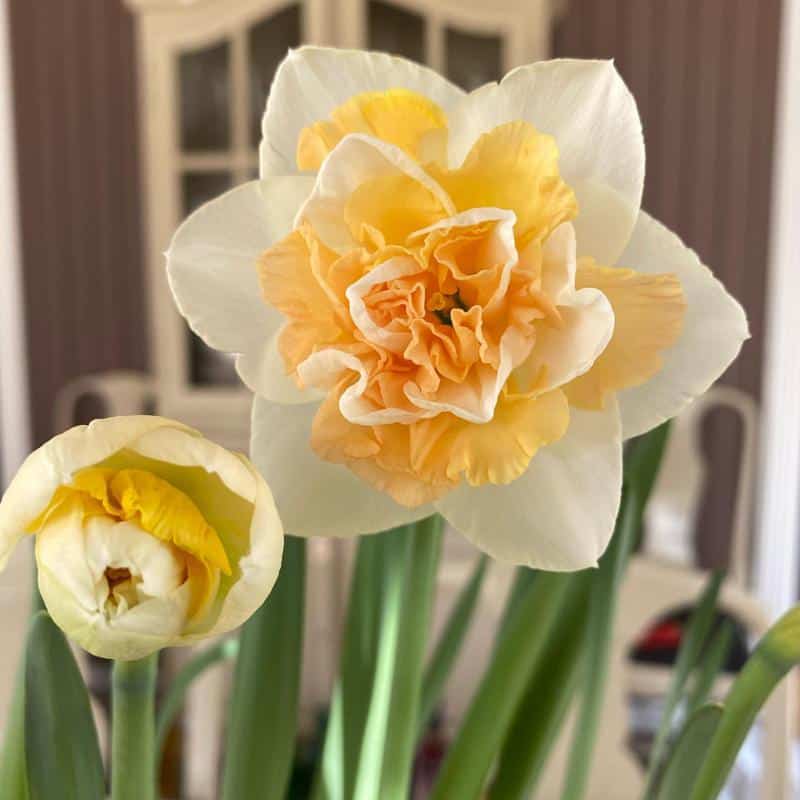 Also known as Double Narcissus by its Latin scientific name, Double Daffodil is the group of Daffodils that resembles peonies the best.

Double Daffodil is a serious competitor of peonies with a double trumpet, double layer of petals (or both), sweet fragrance, and colors varying from white, yellow, and pink to red and peach.

Thriving the best under threes and shrubs, Double Daffodils bloom middle to late spring and, differently from the other Narcissi, it shouldn’t be cut before full blooming.

The Double Daffodil offers an exquisite picture of colors when planted in bulk, and the species resembling peonies are Narcissus Tahiti, Narcissus Erlicheer, and Narcissu Bridal Crown. 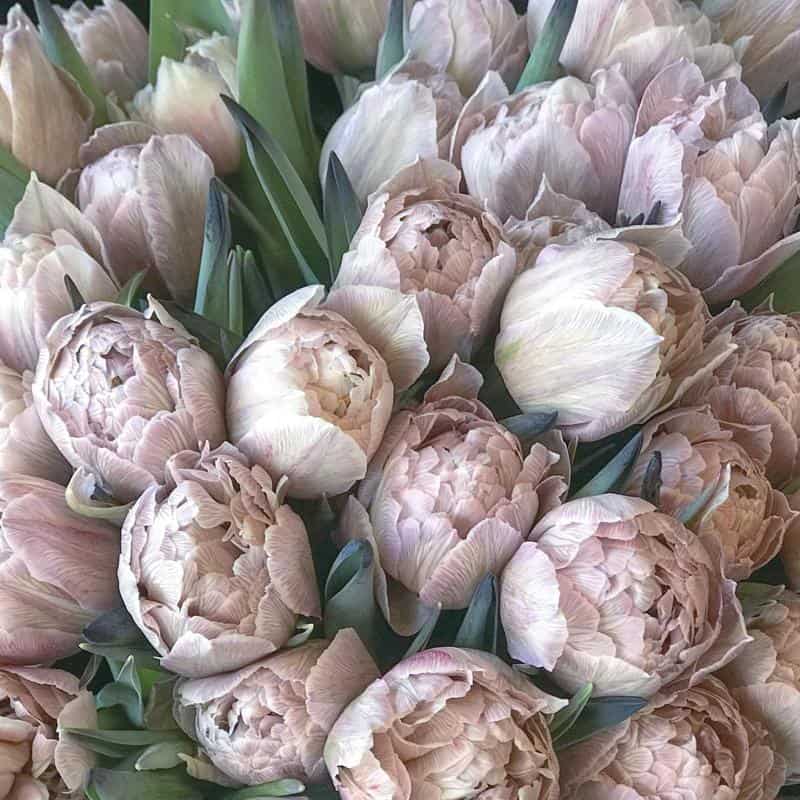 The Double Tulips hybrids have been bred precisely to be fluffier, one subcategory even being named “peony tulips” due to their similar look to peonies.

The Double Tulips bloom from February to March in a warm climate and from April to May in a cold environment.

Abba Tulip: the flower is a yellow core, surrounded by a double layer of blood-red fluffy petals.

Boule d’Or Tulip: as the name describes, the flower is a large, soapy yellow “bowl of gold”.

Montreux Tulip: like a twin sister of Peony, the flower is fluffy white with pastel pink on the outside petals.

Miranda Tulip: is a bright red flower with festooned petals edges which, along with the black and golden base of each petal, gives depth to the flower.

Orange Princess Tulip: the flower is double, dark orange (possibly striped with brown, red, or purple), and it has an irresistible fragrance besides the stunning peony-alike look.

Angelica Tulip: in case the double layer of the other flowers might not have been enough, this flower has multiple rows of delicate pink petals.

Uncle Tom Tulip: the flower is intense maroon or burgundy, with red and purples shades.