Whether you live in Florida or elsewhere in the world, you will find the breadth and diversity of lizards found in Florida fascinating! In total, Florida is home to over 50 different lizard species including a vast range of skinks and geckos boasting everything from vibrant colors to stunning throat fans. Today we have some fabulous examples of both native and non-native lizards inhabiting the Sunshine State. Without further ado, let’s dig into the splendid, scaly world of Floridian lizards…

Introduction to Lizards Found in Florida

Of the numerous lizards living it large in Florida, 15 are native species and the remainder are exotic or introduced species. Perhaps you have seen some of them in your own garden, perching on a fence or sunning themselves on a warm rock? Or maybe you’ve caught a glimpse of a tail disappearing into the foliage as you hike along a mountain trail?

The hot, humid climate of Florida makes it a perfect location for countless reptiles who require warmth to activate their cold blood. Most lizard species are quadrupedal, using a side-to-side movement pattern as they run along. Usually lizards are carnivorous or at least insectivorous, and many employ the ‘sit-and-wait’ technique – an energy-efficient method of catching prey.

In fact, Florida is the global number one in terms of invasive reptile species – perhaps not the first statistic you would boast about as a resident of Florida! The sub-tropical climate encourages reptile species to thrive, and consequently several invasive lizards have taken advantage of this opportunity.

If you would like to find out more, check this out.

Some examples of Florida’s Invasive Lizards 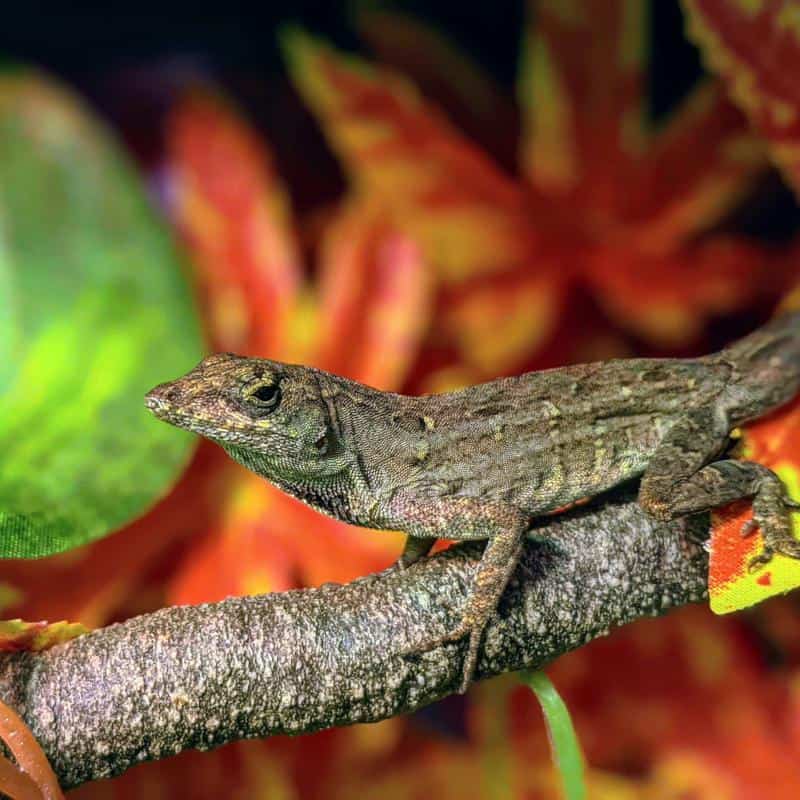 This small lizard arrived in Florida from Cuba. In fact, there are many invasive Anoles in Florida, endangering the native Green Anole by outcompeting it for food and habitat.

Brown Anoles range in color from brown to grey, often with white or yellow patterning on the back. They tend to dwell on the ground and can thrive in many habitats – a successful trait and one which makes them one of the most common lizards in Florida. 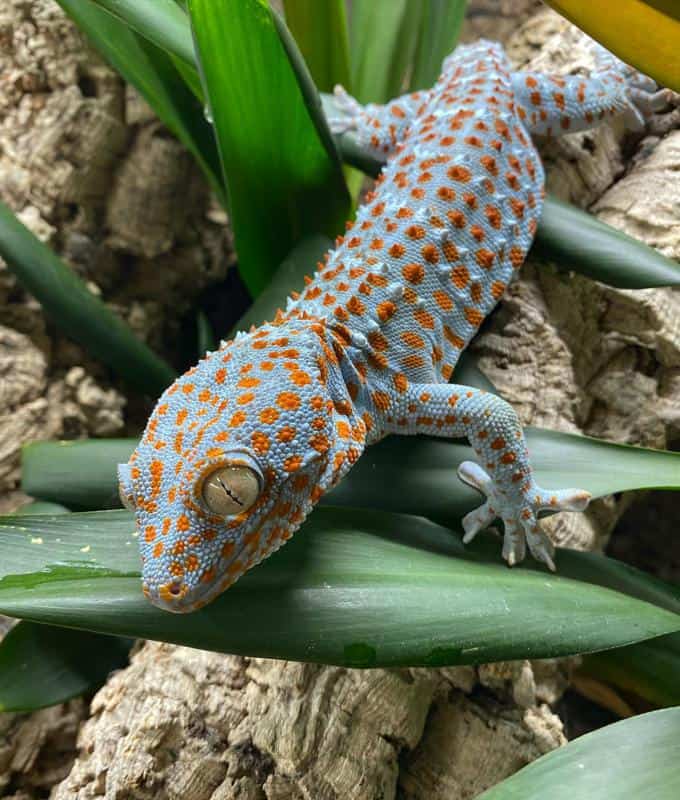 Although Tokay Geckos are native to south-east and east Asia, they have populated many areas through either accidental transfer on cargo, or the pet-trade (where they have either escaped or been intentionally released). Two color variations exist: red-spotted (with spots that range from red to light yellow) and black-spotted.

In Florida, this species of gecko has often been released in urban areas to tackle cockroaches, as these are part of their main food source. Unfortunately, they also eat many native frogs and birds, and have become a problem for this reason. 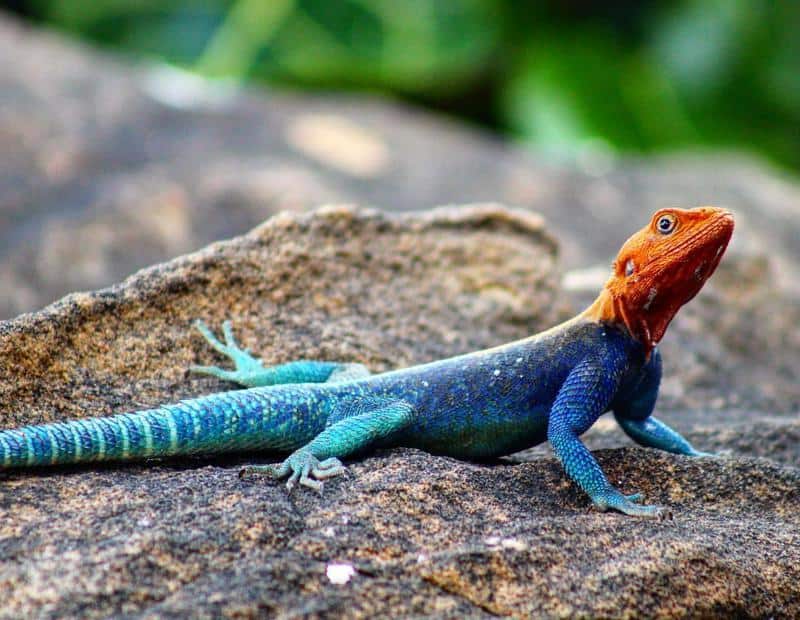 A stunningly species, sporting a brilliant orange head and blue to indigo body. These vivid colours become even brighter once the lizards are fully warmed from basking in the sun. African Redhead Agamas can be found in groups with one dominant male, several females, and some subordinate males. The males compete to become the leader of the territory which centres around an object like a large stone or tree where the group gathers. Subordinate males must eliminate the leader to gain the right to mate with females in the group.

This big species preys on some of Florida’s vulnerable native species and is thus considered an invasive threat to the native wildlife. 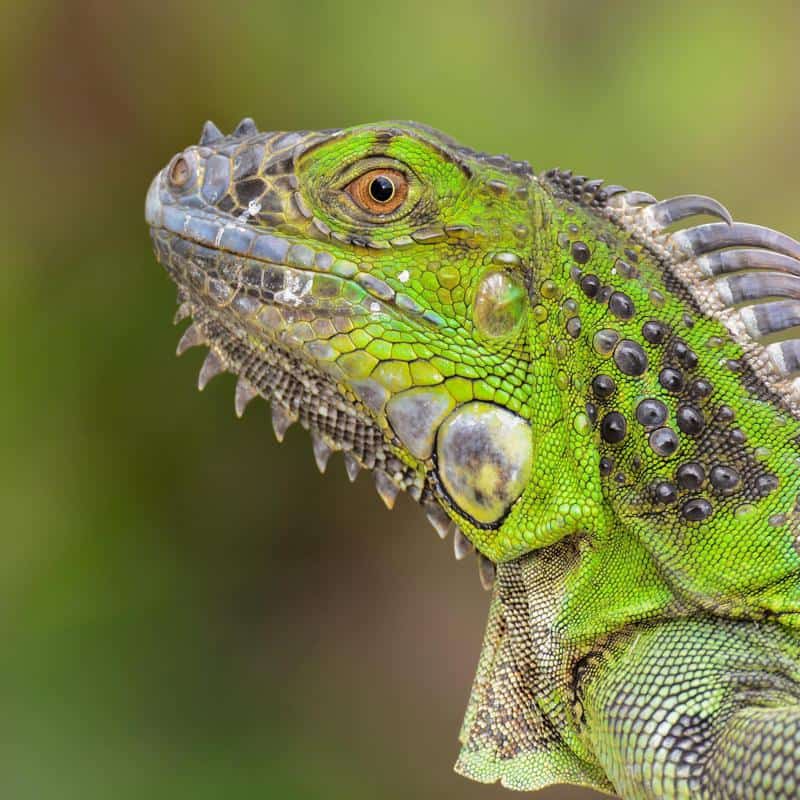 Originally native to South America, this species has expanded over the border and become extremely successful in Florida because it has no natural predators. They can be found pretty much everywhere, snacking indiscriminately on plants as an herbivorous lizard species. They burrow extensively to create egg-laying chambers, often causing erosion problems.

The Green Iguana is the largest lizard in the Americas. They are mostly an arboreal species, spending their time in trees unless they are mating or laying eggs. They use sharp teeth and spikes on their tails to defend themselves from threats. 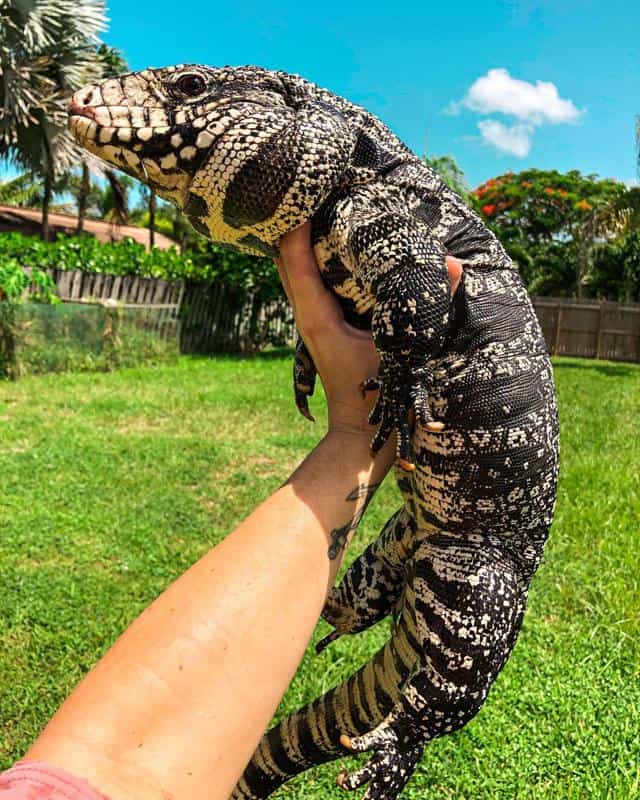 Last but certainly not least, this massive lizard is perhaps the most serious reptile threat to Florida’s native species. Originally kept as exotic pets, Tegus have been irresponsibly released into the wild and their population has rapidly expanded.

Their success could be due to their omnivorous diet – they will chomp on everything from plants, birds, mammals, other reptiles, and eggs. The apparent devastation they have caused it being extensively researched, and removal programs have been implemented.

Some Examples of Florida’s Native Lizards

Time to switch from the doom and gloom of invasives to the world of Florida’s native lizards! To be classed as a native species, a lizard species must have originated from the location it inhabits currently, and to have adapted to its surrounding environment. Many native species have filled ecological niches, specialising for example in certain micro-habitats. This often makes them unique or endemic to a particular location. Let’s look at a few excellent examples… 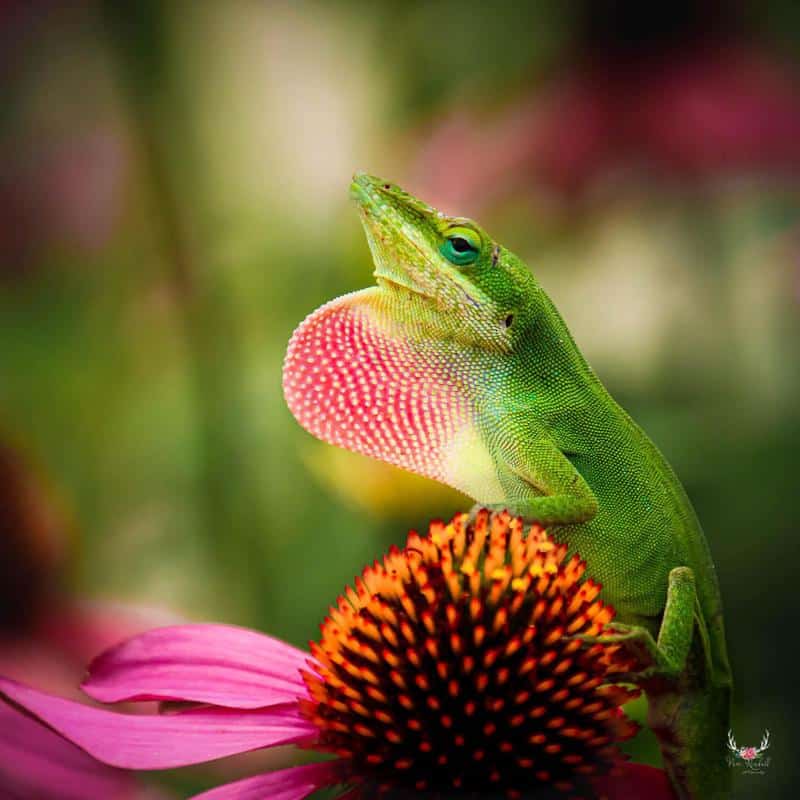 Of the many anoles that can be found in Florida, the Green Anole is the only native species. The invasive Brown Anole (listed above) can be seen far more frequently than the illusive, Green Anole which effectively camouflages itself against greenery.

This species is known for its incredible throat fan, or dewlap, which is magenta and used either defensively or during courtship displays. The male’s dewlap is larger than the females, and they will inflate it when competing with other males for territory, or to communicate their mating intent with females. 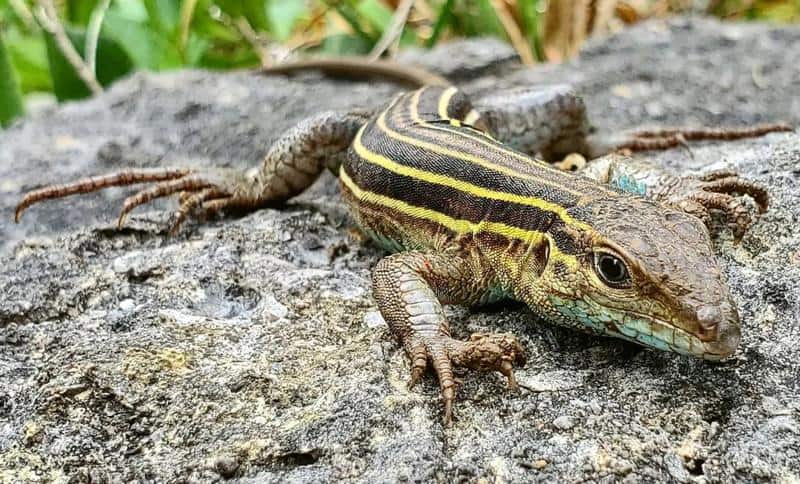 A very distinctive lizard with 6 stripes running down its back which vary from yellow to green-yellow. True to its name, it can run at high speeds up to 18 miles per hour (8 metres per second!) to avoid danger.

Six-lined Racerunners prefer dry, open habitats where they can bask in hot temperatures which help activate them so they can reach their top speeds. At night, they will hide in cool burrows to avoid nocturnal predators. This species is mainly insectivorous, but may diversify and catch larger prey when they are at their most active. 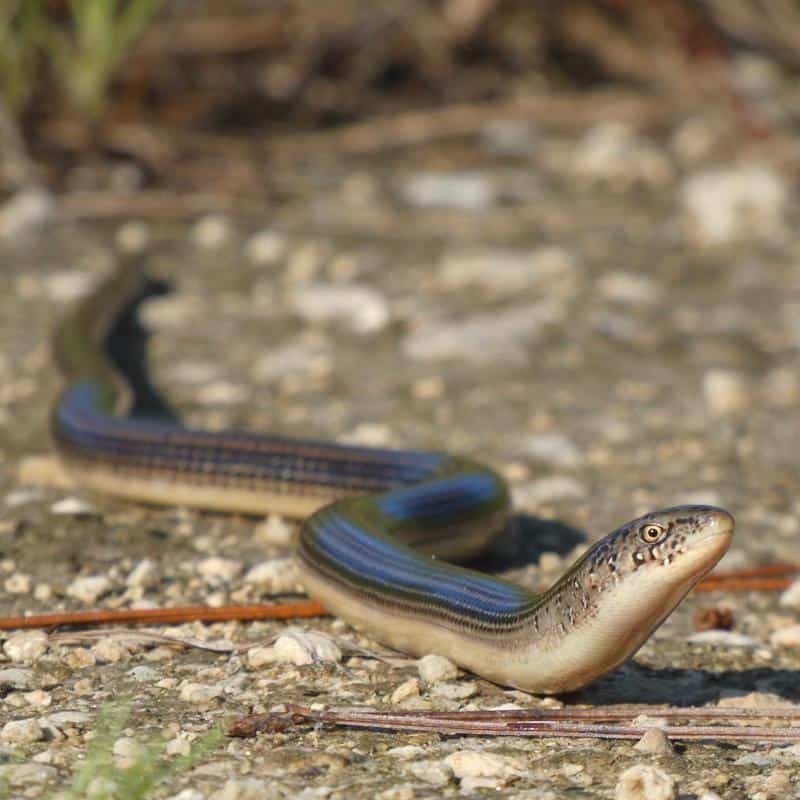 Take one look at this species and you would be forgiven for thinking it was a snake and not a lizard! In fact, the Eastern Glass Lizard is one example of a legless lizard. Two key features to look out for that differentiate it from a snake are the existence of eyelids and earholes (snakes have neither of these!).

The coloration ranges from brown to black with beautiful, mottled, green-yellow speckles. Eastern Glass Lizards can be found in coastal areas, around sand dunes and in wetlands. It will readily break off the tip of its tail when threatened – a crazy characteristic common to all lizards! This behaviour is called autotomy and is used to distract a predator – the tail tip will continue to wriggle while the lizard dashes away! 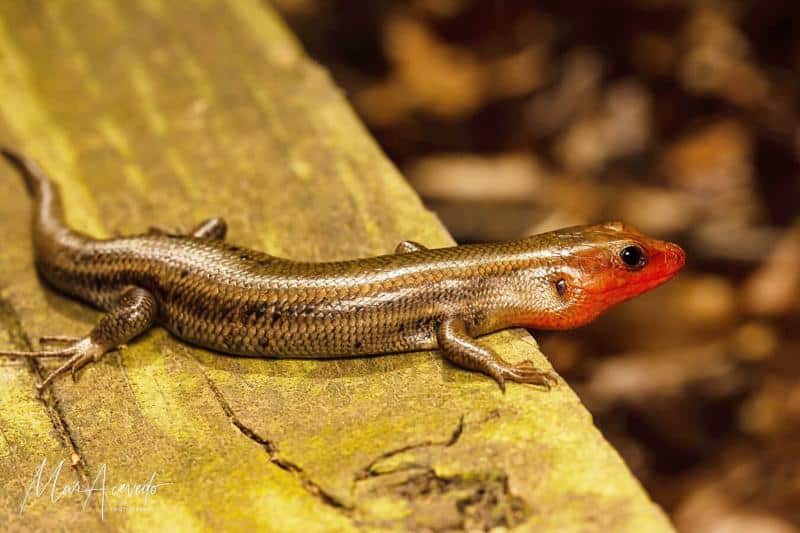 Notable for its tangerine-orange head, the Broadhead Skink can be mostly found in wooded areas. Sometimes they possess 5 white or yellow stripes running down their back and sides. This species is mostly insectivorous but will sometimes eat other small reptiles.

One evasion trick they employ is to dart up a tree at full speed when disturbed. They may even swim or hide under debris to avoid danger and unleash a nasty bite if captured! Unfortunately one threat they face is predation from domestic cats which are reducing their numbers. 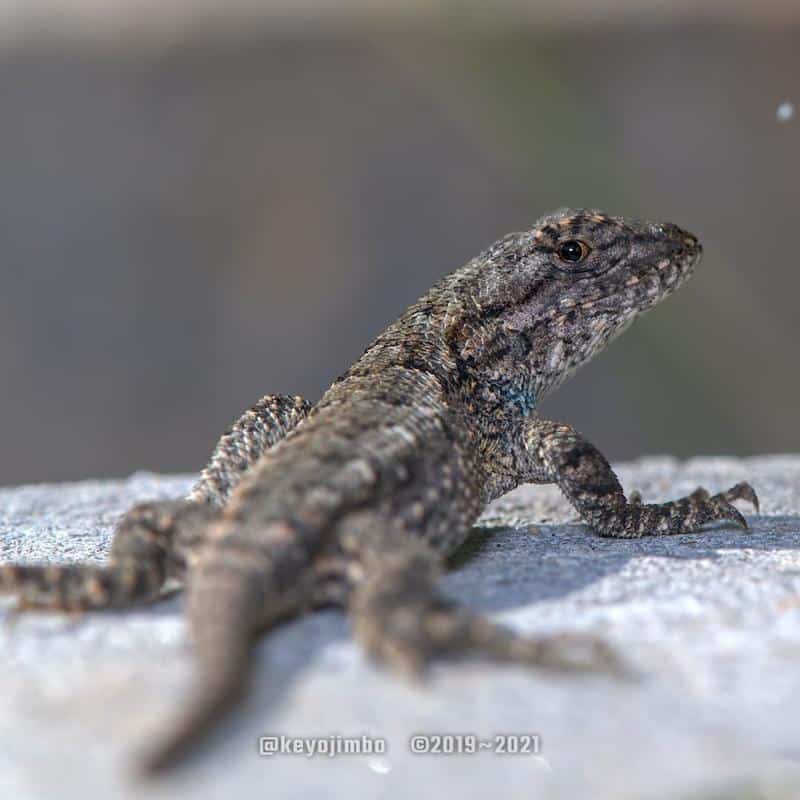 If you live in Florida and you own a fence, you may well have spotted an Eastern Fence lizard perching upon it! Also known as:

Although their coloration is not striking, and more geared towards camouflage, their keeled scales (scales with ridges down the middle) make a lovely, detailed pattern up close. Males have a patch of electric blue scales on their throats. Often, they can be spotted basking atop natural features like stumps and rock piles, and on artificial structures like fences and log piles.

Eastern Fence lizards are threatened by Red Imported Fire Ants, an invasive species. These fire ants bite the lizards, leading to envenomation. They also out-compete the lizards for territory, and feed on the lizards’ eggs. Fortunately, Eastern Fence Lizards can learn to avoid the ants’ bites by twitching their bodies to throw them off, but egg predation is unavoidable.

Many people are confused between lizards, skinks and geckos – are they separate groups? What are the differences? Let’s break it down to make it a little easier:

What Are Lizards Useful For?

Lizards are beautiful to look at, and interesting to learn about, but you may wonder if they are useful in any way? The answer is a resounding yes. Here are only a few of the many reasons:

Like all wildlife, lizards have their place in an ecosystem, and form an important part of a healthy, functioning ecosystem with good biodiversity.

How And Where Can I See Lizards in the Wild?

Lizards can be found in many locations all over the world. Generally, they like hot and humid conditions, like those found in Florida and other sub-tropical climates. If you are out and about on a walk, try stopping every now and then to peek at a sun patch amongst vegetation. Often lizards can be found basking in sunny spots close to vegetation or rock piles where they can escape to if threatened.

If you live in an area where lizards are abundant, you can try attracting them to your garden by laying down some broken bits of pottery, creating small stone piles, and eliminating the use of pesticides on your property.

The best advice is to do some research specific to the area you live in, and then get out and explore! Who knows what kind of scaly friends you could discover in your own neighbourhood!

What is the Life Cycle of a Lizard?

Generally, the life cycle of a lizard is broken down into 3 stages:

Also Read:  20+ Most Amazing Different Types Of Lizards (We Divide Them Into 6 Infra-order)