Whether you are an experienced gardener or a keen amateur, it is important to be able identify and recognise plants with potential problems. You may have spotted some interesting weed-like plants in your backyard, in the park, or growing in the wild. There are very many plants which look like weeds and it can be vital to understand the differences, especially if the plant may have legal implications.

First, let us define what we mean by weeds, or weed. Here, we are talking about the well-known plant cannabis, which often has controversial associations, but has been used throughout history (in moderation) as a medicinal plant. There are many features of weed which make it an incredibly useful plant to society – it has biochemicals which can help to treat a range of problems from inflammation to digestion, and it also has anaesthetic properties. However, it is illegal to grow in many countries around the world.

Today, we will take a closer look at 13 different plants that are commonly mistaken for weed in an effort to help you tell the difference and take the appropriate action. Usually, it is the leaves that confuse people as the leaf structure of weed is common throughout the plant world. Join us as we learn more about weed-like plants and remove the confusion around this interesting subject…

How To Identify Cannabis Leaves 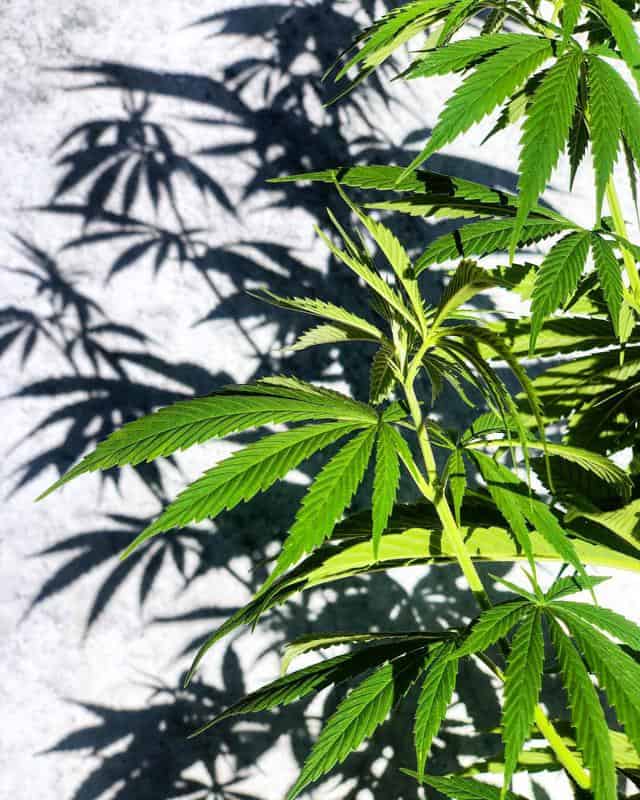 Cannabis is also known as hemp, and can be one of several species of the genus Cannabis. Throughout history, as well as being used medicinally, hemp plants have been used for making fibres (e.g. for rope-making), oils, and juices.

Usually, a cannabis leaf is made up of 5-7 sections (leaflets) which are technically one leaf but look like 5 separate leaves. The leaflets are deeply toothed or serrated and end in a sharp point. The underside of the leaf is paler than the upper-side, and the veins one the underside are distinctly embossed. There may also be fine hairs on the upper-side of the leaf. The middle leaflet is always longer than the surrounding leaflets.

The plant has a distinctive smell often compared with cat pee or skunk spray. The buds are usually more colourful than the leaves and are accompanied by pistils (hair-like structures) which range from white to orange or red.

If you think you may have come across a cannabis growing site, it is first and foremost important to keep yourself safe by leaving the area as soon as possible. In this situation you should research the guidelines set down by your local government in terms of reporting the incident.

So, without further ado, let’s have a look at some common weed-like plants… 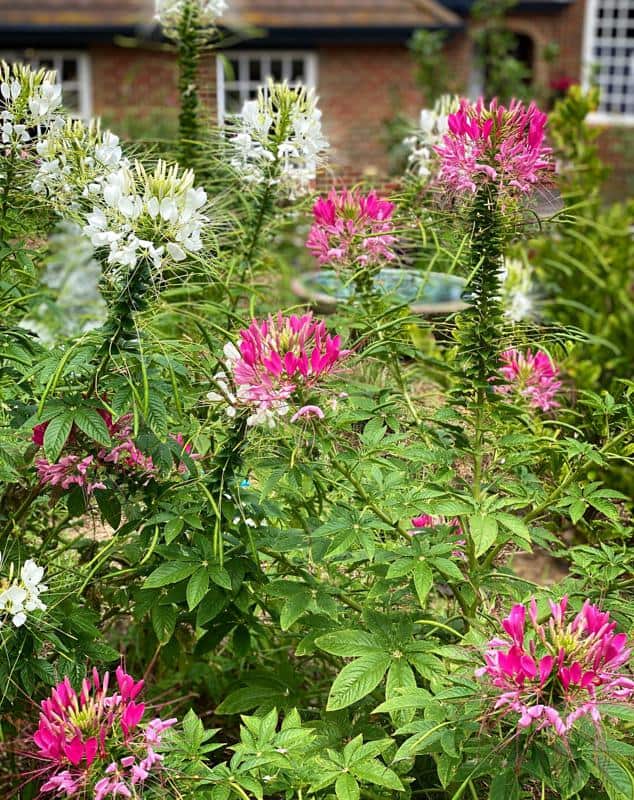 This species has a very similar leaf structure with 5-6 leaflets and a dark green shade. It also has long, pointy leaf tips which can be lightly serrated. However, the serration is much less vivid compared to weed and can be non-existent, giving the leaf edges a smooth, straight line.

Cleome is planted ornamentally in gardens, and is remarkable for its beautiful white, red, or purple flowers which bloom throughout summer and die off at the first frost of the season. It attracts many insects and is especially beneficial for pollinators. 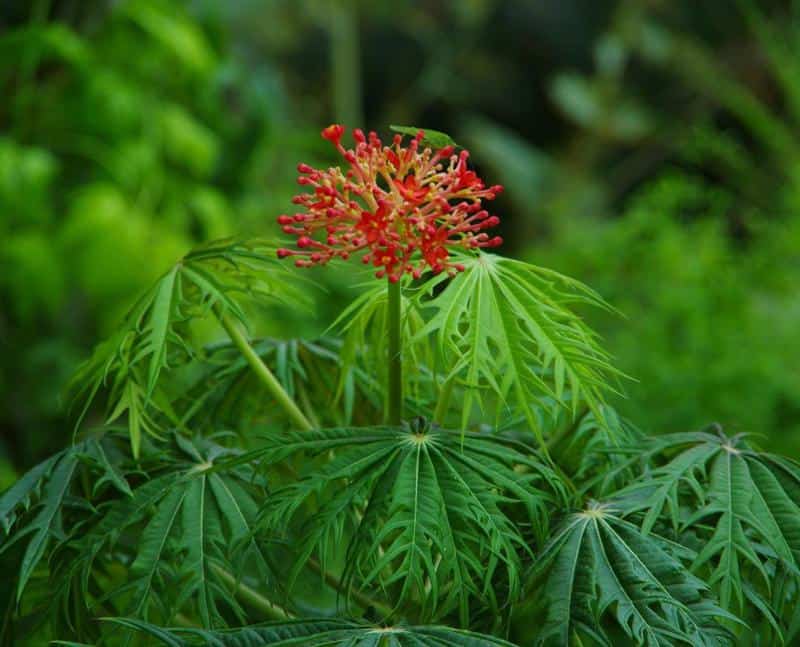 The leaflets of coral plants can also possess jagged, highly toothed edges, although some leaves can also have straight edges. The leaves are usually bigger than those of weed, and contain up to 10 leaflets.

The coral plant is a tropical plant and grows in the wild primarily in Central America and Mexico. It is grown ornamentally due to its striking bunches of pink flowers. 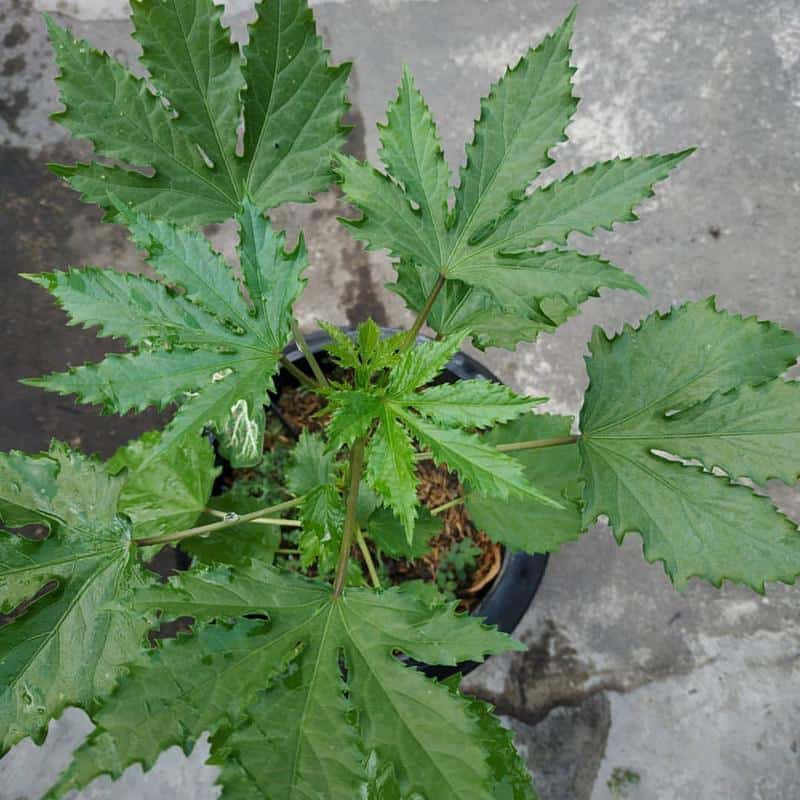 The leaves of a mature kenaf plant have 5 leaflets, but the lower 2 leaflets tend to be joined to the upper leaflets, and are much smaller in size. It is more usually mistaken for weed when it is at a younger stage, when the leaves are thinner and more pointed. There can be some serration on the leaves but it is usually not well-defined.

Kenaf is widely used to make paper, fibrous rope and twine. This is one reason it is similar to weed and it has the species name cannabinus – in the context of fibre creation, weed is usually called hemp and has been widely used for making strong twine and rope among other things. 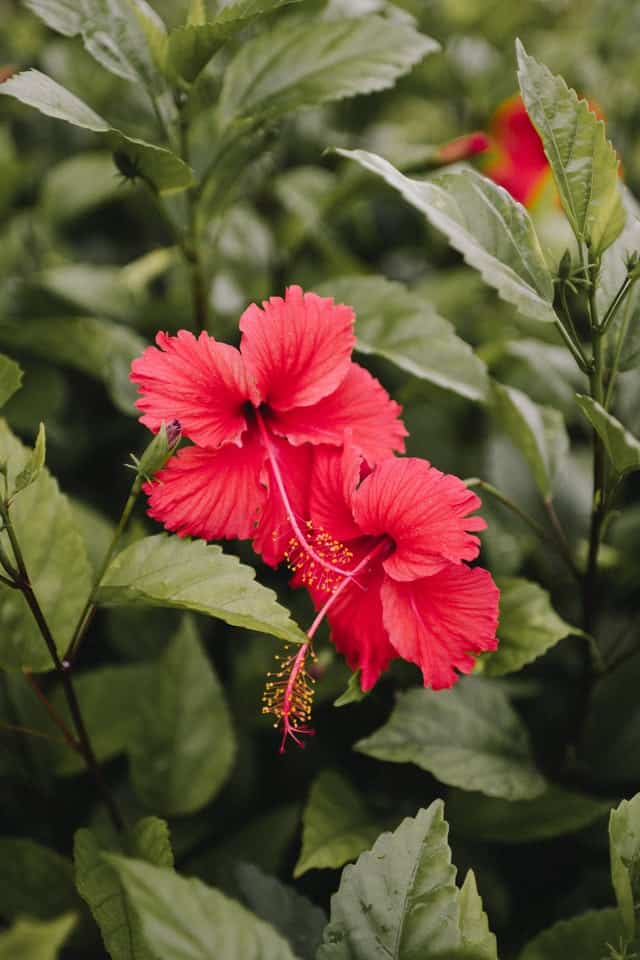 Also known as scarlet rosemallow, the scarlet hibiscus has very similar leaves to weed. It sports 5-6 leaflets which are long, pointed and have some gentle serration along the edges. In the summer it will bloom with crimson red flowers, marking it strongly apart from weed. The leaf stalks are also pink-red which give it the first part of its common name ‘scarlet’.

It can be grown easily outdoors in free-draining soils in most areas of the USA, and the flowers are popular with hummingbirds. 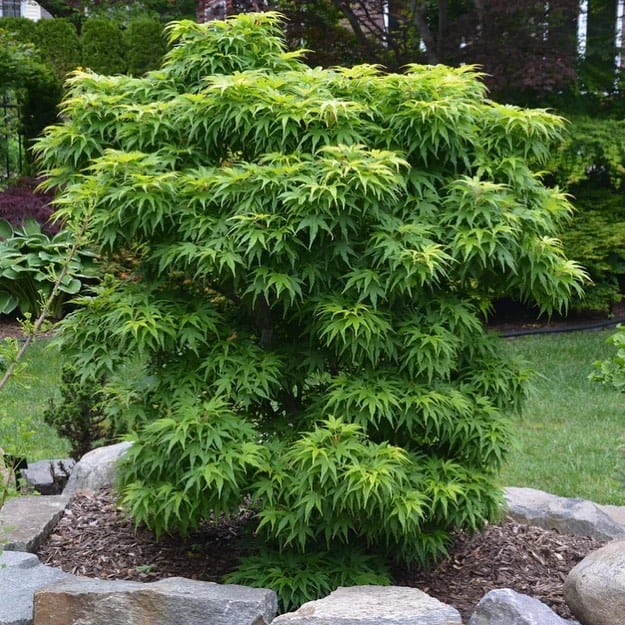 There are a great number of varieties of Japanese maple, with a range of leaf sizes and forms. This species is a tree, although it tends not to grow particularly large, and some varieties grow in a more bush-like form.

Like weed, it possesses leaves with 5-6 distinct points which are sometimes separated from one another on the leaf stalk, but are usually joined together at the base. They can also have heavily toothed edges but the overall leaf tends to be much smaller with less sharply pointed leaves than weed.

It is a popular ornamental tree, grown for its beautiful form and range of lovely colours from dark purple through green to yellow. 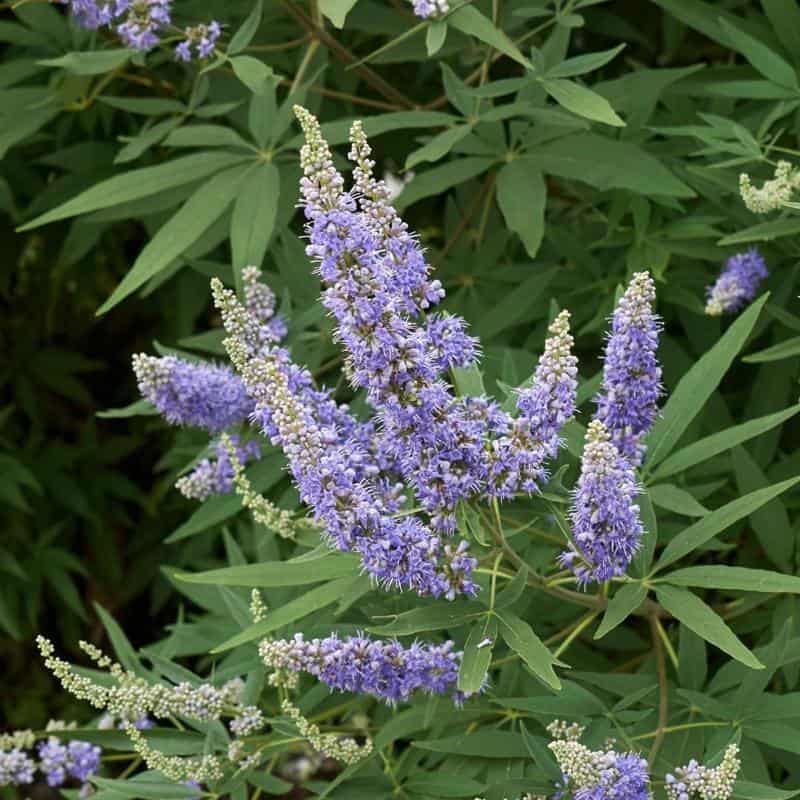 Technically another species of tree, the chaste tree has leaves with 5-7 narrow, pointy leaflets and a dark green colour. However, the edges of the leaves are straight and smooth without serration. It will become very distinct from weed when it has fully matured.

Interestingly, the chaste tree also has medicinal properties and can be used for tea. Both the leaves and purple flowers can smell pleasant, and the flowers attract pollinators. It can grow very tall, up to 6 metres if left unpruned. 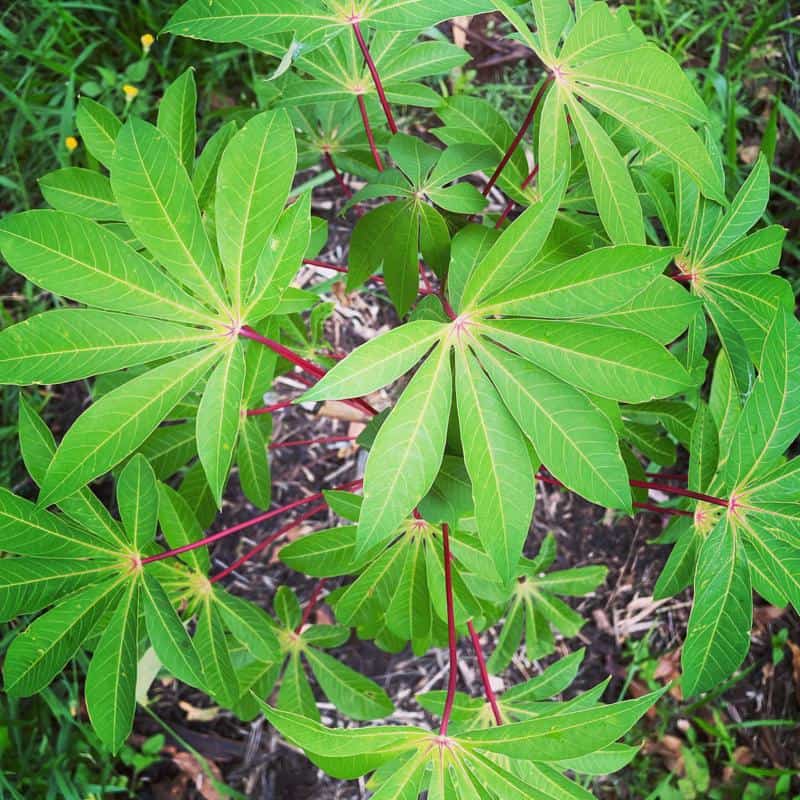 This well-known, widely grown root crop also has leaves with 5-6 leaflets, but the leaf stalks are usually red. The leaves also have a smooth, straight texture and are not as pointed compared with weed leaves.

Cassava is a staple food crop throughout Asia, Mexico, Africa, and Central and South America. The roots can be poisonous if not cooked properly. As a herbal medicine, it is sometimes used to treat problems like fatigue and sepsis. 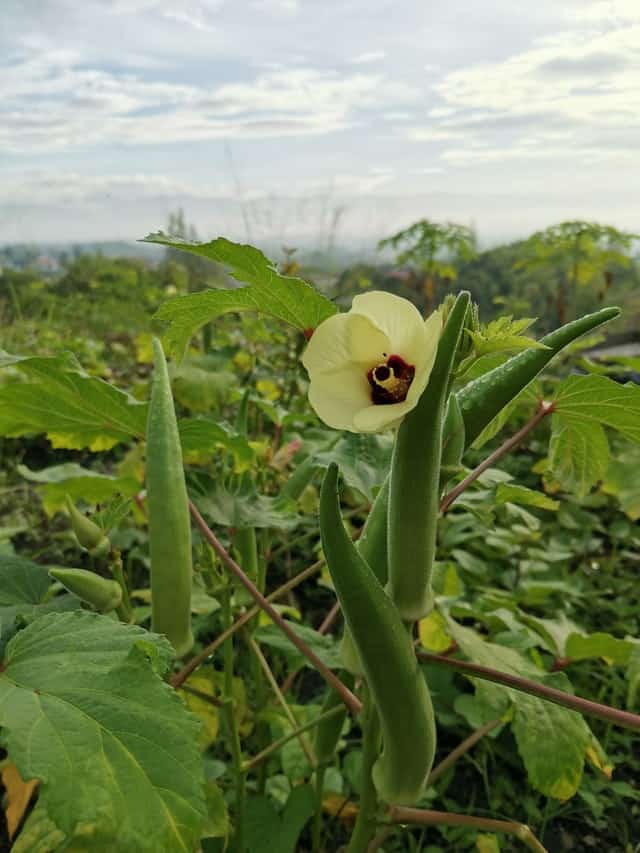 Another common vegetable, okra has a similar leaf form to weed, but the leaves are much broader and the tips are not as pointed. The leaf edges are also not serrated. The buds and flowers can be very similar to weed which often leads to identification confusion.

Okra as a vegetable is widely used in Indian dishes, and is rich in nutrients. It is cultivated in tropical climates, primarily in Africa and Asia. 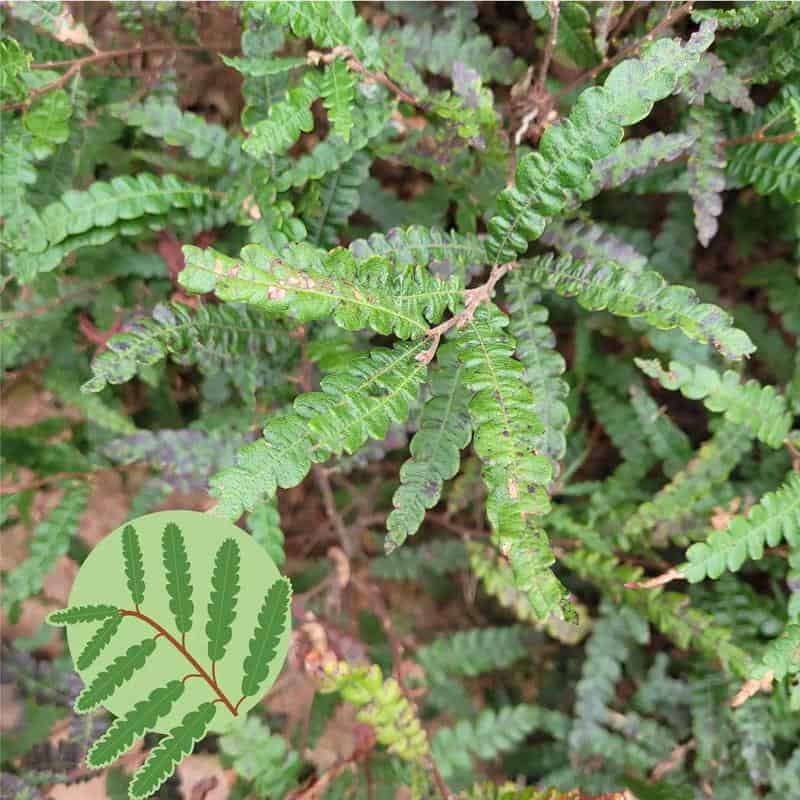 This species is not actually a fern, but a member of the bayberry family. The leaves are highly serrated like those of weed, and can have a similar smell. However, the plant has a much bushier form, and the leaves grow in bunches.

Sweetfern is commonly grown as a fragrant herb, and can be used medicinally as mosquito repellent. It also has anti-itching properties. It can be easily grown in your backyard in the ground or in containers. 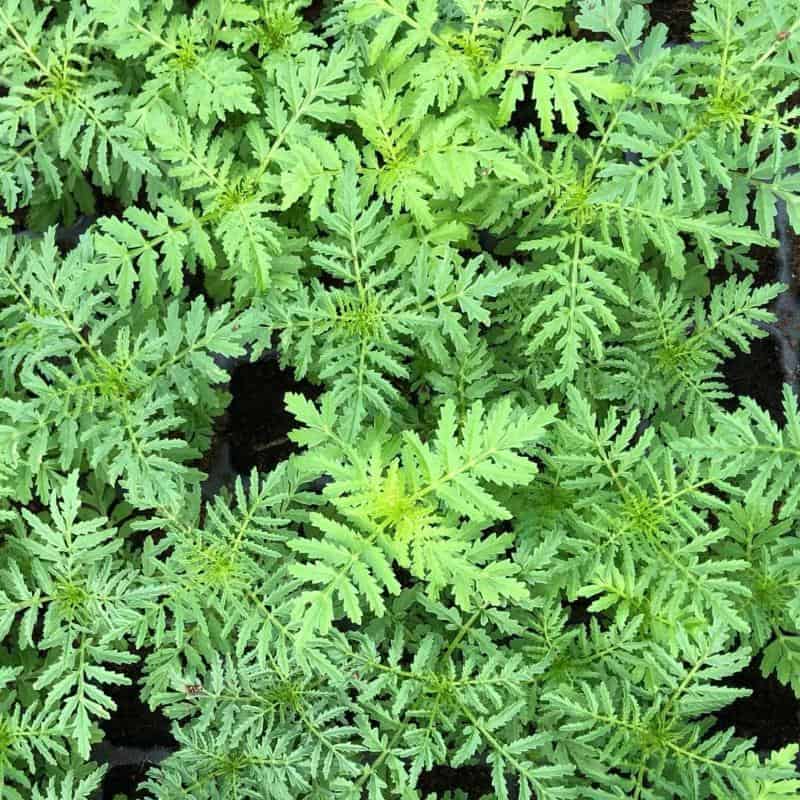 The leaves of this plant are long, pointed and serrated, much like those of weed. However, they tend to be thinner, and the leaflets are much more widely spaced down the leaf stalk. When the leaves are rubbed, they have a pleasant licoricey smell.

The muster-john-henry is native to South America but is now grown in many parts of the world. It blooms with yellow-white flowers in the spring. It has a wide variety of medicinal uses including stomach pain, coughs and sore eyes, and very many more. 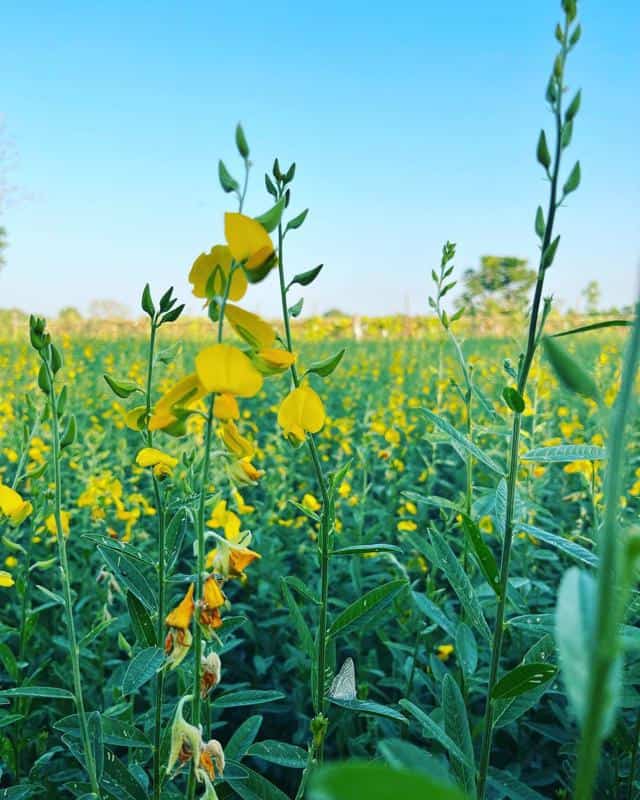 This plant has tall stems, bushy leaves and sometimes serrated leaflet edges. It also has similar buds to those of weed. However, the leaves are more widely spaced and the plant stem has a grooved, almost rectangular form.

Sunn hemp, also called madras hemp or Indian hemp, is native to India where it is commonly used in the textile industry as fibres. It is also being more widely used as a biofuel. 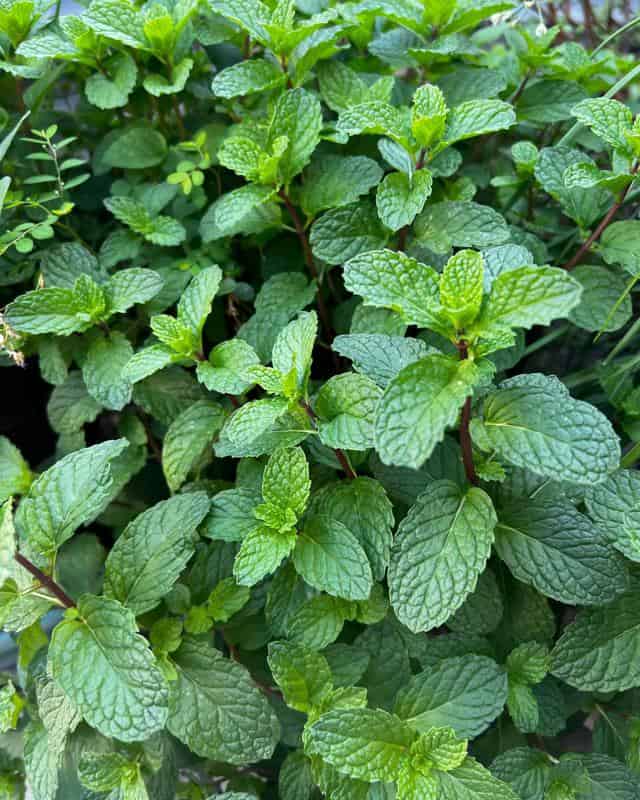 Mint can be mistaken for weed due to the young leaves being heavily serrated and pointed. However, the stems are hairier and the white flowers which bloom in the spring are more pellet-like and distinctly different from those of weed. Sometimes people can mistake the smell of mint as weed because some varieties smell quite different to what we may think of as a typical minty smell.

Mint can be an easy and rewarding plant to grow in your garden, and can be added to many dishes or used for cosmetics or medicinally. However, the roots can be very invasive and difficult to get rid of. In the right conditions mint can spread and take over a whole area. 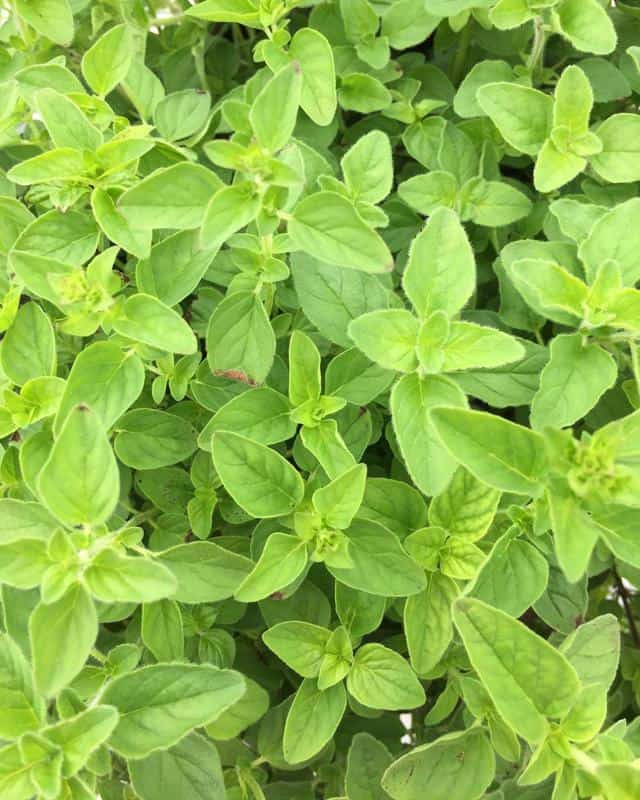 Oregano is, arguably, the herb which is most commonly mistaken for weed mainly due to the smell of it, especially in its dried form. It can have mildly serrated leaves but they tend to be wider and paler than those of weed.

Like mint, it is a very rewarding herb to grow in your garden, and can be added to a wide variety of dishes. It is especially famously used in Mediterranean cuisine. It can be used medicinally as an antibacterial agent.