Perhaps you have sighted an interesting plant growing in a farmer’s field that looks exactly like corn, but without the tell-tale cobs? Or you may have found a corn-like plant growing in your backyard or local park? There are, in fact, many plant which look suspiciously like corn and could easily fool a passer-by. Some of these include

Corn, is a common arable crop gown for both animal and human consumption. The sweet variety, also known as sweetcorn or sugar corn, is the variety most commonly grown for people to eat, and very popular amongst home-growers. It is high in sugars (giving it it’s sweet-sounding common name), and picked when the heads are immature (the milk stage). It usually makes its way to our dinner tables in the form of corn-on-the-cob or tinned corn kernels. Field corn, also known as maize, is the variety that is grown for animal fodder and harvested when the kernels have matured and dried (dent stage). Corn and maize will be used interchangeably in this article.

There are also some varieties of corn that are grown for ornamental purposes in gardens and public areas. These eye-catching varieties are grown primarily for aesthetic purposes and can sport bright foliage and multi-coloured cobs.

Today, we’ll be having a look at 8 plants which look like corn. We’ll explore the differences and similarities between these common plants, and ways to tell them apart from corn. Let’s dive right in and explore the wonderful world of corn and it’s similar-looking imposters…

How To Identify A Real Corn Plant

There are very many varieties of corn grown today, almost all over the world. All cultivars come from the original wild plant Zea mays which originated in Central and South America. This species is a member of the grass family, grass family Poaceae. The cultivation of corn has a long history and was originally domesticated around 9000 years ago in Mexico. One of the reasons that corn has become such a successful and widespread crop is thanks to the fact it’s very easy to modify the maize genome.

Currently, maize is the third biggest crop in production in the world and is used for everything from human and animal nutrition to alcoholic beverages, sweeteners and even fuel. The biggest producers of corn in the world are USA, China and Brazil.

In late summer, it is easy to identify corn due to the presence of cobs sheathed in green leaves (the husk) and positioned closely around the tall, straight stem. Varieties are usually tall but the height varies a lot so it is difficult to identify corn by height. The leaves are narrow and opposing – they grow on opposite sides of the stem, all the way up.

The stem can become 3-4 centimetres thick when the plant matures in summer. When the plant flowers in late summer, the flowers look like long, pale yellow or green tassels protruding from the end of the cobs.

One way to identify corn or maize growing in a field is by the dense-spacing and uniform rows. Zea mays is wind-pollinated, so planting them close together maximises the chances of pollination and getting a greater yield during harvest time.

If you see a plant which looks like corn at another time of year when it has not flowered or produced cobs, it can be useful to keep an eye on it and wait for it to flower in the summer. This can aid identification and help you to decide whether you want to keep it in your garden or lose it. Or otherwise this will give you a more positive identification if you’ve spotted a plant elsewhere that you are interested in. For an incredibly detailed description of Zea mays and its botanical features, check this site out. 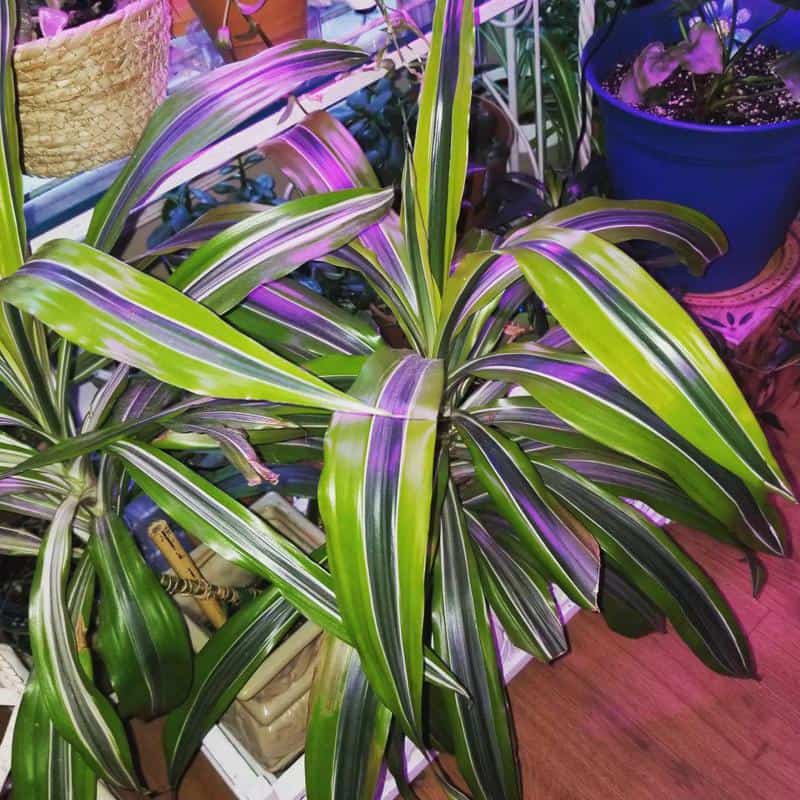 Perhaps unsurprisingly the corn plant is one of the most common plants that is confused with corn. This is due to its long, narrow leaves which droop down around the stem. The most likely place you will see this plant is indoors – it is widely used as a houseplant in the US and across Europe.

It can grow pretty tall in the right conditions, but usually gets to somewhere between 1.2-1.8 metres as it matures. When it is young is closely resembles a healthy young corn plant. However, as it gets older it produces bamboo-like, brown stems, and it will not produce tassel-like flowers or cobs at any stage. The leaves are often striped lengthways with lighter green or green-white. 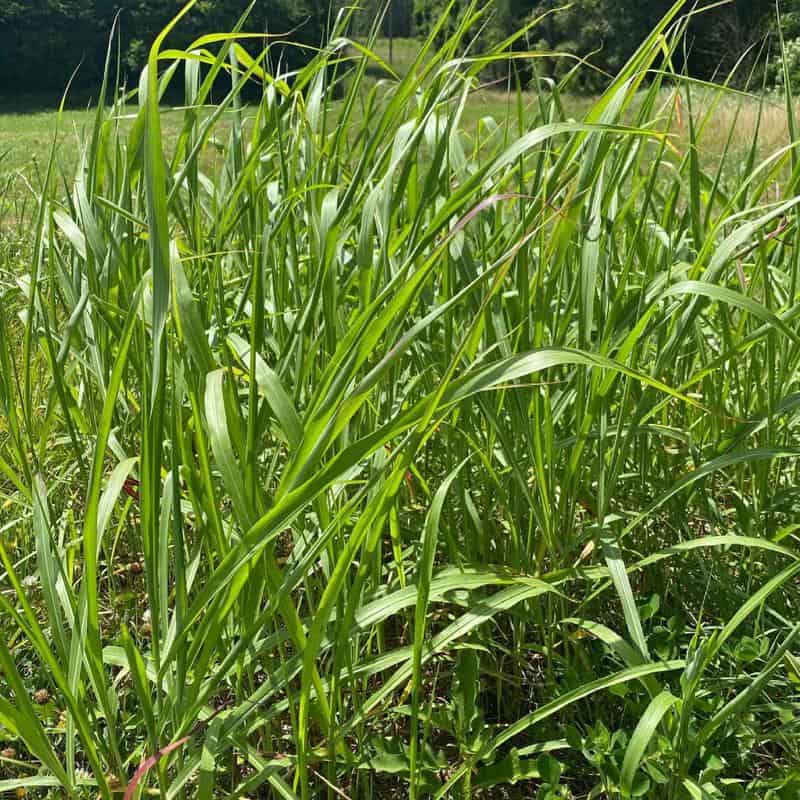 Johnson grass is classed as a weed in many areas of the USA due to its proclivity to grow and survive pretty much anywhere (and often where you don’t want it to!). Like maize, it is a grass and can grow pretty tall, between 1.8 – 2.1 metres. It looks especially like a corn seedling when it is young.

One easy but destructive way to tell it apart from corn is to pull it up and inspect the roots – if there are red-brown or black seeds present on the roots it is Johnson grass and not corn. Another potential ID feature is the presence of a vein running down the centre of the leaf which becomes off-white towards the base of the leaf.

Read more about it here. 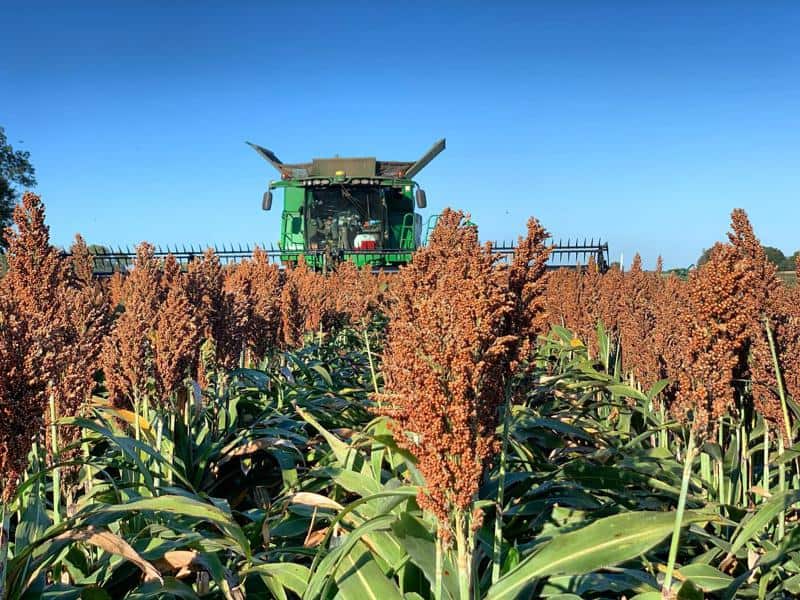 You may be familiar with sorghum crops if you live or have visited the Southern or Mid-western US. Again, it is a grass, and has an upright, leafy form much like corn. This is because it is closely related to corn – it is also in the grass family Poaceae. It also contains a lot of sugar and Sweet sorghum is commonly grown to produce syrup. Alternatively, the less sweet varieties of Grain sorghum (also called milo) are grown as feed for livestock like cattle and poultry.

If you see a field of crops that look a lot like corn but simply aren’t corn, sorghum is your most likely suspect.

Sorghum can also grown pretty tall, and ranges from around 1.5 to 3 metres depending on the variety. Compared to corn, sorghum tends to have thinner, less lush leaves. But the real difference lies in the flowers – sorghum flowers appear as large tassels at the top of the plant, and sorghum does not produce cobs. 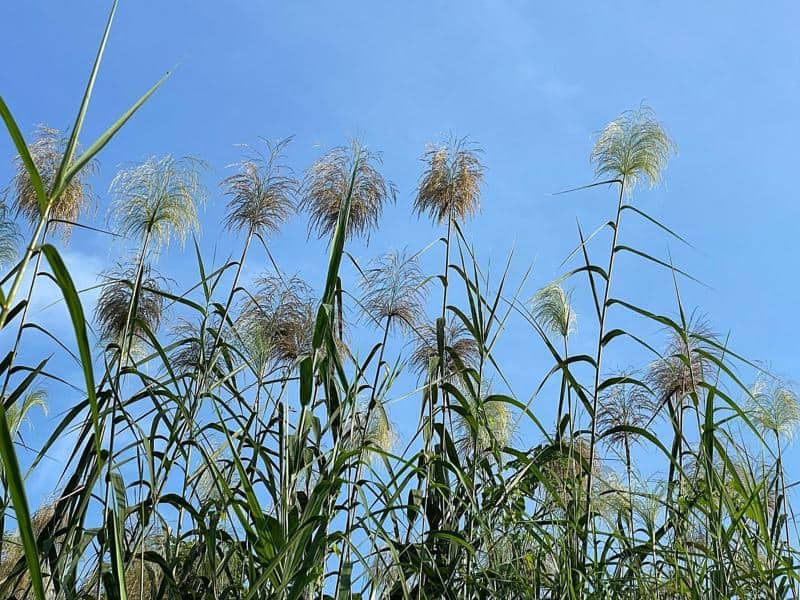 The giant reed truly lives up to its name, it can grow up to 6 metres tall! Its long, strong stems and drooping leaves also look very much like cornstalks. Traditionally, the hollow stems are used to make reeds in wind instruments.

This species is also in the Poaceae family and is technically a grass, but more specifically classed as a cane. One useful ID feature is that it is usually found in wet areas and riparian type habitats whereas corn usually grows in drier locations. In the late summer the giant reed will flower, producing a long, purple-silver plume which protrudes above the foliage. 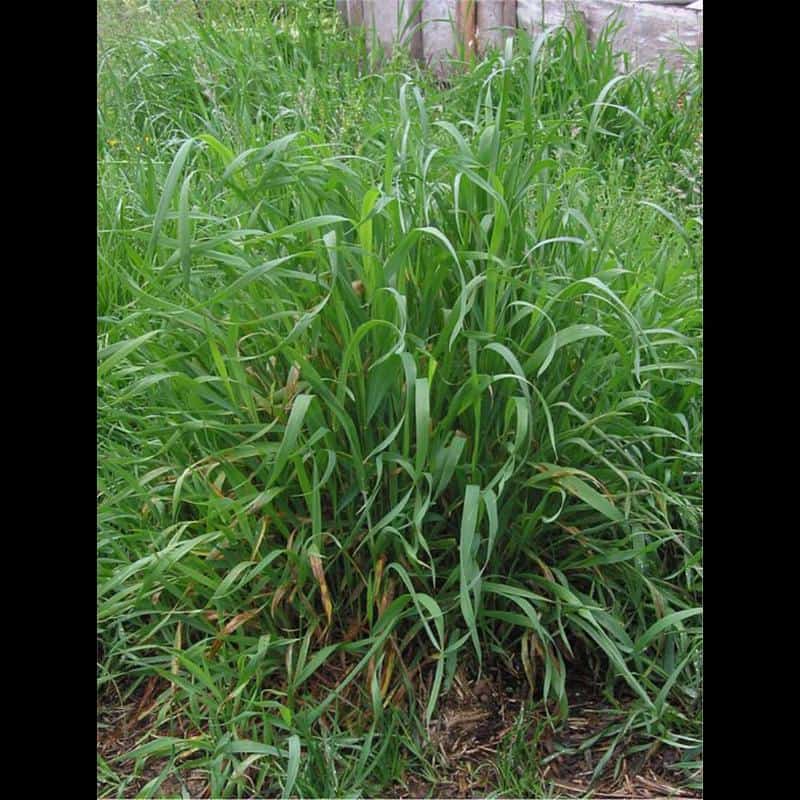 Also known as couch grass, quack grass is a persistent, quick-growing species of grass with a vast range. Where it is found growing in arable land and other cultivated areas it is usually considered as a weed. Similarly to corn, its leave are flat, long and dropping. It can be mistaken for a young corn plant.

One useful ID feature is the texture of the leaves – the upperside is hairy or waxy while the underside is waxy. This is one way to tell it apart from the normally smooth corn leaves. It grows up to 1.2 metres tall and in clumps which also marks it out from corn. In the summertime, spiky flower heads appear. Another reliable ID feature is the long, white rhizomes on the roots which are responsible for its successful spreading habit.

This towering crop is becoming more and more widely used as a biofuel. Giant miscanthus is a specially bred hybrid of two wild species of miscanthus: Miscanthus sinensis and Miscanthus sacchariflorus. It is another type of grass which can grow around 3-4 metres in just one growing season, and is perennial (will resprout year after year) which means it doesn’t need resowing – two reasons why it is a successful biofuel crop.

At a glance, with its long, this drooping leaves and obvious thin stems, it could be mistaken for corn. But miscanthus has more woody, bamboo-like stems, and its leaves are even longer and thinner than those of corn. If you see it growing in the same farmer’s field year after year, it is likely to be miscanthus rather than corn. 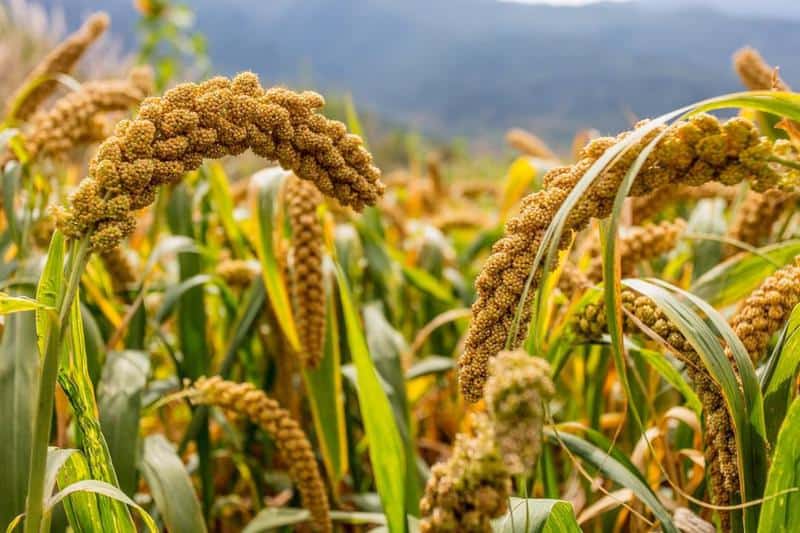 Pearl millet is another widely grown crop which is popularly used in the USA as a hay crop or harvested for its fine grains and used as animal fodder. It is incredibly drought resistant and can be used in dry areas or areas with frequent dry spells.

This species is another type of grass and can grow between 1.5-3 metres high. In late summer the flowers appear as long spikes at the top of the plant, producing usually cream-white grains which are harvested once mature. The close spacing of this crop and the lush, drooping leaves positioned all the way up the tall central stem gives it a close resemblance to corn before flowering in the summer. It has a bunching characteristic, producing several stalks from one central plant – this can be one way to tell it apart from corn which produces only one stem per plant. 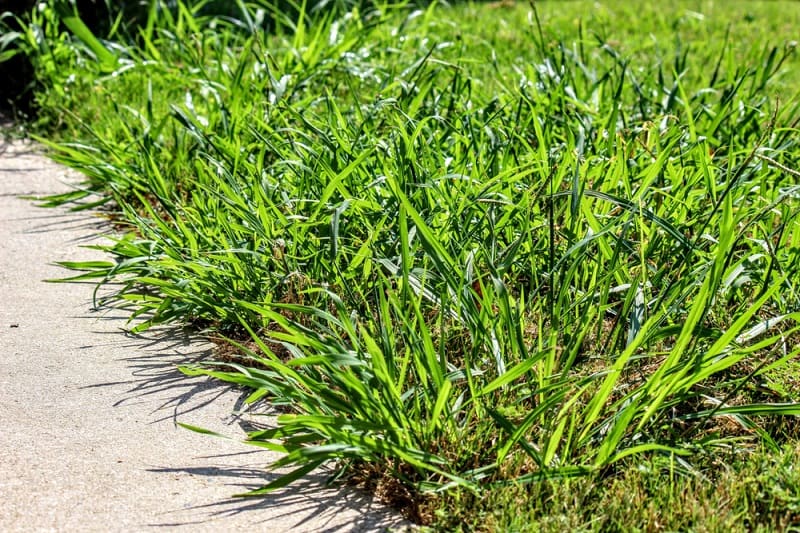 This small, often invasive grass can be mistaken for corn seedlings in the early stages. Crab grass grows low to the ground and sprouts green stems with long, drooping leaves either side. Like quack grass, it is often classed as a weed on cultivated land due to its spreading root system, resistance to damage, and fast reproduction.

The easiest way to tell this grass apart from a young corn plant is the fact that it often sprouts multiple stems from the base of the plant. At maturity, the leaves are only around 12 cm long, much shorter than corn leaves. It will also not produce cobs or tassel-like flowerheads.

One way to deal with crabgrass if it has invaded your lawn or cultivated area is to pull it up by hand or ensure your lawn is in good health and maintain its vigour to ‘drown out’ the crab grass. If the problem is bigger then you may need to employ herbicide – it is recommended to find an organic herbicide and avoid the use of harmful and destructive chemicals which can have dangerous consequences for the environment.

Find out more about it here.

If you still can’t identify the interesting plant you have found which looks just like corn but isn’t, let us know and perhaps we can help you solve the problem. There are very many crops and wild grasses which can closely resemble corn out there. The best tip is to wait until summer and observe the way the plant flowers and sets seed. This can help you easily distinguish between a corn look-a-like and a real corn plant. We hope you’ve enjoyed learning more about corn and several of the plants which trick us into thinking they are corn!