While the skunk’s odor is a formidable defense, there are several animals that have no problem preying on these smelly creatures. Great horned owls, bobcats, coyotes, and foxes are some of the most common predators of skunks. Weasels, opossums, and raccoons will also kill and eat skunks.

Interestingly, one of the few animals that will not eat a skunk is the house cat. A study conducted in 1990 found that domestic cats avoid skunks because they cannot stand the smell.

In this article, we are going to see in which part of the food chain skunks belong. You’ll learn everything you need to know about these foul-odoring creatures.

Why Are Skunks so Smelly?

Skunks are smelly because of the foul-smelling secretion they use to ward off predators. They have a gland in their anus that produces this noxious liquid. When they are threatened, they will turn their hind end towards the predator and spray the foul-smelling liquid.

This secretion is composed of several chemicals, including thiols, which are also present in garlic and onions. It has the signature rotten-egg smell which is difficult to remove. This secretion is oily and, besides its atrocious odor, it causes irritation in the eyes and skin.

The odor it releases is so strong it can be smelled from a distance of up to a mile.

Editor’s note: Don’t panic if you get sprayed in the eyes by a skunk (yes, it can happen). You’ll feel like you’re going blind, but it’ll pass. The secretion doesn’t cause permanent damage whatsoever.

What Species Are Major Predators of Skunks?

Since skunks’ defense mechanism is so formidable, you’d think skunks have it pretty easy in nature. But that’s hardly the case, as there are several animals that have no problem preying on these smelly creatures.

Skunks are an important part of the food chain, and they are considered a delicacy by many other animals. 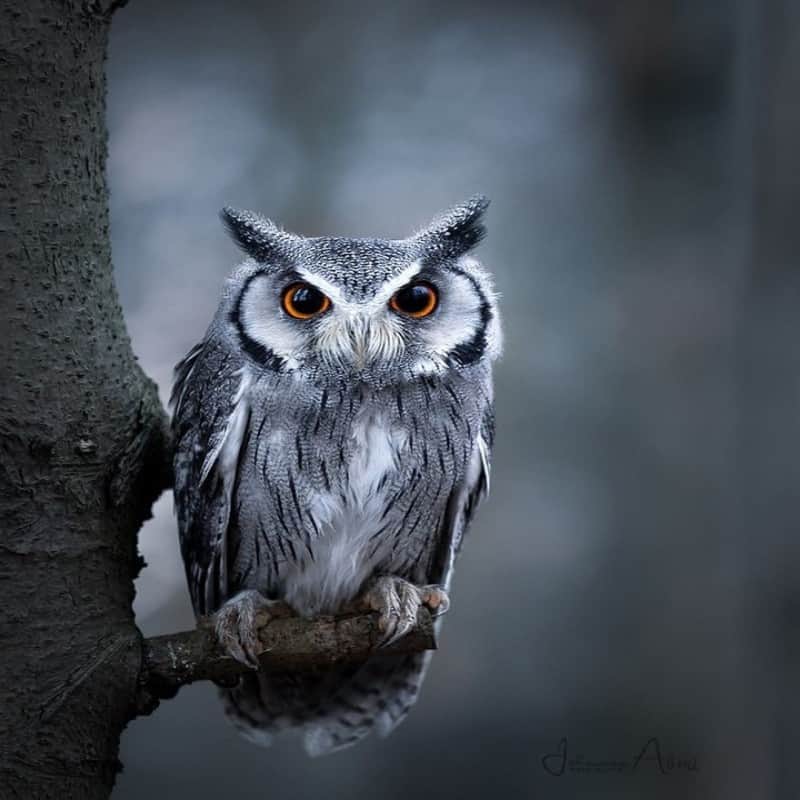 One of the most common predators of skunks is the great horned owl. These owls hunt at night, which makes it easier for them to catch their prey unawares. Great horned owls have sharp talons and beaks that they use to kill their prey.

Skunks have a real hard time figuring out they’re being assaulted by great horned owls, making their liquid almost worthless. It’s very rare for a skunk to successfully defend itself against a great horned owl. 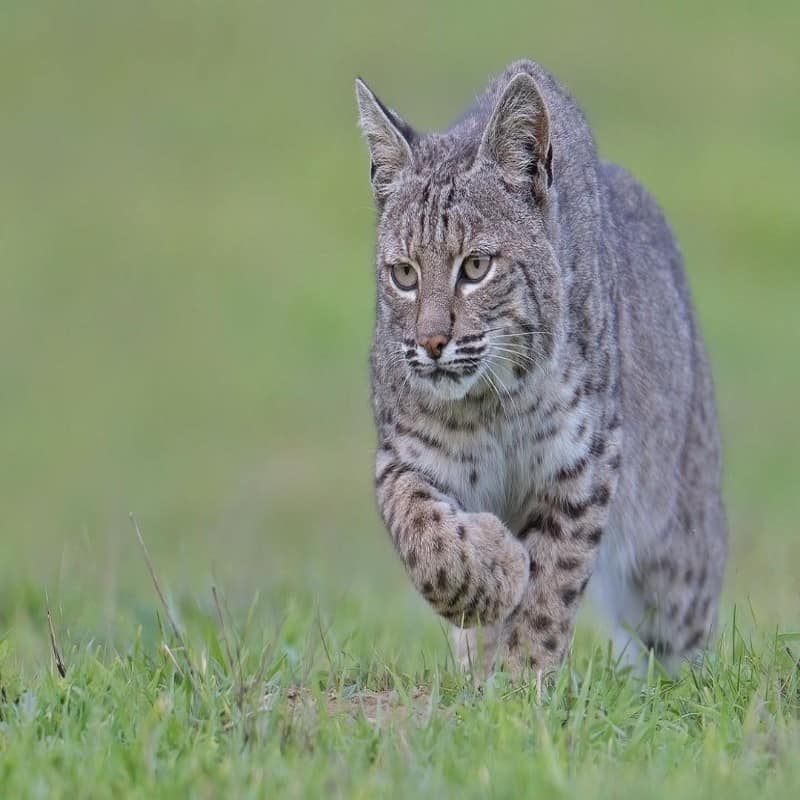 Bobcats are also common predators of skunks. These predators are larger than house cats and have sharp claws that they use to kill their prey. Bobcats are also proficient hunters and can take down a skunk with ease.

Bobcats catch skunks by stalking them. They will hide in the bushes and wait for the skunk to come close. Once the skunk is within reach, the bobcat will pounce on it and kill it with its sharp claws.

It’s all about not giving the skunk time to react. 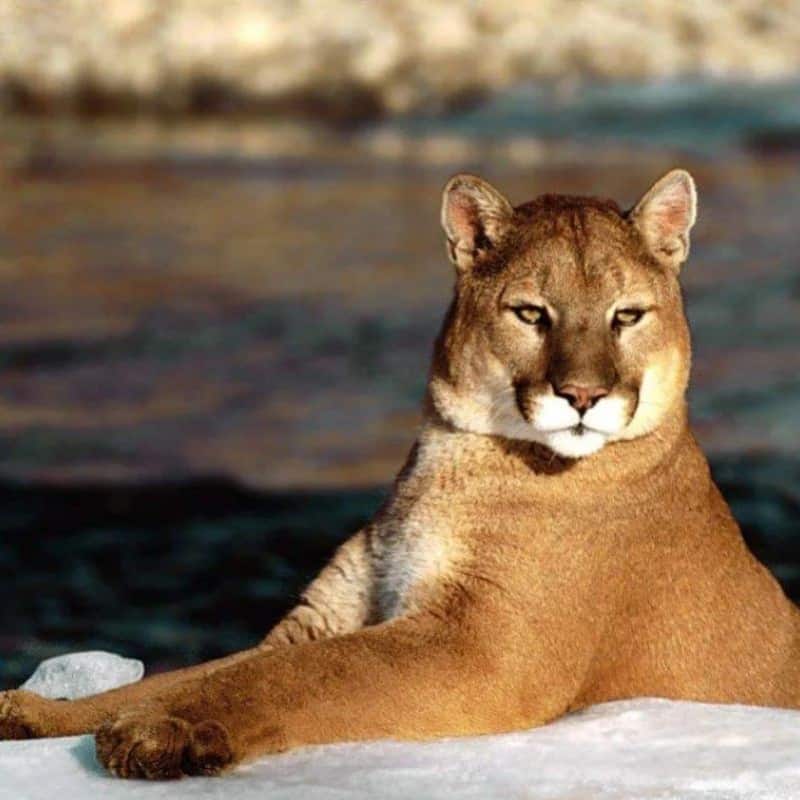 Their hunting method is similar to that of the bobcat. They will stalk their prey and then pounce on it when it’s within reach. Naturally, the success of their hunt depends on whether or not they manage to sneak up on the skunk without getting noticed.

If they fail, they’ll face the almighty wrath of the skunk’s secretive liquid. Not only they’ll run away with a bad irritation and smell like someone died, but their pride will also be scarred for a while. 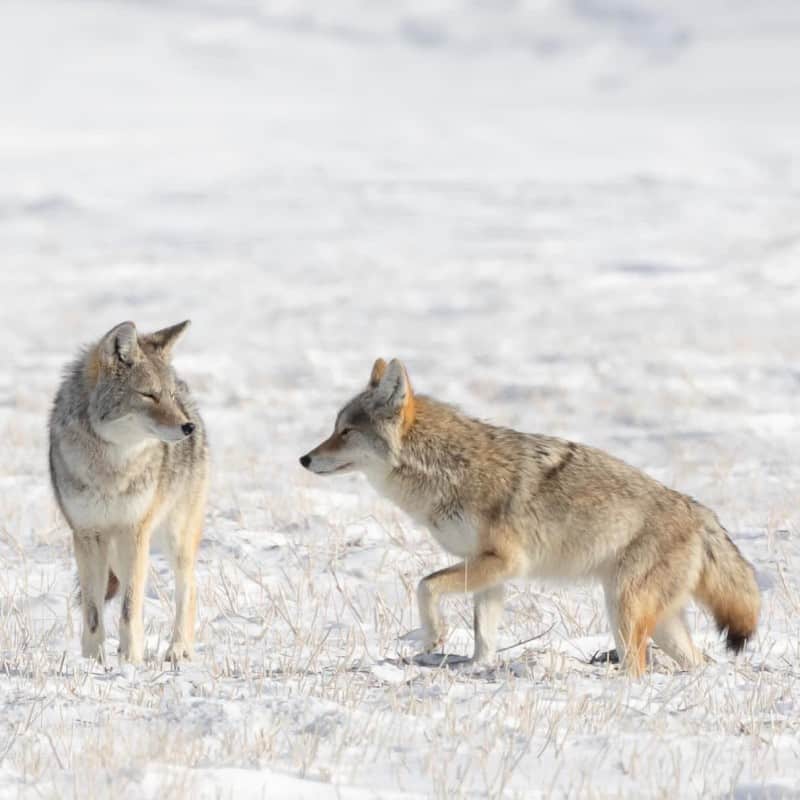 Coyotes are another common predator of skunks. These animals are members of the dog family and are known for their scavenging habits. Coyotes will eat just about anything, including skunks.

Coyotes hunt in packs, which gives them a significant advantage when hunting skunks. They will surround the skunk and wait for it to spray its noxious liquid. Once the skunk has sprayed its liquid, the coyotes will move in for the kill. 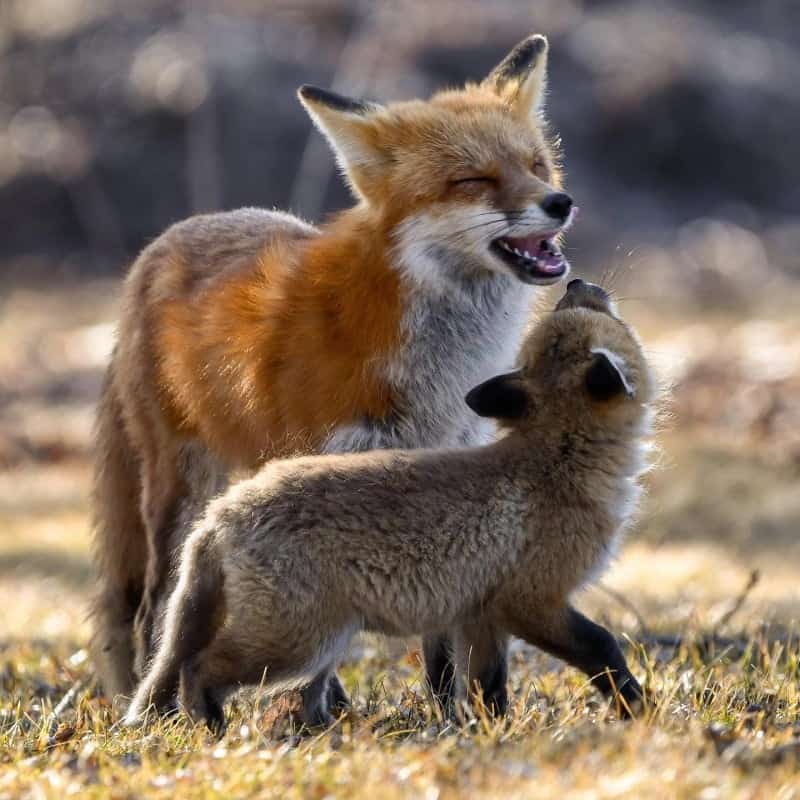 Foxes are creatures that look like dogs. They have pointy ears and a bushy tail. They live all over the world and eat just about anything. Their preferred hunting methodology is stalking.

Their pounces are extremely quick and dangerous for their preys, who are left with almost no time to react. Foxes, like most other predators of skunks, go for the kill when the skunk is busy doing something else and unaware of their presence.

But foxes are also scavengers, so it’s likely that they’ll look for dead skunks, rather than hunting alive ones. 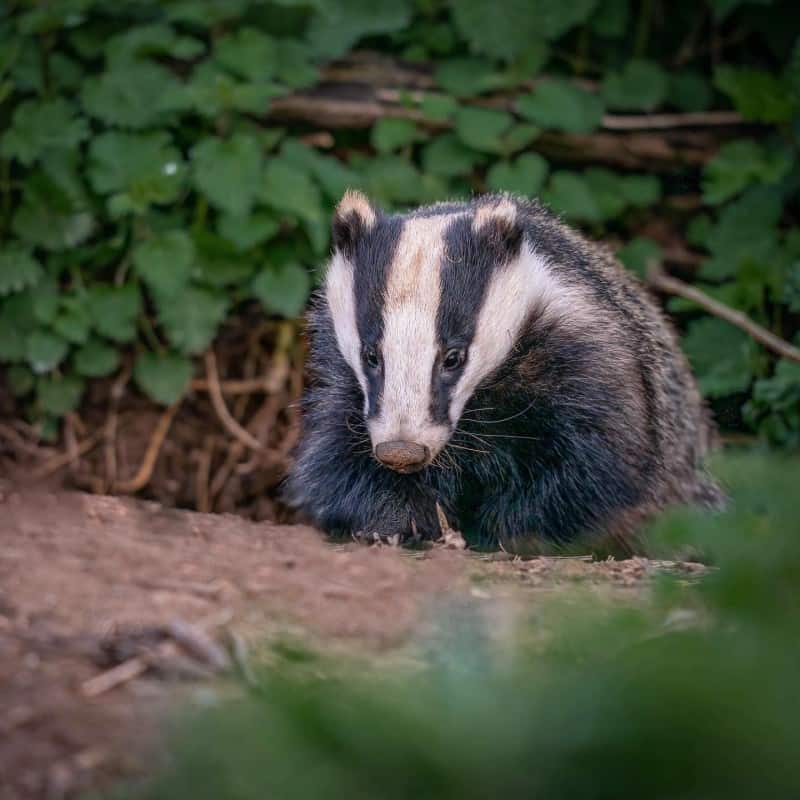 Badgers are another common predator of skunks.

An interesting fact about badgers hunting is that they often do it in tandem with coyotes. While this seems backwards-after all, they can’t both eat the same pray-it’s actually an effective hunting strategy. The coyotes will chase the skunk while the badger waits in ambush. Once the skunk is exhausted, the badger will move in for the kill.

This improves survival chances for both species in the long term, that’s why they do it.

When hunting alone, they’ll hide themselves and jump on the prey when it’s in range, not giving it a chance to retaliate. 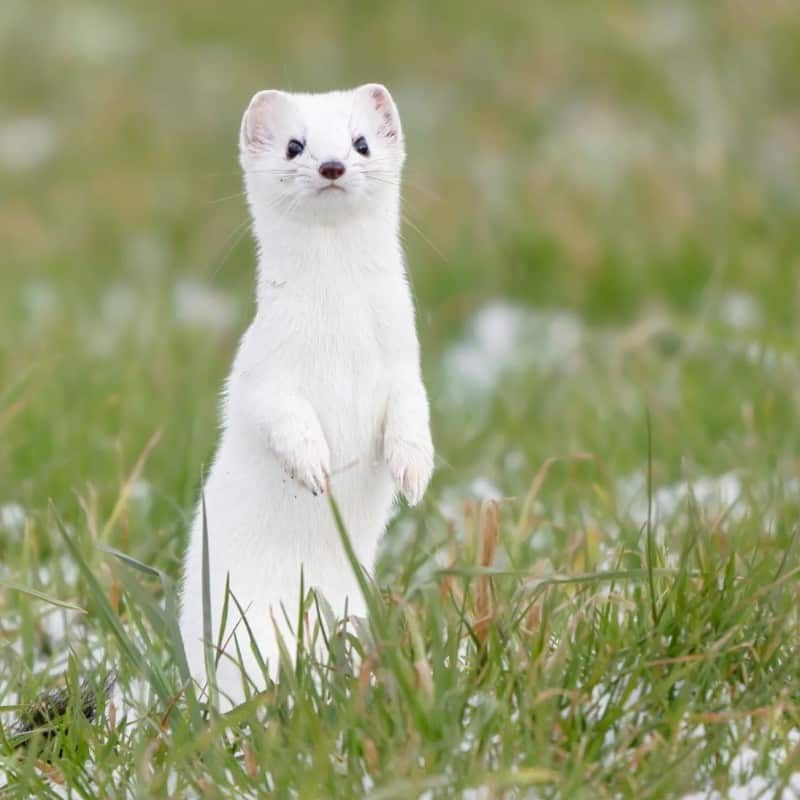 Weasels are small, brown & white creatures that live in the wild. Weasels are predators and eat other small animals. They have sharp claws and teeth that they use to kill their prey. Weasels are also known for their ability to steal eggs from birds’ nests.

When it comes to skunks, weasels will typically go after baby skunks. They will kill the baby skunks and eat them. While weasels are small, they are a significant threat to skunks.

Editor’s note: It’s important to note that while skunks have several predators, they are still a relatively common animal. This is due to their high reproductive rate and their ability to spray their noxious liquid at potential predators. So while skunks may not be the most popular animal, they are definitely here to stay.

Beside their well-known defense mechanism, skunks have another one that’s not talked about as much.

Skunks are nocturnal creatures and they are most active at night. This is when they typically hunt for food. However, skunks will also sleep during the day. When they are sleeping, they are very vulnerable to predators.

To protect themselves from predators, skunks will often sleep in dens. Dens are small, underground tunnels that skunks digging using their claws.

Dens provide skunks with a safe place to sleep during the day. They also provide protection from the cold weather in winter.

When a skunk feels threatened, it will often retreat to its den. Skunks will also use their dens to give birth to their young.

But their biggest boon is the combination of powerful glands and distinctive fur color.

Skunks have their characteristic black fur with white stripes. This seems counterintuitive – wouldn’t small animals with so many predators want to camouflage themselves? But at night, their white stripes are very visible in the moonlight.

There is a reason for this: skunks want to be seen. Most predators who have the unfortunate luck of getting sprayed by a skunk will never want to go near one again. The smell is incredibly potent and can linger for months.

So the skunks’ white stripes act as a warning sign: stay away unless you want to be sprayed. This is an effective way of deterring predators, since most animals will avoid anything that smells bad.

Skunks have lots of predators in the wild, but generally they manage to reproduce at a higher rate than their predators can take them down. While their noxious spray is their most well-known defense mechanism, skunks also use their fur coloration and sleep in dens to protect themselves from getting eaten. Skunks are here to stay!

As for humans, we kill lots of skunks, though mostly inadvertently. Cars are the biggest threat to skunks, followed by people who try to kill them because of the smell. If you see a skunk on the road, please be careful! And if you’re trying to get rid of one, there are much more humane ways than killing it. Skunks are just doing their best to survive in a world that’s hostile to them.

Skunks are generally thought of as nongame animals, meaning you can’t hunt them for fun.

If you see a wild skunk, it’s best to just leave it alone.