There are over 2700 species of snakes all around the Earth, and all of them, with no exception, are carnivores.

Paradoxically to their carnivore menu, most snakes have no teeth; therefore, they do not chew their food but swallow it whole.

That is why snakes adapt the size of their prey to their own size: smaller species and young snakes will hunt small birds, chicks, and eggs, while bigger species of snakes will attack larger birds or animals.

However, even the giant and large snakes will avoid certain birds, such as falcons, owls, hawks.

These birds are big enough, have the necessary tools to win a fight even against a giant snake, and are also snakes’ natural predators.

Thus, a snake, be it a huge one, will gladly take another option if it has it, instead of engaging in a fight with a predator bird, like one of those I mentioned above.

Further, let’s see what snakes can and will enjoy a tasty, juicy bird as a meal and what technique they use in the hunting process. 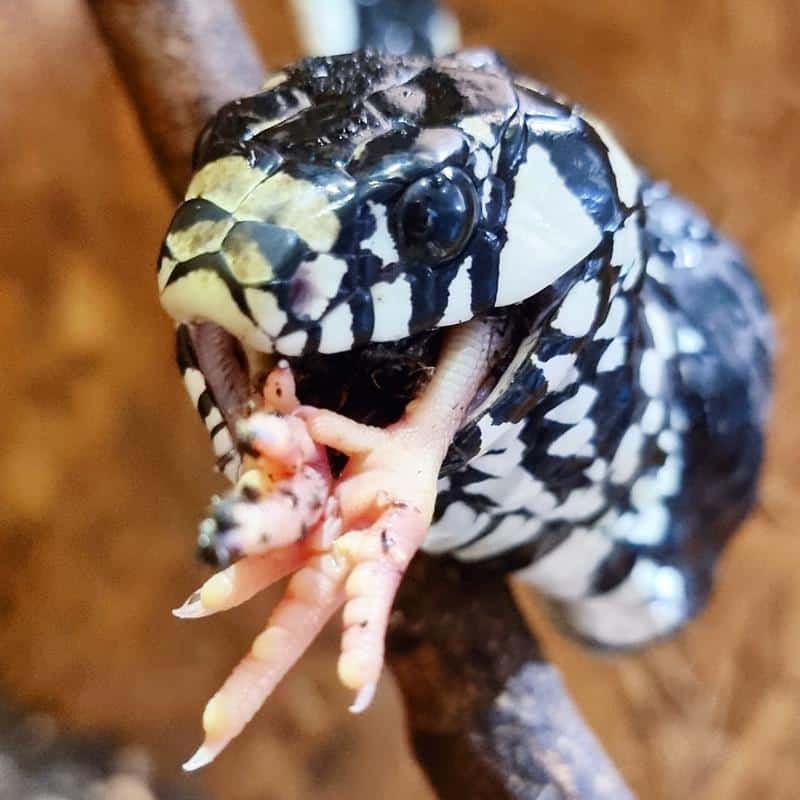 The Chicken Snake is a shinny black snake, measuring between 90 and 180 centimeters,  including the tail (only a few specimens grow over two hundred centimeters; the longest Black Rat Snake measured was 230 centimeters).

The Black Rat Snake has a white or creamy mandible and throat, with a black and white pattern on the belly that turns into a uniformly grey towards the tail.

Since it is nonvenomous, the Black Rat Snake kills the bird coiling its body around the bird’s body and squeezing it until the prey is dead (suffocation).

Although it won its name due to its appetite for young chickens and chicks, the Black Rat Snake menu also involves rodents, lizards, frogs, and, of course, chickens’ eggs.

The younglings are way more vulnerable to predators such as raccoons, foxes, and even domestic cats, while the adults are known to have very few predators besides the humans (hawks and great horned owls). 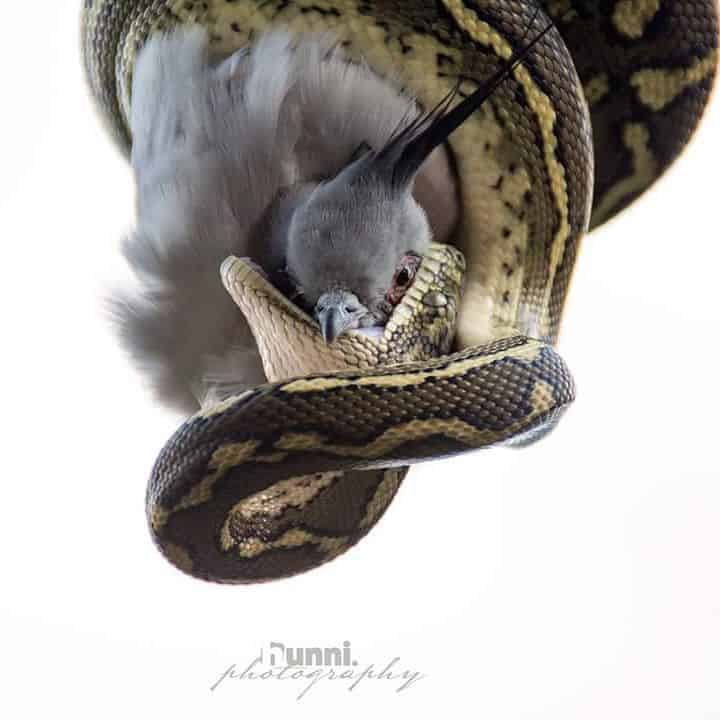 The Burmese Python (Python bivittatus) is one of the most extensive species of snakes, nonvenomous, dark-colored, with brown patches surrounded by black borders all over its back.

Although specimens of seven meters have been reported, they have not been confirmed, the confirmed average length of a Burmese Python being around five meters.

The minimum size of the adult Burmese Python is 2.5 meters (in captivity), with an average of 3.7 meters (in the wild), but with specimens known to reach up to 5.74 meters.

The Burmese Python can be semiaquatic and stay in the water for up to thirty minutes; therefore, it lives near swamps, marshes, jungles, river valleys, woodlands.

However, it prefers to stay on the land and, due to its prehensile tail, which makes it a great climber, the (young) Burmese Python can often be seen in the trees.

As it grows older, bigger, and heavier, the snake reduces most of its movement and activity to the ground, especially since it has a “sit and wait” hunting strategy:

The Burmese Python has poor eye-sight, so its hunting skills are based on the animal’s heat sensors along the jaws and some chemicals in its tongue that helps it stalk its prey.[1]

The Burmese Python’s diet is formed mainly from birds and mammals, which catches them by grasping their heads with its sharp teeth and then coils around the animal’s body until it kills it. 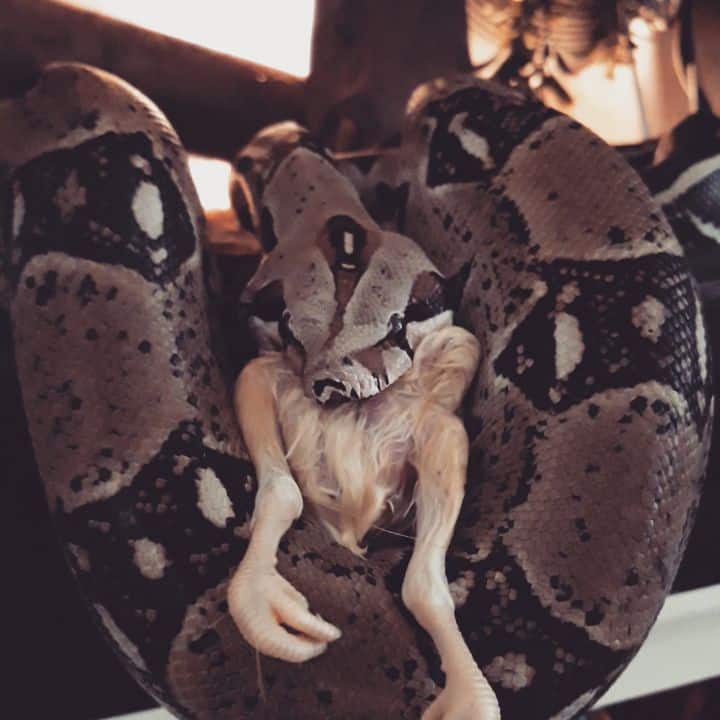 Compared to its relative above, the Burmese Python, and other large snakes species, the Red-Tailed Boa is relatively middle-sized, with a length between 0.91 and 3.96 meters, and a weight up to 27 kilograms (very rarely some specimens reaching up to 45 kilograms).

The Red-Tailed Boa seems to wish to compensate for its smaller size with a spectacular and varied coloring, differing from one subspecies to another and even between individuals from the same subspecies:

Adaptive to the environment the animal must hide in, the coloring of Common Boa can be brown, grey, silvery grey, cream, or red, with enigmatic and hypnotizing patterns of circles, ovals, hexagons, and jagged stripes.

The Red-Tailed Boa hunts from dusk to dawn and, although it is a terrestrial animal, where it feeds on small mammals, the snake also climbs into the trees to hunt birds.

Typically to a constriction species, the Red-Tailed Boa grasps its victim by the head and then coils its body around the prey’s body until it kills it.[2] 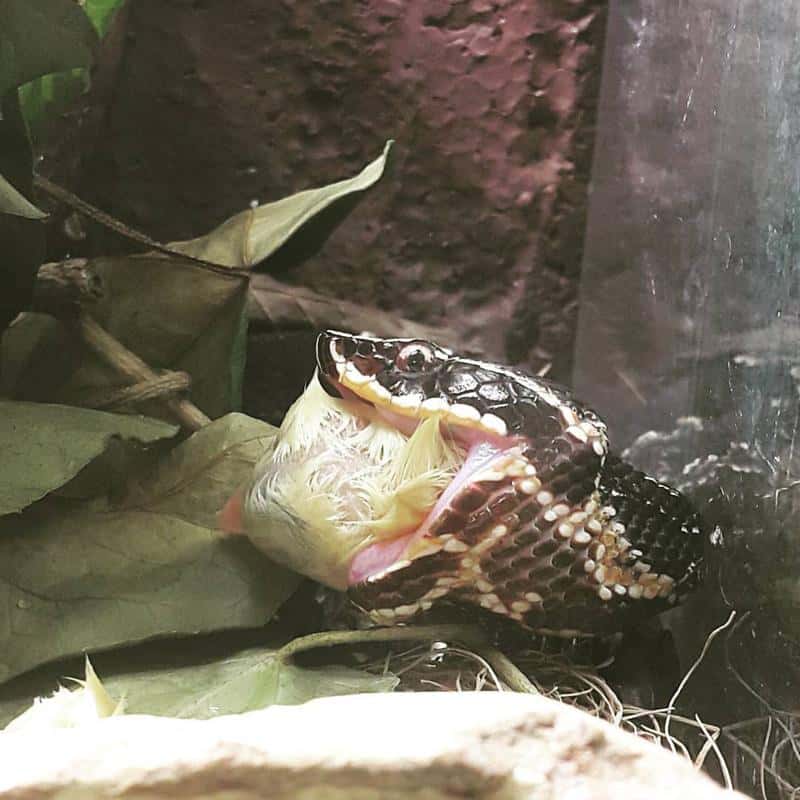 The Taylor’s Cantil (Agkistrodon taylori) is a venomous pitviper intrinsic to northeastern Mexico, also known as Metapil (in Spanish) or the Ornate Cantil.

The most common name, Taylor’s Cantil, was given in honor of Edward Harrison Taylor, an American herpetologist from Missouri.

Although the Tylor’s Cantil can sometimes be found near small bodies of water, it prefers tropical deciduous forests, arid thorny woodlands, grasslands, and stony hills.

Taylor’s Cantil is a medium-sized viper, with body length (tail included) between 64 and 90 centimeters, and with some individuals reported as reaching up to 96 centimeters.

Taylor’s Cantil coloring is dark-brown, with orange, yellow, or white stripes and a yellow tip tail (during youth); as the snake gets older, it loses the yellowtail, and all its colors fade, the animal turning significantly darker with age.

With a menu mainly containing amphibians, lizards, birds, and mammals, the hunting strategy of Taylor’s Cantil involves a quick strike to capture the prey then use the fangs and venom to kill it.

The yellow tip-tail, being a different color than the rest of the body, helps the young snakes hunt easier until they reach maturity when they lose it.

The young Taylor’s Cantil raises its yellow tail about four centimeters above the ground and wiggles it to lure prey closer so it can strike.[3] 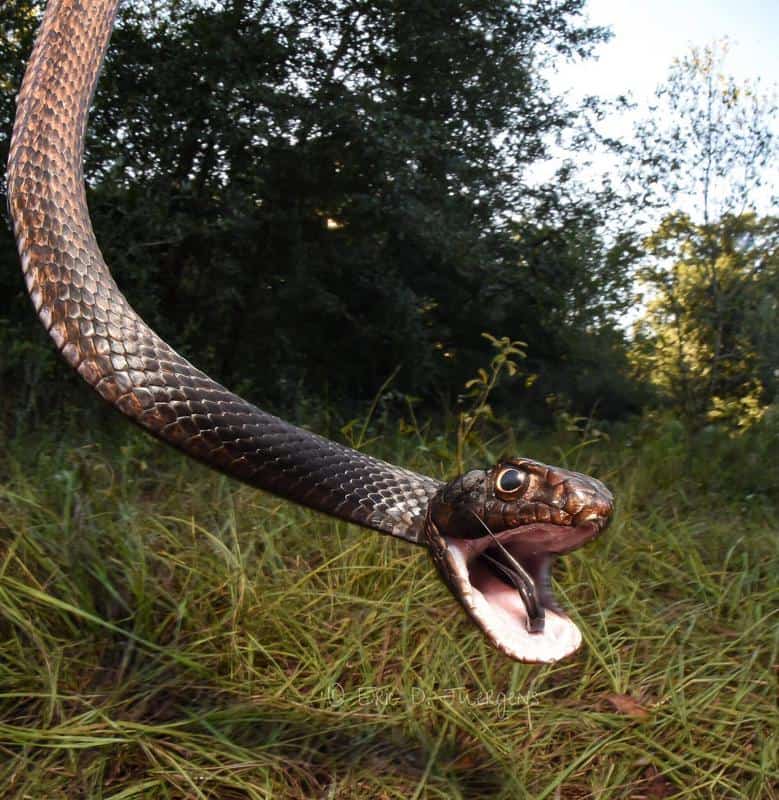 Coachwhip Snake (Masticophis flagellum) is a nonvenomous snake native from Mexico and the United States, also known as the Whip Snake due to the pattern of scales resembling a braided whip.

Depending on subspecies, the length of Coachwhip Snake may vary between 127 and 235 centimeters; however, the animal has a thin body, weighing only between 1.2 and 1.8 kilograms.

The coloring of Coachwhip Snake is adaptable, being an excellent camouflage that starts with a black head and fades gradually in dark brown, light brown, tan, pink, and even white, depending on the animal’s environment.

The Coachwhip Snake feeds on lizards, amphibians, insects, and even other snakes, and, despite its slender body, the serpent also feeds on rodents and small birds.

Unlike most other snakes, the Coachwhip Snake is active only in the daytime, most often seen in the most burning days of the summer, when most of the other snakes are usually inactive.

Not only does the Coachwhip Snake enjoys the hot weather, but it also hunts during the day, actively chasing its prey, usually with the head up in the air.

Although a nonvenomous snake, the Coachwhip Snake does not coil around its prey to kill it before eating; it only grasps it and holds it with its jaws while consuming the prey alive.

The Coachwhip Snake has excellent eyesight, and it is one of the fastest snakes, reaching a speed up to 6.43 kilometers per hour.[4] 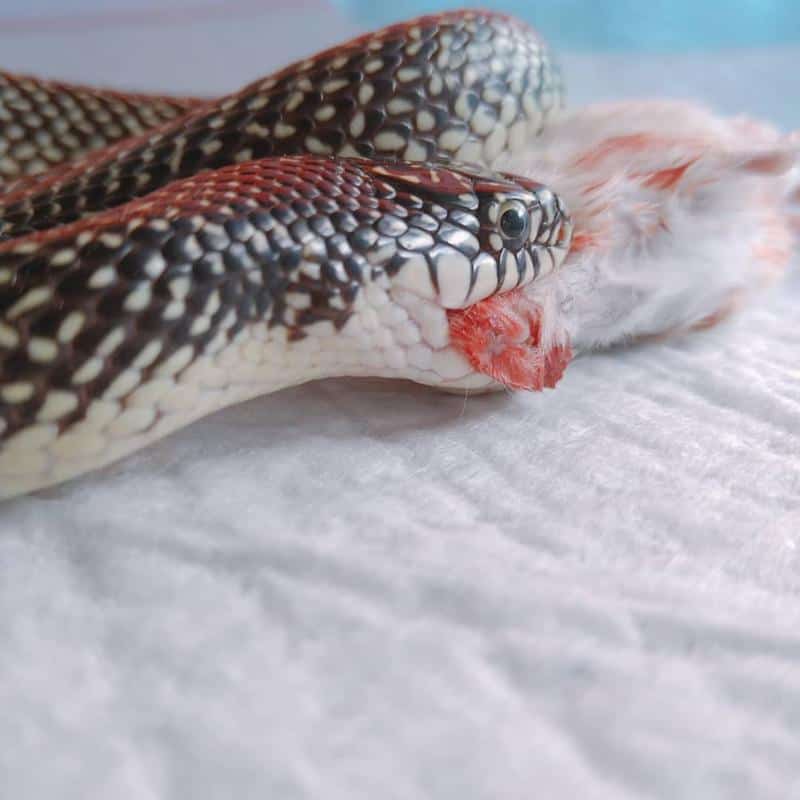 The Speckled Kingsnake (Lampropeltis holbrooki) is a nonvenomous, medium-to-large snake (with an average length of approximately 120 centimeters and a record length of 180 centimeters), native from the United States of America.

The Speckled Kingsnake, also known as the “salt-and-pepper-snake”, gained its name due to its dark coloring, sprinkled with yellow-white dots, one in the center of nearly every dorsal scale.

The dark ground color varies from dark brown to blue-black, the belly of the Speckled Kingsnake is yellowish, with black marks, and the eyes of the adult snakes are usually red.

Like Coachwhip Snake, the Speckled Kingsnake is a diurnal animal that actively chases its prey, similar to how hounds sniff the prey; but the snake relies on their forked tongue for “sniffing”, not their nose, like dogs do.

However, the Speckled Kingsnake, active from April to October, is not a big fan of hot summer days (compared to the Coachwhip Snake) and tries to hide from them.

So in the summer’s burning days, it also becomes active during the night, hunting for whatever they find: eggs, small reptiles, small amphibians, small mammals, and, of course, birds.

Sometimes, the Speckled Kingsnake feed on fish and even on other serpents, venomous and nonvenomous.

Like most nonvenomous snakes’ species, the Speckled Kingsnake grasps its prey, squeezes itself around it, and kills it before eating it. 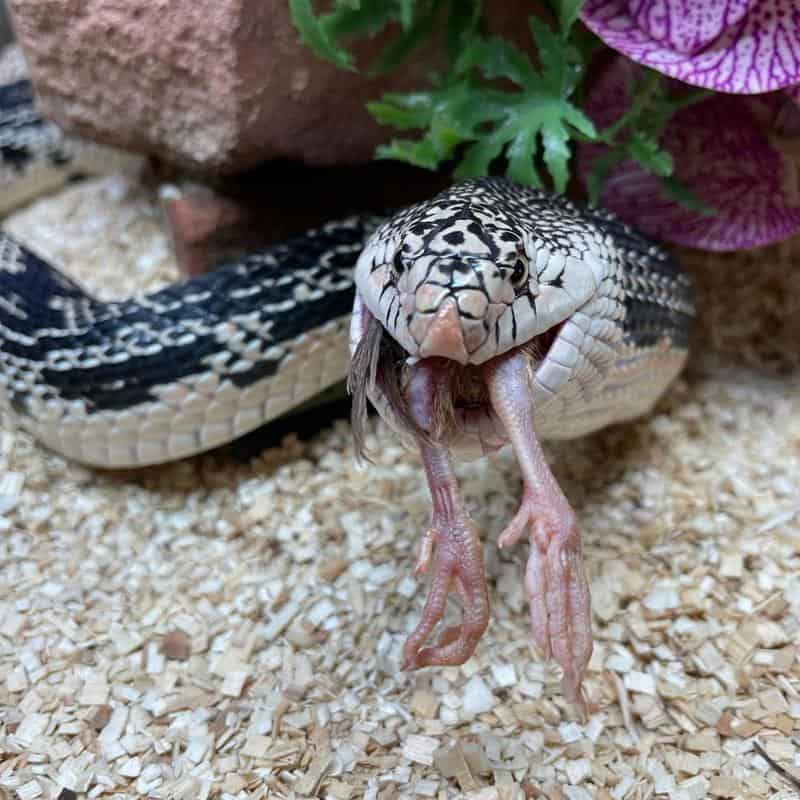 The Pine Snake (Pituophis melanoleucus), also known as the Bullsnake, Pilot Snake, or Carpet Snake, is a nonvenomous serpent from the southeastern side of the United States.

The Pine Snake is a medium-sized snake with a robust body build, measuring between 120 and 230 centimeters (tail included) and weighing between 1.8 and 3.6 kilograms.

Fading from darker (near the head) to lighter (near the tail), the background coloring of the Pine Snake varies from white to light grey or yellow, and it’s covered with deep black, brown, or reddish-brown patches.

This color pattern is meant to serve as camouflage for the animal’s terrestrial environment, even though the Pine Snake sometimes climbs trees and small shrubs.

Although it’s an excellent burrower and spends most of its time underground, the Pine Snake is a diurnal snake with few subspecies active at night.

The Pine Snake has been spotted to take sun morning baths to raise its body temperature.

As cute as that sounds, let’s not forget that the Pine Snake is still a predatory animal that feeds on various types of hunt: birds, eggs, amphibians, reptiles, rodents, and small mammals.

As a nonvenomous, the Pine Snake uses the constrictors’ technique of coiling and suffocating to death the prey before swallowing it whole.[5]

When a Pine Snake is angry or in danger, a cartilaginous crest in front of its vocal cords helps the snake produce a hissing about which scientists speculate it would imitate the hissing of the poisonous rattlesnake.

Snakes are predator animals that need to eat meat to survive, and, especially in youth, when their size does not allow them to go for bigger prey, they eat birds also.

However, not all snakes species eat birds, first because some snakes are just too small to feed on birds (such as Garter snakes) or because they would prefer other serpents and lizards for a meal (as Cobra does).

Nonvenomous snakes use the grasping of the prey as a hunting technique,  coiling its body around its victim until it’s dead and then swallowing it whole.

Although most bird-eating snakes are nocturnal, some diurnal species love taking sunbaths to warm up their bodies in the morning.

The feeding behavior of a snake will depend on the animal’s environment, age, hunting skills, and the prey’s size (reported to its size).