Frogs can be found in watery habitats all over the world, from tropical rainforests to temperate swampy zones to cold, boreal woodlands. They are regarded as a key species in the ecosystems they inhabit. As tadpoles and froglets they graze on algae, helping to prevent the freshwater system from becoming dominated by algae or suffering an algal bloom. As adults they feed on mosquitoes, helping to reduce the numbers of these disease-carrying insects. At all stages of their life cycle they provide an important food source for many different species, some of which we’ll be exploring today.

This group of amphibians has been in the spotlight in recent times due to the dramatic declines frogs are facing – over 30% of frog species are currently threatened with extinction. They are vulnerable to habitat destruction from land clearance for agriculture and deforestation; invasive species which outcompete them, consume them at a quick rate, and pathogens; climate change which can alter environmental factors like temperature and humidity; pollution – as amphibians which breathe through their skin and spend much of their time in the water, frogs are particularly vulnerable to both water and air pollution; diseases like the destructive chytrid fungus.

Therefore, it is critically important to study frogs and establish their complete ecology in order to save them and conserve a vital component of ecosystems globally. So, today we’ll be exploring the question “which animals feed on frogs?”. Perhaps a better version of this question would be “which animals do not feed on frogs?” – frogs have so many predators! From small mammals like weasels to larger carnivores like raccoons and ocelots, from lizards and snakes to alligators, from wading birds to birds of prey, and even from small insects to humans, it seems like the list of frog predators goes on and on…

But first, let’s discover a little more about frog ecology: what makes them a good food source for many species? Aren’t they poisonous – and if so, why and how could anything eat them?

Frogs As a Food Source

First of all, it makes sense that many animals catch and eat frogs – they are an important source of protein in many environments, and relatively easily for animals to digest and even swallow whole due to their soft bodies. They also contain vital vitamins and minerals like omega-3, potassium, and vitamin A.

These soft-bodied, slimy creatures are often hard to spot due to their camouflaged colors and their swift hopping movements. A common understanding people have when it comes to frogs is that they are poisonous and therefore dangerous even to touch. Let’s discover more about toxic frogs and some other methods employed in the fight against predators.

It is true that some frogs exude toxins from their skin, often obtained through their consumption of toxic plants or animals. One extreme example of this is the Poison dart frog which ingest poisonous insects like termites and mites in the rainforest and secrete a dangerous toxin called lipophilic alkaloid. This makes them deadly or at least harmful to predators, thus giving them an effective defense mechanism against predation.

Some species of frog are even venomous – two species, Greening’s frog and Bruno’s casque-headed frog, have been found to possess spines in their skulls which they effectively use to headbutt a predator and inject toxins directly into them. Ingenious! 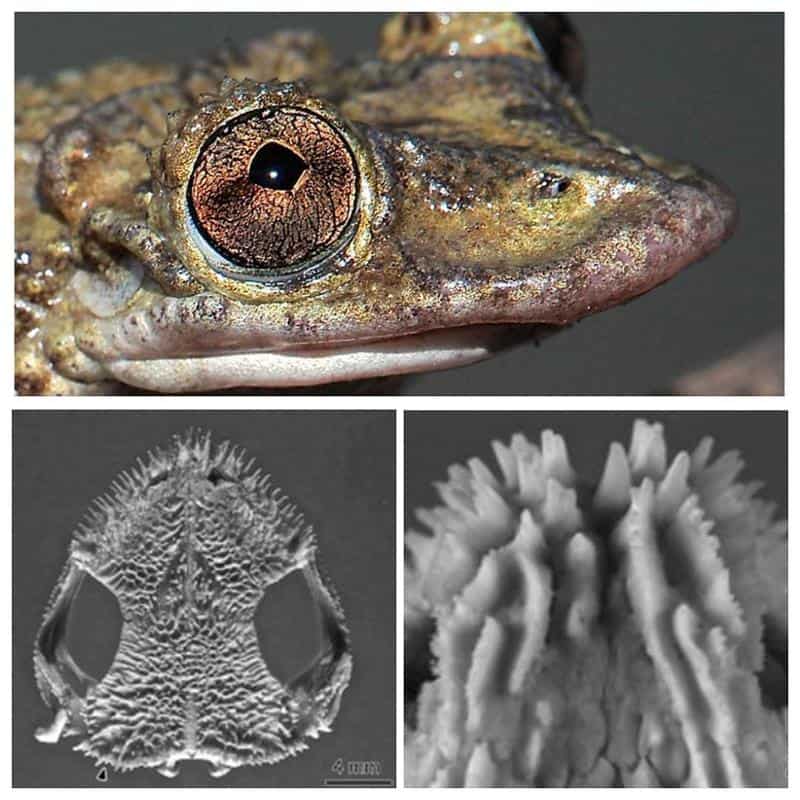 Camouflage is a common trait amongst frogs, which are often coloured shades of brown or green to blend into their environments. However, some frogs display bright colors as a warning sign to predators that they are poisonous. Some of these eye-catching species are not poisonous but simply mimicking the poisonous ones to stop predators from trying to eat them.

The strong back legs frogs are well-known for also help them to leap away from danger at high speeds. Otherwise frogs may dive to the bottom of a waterbody to avoid predation from above, or bury themselves in mud to escape potential predators.

Now we come to the main topic of the day, which animals eat frogs? The list is long but we will be focusing on some of the main predators of frogs. Although many animals predate frogs at all stages of their life cycle, frog predators can be roughly split into 2 groups: those which eat adult frogs, and those which eat young frogs (including eggs, tadpoles and froglets).

Many carnivorous mammals include frogs in their diets, especially those which lead semi-aquatic lives such as mink, otters and water shrews. Aquatic mammals like otters will also feed on frogs as a supplement to their primarily fish-based diet.

Small terrestrial carnivores like weasels and stoats are voracious predators and have both the speed and skill to easily catch a frog. Larger carnivores such as ocelots and coyotes feed on frogs when they get the opportunity. These predators will mostly focus on catching other smaller mammals but may hunt a wider array of prey which often includes birds, frogs and fish.

Opportunistic omnivore species like raccoons, skunks and possums will scavenge around and take advantage of any good-sized meal. As well as foraging for nuts, fruits, insects and small mammals, they will not pass up the chance to catch and eat a frog.

Very many bird species will catch and eat frogs. Large wading birds like cranes, herons and storks inhabit much the same kind of habitats as frogs. They can often be found in the shallows, employing a sitting-and-waiting technique in their pursuit of live prey. This is effective in catching frogs which may not notice the patient and still birds and will swim or hop right under their bills.

Waterbirds and seabirds like gulls, ducks, and terns may also predate frogs, especially diving birds which can scout and catch frogs underneath the water.

Corvids like jays, crows, and ravens consume an incredibly diverse diet including small mammals, insects, worms, birds, eggs and plant materials like grains, seeds and fruits. They will go after any smaller prey item which certainly includes frogs. 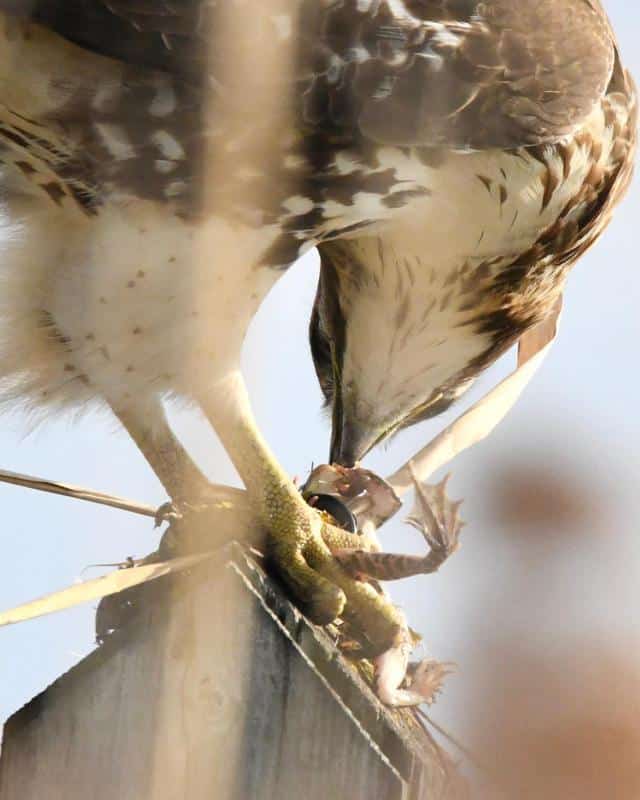 Birds of prey like kites and hawks are specialised to pinpoint and swoop in on smaller animals, often concentrating on birds, rodents or fish depending on the bird of prey species. Many will target and eat frogs, pulling them apart before swallowing bite-sized chunks down. Some species which have regularly been observed eating frogs are the Hook-billed kite (Chondrohierax uncinatus) and the Red-shouldered hawk (Buteo lineatus). Owls are another common frog predator. Nocturnal owl species have a particular advantage when it comes to frog breeding season. During this time frogs are very active at night, vocalising and gathering at mating sites. This can be a rich food source for resourceful owls like the Barn owl (Tyto alba). 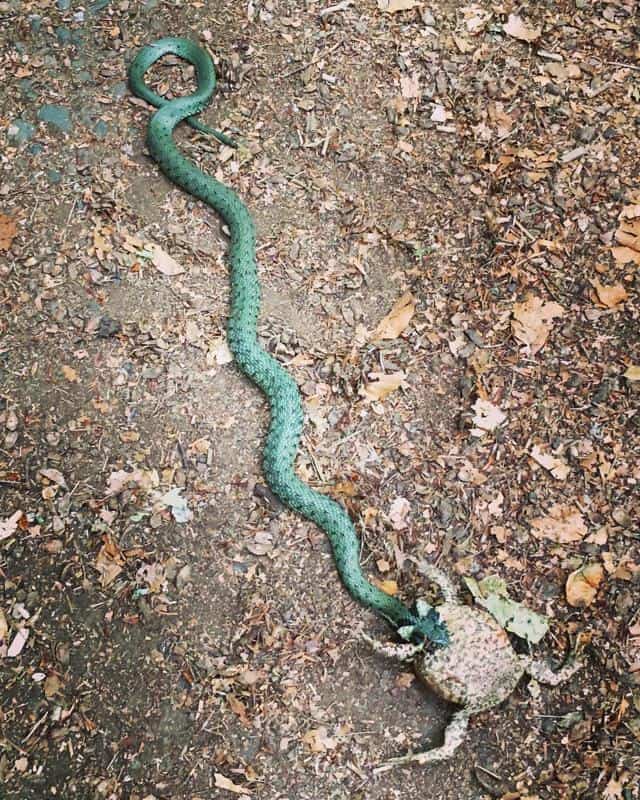 Frogs make a good meal for snakes as they are soft-bodied and easy to swallow whole. In some areas like subtropical forests, snakes are the main predators of frogs. Some wily snake species have even developed immunity against powerful toxins secreted by poison dart frogs, such as the species Erythrolamprus epinephalus.

As fierce predators, adult alligators have no problem in snapping up a frog, especially since they share many of the same freshwater habitats.

Similarly, some larger species of carnivorous lizards like Iguanas, and salamanders like the Tiger salamander (Ambystoma tigrinum) are significant frog predators. There are even some carnivorous turtles like Box turtles and Snapping turtles which consume frogs alongside their main diets of fish and aquatic invertebrates. 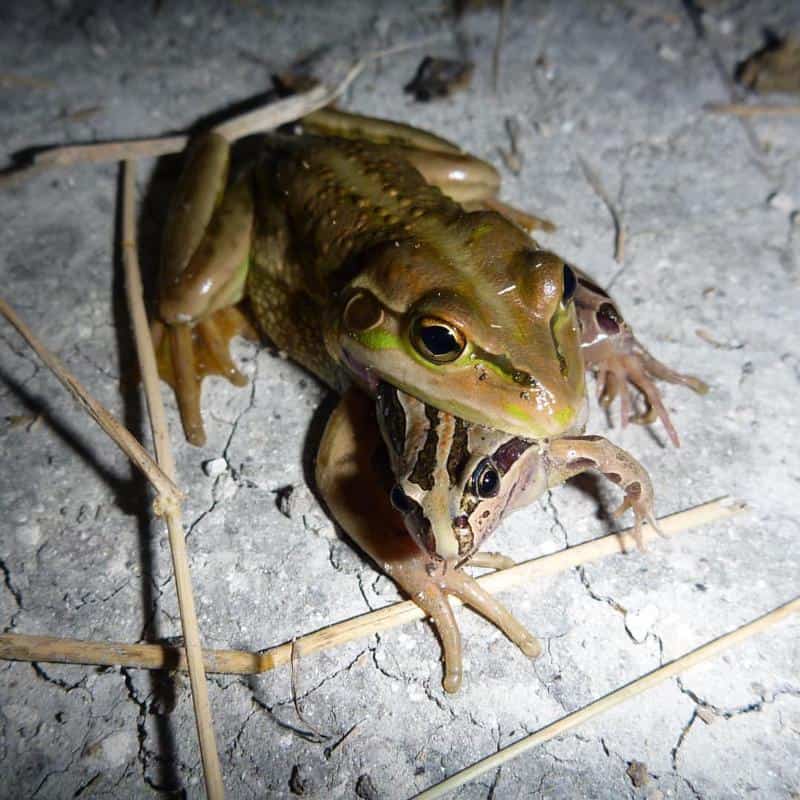 Yes, frogs eat frogs! Some larger species of frogs will eat smaller species, or even eat individuals of their own species. One study found that it’s a lot more common than previously thought and that, in general, frogs are more predatory and opportunistic than popularly believed. It has also been observed that larger, invasive species of frogs can be a big problem for native frogs. For example African clawed frogs and Cane toads will prey indiscriminately upon other frogs.

Perhaps surprisingly to some of you (depending on where you live), frog farming is a massive industry and there are frog farms in many areas of the world. Additionally, in some places frogs are harvested from the wild. This can lead to over-exploitation of wild species, and the transportation of edible frog species to different areas can lead to problems including invasive species entering new areas, and transfer of disease to native frogs.

More than 200 million frogs are harvested as human food every year. Some of the most popular species of edible frogs are Bullfrogs, Pigfrogs, and the Giant ditch frog, as well as the aptly named Edible frog.

Many of the afore mentioned animals will also take the opportunity to eat frog eggs (also called frogspawn), tadpoles and froglets, apart from possibly the larger mammals which may not deem them a big enough nutritional reward for the effort of catching them.

Newts, another group of amphibians, prey upon tadpoles and frogspawn as a regular part of their diets. They are usually small, often smaller than adult frogs, hence why they would not be able to catch or eat an adult frog.

One common predator of frogspawn, tadpoles and froglets is dragonfly larvae. At the larval stage dragonflies are unstoppable predators, and can even the apex predator of small pond and stream systems. Dragonfly larvae mostly feed on aquatic worms and other aquatic larvae, but will also go for young frogs and even small fish. Adult dragonflies will feed on frogspawn if they get the opportunity, when it is close to the edge or within reach from a reed they can perch on.

Leeches are not technically a predator, but are a parasite of frogspawn, tadpoles and froglets, latching onto these young frogs and draining them of blood. Because they are so small, this can lead to the death of spawn and tadpoles.