Frogs are sometimes found in our surroundings minding their little business of seeking insects that’ll serve as their dinner. Aside from their quite disturbing croaks, they don’t seem to be significant troublemakers. Indeed, these leaping creatures typically live their life as though no human is watching when they’re left undisturbed.

On the flip side, humans are social animals that may desire companionship from other creatures, including frogs. In this case, humans may nurture and feed these companion animals. The idea of owning a pet baby frog begs the question, “what do baby frogs eat?”

In light of this, this guide explores the nutrition of immature frogs. We hope this enlightens pet owners and other individuals on the proper diet to offer frogs and the right way to do so.

A Quick Recap of Frogs, Their Evolution, and Breeding

Frogs are smooth-skinned, tailless, amphibian vertebrates belonging to the order Anura. In a stricter sense, the word “frogs” refers to members of the family Ranidae, usually known as “true frogs.” Still, the term may distinguish leaping smooth-skinned anurans from toads.

Quick fact: Do you know that frogs and toads can be regarded as different creatures? While frogs are leaping smooth-skinned anurans, toads are squat, warty (rough-skinned), and typically hop. Both amphibians are tailless and belong to the same order Anura.

Generally, frogs possess bulging eyes, no tail, and powerful, webbed feet adapted for leaping and swimming. Additionally, their skins are also smooth and moist. They mostly live in the water, but some are terrestrial, dwell in burrows, or are arboreal.

A 2017 phylogenetic analysis suggested that frogs and toads diverged from lobe-finned fishes around the Late Carboniferous period, about 300 million years ago.

On most occasions, female frogs are larger than males. This tendency favors the breeding mode of frogs.

Their breeding occurs annually in freshwaters, such as swamps and puddles. In their sexual act, known as amplexus, the male grips the female from behind and releases sperm over the eggs as she expels them.

A female frog lays about a few hundred to thousands of eggs, depending on the species. The eggs drift off in clusters, sheets, or strings, on the water body. Subsequently, they may attach to the stems of water plants or sink in the water.

Depending on the species, the tadpoles mostly hatch within a few days or about a week and complete their metamorphosis into a frog within two months to three years (36 months).

On the contrary, some tropical frogs deposit their eggs on land rather than water. These eggs hatch into froglets instead of tadpoles.

Meanwhile, the key events that take place during the metamorphosis of tadpoles into frogs include:

Life Cycle of a Frog 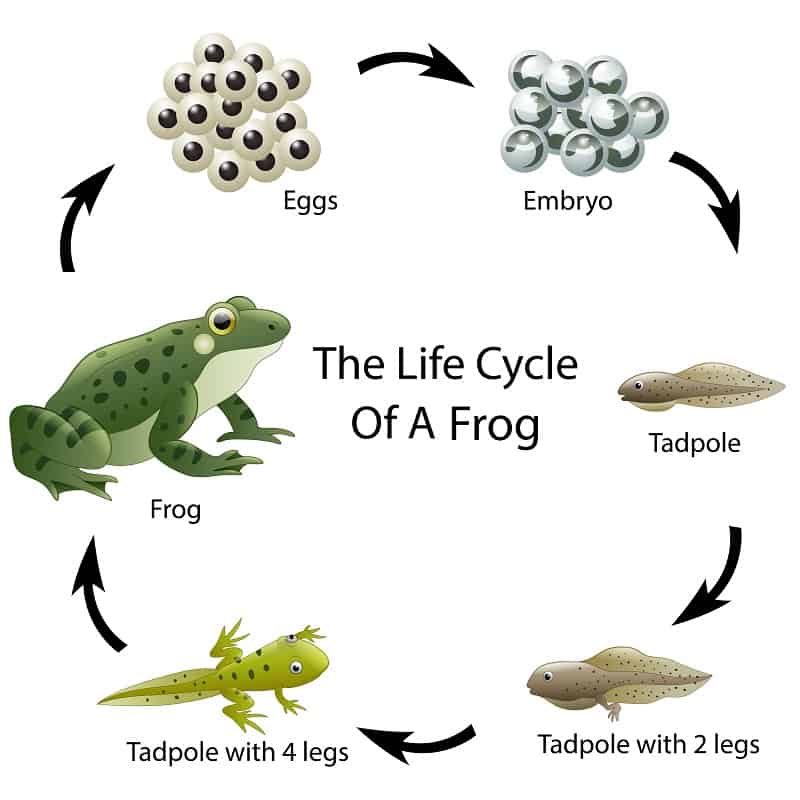 The diet of frogs differs at the different stages of their life cycle. Hence, it’s crucial to reflect on the lifecycle of a frog when analyzing the feeding habits of baby frogs. The frog’s life cycle can be primarily divided into four phases, including:

Nutrition of Baby Frogs: What Do Baby Frogs Eat and Drink?

For a sufficient perception of the nutrition of baby frogs, we’ll treat the nutritional habits based on the first three stages of a frog’s life cycle.

Shortly after the tadpoles hatch from the eggs, their composition includes only a mouth, poorly developed gills, and a tail. They initially feed on the remnants of their yoke, which is situated in their gut. About 7–10 days from the day of hatching, they start swimming around and feeding on algae.

Skin grows over the gills in approximately four weeks, and the gills eventually cease to exist. Around this time, the tadpoles acquire tiny teeth, which enable them to mash food into watery oxygenated particles. They also possess long coiling guts that assist them in digesting and absorbing usable nutrients from their petty diets.

About 6–9 weeks from hatching, the tadpoles grow little legs. Their body also elongates, and their head becomes more noticeable. At this point, their nutritional apparatus and diet may improve to include more significant items, such as dead insects and certain plants.

By the 9th week, the creature appears to be a young frog with a long tail.

In the 12th week, the immature frog has only a little tail stub and resembles a younger rendition of the adult frog. Eventually, the critter that was once a tadpole leaves the water. The term “baby frog” may apply to a frog in this phase of the life cycle.

What Type of Food Do Baby Frogs Eat?

Froglets consume small invertebrates, such as worms, flies, bugs, crickets, grasshoppers, and spiders. They could also eat veggies like lettuce.

What Do Baby Frogs Eat in the Wild?

Wild frogs are mainly carnivores. They feed on insects that are available in their territories. In addition, they may consume plant leaves and roots, water striders, and mosquito larvae.

Meanwhile, the amount of food they require depends on their size and species.

Frogs, like bullfrogs, have been observed eating relatively large prey, including tarantulas, mice, snakes, birds, and even other frogs.

Another observation regarding the nutrition of wild baby frogs is they don’t feed on dead insects. When captive wild frogs are attempted to be fed, they appear to enjoy eating live insects and worms but ignore dead insects.

What Do Baby Frogs Eat in Captivity?

The diet of baby frogs in captivity may differ from their wild counterparts.

What Insects Do Baby Frogs Eat In Captivity?

Wingless fruit flies are particularly advantageous because they’re easily accessible, and you can personally culture them. They’re also relatively small, and you can purchase them in various pet stores.

A pinhead cricket is a freshly hatched cricket between 1 to 3 days old. Pinhead crickets are a decent choice because they are similar in size to fruit flies, thus making them easily consumable. On the flip side, they aren’t always readily available at pet stores because their production process is time-consuming.

Again, you won’t be able to use pinhead cricket to feed captive baby frogs for long as they grow big sooner than fruit flies. However, this penchant can also turn out to be a benefit when your baby frog grows and begins to eat larger prey.

What Do Baby Frogs Eat Other Than Insects?

Other prey that baby frogs eat aside from insects includes small earthworms (What do earthworms eat), such as tiny redworms.

When the captive baby frog becomes sufficiently big, you may introduce them to a diet of small mealworms. It’s been noticed that not all frogs enjoy eating mealworms. Regardless, you can check if your baby frog eats them to know the next step to take.

Caution: Never force your baby frog to eat what it doesn’t like.

Also Read: What Do Mealworms Eat? (With Pictures And Video) 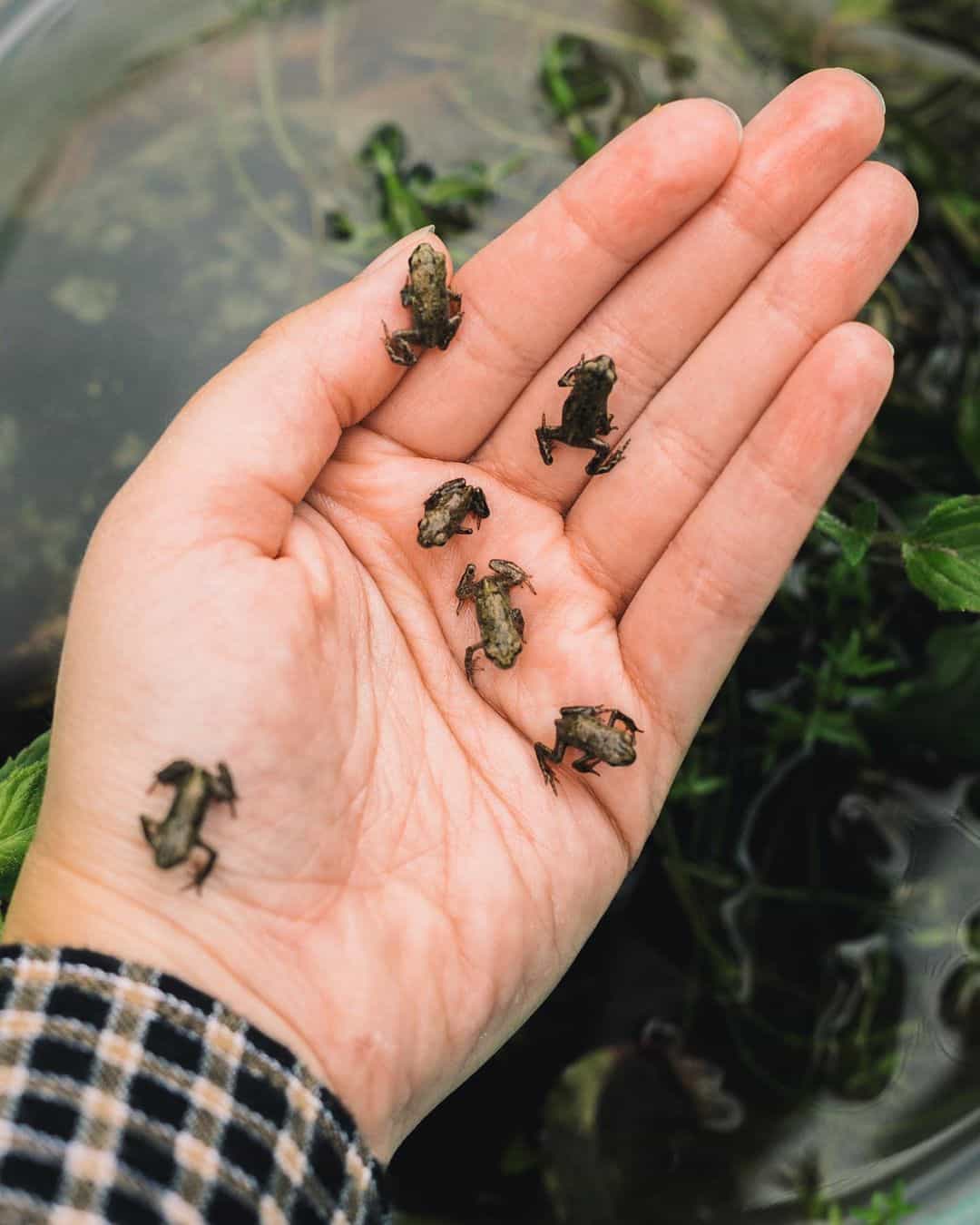 Relatively recently, frogs have become one of the most popular exotic pets. These amphibians are put in secure enclosures, catered for, and fed by their human pet owners.

However, owning a pet frog is more of a hobby than a source of companionship because these animals aren’t very interactive like dogs and cats.

Some of the best frog species primarily kept as pets include:

What Do Baby Frogs Eat as Pets?

If you have a tadpole as a pet, you can feed it with the following items:

Alternatively, you may offer your pet tadpole frog and tadpole pellets. These substances contain the essential nutrients tadpoles require to grow.

Meanwhile, you can feed pet froglets with small invertebrates, such as:

One guideline to follow when feeding a baby frog is making sure the food is small enough to prevent choking hazards. To avoid issues, you may choose only to offer your pet baby frogs food shorter than the distance between their eyes.

You should also consult a vet or pet frog expert each time you intend to add a new food to your pet frog’s diet.

It’s also vital to keep caught wild bugs and insects away from your pet baby frogs because these creatures may contain pesticides that may be harmful to your baby frogs.

In addition to food, it’s advisable to provide your pet froggies with some essential vitamins and minerals as supplements. Chiefly, calcium supplements are critical to your pet baby frog’s health. Your baby frog can obtain this mineral from frog or reptile calcium powder.

Another notably beneficial practice to perform when feeding your pet froggies is gut-loading their prey before offering them. This procedure involves providing the prey with a nutritious and vitamin-rich diet, enabling your pet frog to meet its nutritional requirements quickly.

Usually, most stores that retail pet baby frog food don’t gut-load the prey. Therefore, you may have to do it yourself.

How Often Should You Feed Your Pet Baby Frogs?

Since baby frogs are still growing and developing, they need to be fed more frequently than adults. You may consider feeding your pet baby froggies twice a day.

Many frog species obtain water and electrolytes through their skin rather than drinking through their mouths. That said, the water you provide your pet baby frogs should be clean, fresh, and non-chlorinated.

When feeding your frogs, endeavor to have as little contact as possible. This is important because the oil in our skins can disrupt the balance of your frog’s skin mucosal layer.

Should You Give Your Pet Baby Frog Unconventional Food?

Understandably, you may be out of ideal pet baby frog food options in some cases, tempting you to offer your pet unconventional food. Let’s see how safe this is.

What Kind of Food Do Baby Frogs Eat?

As previously stated, tadpoles typically eat algae, pellets, and plant parts they can digest. On the other hand, froglets primarily feed on small insects, worms, and small shrimps.

Experienced pet owners may realize that baby frogs exhibit a relatively fast metabolism and quickly digest their food, sparking the need for more food. This tendency may prompt pet owners to contemplate other food sources to meet the nutritional requirements of their baby frogs.

What Do Baby Frogs Eat Besides Bugs?

Pet tadpoles are predominantly herbivores. Thus, they can thrive on veggies, such as boiled cabbage or lettuce. However, froglets are mainly meat-eaters.

What Animals Do Baby Frogs Eat Other Than Insects?

Apart from insects, you may feed your pet baby frogs with various edible worms, such as mealworms, wax worms, and red wigglers. Yet, offer worms only in small amounts or as part of a mixed diet. Mealworms contain a high amount of starch that may lead to liver damage.

It’s not recommended to give froglets human food as they may contain ingredients harmful to frogs.

Some food items you shouldn’t give your baby frogs as food include:

How Do Frogs Eat?

Exploring the method frogs use to eat their food is also relevant to the focus of this guide. Frogs apply various techniques when eating, depending on their species. For instance, some frogs use tongues when eating, while some don’t even possess tongues at all.

The tongues of many frogs are long, elastic, and sticky, enabling them to hold the prey firmly as it retracts back into the frog’s mouth. The swallowing of the whole food follows this event as frogs don’t chew when eating. More interestingly, frogs’ eyes assist the swallowing process.

On the other hand, some frog species possess teeth in their upper jaw, known as maxillary teeth, for gripping prey, preventing them from escaping. Therefore, these teeth don’t play a role in chewing or mastication.

How to Feed a Baby Frog?

Follow the following steps when feeding your pet baby frog:

Feeding a baby frog is an enjoyable hobby for pet owners, and watching it eat is a captivating sight for many. We hope the information contained in this article makes individuals who keep frogs as pets aware of the different nutritional habits of tadpoles and froglets.

We also hope you now know the foods that aren’t suitable for baby frogs. Overall, following this guide should ensure your baby frogs are healthy and grow to become adults appropriately.