Bulls are closely linked with human history. Cattle were domesticated around 6500 BC, and have since been farmed for meat, milk, and leather. Both cows and bulls have been seen as a symbol of power and fertility, or even worshipped in many cultures around the world.

Most people think of bulls as the regular cattle bulls seen grazing in pastures. In fact, there is a substantial number of male animals that can be called bulls. Usually the term bull applies to large animals including whales, walruses, elephants, camels, elk, giraffes, and hippopotamuses. Surprisingly, male crocodiles, rats and termites can also be called bulls!

But today, we’ll be focusing on the typical bulls which are members of the bovine family which includes cattle, bison and buffalo. These species are herbivores, grazing on a diet of all kinds of plants like grass, grains, herbs, and woody materials. Domestic bulls primarily feed on grass and hay, with supplementary grains, roughage, and silage.

We’ll cover the diets of wild and domesticated bovine bulls: cattle, bison and buffalo. We’ll also take a closer look at the biology of a bull. What makes bulls so strong and muscular when they only eat vegetation? Let’s find out…

Bulls are typically larger and more muscular than cows, their female equivalents. Most species or breeds tend to have a bony, ridged skull with extra protection above the eyes. These features help them during fights between males. 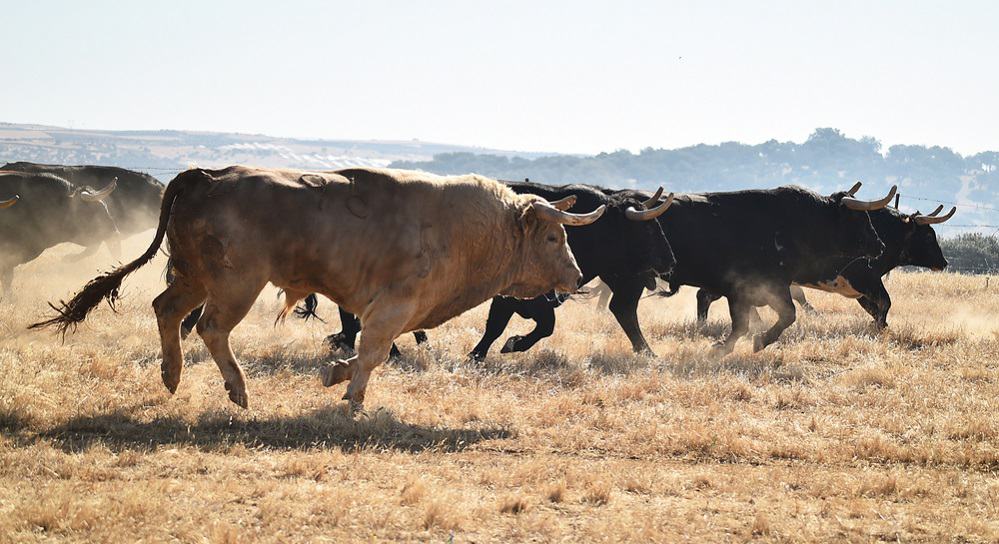 Wild bulls, and some domesticated cattle breeds will have horns. They use these weapons during fights for dominance over a herd of cows. Bovine species are highly social herd creatures and form tight bonds within a herd. Usually herds are formed of mostly cows, young calves and immature bulls. Once a bull reaches around 1.5 years old, they leave the family herd and group together in bull herds. Depending on the species, wild bovine herds rove around and mate with different bull herds. Alternatively, one bull may win dominance over a herd of cows and travel with them until another bull ends his reign.

Bovine herds are also highly communicative, calling to one another frequently when they are not within sight, or using body postures and facial expression when in closer range.

Bovine species are ruminant herbivores – they take hold of plant matter with their mobile lips and chew it using a side-to-side motion which helps to grind the food down before swallowing. Food is transferred into the rumen – the biggest “pouch” in the stomach. They them ruminate, also known as “chewing the cud” in an un-swallowing, re-chewing process where the food is transferred back up into their mouths.

Specialised gut bacteria help cattle to further break down the plant matter which allows them to squeeze as much nutrition out of vegetation as possible. This makes ruminant herbivores incredibly efficient at digesting and deriving goodness from tough plant matter which other animals are not able to do.

How Are Bulls So Muscular When All They Eat Is Vegetation? 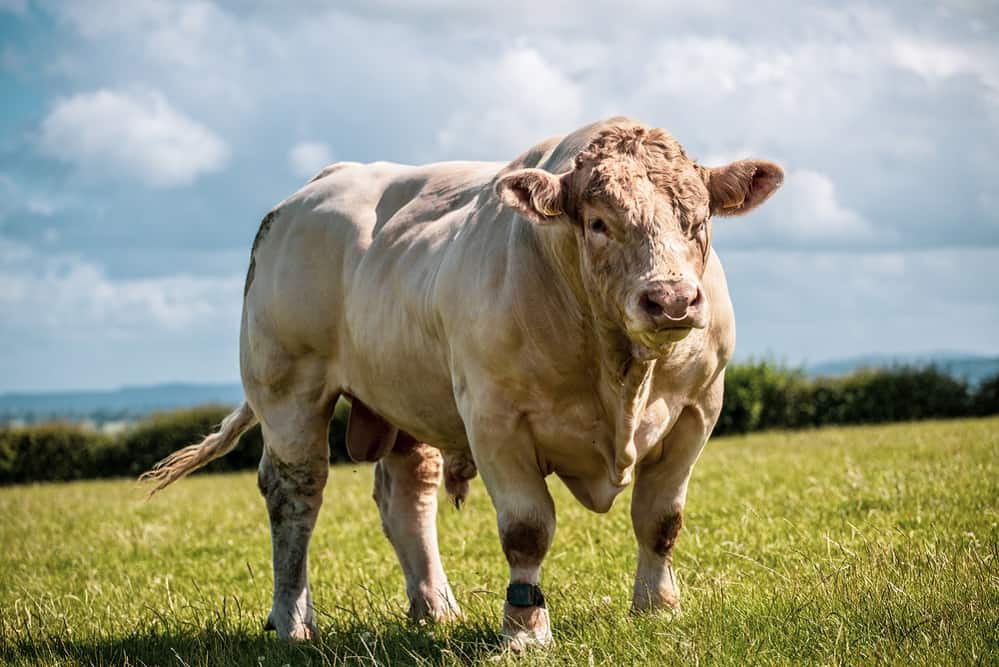 Great question! Their ultra efficient digestive system is the answer. When consuming vegetation, they also digest a large portion of animal proteins. These come from the gut bacteria or Protozoans found in the stomach. Protozoans help break down the plant matter and other “by-products” of the consumption of vegetation – bacteria and fungi.

The combination of proteins from bacteria, fungi, and dead protozoans are digested and absorbed by cattle. This rich protein helps bulls to build strong muscles required for roaming long distances, fighting other bulls, and protecting herds.

What Do Bulls Eat?

The main question of the day – what do bulls eat? They will consume more food than cows which they require to maintain their large size and bulk. All bulls exist on a diet of plant matter including grasses, herbs, woody plants, seeds, grains, pretty much anything they can digest.

Technically, there are no wild cattle anymore. Cattle today are descended from the OC – the Original Cattle – more commonly known as Aurochs, scientific name: Bos primigenius (above). Humans domesticated this species and in the hundreds of years that followed, aurochs became extinct in the wild. Consequently all domesticated cattle around today came from the Aurochs.

However, there are feral cattle herds wondering areas like the foothills of the Himalayas and the Australian outback. Feral cattle are those which were once domesticated but escaped or were released from farming and now live and breed in the wild. So what do feral bulls eat?

Feral bull diets depend on where in the world they are located. For example, a famous herd of feral cows in British Columbia dine on a diet of eelgrass – a marine plant exposed at low tide. But as a general rule, wild cattle eat:

Feral herds travel around, foraging for high quality food for optimum nutrition. They are highly adaptable and will eat pretty much any plant matter they can find when food supplies are short. 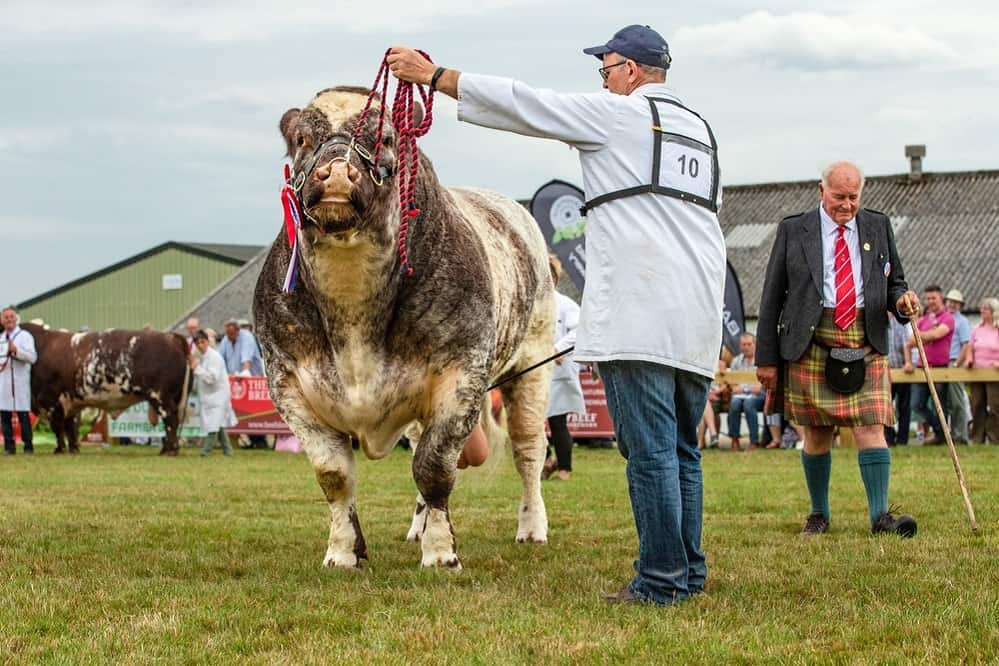 Domestic bulls are fed a similar but obviously higher quality diet compared to the foods their feral counterparts manage to forage. In most areas of the world, bulls are let out on pasture lands to graze on grass outside. They are also fed supplements depending on their age, weight, and breed.

Bulls are kept for breeding purposes, as they have not been castrated. They may also be kept for showing (above). It is the castrated males who are reared for meat. So feeding is targeted at building and maintaining a bull in top condition for successful breeding and the production of healthy calves.

The amount a bull is fed depends on how much it weighs. As a guide, bulls need to consume around 2% of their body weight (consisting of dry matter) to maintain their target weight. The amount of food may be adjusted depending on the nutritional quality.

The typical components of a domestic bull’s diet (commonly known as feedstuff) include:

Young bulls being raised for breeding require a higher quantity of protein in their diet compared to more mature bulls. During the breeding season, all bulls require a higher proportion of energy-rich foods. Feeding the right quantity and quality feedstuff to a breeding bull can boost its fertility.

Bulls which are hand-reared or raised on small holdings may be fed treats like fruit and vegetables by their owners.

Food Domestic Bulls Should NOT Eat

As a side note, there are some foods which should not be fed to domestic bulls. There are also lots of plants which can be poisonous to bulls or contain harmful allergens. Consequently, the land should be searched thoroughly, and plant species identified positively before bulls are grazed on land.

Some of the common foods which bulls should not eat include:

Note: this list is not exclusive, and research should be done in order to avoid bulls getting sick and unhealthy!

Bison are reared for meat by people, and some bulls will be kept for breeding. Domestic bison bulls are fed a similar diet to domestic cattle bulls including grass, roughage, silage, grains, oilseeds, and by-products.

Wild American bison (Bison bison) also eat a similar diet to feral cattle, with some difference and seasonal variation. They are able to retrieve a greater amount of nutrition from fibrous plant matter compared to cattle. Their diet also varies depending on the season. Their summer dietary components include:

Their winter diets include: 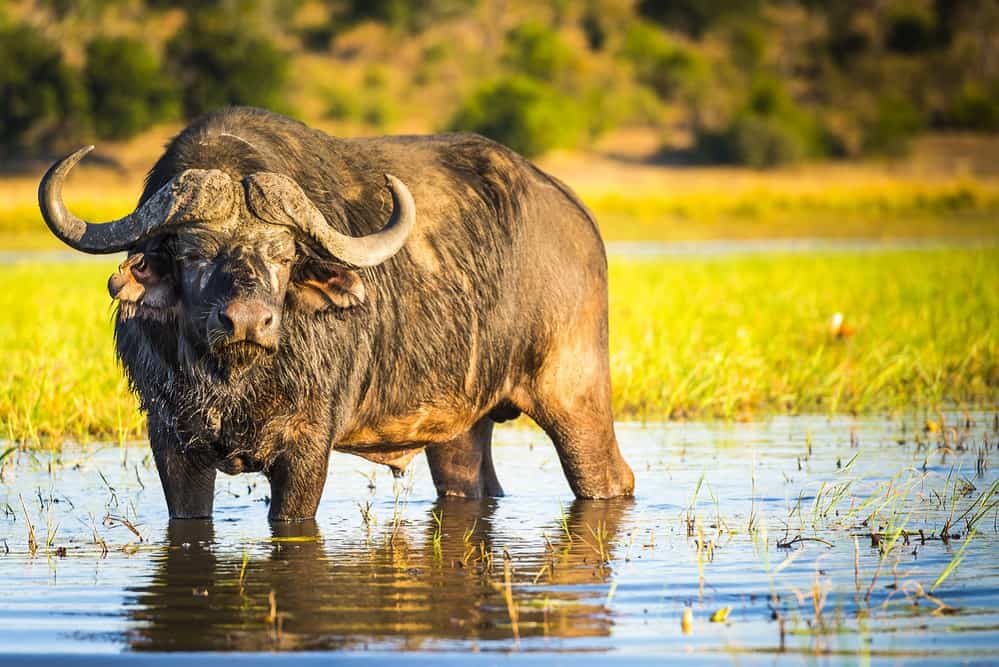 Again, domestic buffalo bulls are fed a very similar diet to domestic cattle and bison including grass, roughage, silage, grains, oilseeds, and by-products. They may also be fed agro-industrial by-products which may include food items like oil-seed cakes, sugar cane tops. Farmers may feed domestic water buffalo with fruits and vegetables like peanut, maize, turnips, and dates.

Wild buffalo are considered to be 2 species: African (or Cape) buffalo (Syncerus caffer) and Asian water buffalo (Bubalus bubalis) also known as the domestic water buffalo. Although they naturally occur in different regions, they can both be found in watery environments. While water buffalo are mainly found in the water, African buffalo are often found close to water.

The environments they inhabit will inform their diets, but both species of wild buffalo mainly eat:

Thank you for nice information. Please visit our web https://uhamka.ac.id/