Caterpillars are the relatively graceless and unlovable larvae of butterflies and moths. Unlike their later life stages, they tend to ravage plants rather than contribute significantly to pollination. Hence, one may wonder how these destructive arthropods ultimately become elegant agents of pollination.

One crucial question about these creatures is their diet and nutritional habits. So, what do caterpillars eat?

This article analyzes the nutrition of the larval stage of butterflies and moths. This information may prove valuable to people who raise butterflies and farmers or gardeners experiencing caterpillar infestations in their plantations.

What Are Caterpillars? Their Biology And Anatomy 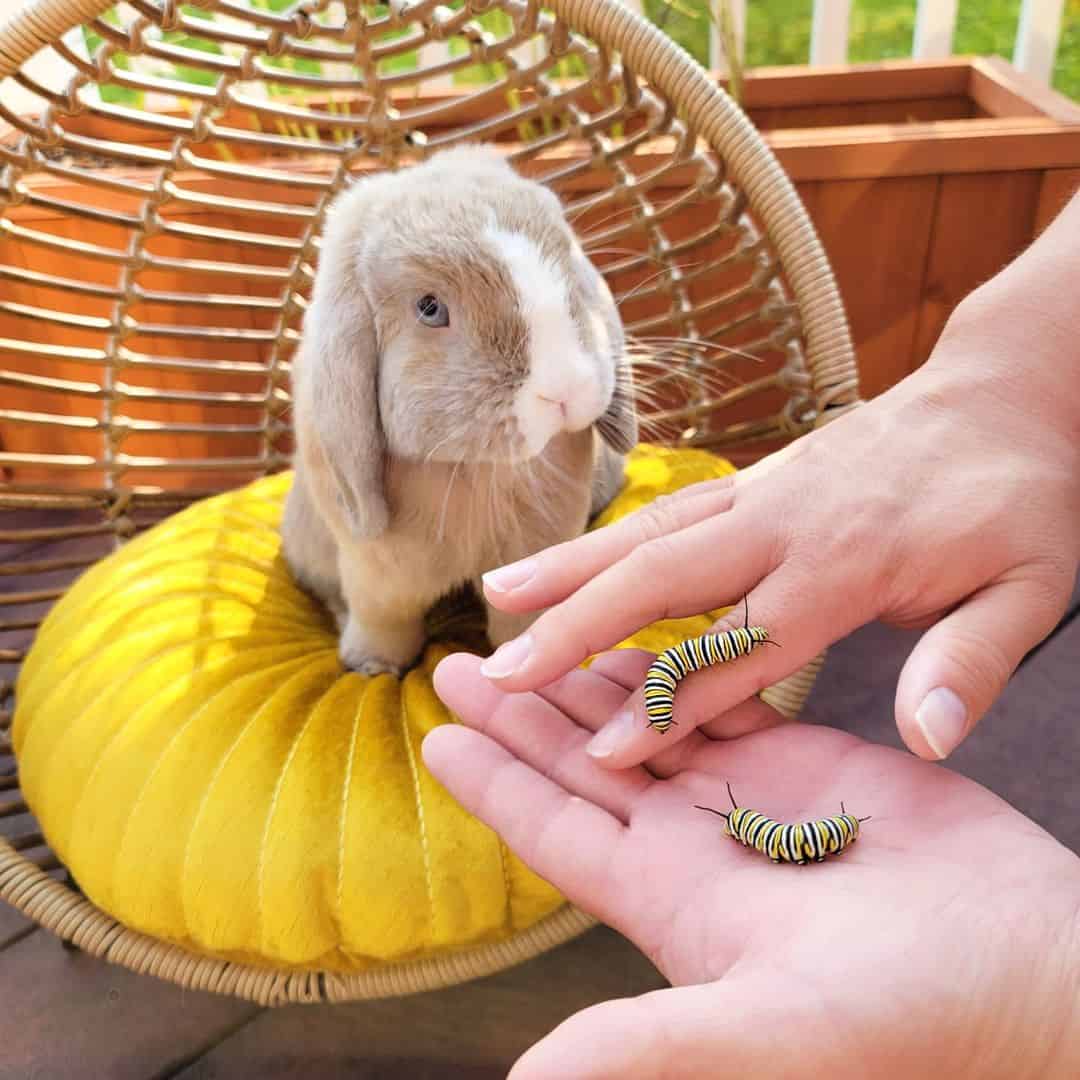 Another frequently used term for caterpillars is “worms,” such as measuring worms, silkworms, and armyworms. But technically, caterpillars are not worms.

Principally, butterflies and moths exhibit four stages in their life cycle. Caterpillars constitute the second stage — the intermediate between the egg and pupa (chrysalis for butterflies or cocoon for moths).

After Lepidopterans (butterflies and moths) lay their eggs on the leaves of plants, it typically takes 3–7 days for the caterpillar stage to emerge. The caterpillar stage, characterized by molting (changing its form by shedding its skin) several times, lasts for about 2–5 weeks before it transitions into the pupal stage.

In terms of anatomy, caterpillars predominantly possess cylindrical bodies, including a thorax and an abdomen. Their bodies comprise multiple segments. They have three legs on their thorax and some pairs of short fleshy prolegs on their abdomen.

Caterpillars’ bodily structure also comprises a head with six small eyes known as stemmata on either side. These eyes function for light detection. However, they aren’t responsible for image formation.

A caterpillar’s coloration essentially serves as a protective mechanism against predators. Yet, this feature varies from one species to another. It commonly functions by imitating the environment of the caterpillar and transforms as the creature grows.

Fun fact — Swallowtail caterpillars are white and brown and look like bird droppings on leaves. However, their appearance later adjusts, allowing them to blend in with the leaves and stems of plants.

The caterpillars of other species have eye-catching colors, which are enhanced by features including eyespots. This trait may help to deceive or scare off potential predators.

Where Do Caterpillars Live?

The area inhabited by a caterpillar usually determines what it will eat. Accordingly, it’s typical for butterflies and moths to lay their eggs on what will serve as a potential food source to their larvae. The caterpillars of various species often have a preferred host plant. These plants inform where the parent butterflies or moths lay their eggs.

Certain Lepidopteran larvae, like the pyralid moth larva, have unique underwater respiratory structures that facilitate their survival in aquatic habitats. Similarly, some caterpillars of the genus Hyposmocoma are amphibious.

Again, some caterpillars, including the Asian hydrilla moth larvae, form protective shelters by spinning silk cases intertwined with leaves, pebbles, and other materials. The additional materials help the larvae to blend in with their natural surroundings.

What Do Caterpillars Eat?

Caterpillars are voracious eaters. This trait has caused some people to dub them “eating machines.” These larvae feed almost entirely on plants, particularly the leaves. Yet, they may also eat flowers, twigs, mosses, lichens, small insects, and honeycombs. Unlike many other insects, caterpillars don’t drink water. Instead, they receive water through chewing leafy plants.

Common Types of Caterpillar Species and What They Eat

The noteworthy/major recognizable groups of caterpillars include the following:

Here’s have a detailed look into what they eat:

Swallowtail caterpillars are the larvae of several swallowtail butterfly species. Their remarkable feature is the osmeterium, an odoriferous organ on their prothorax, used for warding off predators.

The elephant hawk moth caterpillar develops and molts until it eventually becomes a moth species, Deilephila elpenor. These large caterpillars are so named due to their resemblance to an elephant’s trunk.

However, they don’t populate their host plants in such large numbers that they cause massive damage. Therefore, many farmers don’t consider them pests.

Painted lady caterpillars feed on most leafy plants. They’re especially fond of eating thistles, mallows, and sunflowers. Due to their preference for thistles, they’re also known as “thistle caterpillars.”

Woolly bear caterpillars are the larval form of the Isabella tiger moth, a moth species found in the United States and Southern Canada.

Woolly bear caterpillars aren’t picky when it comes to choosing their food. So, they eat various plants, including native plants such as asters, clovers, dandelions, and lambs quarters. They also consume violets and nettles.

Some species of green caterpillars include:

What Do Green Caterpillars Eat?

On the other hand, winter moth caterpillars mainly eat tree leaves, such as oak, beech, maple, willow, and the shrubs of raspberry and blueberry.

Finally, the emperor moth caterpillars have a robust appetite for leaves as they don’t eat in their adult stage. 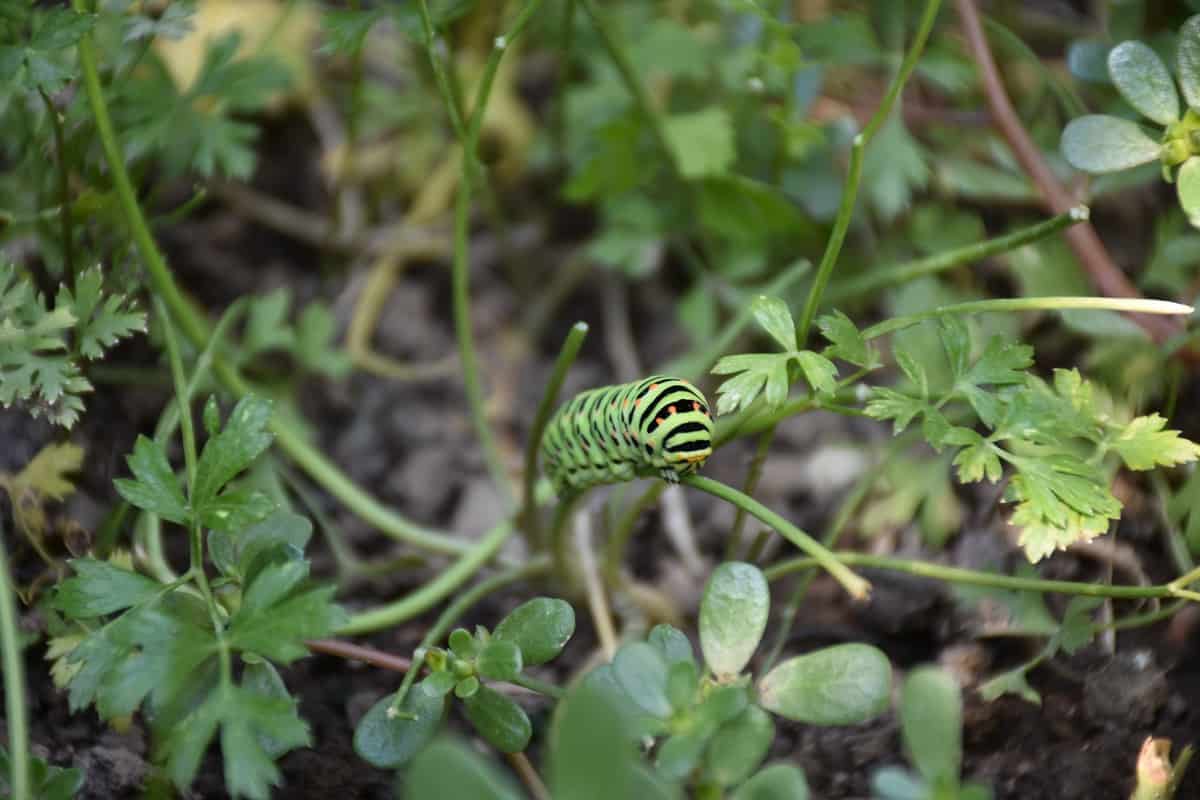 Numerous plants serve as the habitat and food source of caterpillars. Here, we’ll cite just some of the most significant host plants of Lepidopteran larvae.

Petroselinum crispum (parsley) is a biennial spice plant and herb belonging to the carrot family (Umbelliferae). This hardy plant is indigenous to the Mediterranean region. The ability of this plant to attract several species of butterflies is one of its striking features.

Anethum graveolens (dill) is an annual or biennial culinary plant belonging to the Apiaceae family, also incorporating parsley and celery. The plant is indigenous to the Mediterranean region and southeastern Europe. However, the plant is now widely cultivated in other parts of Europe, North America, and India.

The tomato plant (Solanum lycopersicum) is a flowering plant of the nightshade family that bears an edible berry. One species of caterpillars that eat tomato plants is the tomato hornworms.

As may be expected, they’re garden pests capable of completely defoliating tomato plants. These green caterpillars usually constitute a nuisance in gardens and farms.

Roses are a group of perennial shrubs of the Rosaceae family. These woody plants are mainly cultivated for their glamorous flowers.

Aside from humans, these plants also appeal to other critters, including caterpillars. Many caterpillars that eat roses are members of the silkworm family.

Some caterpillars that feed on the leaves or buds of rose plants include:

Milkweed is a group of perennial flowering herbs of the genus Asclepias. Various species of this plant, including the butterfly weed (Asclepias tuberosa), are host plants of butterfly larvae.

This plant serves as the habitat and food of monarch caterpillars.

Oak leaves can be evergreen or deciduous (depending on the oak species) with toothed, lobed, or whole margins. Though these plants are resistant to most pests, caterpillars may ravage them.

Some caterpillars that eat oak leaves include orange-striped oakworms and Western tussock moth caterpillars. Additionally, the oak leaf-roller caterpillar is a pest that could defoliate oak trees.

Though caterpillars may not be regarded as significant pests, some species wreak havoc on plants.

Some caterpillars can severely damage plants, leading to uneven or rounded holes in leaves and flower buds. This action may reduce the market value of vegetables, such as pumpkin, cabbage, and lettuce. Similarly, the fecal deposits of caterpillars, frass, are often present near the damaged plant tissues.

In addition, cabbage loopers and American lady caterpillars also fall into this category of caterpillars.

Similarly, the Eastern tent caterpillars are associated with a condition in horses—mare reproductive loss syndrome (MRLS)—characterized by miscarriages and stillbirths.

A contact with caterpillars may also elicit allergic reactions or extreme irritations in humans and animals.

How to Manage Caterpillar Infestation

It’s more valuable to pay attention to preventive measures other than control efforts when managing caterpillar infestation. Hence, if you notice any ring of butterfly or moth eggs on a leaf or around a tree branch, eliminate and eradicate it before the caterpillars hatch.

It’s advisable to wear gloves when you remove eggs or caterpillars from your plant, as some species have hairs or spines that may stimulate allergies or irritation. You may need to visit a health care practitioner if you exhibit symptoms of an allergic reaction after contact with caterpillars.

As the final option, you may apply insecticides. Insecticides may not be substantially useful against greedy mature caterpillars. However, they may kill the adults who’re in the process of laying another set of eggs and young larvae.

Meanwhile, the downside of using the insecticide is that it may also get rid of valuable caterpillars and other important insects. Before opting to employ an insecticide, confirm which pesticides are recommended and allowable in your region from a local agricultural extension office or licensed pest control group.

Other Uses of Caterpillars

Aside from the raising of caterpillars to become adult butterflies or moths by butterfly and moth farmers, Lepidopteran larvae may also serve the following functions:

Some parts of the world consume certain species of caterpillars as food. For instance, shea caterpillars are a delicacy in Burkina Faso.

Several studies prove that these unique meats contain high levels of proteins and micronutrients, such as iron and zinc, which one may derive from eating adequately prepared edible caterpillars.

2. Caterpillars in the Textile Industry

Some species of caterpillars, known as silkworms, are bred to produce the silk fabric. This cloth arises from the unique, profitable material that the creature spins. Consequently, they’re typically found in textile industries and rarely seen, if at all, in the wild.

Caterpillars commonly exhibit insatiable feeding habits because the next stage in the life cycle of Lepidopterans, the pupal stage, is mostly inert. Therefore, they feed as much as possible to amass nutrients that will last them throughout the pupal period.

In summary, we hope this article heightens your consciousness of the various host plants of caterpillars, the species that may behave as pests, and the valuable types of caterpillars.