Catfish are instantly recognizable with their characteristic whiskers or barbels. Whether you enjoy fishing as a hobby, like to watch wildlife, or are a fish dish connoisseur, you are likely to be well-acquainted with catfish. But did you know they use their barbels to search for food? And that they are one of the toughest groups of fish out there, surviving in conditions other fish could not?

Today, we’ll take a closer look at catfish, their feeding habits and dietary preferences. We’ll cover the diets of wild catfish – opportunistic hunters and scavengers that will almost any food item available to them including aquatic insects, crustaceans, other fish, carrion, algae, detritus, amphibians, and small mammals. Later, we’ll focus on captive catfish and the foods they receive in commercial fish farms, such as protein pellets, and catfish kept as pets which can be fed on a range of foods including fruit and vegetables.

First, we need to find out exactly what catfish are. Scientifically speaking, they are part of the order Siluriformes – a large order comprising teleosts, also known as ray-finned fishes.

There are almost 3000 species of catfish worldwide. The group is very diverse and widespread, most species occupy freshwater habitats although some can be found in saltwater. The majority of catfish species are found in tropical waters of South America, Asia and Africa, although they can be found around every continent.

Like many fish, catfish have nares – holes either side of their snouts which house a sort of chamber containing multiple folds. The folds are dotted with olfactory receptors and enhance the smelling abilities of a fish. Catfish possess the highest number of folds of all freshwater fish – over 140 folds! This exemplifies their incredible smelling abilities.

The barbels also aid a catfish’s sense of smell – they too are covered in olfactory sensors and tastebuds, helping a fish to seek out food sources in dark or murky waters where they cannot rely on their eyesight. Catfish are very sensitive to vibration which further aids their hunt for live prey, and helps them to avoid predators or other sources of danger such as boat propellers.

As extremely hardy survivors, catfish can exist in environments with very little oxygen and even survive periods without water! Some species will dig themselves into the muddy bottom of a water body when it dries up, lying in wait for the rainy season to begin again.

Another key characteristic of a catfish is the fact that they are scaleless. Scales are used as a form of defense for the majority of fish species – defense against both predators or attack, and pathogens. They also help with reducing drag in the water, making swimming easier and faster. Catfish and other scaleless fish employ other defense methods including:

Being scaleless is also an advantage in watery environments with lots of obstacles because it allows a catfish to be more flexible and manoeuvrable when searching for food. But what do they eat?

What Do Catfish Eat?

Although catfish are popularly believed to be exclusively bottom-feeders and only active during the night, there are many species which are active day and night, and search for food at all levels within a water body. Most catfish are omnivorous and will feed opportunistically on pretty much anything they can find. The size of prey and food items is mostly dictated by the size of the catfish species – only larger species can successfully hunt larger prey.

In freshwater environments like lakes and rivers, catfish feed on a great range of food sources including:

A stunning diversity of food items! Although catfish prefer to consume live prey, they will feast on carrion if the opportunity comes their way. They have even been observed to be cannibalistic, feeding both on the carcasses of dead catfish and on live catfish eggs and young. Please note, the common myth that giant catfish eat people is not true!

Catfish living in saltwater systems like the sea and coastal inlets will feed on a slightly different range of food sources dictated by their environment including:

The Age Of A Catfish Affects Its Diet

Young catfish focus on smaller foodstuffs that are easy to catch or forage, like detritus from the bottom of the lake, river or sea, the larvae of aquatic insects, worms and algae. Younger individuals will also consume a larger amount of food as they continue to grow, compared to fully grown adults.

As a catfish grows, it is able to catch and consume larger food items and prey. An adult’s diet will usually become more specific as it gets older. For example, Flathead catfish are almost exclusively piscivores, with live fish making up the vast majority of their diet.

The behaviour of catfish can very greatly due to there being such a diversity of species across the globe. As a general rule, most catfish operate primarily during the day and will actively search for food throughout their habitat. They tend to group together to feed when a rich or plentiful food source is located.

During a typical year, their feeding behaviours will change based on the season. This is not according to our human seasonal calendar, but depends on water temperature and climatic patterns. In winter, they are mostly inactive and will seek out cover such as holes or crevices usually close to the bottom of the water to rest in. When the water temperature begins to rise as spring approaches, they begin to consume large amounts of food, aggressively feeding and hunting to gain weight, ready for spawning.

During the spawning season, usually late-spring to summer, they will eat less and concentrate on spawning activities. The males build nests, and lure females in to lay a mass of eggs. He will then fertilize the eggs and guard them, keeping them clean from sediment and well aerated…and snacking on a few to keep his energy up!

As the water begins to cool in late-autumn, the catfish will calm down and become increasingly inactive as winter comes around again.

In commercial aquaculture, catfish are commonly used to stock fish farms. Here, they are usually fed protein-rich pellets (comprising around 30% protein) specifically developed for catfish. The type of pellet used depends on the water temperature:

This differentiation is based on the natural habits of a catfish described above – specifically, their inactive, bottom-dwelling behaviour in the winter (requiring sinking pellets in commercial aquaculture practices) and active searching behaviour in spring and summer (floating pellets can be advantageous here, allowing fish farmers to assess the health of their stock when they come to the surface to feed). Natural foods like worms and frozen mixes of fish, vegetation, and shrimp are used as supplementary feed. Cannibalism is a real threat amongst fish farm populations, so farmers must ensure the catfish get plenty of food year round to prevent them from feeding on their own spawn and young.

Catfish species kept in domestic aquariums and ponds are also fed on specialised pellets, but owners offer them fruits and vegetables, seeds, nuts and grains as supplementary feeding.

Next, we’ll focus in on a few fabulous examples of catfish, and take a look at their varying diets and unique behaviours… 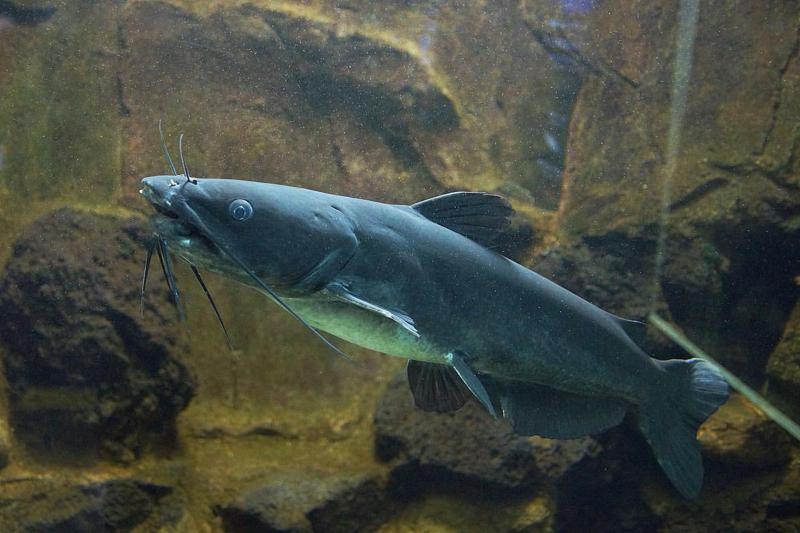 This species is one of the primary species found in American waters. Although they are mostly native to the Mississippi River Valley, they are widespread throughout reservoirs, rivers and lakes across the US. Channel catfish are one of the main species used in commercial aquaculture. It was widely introduced across Europe and Asia, and is considered an invasive species in some areas.

Large adults consume fish species like sunfish and yellow perch, but they will also take a vast range of food items from the general list above. Channel catfish are incredibly well adapted to turbid waters and have a particularly keen sensitivity to chemotaxic cues. 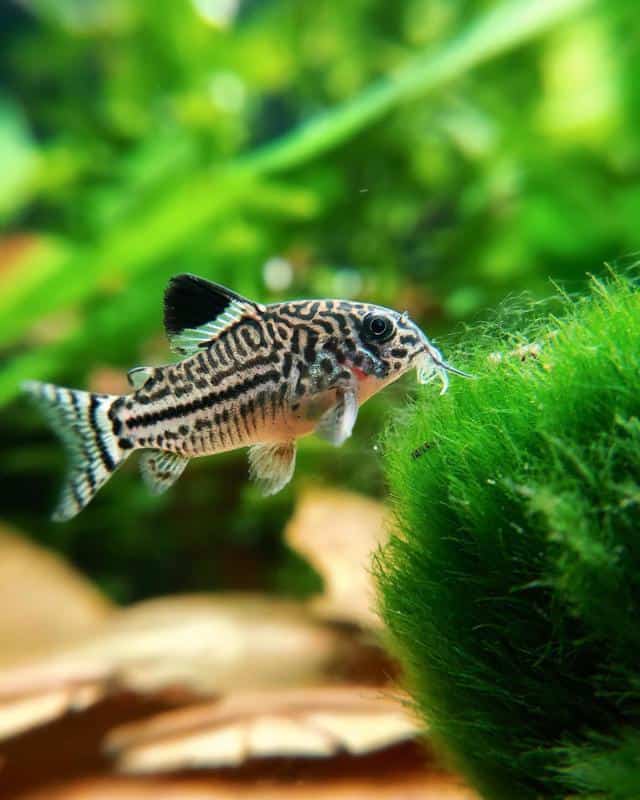 This delicate, relatively small species of catfish is popularly used in aquariums because they are very easy to look after and have been bred in a range of eye-catching colours and patterns. They are one of the catfish species that possess bony armour plates. In the wild they can be found in South American freshwater bodies, usually in streams or ponds, and along the edges of marshy areas.

Most Cory catfish are bottom-feeders, searching through sediment and detritus for insect larvae, worms and vegetation, primarily in shoals. 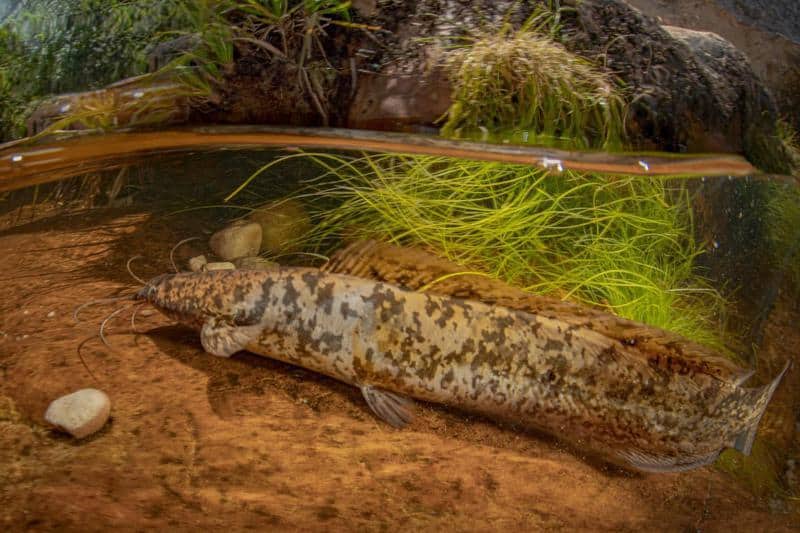 This species is an example of a nocturnal catfish. It is eel-like in appearance with a slender body and broad head, and spines are located only on the pectoral fins. In the wild, African sharptooth catfish can be found across Africa and the Middle East, in many freshwater habitats including artificial waterbodies like oxidation ponds. This species was widely adopted as a commercial aquaculture species in the 1980s.

African sharptooth catfish commonly feed on live and dead prey. They are able to take larger food items due to their broad mouths and large size, and have been known to consume waterfowl. This species can even crawl out onto dry land to find new water sources when their habitat dries up! 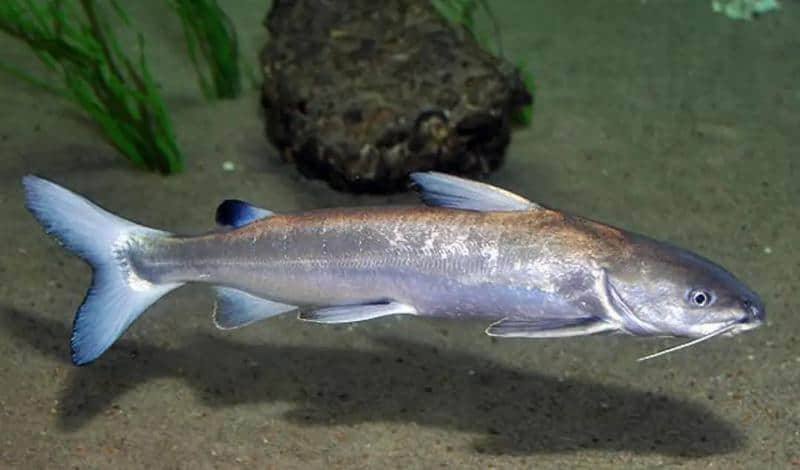 The Hardhead catfish is a saltwater species, and can be found from the Gulf of Mexico to the northwest Atlantic. It possesses a hard plate running between its eyes to the dorsal fin which gives it its common name. This species looks a little more like a shark compared to freshwater catfish species, with mostly grey coloring and a white underbelly.

This species commonly feeds on detritus and fish, but will also forage for algae, seagrasses, sea cucumbers, shrimps and crabs. A fascinating characteristic of this species is mouthbrooding – the male will carry the fertilised eggs around in its mouth, releasing them when they hatch! 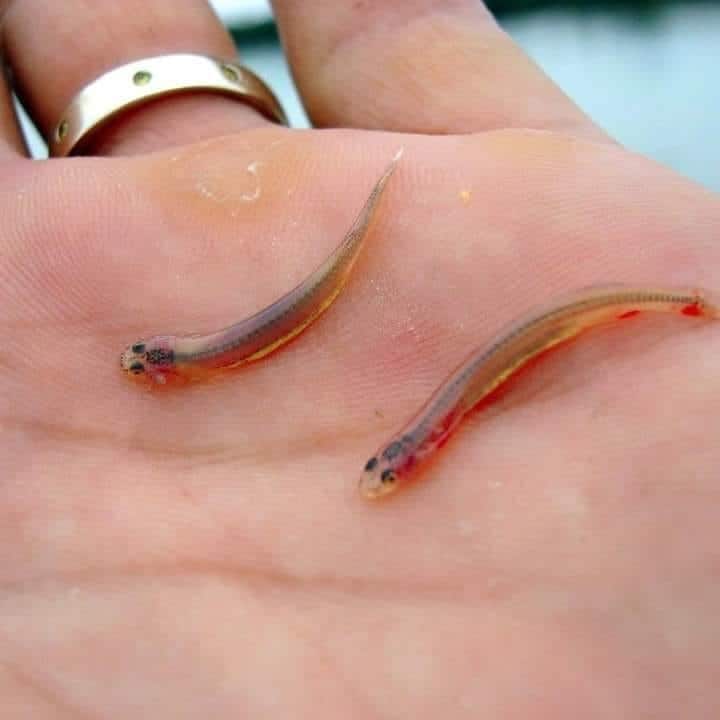 Also known as the toothpick fish or vampire fish, this species of catfish is possibly the scariest! Candiru catfish are parasitic, feeding on the blood of other fish. They are a tiny species which enables them to sneak up into the gill cavities of fish and latch on. Small spines on their gills are extended once they have settled in place, securing their position but also causing inflammation and sometimes hemorrhage in their hosts.

They can be found through the Amazon Basin in freshwater environments. There is a common belief that the Candiru will swim into the urethra of unsuspecting bathers. There are very few recorded cases of this, and therefore it is not something to worry about if you are travelling to or live in the Amazon!

[…] Also Read: What Do Catfish Eat? A Guide To The Diet Of These Whiskered Fish […]