Now you may wonder, what grub attracts centipedes to your house? This question is interesting since centipedes are pretty shy feeders. Centipedes prefer to have their dinner when no one is watching or threatening to squish them to death.

This article reveals the nutritional requirements and habits of centipedes. Apart from answering the pending question “what do centipedes eat?” we’ll be performing a quick general outlook on these creepy creatures with multiple legs to gain a better understanding of them.

A Quick Overview of Centipedes: What Are Centipedes?

Centipedes (Latin; hundred-footed) are venomous, nocturnal, predatory arthropods of Chilopoda. Chilopoda is a subphylum of Myriapoda, a larger arthropod group that includes invertebrates, such as millipedes and other creatures with multiple legs.

Centipedes are extended metameric invertebrates with a pair of legs per body segment.

Quick fun fact — did you know that, contrary to what their name suggests, no centipede has a hundred legs precisely?

Their legs range from 30–354 in number. More interestingly, centipedes always have an odd number of leg pairs.

Furthermore, the size of these creatures can range from a few millimeters to about 30 centimeters. They usually have a dull coloration of red and brown shades. However, species inhabiting tropical areas, such as scolopendromorphs, possess bright aposematic colors, which serve to repel or warn predators.

The fossil record of centipedes suggests that the creatures evolved about 430 million years ago in the Late Silurian period. Today, approximately 8,000 species of centipedes occupying a wide geographical range are believed to exist.

Centipedes are reputable as one of the largest terrestrial invertebrate predators. Hence, they contribute significantly to the terrestrial predatory invertebrate biomass. This fact indicates why it’s critical to study centipedes’ nutritional requirements and habits. 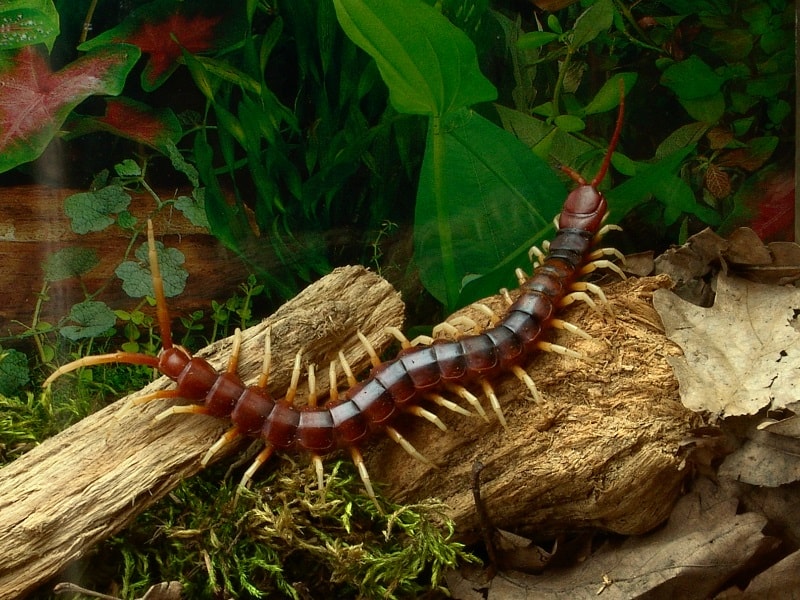 When answering the question “what do centipedes eat?” it’s vital to run through the habitat of centipedes. This is simply because an organism’s choice of food depends on its habitat, and conversely, nutrition enables organisms to survive in their chosen habitat.

In this light, centipedes’ natural habitat range extends from tropical rainforests to deserts

Besides food, one essential factor that influences centipedes’ habitat choice is the habitat’s water content. Centipedes lack the waxy cuticle possessed by insects and arachnids.

This deprivation causes them to lose water rapidly. Thus, they require moist microhabitats to compensate for their constant water loss.

This begs the question, how do some centipede species thrive in the desert? The answer is simple — desert centipedes are better adapted to inhabit deserts in both their anatomical structure and behavior.

Generally, centipedes are primarily carnivorous. Their diet consists of insects, spiders, other invertebrates, other centipedes, and small vertebrates on some occasions.

For optimal comprehension, we’ll be providing explanations and answers to the nutrition mode of each centipede order mentioned above.

House centipedes are perhaps one of the most frightening visitors that you may find in your homes. They may even be found underneath your wet bathroom foot mat.

You could also see them quietly crawling on a damp area below your kitchen sink. Of course, you should be able to tell why they’re in these moist regions of your house by now.

So, what nourishment brings these many-legged, unwelcome guests to your house? In other words, what do house centipedes eat?

If you once questioned the possibility that roaches could be a centipede’s favorite food, well, clear your doubts because centipedes eat cockroaches at the drop of a hat.

Stone centipedes live their life around stones, especially moist stones. This order of centipedes will carry out their activities outdoors preferably without coming indoors.

Lithobiomorphs are opportunistic predators and feed on any invertebrate prey of reasonable size. These creatures eat beetles, ticks, mites, mosquitoes, flies, dragonflies, and other centipedes.

As expected from their relatively large size, tropical centipedes, including the Amazonian giant centipede, are impressive and fierce hunters.

Have you ever heard of centipedes that eat bats? Giant centipedes exhibit an incredible ability – they catch bats and birds in mid-flight and have them for dinner.

Again, it may be difficult for many to imagine centipedes eating mice. Still, tropical centipedes eat mice, other rodents, lizards, and frogs.

Soil centipedes dwell in the soil. These multi-legged earth-dwellers have a method of burrowing into the ground reminiscent of earthworms (What do earthworms eat). They dig into the earth by alternately expanding and contracting their body.

So, do centipedes eat plants? No, they don’t feed on plants. Neither are they harmful to plants.

On the contrary, geophilomorphs protect plants by eating insects and other small creatures in the soil that may ravage plants. Beneficial, right?

Thus, soil centipedes have a different diet from their far cousins, millipedes. It’s common to see millipedes eating strawberries, tomatoes, and other ripe fruits within cracks in the soil.

Adaptations and Characteristics That Facilitate the Nutritional Mode of Centipedes

As invertebrate carnivores, several structures and behaviors enable centipedes to feed. These nutritional apparatus are the products of adaptation and evolution.

Some of these features include:

Forcipules are pincer-like modifications of the first pair of legs (maxillipeds) of centipedes. This unique structure found only in centipedes is an adaptation for hunting.

Centipedes use their forcipules to inject venom into their prey, paralysing them in the process, and enabling centipedes to keep their grip on the prey. Various species of centipedes have distinctly different forcipules. However, the structures have similar functions.

Numerous centipede species lack eyes. However, some species possess compound eyes, which allow them to distinguish between light and darkness rather than see the world as we do.

One may mull over how these multi-legged creatures compensate for their “blindness.” The solution for their sight deficit lies in their antennae.

Typically, centipedes have a pair of antennae at the forward margin of their flattened or round head. They use this structure to sense and locate their prey. More importantly, their antennae are so effective that they can successfully find their target without exposing themselves to predators.

Furthermore, some groups of centipedes possess unusual sense organs, the organ of Tömösváry, found below the base of the antennae. These organs are used for sensing vibrations.

Venom plays a significant role in the survival of a centipede. Centipedes use their venom to incapacitate and capture prey and defend themselves against predators.

Accordingly, they secrete their venom from venom glands connected to their forcipules through a tube. The venom flows specifically through a pore located near the tip of each forcipule. This method of venom injection, through a modified pair of walking legs, is unusual in the animal kingdom.

Furthermore, the venom of a centipede constitutes a mixture of various toxins. Similar to the venoms of snakes and scorpions, centipede venom is thought to be a natural pool of proteins, peptides, and biologically active enzymes. Additionally, some contemporary pieces of research hint at the presence of more than 500 proteins and peptides in their venom.

Neurotoxic proteins and peptides are the primary active components that rapidly paralyze prey.

The digestive tract has been adjusted structurally over years and generations to enhance the assimilation of nutrition. Fundamentally, the digestive tract of a centipede is a simple tube with digestive glands attached to the mouthparts.

Due to their poor vision, centipedes prefer hunting at night when they have the upper hand. Their antennae enable them to maneuver handily in the dark and locate their unsuspecting prey.

Other elements employed by centipedes when hunting are speed and agility. They move considerably fast and attack their prey energetically, enhancing their hunting success. These traits also enable centipedes to evade potential dangers. 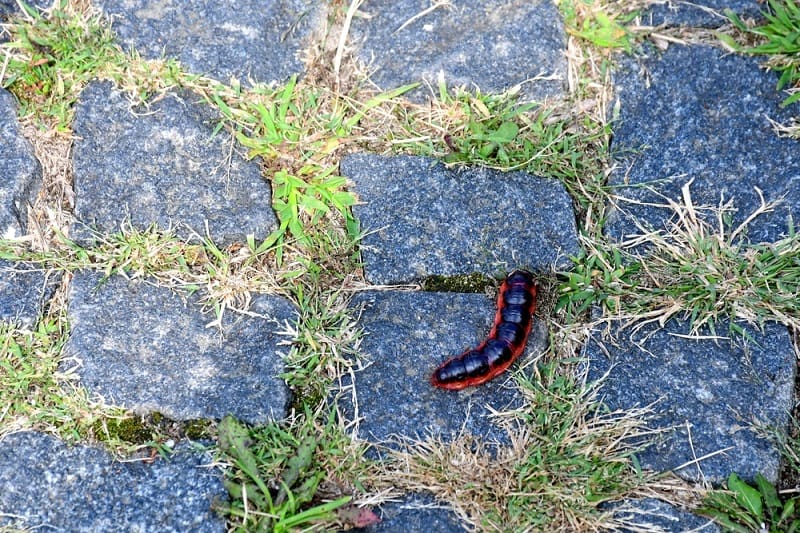 Some animals have different diets at various stages of their life. What about centipedes? What do baby centipedes eat?

Centipedes usually emerge from eggs after a female centipede has engulfed a spermatophore deposited by a male centipede.

Some centipede species exhibit a more startling nutrition mode when they’re newly hatched. In some species of scolopendromorpha (tropical centipedes), matriphagy occurs — where the offspring eat their mother.

The nutrition war between these two arthropods is worthy of special mention. While both centipedes and spiders equally share a craving for eating insects, what happens when no insects are around, and the two carnivorous invertebrates cross paths? Do centipedes eat spiders, or do spiders eat centipedes?

These questions get two positive responses. Yes, centipedes eat spiders and even present a means of keeping spiders away. Nonetheless, spiders also eat centipedes only when they have an advantage over centipedes, for instance when staged against young centipedes.

The Danger Myth of Centipedes

Contrary to popular belief, centipedes aren’t dangerous to humans if left alone. These multi-legged arthropods are only threatened to attack humans when disturbed or provoked as a defensive mechanism. In such cases, they react by biting humans and injecting them with their venom.

Even so, centipede venom doesn’t typically cause any severe or fatal damage to humans. The bites may be painful and stimulate allergic reactions in some individuals, but they’re usually not deadly.

Relevance of Centipedes to Humans in Terms of Nutrition

Centipedes and humans are two organisms that regularly interact with each other. Hence, however different they may look, both creatures are relevant to one another nutritionally.

The nutritional characteristics of centipedes, especially house centipedes, tends to reduce the number of insect pests in our homes. While centipedes benefit from munching on some insects, such as ants, roaches, flies, bedbugs and tiny spiders, we profit from the population reduction of these pests.

2. Source of Food for Humans

Farmed giant centipedes are prepared and eaten as food by some humans, especially people in China, Thailand and Vietnam. The centipede meal is usually prepared after the heads and pincers of the centipedes have been taken off.

One may wonder if centipedes are poisonous to eat. The truth is, if properly prepared, the dish isn’t harmful to humans.

As suggested by this article, many scientists are interested in studying centipedes’ nutritional requirements and habits. Since centipedes may be forced to eat their meals in the dark, the topic of their nutrition is particularly fascinating.

An individual who frequently sees house centipedes in their home but hasn’t observed the predatory nature of centipedes may ask, ” do centipedes eat human food?”. It is known that this isn’t always the case.

The nutritional requirements and habits of centipedes are fascinating contrary to the popular belief that centipedes are boring animals. We hope you have become more aware of the different sorts of prey preferred by the various orders and stages of centipedes.

Most importantly, we hope we have helped you to understand that centipedes are more in the category of natural pest controllers rather than pests themselves.