Coyotes can be described in many ways – vicious, cunning, opportunistic, even cute. They occupy a vast range of habitats through North and Central America. Their versatility allows them to thrive in different landscapes and climates, they have even started to spread into urban areas.

But what do these smart canids eat? Coyotes are primarily carnivores – meat makes up the majority of their diet. They will hunt for live prey or scavenge carcasses: everything from moose and deer to mice and squirrels. However, they are technically omnivores and will take advantage of almost any food source they come across including fruit, vegetables, eggs, insects and fish. In urban areas they will not turn their noses up as rifling through garbage. This impressively diverse range makes coyotes incredible survivors!

Today we will take a closer look at the components forming the coyote diet, as well as their hunting and feeding habits. Let’s start of by checking out exactly what these cool canids are…

What Is A Coyote?

Scientific name: Canis latrans. This translates as ‘barking dog’, referring to coyotes’ habit of howling and yipping as a form of communication with one another, and in reaction to loud noises.

Coyotes are part of the Canidae family, along with dogs and wolves – this group are sometimes called canids. Although they are closely related to wolves, they are much smaller and have pointier muzzles. They also tend to have darker coats and exhibit bolder behaviour in terms of wandering into urban areas compared to wolves.

There are at least 19 known subspecies of coyote, occupying areas from Alaska down to Panama. They can be found in packs, pairs or individuals depending on time of year, and the age and gender of individuals. Usually coyote pairs are monogamous, but reproduction is limited to pack leaders – alpha females become fertile during the breeding season while other females remain sterile in terms of their behaviour rather than biologically.

These adaptable animals can be found in grasslands, deserts, prairies, boreal forests and urban areas including Los Angeles! Coyotes sometimes hunt alone and sometimes in packs, and this influences the size of prey they are able to take down. In wilder areas they hunt during day and night, but mostly hunt at night in urban areas. But what kinds of prey do they hunt for? And which food items do they forage for?

What Do Coyotes Eat?

Around 90% of a coyote’s diet is comprised of meat. These canids are big time carnivores, but their opportunistic nature means that they are technically omnivores. The remaining 10% of their diet is made up of pretty much any food sources they can forage including:

Coyotes are not as specialised as wolves in terms of hunting and killing prey. Their jaws are smaller and their molars have bigger grinding surfaces, an indication of the inclusion of plant matter and other non-meat items in their diet.

Fruit and vegetables will primarily be consumed in fall when they are ripe and more easily digested. Grass and grains are taken mostly in winter when other food can become scarce, and coyotes cannot afford to be fussy.

In the urban areas they occupy it is common for them to forage through garbage to obtain food scraps, and they will go for pet food if left outside the house. Coyotes are resourceful but human food is not good for them. For this reason it is important to secure garbage so they cannot access it.

Although they will opportunistically take whatever they can most easily obtain, coyotes have a strong preference for meat. As such, they will hunt for live prey and scavenge the carcasses of many animals including those of other coyotes! Their prey items can include: 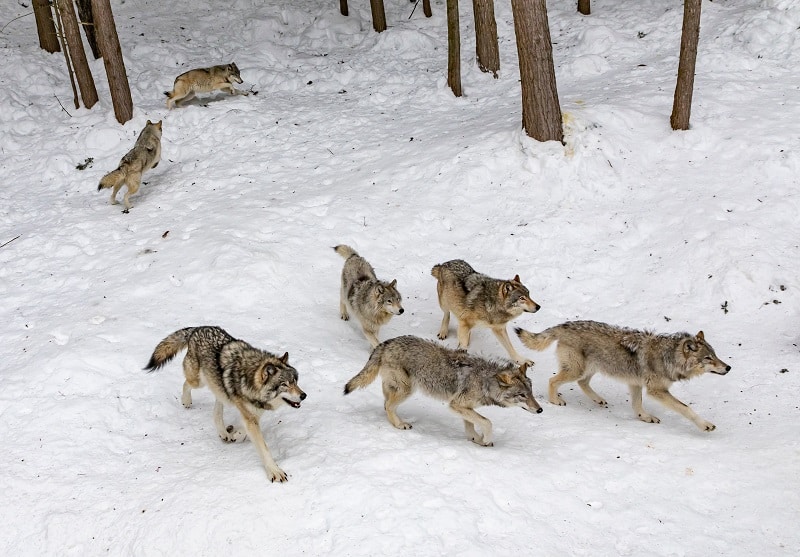 In some areas, coyotes have been noted as a useful form of small predator control. In ecosystems where they are the top predator, they can help to regulate smaller predators (or mesocarnivores) which can help to boost biodiversity in the area. Red foxes are considered as competition for coyotes, and there are reports that coyotes will kill red foxes upon sighting them, presumably to remove the extra competition for food resources.

There is a long history of coyote conflict with humans, primarily in rural areas where coyotes take advantage of agricultural crops and hunt livestock. This has led to persecution efforts including poisoning, trapping, and shooting. However, it has been shown that these control measures are not effective in the long-term, disturb the natural balance within an ecosystem, and could even promote coyote population growth through affecting the hierarchy of coyote packs and leading to an increase in fertile females.

A staggering variety of dietary components allows a coyote to take advantage of whichever ecosystem it inhabits.

Competition For Food Resources – Coyotes vs Wolves And Cougars

Due to the fact that the diets of coyotes, wolves and cougars are very similar, they are often in competition with one another in areas where their ranges overlap. As coyotes are smaller than wolves and cougars, they tend to lose if a fight for territory occurs. Gray wolves will outcompete them for kills and possibly directly kill coyotes that they find within their territory. Cougars will also kill coyotes if the opportunity is presented to them. Therefore, coyotes will avoid areas where these larger predators are present.

Coyotes even compete with Lynx and Bobcats in certain areas of their diet – primarily hares and rabbits. These species tend not to directly fight but will disperse into areas of the habitat that favour them. For example, lynx are better adapted to snowier areas where their large paws benefit them in gliding over deep snow. Coyotes tend to avoid snowy areas and are better adapted to plains and lowlands.

With the increasing number of urban coyote populations, you may well be wondering if coyotes pose any threat to humans. Would they even attack and eat a human?

For a coyote to attack a human is an incredibly rare event. In most cases, the attacking coyote has been fed by humans which has encouraged it to associate humans with food. Occasionally, a person has been attacked while trying to defend their pet from a coyote. There is no way a coyote would attack a person in order to kill and eat them – they will only attack out of self-defence, if they have become tame through intentional feeding, or in the rare case that they have rabies. However, it can be easy to prevent coyote attacks through simple actions including:

It has been well-documented that coyotes will go after urban pets when they get the chance, particularly at night. It is advised to keep your pets indoors during the night, and to store pet food indoors where coyotes cannot access it. This factor can cause conflict with humans and gives the coyote a bad reputation.

However, urban coyotes provide several benefits to urban areas including removing carrion from the streets, and keeping rodent and raccoon populations in check. These tasks help to reduce disease transmission and promote cleaner, healthier streets. It has been observed in rural areas surrounding coyote-populated towns and cities, that urban coyotes show less interest in farmland when they have the option of scouting urban areas. It appears it is possible and even beneficial for humans and coyotes to coexist.

Due to their magnificent adaptability and resourceful feeding habits, coyotes are at home in a vast range of habitats across North and Central America. They are opportunistic animals and will take whichever food resources they can find in abundance. Although they follow a primarily carnivorous diet, they will also consume a range of plant matter, making them omnivores.

Within ecosystems, they perform an important ecological role, keeping mesocarnivore and rodent populations in check, and clearing up carrion. Their influence helps to promote biodiversity within the environment and marks them as an incredible, versatile species.

What do coyotes not eat?

This is a tough question due to diversity of coyote diets. In general, coyotes will avoid human food unless there is a shortage of other food sources. They also avoid poisonous plant material and carrion that had rotted beyond safe consumption. They will not attempt to eat man-made materials intentionally but may accidentally consume dangerous substances like plastic – this is another reason to secure garbage, which will also help to protect many other wildlife from ingesting dangerous materials.

How to observe coyotes in the wild?

Coyotes are usually best seen around dawn and dusk hours when they are most active. Sit quietly and make slow movements. It can be useful to position yourself in an elevated area to help you observe a larger area of land. Try targeting areas where there is a high abundance of prey items such as grasslands. Avoid using flash photography. Do not lure coyotes with food!

Should you feed coyotes?

No! Feeding of coyotes will make them accustomed to humans and human areas, making them bolder and increasing the chance of attacks. Make sure you secure garbage, compost bins and pet food to prevent scavenging from coyotes, for your sake and the coyotes own sake. Although not intended for coyote consumption, bird feeders can attract rodents which in turn attracts coyotes. If you are worried about coyote proximity to your property either remove bird feeders or consider adapting them to discourage rodents.

Would a coyote jump over a fence, wall or barrier?

Yes! Unless it is over 6 feet tall (1.8 metres). Recommended materials include brick, wood, wire and cement. It can be a good idea to top the fence or wall with outward facing ‘extenders’ to stop coyotes from climbing over. Electric fences can also be effective. Coyotes are good at digging so burying a skirt of wire mesh below the fence can help prevent this.

How is the coyote population doing today?

Coyotes are classed as a species of Least Concern by the IUCN. It has been reported that their population numbers are increasing and may be at an all time high (in terms of recorded human history). However, coyotes still face threats from hunting for sport and ‘pest control’, and habitat loss.

The statement that removing coyotes will "increase their numbers" is a total myth started by ignorant people who wanted to stop ranchers from protecting their animals.This claim is made because how quickly another transient coyote will take over the area. It is absolutely possible to decrease their numbers by harvesting them, and thus saving livestock.

[…] What Do Coyotes Eat? Exploring The Diet Of These Cunning Canids […]