Depending on where you are from, you may know crawfish as crawdads or crayfish. In some areas they are even called freshwater, rock or mountain lobsters, mudbugs, and yabbies! In this article, we’ll continue to call them either crawfish or crayfish. These small, lobster-like crustaceans are unmistakable with their tough shells and tiny but perfectly formed pincers.

Crawfish can be found in many different freshwater environments including rivers and lakes, and there are several species inhabiting different areas of the world. Some people may know them better as seafood, and in some places such as Sweden there are important cultural celebrations centred around crawfish cooked in different ways.

But what do these snappy, water-dwelling creatures eat? What do they survive on as they scout the muddy and rocky bottoms of water bodies? Crawfish are omnivores, consuming both plant and animal matter including algae and aquatic insects and invertebrates. They are also detritivores – they feed on dead organic matter, decaying vegetation, animal waste, and dead animals.

Their hunting, foraging and feeding techniques can be fascinating, and differ depending on the crawfish species and the habitat they live in. So let’s take a deep dive into the dietary requirements and feeding behaviour of these intriguing crustaceans…

Crawfish are technically crustaceans – arthropods in the same broad group as crabs, lobsters, shrimp, barnacles, krill, and woodlice amongst others. This group is characterised by hard body segments, their exoskeleton, with each section sporting a pair of appendages (legs!).

These armoured crustaceans are relatively hardy, occupying many different freshwater habitats from flowing rivers and brooks to still lakes, ponds, swamps and marshes. A few species are found in brackish water – a mix of salt and freshwater – too! In some areas species like the Signal crayfish can be considered as invasive pests due to their abundance and the way they outcompete native crayfish species. However, they can be vulnerable to acid rain and pollution, and infections like the crayfish plague.

Crawfish sport compound eyes, like those of flies, on extended stalks. Although this type of eye produces low resolution images, they give an animal a wide field of view and an impressive motion-detection ability.

They also characteristically boast small but powerful chelae – pincers – on their front legs, and smaller back legs used most for swimming and in the circulation of water as part of their respiration process. Like many aquatic creatures, crawfish have gills with a feather-like structure to facilitate respiration.

In the daytime, crawfish are mostly inactive and tend to hide at the bottom of their watery environment, under rocks and other debris. They become active at night when they begin to hunt and forage for food, making them nocturnal predators. This is why, when you shine a torch into a lake or pond populated by crawfish, you may see their eyes glowing back at you. Like many nocturnal creatures, they possess reflective lenses, helping them to see in the dark and in low-light conditions at the bottom of a water body. 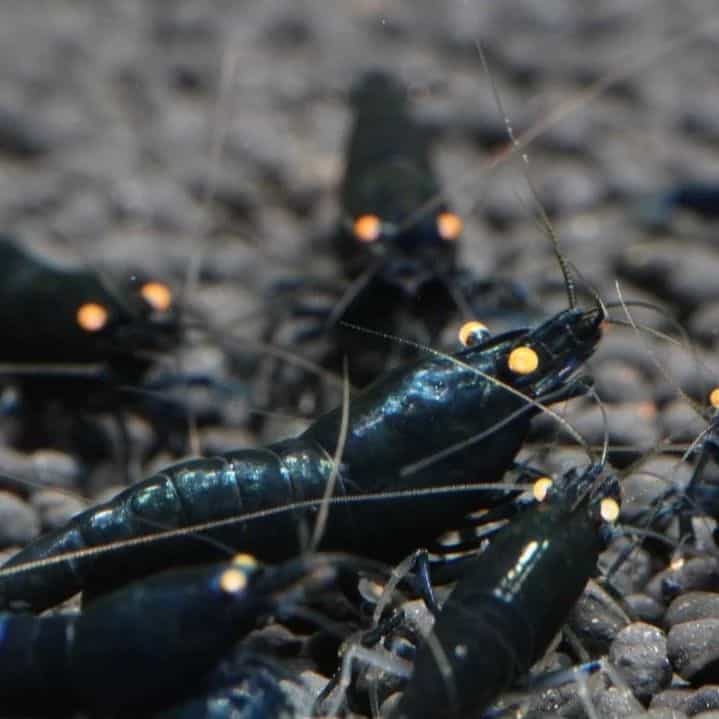 But what do they eat? And how do they obtain their food? Let’s take a closer look at the crawfish diet and feeding behaviour…

What Do Crawfish Eat?

Crawfish are omnivores – they consume both plant and animal matter. The biggest portion of their diet comes from detritus, making them active detritivores. They seek out dead organic matter from plants and animals, and waste products that float to the bottom of the waterbody. However, they also hunt for live prey and will opportunistically catch anything small enough they can lay their pincers on including:

Crawfish will also consume living algae and other aquatic vegetation, and plankton. The detritus they consume can include any kind of decomposing matter such as animal feces, rotting vegetation, and dead animals. They use their pincers to pick up and pull apart their food, diligently sucking in the particles through their mouthparts. This technique is why crawfish are also known as filter-feeders, swallowing down particles they find suspended in and lying on the bottom of the water.

They have been observed to show cannibalistic tendencies! Larger crawfish will take the opportunity to prey upon smaller or weaker individuals, and will feed on their own eggs and young if other food sources are scarce!

Depending on the age of the crawfish, the dietary components and amount of food consumed will differ. Young crawfish need to eat more – between 1-4% of their body weight daily! – to facilitate their growth and development, while adults require less – between 0.3-1% of their body weight daily. Younger individuals also tend to consume more protein-rich foods, particularly animal matter, while older individuals mostly stick to plant matter.

Once the food is taken in through the mouth, it passes down to the first stomach, the cardiac stomach. This stomach chamber stores the food they ingest before it is passed into the second stomach, the pyloric stomach, where it is mechanically broken down into smaller pieces by teeth-like structures. Next, the ground food passes into the intestines where nutrients are absorbed into the blood while the waste products are carried further and eventually excreted.

The Ecological Role Of Crawfish

In the wild, crawfish have an important role within their ecosystem. They are commonly eaten by water-dwelling predators like some waterbirds and otters, and land-based predators like foxes, mink, raccoons, birds of prey and even water snakes. This is one reason that they can be described as a keystone species within their local freshwater and terrestrial habitats – they are in important food source for local predators. 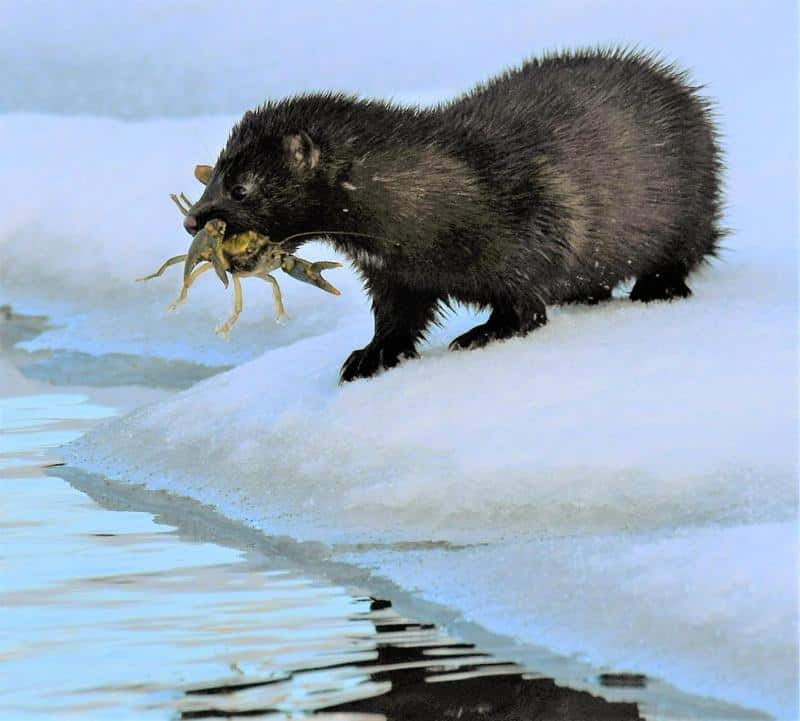 Some crawfish species burrow into the sediment at the bottom of water bodies, and these tunnels can often be utilised by other animals as a form of shelter or a place to lay their eggs. The way they process decaying materials helps to ‘clean up’ the freshwater habitat, facilitating efficient energy flow through the system. By filter-feeding, they help to improve the quality of the water in which they live.

Individuals kept as pets or farmed in aquaculture systems consume a different diet compared to their wild cousins. However, their food items contain the same components and aim to provide them with a varied, balanced diet to promote optimum health.

Captive crawfish are usually raised in ponds, rice fields, or a network of carefully regulated tanks, and are fed items including:

Often, the environments in which farmed crawfish are raised are planted up or supplied with vegetation to form the basis of the crawfishes’ diet. The vegetation will also provide a habitat for other aquatic insects and invertebrates which may be added to the ponds, encouraging natural grazing on both animal and plant materials.

Examples Of Crawfish Species And Their Diets

Here, we’ll have a closer look at a few notable crawfish species, and focus on their adaptions and specialities… 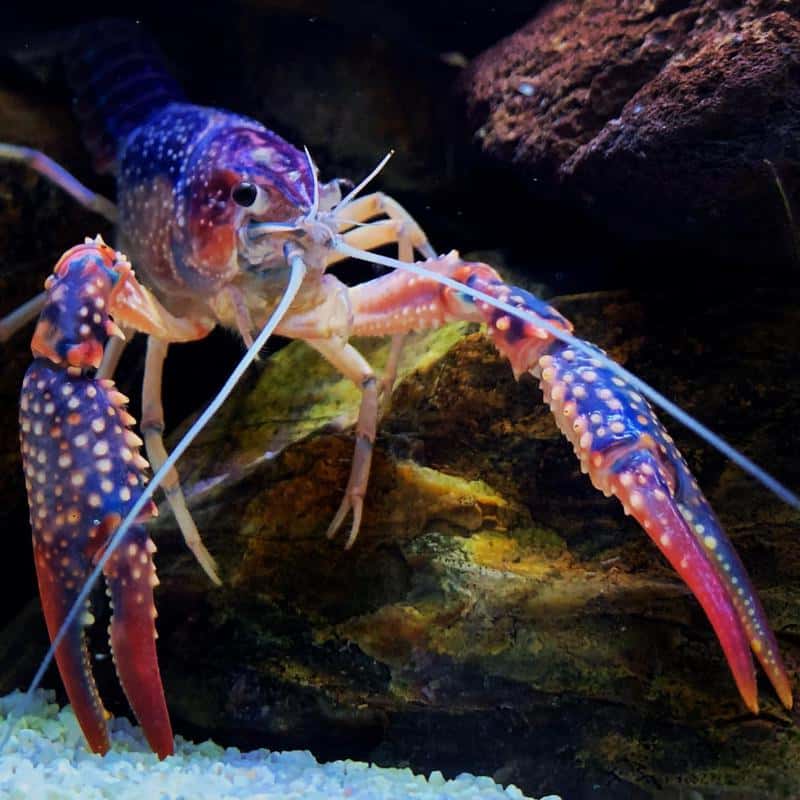 These stunning, electric blue crawfish have a whole host of common names including:

Despite their colorful name, blue crayfish in the wild can range from white to red and brown, as well as their characteristic blue shade. They are incredibly popular in aquariums due to their striking color, and relatively easy to take care of because of their non-fussy omnivorous dietary requirements.

They originated from a range of freshwater habitats in Florida, but populations originally from aquariums have been found established in the wild in France, Germany and California.

Blue crayfish are particularly fond of aquatic worms such as tubiflex or sludge worms, and mosquito larvae. 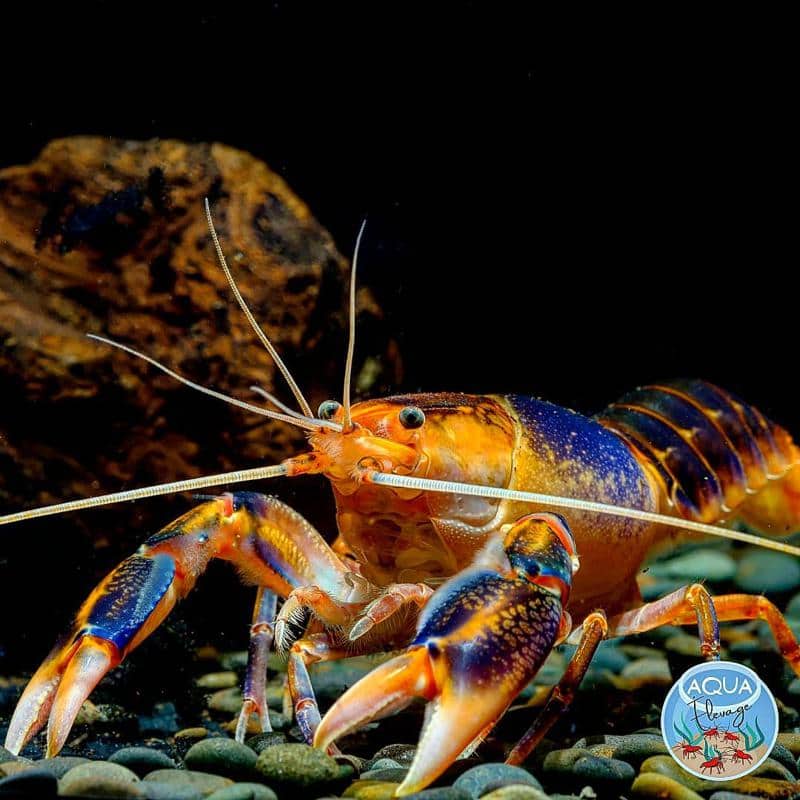 Colloquially known as a Common yabbie or a yabba, the Smooth freshwater crayfish originates from Australia. It has a wide range within Australia and is an incredible survivor – it can tolerate very harsh conditions and can even survive long-term droughts for several years by burrowing deep into the muddy bottom of a river or stream.

The second part of its taxonomic name ‘destructor’ refers to the destructive action that this species’ burrowing behaviour can create. This can lead to erosion of riverbanks and dam walls. It has been widely introduced to other parts of the world

The diet of a Smooth freshwater crayfish varies with the season: in summer they tend to concentrate on fish; in winter they will consume primarily plant matter and detritus. 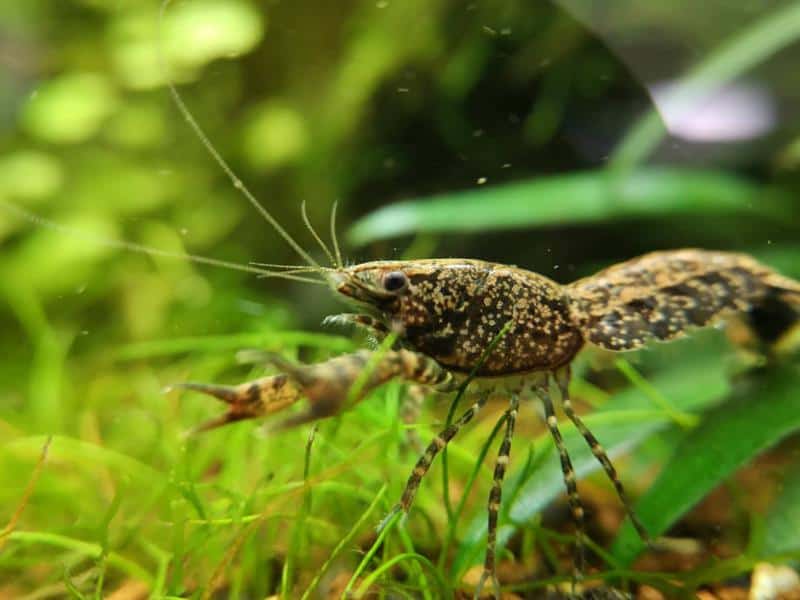 The tiniest species of crayfish, the Least or Dwarf crayfish, is endemic to some very restricted localities in North America. This species is absolutely tiny, ranging from around 2 to 2.5 cm in length! They inhabit slow-moving freshwater habitats like oxbow lakes and slow-flowing streams and ditches.

Not much is known about this species in the wild, and data on its population number and distribution is limited. However, it will typically follow an omnivorous diet, and is fed sinking pellets when kept in aquariums. Due to its diminutive size, it is likely to take tiny prey items and feed on microscopic particles floating in the water. 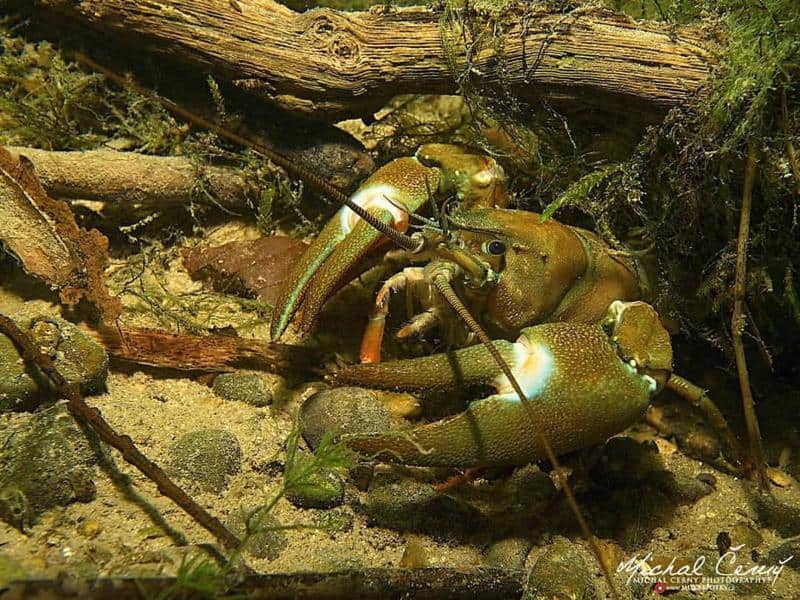 This relatively large species of crayfish originally comes from North America, but has been introduced in many parts of Europe as a commercial aquaculture species. It has since become an invasive species due to its aggressive behaviour and ability to outcompete native crayfish species. Signal crayfish also carry the crayfish plague and gravely endanger native populations through disease transmission.

It is a voracious, hungry predator, consuming everything from fish, frogs and invertebrates to other crayfish species, and other Signal crayfish.

They can travel over land to reach new freshwater habitats, and have a high reproductive rate meaning that they can populate new areas very quickly. 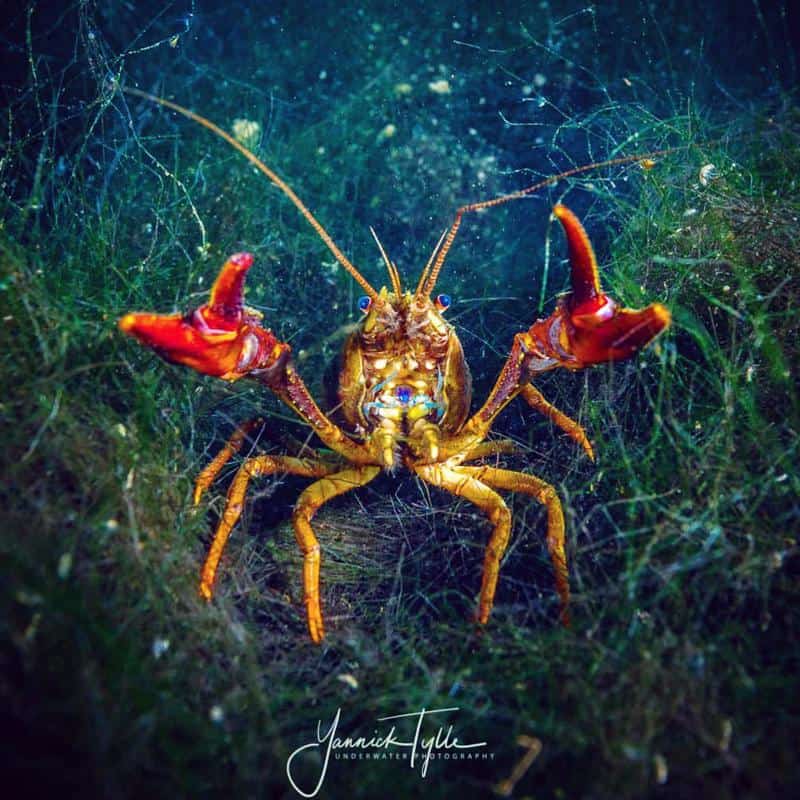 The European crayfish is widespread through Europe and especially Scandinavia. It is commonly eaten during crayfish parties in Sweden (Kräftskiva) along with Signal crayfish, at the end of the summer season.

European crayfish can be found in a range of still, freshwater bodies including reservoirs, lakes and ponds. They require a large abundance of shelter for hiding places so prefer water bodies with large rocks and rotten wood on the bottom of the water.

They primarily feed on worms, molluscs, aquatic plants, and insects. As a prey item themselves, they are commonly predated on by eels, mink, otters, wading birds, and carnivorous fish such as perch.