Earthworms are literally down-to-earth creatures, just as their name suggests. They spend a significant portion of their time in the soil doing things that may seem bizarre to an oblivious watcher. However, it’s now clear that these quiet critters help the ecosystem with their nutritional habits.

Thus, the question “what do earthworms eat?” is highly vital to our existence and the continuity of the ecosystem at large.

This article uncovers the nutrition mode and habits of these introverted ecosystem engineers we call “earthworms.” This inquiry will expand our understanding of what they eat and how to contribute to their nutrition. Ultimately, this knowledge will benefit us since the nutrition of earthworms impacts all land-dwelling creatures positively.

A Brief Synopsis of Earthworms: What Are Earthworms?

Earthworms are eyeless soft-bodied land-dwelling invertebrates that belong to the phylum Annelida. As their name suggests, they’re typically found in the soil.

Fun Fact — Do you know that not all earthworms live in the soil? Some species like the brandling worm (Eisenia fetida) live in decaying plant matter and manure.

Earthworms have a tube-within-a-tube body plan segmented both externally and internally. Hair-like structures known as setae are present on all segments. Additionally, they possess muscles in their body wall, which act along with the setae to aid their locomotion on the soil.

These earth-loving creatures possess a unique supporting structure known as a hydrostatic skeleton. Their hydroskeleton is made up of fluid-filled coelom chambers to maintain their framework.

While some Australian earthworm species can measure up to 3.3 meters in length, the nightcrawler (Lumbricus terrestrial), a common species in the US, grows to approximately 25 centimeters (10 inches).

In terms of color, most earthworms are reddish-brown. However, some species appear white, gray, pink, or green. The reddish-brown coloration of earthworms is due to the reflection of their hemoglobin-containing circulatory fluid (“red blood”).

Another fascinating fact about earthworms is their hermaphroditism — functional reproductive parts of both sexes are present in each worm. Accordingly, they lay eggs enclosed in cocoons produced by an organ called the clitellum. The clitellum is usually situated between the 32nd and 37th segments of the annelids.

With over 1,800 species in existence, earthworms are actively involved in the sustenance of the ecosystem. They positively influence plant nutrition amidst other eco-friendly actions.

Regarding these truths, the prominent British naturalist, Charles Darwin, developed a particular interest in the peaceful worms. While studying them, he noted their importance to the ecosystem even though they seemed “lowly organized.” Similarly, studying earthworms and their nutritional habits is a giant stride in learning how the ecosystem is maintained.

Principally, earthworms are found worldwide, with some species occurring abundantly in specific locations while sparingly present or completely absent in other regions. Within these locales, they occupy various habitats. Ultimately, an earthworm’s habitat determines its distinct grub choice.

As previously stated, the habitat of earthworms isn’t restricted to the soil, although most earthworm species live in the ground. For instance, the brandling worm (Eisenia fetida) dwells in decaying plant matter and manure.

Similarly, an earthworm species from Vancouver Island and the Olympic Peninsula, Arctiostrotus vancouverensis, is typically found in decaying conifer logs. Several species can also be found inhabiting stream muds. Meanwhile, some arboreal species of earthworms have been reported.

Earthworms have been observed occupying other places such as freshwater, saltwater, and seashores. Among the soil species of earthworms, some inhabit unique habitats within the soil. Some soil species have been seen dwelling in soils derived from serpentine.

Fundamentally, the population of earthworms in the soil relies on the soil’s physical and chemical properties. These elements include:

Although the most vital environmental factor is the soil’s pH, this component varies among species, with most preferring neutral to slightly acidic soils. The common earthworm species, Lumbricus Terrestris, thrives at a pH of 5.4. 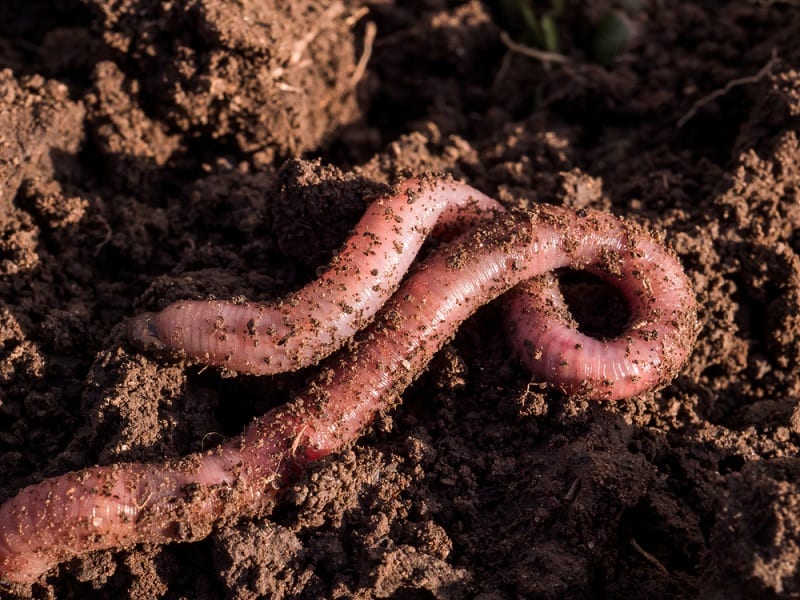 Since over a thousand earthworm species are present globally, it’s essential to classify earthworms more succinctly. In this light, we’ll reflect on the ecophysiological classification of earthworms.

This method of classification incorporates both the environmental and functional facets of earthworms. In addition, it’s highly relevant to the nutrition of the gentle annelids.

Leaf litter worms are earthworms that live at the soil-litter interface. They are a non-burrowing category of worms. An example of these worms is Eisenia fetida.

As indicated by their name, topsoil-dwelling worms occupy the top layer of the soil, particularly the upper 10–30 cm of soil. They tend to burrow and cast a relatively shallow depth within the earth, creating horizontal burrows in the topsoil. The grey worm (Aporrectodea caliginosa) is an endogeic earthworm.

Anecic earthworms inhabit deeper strata of the soil. Members of this category of earthworms establish permanent deep vertical burrows, enabling them to visit the soil surface for food.

In essence, the word anecic implies reaching up as the organism moves upward for food. Lumbricus terrestris belongs to this class of earthworms.

Nutrition of Earthworms — What Does an Earthworm Eat?

Epigeic earthworms like Eisenia fetida prefer to eat decomposing organic matter, such as manure. On the other hand, endogeic worms, including the grey worm, primarily feed on nutrient-rich soil, just like the video game character “Earthworm Jim” eats dirt. Anecic earthworms, such as the nightcrawler, move upwards to consume plant material from the soil surface.

Aside from decaying organic matter, earthworms eat the following:

What about animals? Do earthworms eat animals?

Adaptations That Facilitate the Nutritional Mode of Earthworms

Though anyone unfamiliar with earthworms may perceive them as poorly developed organisms, earthworms possess certain biological apparatuses and peculiarities that significantly foster their nutrition and nutritional habits. This means they’re well-adapted to their nutrition needs.

Some of their adaptive features and their functions include:

In summary, the digestive tract of earthworms is a straight tube without coils, consisting of longitudinal and circumferential muscles that facilitate the movement and absorption of food.

Numerous animals regularly prey on earthworms since they don’t possess adequate defense mechanisms against their predators.

Common predators of earthworms include:

Numerous birds prey upon earthworms, including robins, crows, gulls, and thrushes. The American robin is a principal earthworm eater that directly consumes many earthworms. Ironically, the helpless earthworms eat birds that are dead and decomposing.

Some reptilian predators of earthworms include lizards, chameleons, and wood turtles.

Other invertebrate creatures prey upon earthworms. These organisms include ants, beetles, spiders, flatworms, snails, and slugs.

Slugs are especially notorious for feeding on earthworms. However, just like in the case of birds, earthworms eat slugs that are dead and decaying.

Nutritional Relevance of Earthworms to Humans

Humans and earthworms have a critical nutritional relationship. Over time, humans have discovered that these typically ground-dwelling creatures are valuable to them in terms of nutrition. The following sections expound more on this. 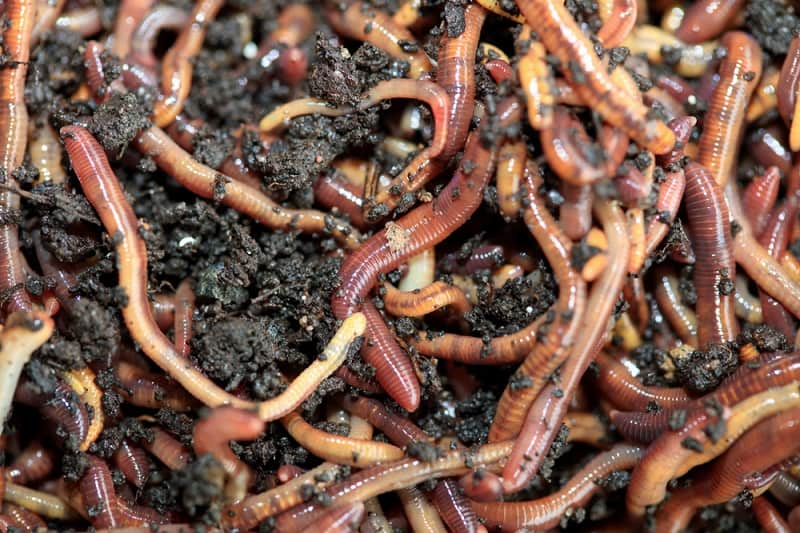 Worm composting refers to the process of using saprophytic worms, most especially earthworms, to recycle food wastes and other organic matter into plant-nourishing soil called vermicompost or worm compost. The procedure occurs in a container known as a “worm bin.”

Does a vermicomposting-earthworm eat chicken feces? It’s not ideal to use chicken fecal waste during the worm composting process because it’s primarily dry and possesses relatively high ammonia content, which isn’t quite friendly to plants.

The best worms for this process are brandling worms (Eisenia fetida) and red worms (Lumbricus rubellus).

Naturally, vermicomposting also occurs when you plant your crops on soil rich in organic matter and earthworms.

Do earthworms eat plant roots in the natural process?

Yes, an earthworm may eat the roots of plants. However, they only consume minute amounts of roots, which nearly eliminates the possibility of damaging plants. On the contrary, earthworms may eat plants in significant quantities if the soil lacks sufficient organic matter.

Yes, if adequately prepared, earthworms are a great source of protein and other nutrients. The wriggly meat is a special delicacy in Southern Venezuela. It serves as an ideal source of iron, calcium, copper, and other essential minerals to the Ye’kuana tribe of Venezuela.

Nonetheless, the unique meat requires adequate preparation and passing through heat as earthworms may host several microorganisms in their guts.

The next question on your mind may be, “what type of earthworm can I eat”?

Great pieces of research have prompted ecologists and biologists to acknowledge earthworms as one of the most beneficial organisms to the soil and ecosystem at large. Hence, scientists have dubbed them “soil engineers” or “ecosystem engineers.”

Anecic earthworms, such as Lumbricus terrestris, create channels for drainage, aeration, and root growth through their soil-burrowing activities. Earthworms also substantially improve soil aggregation by ingesting aggregates, breaking them down, and mixing the soil with organic matter and other binding agents.

In this light, they stabilize soil aggregates through their defecated casts. Consequently, previously degraded soil regains its strength through the effects of earthworms.

Furthermore, litter-feeding earthworms, including nightcrawlers, prevent the outbreak of invasive scab fungi when they consume litters deposited on the soil surface.

Additionally, earthworms contribute to plant growth by fixing nitrogen to the soil through their defecated casts. They also increase the number of metabolic activities in the soil and accelerate nutrient cycling rates in the environment.

If you read till this point, you’re now aware that the seemingly little introverts of the earth, earthworms, contribute immensely to the sustenance of the ecosystem through their nutritional activities. It’s also noteworthy that our very nutrition depends on that of these natural soil engineers since all heterotrophs fundamentally depend on plants for food.

Thus, these eco-friendly worms deserve more attention and appreciation than they’re currently receiving from us.

[…] pigeons have adapted to survive in more rural habitats. They can eat things like earthworms (What do earthworms eat), grasshoppers, and […]