Hawks are a group of birds of prey that can be found all over the world, soaring through the air and using their sharp eyesight to scan the landscape below. Whether you are a bird lover or not, hawks are some of the most exciting birds to observe in the wild due to their fascinating hunting skills.

You may even have been lucky enough to spot these birds in your local area, gliding on the air currents and perching in the tops of tall trees. Hawks have razor sharp talons and can reach impressive speeds, both of which help them to successfully hunt for live prey such as small mammals and even other birds.

But did you know hawks consume a diverse range of prey items, pretty much anything they can find that moves? Hawks are a truly carnivorous bird group, only diverging from their consumption of live prey when food sources become scarce, and they are forced to feed on carrion.

Today we will explore the range of prey hawks expertly catch and discover the adaptions that make them sleek, successful hunters. We’ll also focus in on 5 examples of amazing hawk species. Let’s take a closer look at what makes a hawk a hawk…

Although there is some debate about the exact definitions of a hawk, most people agree that they belong to the order Falconiformes along with other well-known birds of prey like eagles, falcons and buzzards – the falconiforms. 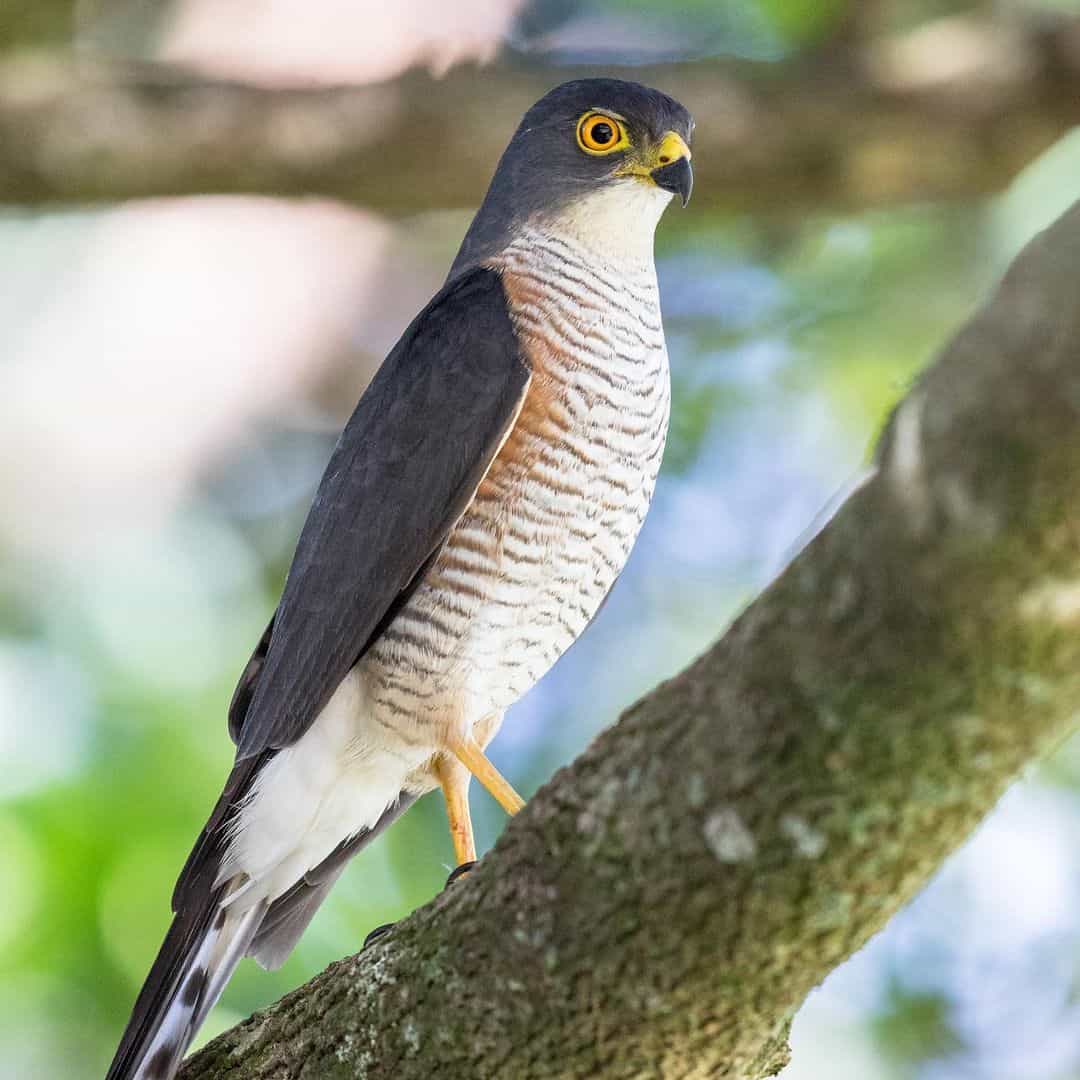 Hawks can be found on all 6 major continents, nesting and hunting in a range of habitats but most commonly in forested areas. They construct nests from twigs and woody material, usually high in trees, and lay 3 to 5 white eggs with brown speckles.

In general, hawks are identified by short, rounded wings and comparatively long tails and legs. They are best known for their incredible eyesight and impressive speed and manoeuvrability whilst airborne and in pursuit of prey.

Some species of hawks migrate such as the partial migrant species the Cooper’s Hawk (Accipiter cooperii), native to North America. Most Accipiter species are reversed size dimorphic which means that the females are larger than the males. This is unusual within animal species as the male is most often larger than the female (size dimorphic). The Accipiter species with the biggest size difference between genders is the Eurasian Sparrowhawk (Accipiter nisus) – the male is half the size of the female!

But what do hawks eat? And how do they find and catch their food? Let’s focus in on their feeding habits…

What Do Hawks Eat?

As birds of prey, hawks are strict carnivores. As a genus, Accipiter hawks consume an astounding variety of food items including:

No wonder they survive in so many areas of the world! Hawks pretty much eat anything they can find that moves, and usually prey that is smaller than them. However, their hunting techniques can be so crafty and their talons so sharp and unyielding that they are able to take down prey larger than themselves like some species of waterfowl and hares.

Once a hawk has successfully caught its quarry, it will typically kill and pin it down with its formidable talons and use its sharp, pointed beak to dismember it. Like many birds of prey, hawks will swallow every part of the animals they catch including the fur or feathers, bones and other inedible parts.

Because they do not have teeth, their food is ‘chewed’ in their gizzard – a sort of muscular stomach compartment. Birds commonly ingest grit which is collected and used within the gizzard to grind food down. The indigestible components of the food are compressed into a pellet which is then cast back up through the birds’ system and regurgitated. It sounds crazy, but it saves a bird of prey from carrying around cumbersome teeth which would greatly weigh them down. 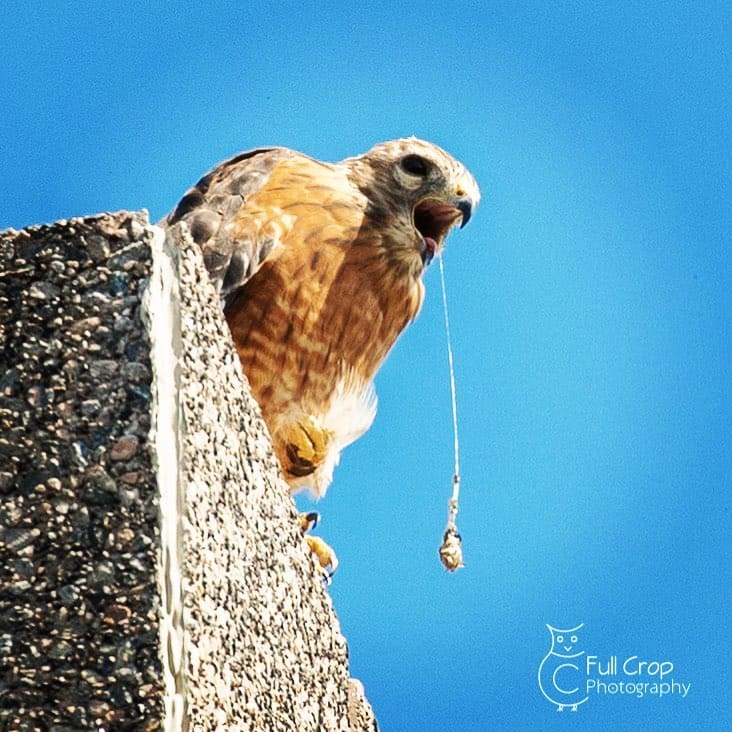 The type of prey a hawk will hunt depends on the habitat, availability of prey species, type of hawk and time of year. The environment a hawk species is adapted to will influence its hunting technique and special adaptions for catching prey. The eyesight of these birds tends to be 8 times more accurate than human eyesight! And some hawks can dive through the air at speeds up to 150 miles per hour (240 kilometers per hour)!

Here, we will take a look at some of the most common hunting techniques hawks use to target their quarry.

This technique is usually employed by hawks that specialise in hunting other birds. Sometimes this technique is also called raking. It involves the swift pursuit of prey, dodging through trees and around obstacles with impressive agility, and an element of surprise as the hawk swoops in at high speed from above.

Soaring techniques are employed in open areas such as grasslands, where the hawk is able to locate prey over large tracts of land. High soaring is performed by larger hawks which can glide on the air currents for extended periods of time in full view of prey, stressing and tiring them until the hawk is ready to make its move. Low soaring relies on agility and quick reactions – when the prey sights a low soaring hawk it can spook them into movement, revealing their position to the hawk.

Another technique used on open ground. A hawk will sight a prey item and fly into position above them in the air. The hawk will then hover, remaining stationary with its head fixed in place and wings beating rapidly. Finally, it will dive down swiftly, pouncing on the prey and surprising it from above.

Similarly to the hover and pounce technique, perch and swoop involves pinpointing a prey item in the first instance. However, the hawk will perch in an advantageous spot like a high tree branch or a rocky ledge, waiting to catch sight of the prey. It will swoop down to the ground at the opportune moment, hoping to catch its prey unawares. Usually this technique is used in areas with plentiful prey species.

Now we’ve gained a better understanding of how hawks catch, consume, and digest their prey, let’s take a look at some examples of hawk species and their favourite things to eat.

5 Hawk Examples:  Who Are They And What Do They Eat? 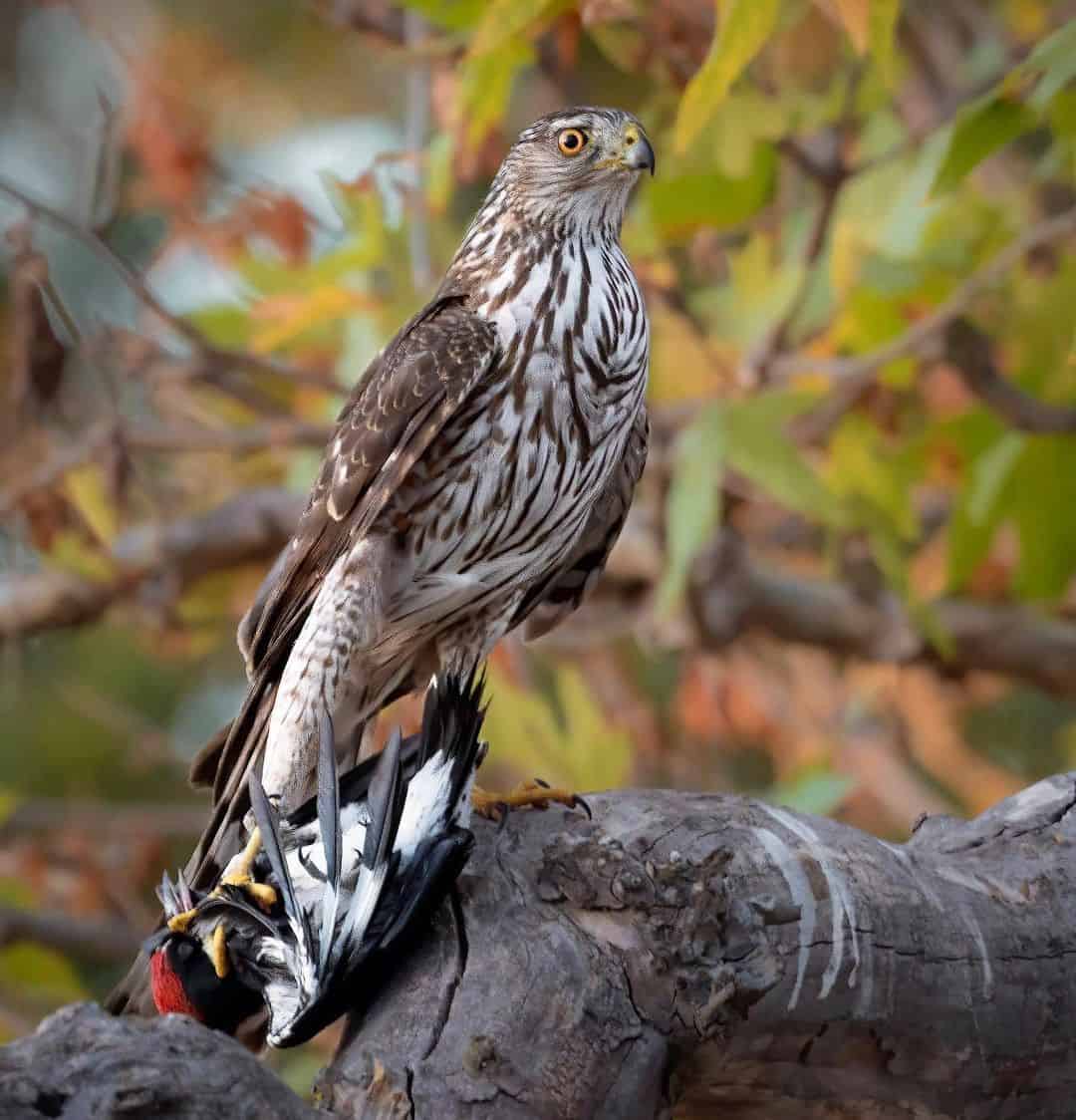 These woodland specialist hawks can be found throughout much of the United States. They employ aerial pursuit, dodging skilfully through densely crowded trees when chasing their prey. Cooper’s Hawks mostly hunt other birds, usually medium-sized birds like Jays and Doves. However, they will also take small mammals like chipmunks and mice.

They cunningly position their nesting sites in areas with abundant songbirds and have therefore begun moving into urban areas where songbirds can be found, attracted by bird feeders and human food scraps. 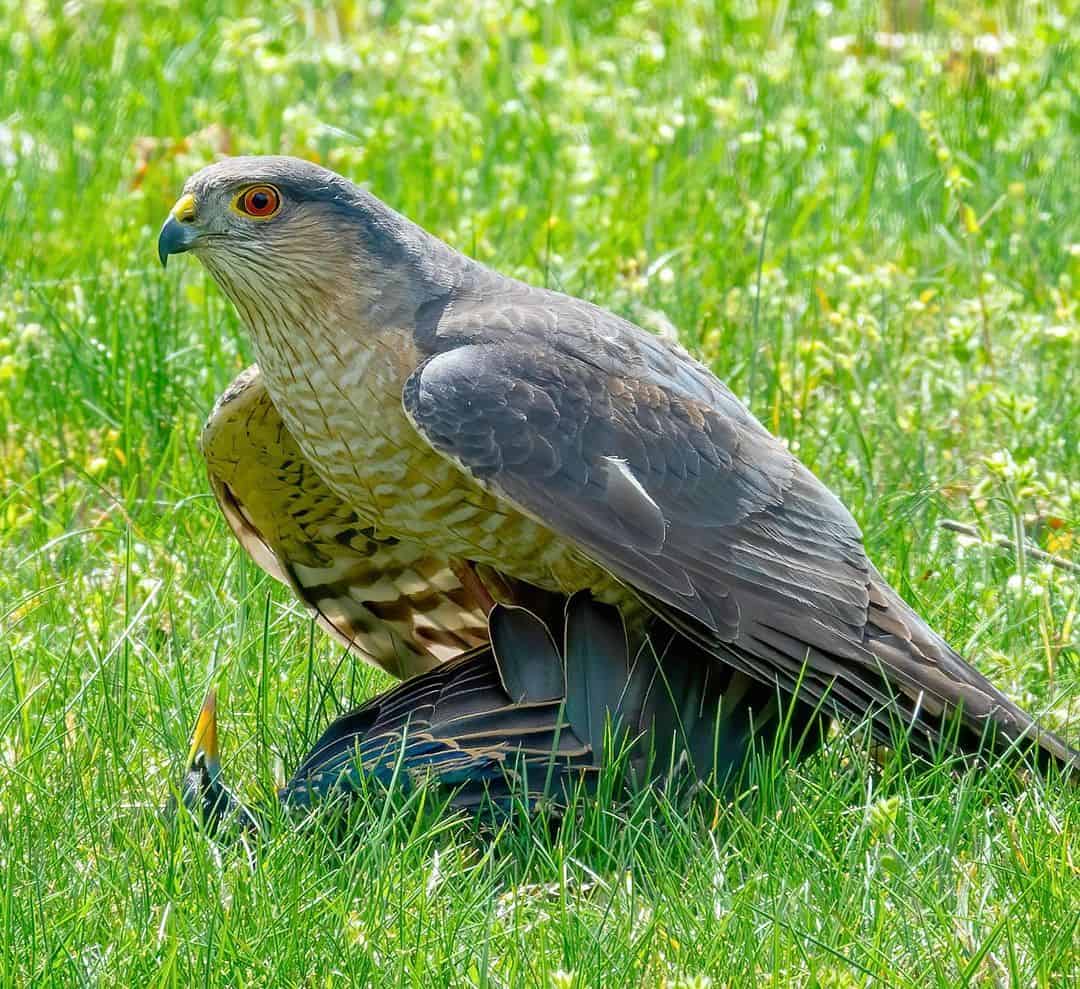 This hawk species looks very similar to Cooper’s Hawks but is smaller – the smallest hawk found in North America. Sharp-shinned Hawks also specialise in hunting songbirds but tend to go for smaller species such as sparrows or chickadees as well as smaller species of mammals like mice. This hawk species is often found hanging around properties with bird feeders in urban areas due to the abundance of songbirds – this can be very disappointing for songbird lovers!

Sharp-shinned Hawks migrate from Canada down through North America during the winter. Once they have caught and killed their prey with their talons, they will carry it to a perch and pluck out the feathers before they begin to eat it. 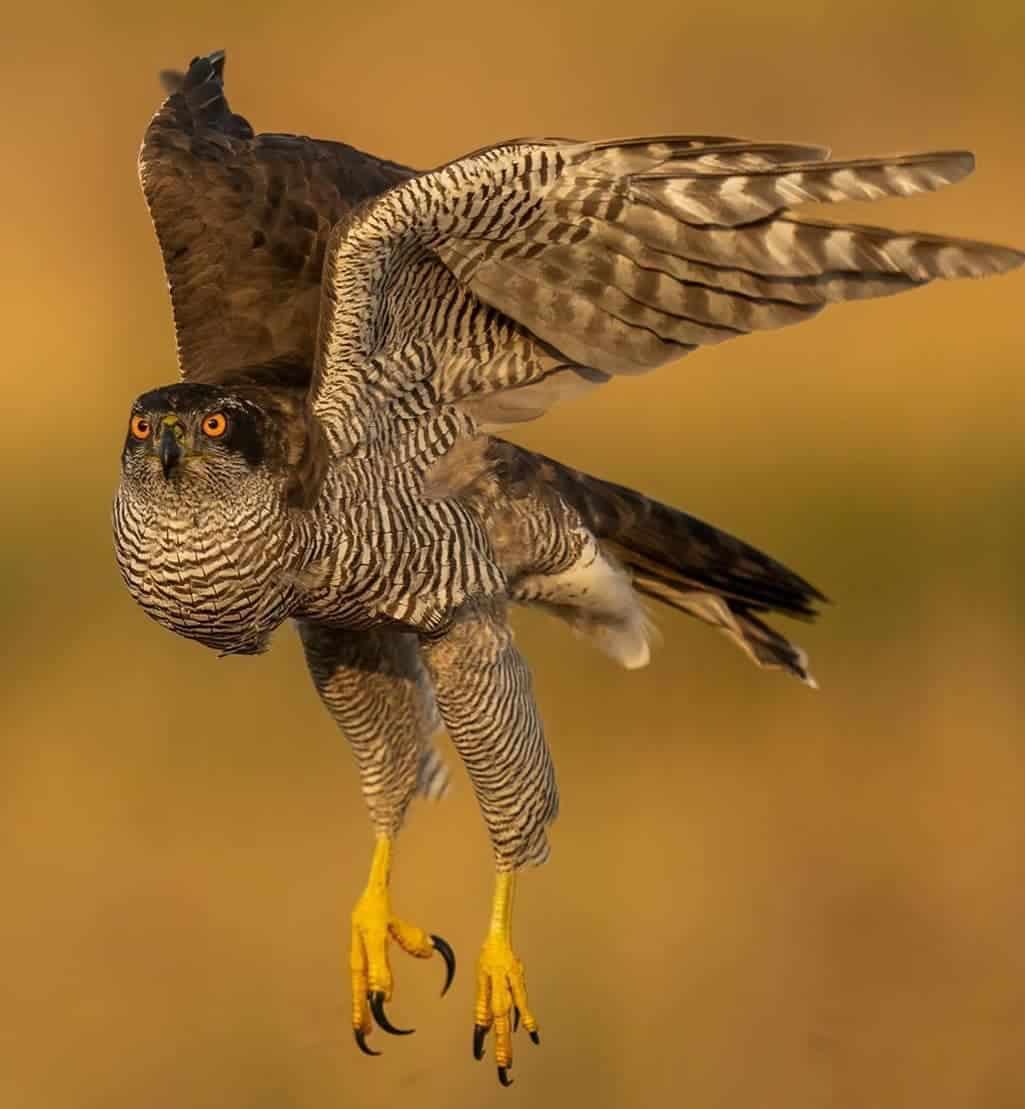 As the largest hawk species in North America, the Northern Goshawk is unmistakeable as a pale, bulky form gliding through the air or perching atop a tree. They are often found in dense, mature forests, and specialise in silent flights through the trees in pursuit of their prey.

Due to their large size, they are able to pursue larger prey items compared to the smaller Cooper’s and Sharp-shinned Hawks. Their speciality prey species include hares, grouse, woodpeckers, corvids, and squirrels. Northern Goshawks are much harder to see as they do not frequent urban areas. They can be incredibly aggressive around their nesting sites so if you find one in the forest make sure not to get too close to an active nest! 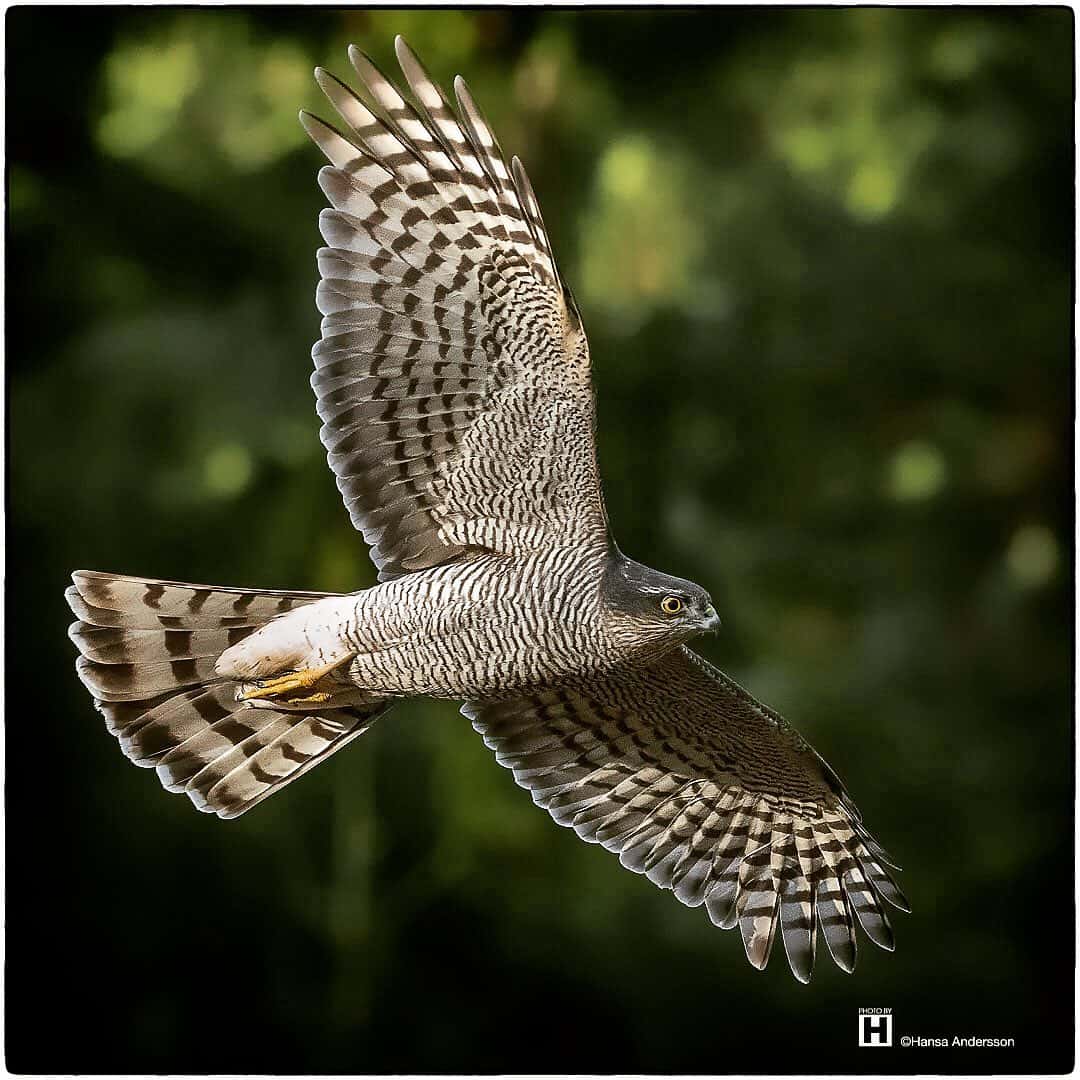 As the name suggests, the Eurasian Sparrowhawk can be found across much of Europe and Asia. They can be found in a broad range of habitats from woodlands and grasslands to farmland and urban areas. This relatively small hawk species specialises in hunting woodland birds with the much smaller males targeting finches and (not surprisingly!) sparrows, and the females going after larger species like starlings and thrushes. Both genders will also take small mammals and insects.

This species tends to use the perch and swoop method, patiently waiting for songbirds to approach and then breaking cover to surprise their quarry. Sometimes this can be followed by a swift pursuit through the undergrowth. Eurasian Sparrowhawks also swoop in at high speed on their prey from high elevations. 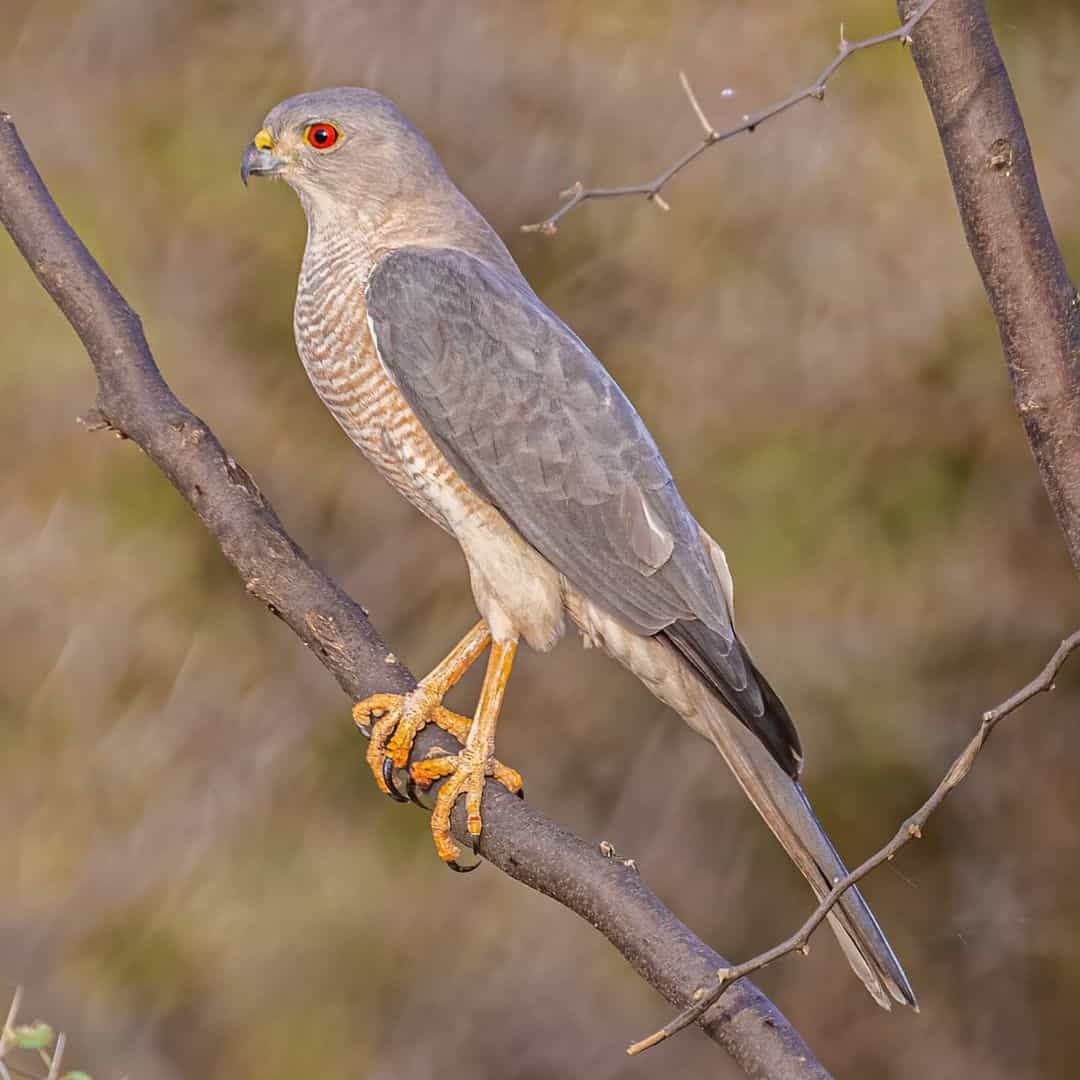 Similar in appearance to a sparrowhawk, the Shikra is a relatively small bird and can be found across much of Asia and Africa in woodlands, farmland, and urban areas. They often employ high and low soaring, scaring prey into movement and swooping on them swiftly from above. They also use the perch and swoop technique, usually catching prey at ground level rather than in flight

Shikra specialise in hunting lizards, frogs, birds, and large insects, choosing these over small mammals. This species constructs platform-like nests from sticks at the tops of trees, and lines them with softer grasses.

You can find more information, photos, and videos here.