Parrots are well-known for their intelligence and eye-catchingly bright plumage. For these reasons they are popular pets and can be very rewarding companions when provided with the right conditions and nutritious diet. There are around 400 parrot species that can be found in tropical or subtropical areas in the wild.

This sociable and vocal group of birds are famed for their ability to imitate sounds and speech, and for their flamboyant appearance and crafty behaviour. But what do parrots eat? How varied is their diet? How different is the diet of wild parrots compared to those living in captivity? In short, parrots eat a range of foodstuffs including fruit, seeds, nuts, flowers and other plant parts. Some species will even feed on carrion and other animal proteins.

Here, we will swoop in with some fascinating facts about the diet and feeding habits of both wild and captive parrots to discover more about this charismatic group of birds. We’ll be looking at some fascinating examples within the key parrot subgroups. But first, let’s find out exactly what parrots are…

Let’s dive in with the scientific definition of a parrot! The term ‘parrot’ is used to describe a number of bird groups with the order Psittaciformes including:

In order to be classed as a parrot, there are a few identifying features a parrot must possess such as a curved beak and zygodactyl feet. Most parrot species are naturally found in tropical and subtropical regions in the Southern Hemisphere, with South America containing the greatest density and diversity of parrot species in the world. However, there are some unusual species that prefer colder climates, such as Maroon-fronted parrots.

Generally, parrots are very sociable and tend to be found in large flocks. They have a reputation for being raucous and highly communicative, using loud vocalisations and feather fluttering to communicate with one another. Parrots are usually monogamous and lay eggs in nests formed in trees, cavities, rocks, underground, or even in termite mounds! Although not all parrots have the ability to mimic sounds, some such as African grey parrots can repeat noises and speech with high accuracy. This ability can be a form of social display, indicating good hearing, memory and sound production all of which may help in attracting a mate. Adopting distinctive calls may help individuals within the same flock locate one another, or avoid individuals from different flocks (more information here!).

Unfortunately, parrots are one of the most threatened bird groups – more than half the total number of parrot species are declining in number, and at least a quarter are close to extinction. This is partially due to their exploitation for the pet trade, and habitat loss among other factors. This is bad news as parrots form an important part of the ecosystems they inhabit including one critical role – seed dispersal. But does this mean they directly consume seeds? Or whole fruits? Let’s take a closer look at the diet of wild parrots…

What Do Parrots Eat In The Wild?

The main components of a wild parrot’s diet include:

But this can vary considerably depending on the species and location. Most parrot species are omnivores, consuming both plant and animal matter. They usually forage or hunt for food on the ground, although if they come across food sources in the tree canopy, they will take advantage of an aerial snack.

In general, seeds are their favourite food, making them keen granivores. This means they are important seed dispersers in a range of habitats. The curved beak of a parrot specifically enables it to break open tough seed husks. As with other birds, parrots consume fruits containing seeds, and seeds directly. These pass through their digestive systems, often whole, and are deposited in droppings throughout the environments they inhabit, ready-fertilised with the nutrients their droppings contain. Many plant species reply on avian seed dispersal to colonise other areas of habitat. Some parrot species may even actively transport seeds in their beaks or on their feet, dispersing seeds over vast areas. Sometimes, seeds partially digested by parrots have also been found to germinate more successfully than untouched seeds!

To get to grips with the details of the parrot diet, we will focus on some examples within the parrot subgroups. First up, a species representing the ‘true’ parrots…

The ‘true’ parrot group contains mostly herbivorous species, like the Blue-and-yellow macaw. This species is native to South America and can be found in woodlands, várzea forest, and savannahs. Macaws are long-lived and typically brightly colored, making them very popular pets.

The marked curvature of a macaw’s beak, and a muscular tongue make it an excellent seed predator. They will also take other plant parts like leaves, flowers, buds and fruits. Blue-and-yellow macaws have been known to consume at least 20 plants that are poisonous to humans! They have been recorded eating clay – a practice known as geophagy – to neutralize toxins in plant materials. 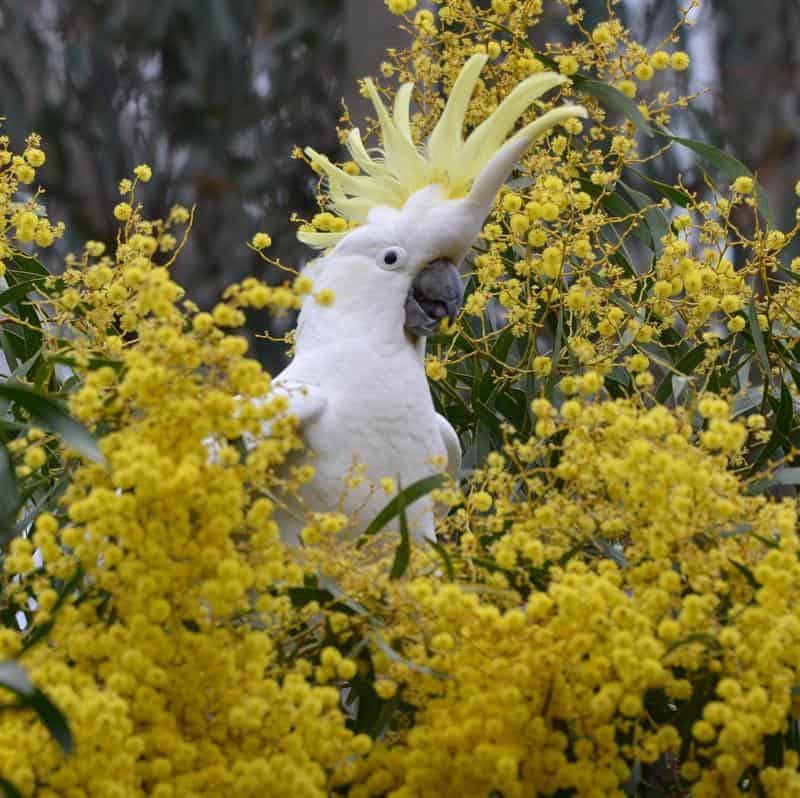 The iconic features of a cockatoo often include an impressive crest and small, curved bills. Cockatoos and omnivores and tend to favour food items including seeds, fruits, flowers and insects, but will also dig underground for tubers and corms (plant storage organs formed underground, like bulbs).

Sulphur-crested cockatoos can be found in the wild through Australia, New Guinea, and some islands of Indonesia. They consume a range of seeds including those of grass, herbs, trees and crops. As well as digging for tubers, they will forage for berries and insect larvae. 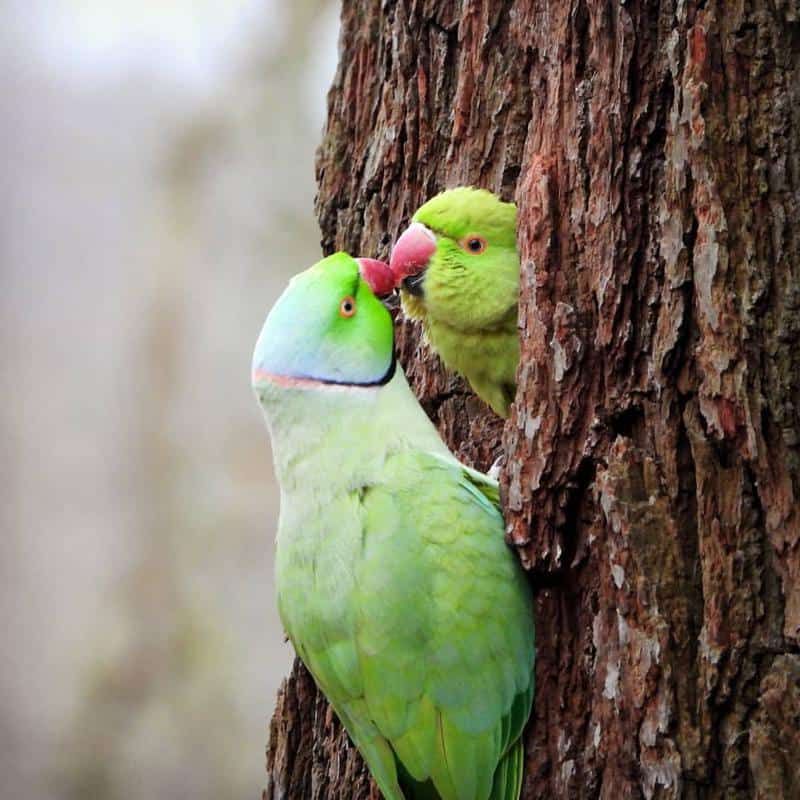 This parrot subgroup tends to be smaller in size compared to ‘true’ parrots and cockatoos. Parakeets are also primarily seed-eaters, and can be found throughout India and Sri Lanka, as well as in Australia, South East Asia, the Pacific Islands, and South America. They tend to form large, noisy groups, and are notable for their success in inhabiting disturbed and urban areas.

The Ring-necked parakeet, also known as the Rose-ringed parakeet, are mostly herbivorous, consuming a wide range of seeds, fruits, vegetables, buds, berries, nuts and crops. They can cause widespread damage in croplands and orchards if flocking in large numbers in an area. 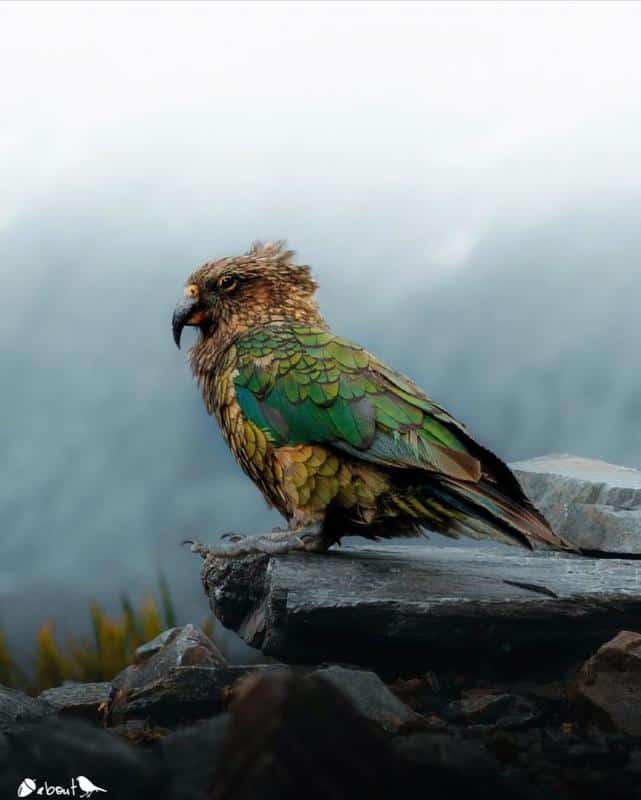 Many species of New Zealand parrot are endemic to certain regions or habitats within New Zealand. Most of these are endangered or have gone extinct in recent history. Due to their isolation in New Zealand, they have become incredibly specialised to the unique habitats found there. This makes them particularly vulnerable to land-use change and habitat loss.

Keas are large parrots which are particularly notable due to the fact they reside in forests and alpine areas – the only alpine parrot in the world! They are omnivores, consuming a range of food items including nuts, seeds, pollen, fruit, insect larvae, snails, and even other birds and small mammals. In fact, they were hunted in the past due to concerns that they were attacking flocks of sheep. Nowadays, they are a protected species and efforts are being made to reverse the population decline.

What Do Parrots Eat In Captivity?

Parrots are widely kept in zoos and as pets. They make attractive displays with their beautiful, vibrant plumage and often impressively long tail feathers. In addition, their ability to closely mimic sounds, speech and music make them entertaining and attractive companions. Captive parrots are biologically exactly the same as wild parrots, and therefore are built to consume the same dietary components.

Here, we’ll have a look at some of the main foods that are fed to parrots in captivity, and the components of these foods that make them part of a healthy, varied diet:

Please note that this list is not exhaustive and does not claim to be a guide with which to feed your pet parrot. You must conduct your own research to ensure you are providing your parrot with all the essential dietary components it requires for a healthy life.

Foods That Parrots Should Avoid!

Anything in abundance can be as bad for parrots as it is for us! The diet of wild parrots is extremely varied and they require this for optimum fitness. Captive parrots are the same but should steer clear of foods containing high amounts of salt, sugar and fat, and human foods that have been fried. Fruits that have been pre-mashed or stewed tend to contain too much sugar and should be avoided. Parrots should never consume tea, coffee or alcohol.

We hope you have enjoyed learning about parrots, this flamboyant, charismatic group of birds with a penchant for seeds. Their curved beaks make them experts at cracking open seeds, although they will feast on a wide variety of foodstuffs from fruits, vegetables, tubers and flowers, to insects and meat.

Top 33 Birds That Start With P (With Pictures)