Raccoons are mischievous-looking animals; their masks make them appear like criminals in disguise. Moreover, they’re seen as felons in most human households as they’re fond of breaking, stealing, and vandalizing properties. These pests are serious offenders in many American homes and have become symbols of trickery, deceit, and mischief in popular culture.

It’s known that most household pests are motivated by the desire to satisfy their hunger. Hence, we could probably say that raccoons do what they do for food’s sake. However, what do raccoons eat?

Considering these realities, we’ll have a detailed look into raccoons’ diet and feeding manners. This intuitive guide educates house owners on what attracts raccoons to homes and how to act accordingly.

A Momentary Synopsis of Raccoons: What Are Raccoons?

Raccoons are nocturnal mammals of the genus Procyon distinguished by bushy ringed tails. Etymologically, their names originate from a Powhatan word for “animal that scratches with its hands.”

The North American raccoon has a medium size with a striking black mask of fur across the eyes and a tail banded with 5–10 black rings. They’re stout creatures with small erect ears, a pointed muzzle, and short legs.

Typically, they measure 75–90 centimeters in length and weigh about 10 kilograms or less. However, some large males may weigh more than 20 kilograms.

The common raccoon has shaggy and coarse fur whose color ranges from iron-gray to blackish with brown overtones. Still, the smaller South American raccoon species is usually more silver. Raccoons are intelligent and curious animals, reminiscent of the character Rocket from the movie Guardians of the Galaxy. They also possess highly dexterous front feet, which are hairless and look like slim human hands.

Quick Fact: People commonly believe that raccoons wash their foods before eating if water is available, but this is a misconception. Raccoons have a habit of looking for food in or close to the water and handling it while eating, giving the impression that they’re washing it.

Raccoons have adapted to living amidst humans. Their extreme feeding habits have caused them to become one of the most prevalent pests in American households.

Habitats of Raccoons: Where Do Raccoons Live?

Food availability is the critical determinant of where raccoons live. They frequent human settlements, including towns and cities, seeking food.

Additionally, they dwell in houses and other residential buildings. The highest population densities of raccoons are found in cities.

Outside human housings, they occupy various forest and grassland habitats. Their territories are often near water bodies, for instance, riverbanks. They may also inhabit logs, hollow trees, or abandoned beaver dens.

Other places that may form the habitats of raccoons include:

In summary, the factors that affect raccoon’s habitat choice are

Raccoons are indigenous to North America. You may find the common raccoon in:

Through intentional introduction in the mid-20th century, raccoons are also distributed in mainland Europe, the Caucasus region, and Japan, where they’ve become a nuisance.

Nutrition of Raccoons – What Do Raccoons Eat?

Though they’re listed as carnivores in some theses, raccoons are omnivorous mammals. They feed on both animal- and plant-based food sources, including:

In a way, these masked animals consume a balanced diet. This “nicety” is achieved by fairly incorporating plant matter, invertebrates, and vertebrates into their diet.

Raccoons aren’t the best hunters. So, most times, they conserve energy by going after easy prey, like insects, worms, frogs, and small rodents. They tend to consume slightly more invertebrates than vertebrates because the former is more accessible and will also feed on carrions if available.

These opportunistic omnivores will eat almost anything they can lay their hairless hands on and consider food. They’re fond of stealing bird eggs and dashing off with nestlings.

When food isn’t available, they can travel miles per night looking for what they can eat. Male raccoons prefer foraging alone, while the females are often pregnant or accompanied by their young.

Location plays a critical role in raccoons’ food choices, especially their plant preferences. For instance, raccoons in Europe may consume a specific plant-based diet more often than their American counterparts.

What Do Raccoons Eat in the Wild?

Wild raccoons mostly occupy forests, woodlands, and grasslands. They reside near freshwater bodies in the woods and forests, such as rivers and ponds. Here, they hunt for food along the water’s perimeters.

They enjoy eating animals that live near or in the water, such as:

These bushy ringed tail creatures typically prefer feeding on animals that dwell in shallow waters and will prey on turtles and snakes if they can easily snag them.

Other food sources that constitute the diet of wild raccoons include:

Yes, raccoons eat birds after a successful catch. They also steal and feed on bird eggs.

Although they aren’t excellent hunters, they may go after small rodents during food scarcity.

Yes, raccoons eat rats and even mice when they’re available.

As opportunistic omnivores, raccoons eat squirrels if they’re able to lay their hands on them.

Although not as often as they eat smaller rodents like mice and rats, raccoons also eat rabbits.

Yes, wild raccoons will eat tomatoes and other farm products.

What Do Raccoons Eat in Human Settlements?

A plethora of food options are available for raccoons in human territories. Thus, neighborhood raccoons are twice larger than their wild counterparts on average.

Raccoons are numerous in urban and suburban areas because more humans typically means more food sources will be open for them.

They are well-adapted to living in human societies and will frequently covet and steal pet food and feed on:

These pests often raid trash cans, searching for food and eating leftovers among the garbage. Indeed, raccoons will eat almost anything as long as it doesn’t contain mildew or rot.

Raccoons drink from fountains, pet bowls, and other sources for their water needs.

It’s doubtful that raccoons eat cats as they don’t see them as prey. However, one can’t completely rule out the possibility of the opportunistic bandits going after kittens.

One factor contributing to the success of raccoons in towns and cities is their natural predators’ absence. So, apart from human interference, raccoon activities aren’t significantly checked by other animals. These furry culprits have become notable pests in big cities like New York and Toronto.

What Do Raccoons Eat In Captivity?

Although most animal experts are against having a raccoon as a pet due to their troublesome feeding habits, some individuals disregard the advice and go on to pet raccoons. For what it’s worth, owning a pet raccoon is perfectly legal in the United States.

Some people are big fans of raccoons because of their cute looks and the interesting ways they use their “hands.” So, what do raccoons eat in captivity? Let’s find out.

The nutrition of captive raccoons, including those in zoos and wildlife refuges, is pretty similar to those roaming free.

Food options for captive raccoons include:

Additionally, they require a bowl of water for drinking. You may also catch a glimpse of raccoons eating grapes in zoos and wildlife refuges.

What Foods Are Unsuitable for Raccoons?

Although it’s commonly assumed that raccoons can eat almost anything, certain food items are either toxic or detrimental to their health. The following list covers food sources you shouldn’t offer raccoons and reasons why:

What Do Baby Raccoons Eat?

Like other mammals, baby raccoons drink milk until they’re old enough to eat other food. Mother raccoons tend to regularly go out to forage for food to produce sufficient amounts of milk for their babies.

Their babies, who’re blind and mute for the first three weeks, are breastfed every four hours. After six weeks, baby raccoons can start consuming solid food sources, such as:

Baby raccoons can leave their nest to seek food after about 12 weeks of nursing.

At home, you may feed baby raccoons healthy milk with high-fat content. 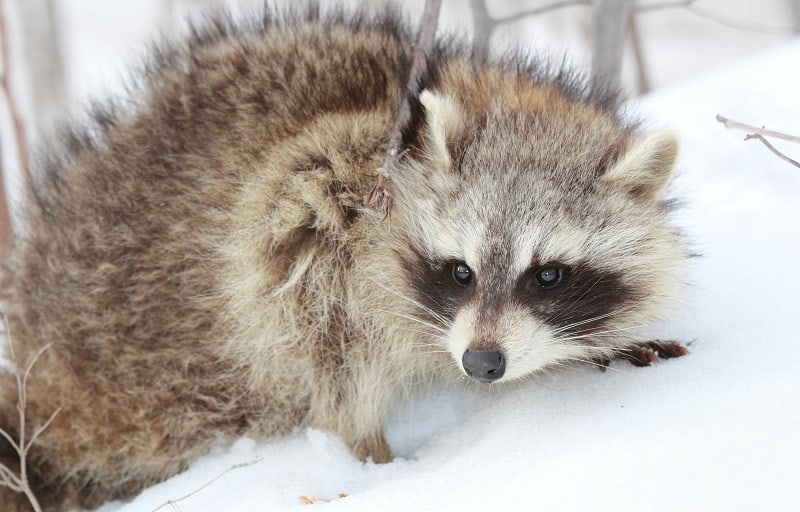 Raccoons’ food choices and feeding habits vary with different seasons. For example, raccoons eat voraciously during the spring, summer, and autumn in preparation for the winter.

The following sections provide a detailed outlook on how these fuzzy creatures’ diets vary across seasons.

In the summer months, raccoons have the most varied diet. Their food at this period consists of:

Some typical fruits available for their consumption during this period include:

On the plus side, their propensity to consume a lot of fruits in the summertime may lead to seed dispersal throughout the environment.

Raccoons need to build an adequate amount of fat during autumn for the less favorable winter months when food becomes scarce. Consequently, they become considerably fatter in the autumn months as they keep up their ravenous nutrition.

Winter is the most crucial season for raccoons in nutrition and activities. The winter months are characterized by food scarcity and cold weather. So, raccoons are forced to stay indoors during this period.

Though they don’t hibernate like many other animals, they significantly decrease their activity level to forestall needless energy wastage.

By spring, food options become open again for raccoons. As a result, their energy bars become high, and they lose much of the weight they gained during the autumn months, possibly half of it. They begin foraging for food again and live as opportunistic omnivores.

Due to their problematic feeding behaviors, raccoons are considered one of the most annoying mammalian pests in the US and neighboring regions. They’re also a significant cause for concern in the foreign areas like Japan and Europe, where they were introduced.

As nocturnal animals, they become active at night, constituting various forms of nuisance in their search for food.

Some pesky actions of raccoons include:

Worse still, raccoons are vectors of several diseases. Notably, they’re a significant carrier of the pathogens responsible for rabies. They may transmit this currently incurable disease that affects the central nervous system to humans following contact.

In addition, raccoons carry roundworms in their feces. Humans may pick up these parasitic worms from contact with infected raccoon excrement.

Raccoons also transmit a bacterial infection, leptospirosis, through infected urine or contaminated water or soil. This disease can cause the following if left untreated:

Though raccoons are known to fight off some potential predators fiercely at times, their usual natural predators include:

Several people consume raccoons as food, particularly in the US, where they’re numerous. Historically, a plump raccoon was once sent as a gift to the then President Calvin Coolidge for his Thanksgiving dinner. However, he and his wife, Rebecca, decided to keep it as a pet instead.

People who’ve eaten prepared raccoon meat claim that it has a “good” taste, similar to dark meat chicken or turkey, but greasier and tender.

Additionally, some individuals use raccoon meat to prepare their stew. The famous writer, Mark Twain, stated that the raccoon was among the animals he missed eating in America.

Raccoons have rather striking feeding behaviors that help them thrive in the wild, in human territories, and in captivity. Their ability to adapt to various conditions when searching for foods enlists them as one of nature’s best food finders. Indeed, their incredible intelligence plays a vital role in their dietary habits.

However, you may need to take appropriate pest control measures against these masked bushy-tailed outlaws to prevent property damage and the contraction of the diseases they spread. Properly store leftover food, put your garbage in a secure construction, and endeavor to reach out to a proficient pest control team when necessary.

You may also want to keep your household animals, including pets, away from free-roaming raccoons. Meanwhile, if you keep pet raccoons, regularly take them to a qualified veterinarian for vaccinations, examinations, and treatments.