Seagulls, or gulls, are one of the most common groups of birds found in coastal areas or urban areas. They are perhaps most famous for their squawking cries or their cheeky antics in stealing people’s food. But did you know there are actually over 40 different seagull species? And that they have a broad range of diets depending on species and location?

These resourceful scavengers will make the most of the area they inhabit by exploiting a range of different food sources, everything from fish, meat, and insects to seeds, vegetation, and many human foods. In fact, seagulls are possibly the least fussy group of birds in terms of diet – they’ll eat pretty much anything they can get their bills on!

Join us as we explore the dietary requirements of seagulls, their feeding habits and the adaptions that make them incredibly resourceful hunters and foragers.

To begin with, let’s define exactly what a seagull is…

Well, first of all, seagulls are more correctly termed gulls because they do not exclusively live by the sea. They are part of the taxonomic family Laridae which also includes some other common bird groups like terns and skimmers. There are many seabird groups that people will colloquially term gulls, and the classification of gulls is controversial in the biology world/ Most gulls are generally considered to be those within the genus Larus but the term covers multiple genera.

Today we’ll be focusing on the most common types of gulls, defining their diet and food-related behaviour, and helping you to identify some common gulls and some less common, intriguing species.

This common group of gulls encompasses all the herring gull-like species of which there are 18 spread across the world. You are most likely to be familiar with gulls from this group, as they are highly adaptable and often occur in towns and cities.

Most of these gulls are relatively large birds with white and grey coloration, webbed feet, and fairly long, stout bills. They are long-lived (potentially up to 50 years!). This group includes Herring gulls, and Lesser black-backed gulls.

Depending on where you live, the most common gulls are probably the American (if based in America) or European (if based in Europe) Herring gulls. These are some of the largest gulls with pure white heads, necks, breasts and underbelly, and light grey wings. They also have black-tipped tail feathers, and yellow bills, legs and feet. 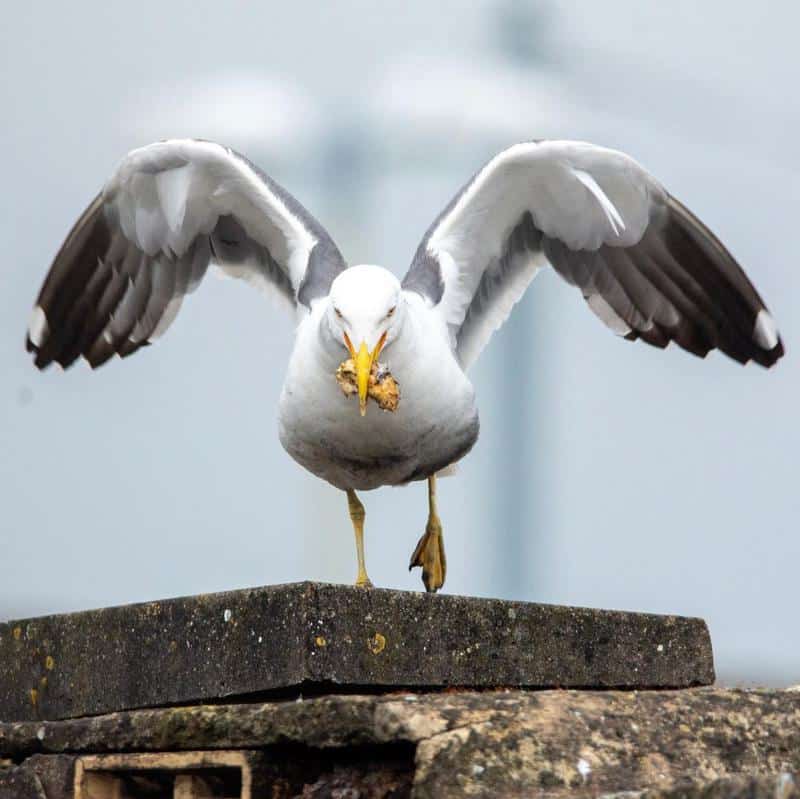 Herring gulls usually nest in colonies, on the ground or on rocky cliffs, near water. They are incredibly opportunistic, taking advantage of many habitats and food sources, and are often found scrounging around garbage dumps, parking lots – anywhere where they can find scraps of human food.

These gulls are the most likely to steal your chips or fries as you try to enjoy them down at the seaside! In some places, they have become a nuisance when their scavenging behaviour becomes too bold and they bother anyone with a source of food.

What Do Gulls Eat?

In short, pretty much anything they can find! Gulls are omnivorous and opportunistic creatures. They require a high-fat and high-protein diet, and will typically eat food weighing around 20% of their body weight every day!

In their natural habitat, around coastal and open seawater areas, gulls will hunt and forage for food items including:

When hunting in the sea or on freshwater bodies, gulls tend to forage from the surface of the water and do not dive deeply into the water like some other seabirds. Larger species of gull are able to catch larger prey, and some will even go after other birds. Their vision is excellent, like all bird species. However, unlike many birds, their eyes can move within the sockets, helping them to seek out food sources in the landscape below them. They can hunt both on the ground and whilst in flight, and young gulls learn hunting techniques through watching the adults hunt.

Flying insects, such as flying ants, are a common food for gulls during the summer months. Gulls hawk insects in the air – they catch them on the wing.

Foods that are hard to access like molluscs are sometimes carried into the air and dropped from a height to help the shells crack open. A gull’s foraging success increases as it gets older and more experienced – they continue to learn and adapt throughout their lives, a sign of great intelligence.

Gulls are able to unhinge their jaws in order to swallow food whole! This makes a great range of food accessible to them, and allows them to transport vast amounts of food to regurgitate and feed their chicks.

Gulls living closer to human environments can be found foraging in farmland, picking up scraps of leftover crops such as wheat and maize, and searching for insects and small mammals. Often, gulls will follow tractors on newly ploughed or disturbed fields, scouting for the worms and ground-dwelling insects the tractor uncovers.

Urban gulls can be found in cities all over the world, and some have taken to nesting at the top of tall buildings due to their resemblance to tall sea cliffs. This also allows them to escape from ground-dwelling predators like foxes, a factor which is partially responsible for their increasing urban population. In residential areas, gulls scavenge garbage dumps, trash cans, parking lots, all areas where it is possible to find leftover food. Here, gulls will take food items including:

Gulls are super smart birds. They will watch the way in which other species forage and even the way in which their natural predators forage, and learn from this behaviour. This is the case with humans too – gulls watch human behaviour and learn to search for or avoid certain food sources. One study found gulls may prefer food handled by humans when presented with the option!

Although they will readily feed on fatty, and carbohydrate-rich foods like bread and chips/fries, these food do not contain a lot of nutrients and will lead to bad health if they are the primary foods consumed. Like us, gulls require a varied and balanced diet in order to thrive.

Despite their success in out towns and cities, most gull species’ numbers are dropping due to natural food shortages. Fishing practices in many parts of the world have intensified and this has serious implications on many seabird populations. Disease is another factor affecting gull populations both in the wild and in cities.

What Do Baby Gulls Eat?

Both gull parents will incubate the chicks, and then feed their chicks in the nest once hatched. Adult gulls regurgitate soft, easily digestible ‘pastes’ from their stomachs, formed from the food they have scavenged. Their digestive systems process this food, combining it with water to make it palatable for the chicks. They are fed between 3-6 times per day which is less frequent compared to many other bird species. 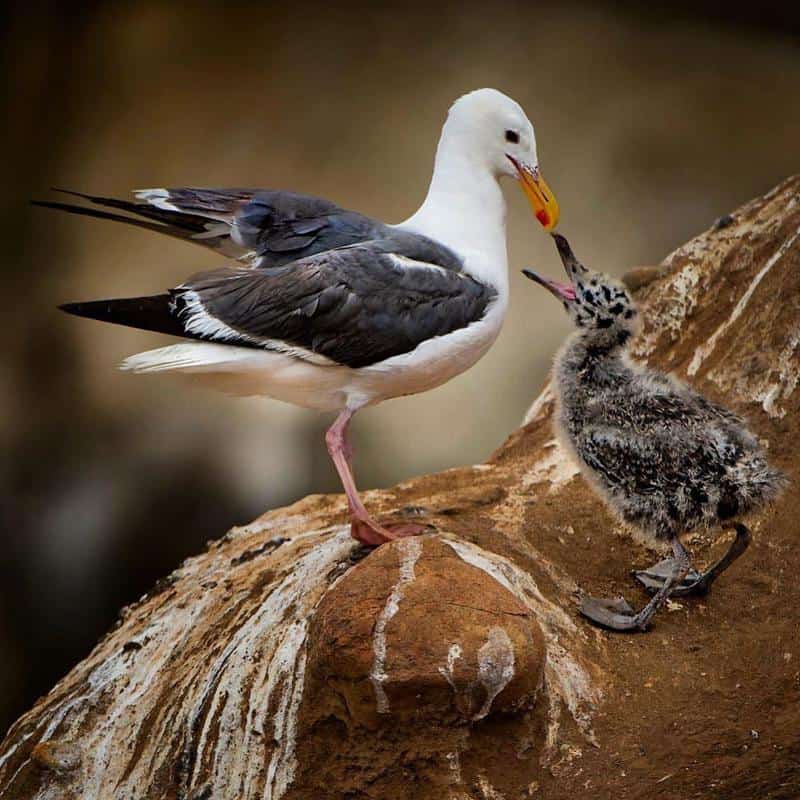 It takes around 6 weeks for the baby gulls to fledge but the parents may continue to feed the babies for a time even after fledging, sometimes up to 2 months. Young gulls will stick with their parents for several months after fledging, learning hunting and foraging, and increasing their chances of becoming a successful, healthy, breeding adult.

A Focus On Some Interesting Gull Species And Their Diverse Diets 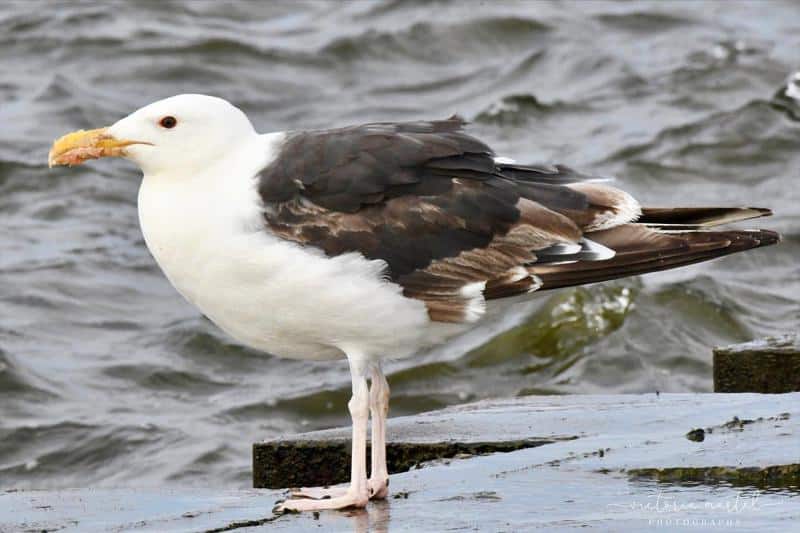 These giant gulls live up to their name as the largest gull species in the world. Their wings are broad and dark grey while their heads, necks and underbellies are bright white. Their bills are lemon-yellow with a bulbous orange nodule.

Greater black-backed gulls are another familiar urban species. They will also opportunistically follow fishing boats and pick up fish parts or dead fish which are thrown back into the water. They can often be seen patrolling areas of garbage and along beaches, keeping an eye out for anything edible.

This species is perhaps one of the meanest – it will harass other seabirds to steal their catches, and will often prey on other birds including their chicks and eggs. They can be found throughout much of Europe, and north-eastern USA. 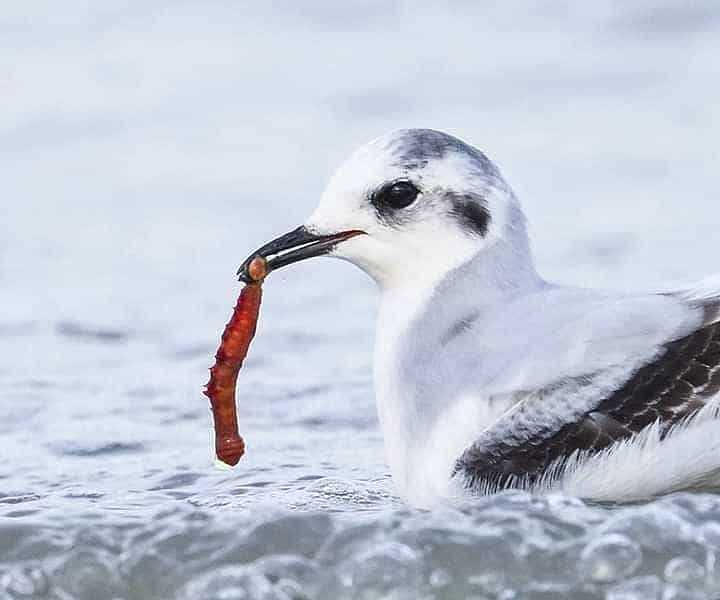 From the biggest to the smallest gull in the world. A compact and rather cute species of gull. The breeding adults have a black head which is absent in non-breeding individuals. The coloration of the plumage is otherwise white and pale grey. The legs are an eye-catching scarlet red. Little gulls can be found mostly in Eurasia with some occurrences in the USA. They tend to breed in marshy, inland areas and move to off-shore, coastal areas during winter.

It has short, rounded wings which make it well-adapted for manoeuvrability when soaring low over the water, plucking prey from surface waters. Little gulls will concentrate mainly on aquatic insects and invertebrates, and small fish. 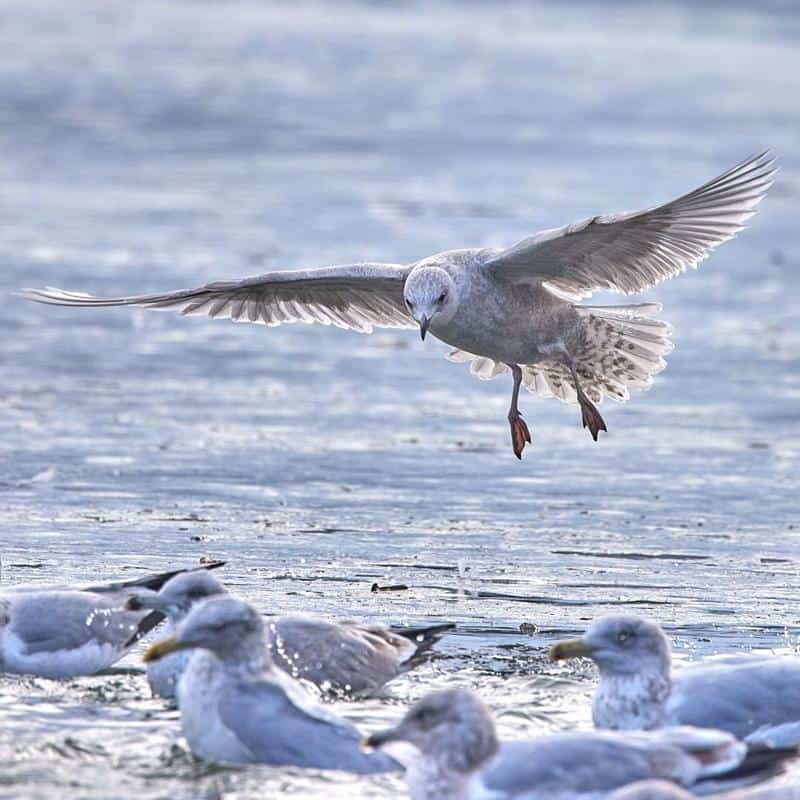 These gulls have very variable plumage with coloration varying from pure white through pale grey to charcoal. Iceland gulls are medium-sized and their coloration is clinal in its breeding area (the Arctic) – it tends to vary from darker in the west to paler in the east.

During winter, they migrate and can be seen along coastal areas of North America and Europe, primarily towards the north. They breed in the Arctic on rocky cliff ledges, and specialise in gliding over the water, picking up marine fish close to the surface without landing. Often they can be found in mixed flocks with other species such as herring gulls. 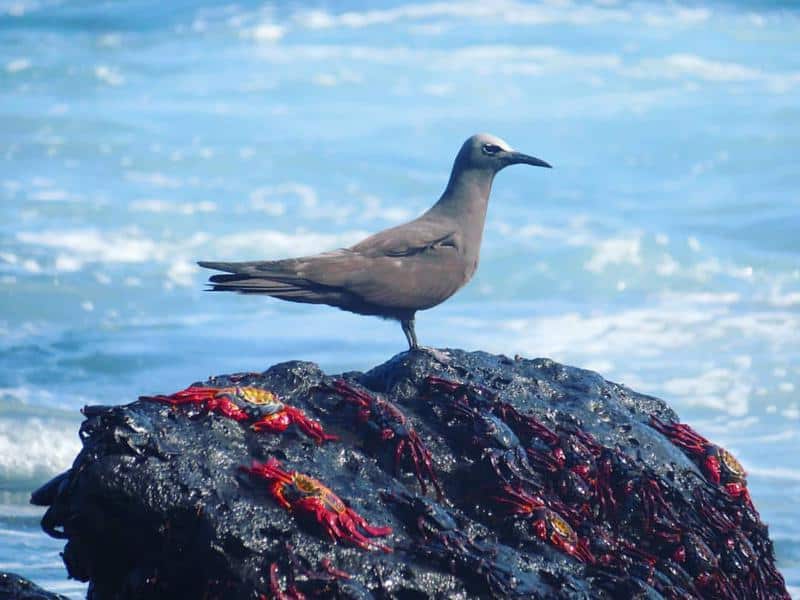 Also known as the Dusky gull, this unusual species is endemic to the Galápagos Islands. It has an ash-grey body with a darker, charcoal-colored head, tail feathers, legs and bill. The Lava gull hunts and forages primarily along the coastline, and does not tend to venture inland or far out to sea.

This species takes advantage of the accumulation of fish parts and small fish around fishing vessels, and will take chicks and eggs from other birds’ nests. They will even invade the nests of iguanas, turtles and lizards, preying on the newly hatched young. There have been observations of them consuming the placentas of sea lions!

Lava gulls are classified as vulnerable by the IUCN, and there are less than 1000 individuals left in the wild. 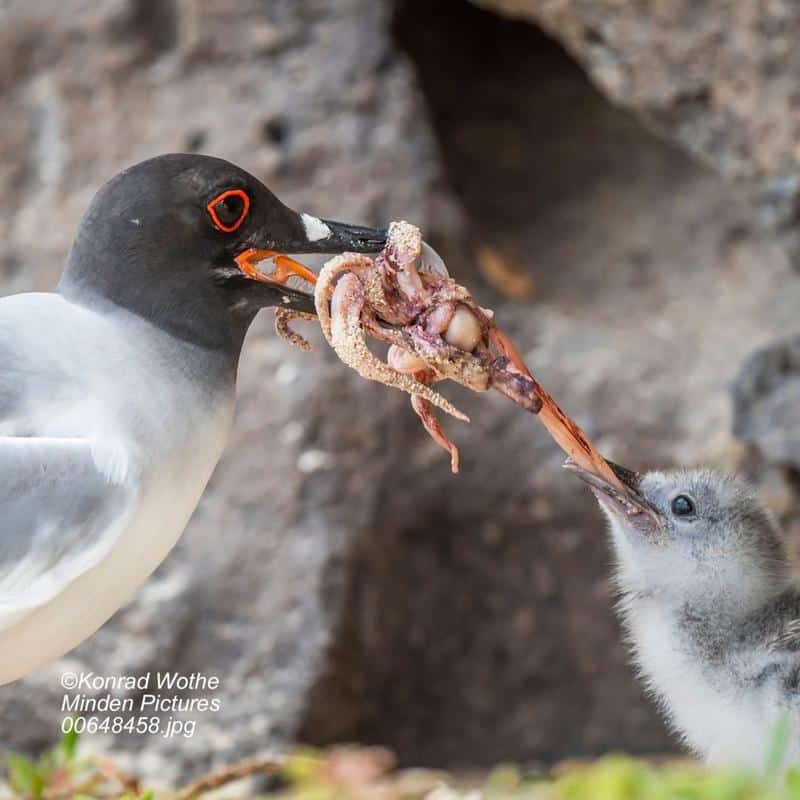 This species of gull is very distinctive with clearly defined plumage coloration and a graceful, forked tail reminiscent of a swallow. The heads of breeding adults are black, and the eyes are circled with striking orange. The bill is black with a white tip and the legs are red-pink.

The Swallow-tailed gull is another species that breeds in the Galapagos Islands, but travel along the coast and offshore waters of South America down to Chile during the winter. They nest in colonies on lava plains and rocky cliffs, and vocalise loudly to communicate and warn others in the flock of a predator approaching. Unusually, this species hunts and feeds at night – the only species of nocturnal gull, targeting marine fish and squid primarily.

If you would like to find out more, take a look here.

Can you own a pet seagull? Is It Even Legal?

[…] Seagulls are scavengers and will eat just about anything. In the wild, seagulls eat: […]