Tilapia are among the most satisfactory fish for fish farming due to their accelerated growth pattern in warm water,  ease of breeding, tolerance for low-quality water, and feeding flexibility (both for natural and artificial food).

Tilapia feed on a wide variety of food sources, although there are differences in nutritional requirements depending on the growth stage and species.

For example, the young Tilapia are opportunistic and omnivorous feeders, while the adult Tilapia are primarily herbivorous. Some species are better equipped for plankton harvesting than others, and so on.

In this article, we’ll make a brief introduction into the Tilapia’s feeding habits, nutritional requirements, and examples of food sources both natural and artificial.

Let’s Get Acquainted With Tilapia 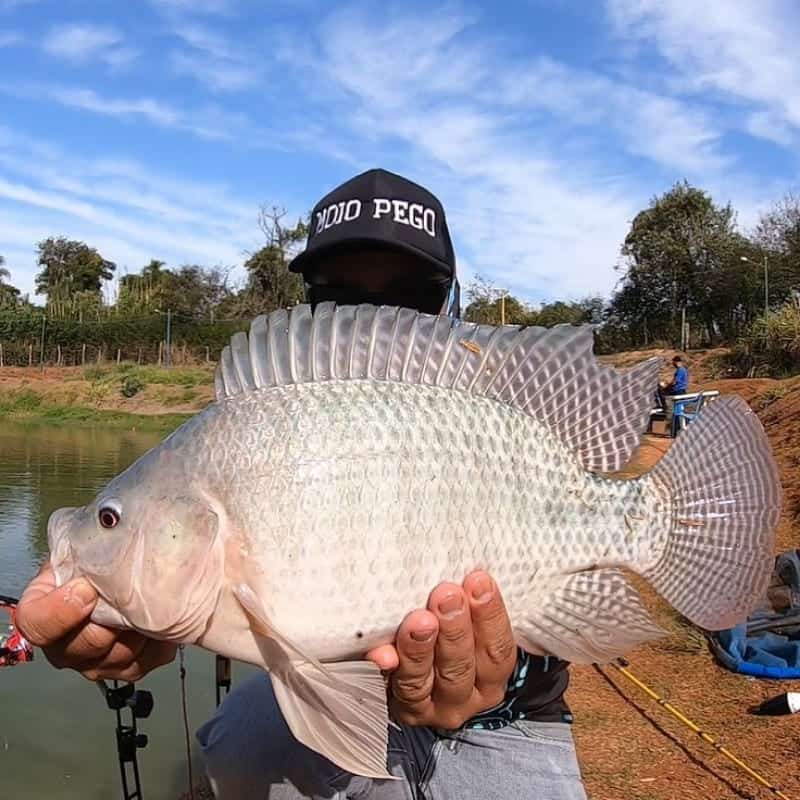 Over a hundred species of cichlid fish are considered under the common name Tilapia, with Coptodonini and Oreochromini being the genera of highest economic importance.

Tilapia habitat consists of freshwater bodies including ponds, rivers, lakes, and shallow streams. Rarely, some species live in brackish water (a mix of salty and freshwater).

Tilapia thrive only in warm waters: the lowest tolerance temperature is seven degrees Celsius (only for the species Oreochromis aureus).

Most other Tilapia species do not survive in waters colder than eleven to seventeen degrees Celsius.

The appearance of Tilapia is similar to the Carp fish, with a chunky body, and distinguished by the interrupted sideline, a characteristic typical to Cichlids.

The coloring of Tilapia varies not just among species but is also influenced by the stage of sexual maturity, environment, and food origin; all these could influence the coloring and patterns of the Tilapia.

Due to their feeding preference for food sources lower down in the food chain, the Tilapia do not accumulate toxins (such as mercury) in their flesh as readily as predatory fish, for example.

What Tilapia Eat In The Wild

The gills of Tilapia secrete a slime that catches the plankton called the bolus (a mix of slime and plankton). This is then swallowed and goes into the intestines, where the nutrients from the plant material are assimilated through digestion.

While some species could be more efficient at plankton foraging than others, the ability of Tilapia to digest algae (filamentous or plankton) and juicy higher plants is due to two adaptations:

Although the green algae are digested less efficiently than blue-green algae, thirty to sixty percent of the algae protein is assimilated by Tilapia.

Despite the Tilapia’s efficient feeding on detritus, their feeding is not as aggressive as Carps’ when it comes to pond bottom-feeding – they make only minor disturbances.[1]

The recently hatched Tilapia feed on tiny organisms that float on top of the water (detrital and neuston).

As they grow, Tilapia switch from feeding on the surface of the water to beneath the surface, where they forage for periphyton (a blend of algae, microbes, cyanobacteria, and detritus).

Even with their herbivorous fish label, the young Tilapia have been observed feeding on larval fish, insects, worms, and small fish in the wilderness.

Despite the rumors, Tilapia do not eat feces, not exactly. Although, some farmers starve Tilapia on purpose, to use them as cleaners of hog manure, for example.[2]

We will get into more details about the phenomenon of Tilapia eating feces later.

What Tilapia Eat In Fish Farms

Tilapia is a widely appreciated fish in many countries, the United States included, where they occupy fourth place as the most consumed fish.

The ease of breeding and ongoing care, along with the accelerated growth and the wide variety of consumed food, have made Tilapia one of the most important fish species in the pisciculture sector.

One of the most common foods for commercial Tilapia is pellet food; these are cooked and pelletized food formulas made out of rapeseed, soy, wheat, or rice.

Ingredients like fish meal and soy-based protein are added into the pellets for Tilapia to increase the quantity of protein (up to forty percent).

Although a bit more expensive, the floating pellets are more highly recommended for feeding farmed Tilapia, as the farmer can monitor how much the fish stock eats and clean up the leftovers.

As a bonus, the pellets come in different sizes, depending on the fish development stage: small grain for new hatchlings, bigger grains for the juveniles, and large pellets for the adult fish.[3]

Therefore, Tilapia should be fed pellets only when the fish is developed enough to swallow the smallest pellets.[4]

To reduce the costs or to speed up the growth of Tilapia, some farmers supplement the pellet feeding with other types of nutrients.

Duckweed is an aquatic plant floating on or right beneath the water surface, rich in proteins and vitamin C, contributing to a Tilapia’s healthy diet.

Therefore, duckweed is often used for Tilapia feeding, not just to reduce costs but also to maintain the general health of the fish.

Although enough duckweed can ensure the necessary protein and the fish won’t require other supplements, it’s an invasive plant that could “suffocate” the body water.

It’s recommended to keep the duckweed in a separate container and clean the leftovers after feeding to avoid the excessive multiplication of duckweed in the Tilapia pond.

Even though alfalfa (also known as lucerne) is an excellent source of protein, vitamins, and minerals, all suitable for Tilapia, whether it should be fed dry or fresh alfalfa still seems to be a matter of debate:

Some do not recommend feeding fresh alfalfa to Tilapia as it can cause bloating, and they encourage the feeding with dry matter instead.

In contrast, others say that it is ok to feed Tilapia freshly cut alfalfa because the fish can digest it without getting bloated.[5]

If we apply the saying “better safe than sorry”, the safest bet is to feed Tilapia dry alfalfa, as it contains almost the same nutrients as the fresh matter, making a great food supplement that will not bloat the fish.

Since the adult Tilapia are predominantly herbivorous, they eat vegetables like lettuce, peas, spinach, and root vegetables.

Some of them can be fed raw (like lettuce and peas), while others are perfect for mashing into a puree, improved with a protein mix (fish meal or seafood mix).

The improved puree is served dried, as pellets, and fed to Tilapia daily, but it is also beneficial to have raw veggies included in their diet.[6]

Tilapia would eat grass clippings, leaves of Sengon albasia, or the raw leaves of many legumes, but this is only if they do not have other sufficient food sources.

Besides the duckweed, and algae, some aquatic plants are also on a Tilapia’s favorite food list.

However, Tilapia would feed on these plants mainly as a supplement to their regular diet or in its absence – duckweed remain their firm favorite aquatic plant.

There is a good reason fishermen use worms as bait: fish simply cannot resist them, and small red earthworms are the best for Tilapia.

Due to their high protein content (an estimated sixty percent), earthworms are an excellent supplement for Tilapia.

However, even with a continuous supply of rotten manure to raise the earthworms, their harvesting for feeding Tilapia could take some time and effort.

Tilapia might also eat other worms, such as maggots (from decaying food, for example). But, it is questionable how healthy that is for fish, considering the high level of fats they contain.

Although earthworms remain their favorite insect food, Tilapia will not turn down other little creatures they share the environment with.

Tiny insects such as solder fly, flies, bugs, mosquitoes, and larvae are likely to fall prey to Tilapia.

If Tilapia are not fed enough, they will prey on smaller fish, including their own kin: adults eating juveniles and juveniles eating hatchlings.

While the parents eat their offspring mostly in extreme starvation, the danger of Tilapia cannibalism often comes from the non-breeding adults and the older siblings.

Tilapia do not have a particular taste for flesh, but if they are hungry, they will eat pretty much any fish they share the habitat with.

The condition is for the prey to be small enough to fit in the Tilapa’s mouth and be swallowed, preferably whole.

Tilapia cannibalism could also appear due to high stock density, too many generations living together, or irregular temperature of the habitat.

In some Asian countries, farms practice Tilapia starvation to “force” the fish to eat hog manure.

Regardless, Tilapia does not simply eat raw manure; the feces are first decomposed and assimilated by the phytoplankton and zooplankton, naturally present in the pond/tank.

Broken down manure feeds the plankton, and the increased plankton feed the Tilapia, both adults and especially hatchlings.

Tilapia fed with manure or other types of feces are not usually destined for human consumption, having more the purpose of cleaners.

How Much Do Tilapia Eat

The amount of food Tilapia consume depends on the age of the fish and the temperature of the water:

Tilapia metabolism slows down in cold water so that the fish will eat less and grow much slower. If the temperature drops lower than seventeen degrees Celsius, Tilapia stop eating.

If the water is warm, their metabolism will accelerate, the fish will be more hungry, eat more, and grow faster. This is why some Tilapia farmers warm up the fish water tanks – to boost their growth.

Despite their usual herbivorous behavior, Tilapia have high feeding flexibility, depending on the stage of development and the level of hunger.

In fish farms, Tilapia eat vegetable pellets enriched with protein mix (fish meal) and supplemented with duckweed or other veggies.

Tilapia feed on algae, duckweed and other aquatic plants (roots included), phytoplankton, and zooplankton in the wilderness.

However, Tilapia will eat insects and other smaller fish (their own kin included in extreme situations) if they are hungry enough. Tilapia only need the prey to be small enough to fit in their mouth so they can swallow it directly.

Tilapia do not eat feces. The manure will be first decomposed and assimilated by the plankton before the Tilapia consume it.