Turkeys are among the most traditional birds raised by humans. There’s hardly anyone who hasn’t heard about these gobbling birds. At the very least, Thanksgiving Day and Christmas prompt people to remember them. However, what do turkeys eat?

Studying these creatures’ nutrition mode and habits is vital since they’re highly involved in the culture of many countries. In this light, we’ll cite some facts about turkeys and what they eat. This piece also provides adequate knowledge on how best to feed these birds and shield them from malnutrition.

Some Noteworthy Points About Turkeys

Turkeys are large land birds of the order Galliformes. Two families, Phasianidae and Meleagrodidae, constitute the group of birds called “turkeys.” We’ll focus on the common turkey (Meleagris gallopavo), a traditional North American game bird which has been widely domesticated.

Some research suggests that the indigenous Indians of Pre-Columbian Mexico played a critical role in domesticating turkeys. These birds were subsequently taken to Europe, where more bird breeds emerged in the 16th century. Afterward, English colonists introduced the European breeds of turkeys to the US in the 17th century.

Turkeys are usually dark-colored with colorful bronze and green plumage.

Fun fact : Do you know that turkeys were reared for their varicolored plumage until 1935 when their breeding purpose changed to meat gain?

Common turkeys also have a long red fleshy attachment—snood—extending from their forehead over their beak. Other distinct characteristics of these beautiful creatures include a wattle growing from their throat, a black beard projecting from their breast, and appendages—known as spurs—protruding from their legs.

The birds show a considerable sexual difference in terms of size. The males are significantly larger, with a typical length of about 130 cm (50 inches) and an average weight of 10 kg (22 pounds). Meanwhile, female turkeys are about half the size of males.

Similarly, male turkeys gobble and strut their fan-shaped tail as courtship behaviors, explaining why some refer to them as gobblers. Additionally, they’re more colorful and possess more warty heads.

The domesticated breeds of the common turkey are larger than their wild relatives since they’re specifically fed and developed for their succulent meat. Their meat is customarily consumed in Europe during Christmas celebrations and in the US at Thanksgiving feasts.

Moreover, turkeys are so important in the US that Former President Benjamin Franklin once stated that they were more well-respected than bald eagles.

Several elements determine the food choice and feeding habits of turkeys. Realizing these circumstances will enable you to feed them optimally.

Some factors influencing the nutrition of turkeys include:

We’ll base the nutrition of turkeys on these relevant factors.

Generally, turkeys are omnivores. They feed on plant-based diets, such as grains, seeds, nuts, veggies, and fruits. Additionally, they eat small animals like insects and worms.

However, there’s a distinction between the nutrition of domesticated turkeys and wild turkeys. For sufficient understanding, we’ll treat the nutrition of these iridescent birds individually.

Domesticated turkeys are larger than their wild counterparts and mainly possess white feathers. Regardless, turkeys with brown or bronze feathers have also been domesticated.

Throughout the temperate regions of the world, farmers rear domesticated turkeys. This tendency partly exists because industrialized farming has made it relatively economical to raise the birds.

What Do Domestic Turkeys Eat? 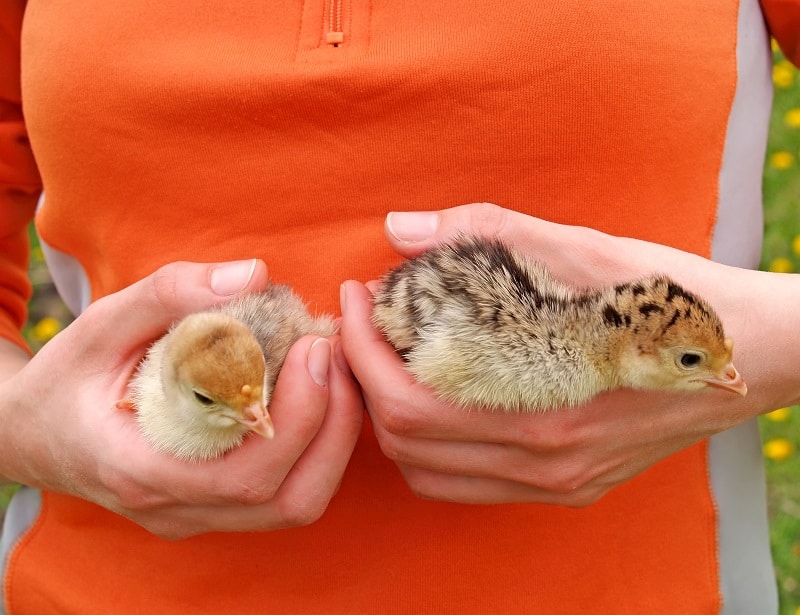 This section provides an outlook on what the young turkeys eat.

What Do Baby Turkeys Eat?

Baby turkeys are known as poults or turkey chicks. The nutrition of poults is particularly essential because it’s critical to their growth into adulthood.

Initially, a turkey hatchling derives all its nutrients by absorbing the yolk into its abdomen. The nutrition offered by the yolk can serve the poult needs for one or two days. Afterwards, the poult will require a standard turkey starter feed.

If you can’t find a specific turkey starter product, you may opt for a game bird starter feed. Both types of starter feed contain many proteins necessary for young turkeys.

Since turkeys grow to become considerably larger than chickens, baby turkeys need more protein in their diet than chicks. Surprisingly, as turkeys grow older, their protein requirements decrease. Eventually, you can feed a five-week-old turkey with a traditional chicken starter.

From 13 weeks, turkeys can begin consuming regular turkey (or game bird) feed which comprises fewer proteins than the starter feed. Thus, you can offer adult turkeys a 16–20% protein feed.

Similarly, you may place your adult domesticated turkeys on a healthy all-natural diet that may incorporate grains, seeds, nuts, veggies, legumes, or other nutritious choices. Yet, note that turkeys require more protein intake than sugar. Hence, you should only give adult turkeys sugary foods, like fruits, as a treat, not as a proper meal.

If you’re raising turkeys for your consumption or as pets, you may not be obliged to provide them with commercial feed when they’re up to 13 weeks old. Aside from branded turkey feeds, you can provide your adult turkeys with all-natural or homemade food. Additionally, you could graze your turkeys on pastures.

On the contrary, turkeys require more substantial nutritional provision commercially. Since commercial turkey-rearers desire their turkey products to have a more attractive market value, the need for profits prompts them to invest in adequate commercial turkey feed. 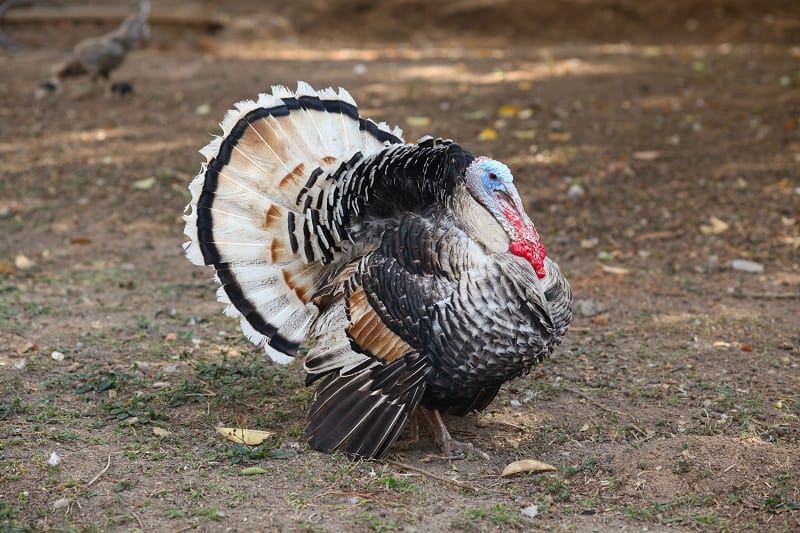 Their mode of nutrition is crucial to us because, in the process of foraging for food, they aid in seed dispersal which is, in turn, beneficial to plant growth.

Moreover, wild turkeys search for food by scattering leaves and other ground debris with their feet. They also wallow into ponds or streams and flap into bushes and residential areas in a bid to find food. Due to their tendency to search for food in bushes, they’re also referred to as bush turkeys.

What Do Bush Turkeys Eat?

Bush turkeys eat grains, nuts, veggies, fruits, and insects. In addition, they may feed on snails and small vertebrates, such as lizards and fish.

As previously stated, turkeys are omnivorous creatures — they consume both plant- and animal-based food. So, what can turkeys eat? Domesticated turkeys mainly eat specified bird feed, while wild turkeys eat grubs as they mostly toil for their food.

Here are various foods turkeys like to eat and can eat:

Various veterinarians and animal nutritionists have attempted to manufacture pre-formulated turkey feeds. Primarily, this form of turkey feed is the most nutritious option.

The right brand of specified turkey feed contains optimal amounts of the appropriate proteins, vitamins, and minerals needed for the proper development and wellbeing of the birds. Pre-formulated feed choices for turkeys of various ages and purposes are available at decent poultry feed stores. Still, some of these feeds may bear the name “game bird feed,” as the phrase is typically used interchangeably with “turkey feed.”

The short answer is yes. However, the concept is more complicated than that.

Turkeys can survive by feeding on conventional chicken feed. Yet, this feed isn’t the perfect option for them as they chiefly require more protein to grow to their maximum size.

You can provide wild turkeys and adult turkeys raised for personal consumption or as pets with a healthy, all-natural diet. Wild turkeys enjoy eating seeds, fruits, insects, small animals, and berries. On the other hand, you may provide your backyard turkeys with household food and common foodstuff.

Additionally, you may encourage your backyard turkey to forage for food by throwing some vegetable scraps or handfuls of worms into the dirt.

You can feed your turkeys with cooked or uncooked pumpkin, cooked potato or yam, and cucumbers. As omnivores, they also feed on small animals. Namely, wild turkeys eat ticks, forming one of the arthropod’s major predators.

Treats are to turkeys as desserts are to humans. Since turkeys require more proteins than sugar in their diet, sugary food like fruits, berries, and nuts may only serve as treats.

You could also provide your turkeys with nuts, such as walnuts, pine nuts, Macedonian nuts, almonds, Brazil nuts, and beechnuts.

However, when giving turkeys commercially processed nuts, endeavor to rinse salts off the nuts before your turkeys consume them.

Yes, you can offer both adult domesticated turkeys and wild turkeys bread. However, they may take time recognizing it as food. Thus, it’s your job to make them realize bread is a possible snack.

The changes in seasons primarily affect the diet of wild turkeys since they typically search for their food.

What Do Wild Turkeys Eat In the Winter?

Wild turkeys predominantly feed on nuts, grains, and fruits in winter and autumn.

Wild turkeys are typically opportunistic omnivores and may consume meat during seasons of food scarcity, such as winter. Still, wild turkeys consume a more significant amount of fresh buds, grasses, and other plant materials in the spring.

In the summertime, wild turkeys primarily eat insects and berries.

Numerous individuals consume turkeys for food, especially during Thanksgiving and Christmas celebrations. It’s thought that these birds’ meat is highly nutritious and provides some benefits to humans.

Here are some health benefits that may arise from consuming turkeys:

Since turkeys are omnivorous birds, it isn’t typically difficult to settle their nutritional needs. Yet, their nutrition requires more attention when young, as this stage determines their development into adulthood. Afterward, you may not go through much stress to provide food for them if the birds aren’t being raised for commercial purposes.

Similarly, it’s essential to understand that the effort invested into feeding turkeys will significantly influence their yields. This explains why poultry-raised turkeys are larger and contain more meat than their wild relatives. Thus, turkeys reared for meat should be provided with sufficient nutrition.