Zebras are truly majestic beasts. Their beautiful white and black coats and societal relationships make these creatures fascinating to behold. Moreover, that they can only be naturally found in selected world regions also contributes to their elegance.

Several tourists visit national parks every year to see glamorous animals like zebras. This trend has made people develop an interest in the nutritional habits of these white-and-black creatures. As such, the question “what do zebras eat?” is a common topic for discussion among lovers of these animals.

This article extensively treats zebras’ nutrition mode and nutritional habits. Additionally, we’ll provide a brief outline of the hoofed beasts to foster a better understanding of them.

A Quick Outline of Zebras: What Are Zebras?

Zebras are equines native to Africa, with a characteristic white-and-black striped coat. They’re among the only three living groups of equines, the others being horses and asses. Although they are closely related, zebras and asses are distinct from horses in that they have chestnut callosities—a projection on the body of an equine—only on their front legs.

Regardless, zebras are among the most recognizable mammals on the planet. Their distinctive black-and-white stripe coat is the reason for this disposition.

Fun fact — Do you know that zebras were historically called hippotigris (horse tigers)? Their resemblance to horses and possession of stripes like tigers were responsible for this inclination.

Another remarkable reality about zebras’ stripes is their unique patterns. Every zebra has a distinct stripe pattern, just like in tigers.

Still, there’s no universally accepted function of a zebra’s stripes. The most plausible explanation or theory is that they serve the purpose of warding off biting flies.

In terms of their evolution, zebras are suggested to have diverged from asses 2.8 million years ago and entered Africa 2.3 million years ago. Though more zebra species existed in the past, there are currently only three living species. These extant species include:

Two out of the three species of zebras are considered vulnerable or endangered. Human activities are primarily responsible for these occurrences.

Presently, many zebras live in protected habitats. And unlike their relatives (horses and donkeys), zebras have never been truly domesticated.

Regarding these truths, a study of zebras’ nutrition mode and nutritional habits may provide insight into how to cater to them in protected environments.

Habitats of Zebras: What Do Zebras Eat?

Surveying the habitats of zebras is a vital step in appreciating what they eat. These black-and-white striped equines inhabit Africa’s eastern and southern parts. Here, they occupy a wide range of habitats, including grasslands, savannahs, woodlands, shrublands, and mountainous areas.

Zebras may migrate or seek areas with higher water levels or favorable foraging conditions. Still, the extent of this tendency varies from one species to another.

Plains zebras, the most water-dependent species, live in more mesic environments and have been observed traveling 500 kilometers from Namibia to Botswana. This journey constitutes the most lengthy land migration among mammals in Africa.

On the other hand, Grévy’s zebras are more drought-tolerant and can stay without water for close to one week.

Finally, mountain zebras typically dwell in mountainous areas and can be seen at elevations of up to 6,600 feet (2,000 meters). 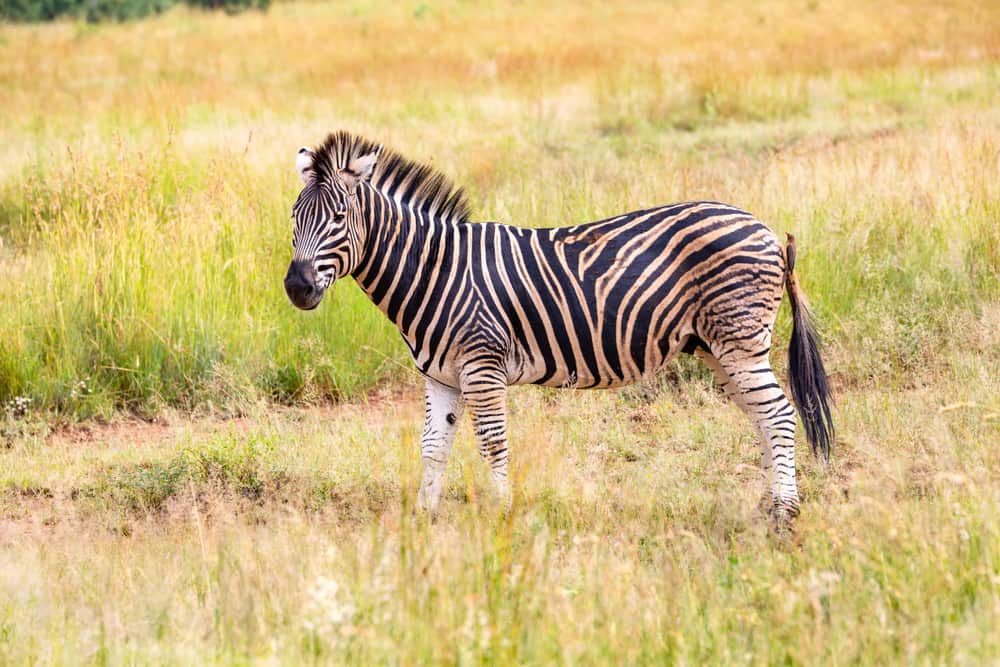 Zebras are non-ruminant herbivores. They predominantly eat sedges and grasses. However, they may alternatively feed on barks, leaves, fruits, buds, and roots, especially if their preferred foods are unavailable.

Do zebras eat meat when there are no grasses around? No, zebra’s don’t eat meat as they lack adequate dentition.

Though it’s understood that zebras eat grass, we’d be dealing with the nutrition of the extant zebra species separately.

The Grévy’s zebra is a tall endangered species with large and narrow ears. It’s named after the past French President, Jules Grévy. This zebra species lives singly or in loose herds in Kenya and Ethiopia in terms of its distribution.

More particularly, Grévy’s zebras dwell in Acacia-Commiphora bushlands and barren plains. They chiefly depend on grasses and legumes for nutrition. Alternatively, they frequently browse when grasses are not abundant.

These unique herbivores possess a hindgut fermentation digestive system that enables them to survive on diets of lower nutritional value than that generally vital for ruminant herbivores. Additionally, as previously stated, Grevy’s zebras can go without water for up to a week. Yet, they will drink water daily when it’s in a generous quantity.

What types of grass do zebras eat? Principally, zebras prefer long, rough grasses that are highly fibrous but relatively low in protein and other nutrients. Plains zebras are fond of consuming Bermuda and red oat grass.

How much do zebras eat a day? Since zebras are more active during the day, they consume a significant amount of food. Zebras may spend up to 19 hours eating per day. Notably, consuming dry grass prompts them to eat more than they typically consume when feeding on fresh grass.

Mountain zebras are a small, vulnerable zebra species native to south-western Angola, Namibia, and South Africa. They primarily dwell in mountainous regions and occupy open grasslands and woodlands. Like plains zebras, they live in herds.

What do mountain zebras eat in the wild? In the wild, mountain zebras usually choose tufted grasses. Some grasses suitable for this species include red oat grass, bottlebrush grass, black speargrass, and turpentine grass.

Similarly, mountain zebras drink water daily. They frequently use their hooves to dig for water when surface water is unavailable.

Like other mammals, female zebras, known as mares, breastfeed their foals (baby zebras) with milk. This nutrition mode occurs during the first year of a zebra’s life.

Adaptations and Habits That Facilitate the Nutritional Mode of Zebras

Zebras show certain eating habits and characteristics that enhance their mode of feeding. Some of these adaptive elements include:

African lions, which are among the most significant big cats, typically prey on zebras. A single lion can bring down a young or unwatching zebra.

Cheetahs are the fastest land mammals. They’re carnivores that may hunt zebras either individually or in packs.

Leopards may occasionally prey on zebras in the plains of Africa.

Spotted hyenas are intimidating predators that typically hunt hyenas and feed on their meat.

African wild dogs tend to hunt down prey in large packs. Zebras are among the game they takedown.

Nile crocodiles take advantage of zebras when they bend their heads low to drink water from rivers. These reptilian carnivores may injure, kill, and eat the white-and-black striped equines in the process.

Nutritional Relevance of Zebras to Humans

This section deals with how humans and zebras interact with each other nutritionally. For a significant period, human activities have affected the nutrition of zebras.

Some of these nutritional interactions include:

Humans’ transformation of woodlands and grasslands to arable land has forced zebras away from their natural habitats, depriving them of their food source.

The wind of civilization and the desire to expand human territories have prompted humans to penetrate activities that are unfavorable to zebras. Bush burning, deforestation, clearing of plains for the construction of roads and houses, and carbon emission are ways that human civilization has negatively impacted zebras. These activities have somewhat driven them from their natural territories, where food was once plentiful.

Several human groups, including guerilla fighters, have been involved in the hunting down and subsequently killing zebras for their meat. This atrocious action has pushed some zebra species to become endangered and vulnerable.

What plants do zebras eat in the zoo? Zebras in the zoo consume grasses, shrubs, twigs, flowers, and fruits. In captivity, zebras may eat berries and other fruits for a treat.

Zebras are beautiful black-and-white striped equines that exhibit unusual herbivorous nutrition known as the hindgut fermentation digestive system. This digestion mode allows them to survive by feeding on grasses of low nutritional quantity.

Furthermore, the effects of human activities on zebra’s nutrition are tremendous. Human activities that adversely affect zebras—such as poaching and deforestation—should be discouraged. On the contrary, schemes that help conserve zebras and their habitats should be promoted.