There are a whole host of intriguing beliefs when it comes to a bird pooping on you. Most consider it a symbol of good luck, while others take it as bad luck. Often people consider it a portent of wealth or a blessing upon you. Some cultures of the world believe a different message is being sent depending on the type of bird that graces you with its poop.

Of course, many believe that a bird pooping on your head is pure coincidence, since birds often poop soon after they take flight to lighten the load. Some birds even use poop as a defense tactic, to deter predators from their nest and chicks.

Whether it’s a blessing or a coincidence, one thing everyone agrees on is that you should clean it off as soon as possible! Make sure you wash your skin, hair and clothes thoroughly!

Today, we’ll explore the different beliefs associated with a bird pooping on a person, as well as some of the actual ecological reasons behind this phenomenon. So, what does it mean when a bird poops on you?

Why Do Birds Poop On People?

Birds Poop Frequently And Before Flying

When a bird poops on a person, it is most likely a coincidence since there are a lot of birds flying over us or perching in trees above us all the time.

Birds also defecate often and throughout the day. They have an incredibly efficient digestive system which processes food quickly. They also evacuate both liquids and solid waste at the same time: uric acid (the bird equivalent or urine) and poop. So, technically, when a bird poops on you it is effectively peeing and pooping on you at the same time…sorry if you didn’t want to know that!

The frequency a bird poops depends on both its size and diet, with smaller species pooping more frequently than larger species. Small birds like budgies may poop between 40-50 times a day (that’s around one poop every 12-15 minutes!). Larger birds like ostriches may defecate around every 3 hours. This could be to do with the size and length of the digestive tract which is longer in larger birds and shorter in smaller birds. Let’s hope you never experience an ostrich pooping on your head!

All birds need to be light in order to fly efficiently, so they will often poop before flying or on lauching in order to lighten their load. If you happen to be near trees, bushes, or cliffs when you get pooped on, a recently launched bird may be responsible.

Poop As A Defense Mechanism

Some birds will intentionally defecate as a means of warding off predators. This is a defense mechanism to scare the predator away and stop them from preying upon their eggs and chicks.

Corvids, such as crows, are some of the biggest (and most accurate!) culprits when it comes to using poop as a defense technique. Gulls will also mob both ground predators and sky predators such as hawks, feinting and attempting to spray the attacker with poop.

Eider ducks produce feces which is strong and foul-smelling particularly during nesting season to repel predators away from their nests.

Eurasian hoopoes (above) have a similar technique – a mother sitting on the nest will secrete a malodorous substance over their feathers and the chicks to protect themselves from bacteria. This secretion comes from the uropygial gland. The chicks may also suddenly spray poop to deter potential predators. Smart and disgusting!

Scandinavian fieldfares delpoy feces to guard their nests, particularly from airborne predators like ravens. These birds will mob the attacker, attempting to drench them in poop to chase them away and most likely put them off their meal! In some cases, the attacking birds’ wings may become so drenched that it hampers their flying ability. This can be fatal for them, causing them to land and become vulnerable to predators themselves.

What Does It Mean When A Bird Poops On You? Symbolism 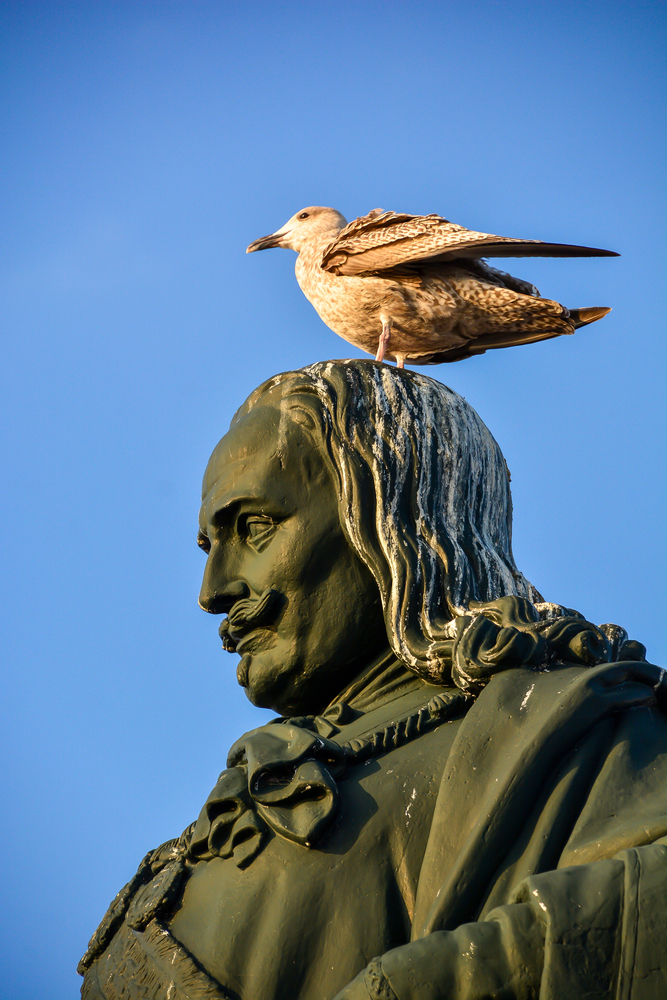 Throughout history, people have been fascinated by birds and often attached spiritual meaning to them. Many cultures regard them as messengers from higher realms. Often birds represent freedom and independence.

It is generally well agreed upon that a bird pooping on you is a sign of good luck. It may be a signal that some kind of wealth is coming your way, or even a blessing (in a strange form!). However, in some regions of the world it is seen as a sign of bad luck, probably because it is pretty revolting and difficult to clean up!

From a spiritual perspective, many cultures believe that when bird poop lands on you it is a good omen; it instils good luck in the receiver. Some believe it is a sign that the gods are favoring you, a blessing from a higher realm.

While the exact origins of this belief are unknown, most people agree it began in Russia. This is also widespread through Europe, and particularly in Turkey. It is possible it was generated as a way to turn a nasty event into a positive feeling. It is well known that thinking positively can have a strong positive effect on your life – changing your mentality following the bestowing of luck upon you (in the form of bird poop) may indeed bring you luck.

Good luck is particularly associated with a bird pooping directly on your head! Some people believe that if a bird poops on anything you own it is a sign of good luck, whether its your car or your favorite jacket.

Some superstitions regard being pooped on by a white bird like a dove a blessing. This is because pure white birds often represent purity and peace.

Some believe that if you get defecated on by a bird during the night, this is a sign of terrible bad luck. Night birds like owls are rarely seen, partially because they are difficult to see when it is dark. If one happens to fly over you and poop on you, bad luck may befall you. Don’t worry though, this is incredibly rare!

In some traditions people believe that corvids (birds like crows and ravens) are harbingers of doom. Thus, if one of these birds poops on you it may indicate bad luck.

Similarly, the droppings of rooks (another corvid species) are believed to be a punishment rather than a blessing. This is a superstition in Great Britain.

In Russia, it is traditionally believed that a bird defecating on you will bring you wealth and good fortune. There is a similar belief in Italy, but it is more a sign of good fortune from God.

If a bird poops on you around noon, there is a superstition this is an indication of great wealth coming to you soon. Wealth can mean lots of things, not necessarily monetary wealth. It could mean a wealth of happiness, friends, or good health.

The feces of animals is associated with the digestion of food, and therefore people came to associate it with abundance and vitality.

There is a superstition that if you get defecated on by a bird in the morning, it is a sign of upcoming positive changes in your life.

Wash It Off And Let The Luck Play Out!

In summary, whether bird poop brings you good luck or not, you should always immediately wash it off! Bird droppings can contain bacteria and parasites which may be harmful to humans. Using stain remover is also advisable for your clothing, as bird poop can contain strong pigments from items like berries which will leave a nasty stain!

Many associate being pooped on by a bird with good luck, others believe it symbolises bad luck, while others still think of it merely as an annoying coincidence.

What Does It Mean When You See an Owl? - Coachella Valley Preserve