Hawks are predatory birds on top of the food chain in most ecosystems they inhabit, which means they feed on a wide variety of prey, but very few animals prey on them.

Despite their strong beaks, sharp claws, and excellent hunting abilities, there are moments in a hawk’s life when it’s weak and vulnerable, and that’s when it becomes the prey.

Sadly, the weakest and most vulnerable moments occur even before the hawk hatches while still in the egg, and things do not get any better after hatching.

If left unprotected, eggs and young hawks are equally in jeopardy: the eggs and hatchlings are in danger because of climbing or flying predators.

The young hawks risk falling prey to predators when they go too far away from their parents’ sight during flight lessons.

As it grows older, more powerful, and wiser, the hawk has fewer and fewer predators. However, a hawk is not invincible and can injure itself like any other animal in the wild.

Therefore, a wounded hawk that cannot fly or defend itself is easy prey for other predators; obviously, a dead hawk will also become food for scavengers.

Let’s find out who the climbing and flying predators are, and what other enemies hawks have. But first, to understand why hawk is such difficult prey, let’s find out a bit about hawk biology.

A Short Introduction To Hawks

Hawks are a vast family of prey birds (Accipitridae), with over two hundred species spread worldwide except Antarctica. They are mainly found in woodlands (although they can adapt to many environments).

These birds are excellent diurnal hunters due to their sharp vision (four types of color receptors in the eyes and up to one million photoreceptors in the retina) and high intelligence according to a Canadian avian IQ scale.

Numerous nerves connect those receptors to the hawk’s brain. A serrated small central pit in the retina, called the fovea, helps the bird magnify the central portion of the visual field – this is called cortical magnification.

Their sense of smell is weak, yet their hearing is sharp. But the hawk’s “super-power” is actually its speed, some species reaching up to two hundred and forty kilometers per hour during air diving.

Except for the migratory species, the hawk is a solitary bird. It usually mates with one partner in the breeding season, outside of this time it survives alone.

Hawks vary remarkably in color and size, among species and even among individuals. The female is, in general, larger than the male.

The biggest hawk species is the Northern Goshawk (Accipiter gentilis), reaching up to sixty-nine centimeters in length, two-point two kilograms weight, and up to a hundred and twenty-seven centimeters wingspan.

What do you think? Could a Northern Goshawk hunt and eat a Little Sparrowhawk? 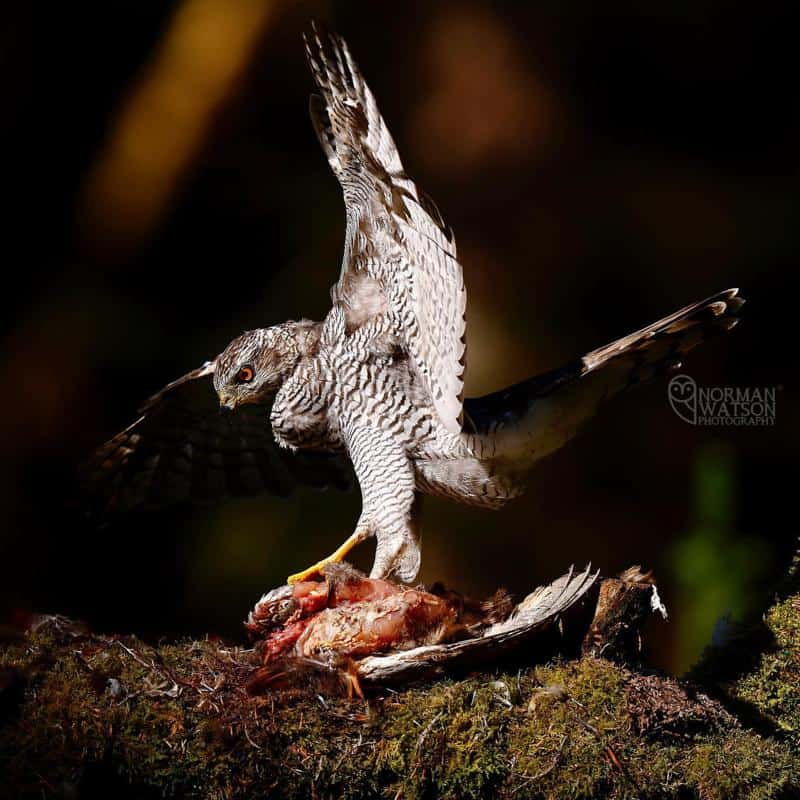 A Gabar Goshawk for example could and undoubtedly will attack and eat the tiny Little Sparrowhawk, especially if the victim has the “luck” to pass by mistake through the bigger hawk’s territory.

In general, the Gabar Goshawk is the main natural predator of the adult Little Sparrowhawk.

Larger species of hawks will prey upon and feed with smaller hawks, regardless of their family connections.

Larger hawk species tend to establish dominance in the habitat where multiple hawk species inhabit the same area. Their skills, experience, size, and strength leave no chances of survival to a smaller hawk species. Luckily, if it’s not a territorial matter, the big hawks are likely to attack small ones only in cases of short food supplies, because small hawks are difficult to catch. 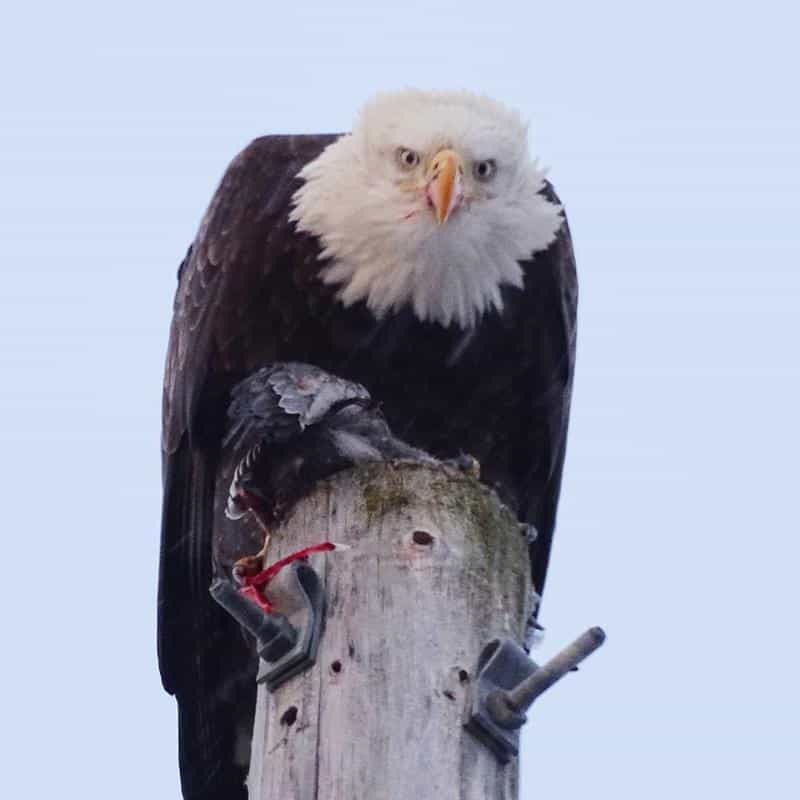 Eagles are large birds of prey belonging to the same Accipitridae family as hawks, with about sixty species in Eurasia and Africa, nine in Central and South America, three in Australia, and two in North America.

Since hawks are found everywhere, there is a high chance that these two birds will meet and compete over territories and nesting sites or challenge each other in the pursuit of food.

The enormous eagles are also more vicious in their war against the hawks, often attacking hawks’ nests, preying on hawklings that can’t fly very well yet, and sometimes even smaller hawk species.

The adult fighting birds won’t kill and eat each other per se. Repetitive attacks on the hawk’s nest and its attempts to defend it can eventually lead to the injury of the adult hawk also, making it vulnerable to other predators’ attacks. 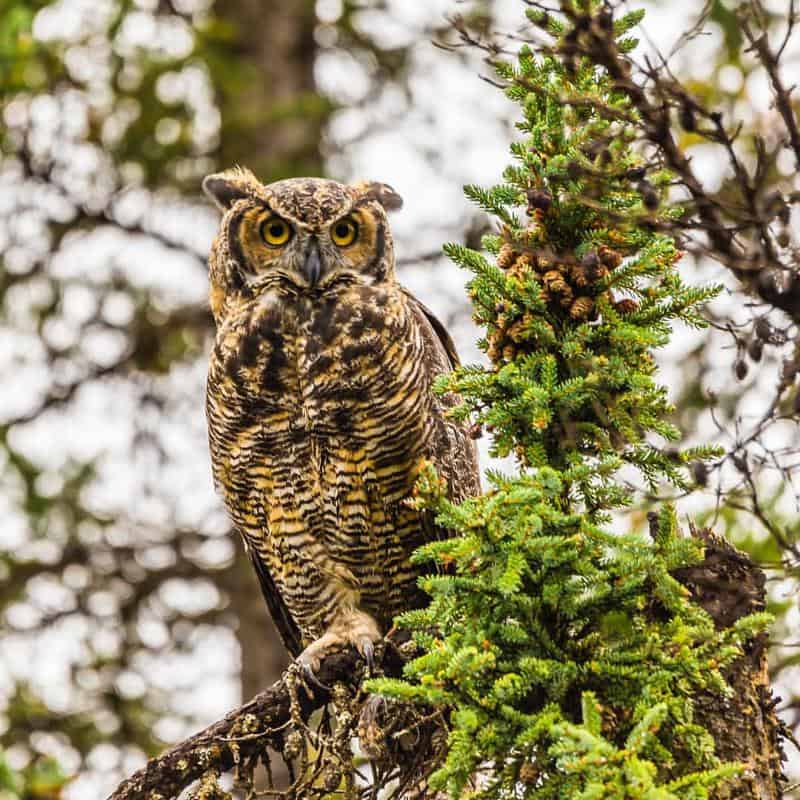 Owls also compete with hawks for nesting sites and territory, and they are just as vicious as the eagles in their fight: they destroy the hawk’s nests, and prey on their young.

The owl is even more dangerous for the hawk if it challenges it during the night, when the owl’s vision is at its best, while the hawk has vision adapted for the daytime.

Hawks are aware of this deficiency, and that’s why they choose to remain inactive and hidden at night.

Although the bold owl won’t hesitate to attack a neglectful adult hawk, they usually target its eggs, hatchlings, or young hawks.

Also Read: Why Do Owls Hoot During The Day (5 Reasons) 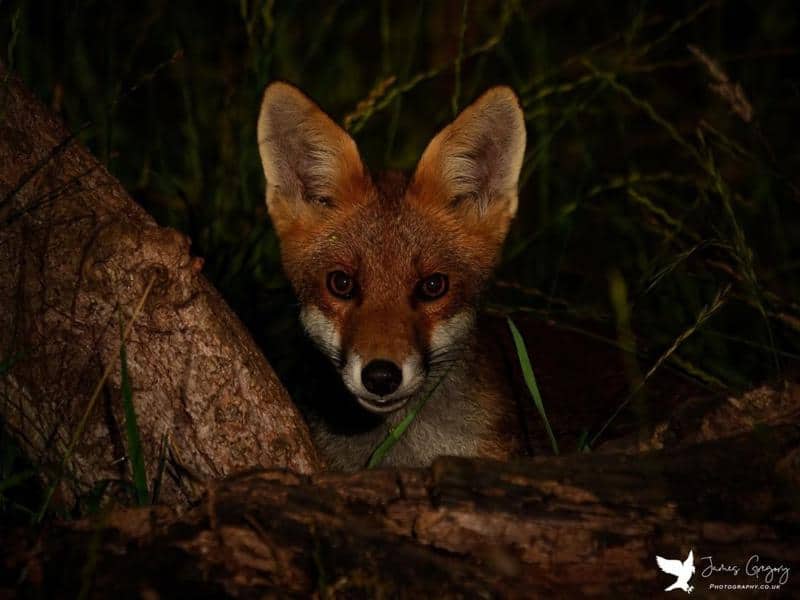 Like hawks, foxes can live pretty much everywhere, so it’s very likely for the two to meet and the fox to target the hawk’s nest if it is able to reach it.

The fox is a sly predator, lurking and waiting for a chance to attack, even if that might take many long hours.

Although the fox usually goes for hawk’s eggs and hatchlings, sometimes it feels confident enough to try its luck even with immature hawks that neither fly well enough to escape nor are prepared for an attack.

A fox’s strategy is a trial of wounding the young hawk, making it bleed and unable to fly, thus unable to protect itself. 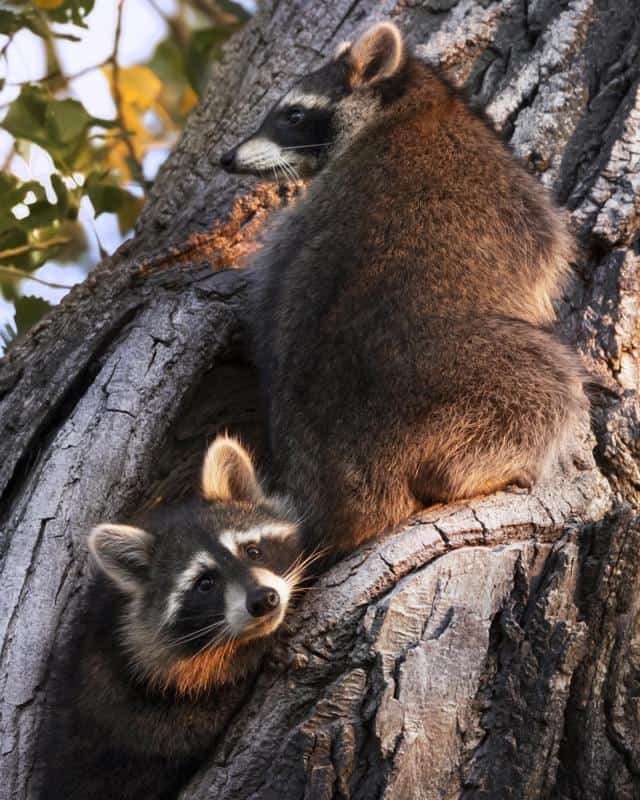 Being excellent climbers, always hungry, and in a continuous search for food, raccoons will attack unprotected hawk’s nests.

Just like the fox, the raccoon targets the eggs and hatchlings and hunts for an opportune moment when the adult birds are not around.

Although there are situations when the mother hawk must leave the nest, the raccoon’s plan may not work very well because there is often a protective father hawk nearby.

Of course, since the raccoon is also on the hawk’s menu, this mammal won’t regularly prey upon hawk nests. If a raccoon stumbles on a freshly dead hawk it won’t hesitate to eat it.

Also Read: What Do Raccoons Eat? Do They Feed on Plants or Animals? 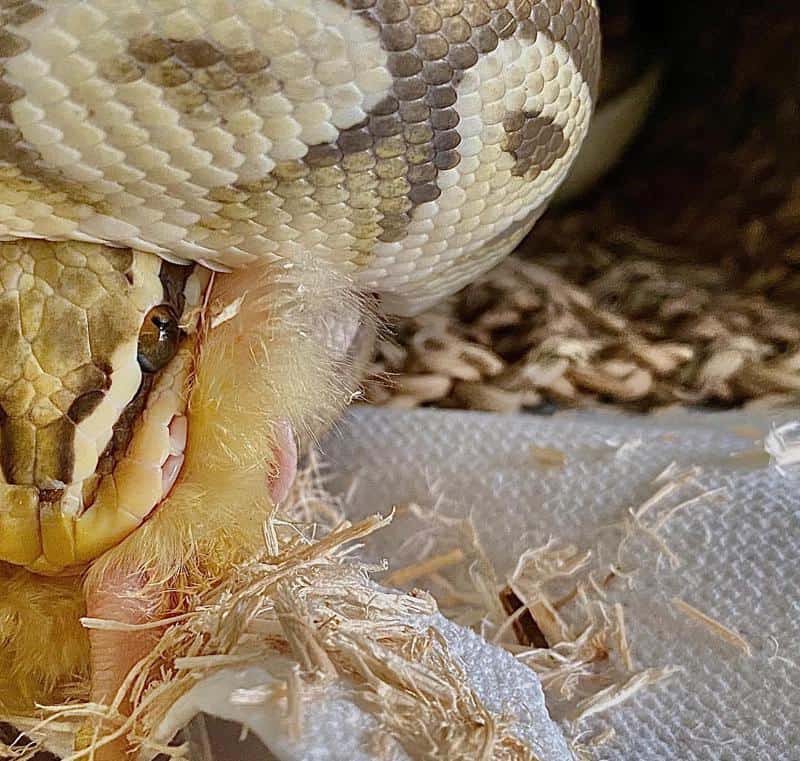 Yes, things are usually the other way around as snakes are naturally on the hawk’s menu.

However, there are records of snakes fighting back, attacking hawks and nearly winning. But adults hawks are not on the snakes’ menu.

Like most other hawk predators, snakes will take advantage of an unsupervised nest, eating the eggs or preying upon hatchlings.

Unlike other hawk’s predators, snakes are very agile hunters, silent, and difficult to observe. On top of that, their climbing abilities make the hawk’s high nests a potential target.

Due to its silent presence, the snake can get very close to the nest and surprise the young hawklings or even catch an adult hawk with a venomous bite.[2] 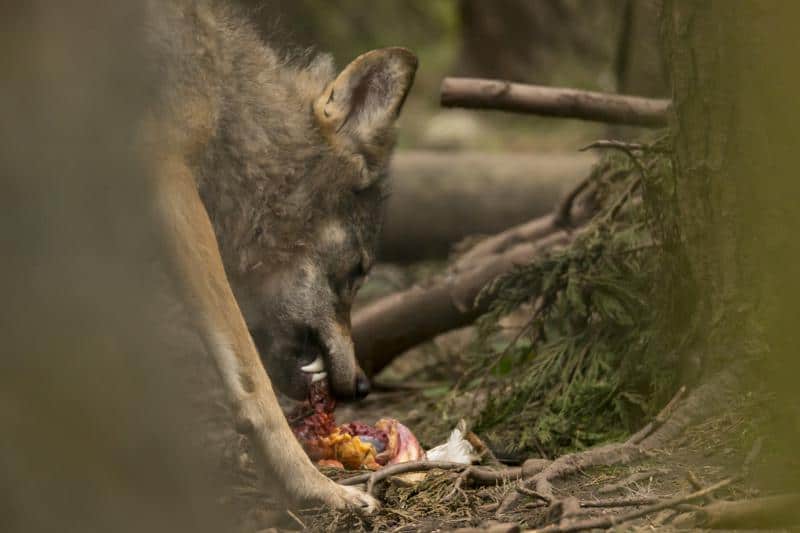 It is rare and unusual for a hawk to meet a wolf, considering one is an flying bird, and the other is a terrestrial mammal.

Moreover, wolves usually hunt in packs of about four to six so a hawk wouldn’t make much of a feast for them.

But the wolf is also an opportunistic feeder, and if it stumbles upon a wounded, dead, or a juvenile hawk, it will gladly eat it.

So wolves do eat hawks on rare occasions but do not actively hunt them, as the wolves’ diet usually consists of medium and large mammals – enough to feed the whole pack.

Hunting or even capturing hawks is illegal in many places worldwide This is mainly due to their often endangered or vulnerable status, their helpful feeding habits (sometimes preying upon “pest” species like rats and rabbits) and the fact that they do not represent any danger for humans.

Although most societies reject the idea of raptor birds consumption, some tribes in Alaska and some local communities in the midwest and southwest of North America capture and eat hawks.

The consumption of raptor meat is not recommended due to the risk of one exposure to toxins and poisons the bird might have ingested from its prey (snakes, rodents, frogs, etc.).

Of course, in the rare case when one finds themselves in the wilderness with no other food sources, it is safe to eat a raptor bird as long as you make sure that it is not a scavenger species, although it does not taste delicious.[3]

What Other Animals Eat Hawks?

Keep in mind that the hawk is a bird of prey, almost always at the top of the food chain, and it has very few enemies.

Most of the animals that would dare to feed on hawks are scavengers, mainly because a dead hawk is the easiest type of hawk to catch. Otherwise these predators only target hawk eggs or hatchlings, and on some occasions immature hawks.

Therefore, any scavenger animal or opportunistic carnivore could and will eat an injured, young or a dead hawk; these species could include bears, coyotes, crows, vultures, hyenas, etc.

Although it is a predatory bird often at the top of the food chain, the hawk still has some predators.

Some natural enemies are found among its kin, bigger species of hawks remaining a threat even when smaller hawk species reach adulthood.

Otherwise, the most vulnerable period in a hawk’s life is the egg period and the first three months of life until they master flying.

After the first three months, the chances for a hawk to become the prey diminish as the hawk grows stronger, smarter, and wiser.

The various predators that would attack a hawk’s nest could also represent a hazard for the adult birds. Fights against larger raptors, venom from snakes, or catching other animals preying their nests (like foxes, for example) could harm a hawk and make it vulnerable to other predator attacks.

Most human socieities reject  the consumption of hawk meat and forbid hunting and captivity by law. Nonetheless, some isolated communities have no problem eating this majestic bird.