It’s fascinating to watch turtles in ponds, lakes, and marine environments. In some places they’re so common that for local people they’re like pigeons in cities! You may have seen people feeding turtles, or found a turtle close to you and wanted to feed it.

But should you feed wild turtles? The answer is yes, you can feed them, but you need to make sure you feed them the right foods and avoid certain other foods like bread. A turtle’s diet differs depedning on the species, age of the turtle, and ecosystem it is found in. So before feeding them make sure you know who you’re feeding and what they need for a healthy, nutritious supplement!

Today, we’ll answer some common questions surrounding feeding wild turtles including whether you should feed them, how to feed them, what to feed several common species, and importantly what not to fed them. Please note that you should not touch wild turtles because they may carry Salmonella bacteria! Wild animals should be treated with respect and care and causing them harm should be avoided at all costs.

You can feed wild turtles, but you should find out the species and age of the turtle before feeding to make sure you offer the right foods.

Do not touch wild turtles! Leave them where they are and feed at a distance. Adult turtles require more plant matter in their diet while baby turtles need more protein.

Turtles are mostly omnivores. Typical foods you can feed them include:

Foods which should be avoided include:

Should You Feed Wild Turtles? 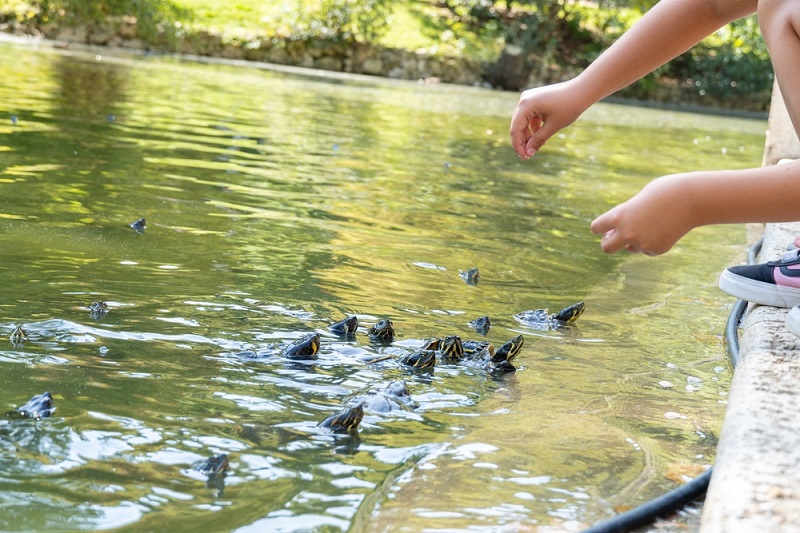 When it comes to feeding wild turtles it can seem fun and straightforward – it is as long as you do your research properly! Make sure you know what species of turtle you are trying to feed, so you can offer them the right kind of food that fits their dietary requirements. The age of the turtle is also important as young turtles require different nutrition compared to older turtles.

Feeding them the wrong food can do them a lot of harm, causing serious diseases and problems like shell deformation and metabolic bone disease.

It may be that feeding a wild turtle you come across can help it greatly, especially if the area it is living in lacks natural food for it to forage. However, these are wild creatures which are fully capable of foraging for themselves. A struggling turtle may simply be old, sick or injured, and while supplementing their diet may give them a real boost, it may also make no difference.

How To Feed Wild Turtles

Do not touch wild turtles! They can carry Salmonella bacteria which can make humans very sick. Ensure you feed them from a distance, leaving the food out on the ground or in the water (depending on the type of turtle) for them to discover themselves rather than feeding them by hand. Keeping your distance is also advised for snapping turtles which can inflict a painful bite.

Cut any food you offer into small, bite-sized pieces that turtles can easily take into their mouths and swallow down. Remove tough skin, peel and stalks.

As with people, turtles should be fed in moderation and with balanced foods – too much of one food is bad for everyone! Try to offer different foods or offer them alternately on different days.

Also, to protect the turtles from any bacteria you may be carrying, it is advised to wash your hands properly before laying down food for them.

It should go without saying, but do not share food with turtles! Don’t try to eat their leftovers and don’t give them your leftovers. This is for safety and to avoid contamination.

What To Feed Wild Turtles

Turtles are omnivores – they eat both plant and animal matter. In general, they are opportunists, making the most of the food they can find. In other words turtles are not fussy eaters! This does not mean you can feed them anything however.

Their requirements depend on the species and age of the individuals. Here, we’ll take a closer look at some of the common turtle species you might find and want to feed. But first, let’s look at the dietary requirements of a baby turtle…

As with many young animals, baby turtles need a bigger quantity of protein in their deits than adults. This usually means they will consume a greater amount of animal matter, in other words they are more carnivorous than adult turtles.

What you can offer to a baby turtle still depends on the species, but most baby turtles can be offered small earthworms and mealworms, and other small insects like crickets and grasshoppers.

If you struggle to get hold of insects, baby turtles can be fed a small amount of vegetabl matter. Some safe food items include carrots, squash, romaine lettuce and collard greens. They can also eat fruits like melons, berries, apples and bananas.

Ensure you remove tough peels and stalks, and cut the fruits and vegetables into small pieces, small enough for turtles to easily chew on and swallow.

Box turtles (also called Box tortoises) are land turtles. They live in North America and are one of the few land turtles found here – most species are water turtles.

Foods which are safe for box turtles include:

More information found in this video!

Turtles which naturally inhabit freshwater habitats consume a different diet and so need to be fed differently compared to land turtles. However, they are also omnivorous. Common water turtle species include snapping turtles, painted turtles, and red-ear slider turtles.

Because water turtles reside in, yes, the water, food should be offered to them in the water. This is where they are used to eating food and may not approach food left on land. Alternatively they may drag any food on land into the water to consume it anyway.

Foods which are safe to offer to water turtles include:

It is very unlikely you will be in a situation where feeding sea turtles is an option. They generally have highly specialised diets so cannot be easily fed by humans. Some species are carnivorous, some omnivorous, and others herbivorous. However, let’s have a little look at their typical diets.

As you can see, it is not easy to feed sea turtles with foods easily obtainable by people. It is best to seek expert advice if you find a sea turtle that you think needs helps. Call a local wildlife rescue service or helpline for information and advice.

See here for a review of sea turtle diets in an aquarium.

What NOT To Feed Wild Turtles

Number one on the list of foods not to feed turtles is bread. Do not feed turtles bread! It can be tempting, and you may see other people do this, but bread is bad for turtles digestive systems. It lacks essential nutrients they need and is high in sugar and flour which these animals cannot digest properly. Furthermore, turtles can become reliant on bread offered by people – a quick and easy meal. This is dangerous and can lead to shell deformation in the long term.

As a general rule, all foods which are high in sugar and flour, and highly-processed human foods should be avoided. Oily foods are also bad. This includes candy, chocolate, fries, donuts, onion rings, and other similar foods.

Dairy products are also a big no. Turtles’ systems are not adapted to these foods because they lack the enzymes required to digest lactose. This causes all kinds of health problems for turtles.

While turtles can be fed most leafy green foods, vegetables high in oxalic acid should not be fed to them. This includes spinach, chard, beetroots, and rhubarb. Oxalic acid is dangerous because it stops turtles from absorbing calcium efficiently. Calcium is incredibly important for turtles, as it is for all reptiles, leading to diseases like metabolic bone disease.

Do not feed turtles raw meat, it can carry harmful bacteria for them. Similarly, seasoned meat is bad for turtles.

Avoid feeding fireflies (lightning bugs) to turtles, as they can be toxic. The leaves of some vegetables are also poisonous for many animals including turtles. Some of these are tomatoes, potatoes, and rhubarb.