Lizards are a wide-ranging, diverse group of reptiles, present on all continents except Antarctica. The largest lizard species are Monitor lizards which grow up to 3 metres long! And the smallest, geckos, can be as tiny as 2 cm.

A quick answer to this question is yes: there are, in fact, many animals which would eat a lizard! Some groups of birds, snakes and alligators, carnivorous mammals, fish, cats, and even other lizards will gladly eat a lizard meal. The type of predator depends on the size of the lizard prey and the location.

Here, we’ll explore the main groups of animals which will eat a lizard in the wild, including their methods and reasons for doing so. Join us to explore a fascinating subject…

A pretty long list! Lizards are fairly close to the bottom of the food chain in the environments they inhabit (with the exception of very large and carnivorous lizards like Komodo dragons and Monitor lizards). This makes them an accessible option for many predators, as long as they can keep up with the speed and agility of most lizard species! Otherwise they must catch the lizard unawares.

Before taking a closer look at these groups of common lizard predators, it will be worth discovering the defense mechanisms lizards employ to avoid predation.

How Do Lizards Defend Themselves From Predators?

Aside from the tough scales lizards possess, primarily composed of keratin, many species possess a host of incredible methods to defend themselves from predators. Some of these include:

There are very many birds which will regularly take lizards as prey – they are one of the most common lizard predators in every region of the world. Birds have an aerial advantage over lizards and can spot them from long distances. Lizards need to bask in open spaces in order to heat their cold blood in direct sunlight, making them ectotherms. The excellent eyesight birds possess enables them to detect the tiniest hint of movement, making any kind of camouflage a lizard may have useless.

Birds of prey such as eagles, hawks and raptors are very successful lizard predators. Some employ the technique whereby they hover above a lizard, waiting for the key moment to strike and carry the unsuspecting lizard away. In North America, the Red-tailed hawk is a common predator of small- to medium-sized lizards. Owls will predate lizards but most species are nocturnal (active at night) so will not regularly encounter diurnal (active in the day) lizards.

Opportunistic birds like roadrunners, corvids, and Blue jays are also dangerous for smaller lizards. Although they tend to prefer easier meals of carrion, seeds and fruits, they have the stealth the snatch a lizard snack. Tiny birds like Sparrows will also hunt for the smaller species of lizards like geckos. Larger, water birds like the Great egret will regularly hunt for lizards along the shoreline too (see below). 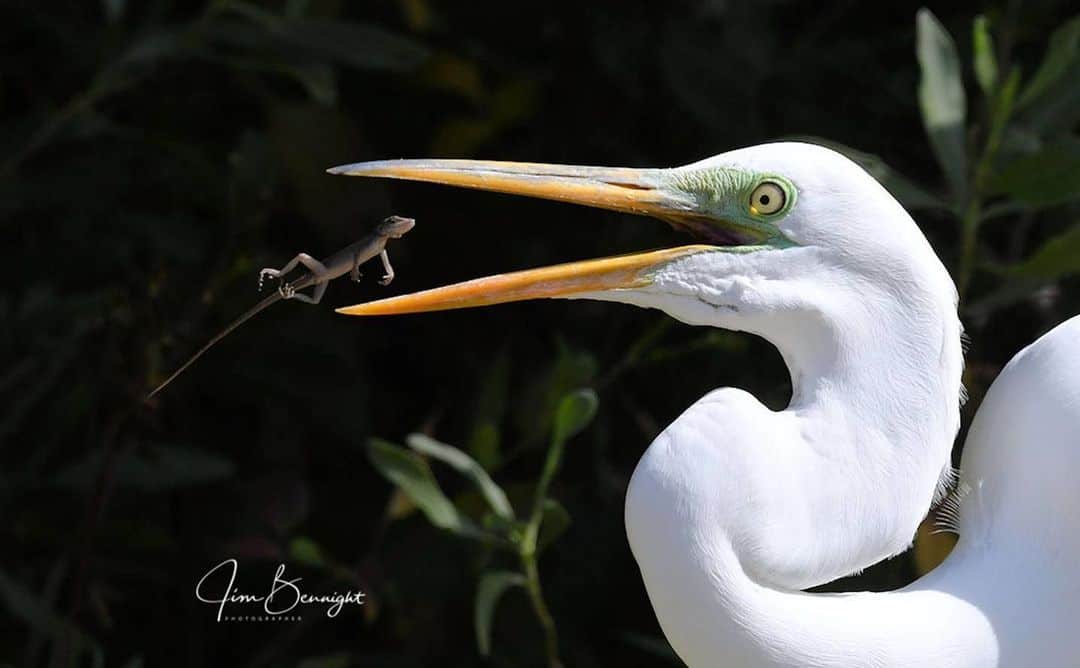 Domestic birds like chickens are voracious omnivores. If the opportunity presented itself, chickens would definitely hunt and eat smaller lizards.

Do Other Reptiles Eat Lizards?

Snakes, especially larger species, are common predators of lizards. They can overpower and consume lizards using constriction or through injecting venom through their dangerous bites. Where a lizard is much larger than a snake, it can work the other way around with lizards predating snakes instead. The diet of Elapid snakes consists almost entirely of lizards. In the image below, an Oriental tree snake is swallowing down a gecko. 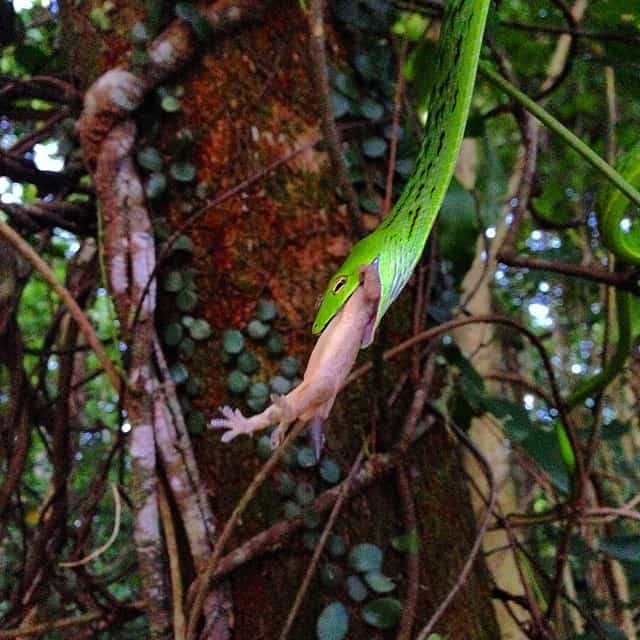 Both alligators and crocodiles are fierce carnivores, placing lizards firmly on their menus. Alligators in some areas specialise in eating water monitors, while crocodiles in some parts of North America face the challenge of monitor lizards. These crafty lizards often target crocodile eggs and will attempt to dart in and out of a crocodile egg burrow to retrieve these nutritious prizes. While a crocodile would attempt to catch and eat a monitor lizard, it is rare they would get the chance as these lizards are masters of speed.

Yes! Carnivorous lizards will eat other lizards which are smaller than them. Some species can even show cannibalistic behaviour, for example, massive Komodo dragon adults may turn on and eat young individuals. To avoid this, the youngsters will hide up trees to avoid predation from adults which are mostly ground-based once they reach maturity.

Within the large and diverse group of canids, there are many species which would eat lizards if they deemed the effort worth the meal. Wolves, dingoes, wild dogs, coyotes, jackals, and foxes are all known to eat lizards. Coyotes in particular can pose a significant threat to lizards species in some areas of North America. Domestic dogs have been known to catch lizards and chew them down, although this a fairly rare occurrence. However, many canids are nocturnal and will not routinely encounter lizards during the daytime.

Which Other Carnivorous Mammals Eat Lizards?

Mongoose are well known for being fierce predators, often taking down larger animals than themselves and challenging potentially dangerous animals like snakes. Their pluck when it comes to hunting for live prey makes lizards one of the easier meals they might target. Similarly, weasels are aggressive predators for their relatively small size and will kill and eat smaller lizards they encounter.

Opportunistic omnivores like possums, rats, and raccoons are adapted for a broad-ranging diet. They will scavenge almost any source of food they can find including a lizard which happens to pass by.

Perhaps surprisingly, there are some bat species which have adapted to eating lizards. Most bats specialise in eating insects or fruit, but there are some carnivorous species which will hunt for and chomp down lizards if they find them in the area. Usually bats will pluck them from trees rather than swooping to the ground which may make a bat vulnerable to ground predators.

Domestic cats will sometimes catch and eat lizards, as will their wild counterparts. Larger, wild cats like lynx and leopards are also lizard predators. Their speed and agility make them more than a match for quick lizards.

Amazingly, there are some species of spider which will prey upon lizards. Commonly, smaller lizards species will be attacked by larger spider species. But perhaps most interestingly the Regal jumping spider can successfully attack and eat lizards up to three times their size! They will bite and inject venom with their fangs, and hold a struggling lizard with spine-like structures on their front legs. An incredible example of a super specialised lizard-eating adaptation! 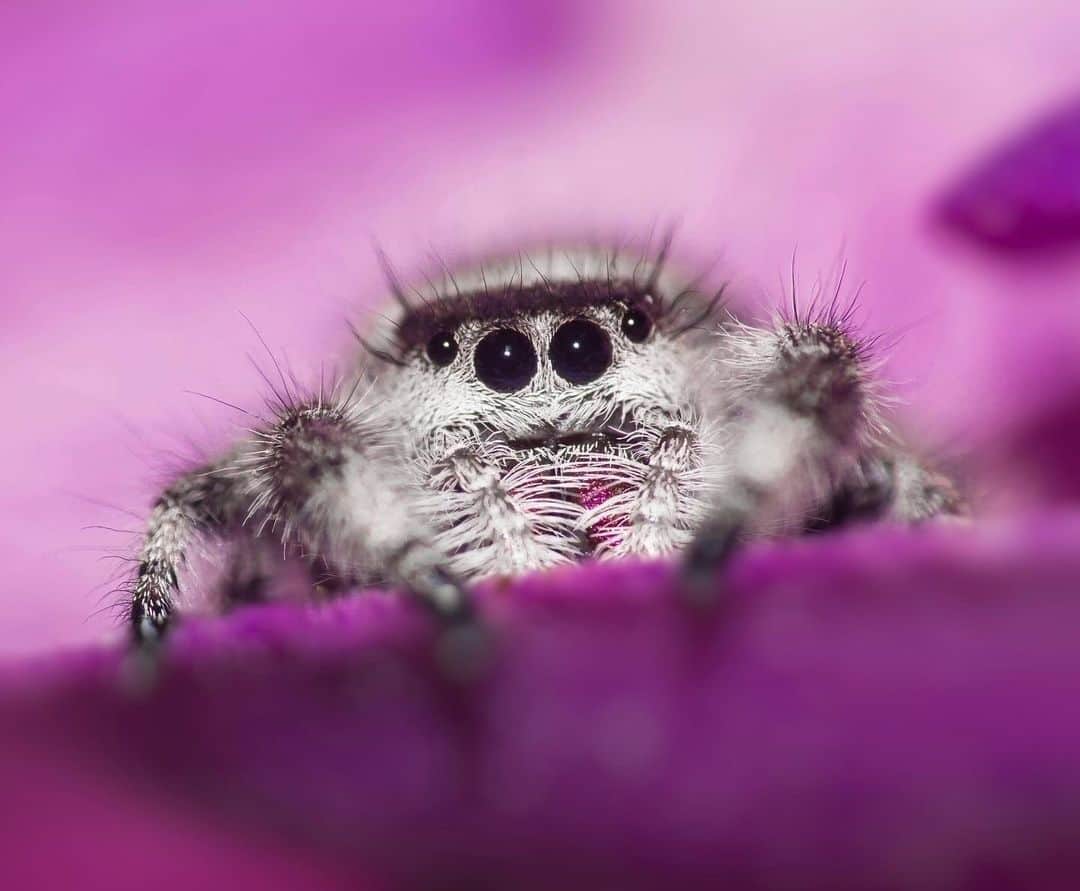 Although eating lizards is not super common when it comes to meat eating around the world, there are many regions and cultures that will eat lizards. Mostly lizards are not poisonous for human consumption, although hygiene and appropriate cooking can be an issue when it comes to consuming a lizard. They often carry dangerous bacteria like Salmonella and E. coli. From a human perspective, lizards do not provide much meat and tend to be lean, but they do provide important nutrients. In areas where iguanas are plentiful, it is common for people to hunt and eat them. For example, in Nicaragua there were serious food shortages as a result of severe droughts in 2014. During this period, iguanas were a critical food source.

Which animals will eat lizard eggs?

Pretty much every animal on our list today will also eat the eggs of lizards which can be considered a protein-rich food source. In addition, carnivorous insects will actively search for and eat lizard eggs. People in some areas of the world consume lizard eggs as a delicacy.

Which animals will eat dead lizards?