There are 29 different species of rabbit within the family Leporidae (not to be confused with hares in the genus Lepus). These small, fluffy mammals can be found in a range of habitats worldwide, digging burrows in the ground and foraging in open meadows, forests, deserts, wetlands mountainous areas, and scrubland.

Rabbits are part of the staple diet for some key predators including foxes, bobcats, large birds of prey, and weasels. They are also consumed by more occasional predators like snakes, raccoons, and wolves. There is also a successful rabbit farming industry worldwide to provide humans with rabbit meat.

The fact that rabbits are such an important source of protein for many predators, control low-growing vegetation and improve plant diversity, help to improve soil fertility, and provide shelter for insects and invertebrates via their burrowing activity, make rabbits a key species in many ecosystems.

It is important to understand how and where rabbits fit into the food chain in different types of habitats. This is especially critical considering almost half the rabbit species in existence are vulnerable to extinction. Here, we will explore some of the main rabbit predators around the world…

But first of all, before we look more closely at rabbit predators it is useful to explore the way in which rabbits defend themselves from predators. One of their most important defenses is the incredible hearing they possess thanks to their characteristically long ears. Their long, powerful back legs enable them to spring away from danger at high speed. They use a zig-zagging, random pattern when running away from a pursuing predator, intended to confuse their pursuer rather than to outrun them.

Digging burrows, more correctly known as warrens, underground can also be a form of defense against predators. By having a safe space to retreat into, and by sticking close-by when foraging, rabbits can avoid larger predators and birds by diving underground.

Rabbits tend to remain silent and inconspicuous, but may emit a screeching sound if surprised or caught by a predator. This can be enough for a predator to drop its quarry in alarm, giving the rabbit a chance to escape.

All species of rabbit have fur in shades of brown or grey, helping them to blend in with their surroundings. This is particularly useful in evading aerial predators like hawks. In snowy climates, rabbits’ fur may turn white during the winter, helping them to blend in with the background. This is a disadvantage, however, in areas where snow fall and snow melt is inconsistent, and can lead to rabbits standing out rather than blending in. This is a particular concern with the changing climate in many areas.

There are a whole host of animals which eat rabbits. For some, rabbits form a critical component of their diet. For others, rabbits are eaten as a supplement to the main diet. For others still, rabbits provide a rare, opportunistic snack. 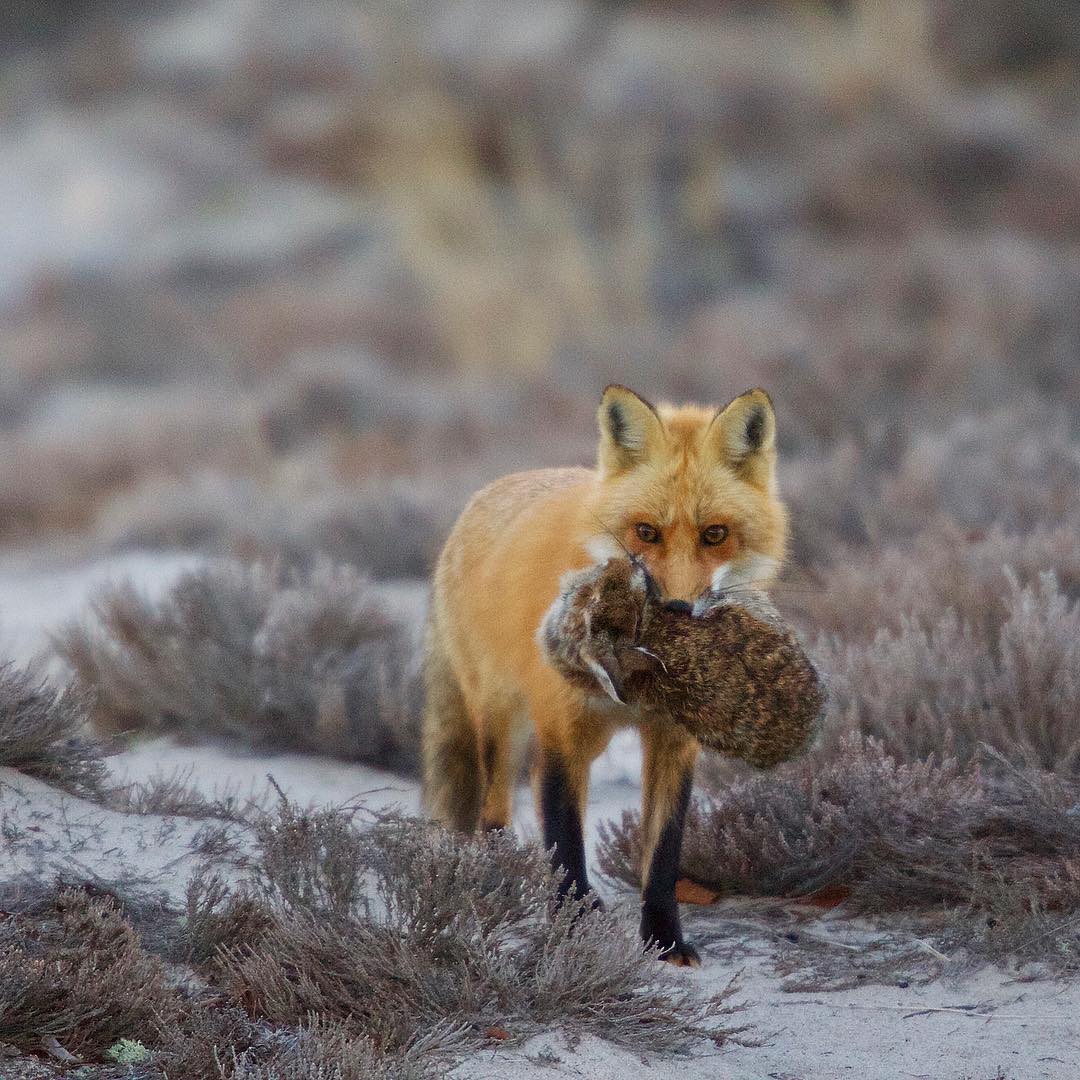 Some predators are more active during the night, coinciding with a rabbit’s most active period. Foxes are one of the primary rabbit predators in many areas where the two animals coexist. In a range of environments Red foxes will be a rabbit’s main predator. In a desert environment, Fennec foxes may take young rabbits, and in cold, Arctic regions Arctic foxes will prey upon resident rabbits.

Many owl species are nocturnal and employ a sit-and-wait hunting technique. With their incredible eyesight and hearing, they make very effective rabbit predators, especially as rabbits are also most active at night. Smaller owls like Screech owls are only able to take young rabbits, whereas larger owls like the Great horned owl are easily able to snatch an adult rabbit. In fact, rabbits and hares form around 75% of a typical Great horned owl’s diet. 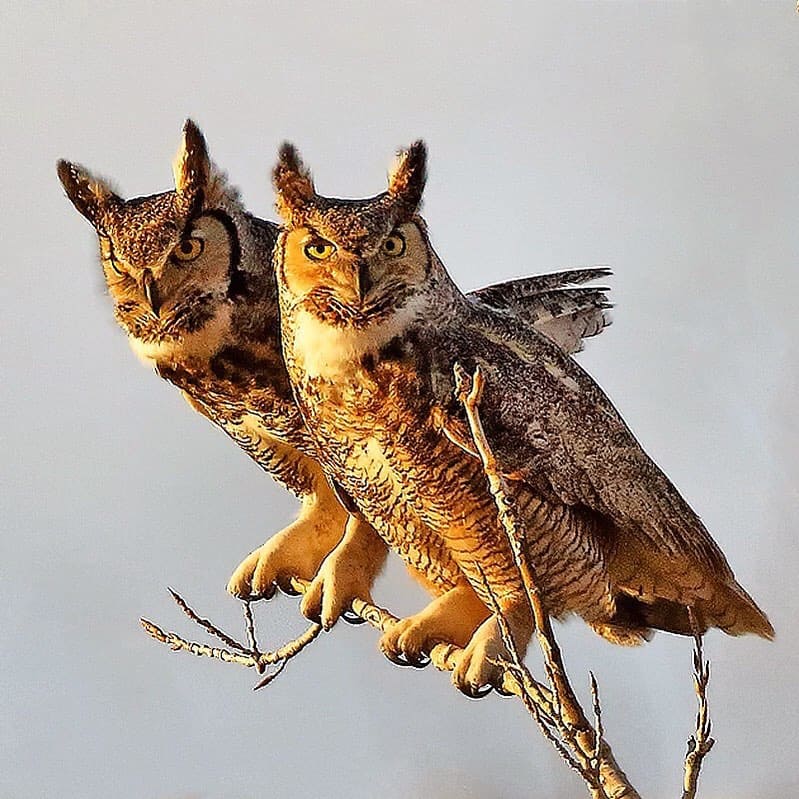 These large and powerful birds of prey are often associated with eating rabbits, especially species like the Golden eagle or Bald eagle. Many other birds of prey like hawks and falcons will also prey upon rabbits, usually when they are out in the open, foraging in grasslands. Larger birds of prey can grasp a rabbit with their strong talons and carry it straight off the ground. Others will attempt to immobilise the rabbit and pull it apart into manageable pieces once dead.

Corvids like crows and ravens will also take the opportunity to eat a young rabbit if they can. This can sometimes happen during spring when young rabbits start to venture out and about and may get separated from their parents.

Canids (dog-like species) are common in many of the same areas as rabbits, and hence their paths cross often.

Although wolves mainly concentrate on larger sources of food like deer, wolves will also occasionally catch rabbits to supplement their main diet. This is observed especially when other food sources are scarce, and rabbits become more of a guaranteed meal. Usually wolves hunt in packs but individuals will hunt rabbits alone.

Dingoes are some of the main predators of rabbits in Australia. Dingoes mostly occupy areas of woodland, grassland and rocky or scrubby terrain because these are the areas in which rabbits can be most commonly found in Australia. Similarly to wolves, dingoes mostly hunt in packs but will stray from the pack to hunt a rabbit alone.

A coyote’s main diet consists of smaller mammals, but they are very opportunistic animals and take advantage of many food sources. Consequently a coyote would eat a rabbit, but it would not rely on rabbits as a primary food source.

There are several smaller big cat species which commonly take or even rely heavily on rabbits as a food source, these include bobcats (lynx) and ocelots.

Bobcats mostly live in northern parts of the northern Hemisphere. They can usually be found in forests and at higher altitudes where prey can be scarce. As hardy animals, rabbits can also survive in these habitats and hence form a large part of a bobcat’s diet. Often an individual bobcat will employ a sit-and-wait technique, positioning themselves in an advantageous spot and simply waiting for prey to wander close-by. When their young become old enough to being hunting, mother bobcats sometimes teach their young to hunt by stalking and chasing a rabbit together as a family unit.

Endemic to South America, ocelots are usually lone hunters and rely on rabbits as an important part of their diet. Being a little larger than a domestic cat, they are well able to catch and eat a rabbit alone.

Although big cats like lions and tigers coexist in the same environments as rabbits, they will not often consume rabbits as a main part of their diet. Usually hunting and eating a rabbit will be supplementary and only happen if a good opportunity arises. A rabbit is a pretty small meal to a big cat so usually not worth spending precious energy on catching unless there is a shortage of other prey. As slightly smaller big cats, leopards are more likely to actively hunt for rabbits.

Wolverines have a very diverse diet and can be fierce predators. They include rabbits in their diet and will even dig into their burrows to access rabbit prey.

Although small, weasels are active and agile predators and can take down prey larger than themselves. They will commonly catch Cottontail rabbits which are considerably larger than them, killing them efficiently and quickly by breaking their necks with their strong jaws.

Similarly to weasels, stoats are small but strong. When hunting prey like rabbits, they form packs whereby one stoat will distract a rabbit’s attention while the others hunt it from behind.

Raccoons are opportunistic omnivores and prefer to hunt slower-moving prey. A rabbit would not usually be on their menu unless it was very young, old, or injured.

Do Snakes And Lizards Eat Rabbits? 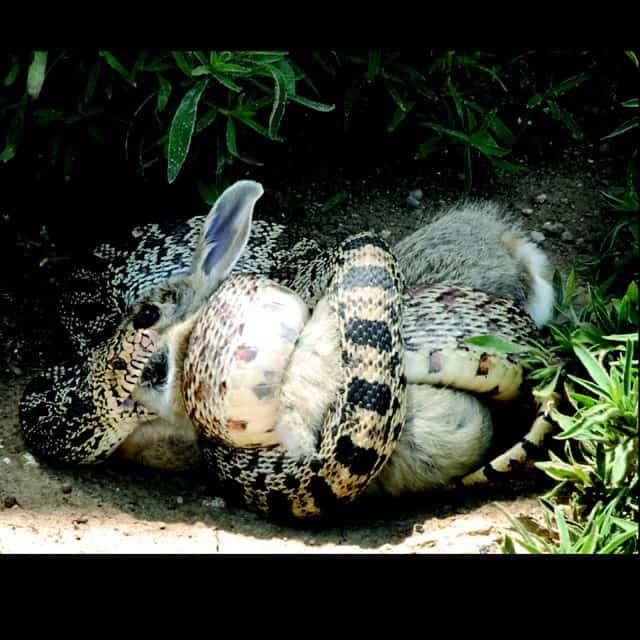 A snake’s diet depends on it’s size, so larger snakes will definitely be able to consume rabbits, especially snakes like pythons, boas and anacondas. Snakes will swallow a rabbit whole, unhinging their jaws in order to manage larger individuals.

Large lizards like Komodo dragons and Iguanas may also hunt and eat rabbits if they can catch them. A slightly smaller species, the Monitor lizard, consumes rabbits as a key part of their diet.

Do Cats And Dogs Eat Rabbits?

In urban setting or rural areas with urban populations living nearby, it is common for domestic cats and dogs to hunt rabbits, especially baby rabbits. However, it is advised to prevent your pets from hunting rabbits partially for the rabbits’ sake, but also because rabbits can carry diseases which can be transmitted to pets and even people.

There is plenty of fossil and archaeological evidence of humans hunting and eating rabbits since between up to 2.6 million years ago (the Pleistocene Epoch). Researchers think rabbits were domesticated very gradually over time by humans for both their meat and fur from around the first century BCE.

Nowadays, there are over 50 different breeds of domestic rabbit worldwide. Some are used more as pets and some as meat. There are thousands of rabbit farms worldwide. China is by far the biggest producer of rabbit meat, while Italy, Venezuela and South Korea are the next biggest producers.