You’ve heard of and you’ve seen the stunning, colorful peacocks. Indian and Green peacocks are the most common across the world, so if you’ve seen one of them, you know that a male peacock is an incredibly beautiful bird. The colorful feathers, the impressive fan and tail, metallic shine, and iridescent finish make peacocks some of the most incredible animals on our breathtaking planet. They’re referred to as ‘the king of the birds’ for a reason.

However, there is one thing more breathtaking and spectacular than a regular peacock; a white peacock.

Now, white peacocks are a rare but unforgettable sight to behold. The spectacular white peacocks are actually males, also known as peafowls. The female peacocks, of any kind and color, are referred to as peahens, and the small, little cute peacocks babies are known as peachicks. Now that we know the whole family tree of the peafowls, let’s take a closer look at the white variation of this majestic animal and see how it comes to be, where it lives and what it symbolizes. So, without further ado, let’s get started!

White Peacocks: Everything You Need Know 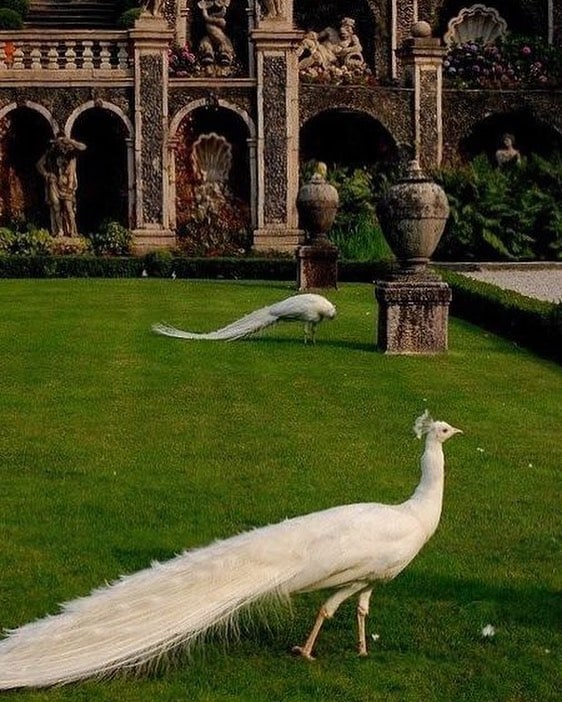 Origin of the Color – Why are They White?

Now, how is it possible we have white peacocks? Well, the most common explanation for this is usually animal albinism, which is a condition in which cells can’t produce melanin, or the pigment needed to color the skin, eyes, hair, feathers, and scales in animals. Albinism, of course, can appear in humans too. But, when it appears in animals, the animal is often white or pink.

However, when it comes to white peacocks, albinism isn’t really the cause of their color change. Actually, white peacocks have a genetic mutation known as leucism. Now, this is a condition in which there is a reduced pigmentation in feathers, hair, and skin. The condition simply prevents the pigmentation to stick to the feathers, hair, or skin. Leucism is predominant in birds, and as a result, their feathers end up looking pale, white or washed out. 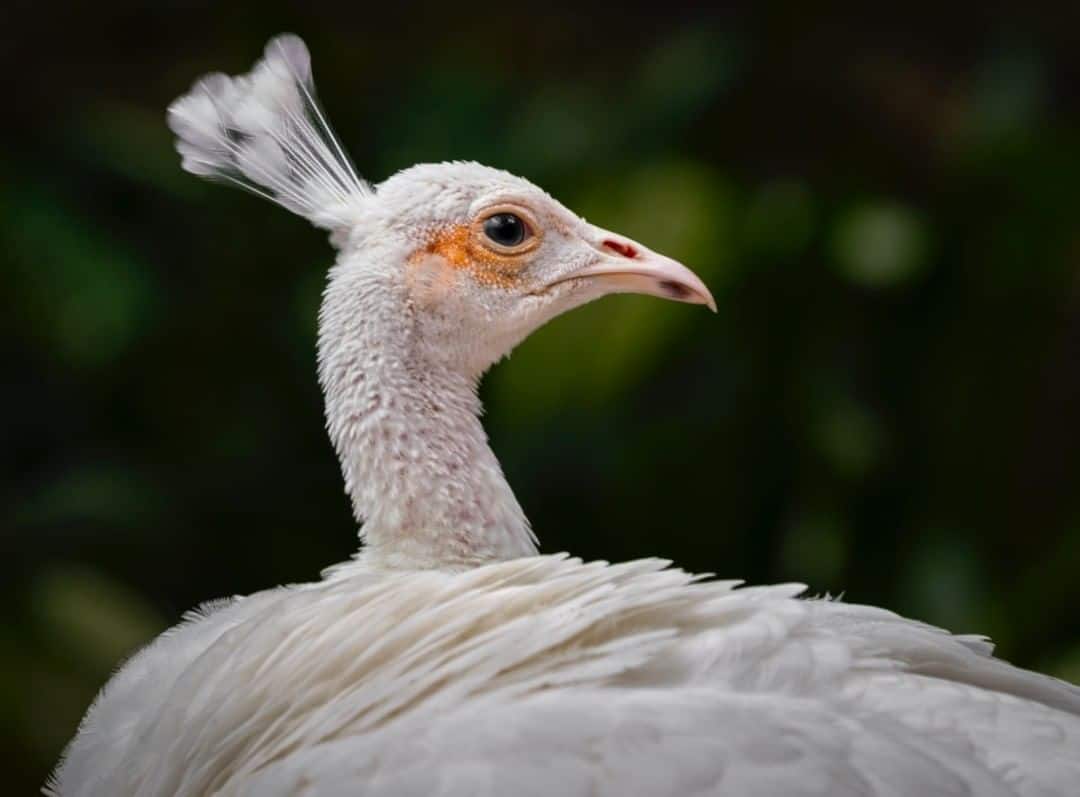 Now, white peacocks are actually blue or Indian peacocks that have this unique genetic mutation that makes them look white. These peacocks, from the very birth, experience pigmentation loos. They’re born as yellow, and as they grow up, the yellow is washed out and the peacocks end up white as they mature.

However, you shouldn’t be confused; albinism can still appear in peacocks too. Albino peacocks are really rare, even when compared to white peacocks. Even if you do see a white peacock in your life, chances are it won’t be an albino peacock. That’s how rare they are.

The earliest and most known peacock mutations have occurred in Indian peacocks. The mutations appeared as Black Shoulder mutation, followed by white and cameo peacocks. These mutations can also combine in one peacock, which results in different color combinations and unique patterns. White and Camo patterns seem to be the most common combination of mutations in peacocks, which make them look rather impressive and stunning.

So, Are White Peacocks Rare? 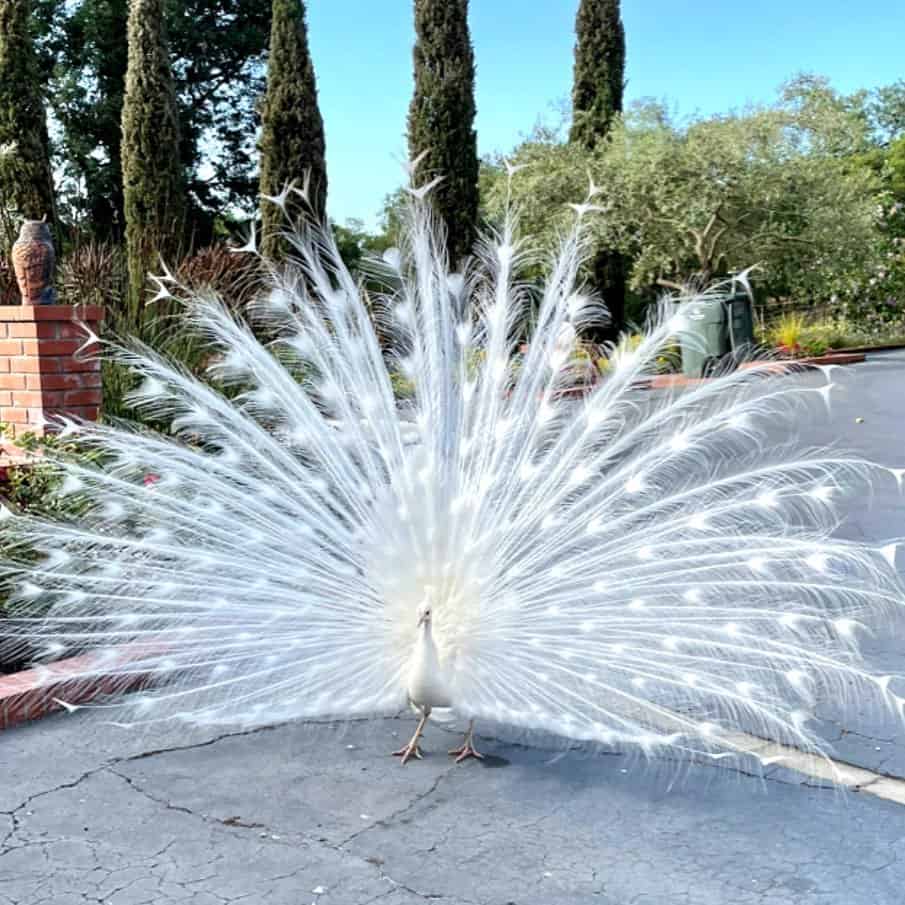 Where Do White Peacocks Live?

Indian peacocks live in the area of Southeast Asia, and countries like India, Sri Lank, Thailand, Vietnam, etc. They can also be found in the Congo Basin in Africa, but are known as Congo peacocks and are characterized by less abundant feathers and tails.

Can I Buy a White Peacock?

Yes, white peacocks can be acquired for a price up to $1500 from established breeders. However, that’s about all of the information we’re going to provide in regards to this topic. White peacocks, that are being sold, live in captivity, eat food they wouldn’t normally eat in the wilderness, and generally lead sedentary lifestyles.

These peacocks are at risk of diseases and generally live lives not intended for peacocks and peahens. We definitely urge you to refrain from such a purchase, but if you do wish to own a white peacock, you’ll have to consult the Internet for needed information.

Is There a Symbolism to White Peacocks?

Generally speaking, white peacocks have a religious symbolism, which of course varies from one religious belief to the other. Here’s a quick insight into different white peacock symbolism; 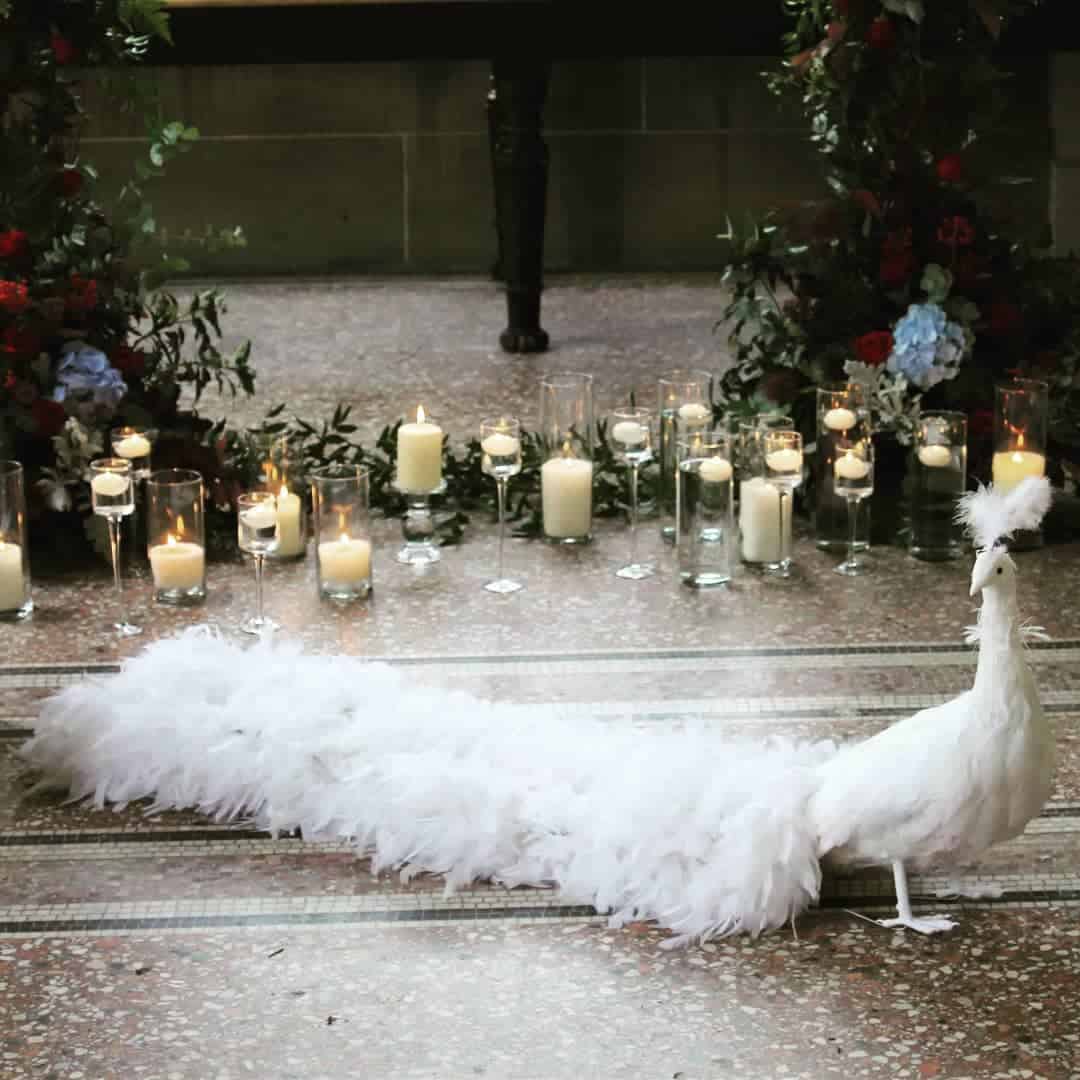 Generally speaking, from ancient Greece and Persia to the modern interpretation, white peacocks symbolize everything, from royalty, immortality (as believed that peacocks do not decay after death), joy, creativity, purity, protection, and so much more. Historically, white peacocks have also symbolized eternity, unconditional love, and even angels. The symbolism can surely move away from the religious to personal as well, depending on how one interprets the history and meaning of this animal for oneself.

The world has known, and even nowadays only recognized the three main types of peacocks; Indian (Blue), Green, and Congo peacocks. However, genetic mutations have shown a wide variety of peacocks feather colors and patterns, leaving us all stunned and in awe with these incredible birds. White peacocks especially make an impressive sight to behold.

It isn’t really strange that so many people want to breed or buy white peacocks. After all, they symbolize, royalty, luxury, uniqueness, and one-of-a-kind-ness. And, people want anything and everything that is rare and a potentially priced possession. However, people owning or breeding white peacocks generally see them as some kind of a trophy they possess, which is incredibly sad,

These breathtaking animals generally live in captivity and cannot enjoy the beauty of life to the fullest. So, if you’ve read this article for the purpose of buying white people, we would surely urge you to not buy peacocks of any kind, and simply enjoy their beauty from a respectable distance.