It is pretty unusual to hear birds chirping in the middle of the night. All sorts of stories and beliefs have formed around this unusual yet beautiful night habit of some birds.

In this article, we will discover the real reasons why some birds might be singing outside of their natural active period, the spiritual meaning, beliefs, and superstitions that have formed around this phenomenon, and a few examples of birds that enchant the night with their calls.

Why Do Birds Chirp At Night?

We would be tempted to say that hearing birds chirping at night is usual since there are nocturnal birds as well as diurnal ones.

But the night birds, such as owls, for example, do not exactly chirp do they?

Night birds’ singing is more of a hooting or screeching sound, while the diurnal birds have more melodious chirping. So what is happening when you hear diurnal bird calls during the night-time?

Let’s try to understand what’s going on with the diurnal birds when they switch from sleeping to singing in the middle of the night.

Some bird species are active during the night, and hearing them chirping at late hours is not that unusual. The reasons for which birds chirp at night could vary depending on the birds’ habits and needs.

The birds’ inner clock, just like the other animals’, functions according to the day/night cycle. In cities or other human areas where there is light all night long, birds’ sleep cycle could be affeced and they may become active and sing when they are meant to be asleep.

Continuous streetlights (light pollution), for example, could trick some birds into believing it is dusk light and cause them to remain active.

Another two factors that could interrupt birds’ sleep are loud noises or movement in their nearby surroundings.

Like any other animal, birds will wake up and call the alarm if noises awaken them or their perching place is disturbed.

Birds would interrupt their rest and start chirping if they were woken up by intense noises like thunder, gunshots, and fireworks, or during an earthquake.

A wide variety of predators and dangers are lurking in the darkness, and birds chirping at late night hours could be due to the presence of a predator nearby or even a potential attack.

In such a situation, the birds chirp to warn the other birds about the danger or ward off the predator.

Although limited only to the months of spring and fall, some migratory birds will break the silence of the night with their chirping.

Some migratory birds fly primarily at night, using the stars’ position to travel, and the chirping they make during this process is called “flight calling”.

The flight calls have the role of helping the birds to keep safe and close to the flock when passing over new, unfamiliar areas.

Not all the birds that chirp at night are adult or traveling birds, though. Sometimes it is baby birds who could be chirping.

The nestlings could be simply practicing their singing, imitating their parents’ songs, and learning how to communicate.

Another reason baby birds would be noisy and chirping in the night-time could be because they need something, like all babies: hunger, discomfort, fear, cold, etc.[1]

Is It An Omen When Birds Are Chirping At Night?

Some people perceive bird song at night as a gift from divinity for humanity; hearing daytime birds singing in the night-time can be taken as a hidden message from divinity.

It is believed that, because of the busy daytime noise, some messages from the higher realms cannot reach their earthly consignee.

Therefore, to assure the messages pass through, they are sent in more silent moments like the nigh-time hours.

Birds Chirping At One O’Clock

The so-called “first call” in the spiritual world is hearing a bird chirping at one o’clock in the morning. It’s the equivalent of a missed call: the Universe wants to get someone’s attention as something is about to happen in their life.

During the first call, one should be paying attention to as many details around them as possible: where they are, with who, in what they invest most of their energy in, the plans they have, and so on.

These details could reveal what the Universe is trying to transmit, related to the coming changes. The first call is meant to wake a person up and make them pay attention to signs.

From another angle, hearing birds chirping at one o’clock in the morning could signify that the listener is protected in their sleep; it is said the protective effect will last for the entire following day.

If the first call was more of a missed call, hearing a bird chirping at two o’clock in the morning, the so-called “second call”, has more energy behind it. They type of call you get from your mother after you have been ignoring her messages for a week.

No matter which bird is singing, the reason for it, or how beautiful the song is, the message is that one has been ignorant of the spiritual signs they have received lately.

The witching hour, the darkest of them all, the hour when all hexes, evils, charms, and curses are performed (well, you get the point).

It is not a good sign, and neither are the messages it carries: if one hears birds chirping at three o’clock in the morning, the spiritual teachings say it’s a warning that someone close to the listener is in danger in some way.

It would be wise to check in with the loved ones as soon as possible after hearing a bird chirping at three o’clock in the morning, to make sure everyone is ok.

Due to the hour’s high energetic charge, hearing a bird chirping at three in the morning could signify the possibility of communication with a loved one who has passed away, for the “veil between realms” is thinner.

Other Meanings Of Birds Chirping At Night

If one has trouble reaching success, it could be due to focus outside their innate talents and skills.

A chatty bird outside the window signifies that the listener should turn towards themselves and, just like birds, “fly with the wings” they were born with.

The message is to start investing time and working at their natural gifts in order to succeed.

According to some beliefs, deceased loved ones could take the form of birds to announce their passing away to those that are not close to them physically.

Otherwise, birds chirping at night could mean the passing away of someone close especially if the chirping occurs around three o’clock in the morning.

If one is so caught up in their day-by-day drama that the Universe must wake them in the middle of the night to transmit a message, most likely that person feels trapped.

In this kind of situation, the annoying chirping that won’t let one sleep is precisely the symbol of something they crave: freedom.

So, instead of getting annoyed and throwing with the pillow out the window to stop the chirping birds, one should use the night’s silence and the bird song’s magic to reflect on what is causing the problem.

Blockages that hold one in place are usually only in the mind, and the birds keeping you awake is the Universe’s way to indicate that the listener has the power to be just as free as the birds.

If one has been suffering a lot lately, for any reason, starting to hear birds chirping  in the middle of the night could signify an urge from the Universe to let the pain go.

The messages sent by the Universe through the birds is that, no matter who wronged them or how unforgiving the pain is, it is necessary to evolve to become successful.

It is normal to have periods of stagnation now and then, rest periods, or simply a break from time to time.

Still, when one has remained at the same level for a too long period, the appearance of birds chirping at night is very likely to symbolize the necessity of a new step forward.

When someone feels stuck, noticing birds chirping at night signifies an urge to overcome the fear of the unknown and move to the next, higher level with faith.[2]

Examples Of Birds Which Chirp At Night 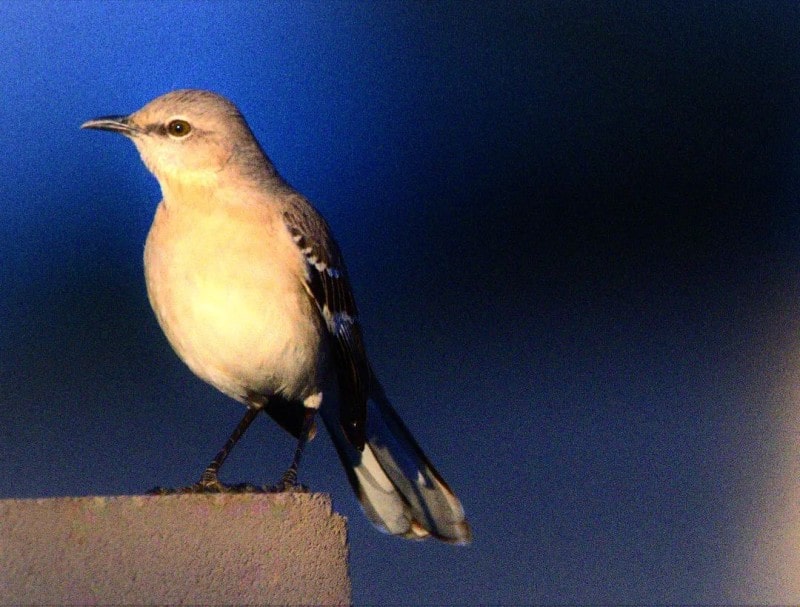 The northern mockingbird is a nocturnal bird that takes great joy in singing its songs – it learns and mimicks other birds’ songs.

The mockingbird male can learn up to two hundred songs during its lifetime and will take great pride in impressing other birds with their singing skills. 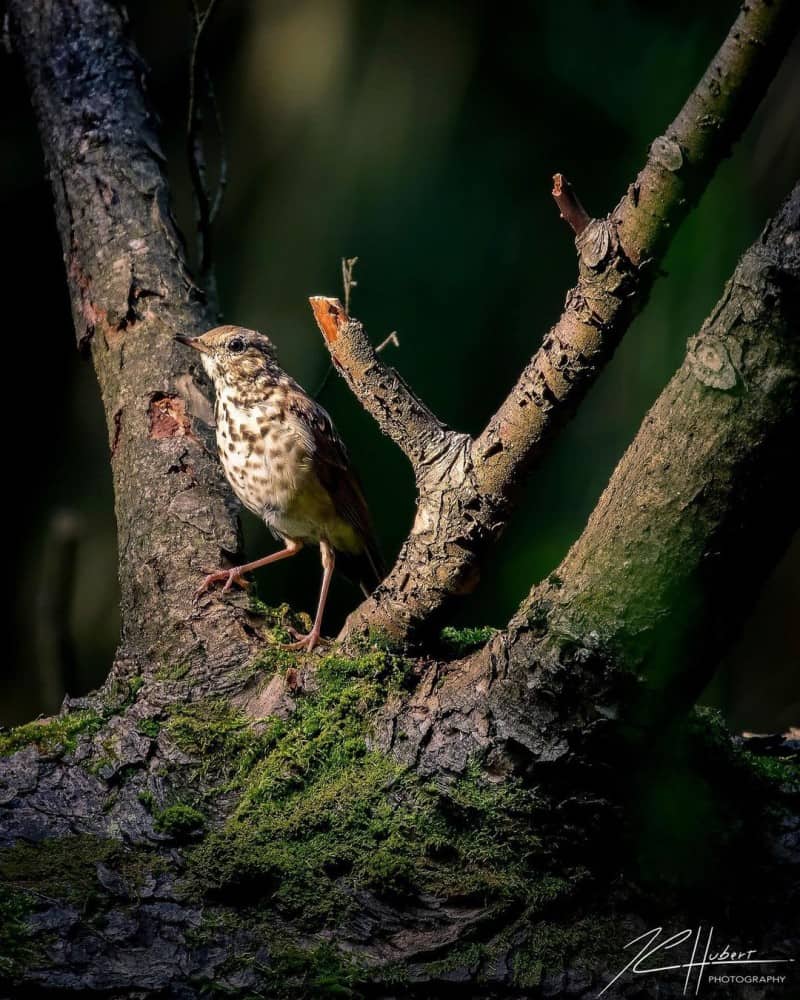 The hermit thrush is a migratory bird who’s whistles and chirps can be heard late in the evening or very early dawn.

The songs of the hermit thrush extend until late night in the spring and fall, during their migration times. 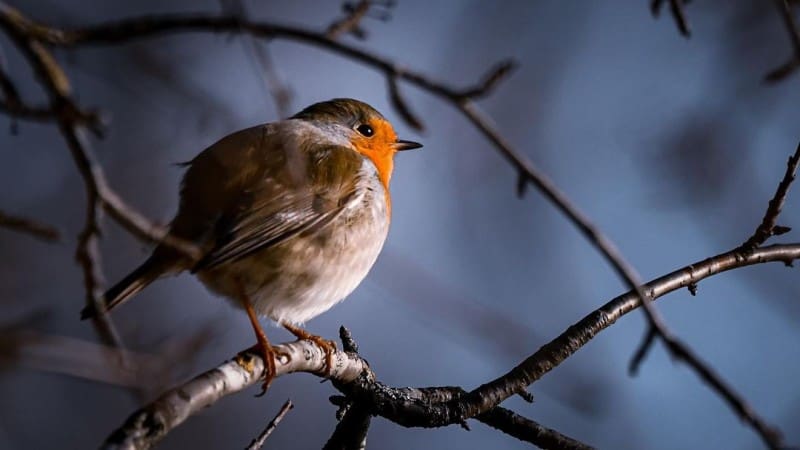 The normally diurnal robin is one of the birds most affected by urbanization, sound, and light pollution.

Not only do the urban lights keep the robin awake and singing at night, but so does the daytime noise pollution that forces the bird to sing at night when it’s quieter.[3]

I have maNY sparrows living with In a huge Rhododendrun flower bush. 2 nights now these birds started singing..first night at 2:30AM. And tonight at 1:30AM they started all over. I'm not use to ever hearing them this late at night. Could they be disturbed by the city lights? Here they go again!. I love them, but worried for their well being . just wondered if they will be ok!? Thank you, Penny