Crows, those cawing black birds that are found all around the world, have been captured on film trying to attack hawks in flight or even stationary.

If you know anything about hawks, you’ll know that they can be dangerous predators in the bird world, reaching crazy high speeds as they dive down to catch their prey. Some hawks, like the sparrowhawk, will attack other smaller bird species (which is a big hint) while most will feast on small vertebrates such as mice, squirrels, and maybe a small rabbit or two.

So, why do crows feel like they can take on these raptors?

To answer the question, let’s first look at the relationship between hawks and different crows.

While the adult crow is intimidating and even a symbol of death in some spiritual cultures, baby crows (more accurately called nestling crows) are these very cute and fluffy black birds. They are most often referred to as nestlings when they are covered in soft black down rather than fully grown feathers.

Nestlings hatch in the early summer months, when the temperature starts to warm up. Depending on the natural climate of your location, that may be in the late spring months or all the way into June.

But they aren’t just cute chirping birds… they are also prey for hawk. Most bird of prey species in the hawk family will take advantage of unprotected nests and swoop down to catch the nestlings. It’s an easy meal for them, so why not.

The nestling crow is no match for the fully grown hawk.

Here you can see a video that demonstrates a bunch of crows mobbing a hawk that appears to be eating a smaller bird it has caught as prey. Despite the low quality of the video, it clearly shows the behavior of the hawk and the crow.

Adult crows mob together and attack birds of prey!

If you look in terms of stats, a single crow is completely dominated by the hawk. Here’s what a one-on-one fight looks like in numbers, if we compare the common American crow with the red tailed hawk (one of the most common across most US states):

The hawk is a bigger and more powerful bird with a wide wingspan – this makes it easy to spot against a mob of crows in the sky. However, the hawk may not be able to out-fly the mob of crows. The pace at which it flies in along is quite slow and you often see them gliding rather than moving their wings to fly about. The real power of the hawk comes when it needs to dive. It can reach speeds of 120mph as it dives down to catch prey.

Nonetheless, the length of a crow vs hawk is quite similar and in that respect their sizes aren’t all that different. When you have a mob of crows, whether it’s three crows or ten crows, the hawk can be attacked. It’s even possible that the mob of crows will kill the hawk by jabbing and pecking it to death (if it doesn’t get away).

There really is strength in numbers!

So, Why are Crows Mobbing Birds of Prey?

The answer should be fairly obvious now. The crows know that hawks eat their young, so they attack hawks that invade their territory. This may just be for protection, to prevent the hawk from attacking any young nestlings they are currently raising.

However, crows are an intelligent family of birds. Some species are known for using tools, recognizing human faces, and they’ve been used by researchers and scientists for decades. There’s even evidence that crows are self-aware, just like humans. Researchers found that crows have 1.5 billion neurons in their brains, which means they may be more mentally capable than monkeys and great apes.

So, this opens a whole new door. It’s possible that the family of crows (yes, the mob of crows may be a social group rather than a group gathered for convenience) attacks hawks as revenge for previous nestling deaths in the past.

It also helps to explain how the mob of crows manage to take down a hawk and kill it. While the hawk is slower, you assume that those talons could help it fight its way out. But while the hawk is all about brawn, the crows have the brains needed to develop a strategy and win. 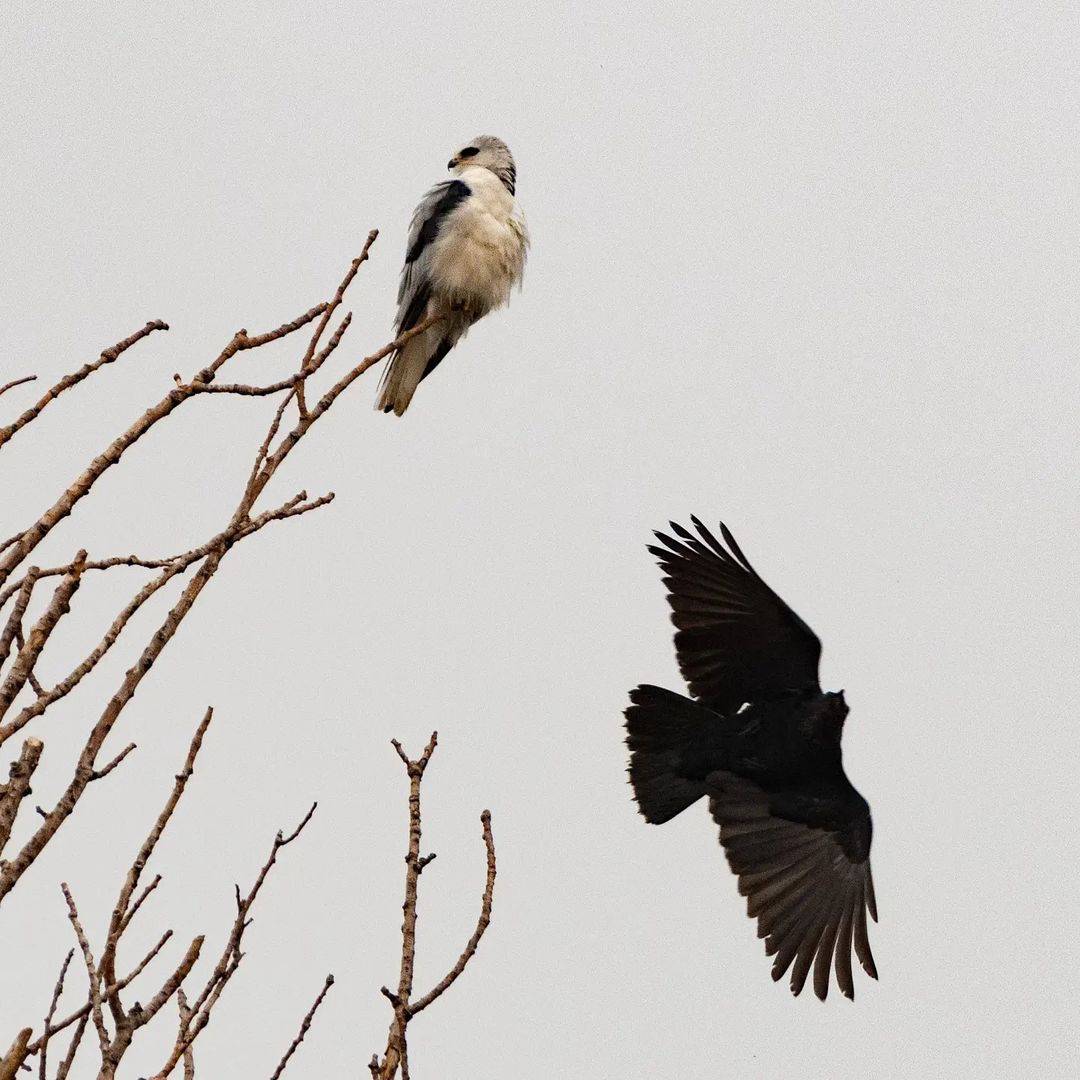 It’s not all fighting and death, however. Like many species in the animal kingdom, some crow species can actually develop a “friendship” with humans. It’s hard to determine what is anthropomorphism and human wishful thinking, and what is actually a bond between an animal and a person. It could just be that crows are friendly to humans to get something they want.

That something they want is usually food. As Pet Helpful explains, the best way to make friends with a crow is to offer it a food that it likes. It may take you a while to find the food that it likes, but once you do, you can set up a schedule.

The key is to not feed the crows so often that they become dependent on you for food. You should also keep your distance and throw food away from you. Don’t expect crows to eat off the palm of your hand. Crows are wild animals and quite skittish – this is no Disney movie.

You should also be aware that trying to tame crows and keep one as a pet is illegal across most of the US. While you can develop a friendship where they come to you semi-regularly for food, you cannot take it further than that.

Above all, remember that they are wild animals and show some respect!

To summarize, adult crows will attack hawks in a mob, especially if the hawk enters their territory. This is because hawks can prey on the crow young (the nestlings). A single crow is outweighed and outpowered by a hawk, however the crow is faster when flying in a straight line and it has far superior intelligence.

These traits enable a mob of crows to take down a hawk and even kill it. There are also stories of crows taking down even larger birds of prey, including eagles.

What does it mean when a crow attacks a hawk?

It usually means that the crow is aware of nestlings in the area, and it is attacking the hawk to get it out of the territory and away from the young. It may also attack as revenge, if the hawk has already preyed on the crow nestlings.

Why are hawks afraid of crows?

Although crows are smaller and less powerful physically, a mob of crows can take down a hawk and peck it to death. When they work together, a mob of crows is intelligent and agile.

Yes, crows can kill hawks. It usually takes a mob of several crows to take down a hawk. One on one, the hawk is more powerful. Crows have even been known to take down eagles.

Do crows attack for no reason?

No, crows won’t attack you for no reason. They are skittish, so if a human approaches them they may just fly away. However, crows may attack or at least squawk at humans if they are protecting their young or territory. Crows can remember faces, so if you’ve threatened a crow before it may remember you and attack.

Crows can be violent when they feel threatened, which is not at all unusual. Most animal species will also attack you if you threaten them, their territory, or their young. Crows are particularly violent to birds of prey, such as hawks, and rarely attack humans. You have no reason to be scared.

Why do crows get angry?

Anger is a human emotion. It’s more likely that the crow acts angrily because it is protecting something – usually territory or young crow nestlings. Crows can also remember a threatening human or other creature and may appear to attack it randomly, but there will be a reason behind it all.

How to Befriend Crows (Pros, Cons, And Tactics)

Eagle vs Falcon vs Hawk: Identifying and Comparing (Ultimate Guide 2022)

What Do Crows Eat: The Feeding Regimen of Crows