Most of us think that the Owls are only nocturnal birds, meaning they are active, hoot, and hunt during the night.

So, imagine some people’s confusion when they hear hooting during the daytime: most of us think it might be a diurnal bird mimicking the owl’s hooting.

That might be correct in some cases (we will be talking later about birds that imitate the hooting sound), but the truth is that Owls themselves hoot in the daytime.

The color of the Owl’s eyes can indicate which time of day the bird hunts: diurnal Owls have bright yellow eyes, nocturnal ones are black or dark brown, and the crepuscular Owls have orange irises.

In this article, I invite you to discover five species of Owls that hoot in the daytime and the reasons why they do so.

Reasons Why Owls Hoot During The Day

Hooting is one type of communication that Owls eomploy, and, using various notes, they express different messages and needs.

For example, the hooting of a male Owl is shorter and calmer during mating and much noisier and extended when the bird wants to attract a mate.

Usually, the gender of an Owl can be identified because there are specific hoots produced by males and females, but some Owls sing in duets (a fast, short, and strident call that both partners produce simultaneously).

Owls “greet” each other when they meet, making a brief tonal sound, announcing to the “host” the arrival of their “guest”.

If two Owls meet, they will start by hooting aggressively, but if they know each other, the birds will decrease the aggressive tones (an owl can distinguish another owl by hooting sounds).

When Owls claim a particular hunting territory, they use hooting to announce their newly acquired domain, similar to the way in which wolves use howling to mark their territories.[1]

The hooting associated with territorial claim is aggressive, noisy, and long. The bird hooting from the depths of its territory aims to tell  other Owls to avoid encroaching on their space.

Given that some Owls are territorial only during nesting and breeding season, to protect their eggs and younglings, they also hoot to drive other animals, including predators, away from their territory.

Although hooting helps bypass physical conflicts and fights, the Owls can get hostile and very bold when defending their nest. There are even records of attacks on curious humans who have stumbled too close.

The breeding season of Owls starts in the late winter or spring when males of different species will be hooting at various time during the day.

At the start of a breeding season, male Owls may have problems emitting a successful mating hoot, making odd noises instead.

The hooting is meant to reach out to a potential female. If interested, the female will respond by hooting back (but only to males of the same species).

After the male hears the “I-said-yes” hoot, he will provide the female with a nice meal and a dance on the ground accompanied by hooting and a high flight with spiral manoeuvres.

The entire display continues until it gets too dark or the female joins the male in the hooting, which signifies the pairing of the two Owls (in most cases, for life).[2]

And as an example worthy of being followed, the coupled Owls encourage closeness, and avow their bond by hooting together.

Nocturnal Owls being active and hooting during the day could be because the birds have trouble hunting or finding food in their normal time range.

In some other cases, a growing family also requires additional feeding excursions during the daytime.

For diurnal Owls, hooting is used during feeding of the owlings, when the male is leaving to hunt and the female is guarding the nest.

The male frequently makes a hoot to check in with the female. If everything is ok, the female hoots back briefly or makes a long screech if something is wrong.

And since we are talking about enlarged families, the life of baby Owls in the nest can be very fierce and competitive, the owlings constantly fighting and hooting over food, over mother’s attention, over life.

So, another reason the Owls are hooting during the day is simply that the “kids” are hungry or don’t want to go to sleep (we feel you, dear Owls).

Owls are predatory birds and, although it is hard to believe these ferocious hunters fear anything, foxes and crows, for example, could represent danger for a baby owl, or an injured or old owl.

Therefore, hearing an owl hoot during the day could be because the bird has noticed a predator heading in its direction or that of its nest.

When encountering other owls or predatory animals, Owls hoot at them. It is uncertain if these aim to scare off the intruder, warn the other owls about the danger, or simply because the intruder alarmed them.

While some Owls will just keep on nagging the intruder that crossed into their territory, most of them will leave the region after hooting at a predator.[3]

Owls That Hoot During Day

While most of the Owls are nocturnal or crepuscular, there are two species of diurnal Owls, officially recognized: 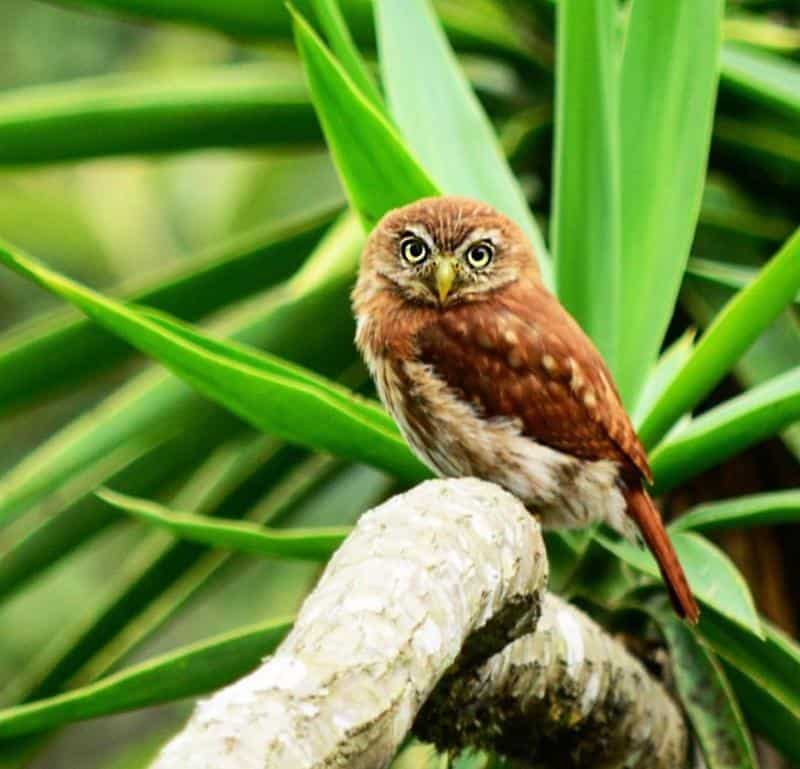 One is the Pacific Pygmy-Owl (Glaucidium peruanum), also known as Peruvian Pygmy-Owl, a diurnal species of small owl with yellow eyes, living in Ecuador and Peru.

The hoot of the Northern Pygmy-Owl varies from quick, sharp chirp to successions of high-pitched notes emitted at about 1-2 seconds intervals and often sung simultaneously by partners.

When excited, the Pacific Pygmy-Owl’s hoot can end with a sound similar to the warbler’s vocalization and turns into beak snapping when the bird encounters predators. 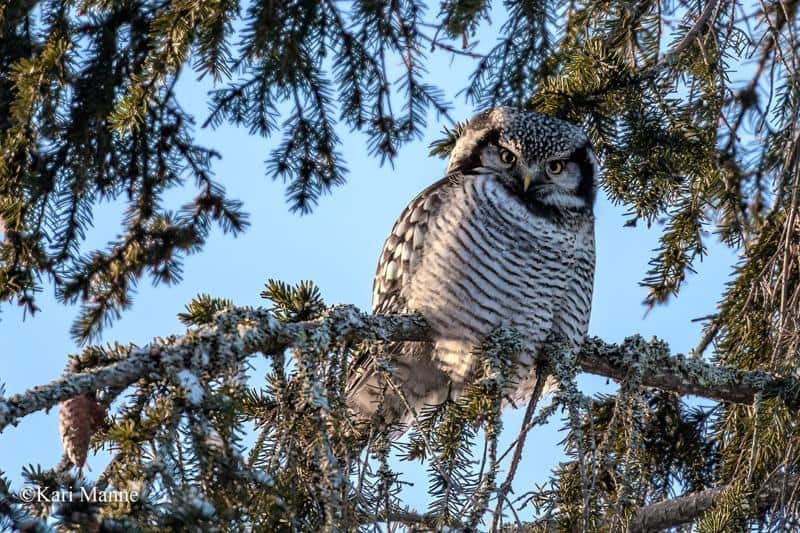 The other officially recognized as a diurnal owl is the Northern Hawk Owl (Surnia ulula), a medium-sized bird with yellow eyes found across the Northern Hemisphere.

The Northern Hawk Owl’s call hoot is a quick, purring song of 154 to 210 notes; a crescendo thrill that lasts up to fourteen seconds and ends suddenly.

The female’s answer hoot resembles the male’s, except it’s at a higher tone, and louder.

When excited, the hooting of both partners resembles the chirping of a kestrel, and the pairs salute each other with short soft sounds similar to sighing. 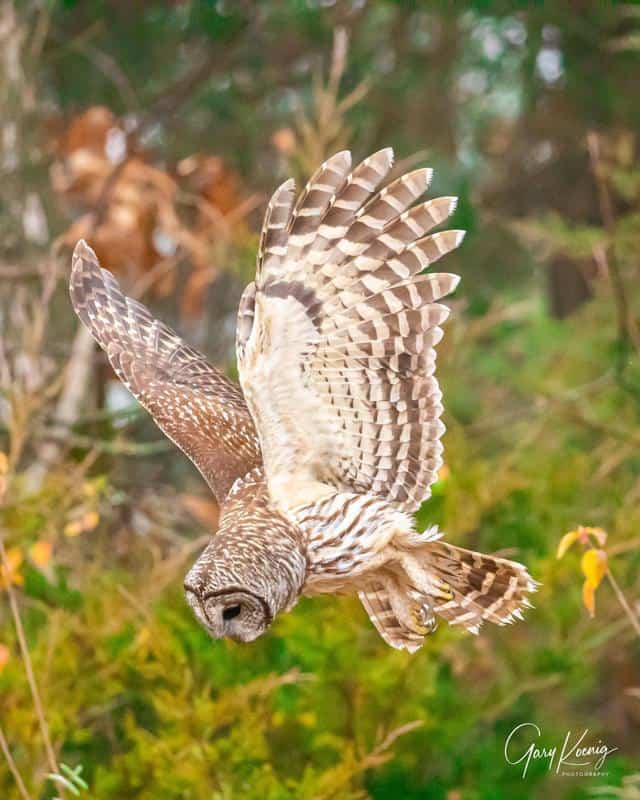 The Barred Owl (Strix varia), also known as the Striped Owl or the Hoot Owl, is a medium-sized nocturnal owl with blackish-brown eyes from North America.

However, when the night-time hunting doesn’t go so well, the Barred Owl has no problem staying active, hunting, and hooting during the day, especially if the weather is cloudy.

Moreover, the Barred Owl also becomes active  in the daytime if it hears other owls’ hooting: it could be from another raptor owl or a predator lurking around, or it could be from a human’s whistle mimicking the owls hooting.

In any case, the Barred Owl, although theoretically nocturnal, it is among the most active owls during the daytime, occupying sixth place (out of nineteen common species of North American owls) in terms of diurnal activity.

The Barred Owl is very loud, hooting both in the daytime and the night-time, with a series of eight calls and then a pause (waiting for an eventual hooted reply).

The male’s hooting is softer and lower compared to when coupled Barred Owls hoot together – their hooting can resemble monkey sounds during the mating call.

The hooting of the Barred Owl could also resemble barking or a short screech. 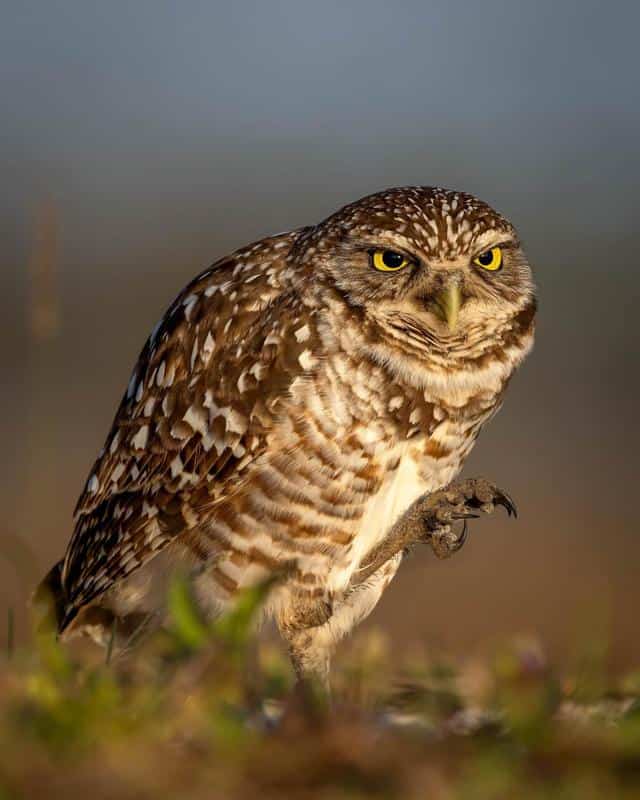 The Burrowing Owl (Athene cunicularia) is a crepuscular, small-sized owl with long legs and bright yellow-greenish eyes from North and South America.

The bird is considered crepuscular due to its hunting and feeding time. However, the Burrowing Owl stays active and hoots during the day too, avoiding only the burning midday sun when the owl prefers to take a siesta.

Like all the owls, the Burrowing Owl is a very vocal bird, with a wide variety of hootings to communicate different messages. It also emits different pitches of notes, depending on the bird’s level of excitement.

The female Burrowing Owl’s hoot is similar to the male’s, only slightly higher in tone.

When sensing danger, both male and female’s hoot sounds like an increasing, rattley screech, and they can even mimic the sound made by rattlesnakes. 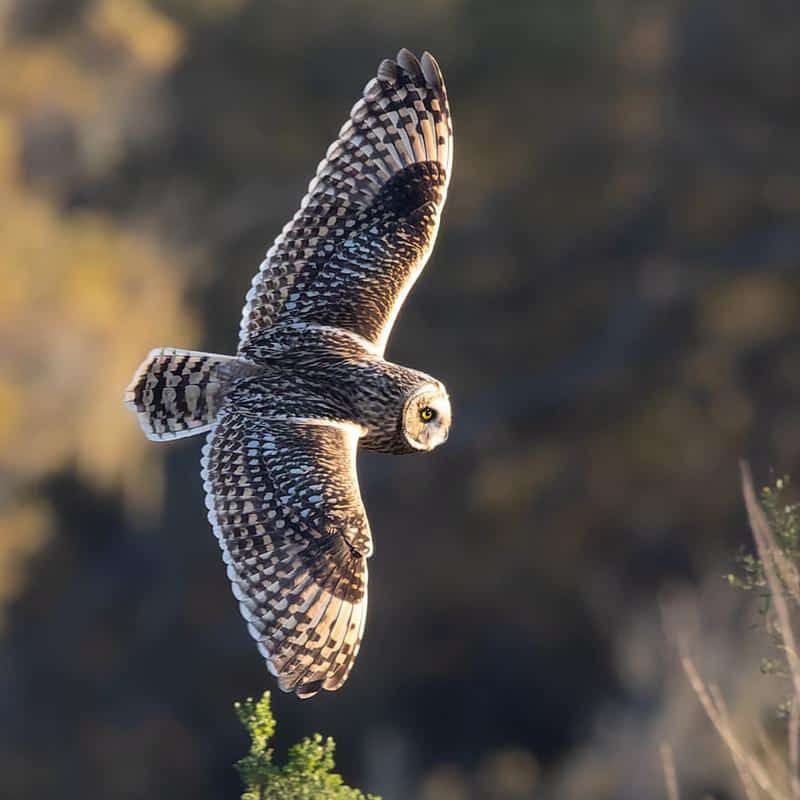 The orange-yellow eyes of the Short-Eared Owl (Asio flammeus) tell us that this medium-sized bird is a crepuscular-diurnal owl.

Active and hooting from early morning till late in the day, the Short-Eared Owl hunts in open fields all around the world (except Antarctica and Australia).

The Short-Eared Owl hunts mainly at night, although late morning and late afternoon hunting will be undertaken if the opportunity arises.

The male hoots to mark its territory with the well-known “boo-hoo-hoo”. The female’s answer hoot is a short screech resembling the bark of a puppy.

The same barking sound goes on at a higher pitch, gets hoarser, and is made by both partners when they feel frightened. 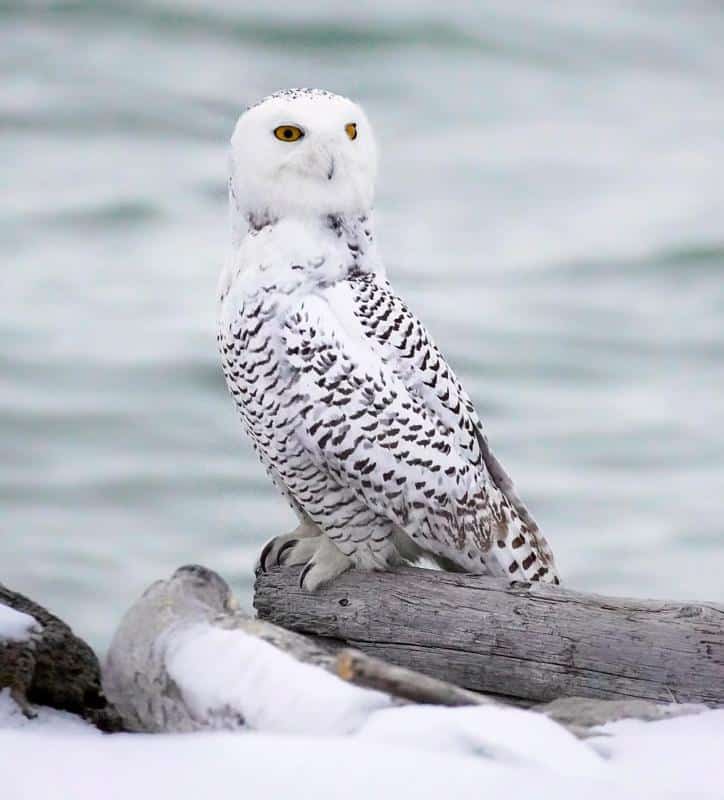 The Snowy Owl (Bubo scandiacus), also known as the Polar Owl, the White Owl, or the Arctic Owl, is a sizeable diurnal owl with yellow eyes originally from the Arctic (specifically North American and Palearctic areas).

The Snowy Owl is active, hooting and hunting during the day but mostly only during the breeding season.

Otherwise, the Snowy Owl is pretty silent because its wide-open living habitat and its diurnal lifestyle expose it to more danger.

The male’s call is a high strident rough barking that turns into a sonorous hoo-hoo-ing during the breeding season, either as a mating call or territorial warning.

Although the females rarely hoot, their warning call is a throaty vocalization similar to the ring dove’s song.[4]

Hooting is the Owl’s method of communication with various tones and sounds helping the bird express itself to other owls, warn off predators, and find mates.

Two species of Owls hoot during the day because they are diurnal, and the day is their natural time to be active.

The crepuscular and nocturnal Owls species may hoot during the day if they are disturbed, predators are nearby, or if they hear other owl sounds (from other raptor owls or a human’s whistle).

What could keep a crepuscular or nocturnal owl active and hooting during the day is if the family is getting bigger and growing (so extra hunting during daytime is required) or if the bird simply had a lousy hunting session.

White Owl Meaning: What Is The Spiritual Significance Of Seeing A White Owl? - Coachella Valley Preserve